1931 Scott 108 1/2p green & black "Kori Bustard"
Quick History
South West Africa, located between Angola and the Union (later Republic) of South Africa, was occupied in 1915, then administered by the Union of South Africa under a 1922 mandate of the League of Nations. 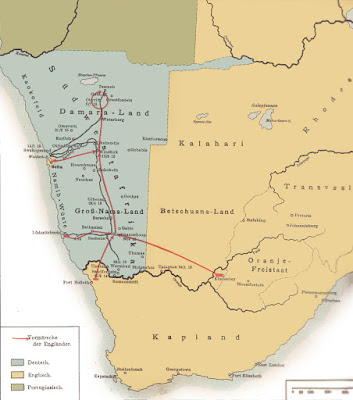 The 1915 South-West Africa Campaign
German South-West Africa had been a colony of the German Empire since 1884. It was invaded and occupied by South African troops on behalf of the British Crown and government in 1915 at the onset of WW I. (Of interest, there was sympathy for the German cause among the Boer population of South Africa, and a Boer Revolt (Maritz Rebellion) had to be put down.)

There is still much German legacy in South West Africa (now Namibia 1990), with 30,000 German descendants, German geographic names, buildings, businesses, a newspaper, and a radio station. 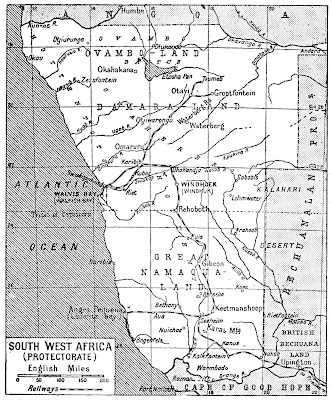 "South West Africa" stamps were introduced in 1923, using the stamps of South Africa, which were alternately overprinted in English or Afrikaans throughout the sheets.

Walvis Bay, the major port on the South West Africa coast, and the offshore Penguin islands had been part of the Union of South Africa (1910), and before Cape Colony (1878), through earlier annexation. The Walvis Bay enclave was transferred to South West Africa administration in October, 1922. Prior, the Walvis Bay enclave used Stamps of Cape Colony or the Union of South Africa.

Of interest, the Walvis Bay territory reverted to the South Africa Republic in 1977, and South Africa stamps were again used.  It was not until 1994, four years after Namibia became independent, that Walvis Bay and the Penguin Islands no longer were under South African control, and became part of the new nation. 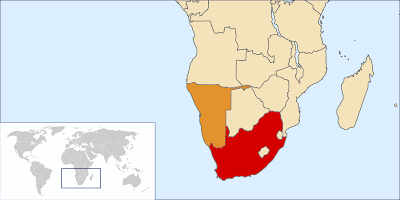 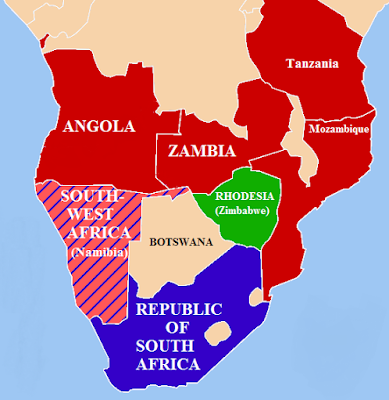 Namibian (Guerrilla) War of Independence: Status 1978
Nations (in Red)  sympathetic to Rebels
This would become a sticking point later, as South Africa's apartheid policy was enforced in South West Africa in 1948. The U.N. eventually took over responsibility, and the country, after a 1966-1988 guerrilla war, and much wrangling, as South Africa considered the territory essentially theirs, became independent as Namibia in 1990. (Walvis Bay and the Penguin islands remained under South African control until 1994.) 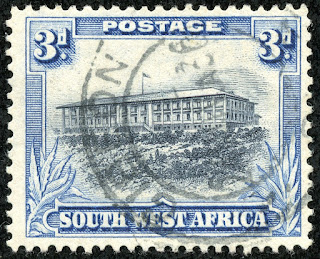 1931 Scott 112a 3p deep blue & gray black "Windhoek"
Into the Deep Blue
The 2014 Scott Classic 1940-1940 catalogue has, for South West Africa 1923-1952, 217 major number descriptions.  This, of course, grossly underestimates the number of stamps to be collected, as almost all of the numbers have an English script stamp and an Afrikaans script stamp, collected either as separate singles or as a pair. Some are actually collected as a strip of three. A quick accounting would suggest there are ~ 405 stamps to be collected during this era.

In fact, I recommend (if possible) for the WW collector to accumulate stamps as singles- much more cost friendly than intact doubles. 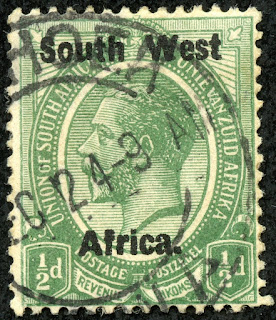 1924 Scott 16a 1/2p green?
Setting I or Setting III? : Both!
From 1923-1927, stamps of South Africa  were overprinted alternately throughout the sheets in English or Afrikaans. The overprints are characterized by Scott into nine settings!! (Setting I-IX), depending on the script used (Type a-q), the width of the script (in mm) , and the space between the overprint script (in mm) on a stamp. !! Scott does a reasonable job of illustrating and describing the differences, so I will not repeat the catalogue information here.  There are 52 major descriptive numbers during this "nine settings" period.

That doesn't mean one can always place a stamp into a particular setting if one has a single English stamp. Scott has a note that the English overprint of Setting I (1923 Scott 1-12) is the same as that of Setting III (1923-24 Scott 16-27).

True, I prefer to collect single specimens because they are less expensive.  But, in this case, collecting Setting I and Setting III as pairs would prevent uncertainty. 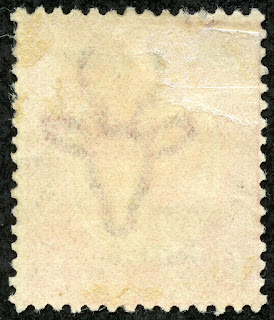 Wmk 177 "Springbok's Head"
This might be a good time to show a "Springbok Head" (Wmk 177) watermark, found with the overprinted 1923-30 issues. Nice! I didn't show watermarks during the South Africa post blogs, because there was no need for specific stamp identification. The other watermark found for the South West Africa stamps is "Multiple Springbok's Head" (Wmk 201), with several "Heads" on a stamp. 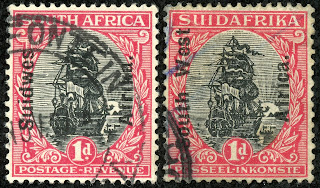 1926 Scott 86c-d 1p carmine & black
Setting VIII
In 1926 , an overprinted issue using Type "p" and "q" OP types was released for the 1/2p, 1p, and the 6p South Africa Se-Tenant stamps. The English and the Afrikaans script OP can either be found on their respective English or Afrikaans stamp (major number), or the opposite (minor number) - as illustrated here. 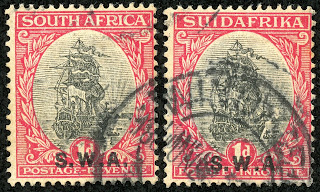 For me, this issue is the highlight of classical era South West Africa.

Cape Cross is a small headland on the inhospitable northern Skeleton Coast in the South Atlantic of South West Africa (now Namibia). Diogo Cao, Portuguese explorer, reached Cape Cross in 1486, and left a Cape Cross Padrao. The original Padrao was removed in 1893 by Captain Becker of the German Navy, and sent to Berlin. It was replaced later by a stone replica.

The area is known now for the Cape Fur Seals Reserve. 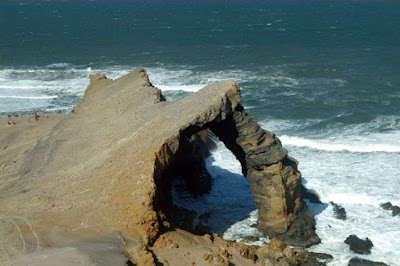 Bogenfels
It is in a (now) restricted diamond mining area. Combined with the Namib Desert ("vast place"), which consists of arid gravel plains and sand dunes, and not much else, the "Bogenfels" is not easy to visit. ;-) 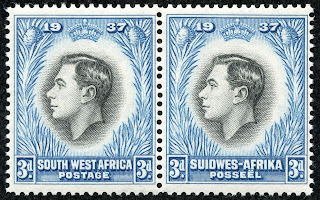 1937 Scott 129 3p bright blue & black
"George VI"; Coronation Issue
The 1937 George VI coronation issue- eight stamp "pairs", must have been widely distributed in the philatelic trade, because I have plenty of unused pairs in my feeder albums, and the CV is <$1-$2 for pairs. This wonderful stamp design shows there is no correlation between "value" and intrinsic aesthetic appeal. 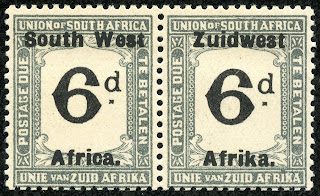 1938 Scott O17 1 1/2p violet brown "Mail Transport"
Overprinted in Red
Official Stamps were issued for South West Africa during the 1927-1952 period by overprinting in English and Afrikaans, as shown. Use of official stamps ceased in 1955. 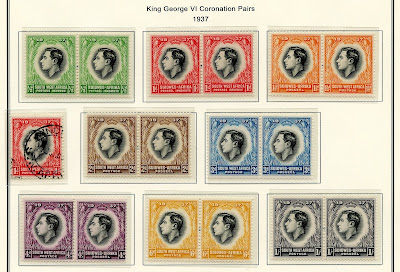 1937 Coronation Issue in Deep Blue
Deep Blue (Steiner) has 23 pages for the stamps of South west Africa for 1923-1952. The spaces, naturally, provide room for the (usual) double pair, or two singles. All of the major descriptive Scott numbers have a space.

Expensive stamps in BB: There would be more, but I am only pricing out singles, not intact pairs.

BB gives no spaces to Officials.

a= English; b= Afrikaans

Comments
A) Expensive stamps ($10 threshold):
1931 Scott J90 6p gray & black ($10+)
B) As noted, a= English; b= Afrikaans stamp in the checklist.
C) *1923-24- BB shows an illustration for Setting I. That is why Scott 1-4 was selected for the spaces. Be aware that Setting I English stamps (as singles) will look identical to Setting III English stamps. (If one wishes to be sure, collect Setting I as pairs.) 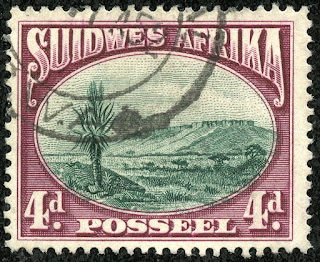 1931 Scott 113b 4p brown violet & green "Waterberg"
Out of the Blue
Much like Australian philately, South African sphere stamp collecting (the earlier colonies, South Africa, and South West Africa) is a philatelic world to itself, is highly attractive, and is ripe for specialty concentration. I feel the pull! Alas, as a WW collector, I will reluctantly move on.

Note: Maps and Bogenfels pic appear to be in the common domain.