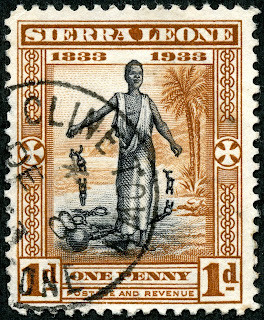 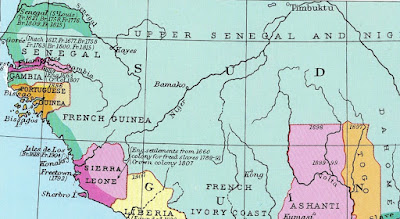 West Africa up to 1914
Sierra Leone (British Territory): Dark Pink-1880; Light Pink- 1914
Under British protection, freed African-American slaves were transported to Sierra Leone in 1787 after the American Revolutionary War, and founded Granville Town. Ironically, but not surprising, the settlement was opposed by the indigenous Temne and Mende peoples.

Freetown was founded on March 11, 1792 with the settlement of 1,200 Black Loyalists, who came via Nova Scotia.

Beginning in 1808, following the British Empire's abolition of the slave trade in 1807, thousands of liberated people from confiscated slave ships were brought to Freetown.

The Sierra Leone Company, formed by abolitionists, then turned the territory over to the African Institution in 1807 (recognized by the British Crown).

The returning freed Blacks, adopting the southern U.S. (western) habits in culture and dress, and mostly Christian (Methodist), formed the Krio (Creole) people, with Krio as the trading language. They were the Black ruling and educational elite. Naturally, conflict eventually developed with the native peoples of the interior, who were mostly Muslim. Today, the Krio people comprise about 4% of the population.

English is still today the official language, but Krio is the trading language for all ethnic groups. 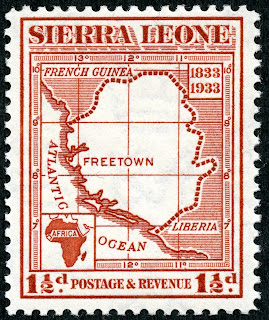 In 1896, the British expanded into the interior, and declared the additional territory a British Protectorate.

Conflict with the native peoples (Temne-Mende) escalated, leading to the Hut Tax war of 1898.

In 1924, Sierra Leone was administratively separated into a Colony (coastal area and Freetown), and a Protectorate (the interior, dominated by ethnic tribes and chiefs). 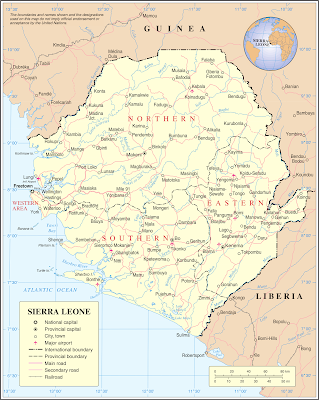 U.N. Map of Sierra Leone
In 1951, a new constitution was developed, and the Colony and Protectorate merged, under the brilliant leadership of Sir Milton Margai, an ethnic Mende.

Sierra Leone gained independence on April 27, 1961, and remains a member of the British Commonwealth.

Today, Sierra Leone is both rich in resources (diamonds, third largest natural harbor in the world), and poor (70% are below the poverty line, Ebola outbreak, WHO Life Expectancy-age 46- last (194) among all nations). 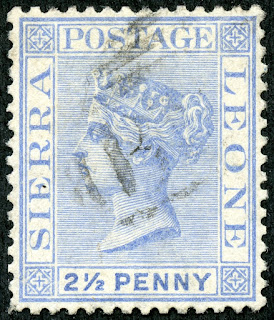 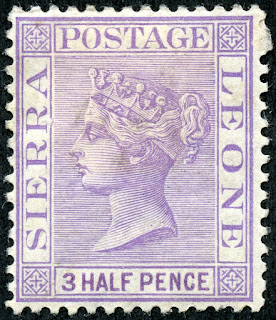 All issues of Sierra Leone were typographed by De La Rue until 1932. 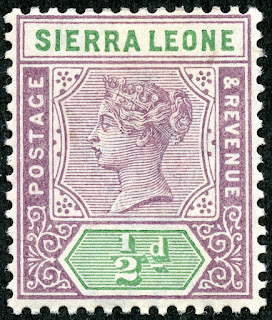 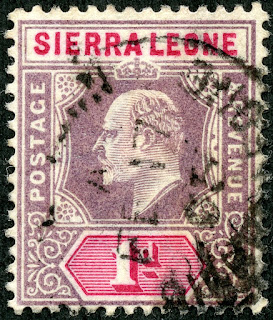 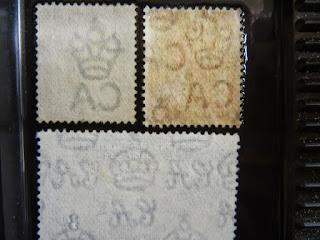 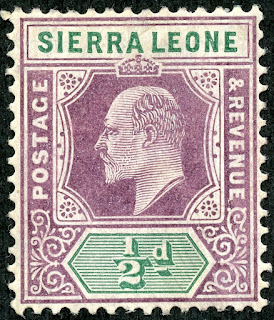 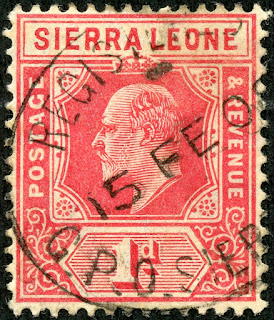 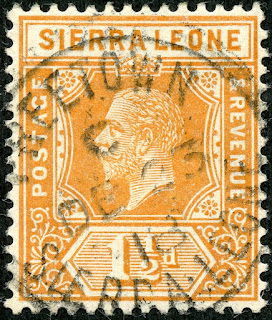 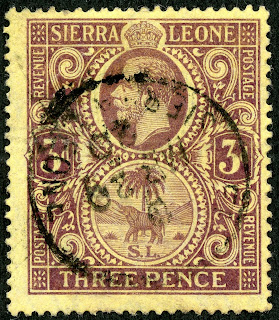 1912-24 Scott 108 3p violet/yellow , Wmk 3
"King George V and Seal of the Colony"
The (mostly) higher denominations (eight stamps) have this large format design. I particularly enjoy the elephant drawing on the Seal of the Colony. 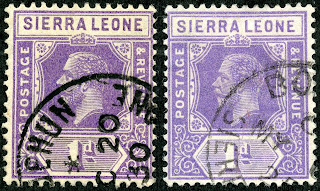 I've covered the Die I/Die II differences before: if one needs a refresher, take a look at the Fiji blog post. Also, the 2014 Scott Classic 1840-1940 catalogue shows the differences rather nicely on page 38A (Introduction Section). 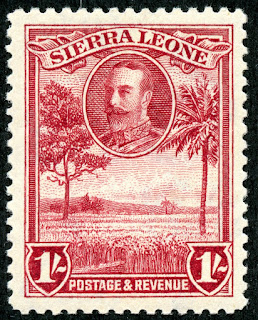 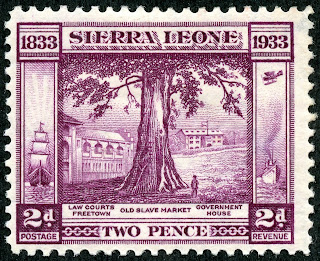 1933 Scott 156 2p violet
"Old Slave Market, Freetown"
The 1933 "Wilberforce Issue" of thirteen engraved specimens , each with their own unique scene, some with bi-color, is, no doubt, the most arresting stamps of the Sierra Leone classical era.

They commemorate the abolition of slavery in the British colonies, and the death of William Wilberforce, abolitionist, in 1833. 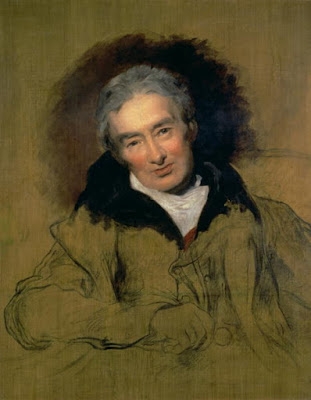 William Wilberforce (1759-1833)
Unfinished portrait by Sir Thomas Lawrence (1828)
Wilberforce became an Evangelical Christian at the age of 26 in 1875, which profoundly changed and affected his moral outlook. He became the leading advocate in Parliament for abolition of the British Colony slave trade. This was effected in 1807 (allied with the Quakers, who had 40 seats) with passage of the Slave Trade Act.

Great Britain used its influence to pressure other nations to follow suit. The United States likewise abolished its Atlantic slave trade (but not the domestic slave trade). 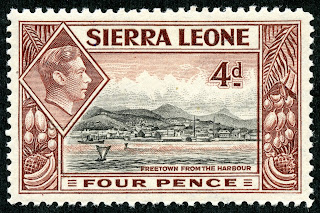 Although our coverage for the classical period ends here, I would be remiss if I didn't mention where Sierra Leone went philatelically after independence in 1961: In short, off the deep end from 1964-1971. ;-)

(If you don't know what I mean, check the stamp "specimens" for this era. ;-) 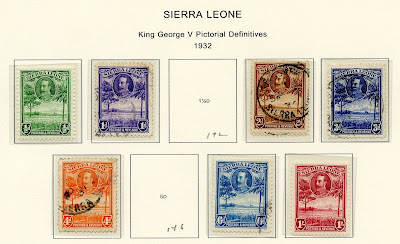 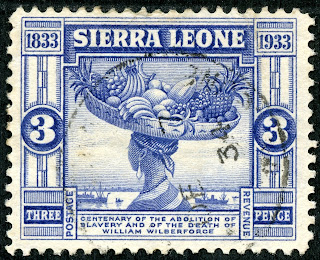 1933 Scott 157 3p ultramarine "Fruit Seller"
Big Blue
Big Blue '69, on two pages, has 59 spaces for the stamps of 1884-1938 Sierra Leone. Coverage (subtracting the eleven post 1940 stamps in the Scott 1840-1940 catalogue) is 32%. Although the coverage is not generous, considering the relatively high valuations for this British colony, it is certainly a reasonable selection for the WW collector.

The coverage is located between "Siam" and "Somalia" in the '69, and between "Somaliland Protectorate"  and "Somali Coast" in the 1940s editions.

Remarkably, BB manages to have all spaces under CV $10. (No expensive stamps!) 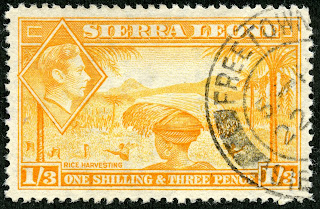 1944 Scott 181A 1sh 3p orange yellow "Rice Harvesting"
Out of the Blue
I find the colonial history of Africa fascinating. And the 1933 Wilberforce stamps are clearly one of the better colonial issues ever released.

Note: Maps, Wilberforce image portrait, and Freetown drawing appear to be in the public domain. 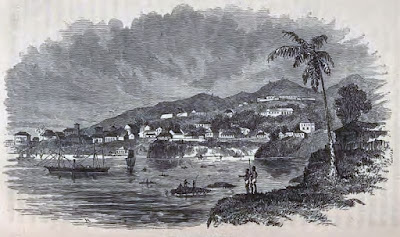