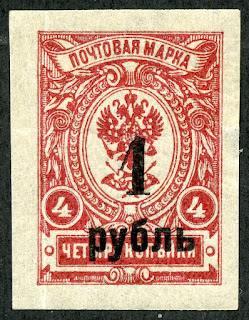 1919 Scott 10 1r on 4k carmine
On Russian Imperforate Stamps of 1917, Surcharged
Quick History
Siberia consists of a huge territory of Russia between the Ural Mountains and the Pacific Ocean. But, for purposes of this post, the "Siberia" philatelic history is a consequence of the Russian Civil War following WW I between the Red Army (Bolshevik) and the White Army (anti-Bolshevik) forces. 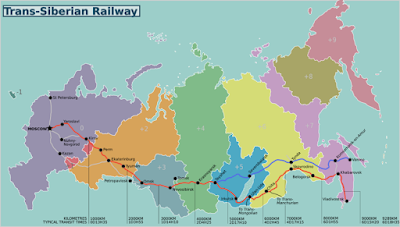 There are three philatelic threads...
* The Czechoslovak Legion
* The anti-Bolshevist provisional government at Omsk by Admiral Kolchak
* The anti-Soviet government in Priamur province

We will look at each one separately, although clearly they also intersect with each other.

The Legion consisted of volunteer armed forces of Czechs- (mostly) - and Slovaks - later augmented by released Czech and Slovak POWs - who fought alongside allied powers during WW I. This was to win the Allies' support for independence of Bohemia and Moravia from the Austrian Empire, and of Slovak lands from the Kingdom of Hungary. (They, in fact, succeeded in winning popular Allied support, and Czechoslovakia was formed after WW I.)

The Legion fought alongside the Russian army during WW I, and distinguished themselves in the
Battle of Zborov (1917), and the Battle of Bakhmach (1918), both in the Ukraine. 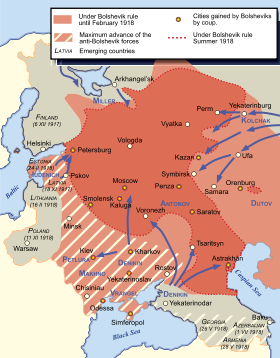 Russian Civil War
(Striped Territory represents maximum advance of  Anti-Bolshevik Forces)
But the Legion was then stuck in Russia in the midst of the crossfire between Russian Red and White forces. As the Russian main ports were blocked to the west, Masaryk and his troops (eventually reaching some ~60,000) were granted permission by the Bolsheviks in February, 1918, to travel ~6,000 miles to the port of Vladivostok on the Pacific coast, and be evacuated on ships.

But both sides distrusted each other, and when the Legion was strung out along the Trans-Siberian Railway from Penza to Vladivostok, Trotsky ordered the complete disarmament and arrest of the legionaries. But there was a Revolt of the Czechoslovak Legion, in which they fought the Bolsheviks in the Volga, Siberia, and Ural regions. The Legion was, at various times, in control of most of the Trans-Siberian Railway.

This lead to an international movement to "rescue" the Czechoslovak Legion from Russia, as they were blocked by Bolshevik forces in Transbaikal. Japanese (70,000) and American (5,000) troops, among others, arrived in Vladivostok in autumn, 1918. (The Americans distrusted the Japanese intent, and mostly kept an eye on Japanese movements.)

A three stamp set was printed from Irkutsk in 1919-20, and sent to Czech Field Posts, for use on its mail. Eventually, some fifteen major stamp issues were produced.

By September, 1920, some 67,000 people (mostly Czechoslovak Legion troops) were evacuated from Vladivostok. The number of Legionaries killed in Russia was 4,100. After return to Czechoslovakia, the Legion formed the core of the new Czechoslovak army.

The anti-Bolshevist provisional government at Omsk by Admiral Kolchak 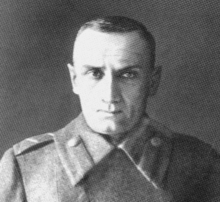 Last Photo of Admiral Kolchak
Alexander Vasilyevich Kolchak was a commander in the Imperial Russian Navy (Russo-Japanese War, Black Sea Fleet in WW I), and a polar explorer. He established an anti-Bolshevist government in Omsk, in southwestern Siberia (The Provisional All-Russian Government was overthrown, and a dictatorship was formed under himself) between 1918-1920, and he was recognized as the "Supreme Ruler and Commander-in-Chief of All Russian land and Sea Forces" by the other White movement leaders, as well as internationally.

In 1919, his government released ten surcharged values on Russian stamps of 1909-18.

But Kolchak's Siberian armies were in steady retreat during autumn, 1919, and the Red Eastern Army took Omsk on November 14, 1919.

By this time the homesick Czech legionaries simply wanted to leave Russia, but were ordered by Allied representatives to safely escort Admiral Kolchak to Vladivostok. Rather, they left Kolchak with authorities in Irkutsk: in exchange the Fifth Red Army would allow passage of the Legion to Vladivostok. Kolchak was killed by firing squad on February 7, 1920.

The anti-Soviet government in Priamur province 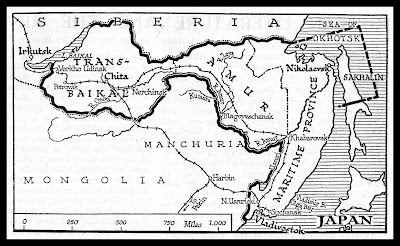 Far Eastern Republic
The Provisional Priamur Government Enclave included Vladivostok north to Khabarovsk
The government had its origins in Vladivostok by white army sympathizers as an attempt to break away from the Far Eastern Republic.  The Far Eastern Republic was set up by the Russian Soviet Federative Socialist Republic (and basically controlled by them) as a buffer state between itself and the territory controlled by the Japanese during the Russian Civil War. (Recall that 70,000 Japanese troops had arrived in Vladivostok to "rescue" the Czechoslovak Legion troops that were stuck in Russia.) Of course, the fledgling anti-Bolshevik government was helped by the nearby Japanese protection.

The Priamur Government existed between May 27, 1921 and October 25, 1922, and was the last existing White Army enclave.

Parsing a little more finely, The Priamur Provisional Government under the Merkulov brothers existed until June 8, 1922, when they were removed, and then the Priamur Rural Province under General Diterikhs  lasted until October 25, 1922.

Stamps (60) were issued during this period on surcharged and/or overprinted stamps of Russia and the Far Eastern Republic.

When the Japanese left, the Red Army quickly took the territory- and well, that was that. 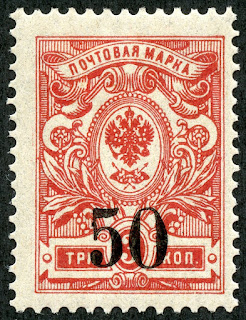 1919 Scott 2 50k on 3k carmine
On Russian Stamps of 1909-12, Surcharged
Into the Deep Blue
The 2014 Scott Classic Specialized 1840-1940 catalogue has, for Siberia 1919-1922, 70 major descriptive numbers. Ten stamps were issued in 1919 by the anti-Bolshevist provisional government at Omsk by Admiral Aleksandr V. Kolchak. Sixty stamps were issued in 1921-22 by the monarchist anti-Soviet government in Primur province.

Before we review some of the "Siberia" stamps, - a cold dose of reality. It has to be assumed (unless known or demonstrated otherwise)  that any surcharged/ overprinted stamp of "Siberia" is a likely counterfeit: a fact of life for the WW classical collector. 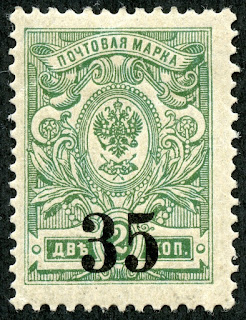 1919 Scott 1 35k on 2k dull green
On Russian Stamps of 1909-12, Surcharged
The Kolchak provisional government at Omsk produced a ten stamp issue in 1919. Six stamps were perforated, and were surcharged on Russian stamps of 1909-12. The issue was released from Omsk, but also (according to Scott) were used later along the Trans-Siberian railway line to Vladivostok. 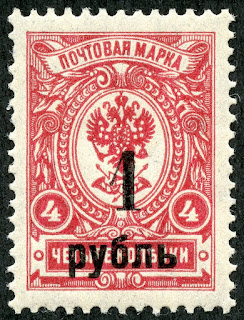 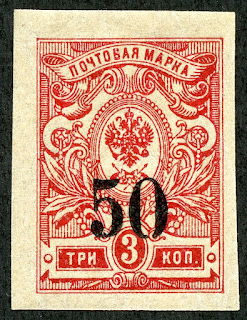 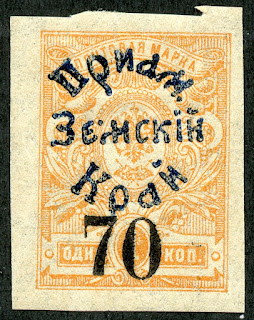 1922 Scott 109 70k on 1k orange, imperforate
On Stamps of Serbia, 1919, Overprinted in Dark Blue
"Priamur Rural Province" Government Issue
The Priamur Government Issues (Nikolaevsk Issue -22 stamps) under the Merkulov brothers were released in 1921, and are handstamped/surcharged or overprinted on 1909-17 Russian stamps. These are only listed in Scott for unused, and are quite expensive (CV $80-$2000). I don't have any.

There was also a four stamp issue in 1922 overprinted on Stamps of the Far Eastern Republic, and intended to celebrate the one year anniversary of the overthrow of Bolshevik power in the Priamur district. These are expensive (CV $25), and, no, I don't have those either. ;-)

The Priamur Rural Province stamps are also expensive (CV tens-hundreds). Scott has a note that "Counterfeits abound". The 1922 Scott 109 70k on 1k orange, imperforate illustrated above has a CV of $110. What are the chances that it is genuine? ;-) 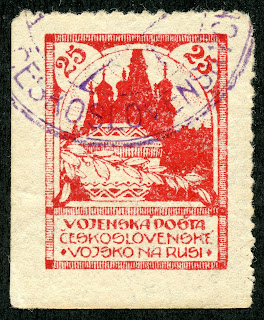 Czechoslovak Legion Post
1920 Scott 1a 25k carmine "Urn and Cathedral at Irkutsk"
Perf 11 1/2
Eventually,  some fifteen major stamp issues were produced for the Czechoslovak Legion Post while they were in Siberia along the Trans-Siberian railway. A three stamp set was printed from Irkutsk in 1919-20, and sent to Czech Field Posts, for use on its mail. Scott states the lithographic three stamp issue was printed by Makusin & Posochin in Irkutsk. They were imperforate, and ungummed, but a cracked yellow gum was applied at Field Post offices. In January, 1920, a quantity of sheets were perforated 11 1/2. (Supposedly, my stamps (Scott 1a-3a) are from this group- although the cancellations appear to be CTO.) 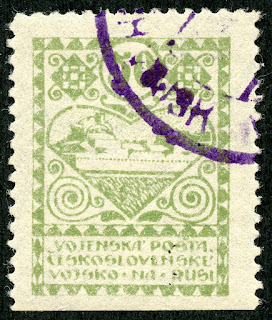 Czechoslovak Legion Post
1920 Scott 2a 50k yellow green "Armored Railroad Car"
Perf 11 1/2
According to a note in the Scott catalogue, ungummed imperforate remainders were later sent to Prague where smooth white gum was applied. A quantity  of sheets were  perforated 13 1/2, but a few were perforated 11 1/2. 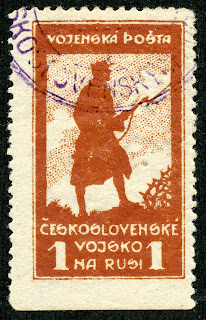 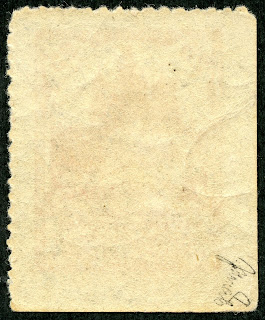 Czechoslovak Legion Post
1920 Scott 2a Reverse; Perf 11 1/2
Cracked Yellow Gum
How does one know if one has the originally issued stamp or a remainder?

It all hinges on the "Cracked Yellow Gum".  ;-) It appears to be so, but I would prefer to have a smooth white gum example for comparison.

Also, notice the signature on the lower right corner of the stamp reverse? 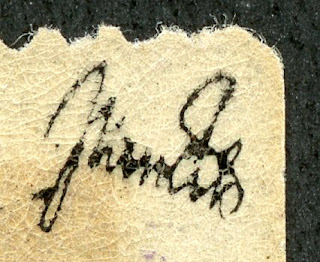 JMmak signature
Not uncommonly, one can find "expert" or "dealer" signatures on the back of stamps that passed through European stamp channels. (This practice is rarer in the U.S.)

G. Kock from Finland maintains a website where one can search the "expert" marks.

Jan Mmak
My Czech legion Post three stamp issue all include a signature stamp from Jan Mmak (1903-68), of Czechoslovakia, who was an active "expert" from 1937-1940s, and a member of A.I.E.P 1960-68. He was important enough that the expert mark website also has examples of three forgeries of his signature found on stamps. (My signatures appear to be genuine.) 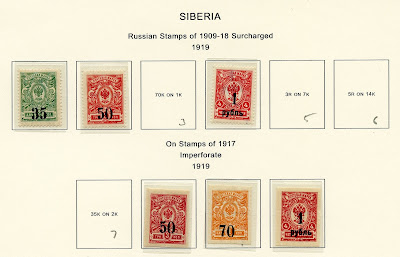 Siberia 1919 Issues in Deep Blue
Deep Blue (Steiner) has five pages for the stamps of Siberia, and includes a space for all the major numbers in the modern Scott catalogue. Of interest, the modern Scott catalogue includes Scott 1-10, and Scott 51-118: The other numbers are not there. The 1947 catalogue lists Scott 13-23, but there is a note that the authenticity of these stamps is questioned. Obviously, they were subsequently removed from the catalogue. And then the Czech Legion Post stamps (Scott 31-45) were moved to Czechoslovakia. Yes, a catalogue is a living breathing thing. ;-)

Big Blue Siberia: Czechoslovak Legion Post issues
Big Blue
The Siberia entry was eliminated by the '69 BB editors. But "Siberia" remains as one line and six spaces, albeit the Czech Legion stamps, in the 1940s editions of BB. The entry is located between Senegal and Seychelles. 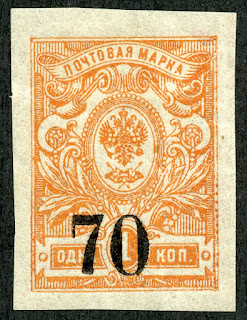 1919 Scott 9 70k on 1k orange
On Russian Imperforate Stamps of 1917, Surcharged
Out of the Blue
I'm pleased that the 1940s BB shows the Czech Legion Post stamps, as that is a quite interesting bit of real- and philatelic- Siberian history.

Note: Maps,and Kolchak and Mmak pic appear to be in the public domain.

Note: Dead Counties Stamps has a nice review of the history of this area and times.

Comments appreciated!
Posted by Jim at 10:50 AM