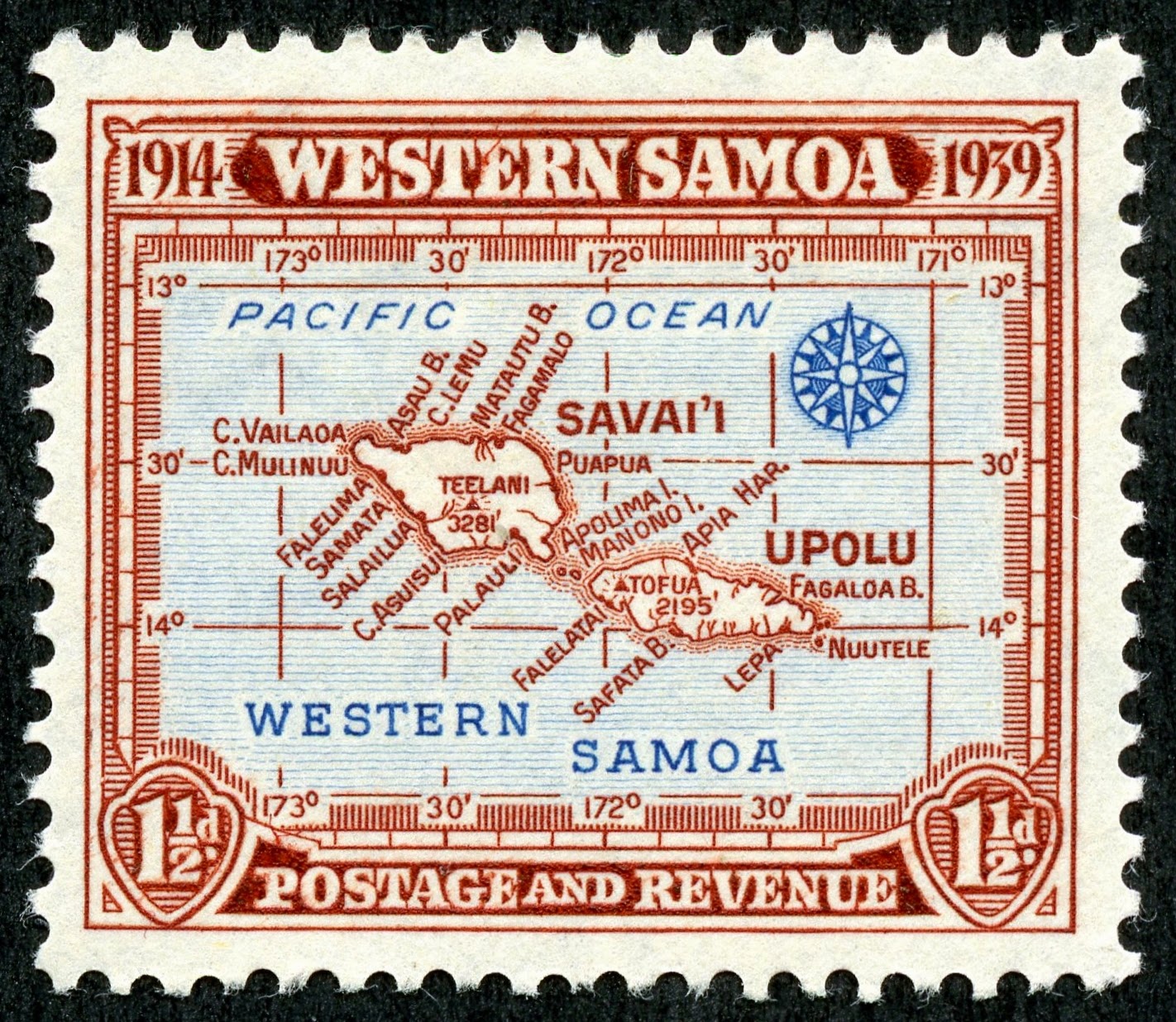 Samoa Islands
Britain vacated her claims on the islands, but was given compensation, as Germany ceded any rights to Tonga, among other concessions.

The Samoan Chiefs and natives had little to say about this.

The coaling station at Pago Pago was converted into a U.S. Naval Station.

In 1911, the U.S. territory was officially renamed American Samoa.

American Samoa has never had their own stamp issues, as U.S. stamps were used from the beginning.

During the 1918 flu pandemic, the Governor of American Samoa, John Poyer, had quarantine ships surround the territory. Hence, American Samoa had no pandemic deaths.

In contrast, the occupied (by New Zealand) "Western" Samoa  had 8,000 Samoan deaths, over 20% of the population. This was the worst of any Pacific island group. The cause was a New Zealand trading ship Talune, which docked in Apia in 1918 carrying people infected with the flu. 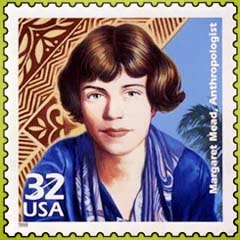 Margaret Mead
American Samoa is also known as the seminal workplace of Margaret Mead, who helped develop the science of Anthropology through her fieldwork methods. 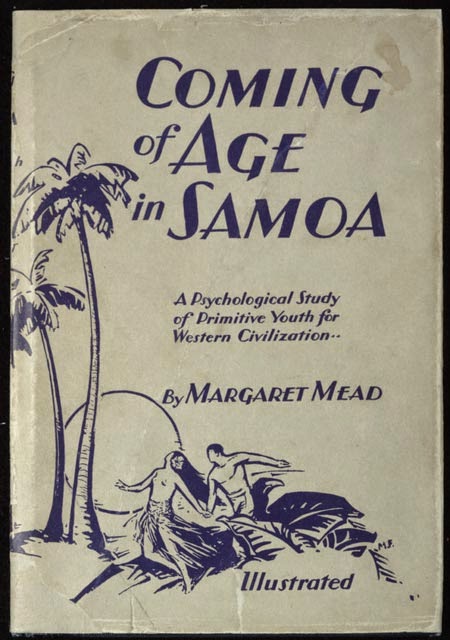 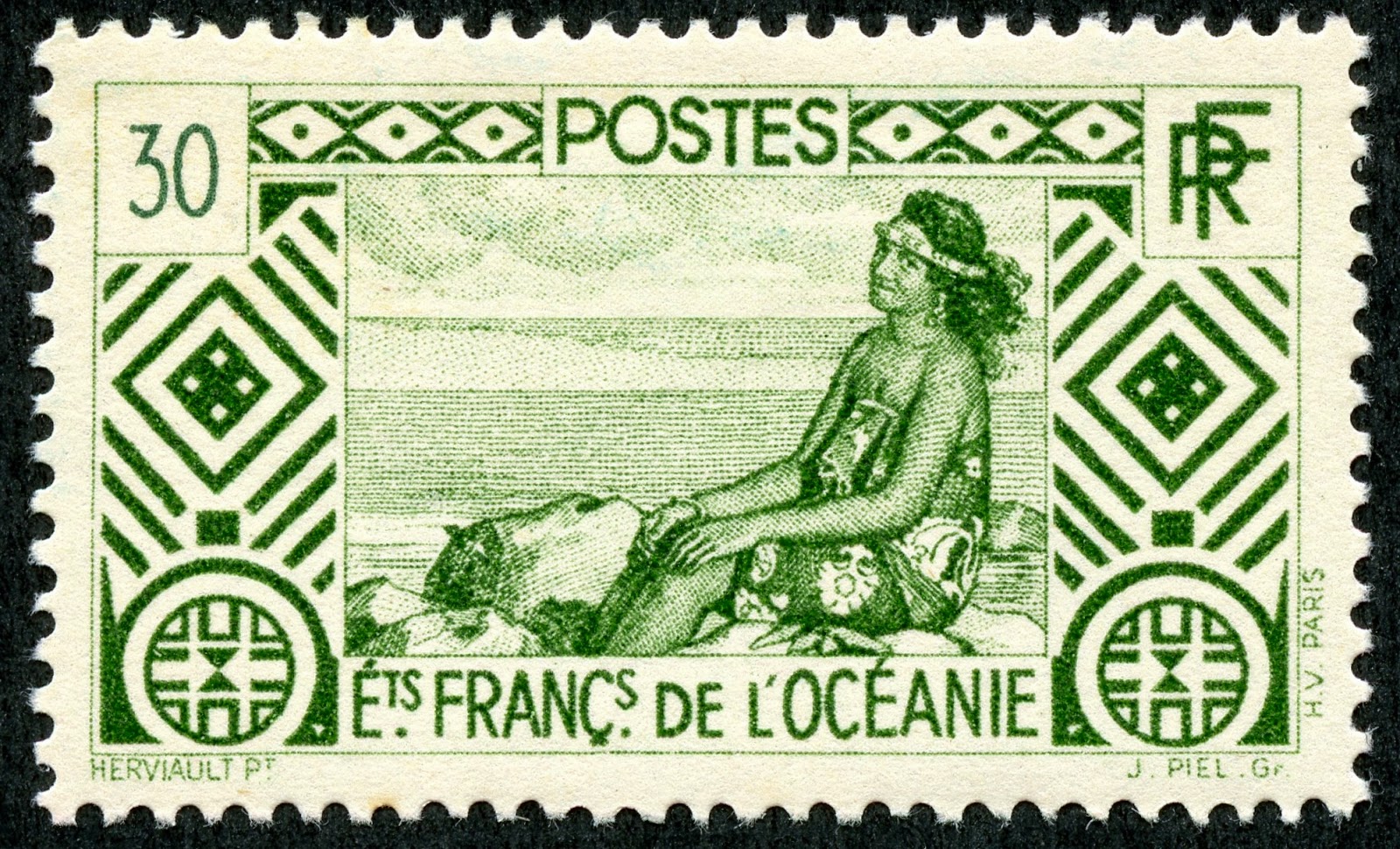 French Oceania 1934 Scott 89 30c yellow green
"Tahitian Girl"
I had to go to a French produced stamp to find a portrait of Polynesian beauty and island languor that would be in keeping with Mead's thesis of a rich variety of adolescent experience within the native culture. ;-) 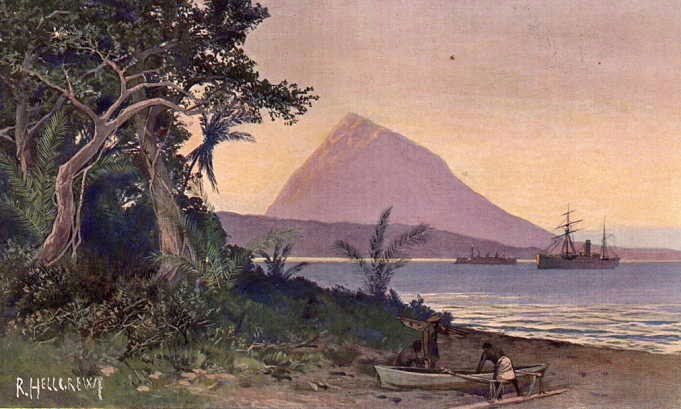 Saluafata Harbor, 10 miles east of Apia, Hellgrewe, 1908
From "Das Buch von unseren Kolonien"
German Samoa came into existence in 1900, and with typical German efficiency, roads, schools, and a hospital were developed. By 1908, German Samoa was a self supporting colony. Two thousand Chinese laborers were imported to work the plantations.

Stamps, typical for a German colony, were issued.

With the onset of WW I, the New Zealand Expeditionary Force (at the request of Great Britain) invaded unopposed on August 29, 1914. Germany had no armed forces on the islands.

In 1914, German stamps were overprinted "G.R.I." for "Georgius Rex Imperator", and surcharged in pence/shilling.

New Zealand then governed the islands through a League of Nations (later United Nations) mandate until 1962.

Samoa stamps proper were issued in 1921, and in 1935 the stamps were inscribed "Western Samoa".

Western Samoa gained independence in 1962, and joined the Commonwealth of Nations in 1970.

In 1997, the "Western Samoa" name was changed to "Samoa", which was protested by American Samoa, as it was felt it would lead to confusion, and reduced identity for American Samoa. 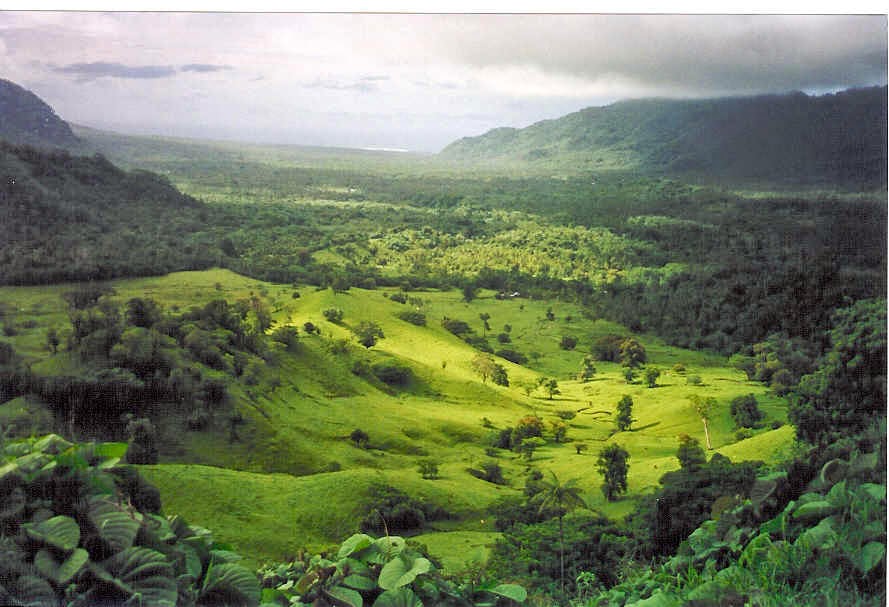 Falefa Valley, Upolu, (Western) Samoa
Although the culture of (Western) Samoa and American Samoa were identical initially, the influence of New Zealand and America, respectively, has widened the culture gap between the island groups. For instance, (Western) Samoa sports interest is rugby union and Samoan cricket. American Samoa is interested in American Football and the NFL. Thirty ethnic Samoans currently play in the NFL, about 40 times more representation than what one would expect, based on population. 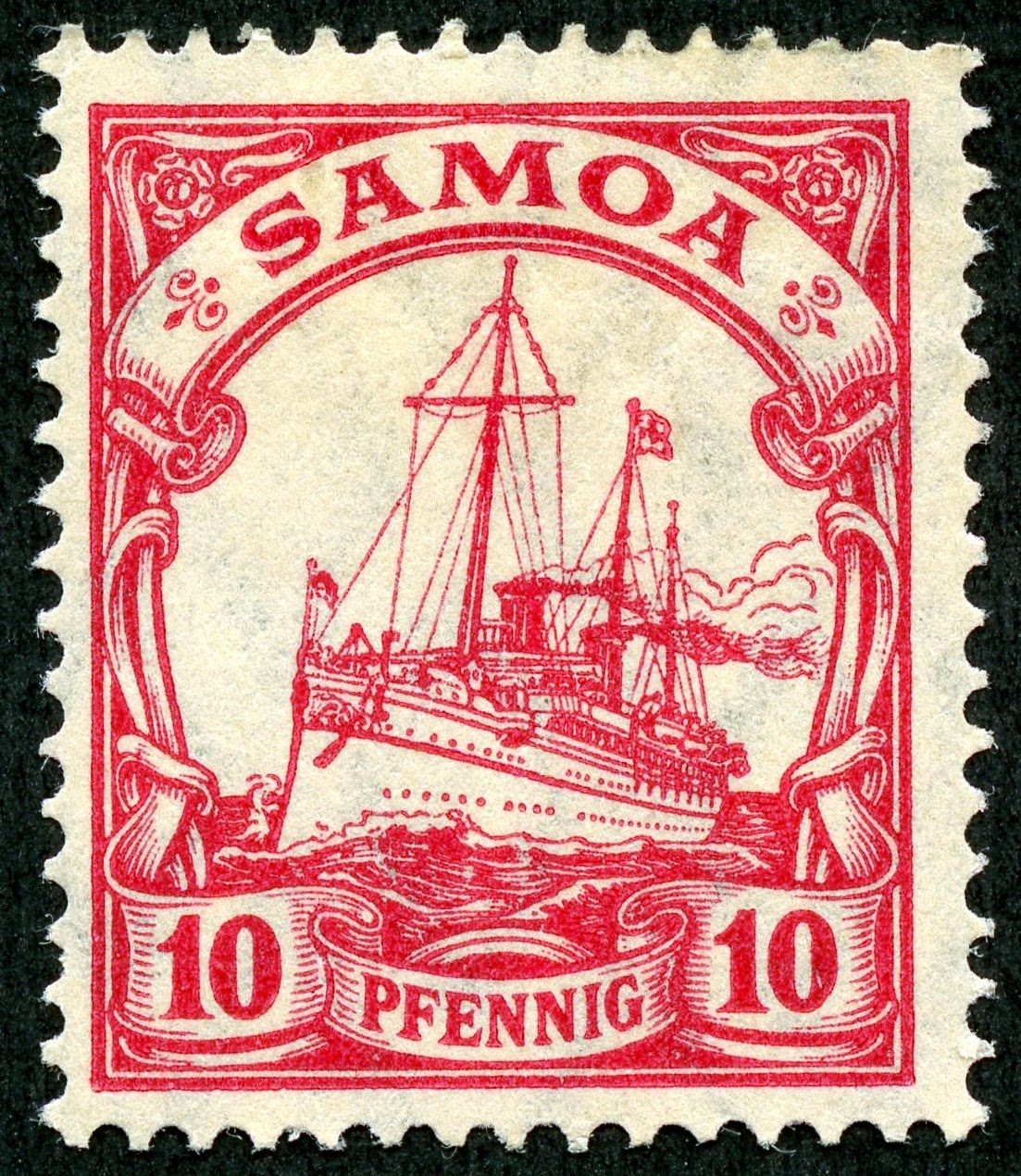 The stamps from a CV perspective are inexpensive to moderately expensive, except the "G.R.I." overprinted German Samoa stamps are expensive. 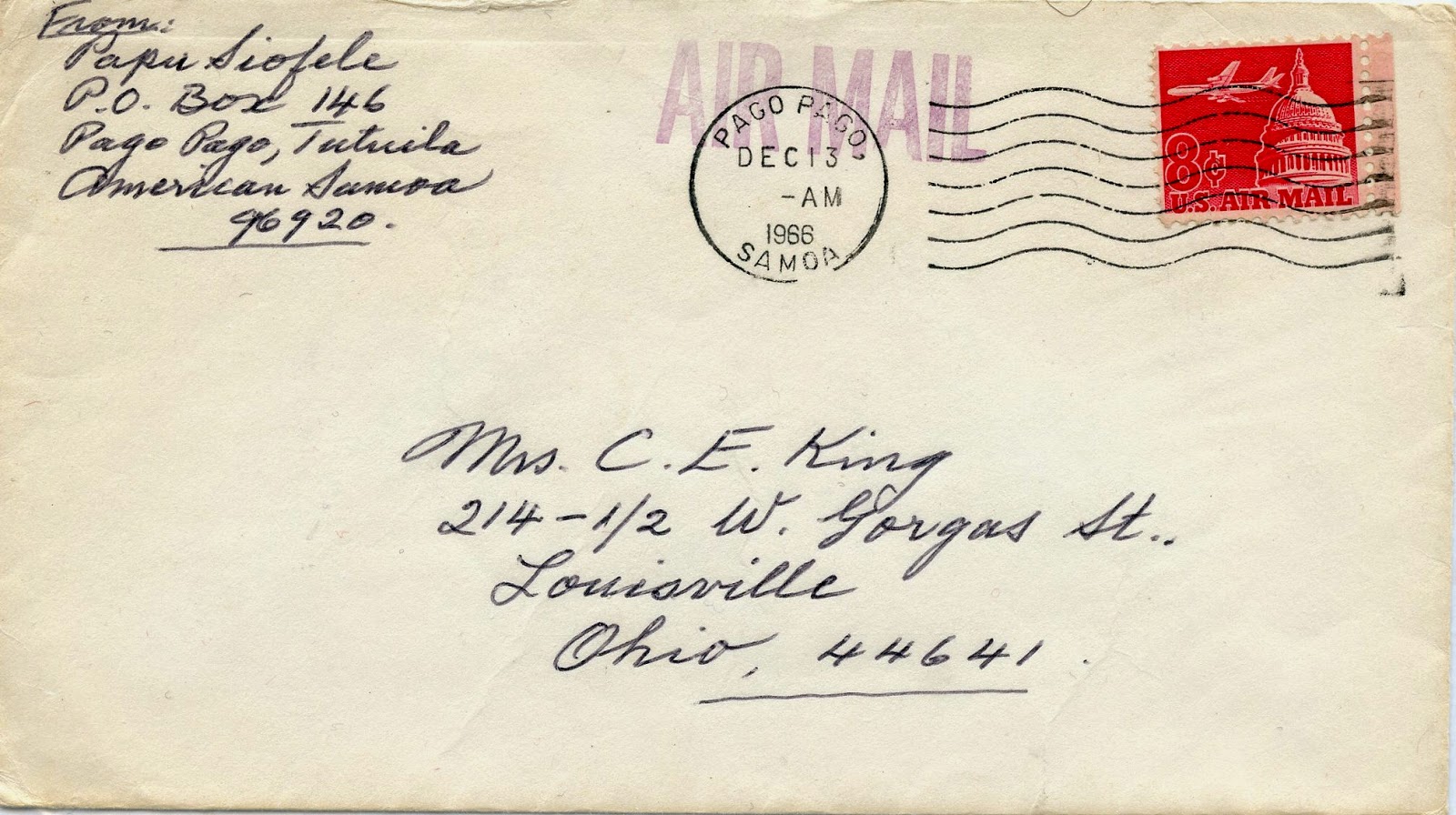 American Samoa: Pago Pago Postmark, December 13, 1966
There are no separate stamps for American Samoa, as U.S. issues were used there. 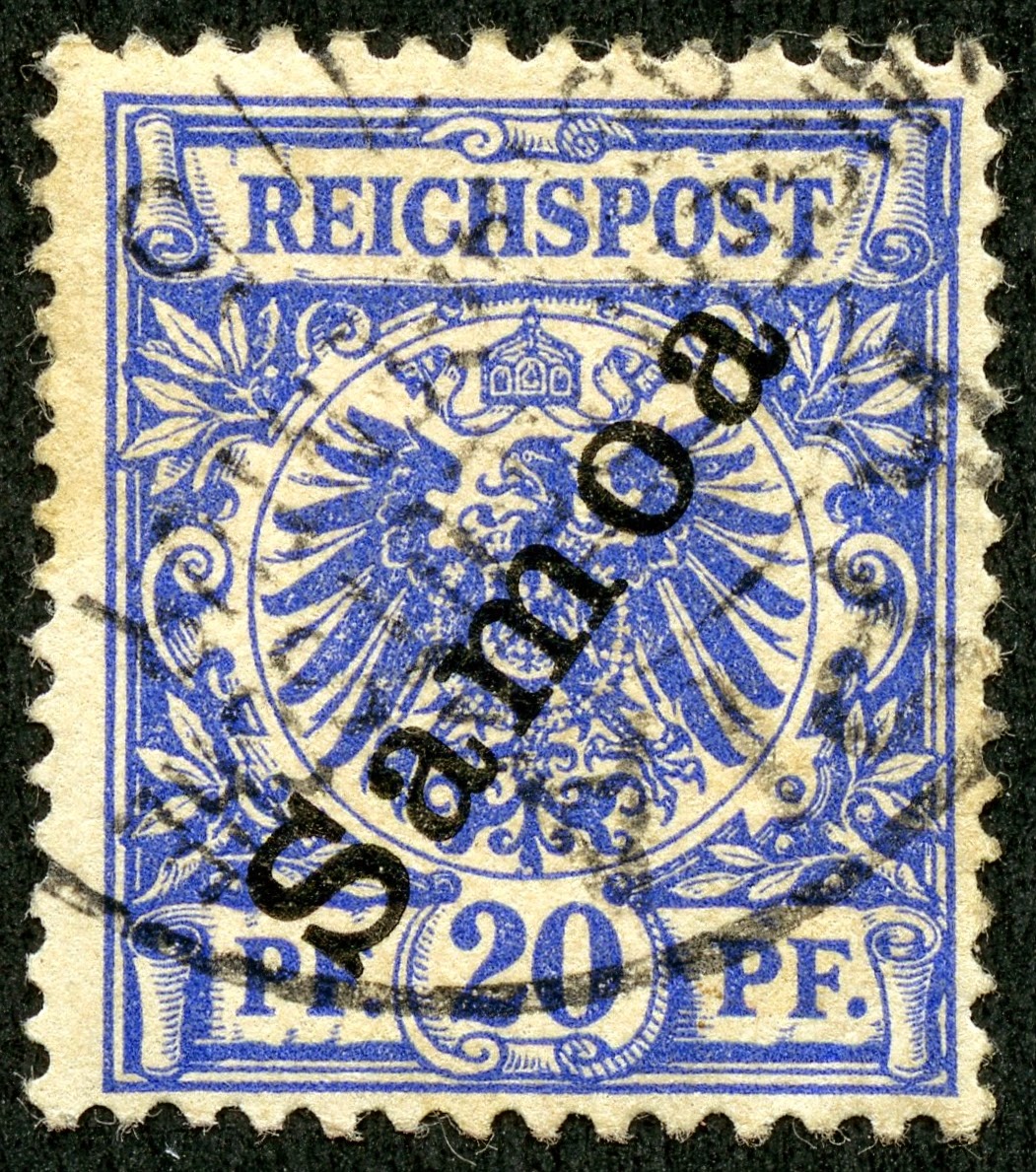 German Samoa 1900 Scott 54 20pf ultramarine
Stamps of Germany, Overprinted
The first issue for German Samoa consisted of six stamps of Germany that were overprinted "Samoa": by presumption in time for the opening of the German Post Office in Apia on March 1, 1900. 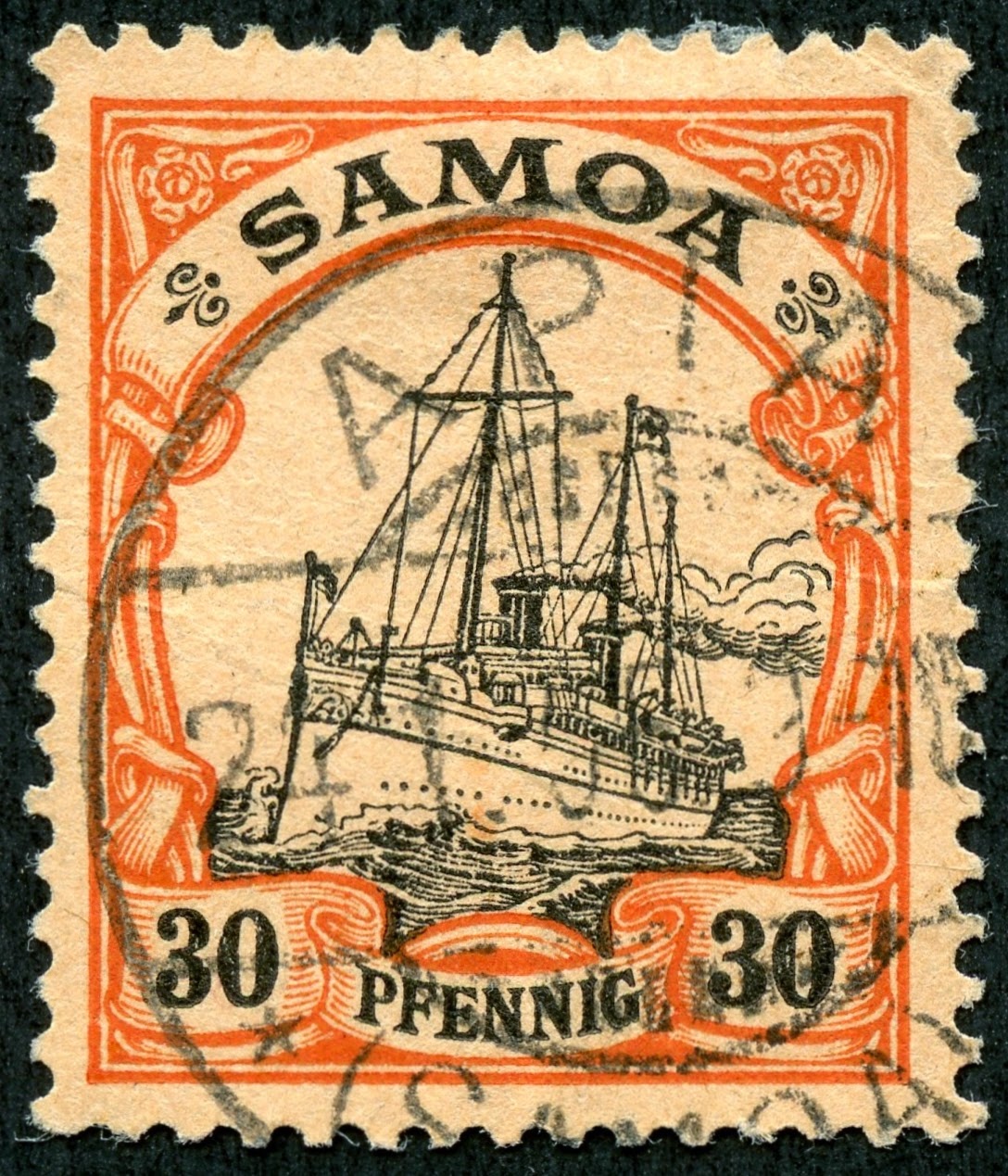 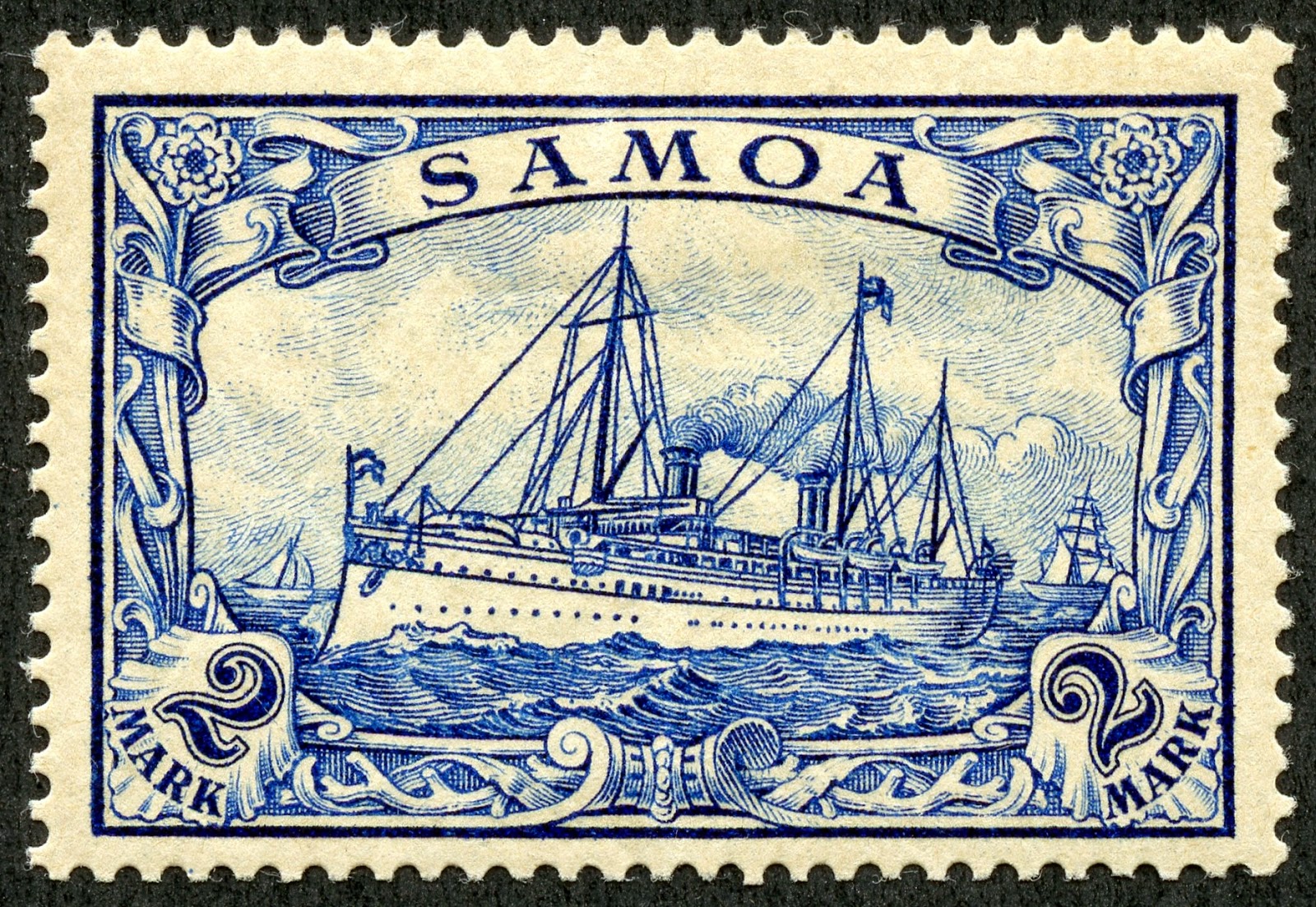 German Samoa 1900 Scott 67 2m blue
"Hohenzollern"
The mark denomination engraved stamps (four of them) were also issued in 1900. This design is right at the top for my all time favorites during the classical era.

Four more stamps of these designs were released in 1915 with watermark "Lozenges". They only exist unused in the catalogue, as they were never placed in use ( WW I occupation in 1914 of Samoa by New Zealand).

When New Zealand occupied German Samoa in August, 1914, the German colony stamps were overprinted "G.R.I."- Georgius Rex Imperator) and surcharged in pence/shillings. The CV ranges from $10+-$3,500, and I don't have any at the moment. 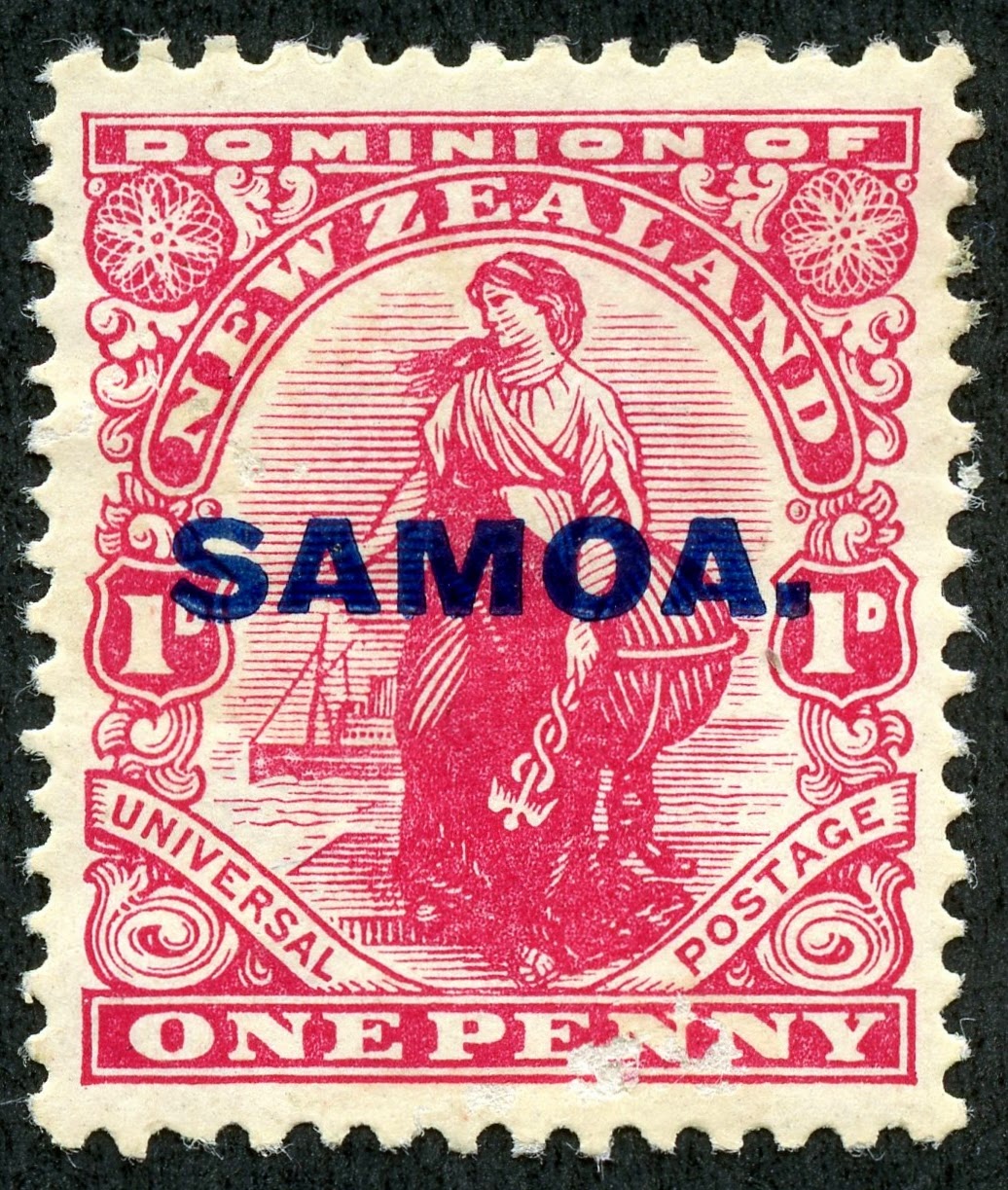 1914 Scott 115 1p carmine
Stamps of New Zealand Overprinted in Red or Blue
New Zealand stamps (six) were overprinted in red or blue, as shown, on September 29, 1914, and issued for occupied Samoa. 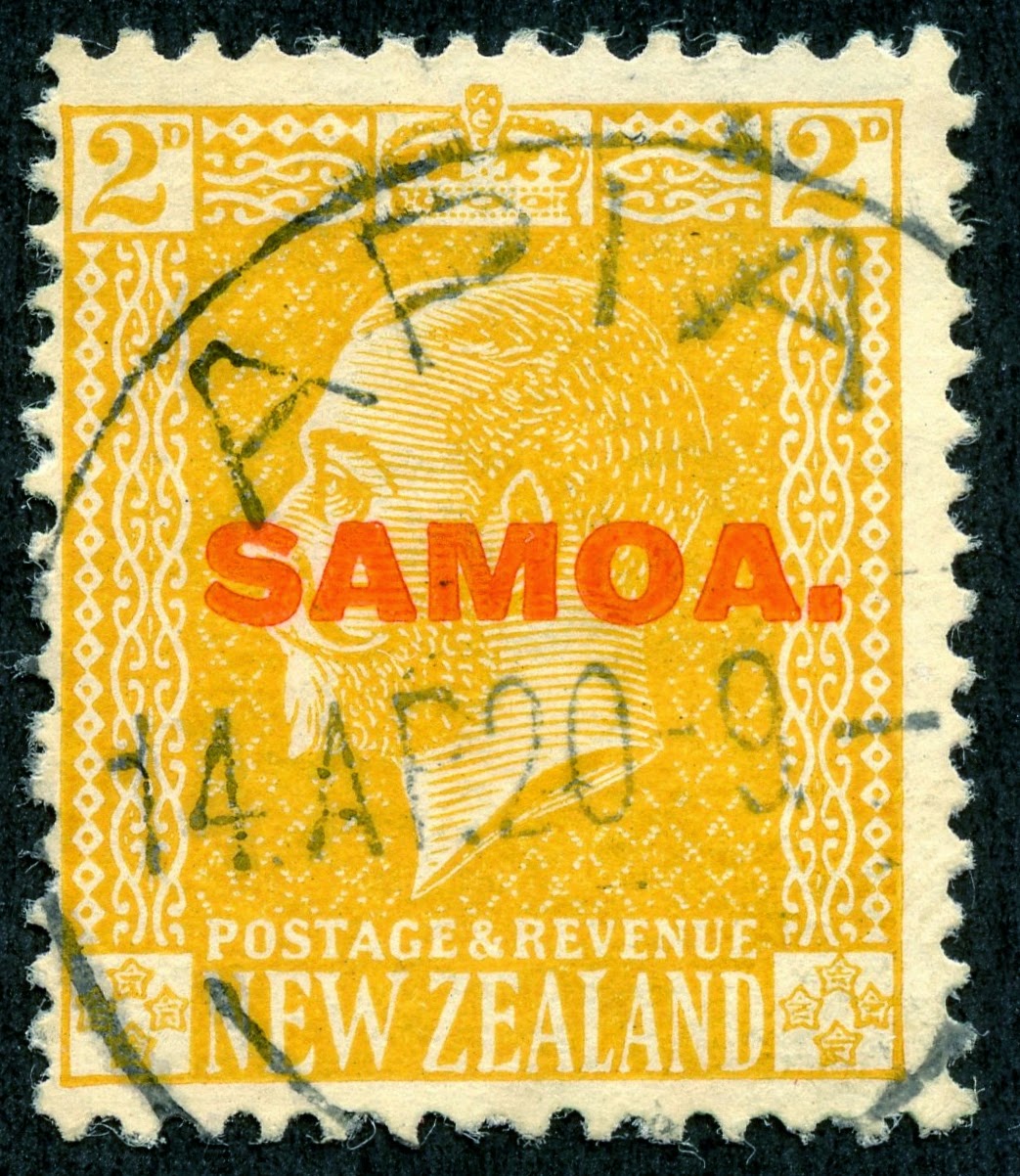 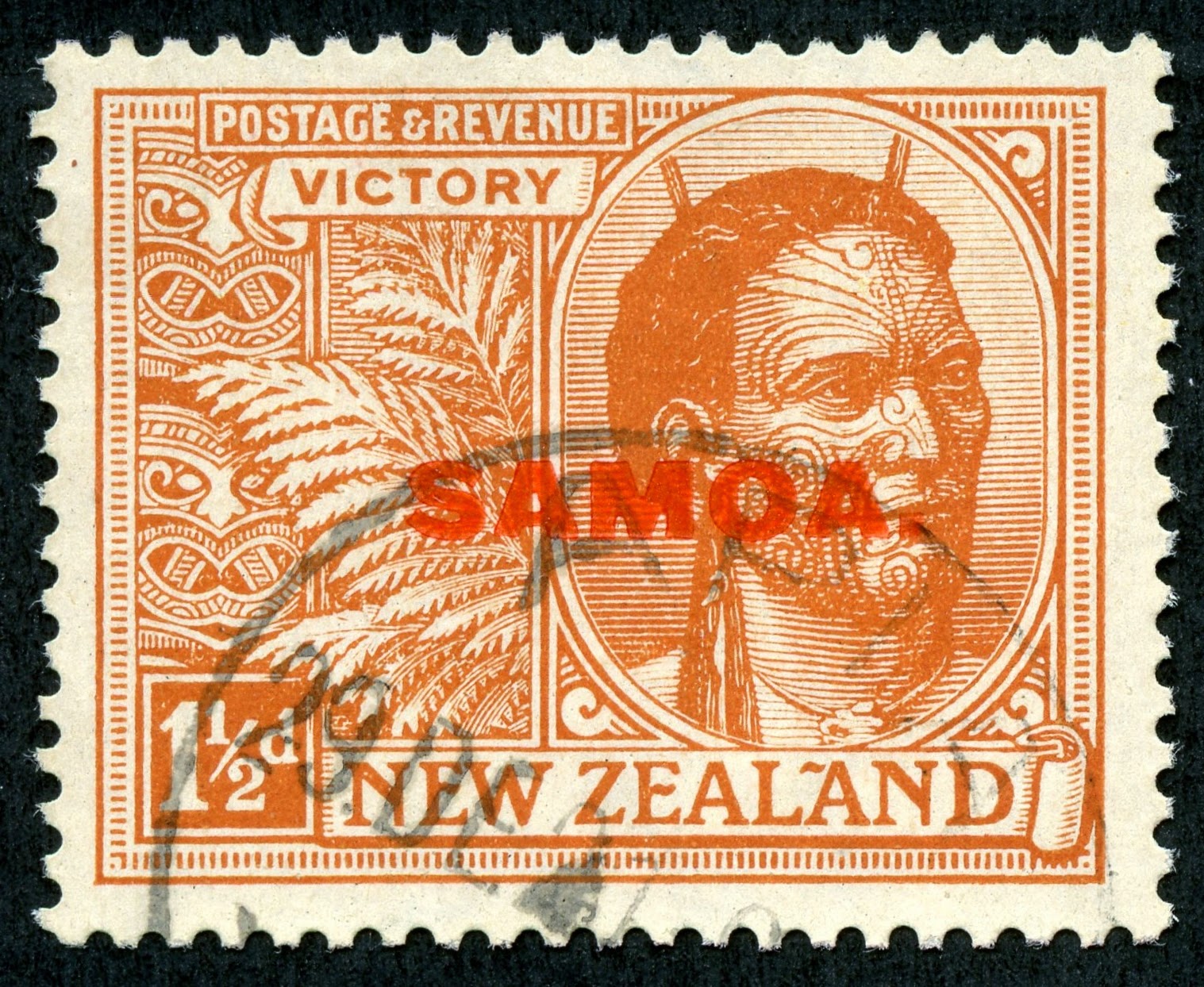 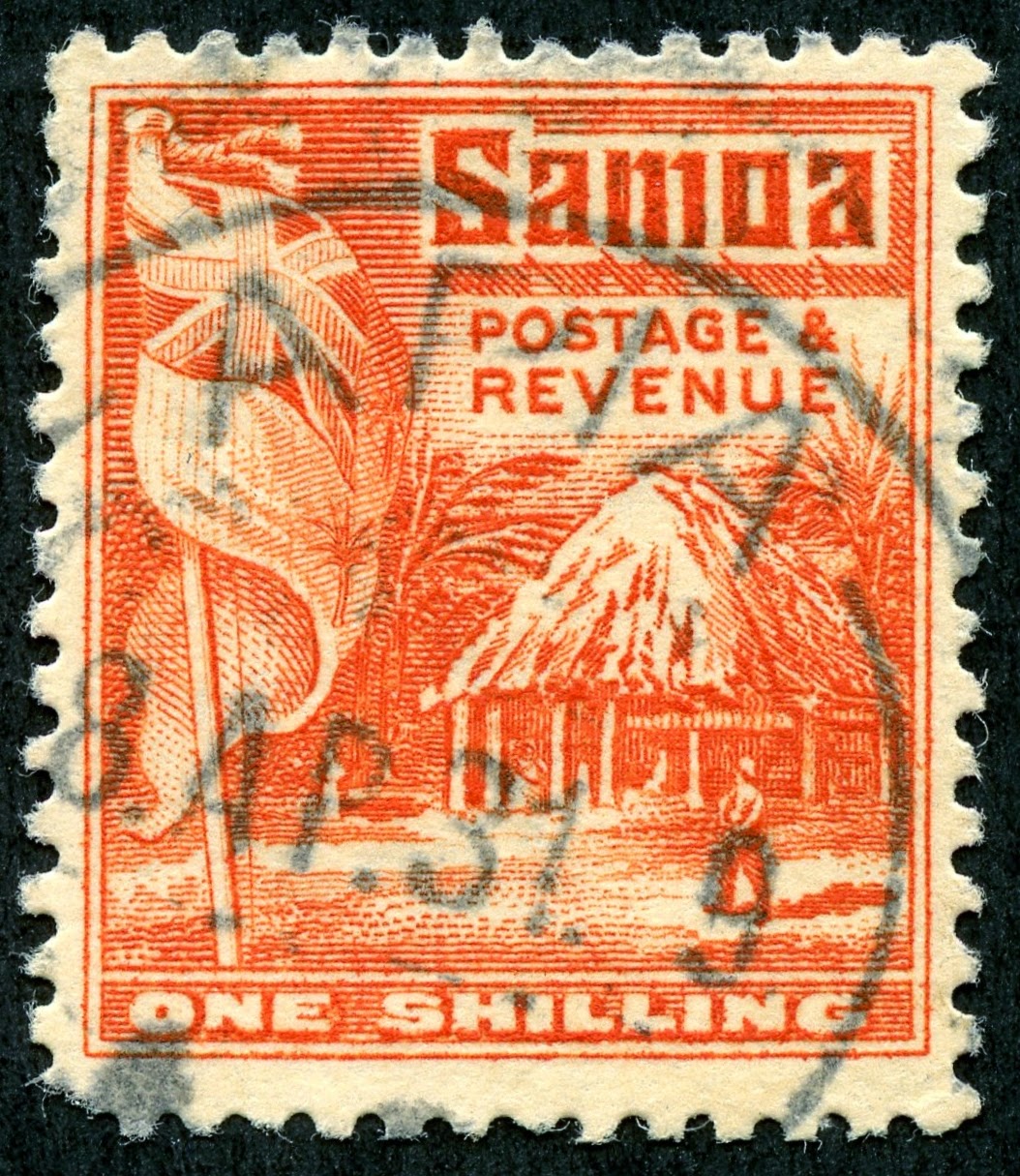 A twelve stamp set showing a "British" flag and a Samoan house was issued on December 23, 1921. This was little more than a year (December 17, 1920) after New Zealand/United Kingdom received a Class C Mandate to administer, "as part of their territory", the former German Samoa. The territory was then named a United Nations trust territory on January 25, 1947, until independence on January 1, 1962. 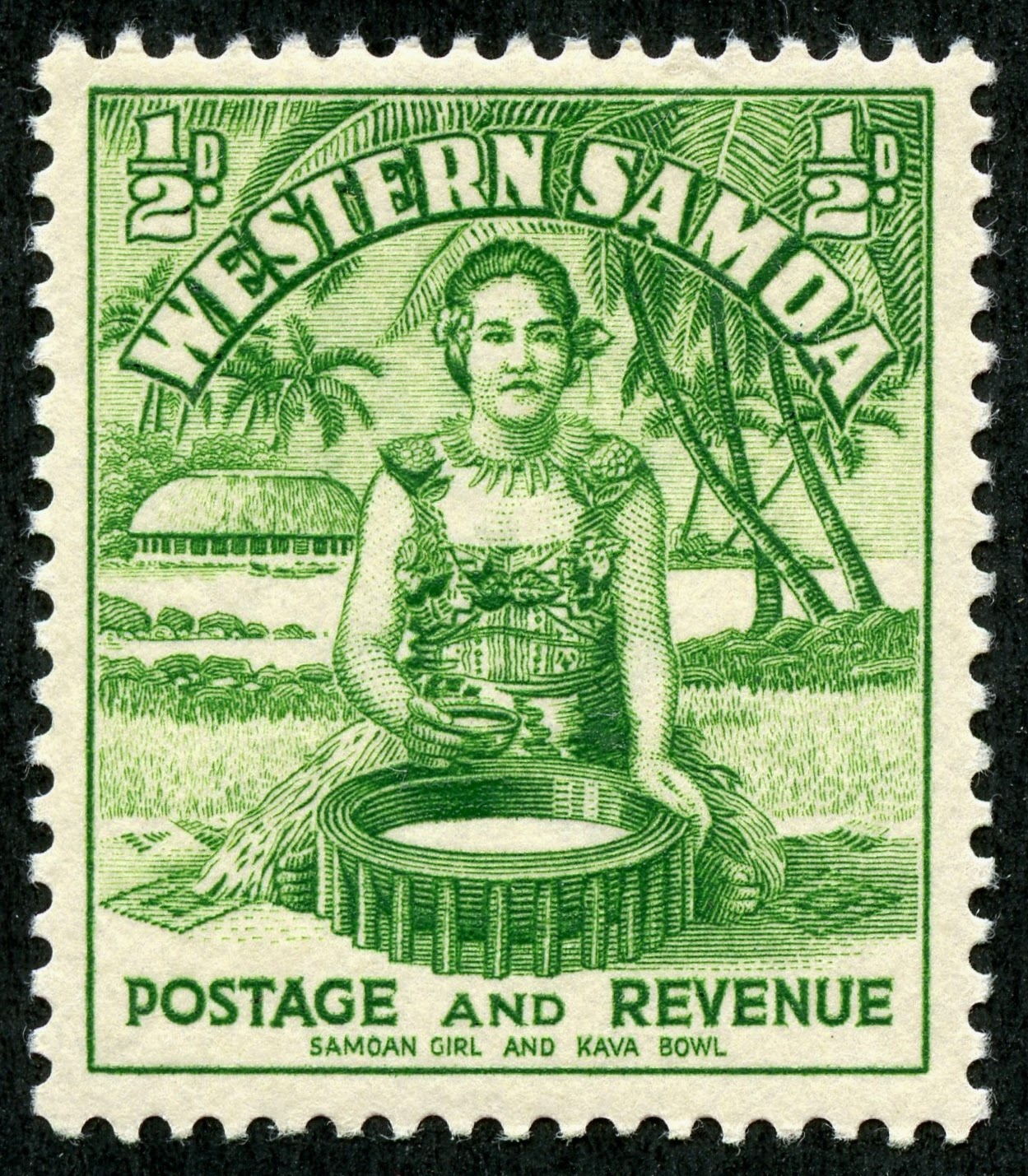 This is an engraved issue, and some are bi-colored- really lovely. 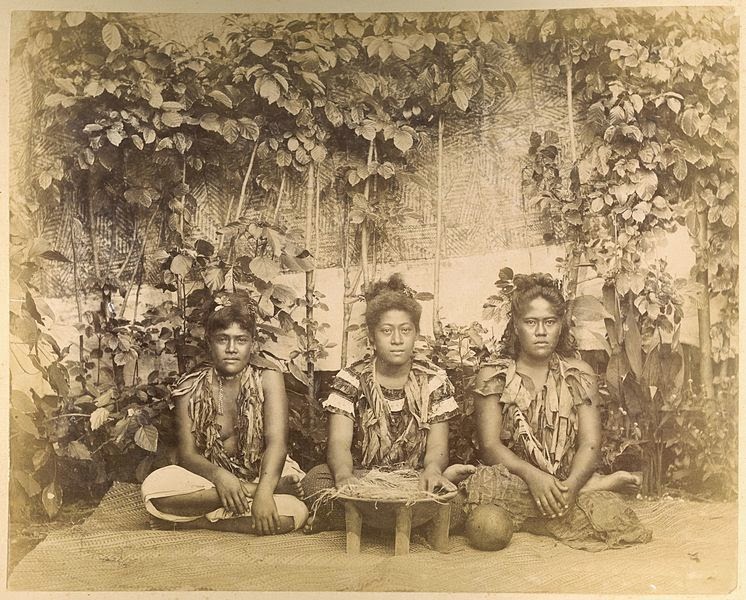 Samoan Women preparing to make Kava, 1890
The Kava cermony (called 'ava) is a solemn ritual and an important way to mark special occasions in Samoan culture. (Most Polynesian cultures have various ceremonial traditions on drinking Kava.)

The 'ava is made from the dried roots of the plant Piper Methysticum.

It has sedative and and anesthetic qualities. 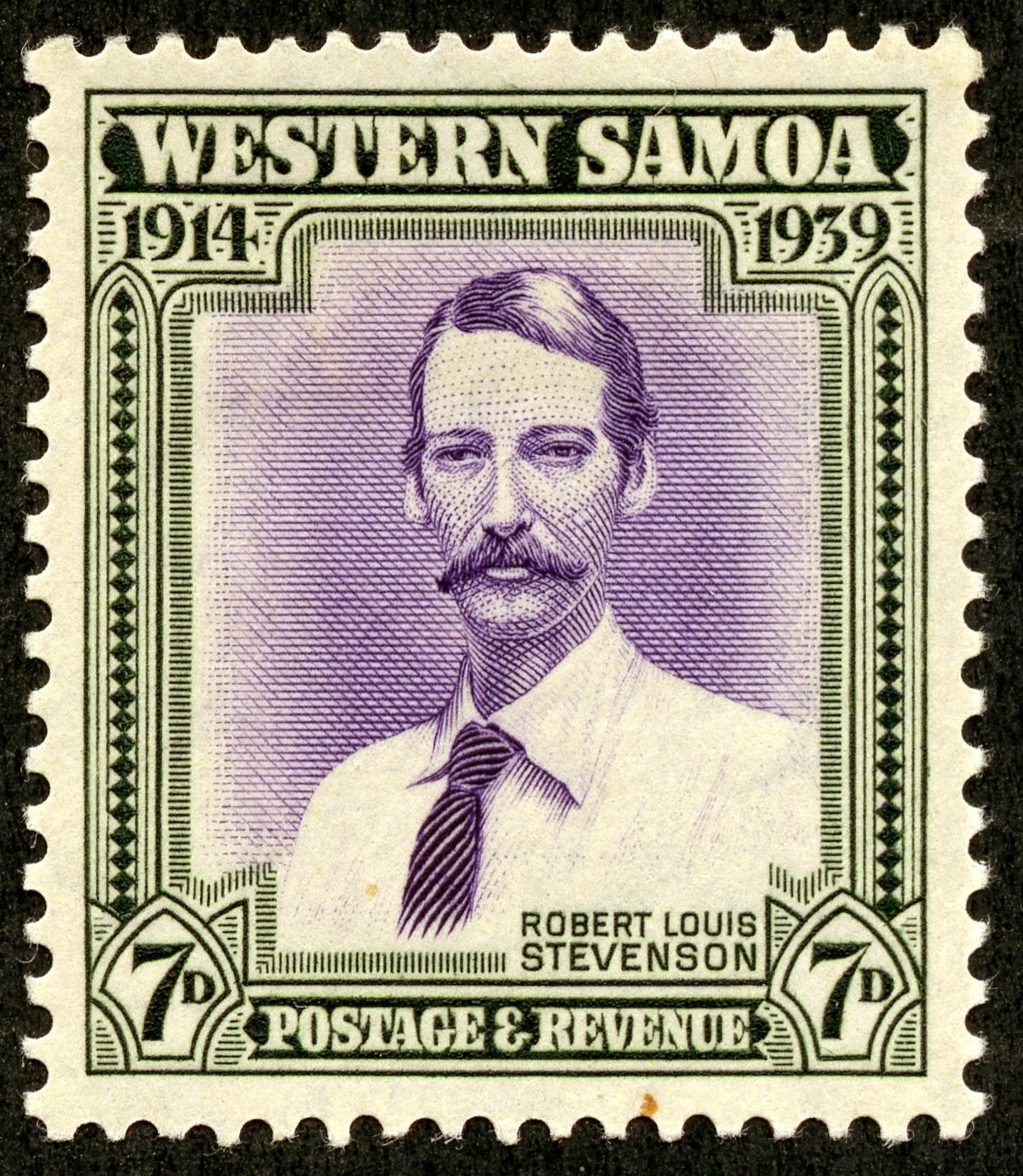 1939 Scott 184 7p deep slate green & violet
"Robert Louis Stevenson"
Extra points if the reader was aware than Robert Lewis Stevenson spent the last years of his life in Samoa, and died and has his tomb there.!

Of course, he was author of fantasy adventure novels such as Treasure Island and Kidnapped, and who can forget Strange Case of Dr Jekyll and Mr Hyde?

I read them as a child, as did most children. I wonder if they are still read? 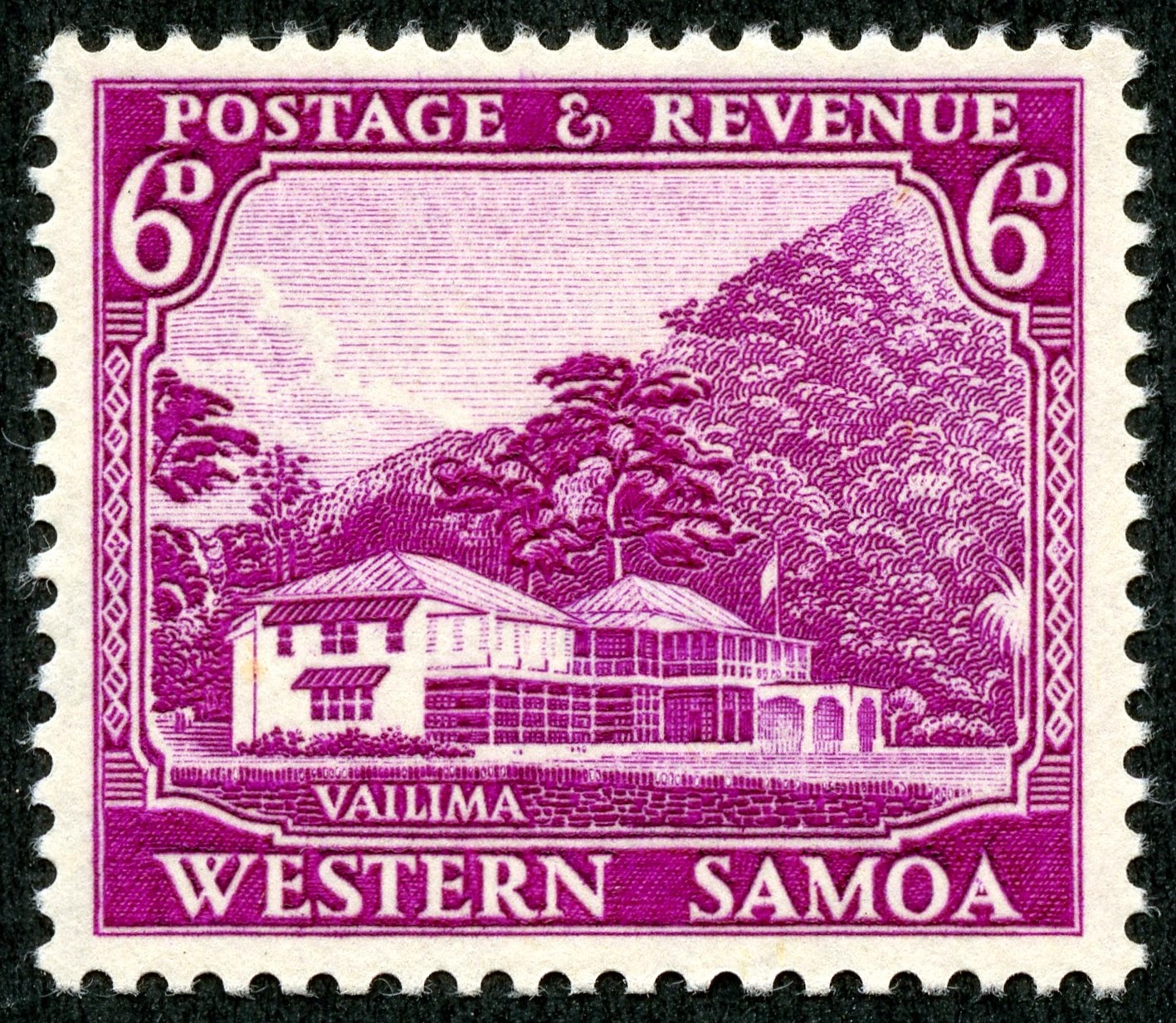 In 1890, he bought 400 acres in Upolu, and established his estate at "Vailima". He took a native name Tusitala ("Teller of Tales"). He became upset with how the Samoans were treated by the European officials, and he became involved with local politics. 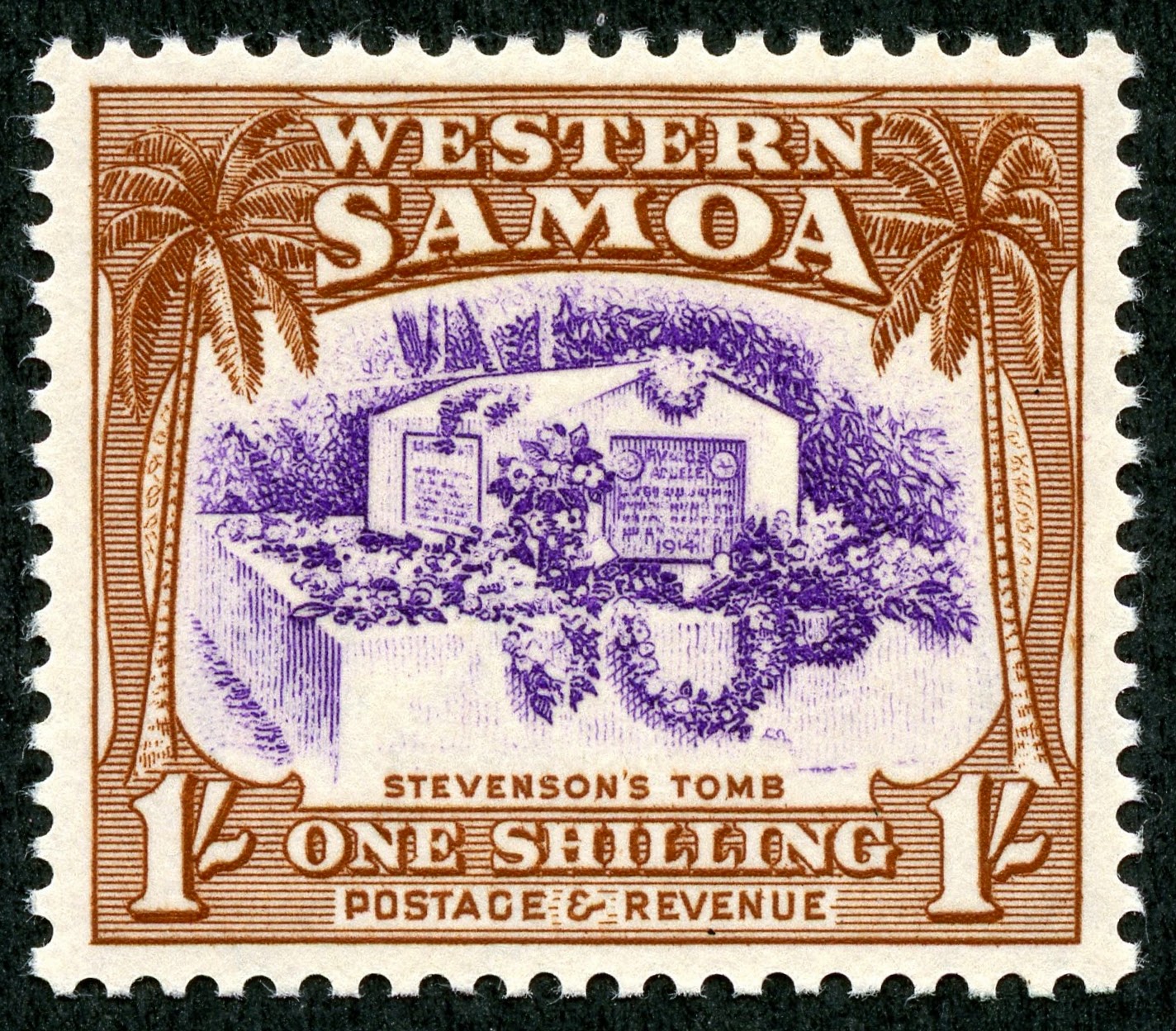 He is buried on Mount Vaea overlooking the sea.

Under the wide and starry sky,
Dig the grave and let me lie.
Glad did I live and gladly die,
And I laid me down with a will.
This be the verse you grave for me:
Here he lies where he longed to be;
Home is the sailor, home from sea,
And the hunter home from the hill.

Stevenson is still beloved by Samoans. 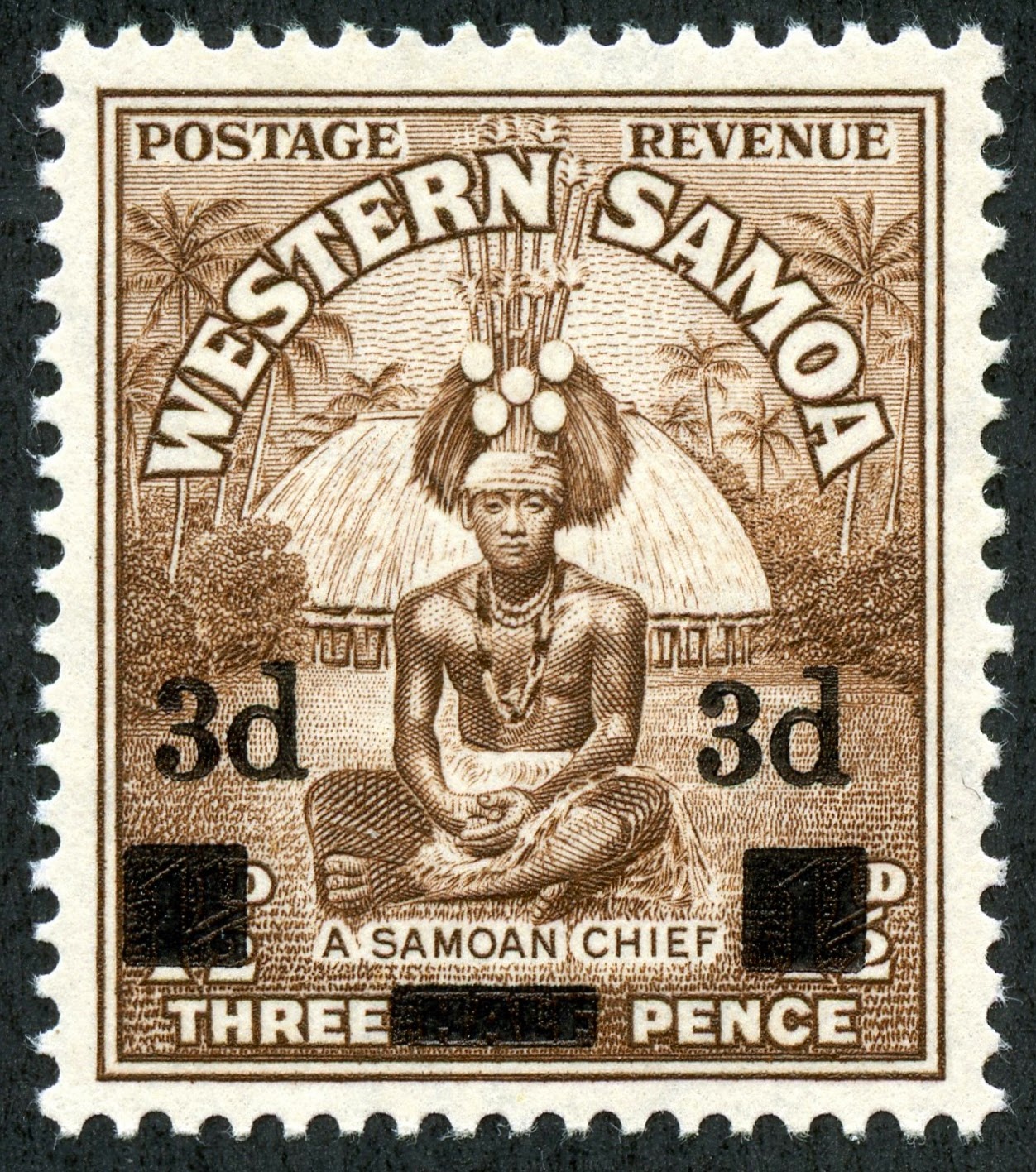 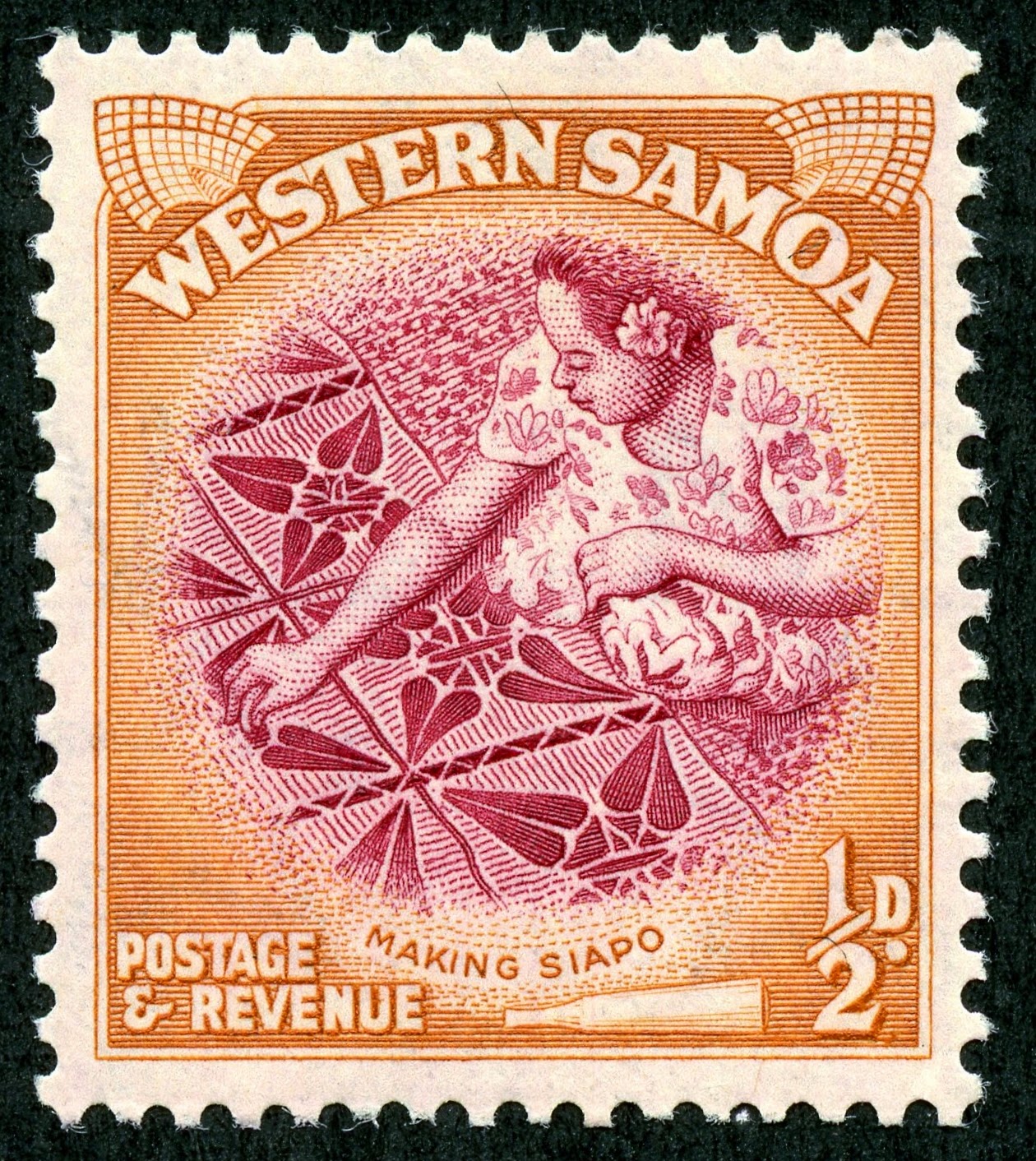 1952 Scott 203 1/2p orange brown & claret
"Making Siapo Cloth"
Saipo cloth- or tapa cloth- is actually made from Mulberry family bark. After the cloth is ready and dried, it is decorated with traditional designs- such as trochus shell, starfish, and rolled pandanus leaves. 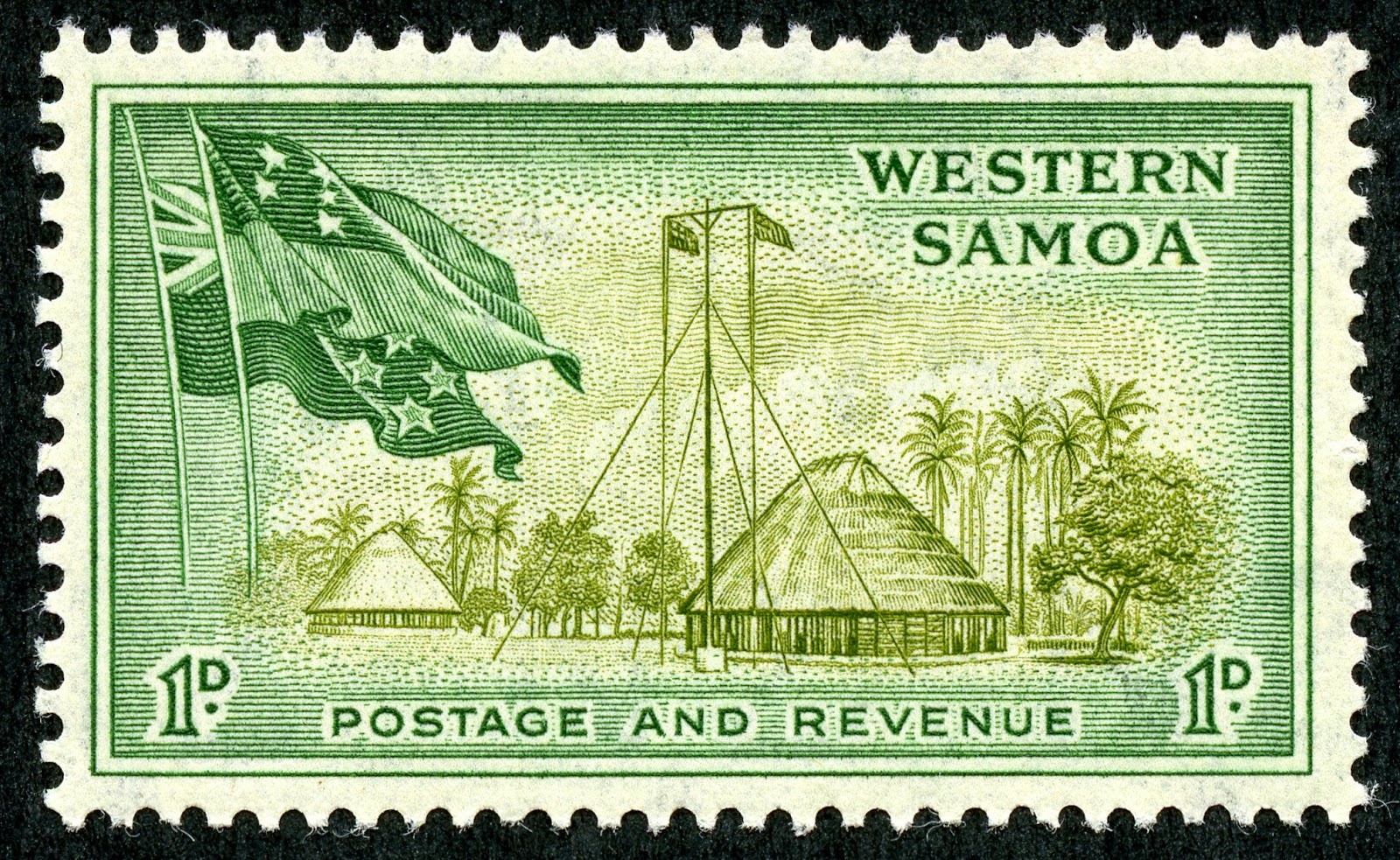 1952 Scott 204 1p green & olive
"Western Samoa and New Zealand Flags, Village"
The 1952 issue, which consists of 10 stamps, all with different scenes, is, in my view, a cut above the ordinary "British colony" output of the day. We have New Zealand inspiration to thank for that. ;-) 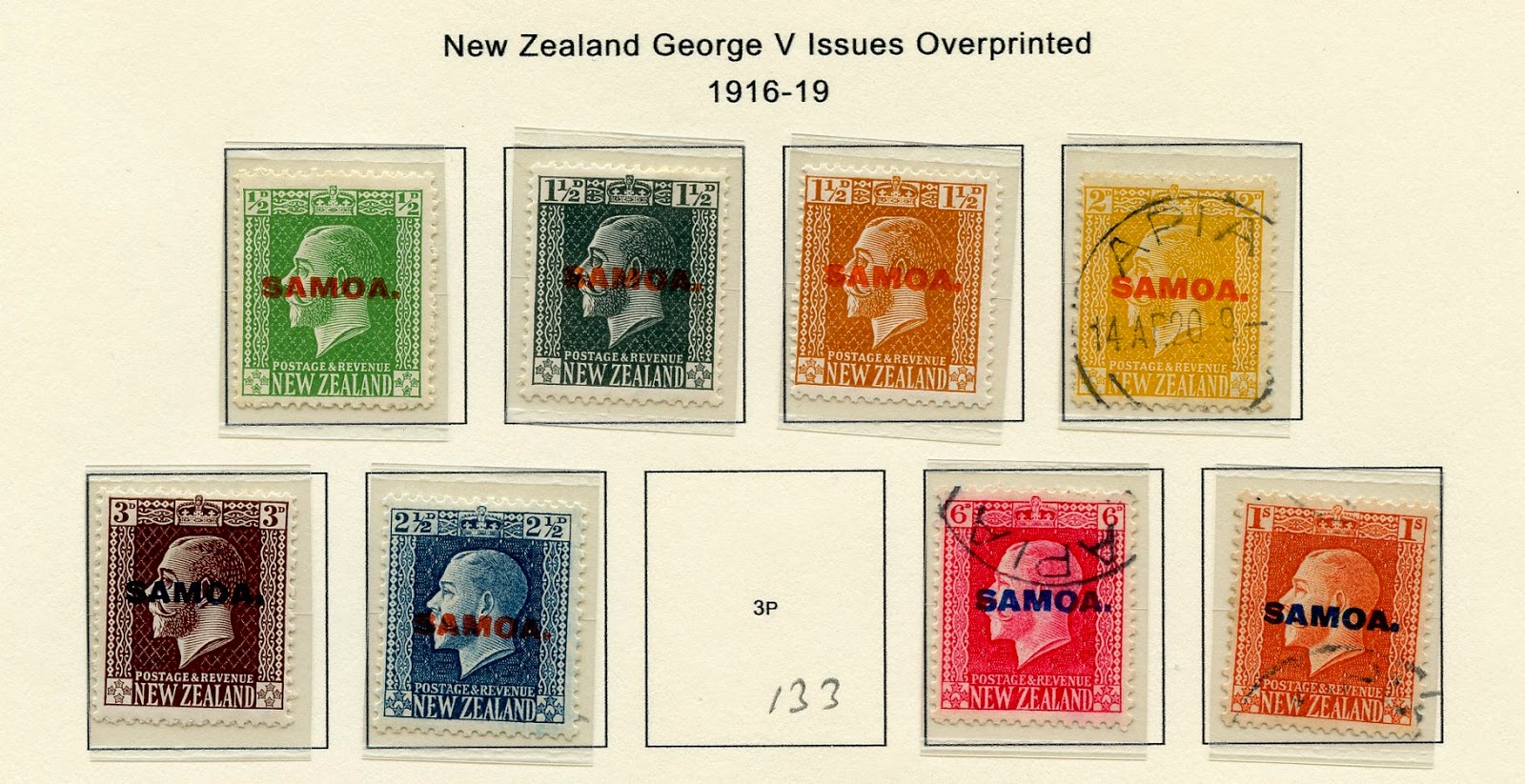 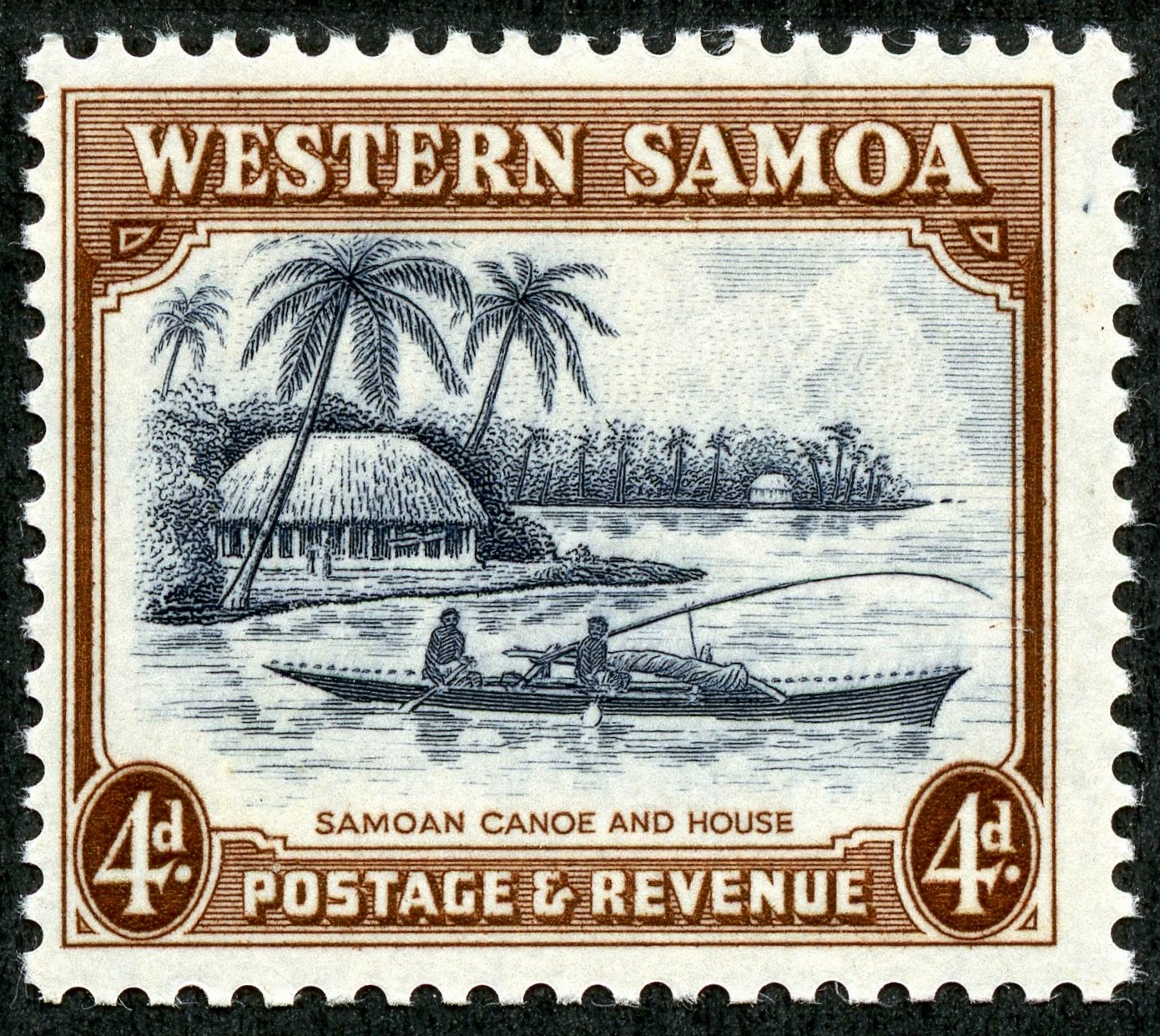 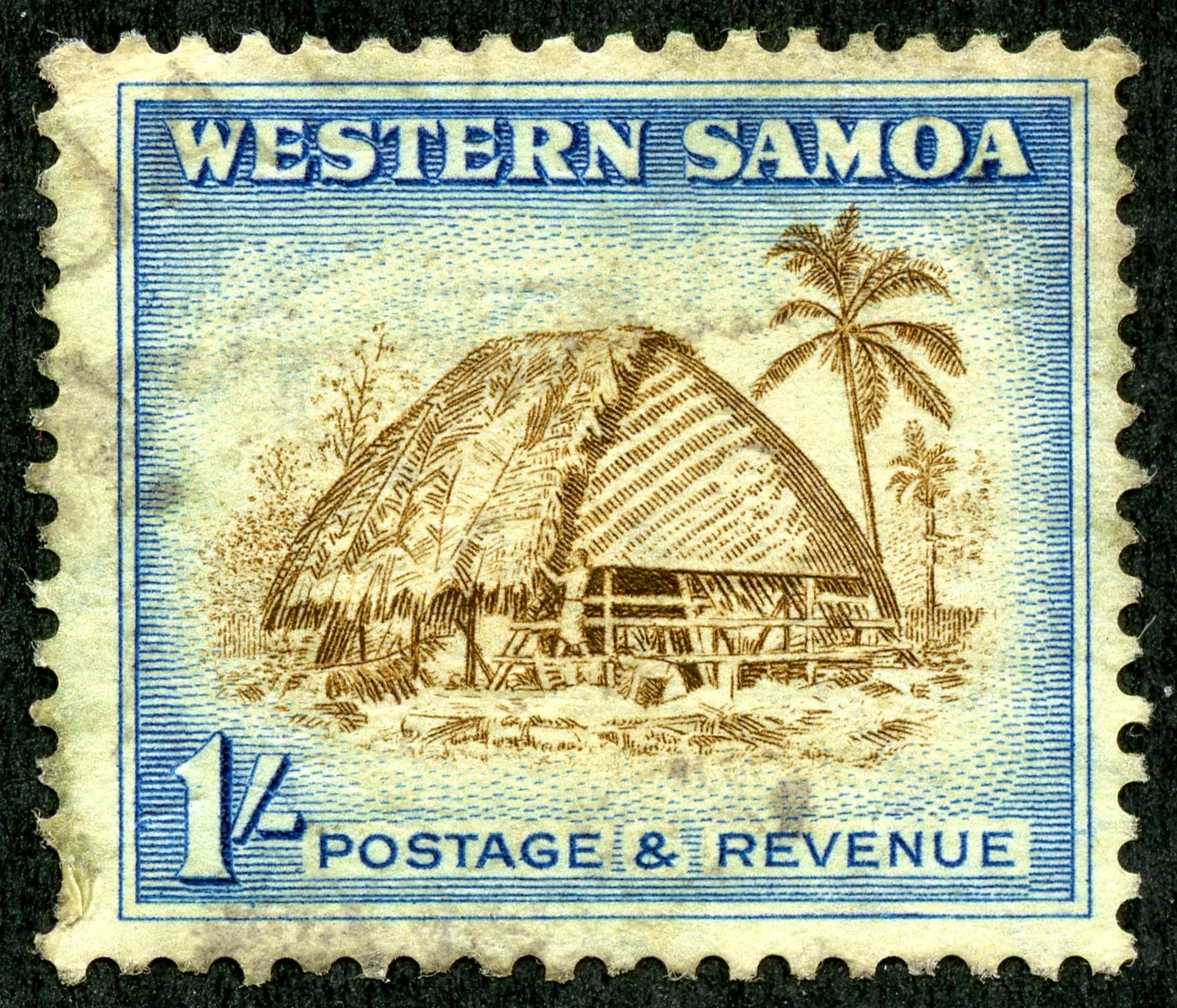 Note: Map, image pics, and Margaret Mead stamp image all appear to be in the public domain.