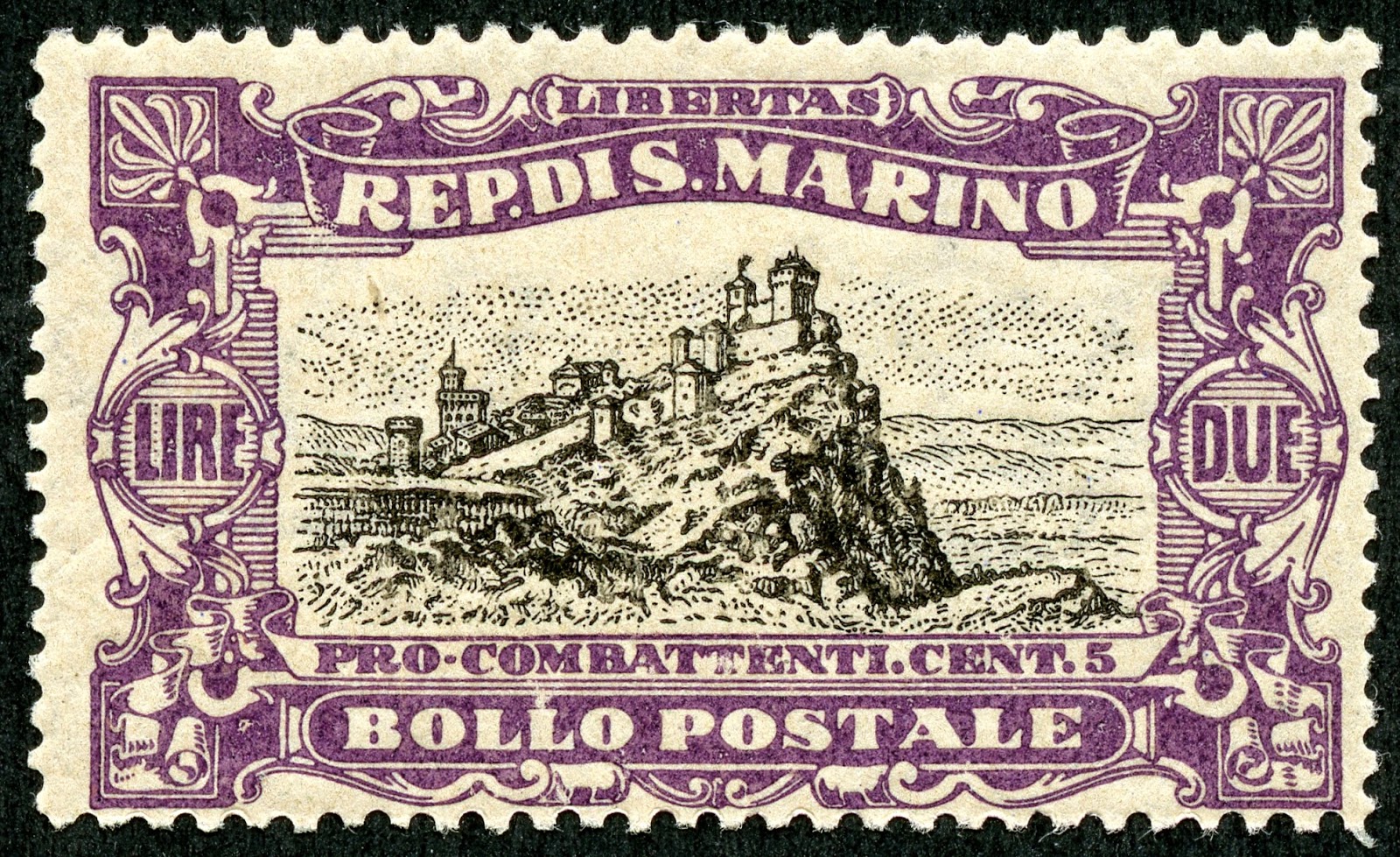 1918 Scott B10 2 l violet & black "View of San Marino"
Quick History
The Republic of San Marino, all 24 square miles of it, is located on the north-eastern side of the Apennine Mountains on the Italian Peninsula twenty miles from the Adriatic Sea, and surrounded by Italy. 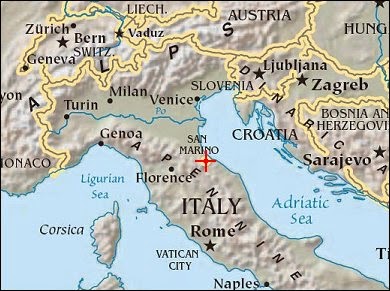 San Marino and the Italian Peninsula
Saint Marinus of Arba founded a church on Monte Titano on September 3, 301, and thereby began the city and state of San Marino.

The Papacy recognized the independence of San Marino in 1631.

The independence was threatened by Napoleon's army in 1797, but Regent Antonio Onofri, through his friendship with Napoleon, was able to protect the Republic.

When Italy unified during the 19th century, Giuseppe Garibaldi, the Italian patriot, agreed to not incorporate San Marino into the developing Italian state.

Stamps, with the "Coat of Arms" design, were introduced in 1877.

We will meet all of these historical characters through their images on San Marino stamps.

Map of San Marino
During WW I, there was diplomatic tension with both Italy and Austria-Hungary, as San Marino attempted to stay neutral.

Between 1923 and 1943, the country was under the rule of the Sammarinese Fascist Party (PFS), closely allied with the Mussolini regime. 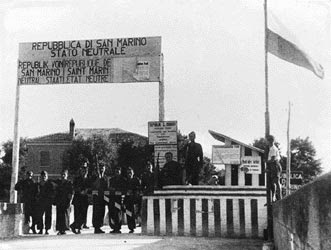 Nevertheless, the Royal Air Force bombed San Marino on June 26, 1944, killing 35 people, in the belief that the Germans were stockpiling supplies there..

In September 1944, it was occupied by German forces, who were then driven out by the Allies in the Battle of San Marino.

San Marino had a democratically elected communist government between 1945 and 1957. 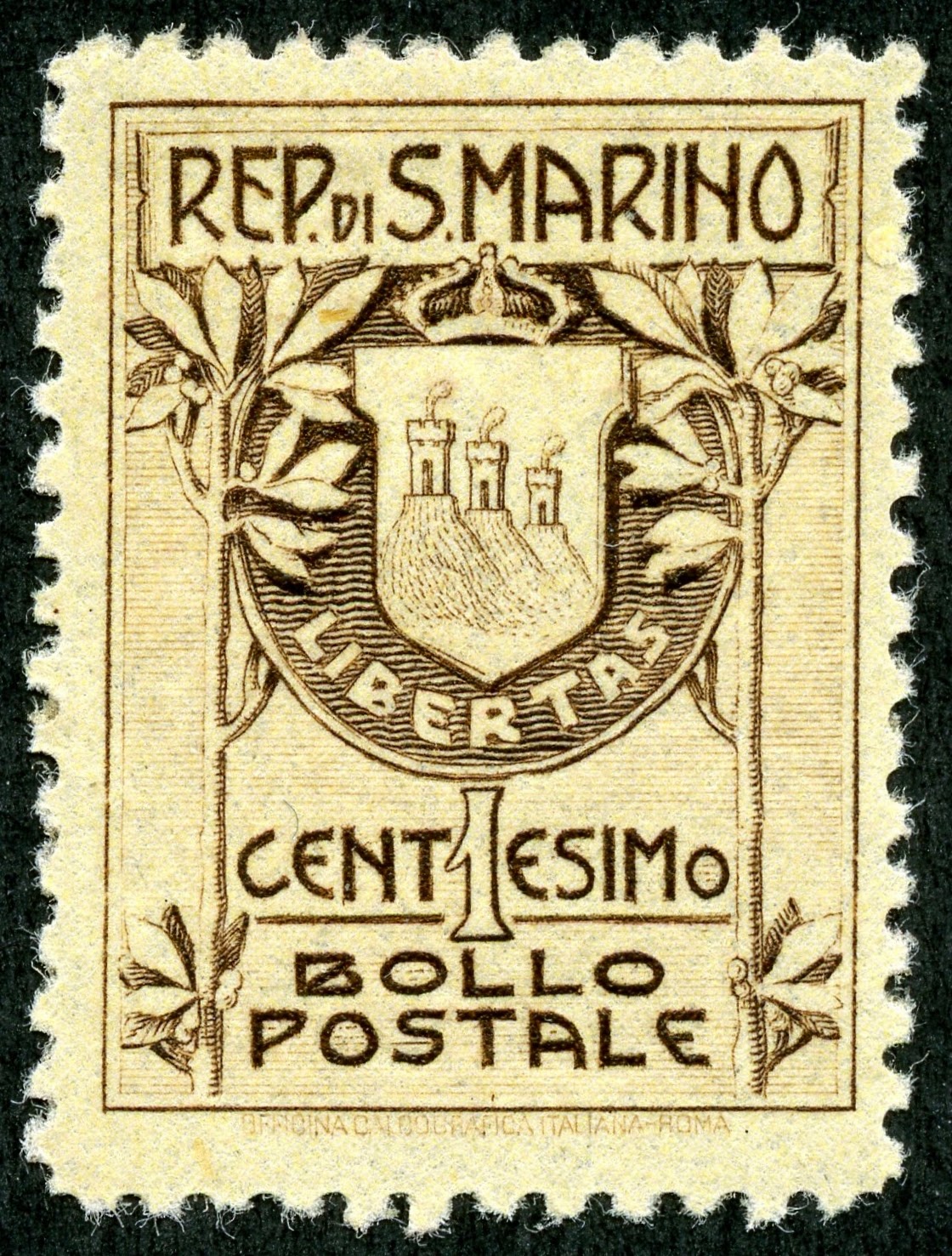 When I was much younger, I was fascinated with the "postage stamp" sized countries- Monaco, Liechtenstein, and, of course, San Marino. And it seemed like H.E.Harris knew this also. Glowing approval descriptions had their effect on the young child's imagination, until it became certain that "tiny" and "rare" were interlinked. And, I must admit, the psychology is still there. ;-) 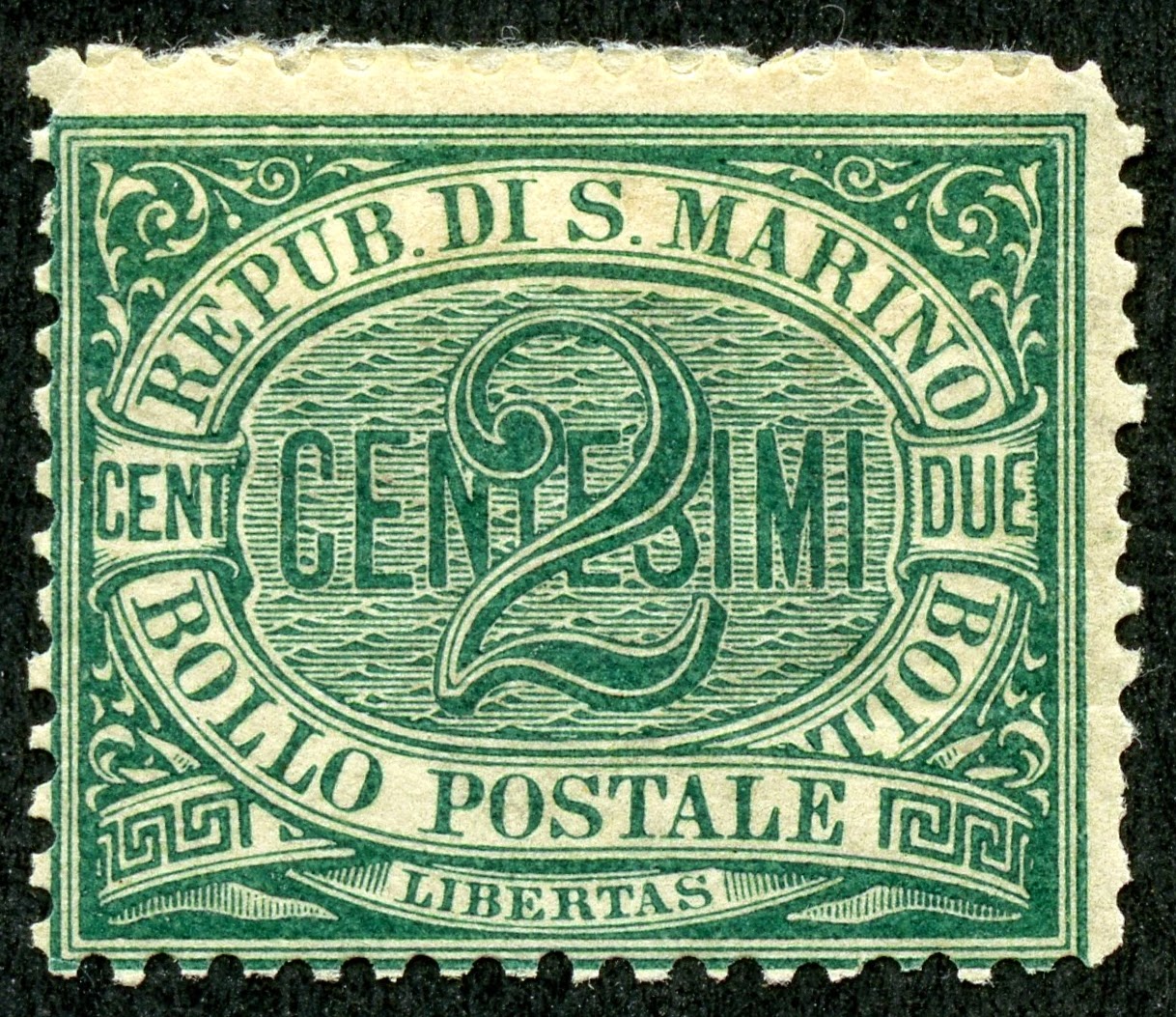 1877 Scott 1 2c green "Numeral"
"Liberty" is found on many San Marino stamps, as the tiny Republic has indeed managed that. The first typographed issue had the lower three denomination stamps with a "Numeral" design (1877-1895). 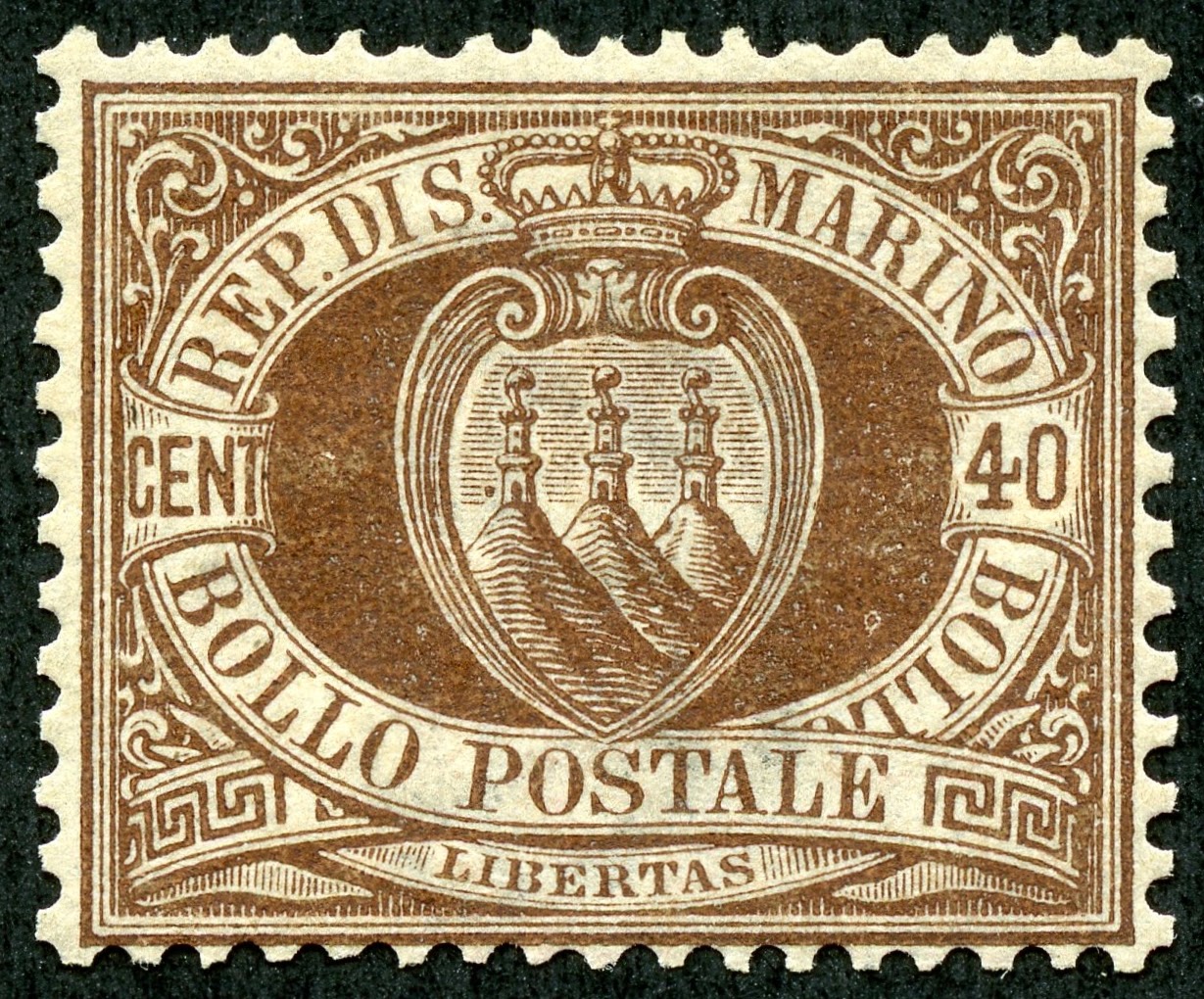 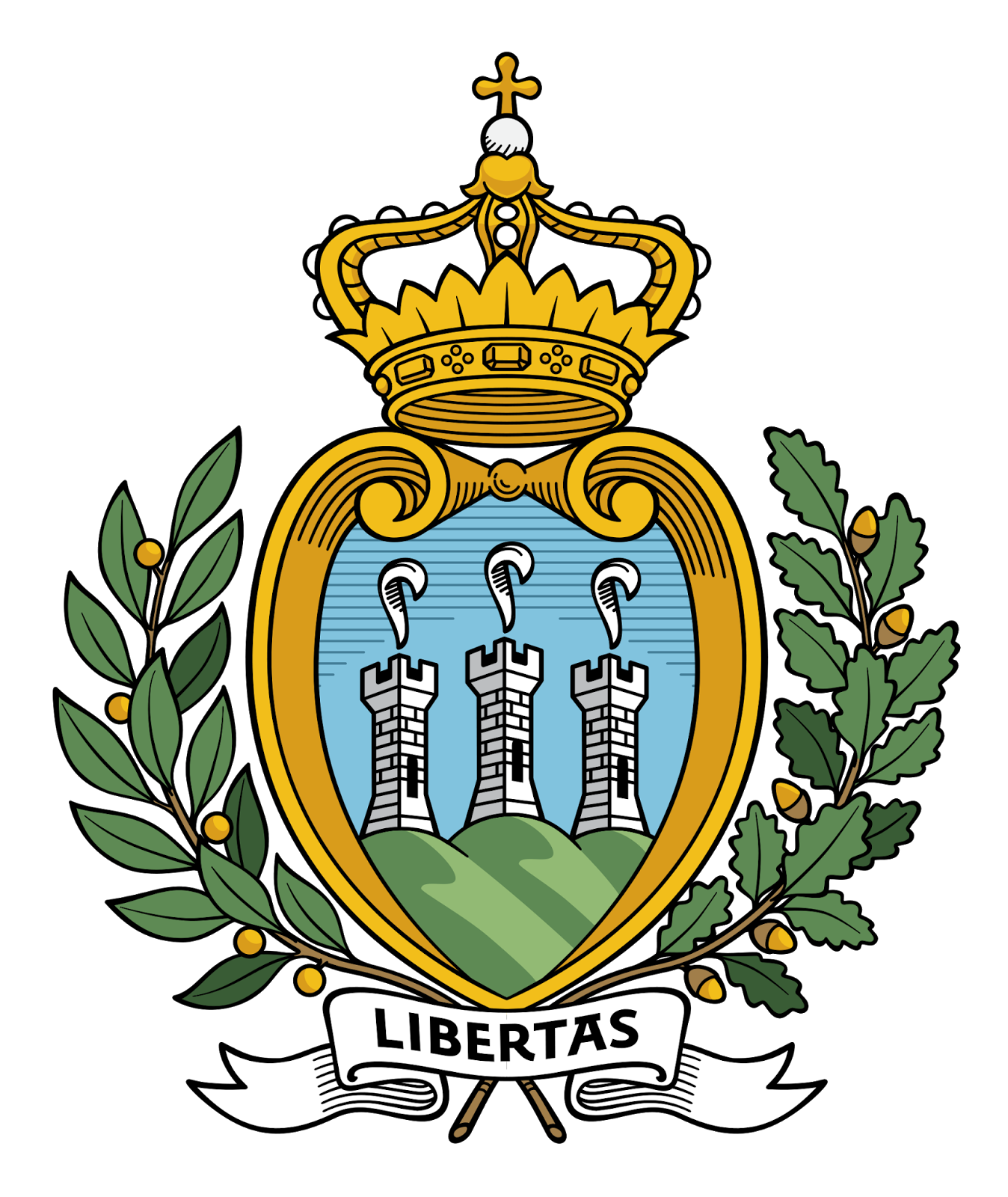 Coat of Arms of San Marino
The COA features three hills --the three summits of Monte Titano. On them are three towers- the citadels La Guaita, La Cesta, and La Montale. Each has an ostrich feather design weather vane on top. 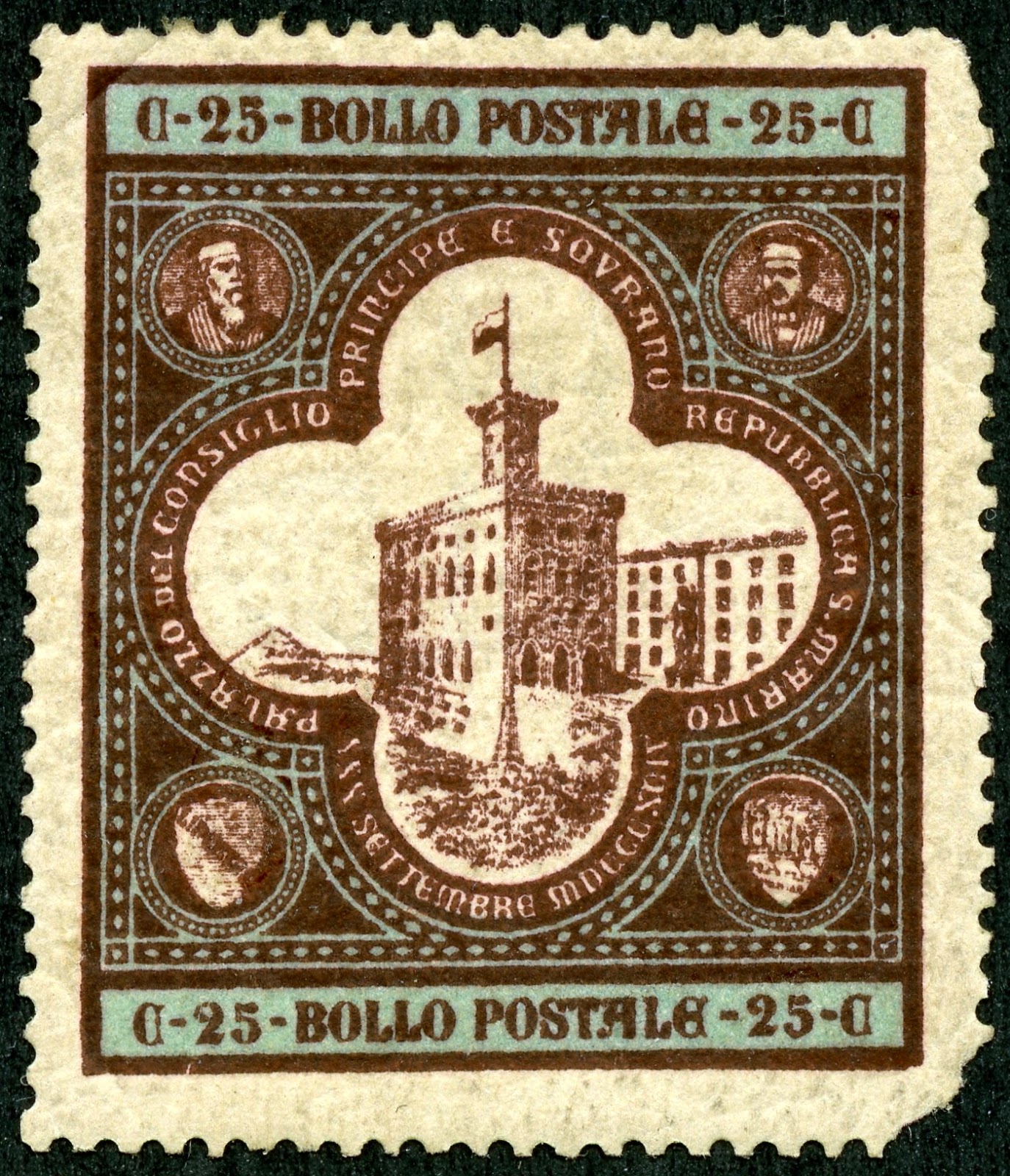 1894 Scott 29 25c blue & dark brown
"Government Palace"
For the opening of the new Government Palace, and the installation of new Regents, a  three stamp bi-color lithographed issue was released in 1894. 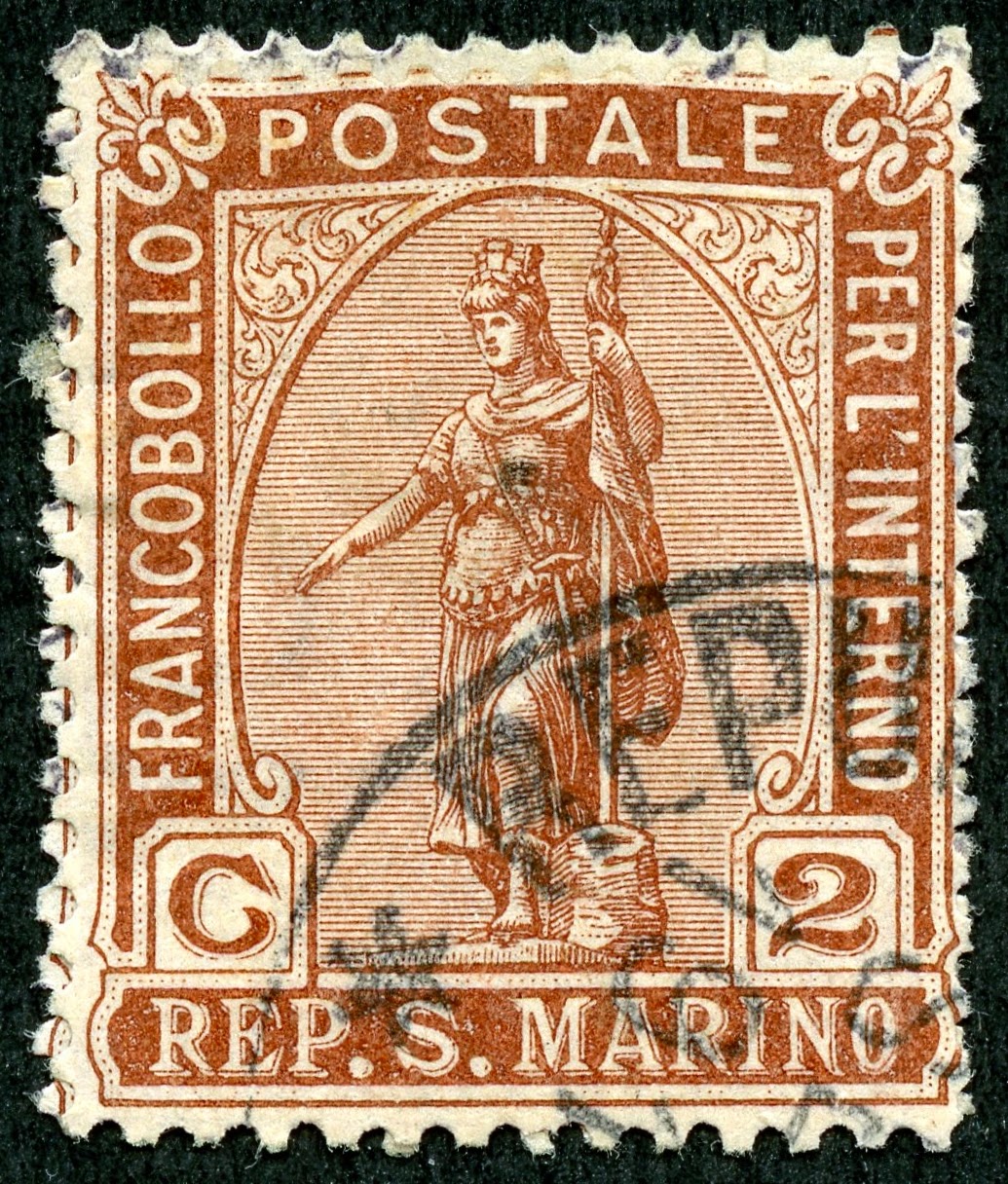 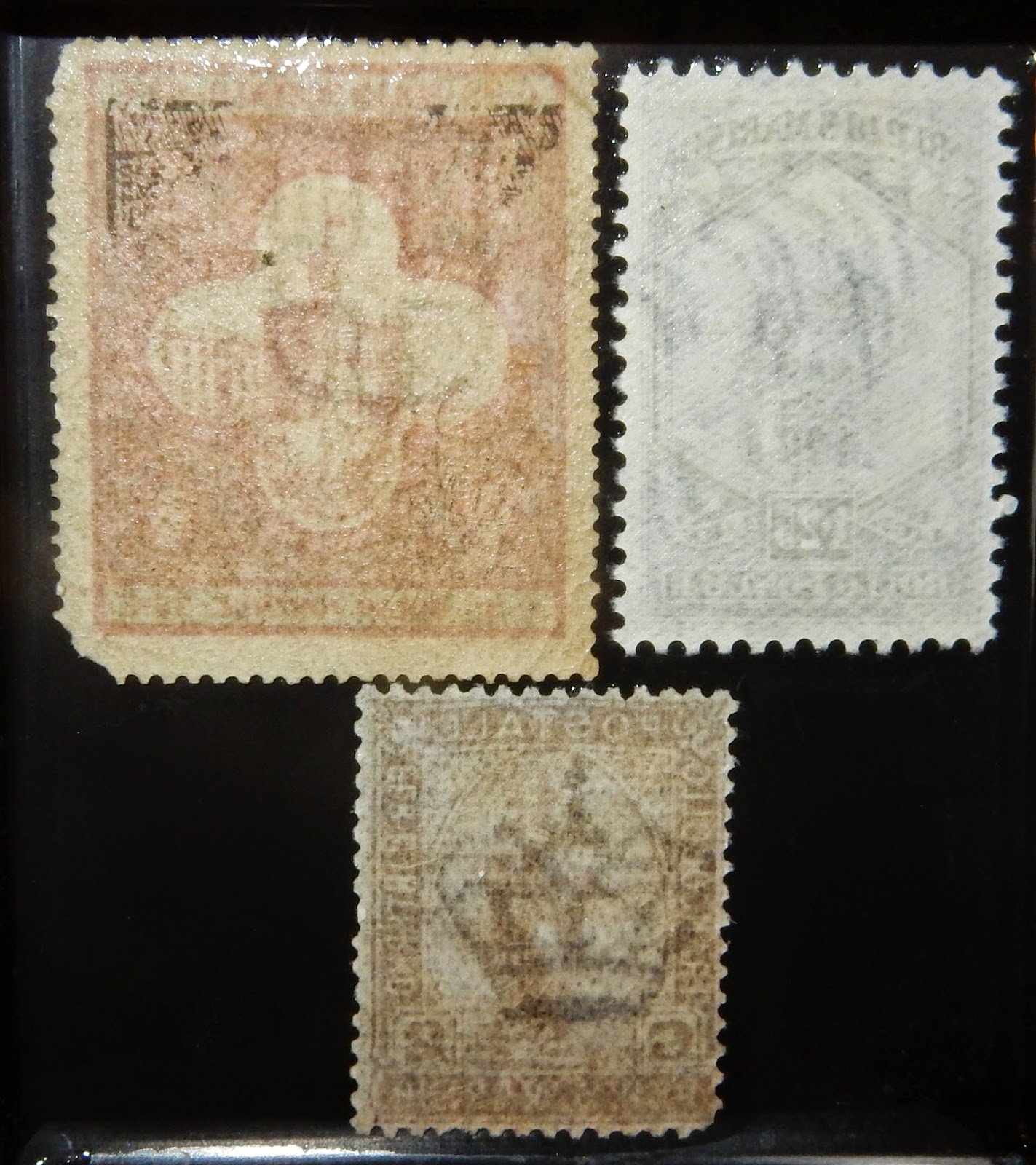 Watermarks
Top Left: Wmk 174 "Coat of Arms"; Top Right: Wmk 217 "Three Plumes"
Bottom: Wmk 140 "Crown"
San Marino has some issues that are unwatermarked, while other discrete and different issues are watermarked. (In other words, one will not find the same stamp issue on both watermarked and unwatermarked paper.)

Here are the three watermarks that can be found for the classical era.

The "Statue of Liberty" issue shown above has the "Crown" watermark. The 1894 "Government Palace" issue, already illustrated, has the "Coat of Arms" watermark, which has a shield with a large cross in the center. Finally, the "Three Plumes" watermark can be found on issues after 1929.

Since there is no confusion, fortunately, in terms of identification for a specific issue, I will say no more about unwatermarking/watermarking. 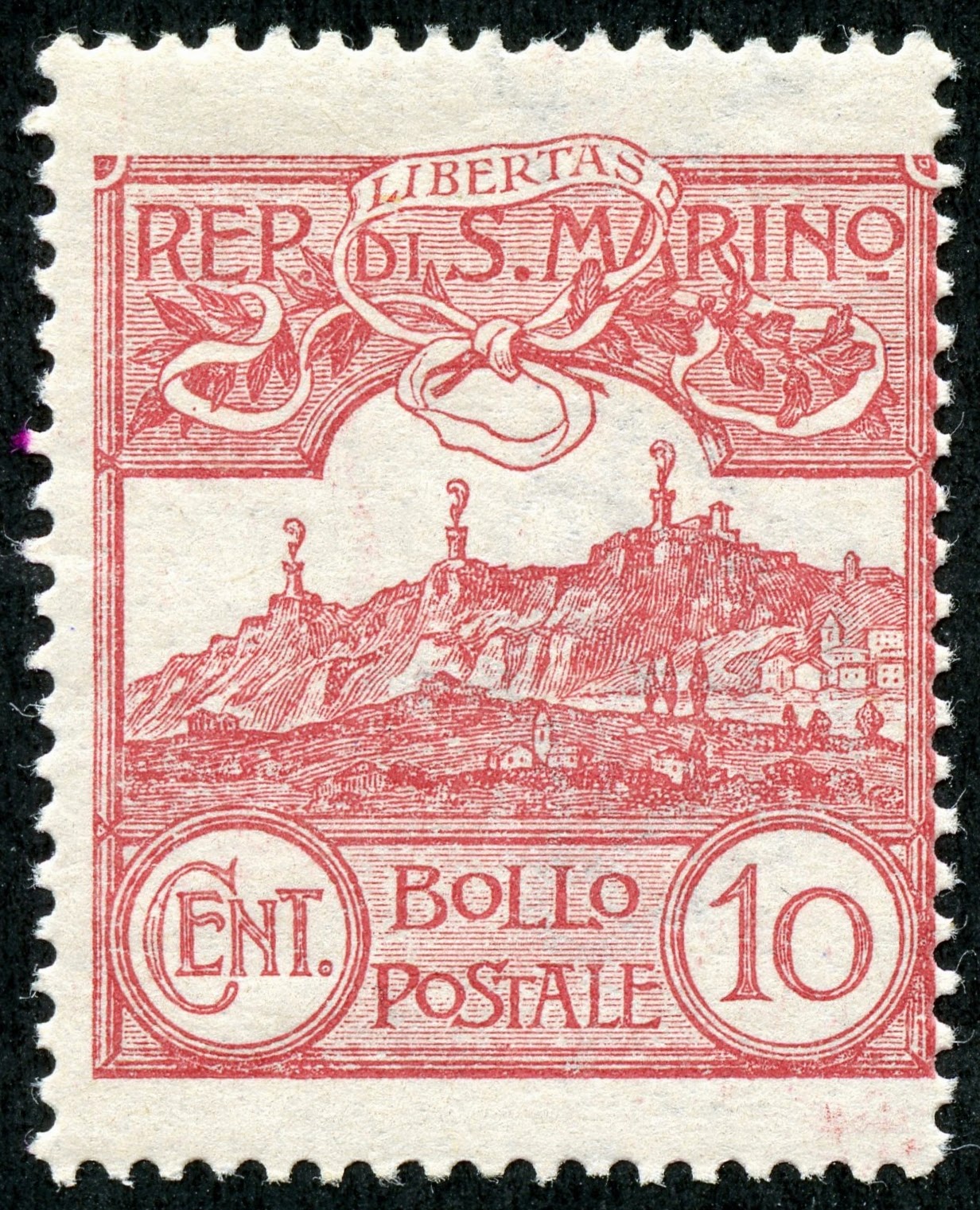 I should mention that, for many of the earlier issues of San Marino, the perfs often cut into the design. 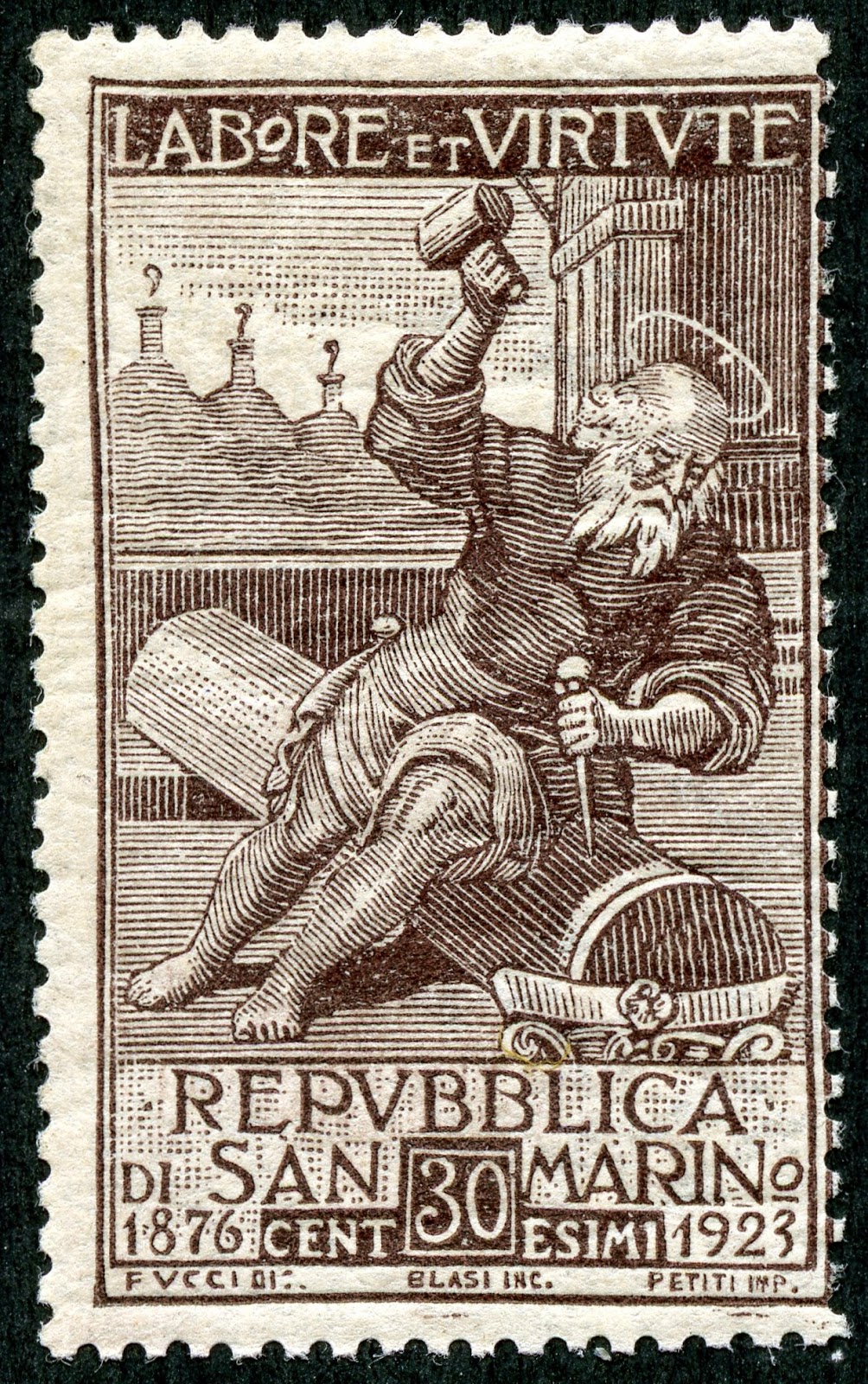 1923 Scott 81 30c dark brown
"St. Marinus"
Marinus, a stonemason by training, fled to Mt. Titano to live as a hermit, and founded a monastery and chapel in 301. When he died in 366, legend says he uttered "I leave you free from both men". The cryptic phrase was interpreted as referring to the two powers of the day, the Emperor and the Pope. The "Freedom Affirmation", even if apocryphal,  has been the inspiration for tiny San Marino to continue going their own way. 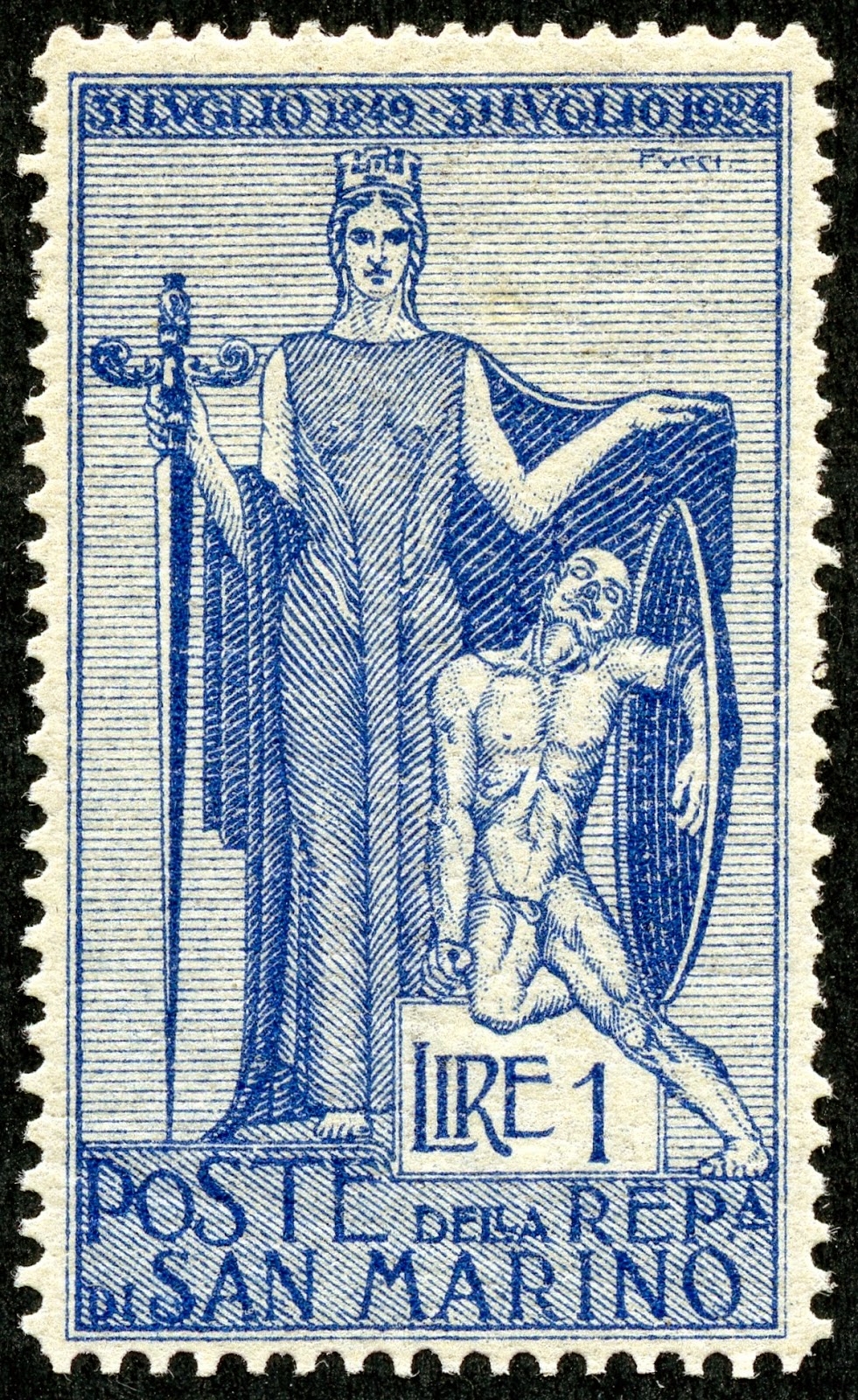 1924 Scott 87 1l deep blue
"San Marino Sheltering Garibaldi'
When the Italian patriot for unification, Giuseppe Garibaldi, needed help, San Marino offered shelter and refuge. For this, Garibaldi, in turn, acceded to the wishes of the inhabitants of San Marino to not be incorporated into the new Italian state.

For the 75th anniversary of Garibaldi taking refuge in San Marino, a five stamp issue was released in 1924. 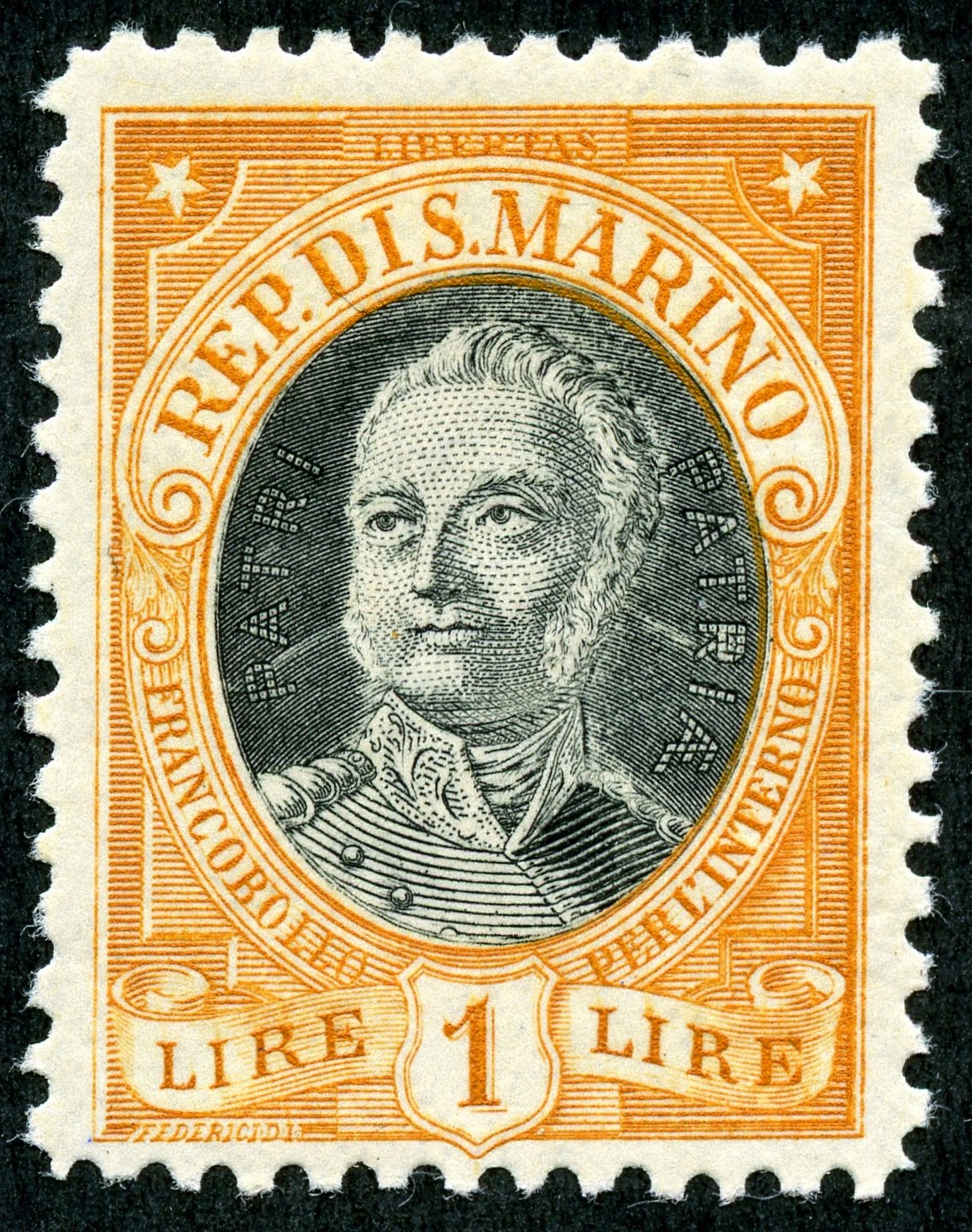 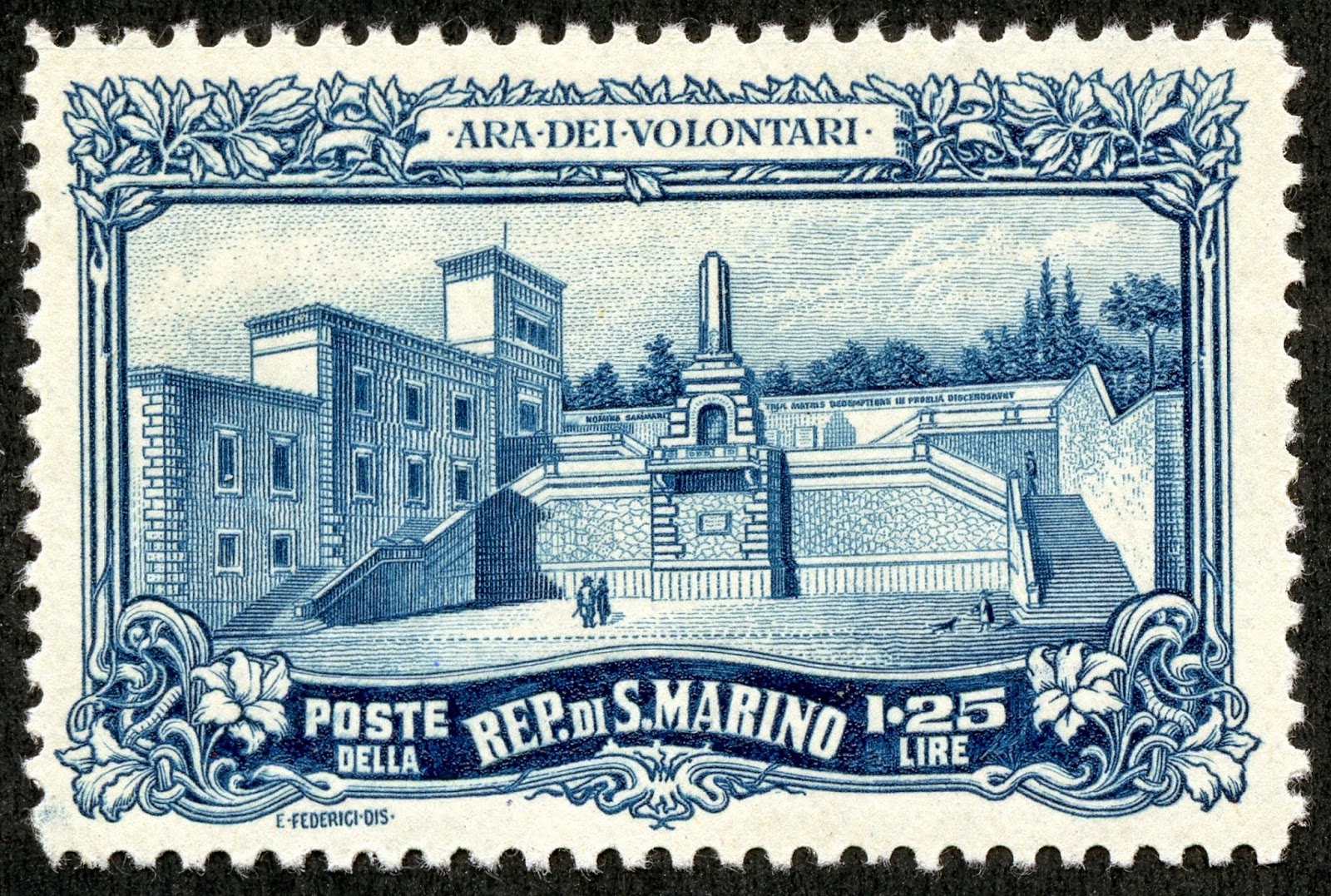 1927 Scott 109 1.25l blue "War Memorial"
Although San Marino was neutral during WW I, a group of San Marino volunteers did join Italian forces. A three stamp set was issued in 1927 in their memory. 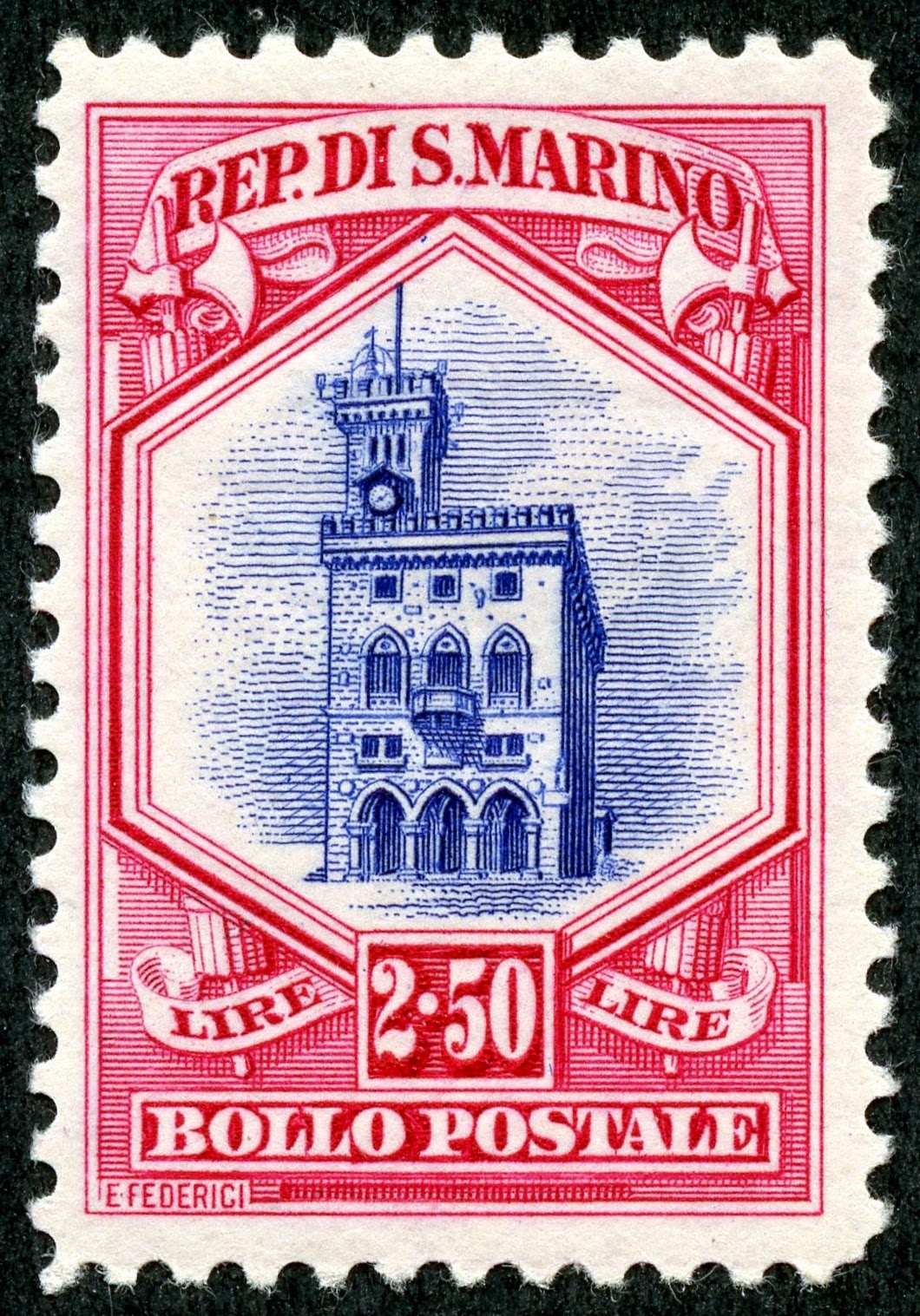 Please click on and enlarge the 2.50 lire carmine rose & ultramarine stamp illustrated above, and just enjoy! 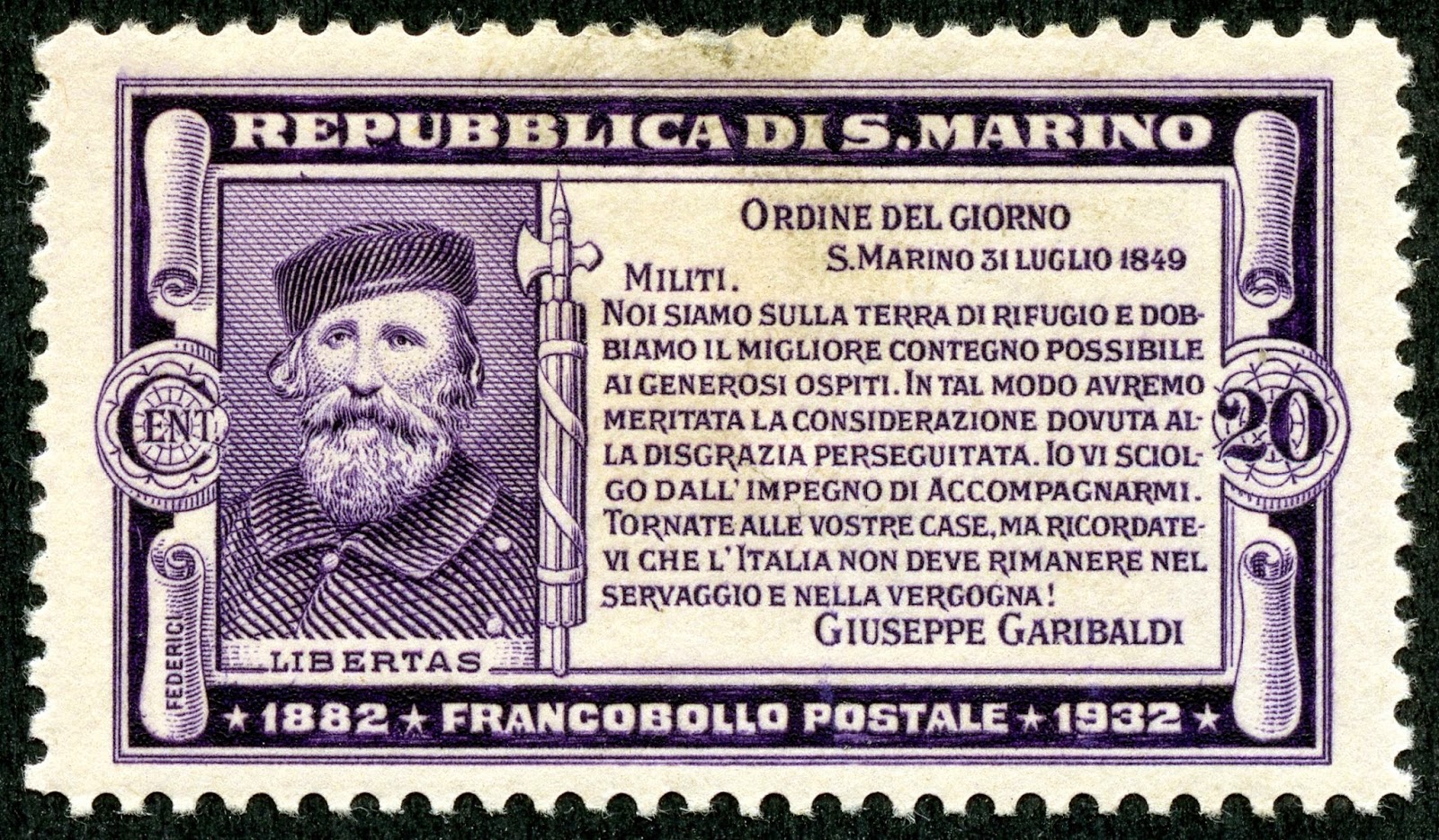 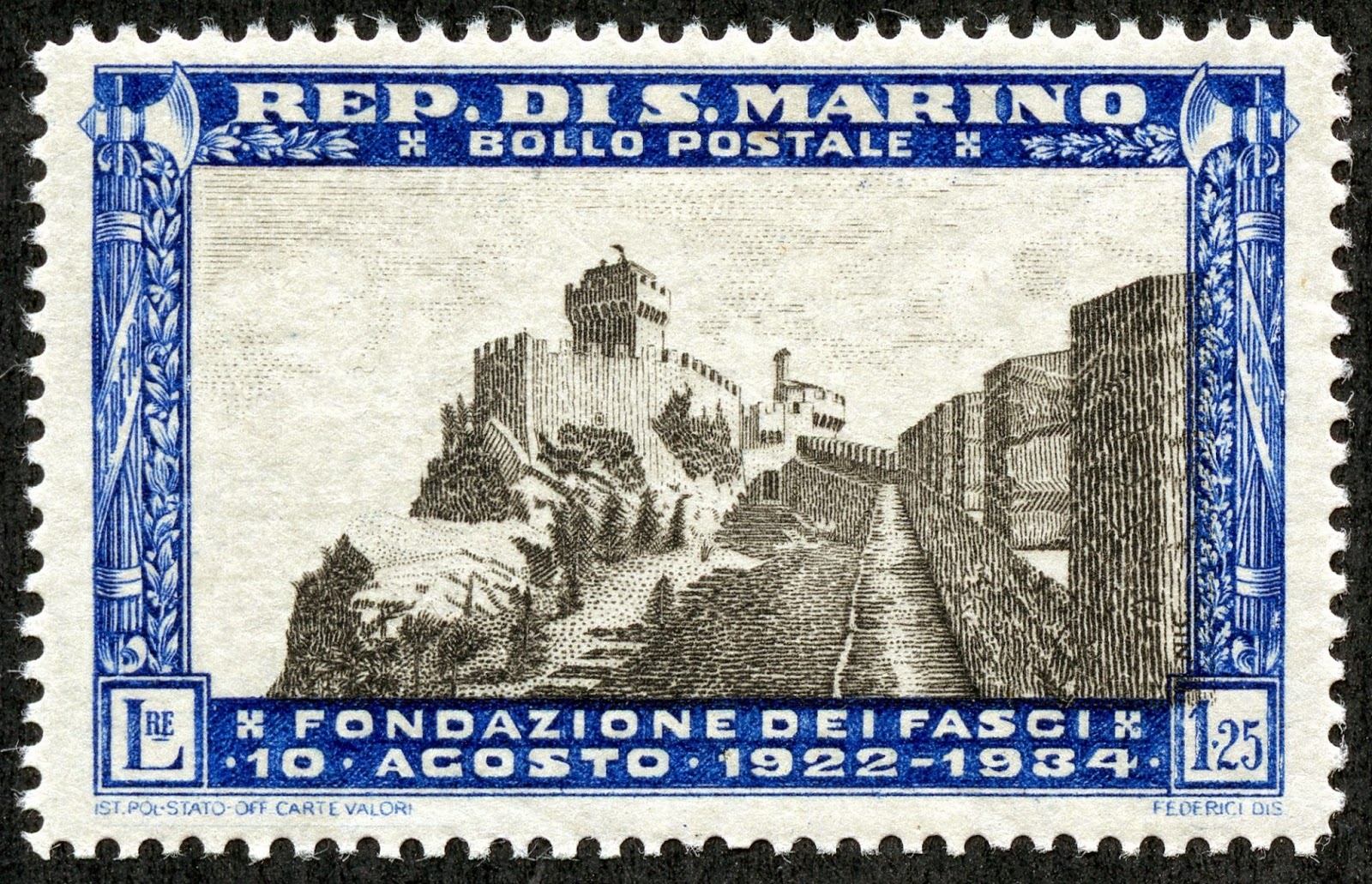 1935 Scott 167 1.25l blue & black
"Ascent to Mt. Titano"
San Marino was ruled by a fascist government between 1923 and 1943, closely allied with Mussolini's fascist regime. For the 12th year anniversary of the founding of the fascist movement, a seven stamp set was released. 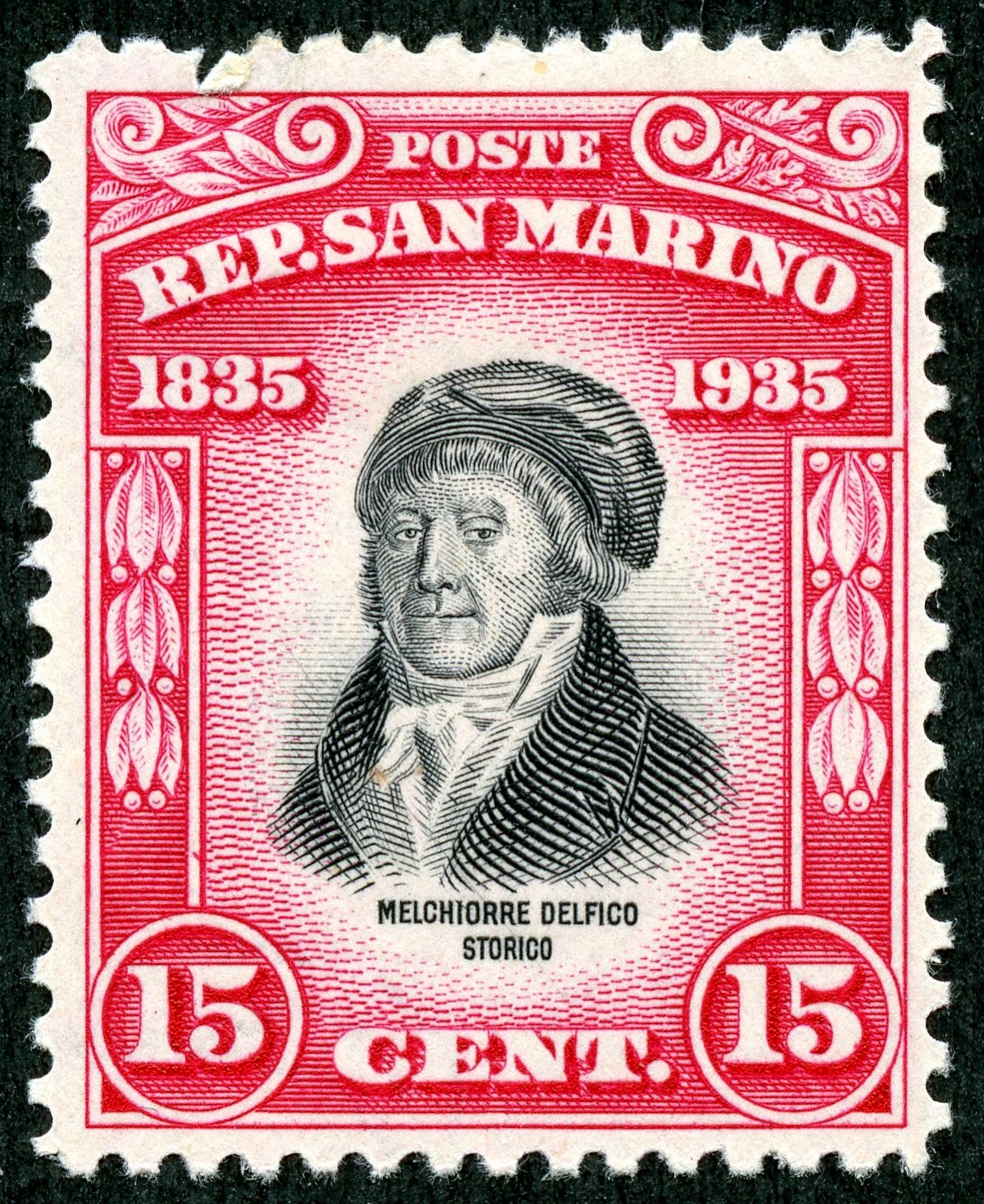 1935 Scott 172 15c rose carmine
"Melchiorre Delfico"
A twelve stamp engraved bi-color issue was released in 1935 in honor of Melchiorre Delfico (1744-1835), Italian economist and historian. His published works corrected many abuses, including the abolition of feudal rights over landed property and their sale.

I'm not sure why San Marino wanted to honor him, though? 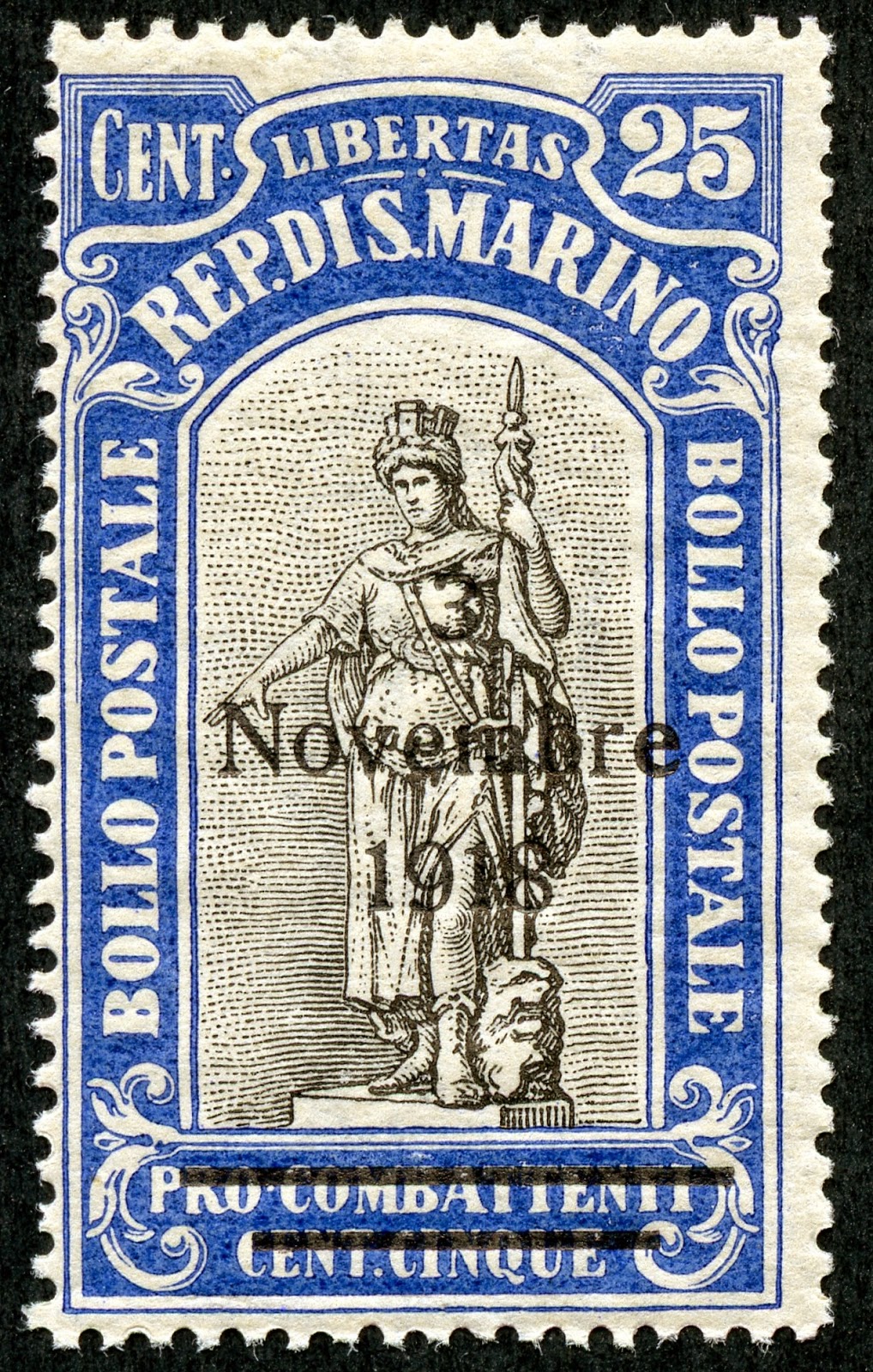 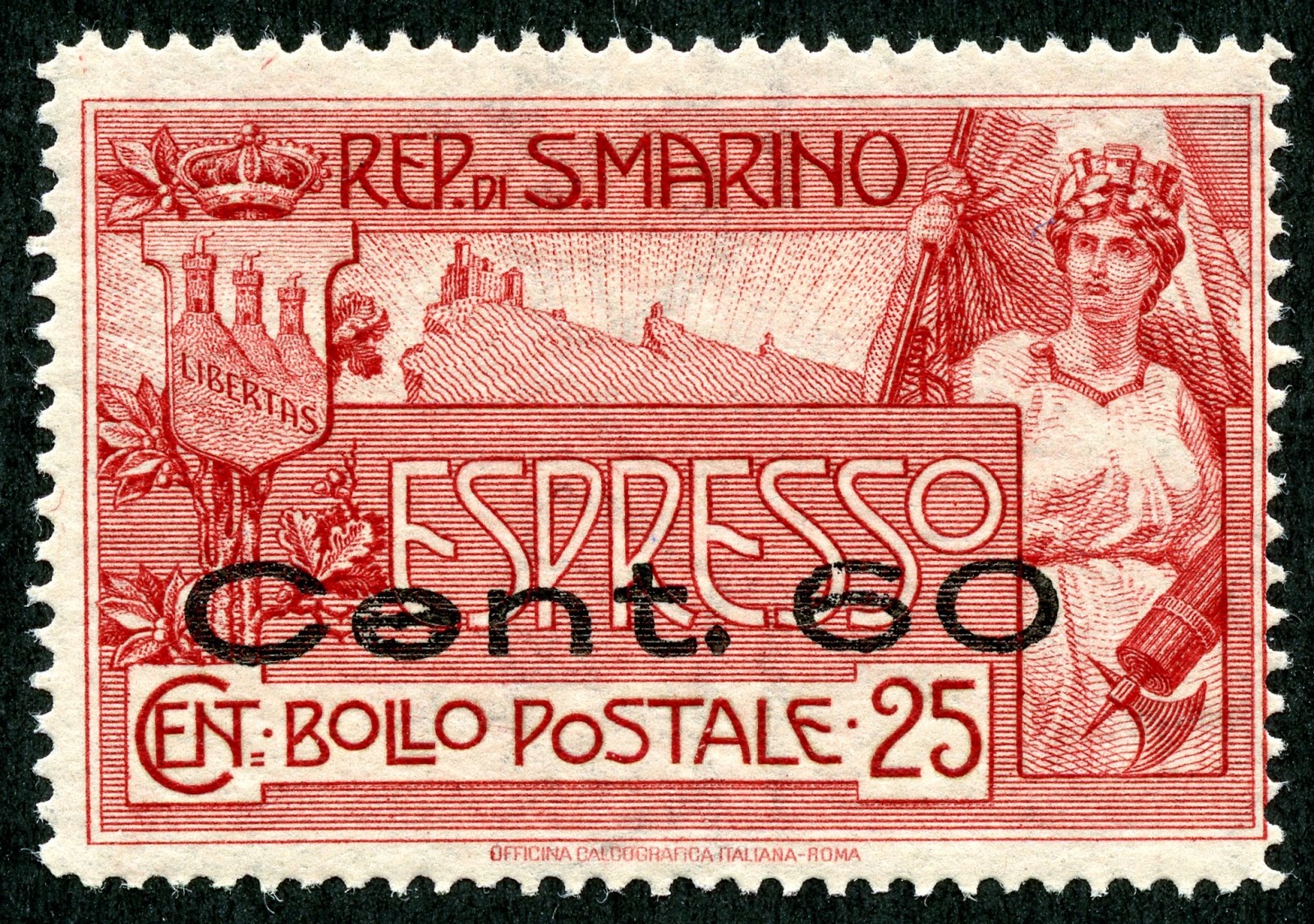 Postage Due Stamps of 1925 Surcharged in Black and Silver
1931 Scott 48 40c on 30c blue & brown;
1931 Scott 40 20c on 5c blue & brown (reverse)
The 1925 postage due issue was subsequently surcharged in black and silver in 1931. The problem, for me, is the surcharge is so heavily applied on many of the stamps, that it is difficult to determine the underlying value. Sometimes, turning the stamp over (reverse) will reveal the underlying value. But I am also left with a number of "unknowns' in my collection. ;-) 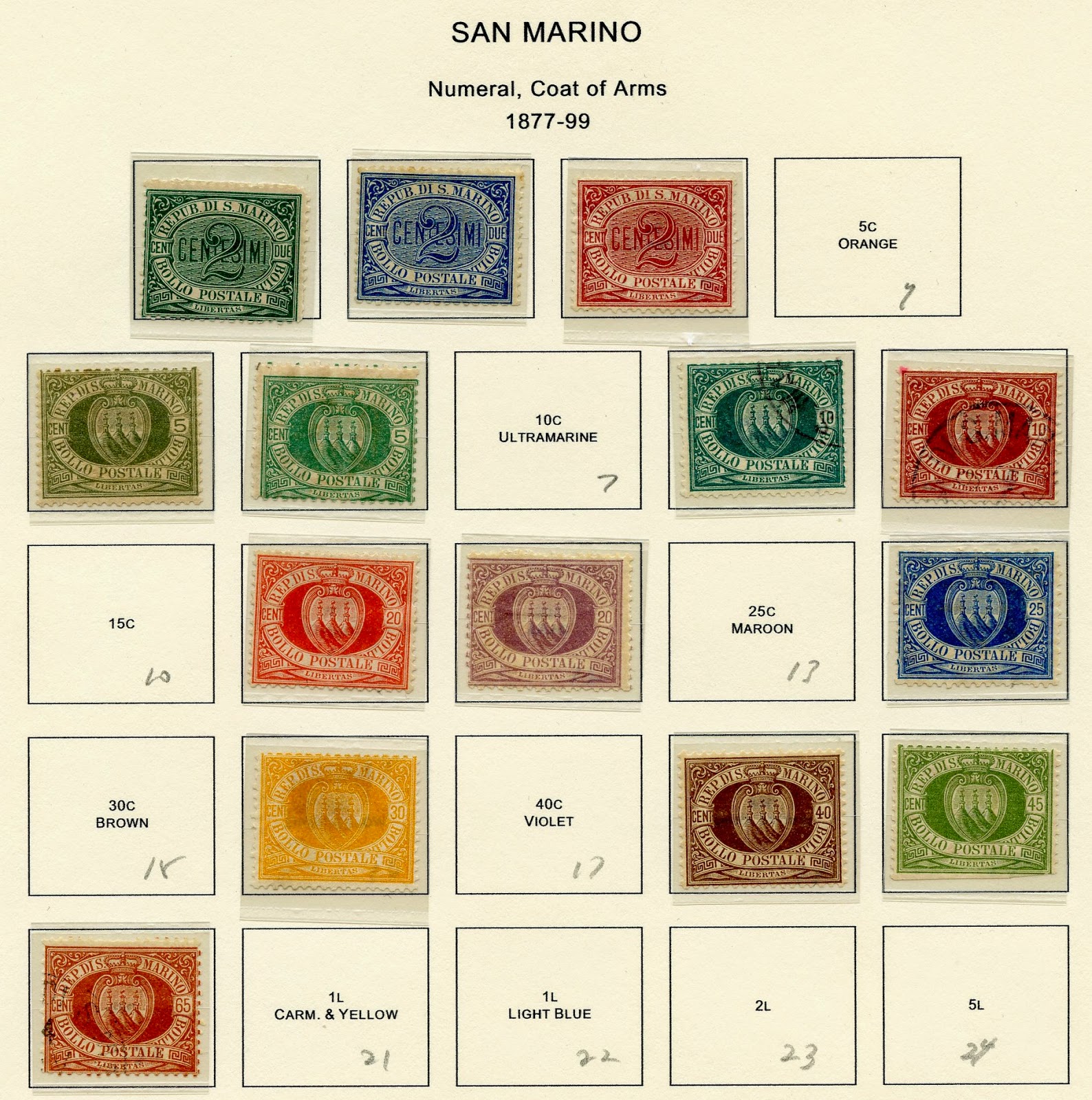 1877-99 Issue in Deep Blue
Deep Blue (Steiner) has 24 pages for the classic era San Marino. All of the major Scott numbers have a space. 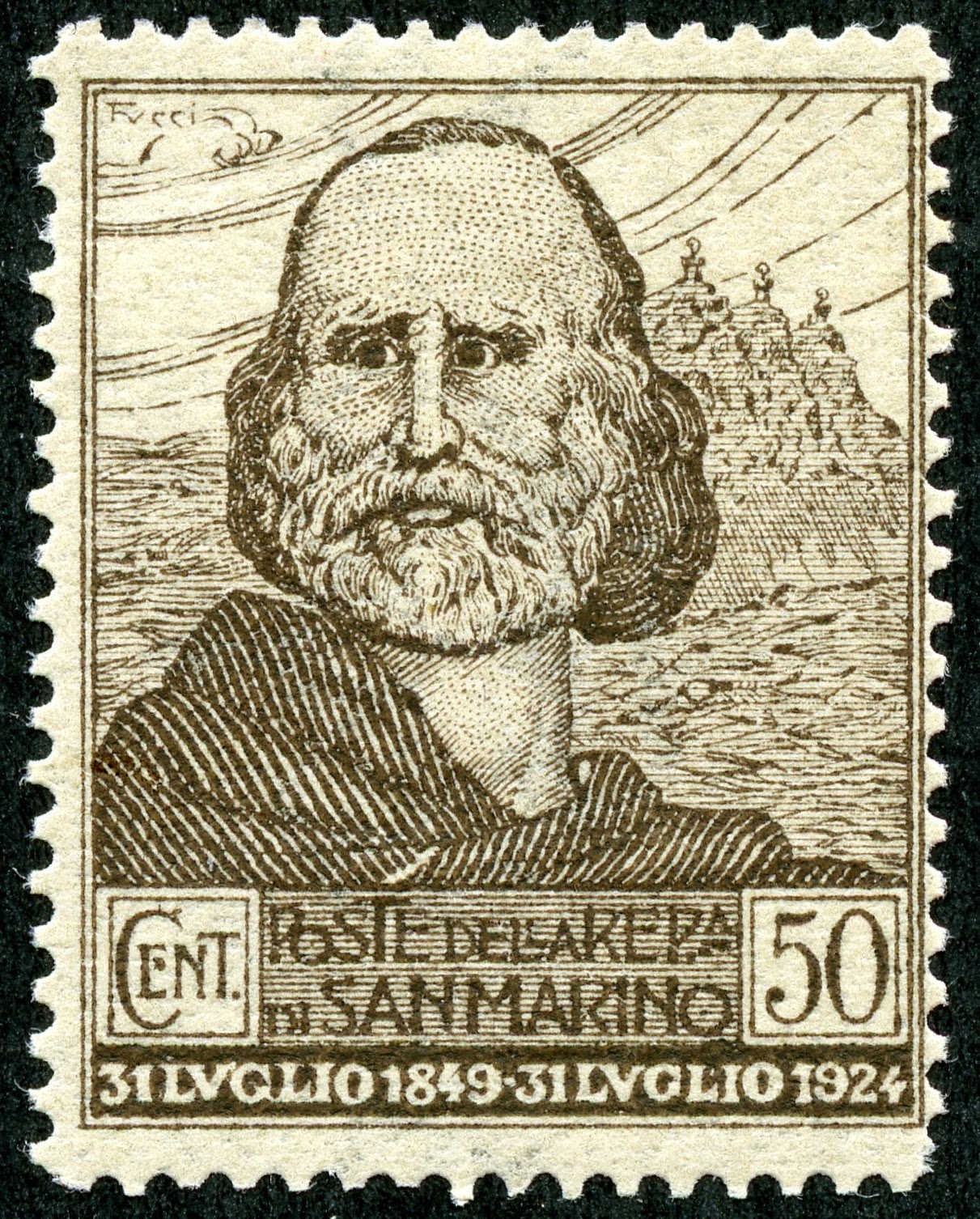 As I mentioned earlier, San Marino stamps can be expensive. And the BB collector is unfortunately not immune. In BB, there are eighteen stamp spaces that are in the "expensive" category ($10+-$30).

And there would have been even more, except for a "trick" I pulled to make the  1877-99 "Numeral" and "Coat of Arms" Issue (eleven spaces) not included. Conventional CV ranges from $11- $19. But they all are also listed in the catalogue as unused "no gum" for under $10. Therefore I am not formally including them in the "expensive" category, although one may still need to pay in that range to obtain a specific stamp.

Hold on to your hats, because there are nine stamps in that range.

A list of all the "most expensive" and "expensive" stamps is provided under the Comments section following the checklist. 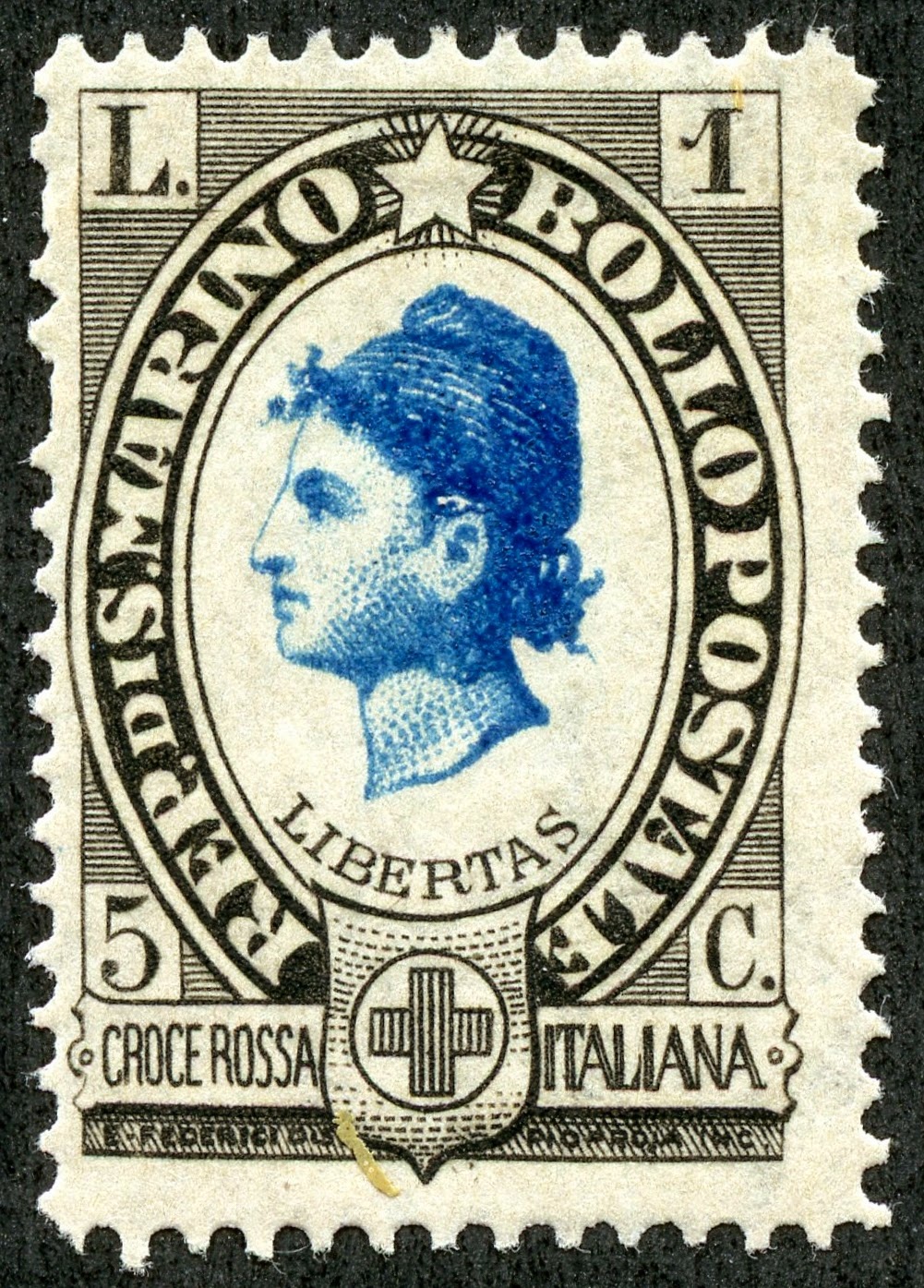 1923 Scott B24 1l + 5c black & blue "Liberty"
Out of the Blue
I've been more interested in obtaining the classical era stamps of San Marino than, perhaps, most other countries. Could it be that child in me that still equates "tiny" and "rare"? ;-)

Note: Maps, "Coat of Arms" image, and border pic of San Marino during WW II appear to be in the public domain.