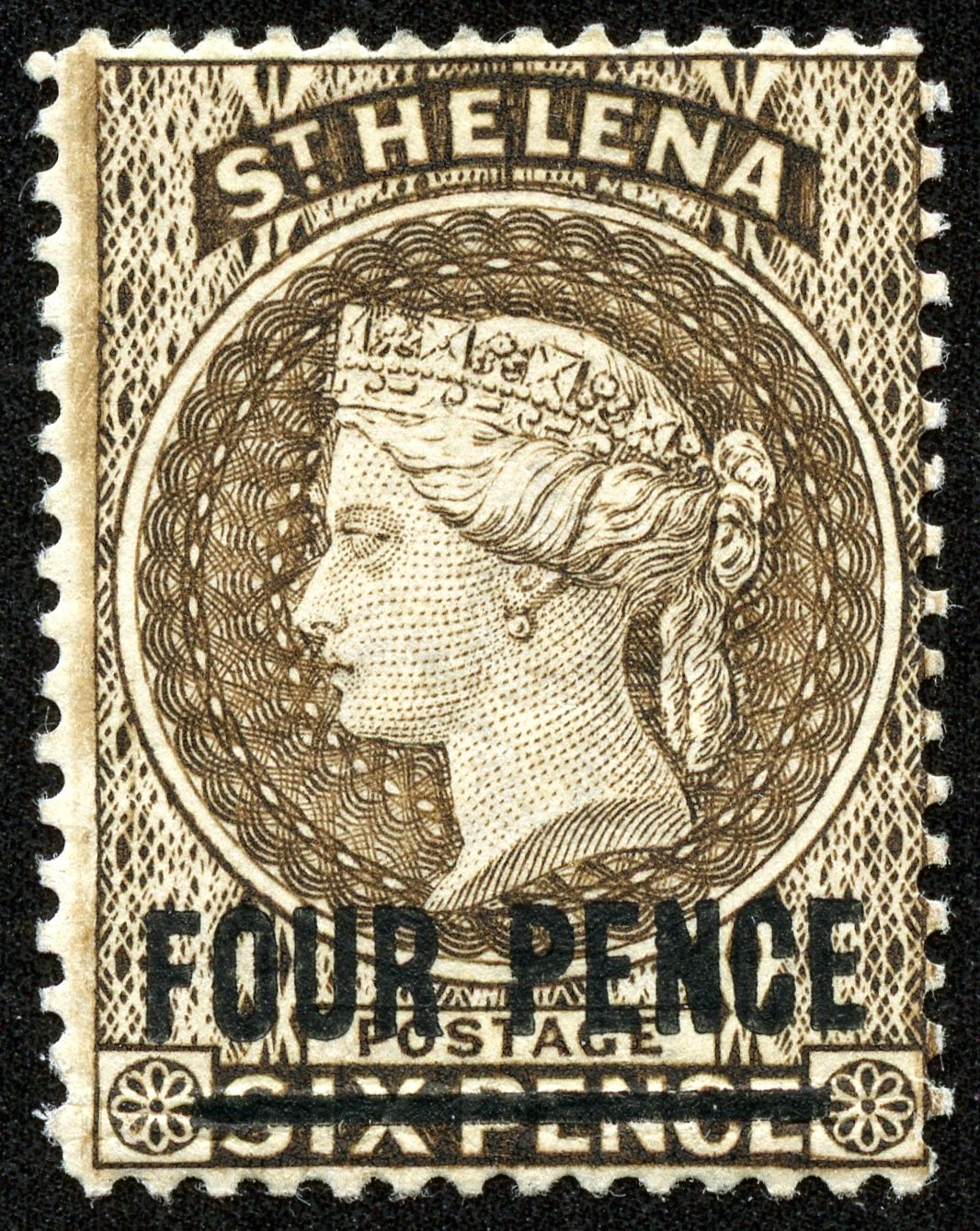 1890 Scott 38 4p on 6p pale brown
Quick History
St Helena (named after Saint Helena of Constantinople by the Portuguese in 1502) is located in the South Atlantic Ocean, and is 1,200 miles (2,000 kilometers) from Angola on the western coast of Africa. If you like remote, this 10 mile by 5 mile size island is for you. ;-)

Even today, the only way to visit the volcanic island is via the ship RMS Saint Helena from Cape Town, South Africa. (A commercial airport strip is in the works for 2016.) 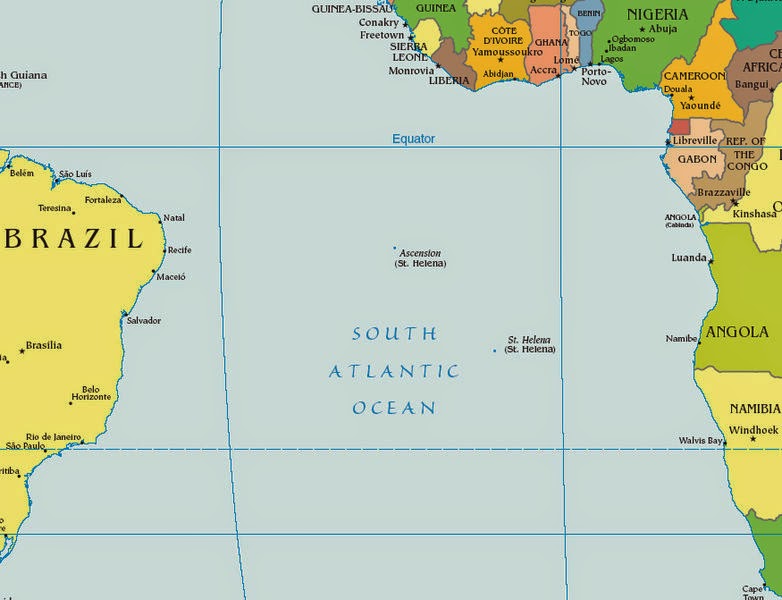 Location of St. Helena and Ascension in the South Atlantic Ocean
Colonization began under charter by the English East India Company in 1659, and the island became an important port of call for ships sailing between Europe and Asia and South America. 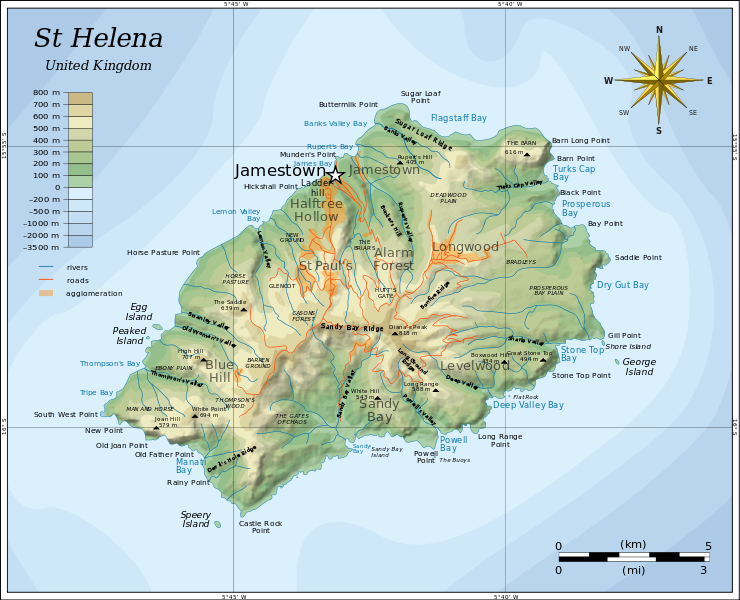 Saint Helena
New Zealand flax, no longer a viable commercial product, now covers the countryside. This is a result of the crop being introduced in 1907 for production of rope and string.

A cup of coffee from St. Helena - promoted approvingly by Napoleon himself- is said to be the most expensive in the world. 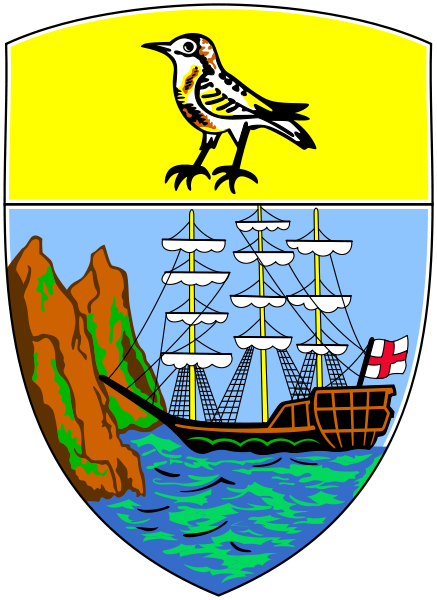 Coat of Arms
The endemic Saint Helena Plover (Wirebird) - shown on the Coat of Arms and the flag- is an important bird species.

Ascension Island was made a dependency in 1921, and Tristan da Cunha was added in 1938.

Now, the islands are part of the British Overseas Territories.

And stamps? Ascension Island, Tristan da Cunha, and Saint Helena all produce their own today- which is said to be a significant portion of their income. 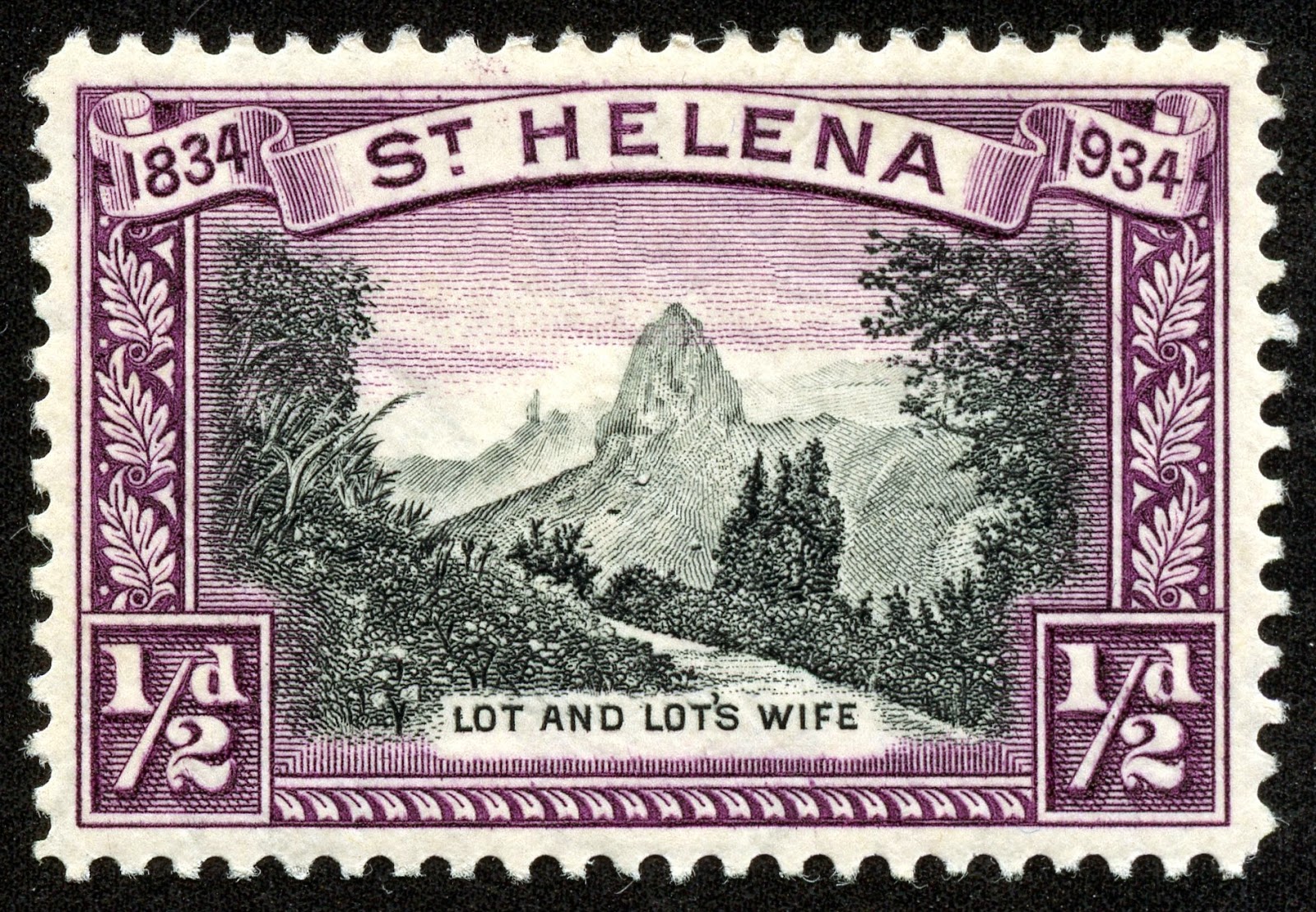 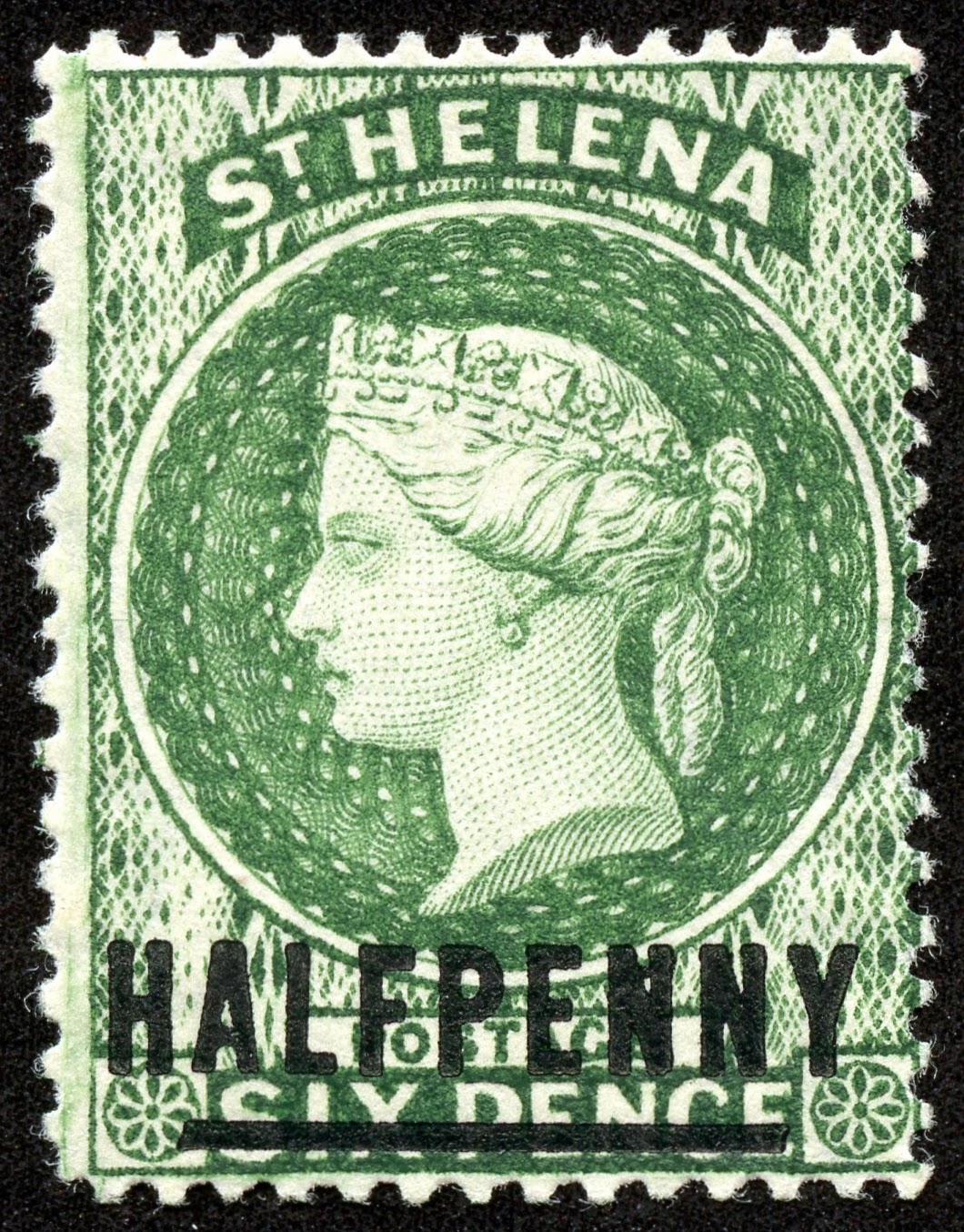 Between 1856 and 1889, the six pence denomination was issued under seven Scott catalogue numbers that differ by color, watermark and imperf/various perfs.

Suffice it to say it is all rather interesting, but one must pay attention to detail. I leave it to you to sort this out using the Scott catalogue information.

Also, many of the stamps are rather expensive. But I found six stamps (CV $3+-$9) that are in the range of a WW classical collector with a modest budget. 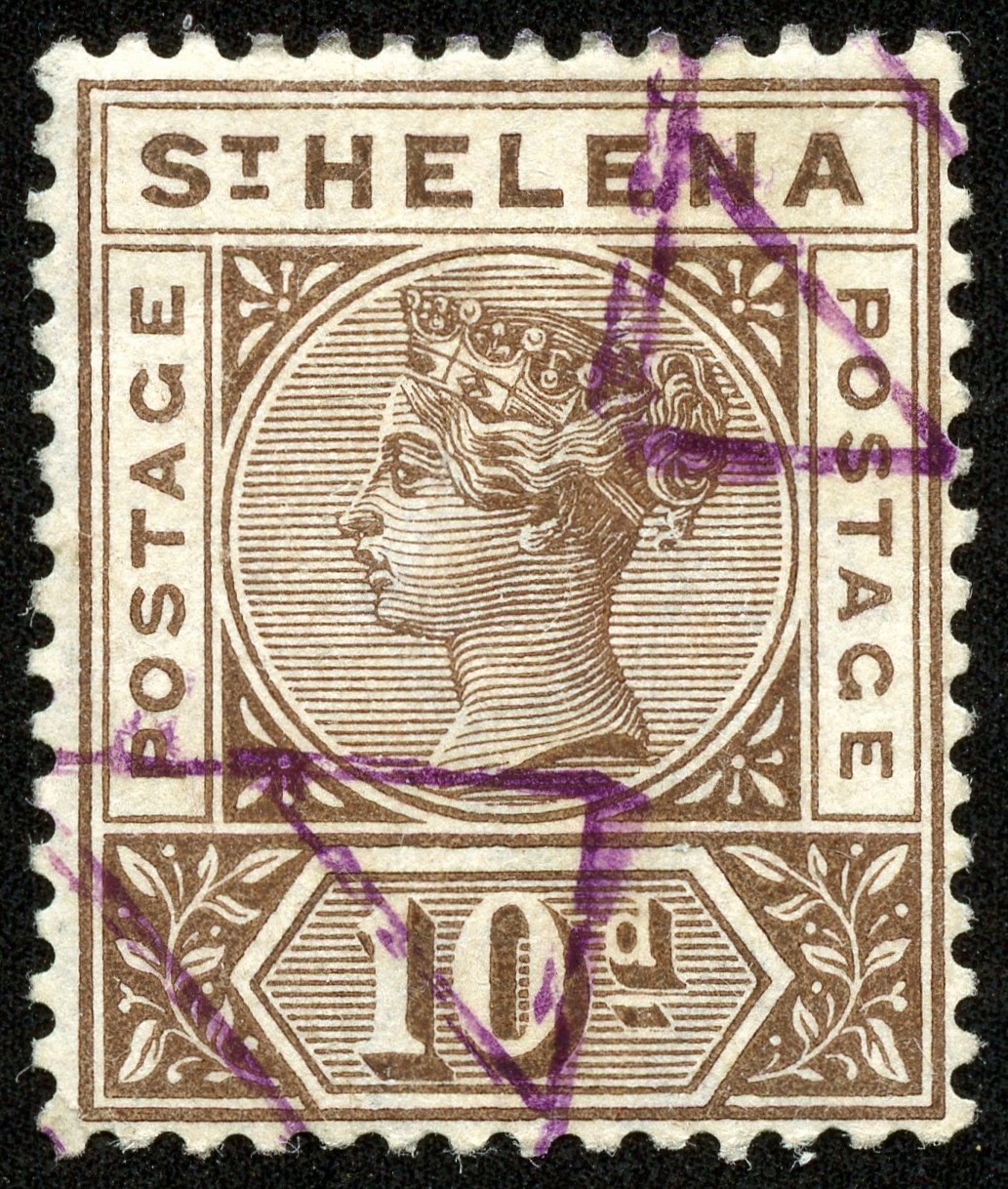 I chose this stamp to illustrate the "remainder" cancellation.

"In 1905, remainders of Nos 34-47 were sold by postal officials. They were cancelled with bars, arranged in the shape of diamonds, in purple ink." 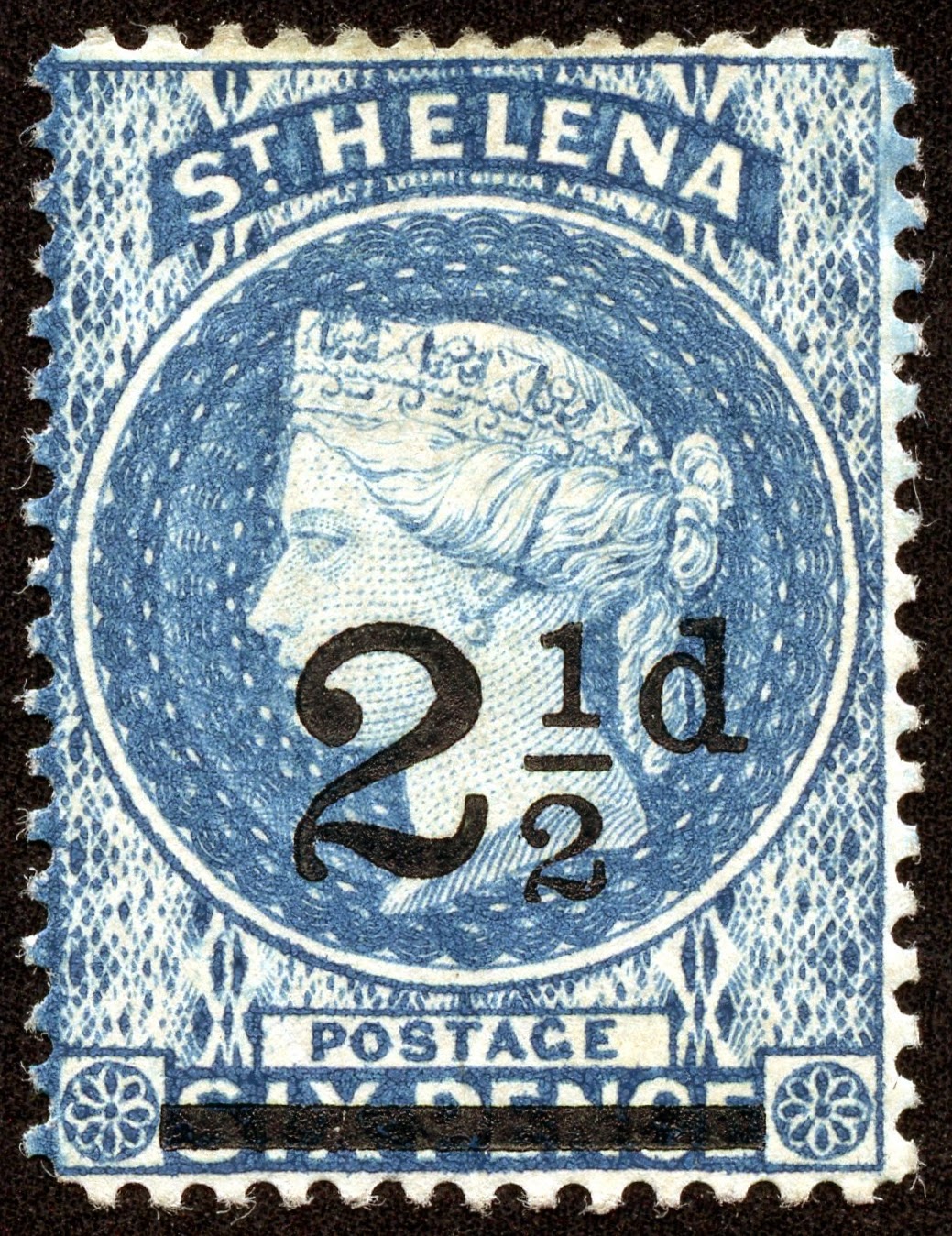 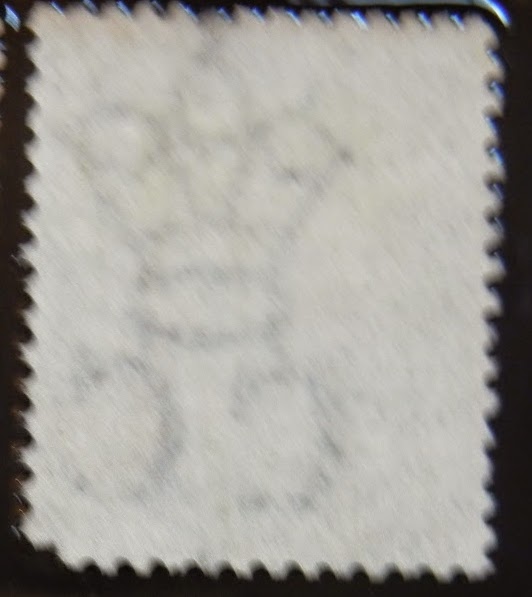 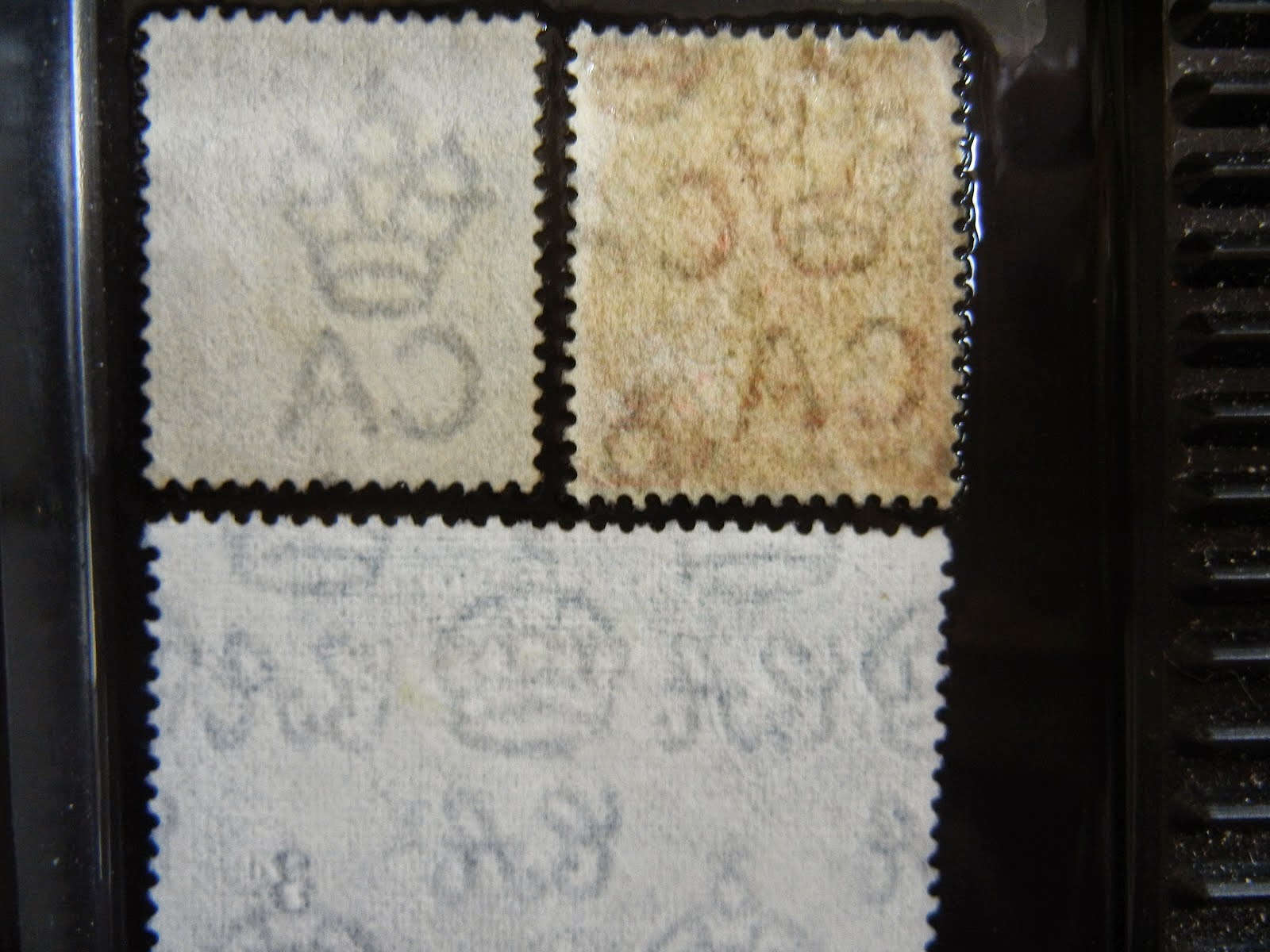 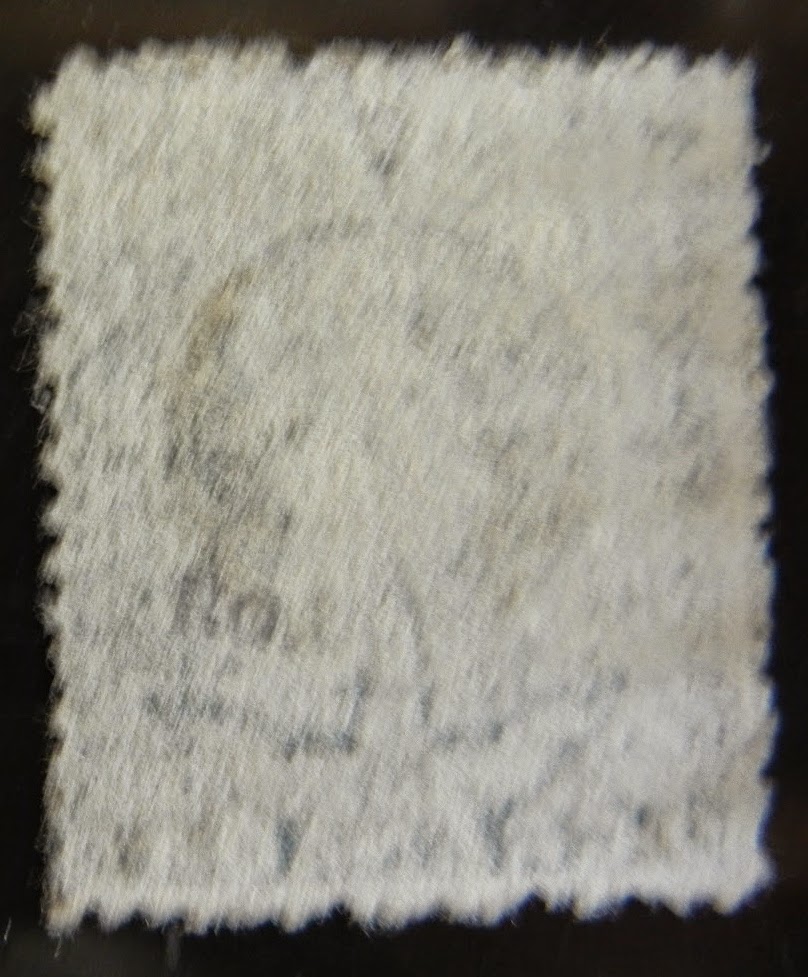 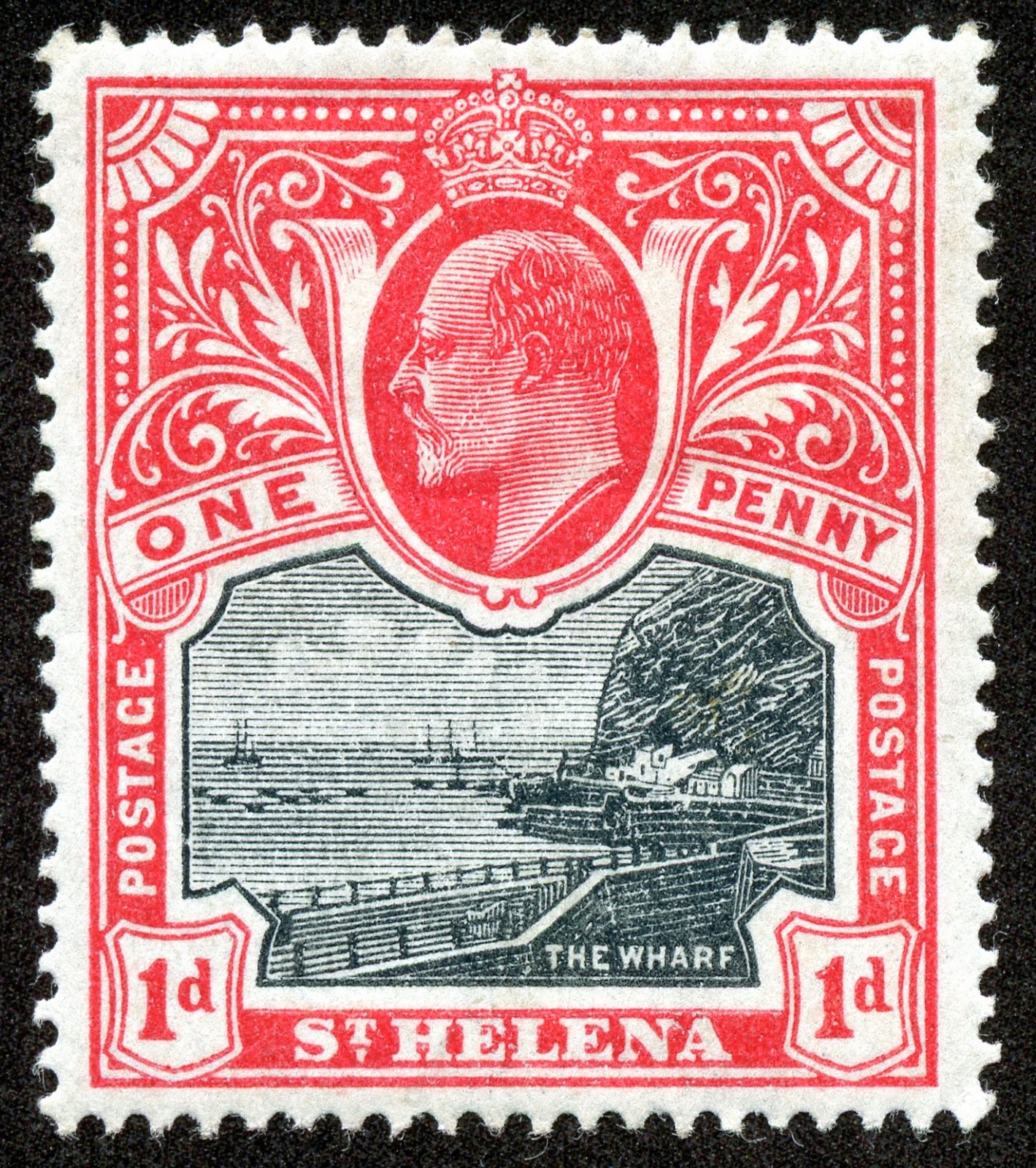 1903 Scott 51 1p carmine & black "The Wharf"
In 1903, a rather nice large format bi-color six stamp issue with wmk 1 was produced. The stamps had a small upper central vignette of King Edward VII, and either "The Wharf" or "Government House" pictorial. 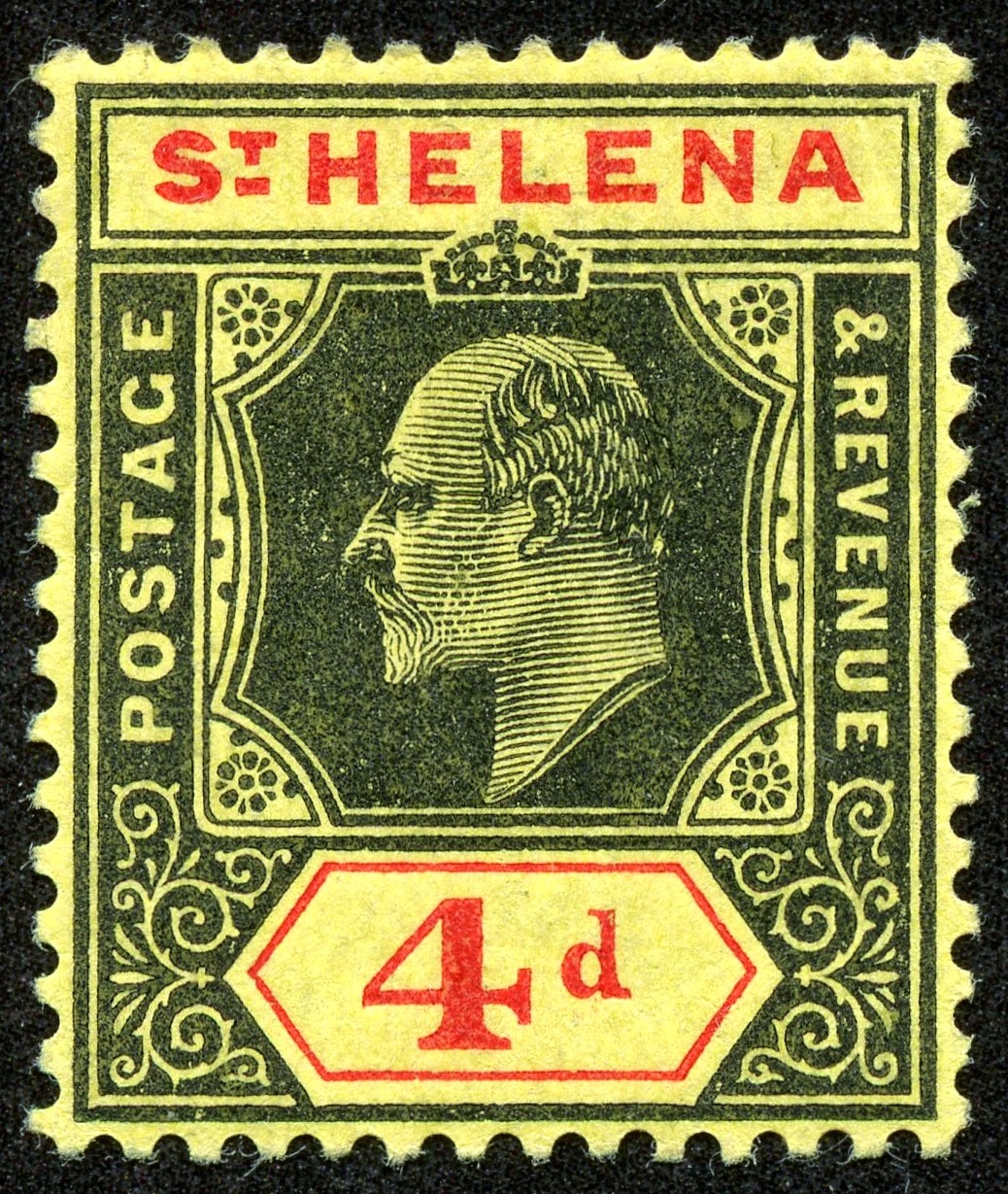 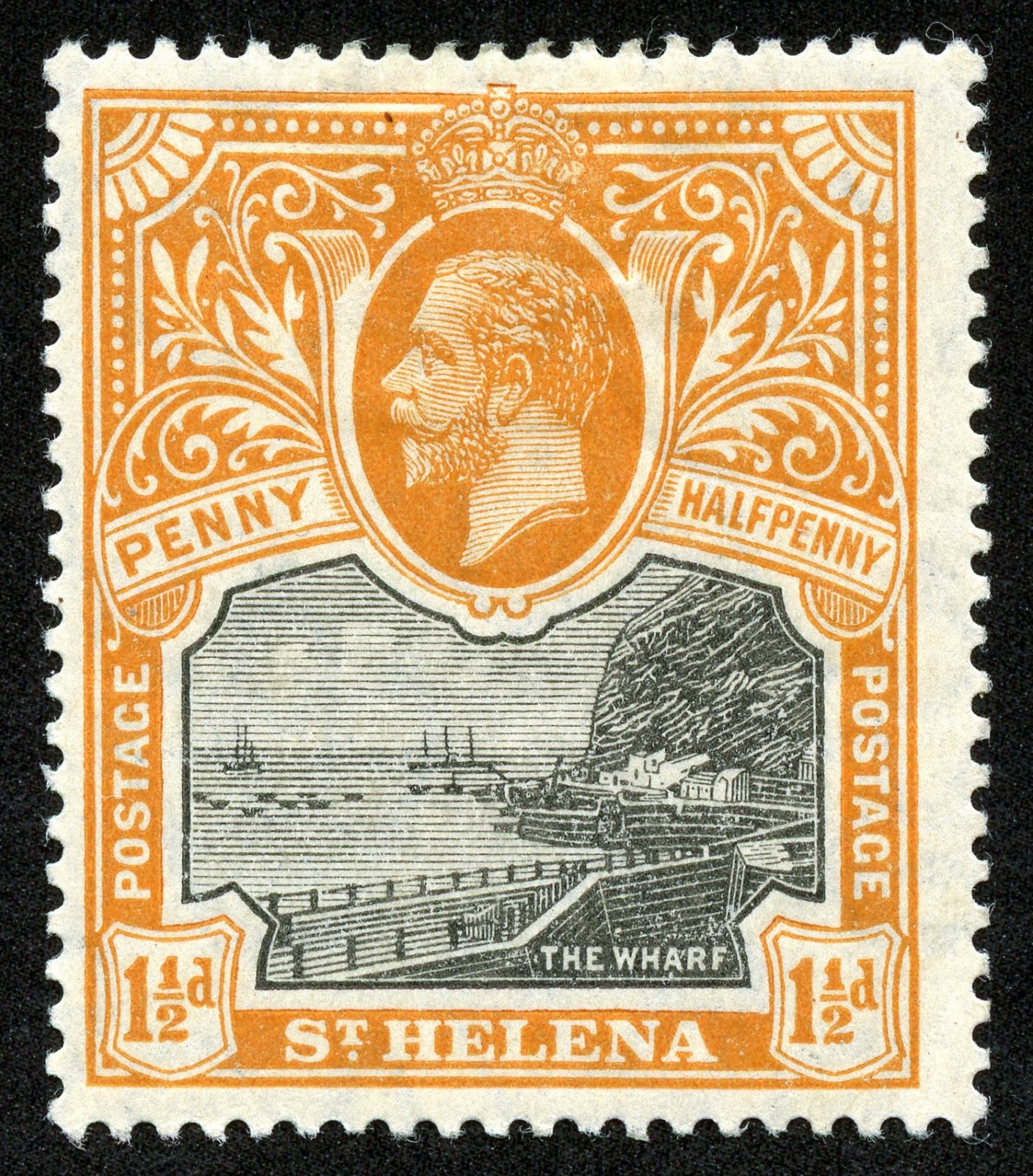 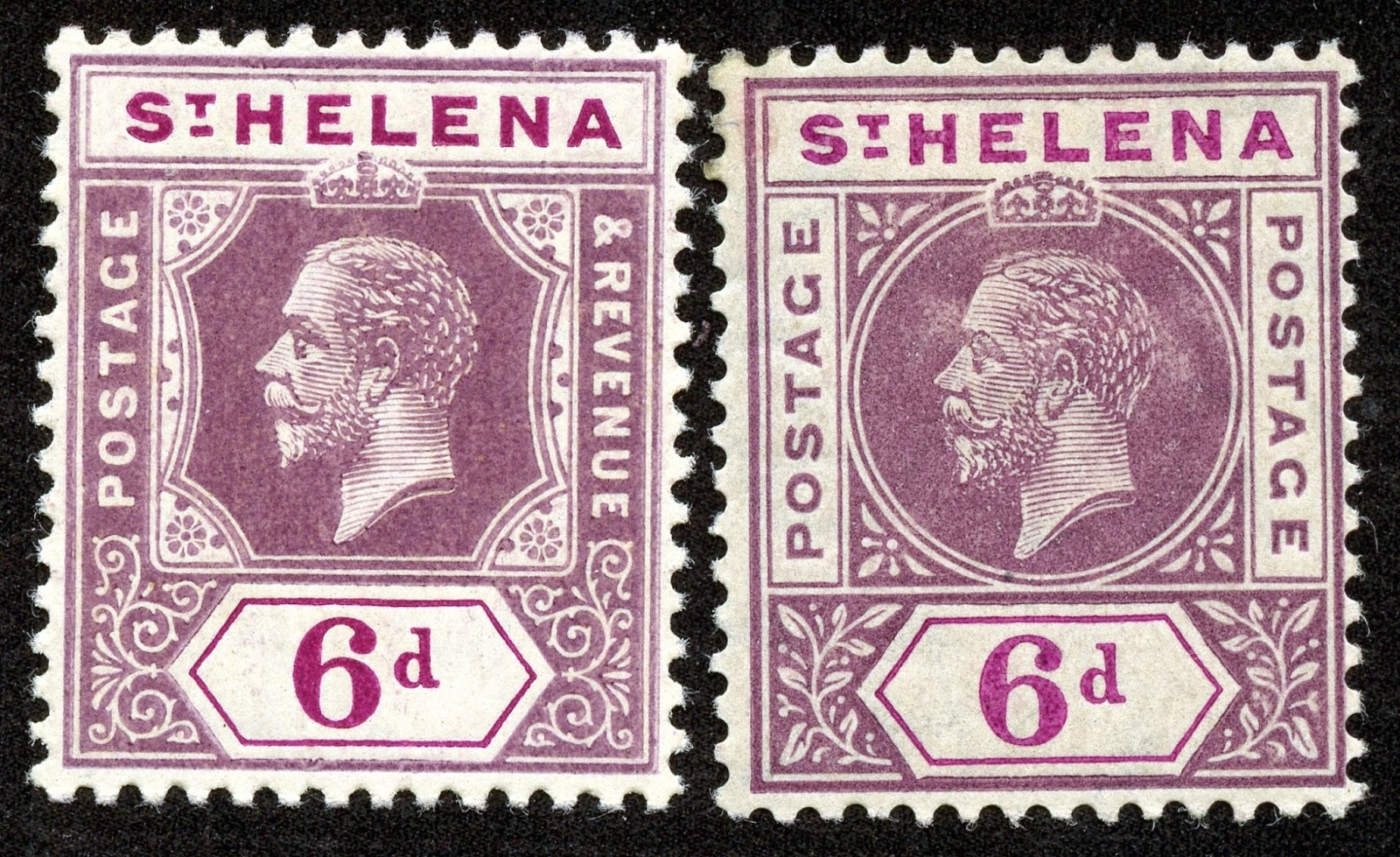 And as one can clearly see, the issues differed in frame design. 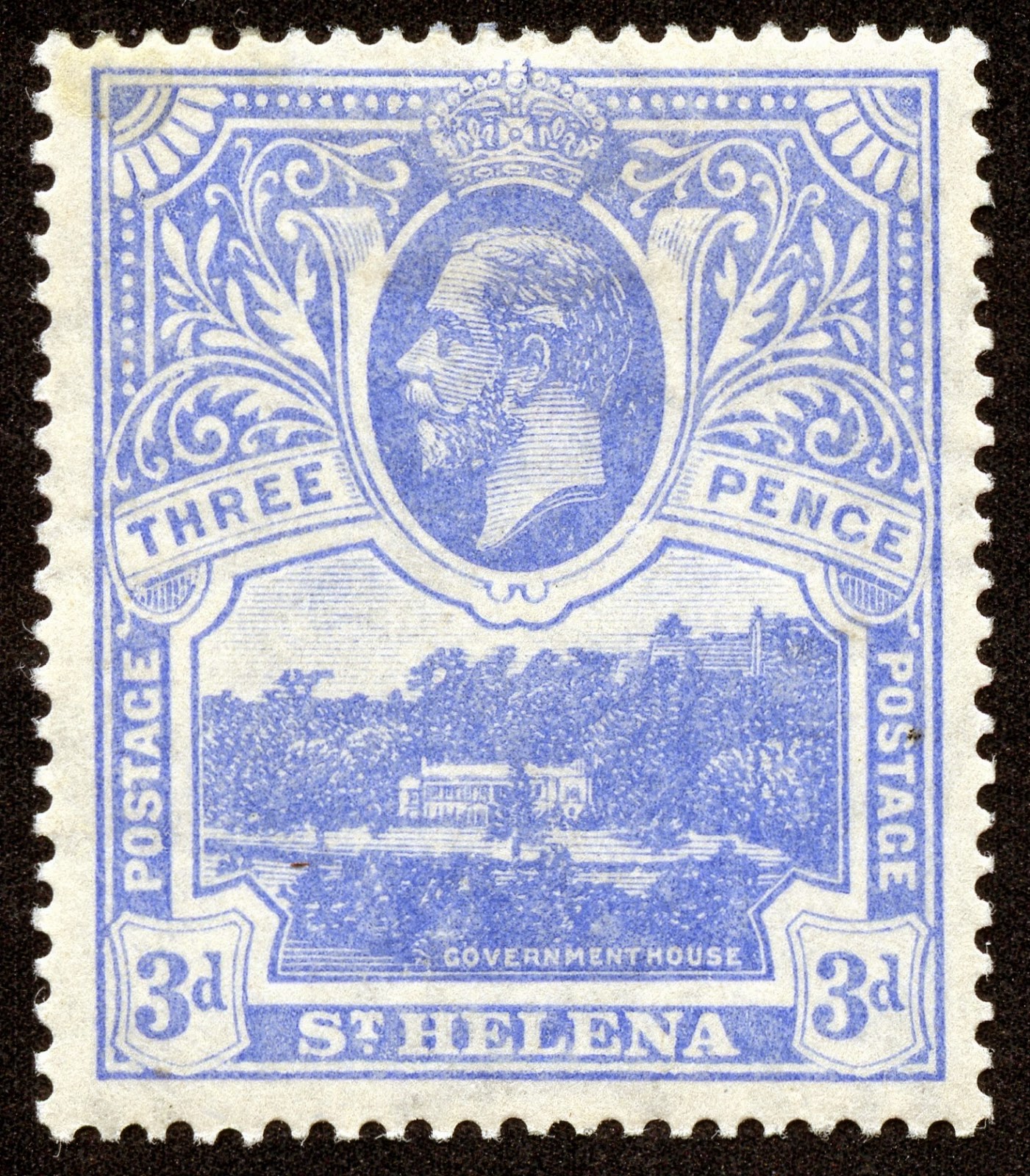 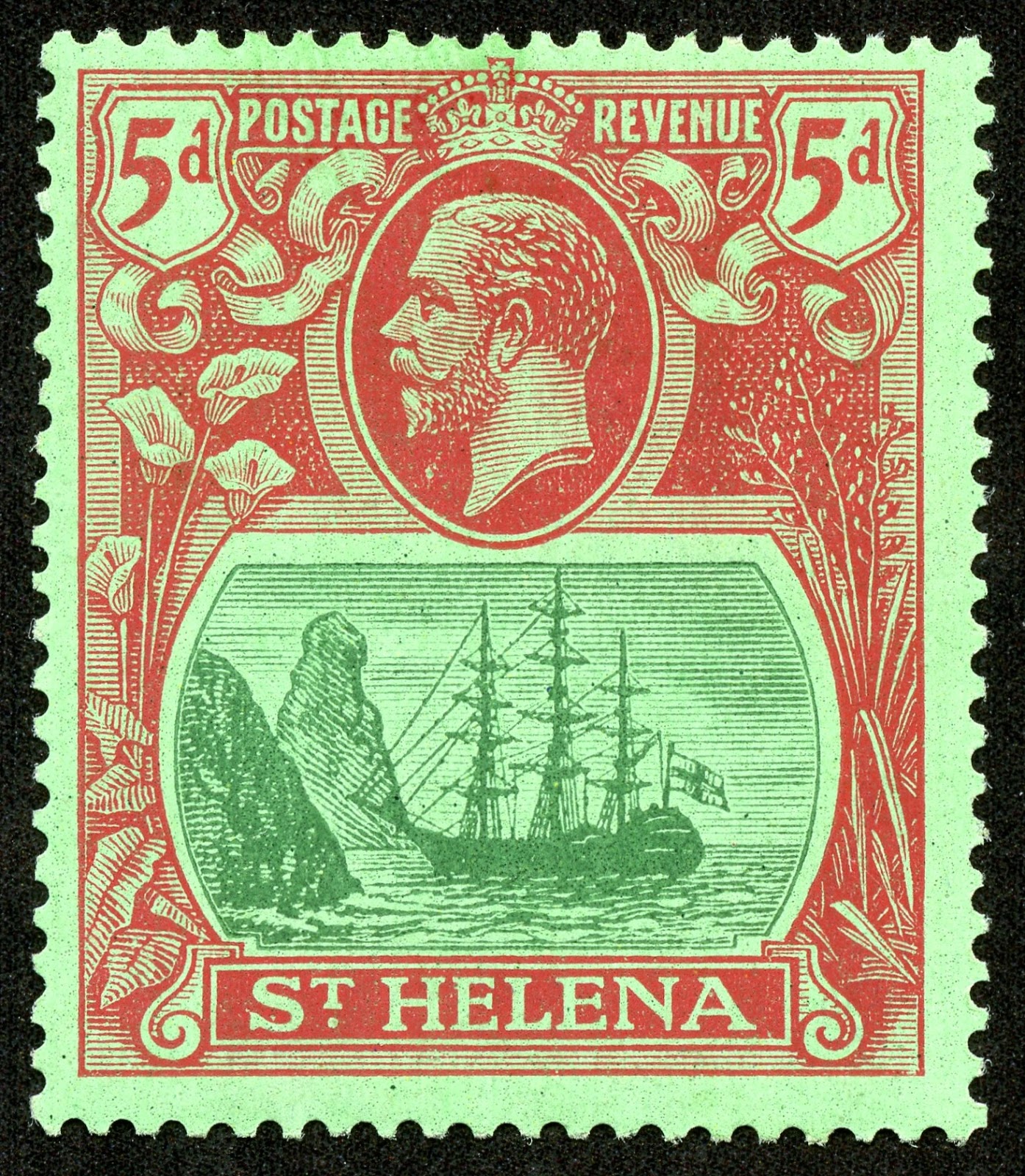 The scene shows a three-masted sailing ship and the mountainous St. Helena. The Flag of England ( St. George's Cross) is flying from the ship. 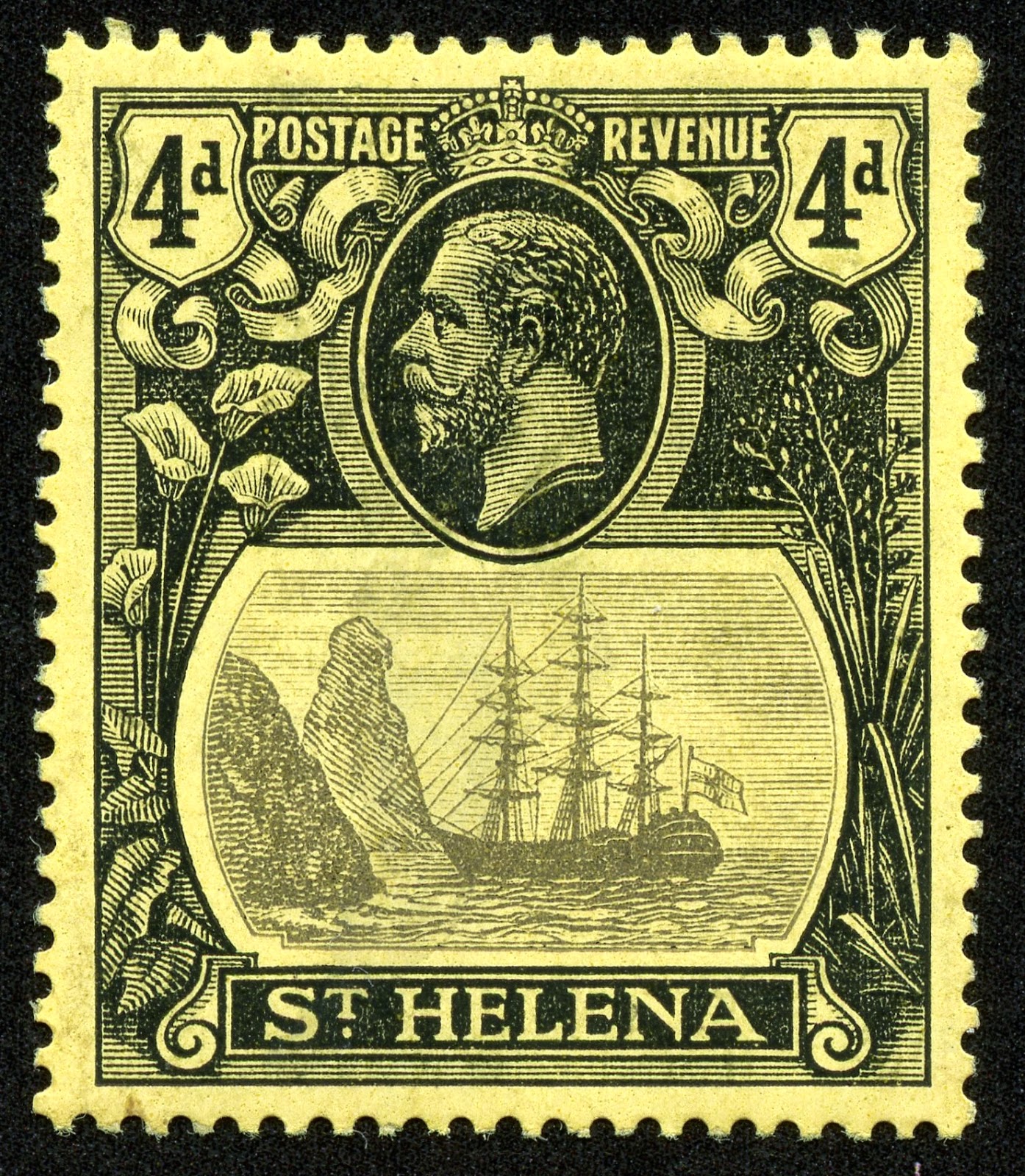 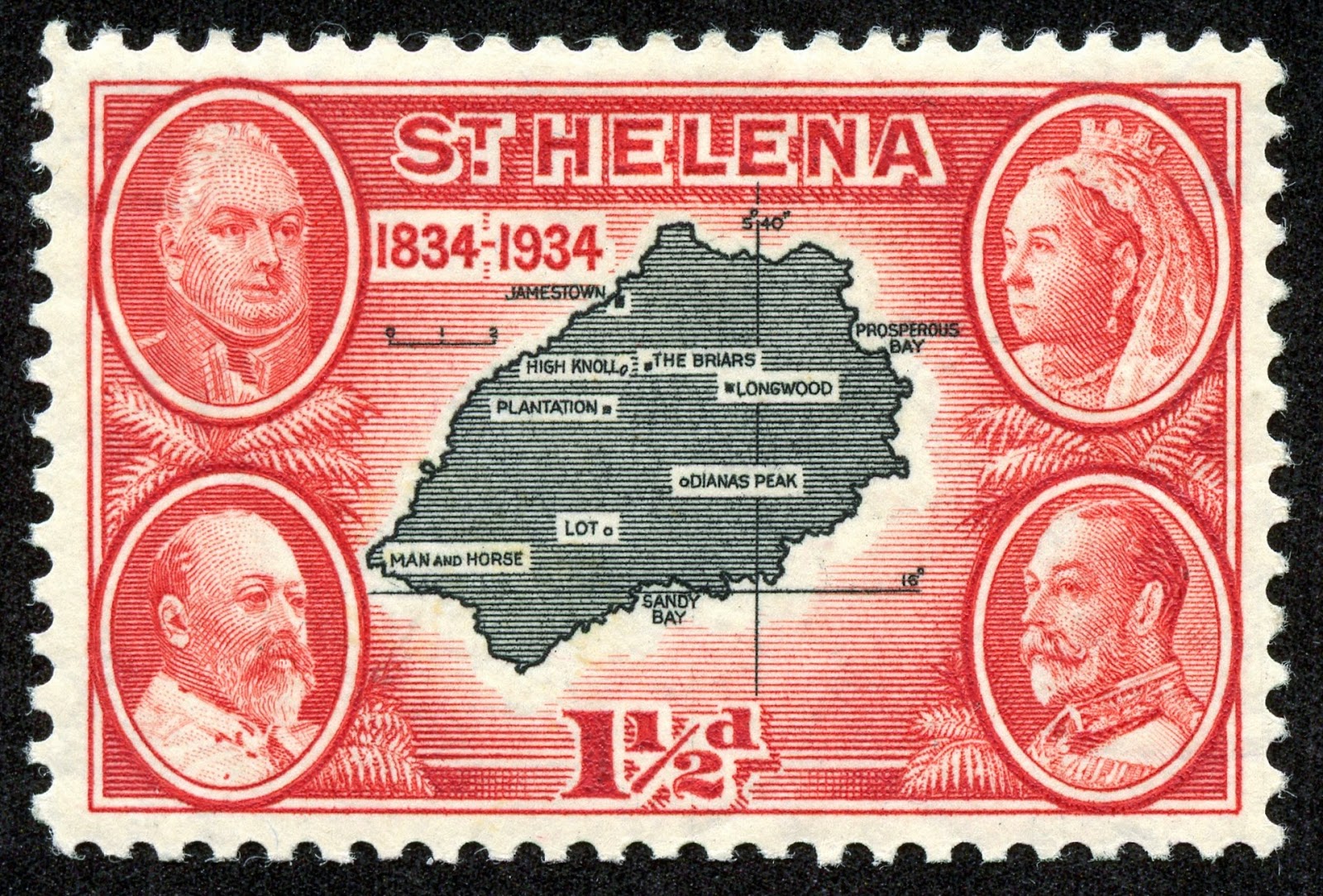 1934 Scott 103 1 1/2p red & black "Map of the Colony"
The centenary engraved bi-color pictorial ten stamp issue of 1934  is lovely indeed, and the highlight (for me) of the St. Helena classical stamp era.

There are ten pictorial scenes, and some of the stamps also depict Queen Victoria and Kings William IV, Edward VII, and George VI. I show three more of the designs/scenes from this issue heading the subsections of this post. CV is <$1-$8 for seven stamps. 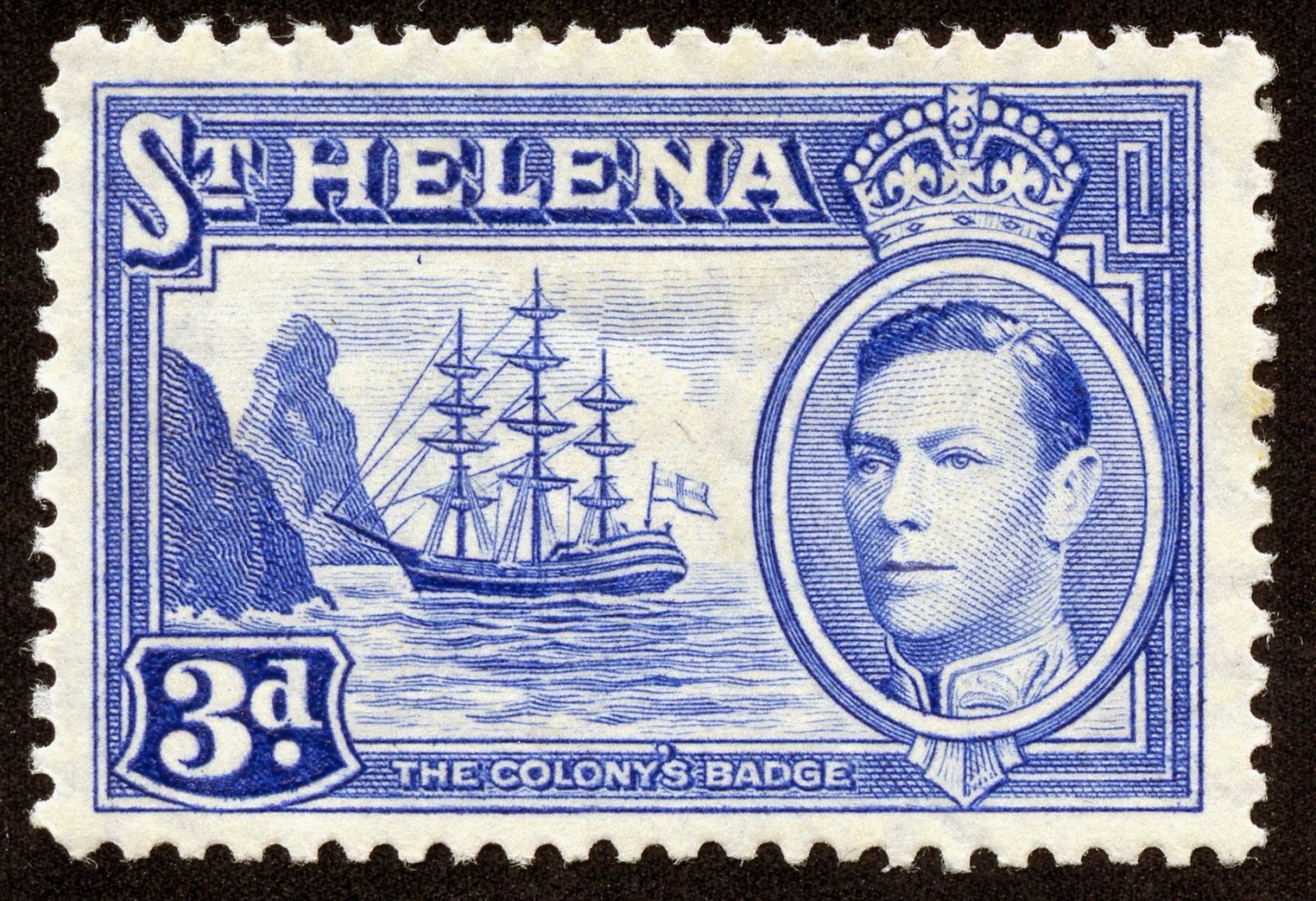 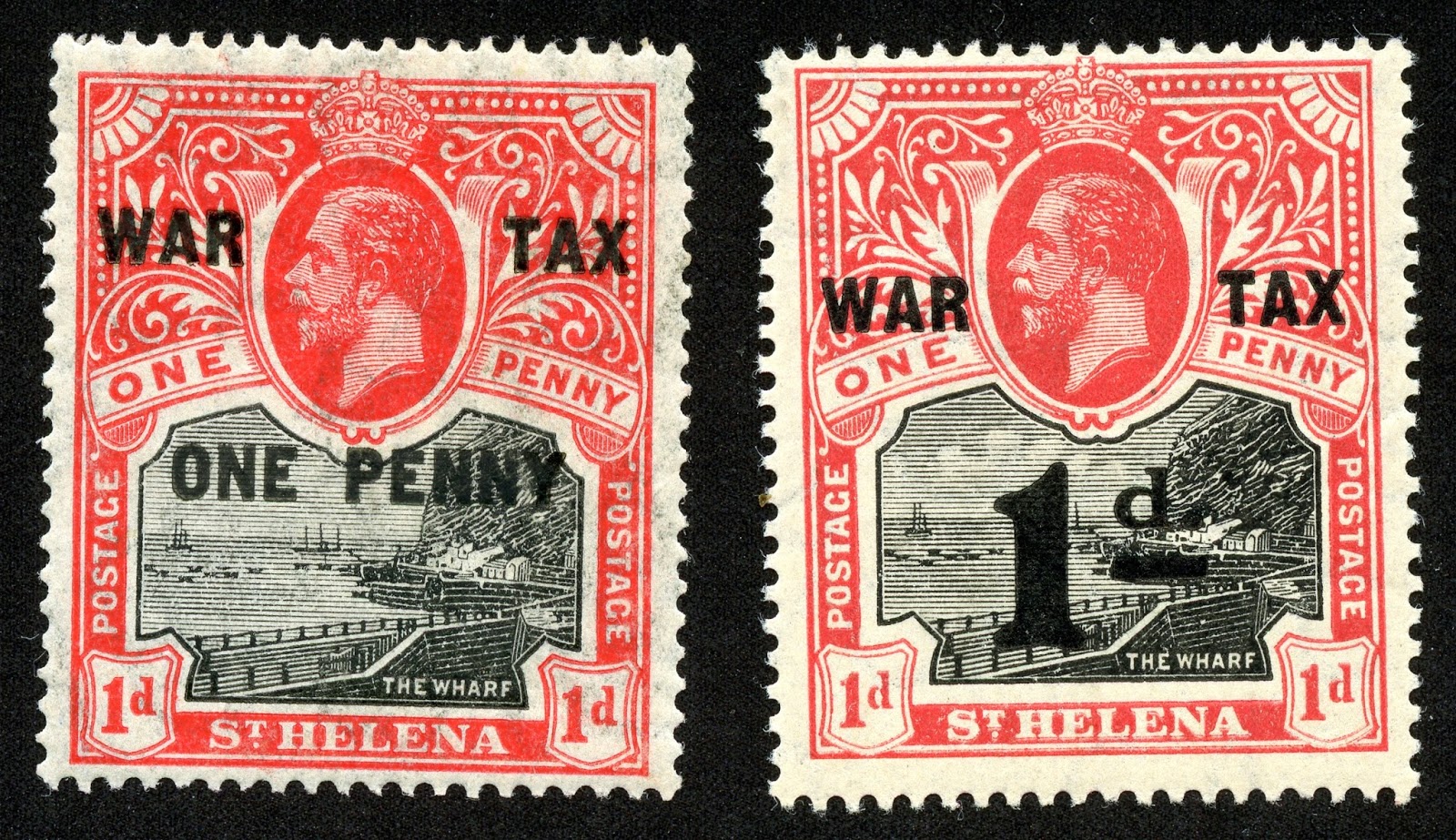 Some collectors may not be aware that the United States also had a "war tax" during WWI. The usual rate for posting an ordinary letter was raised from 2c to 3c, and then reduced again to 2c after the war, ;-) 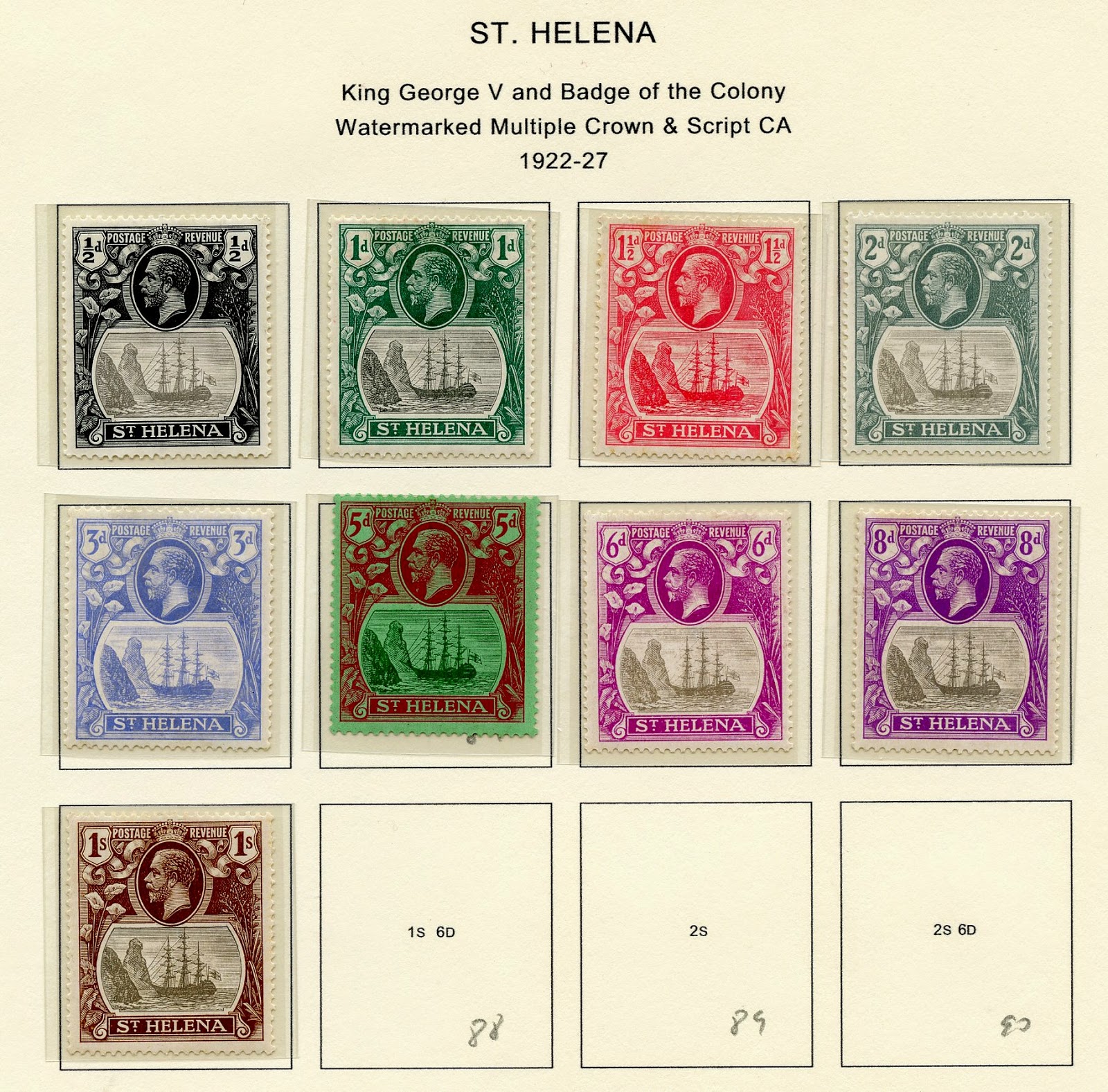 1922-27 Wmk 4 Issue in Deep Blue
In Deep Blue (Steiner), St. Helena has 13 pages, and has a space for all the Scott major numbers. Because of expense of the earlier issues, I don't have stamps in my album until the third page. 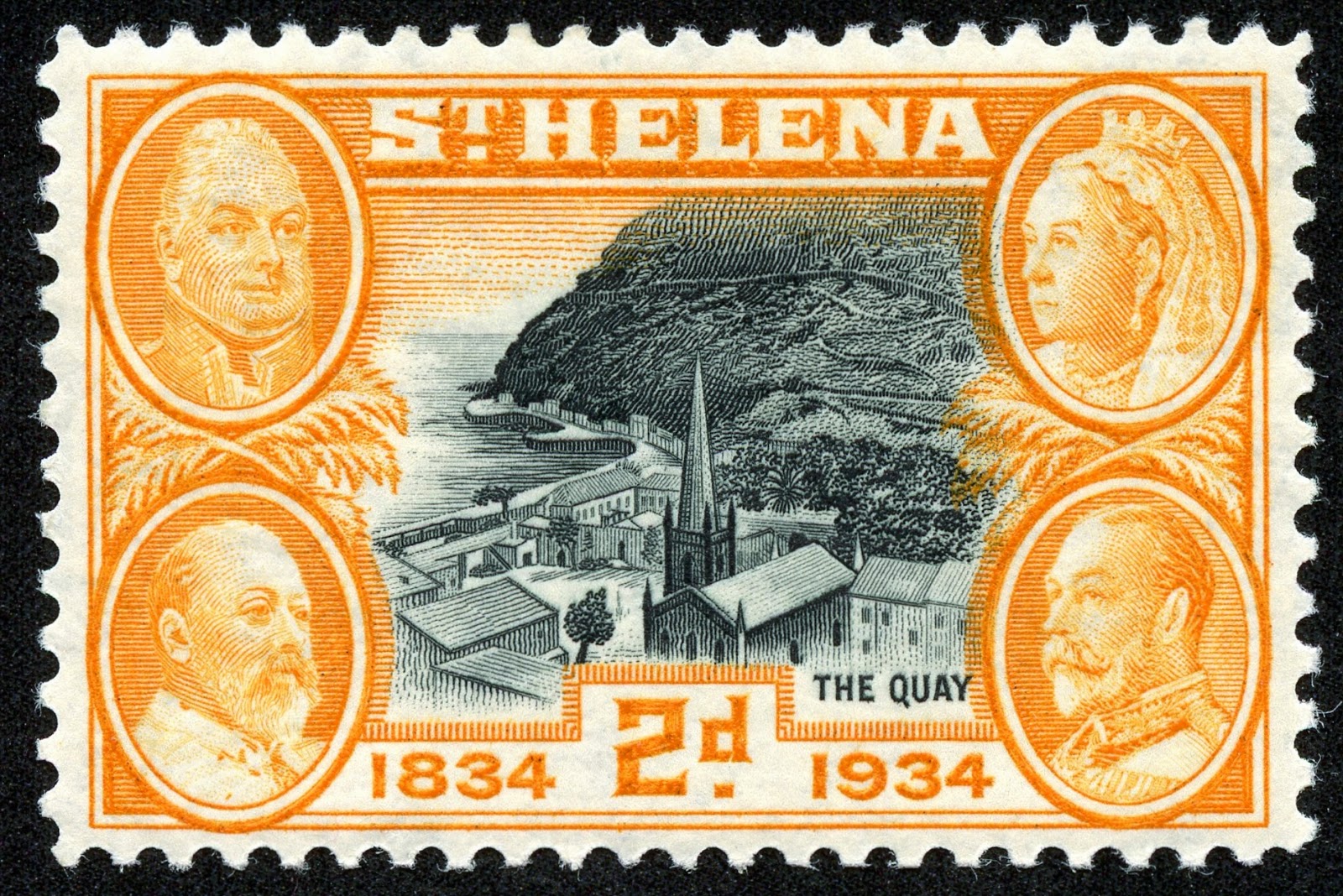 Although there can be expensive stamps for St. Helena, BB has a good inexpensive selection, as none reach the "Most Expensive" threshold ($35), and only three have a CV of $10+-$20+. 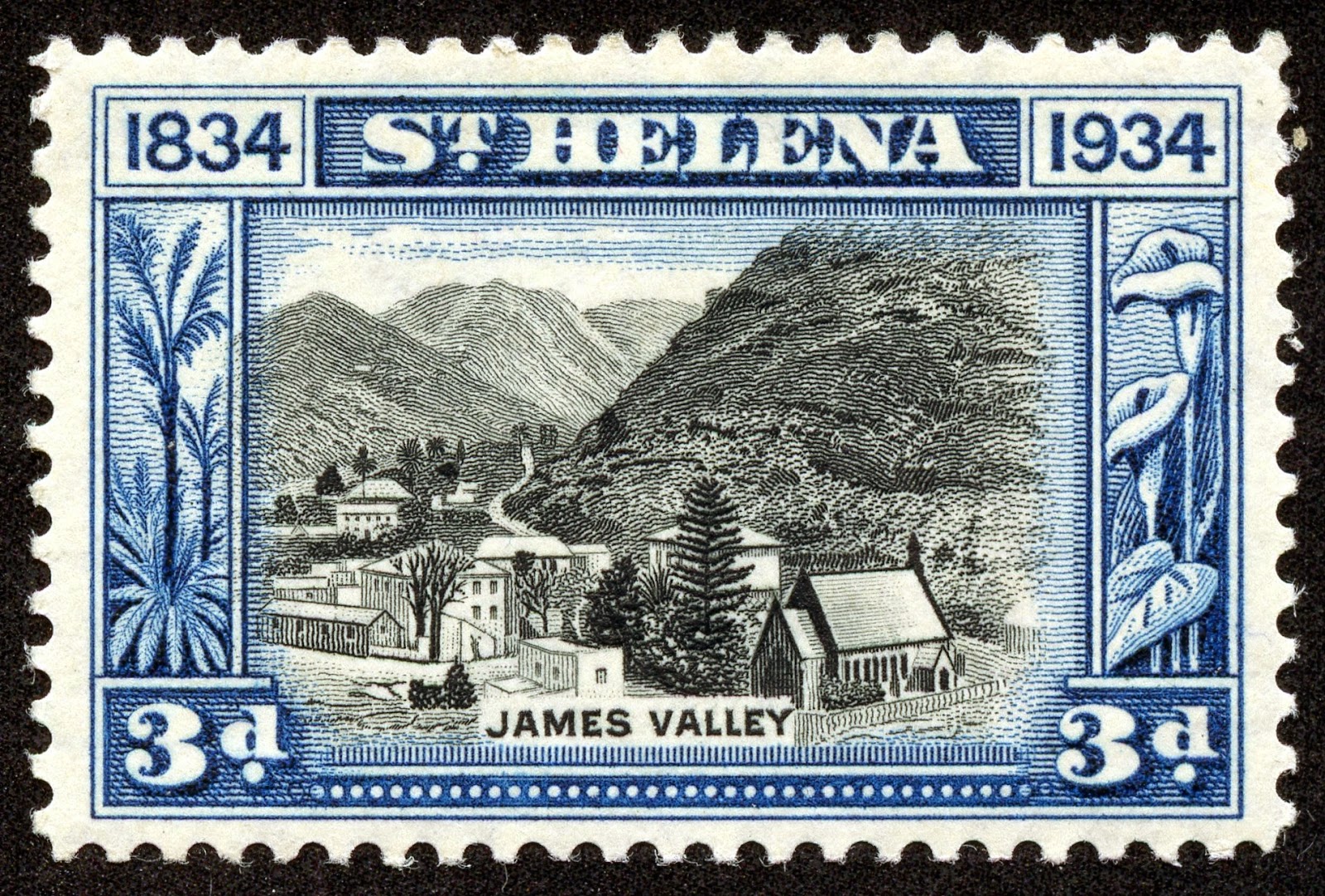 1934 Scott 105 3p blue & black "View of James Valley"
Out of the Blue
I like the stamps of St. Helena, and would like to acquire more. But the downside, for a WW classical collector such as myself, is the expense! So I will probably be looking elsewhere. ;-)

Note: Longwood House and Coat of Arms image, and maps appear to be in the public domain. Attribution to Oona Raisanen (Mysid) for the St. Helena map. 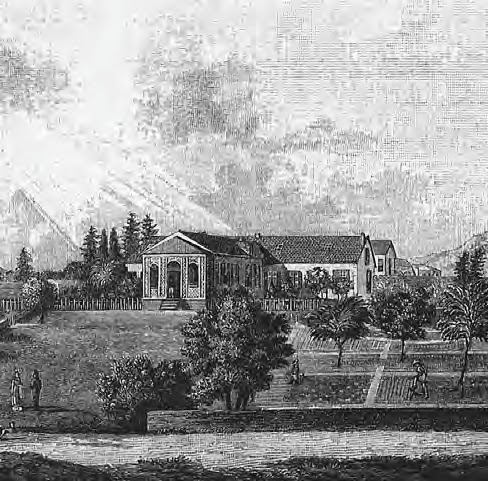 Longwood House - site of Napoleon's exile
Posted by Jim at 11:30 AM