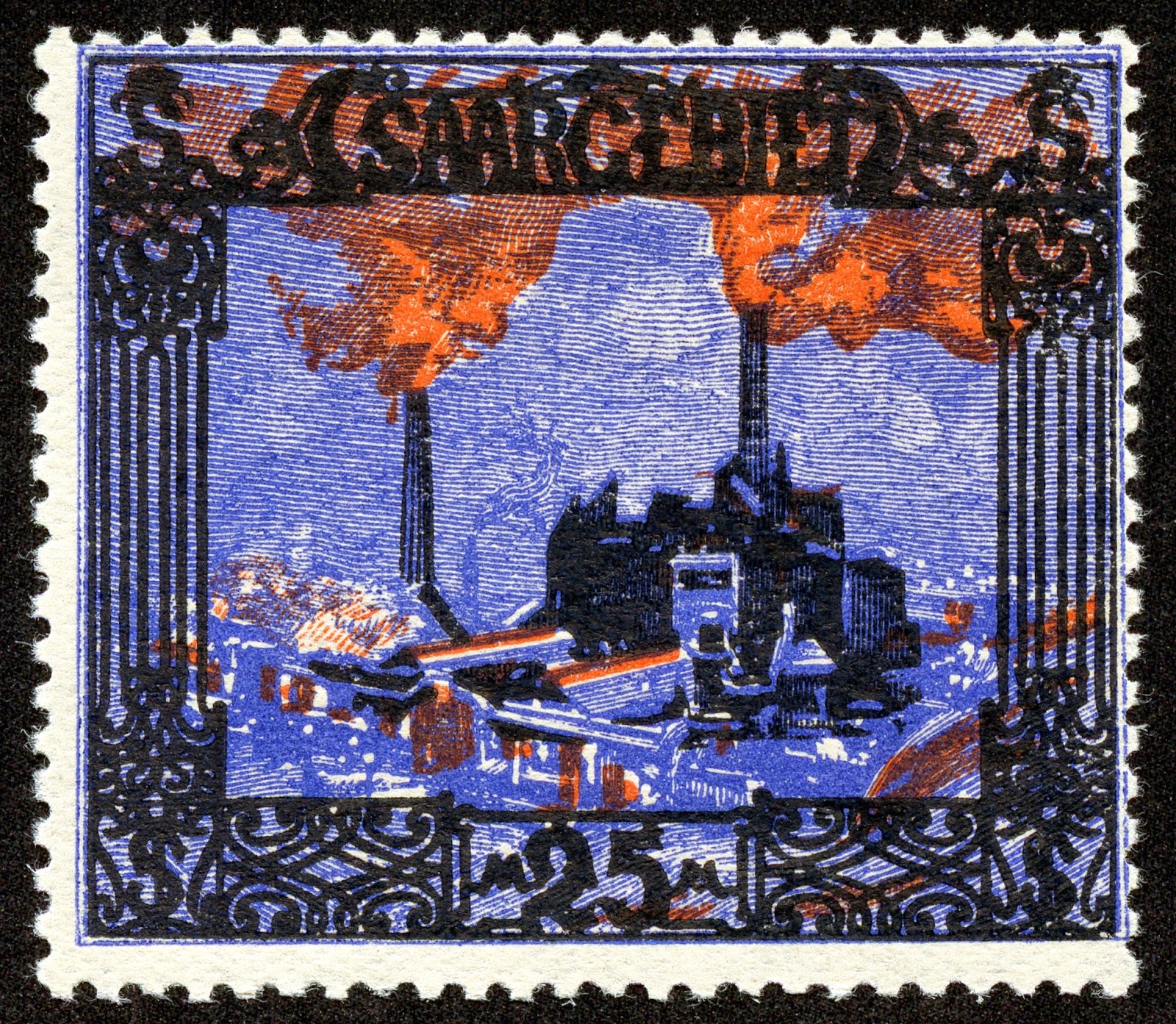 1921 Scott 83 25m ultramarine, red & black
"Burbach Steelworks, Dillingen"
Quick History
Saar or Saargebiet was a former piece of Germany by the Saar River occupied by France (mostly) and Great Britain after WW I. Saar was an industry and coal rich area, and hence an attempt by the Allied powers to neuter and punish Germany through the Treaty of Versailles.

Saarbeckengebiet Map
The territory was governed under the League of Nations mandate from 1920 to 1935. The coalfield production was given to France.

With the fifteen year Versailles Treaty mandate running out in 1935, a plebiscite was held, and 90% of the ethnic German population voted to join the German Reich. The other 9% voted "no", primarily because of fear of the Nazi government.

The territory was reunited with Germany on January 17, 1935.

German stamps were then used.

History repeated itself after WW II.

The territory became the Saar Protectorate under French influence on February 16, 1946. After a referendum in 1955, Saarland rejoined Germany on January 1, 1957. 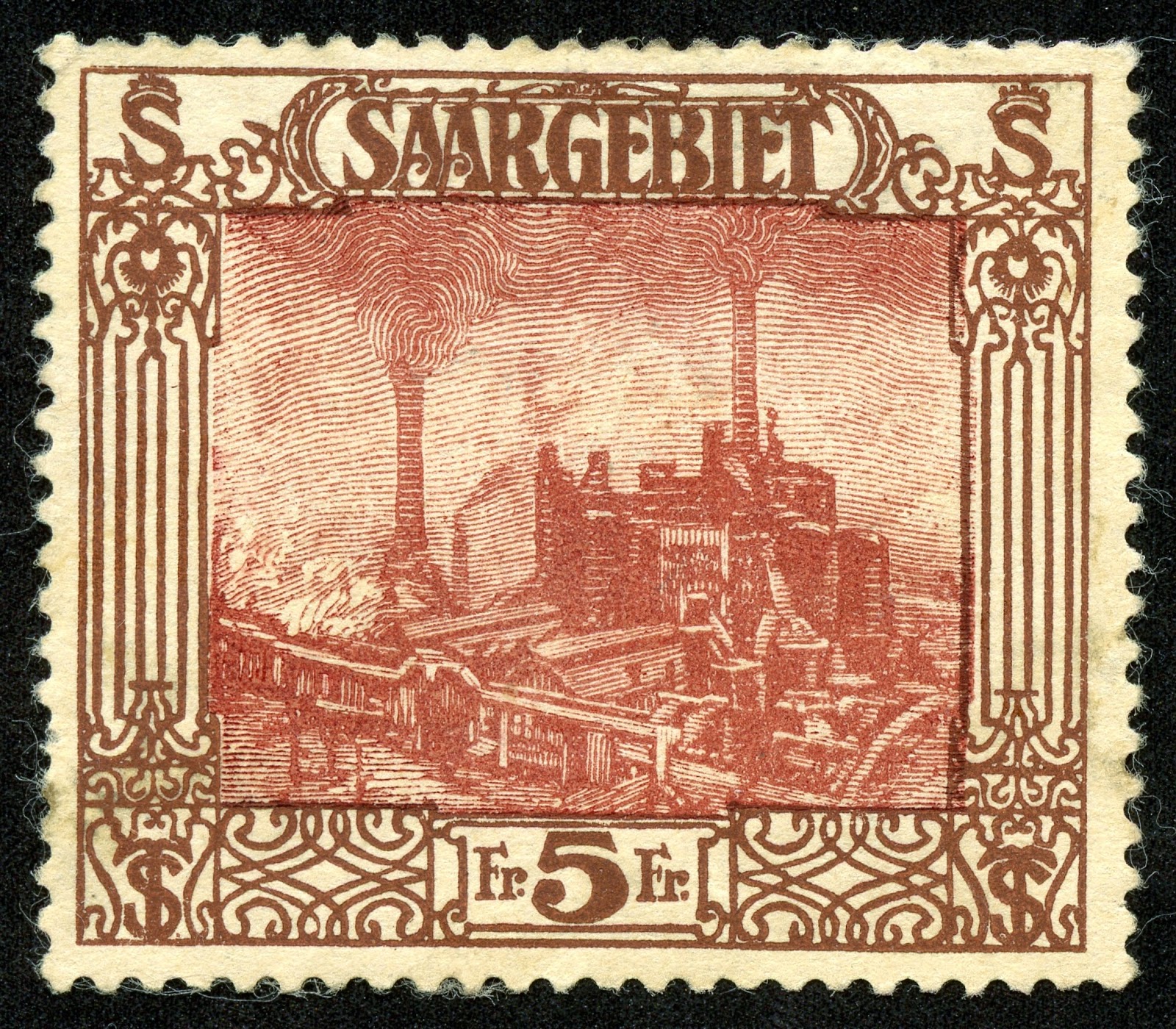 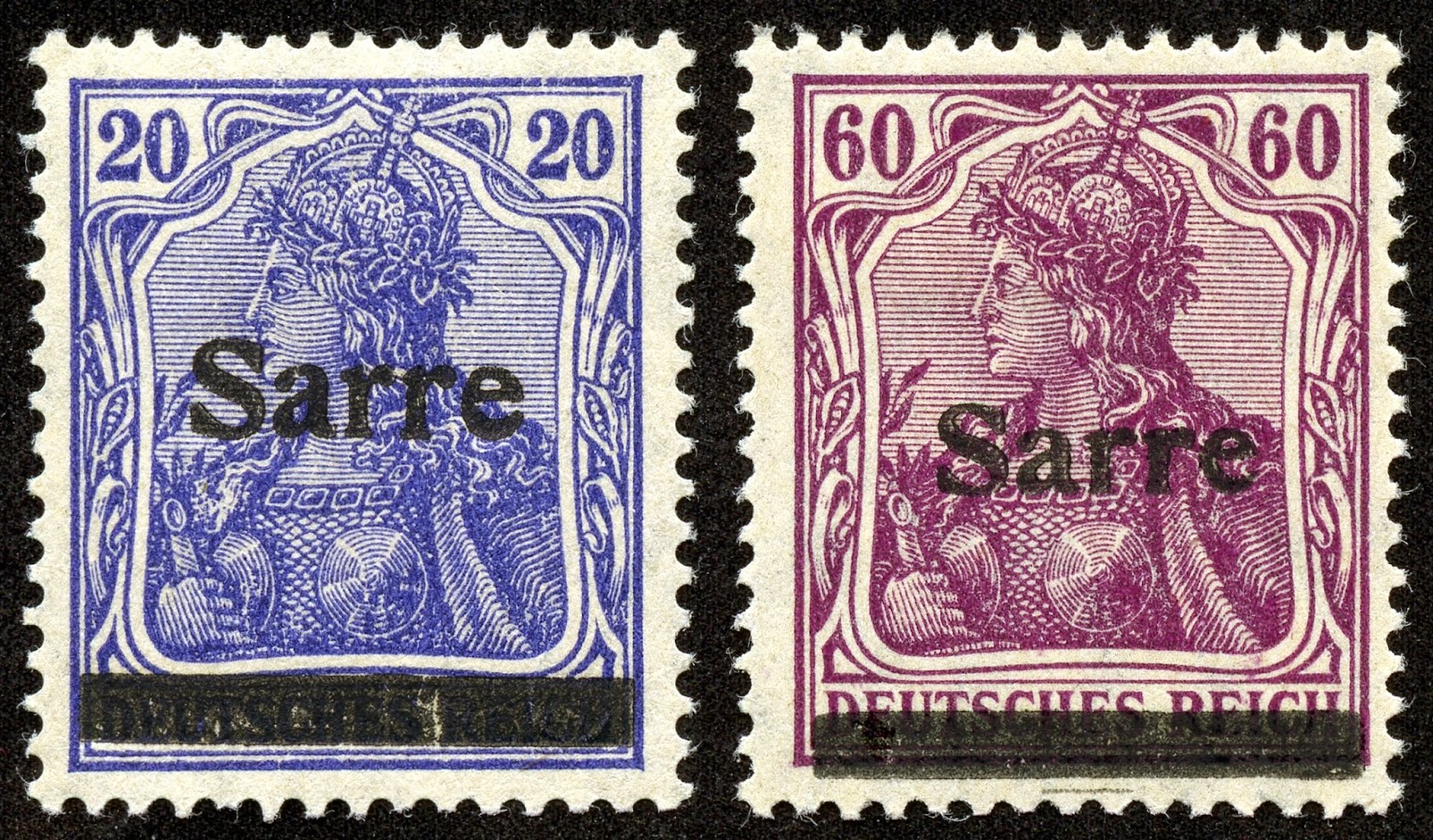 One will note, for Saar Stamps, that "used" often have a higher CV than "unused". 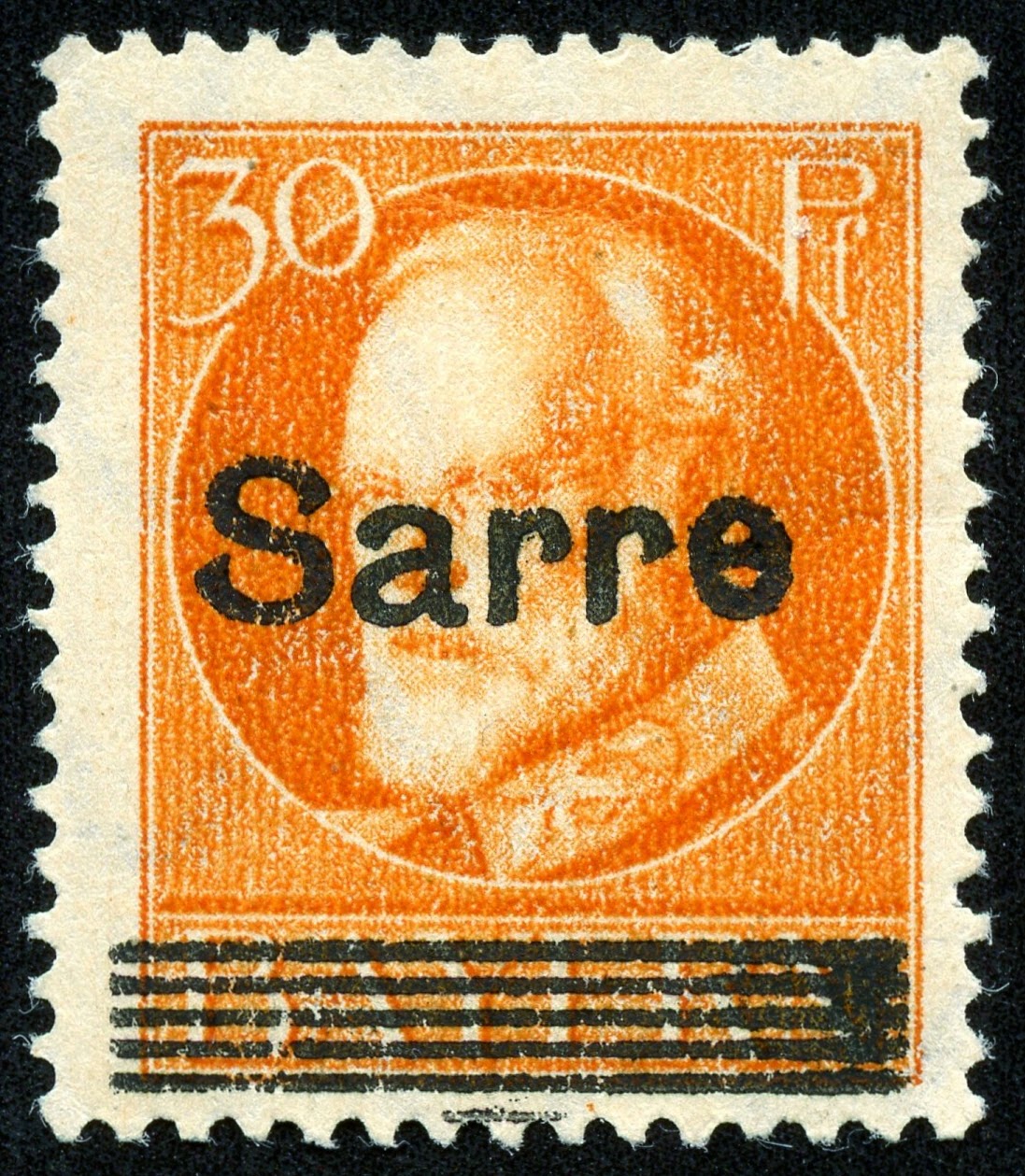 These particular stamps were never officially issued, but were available for postage, and can be found on cover. CV ranges from $35 - $1000 !. 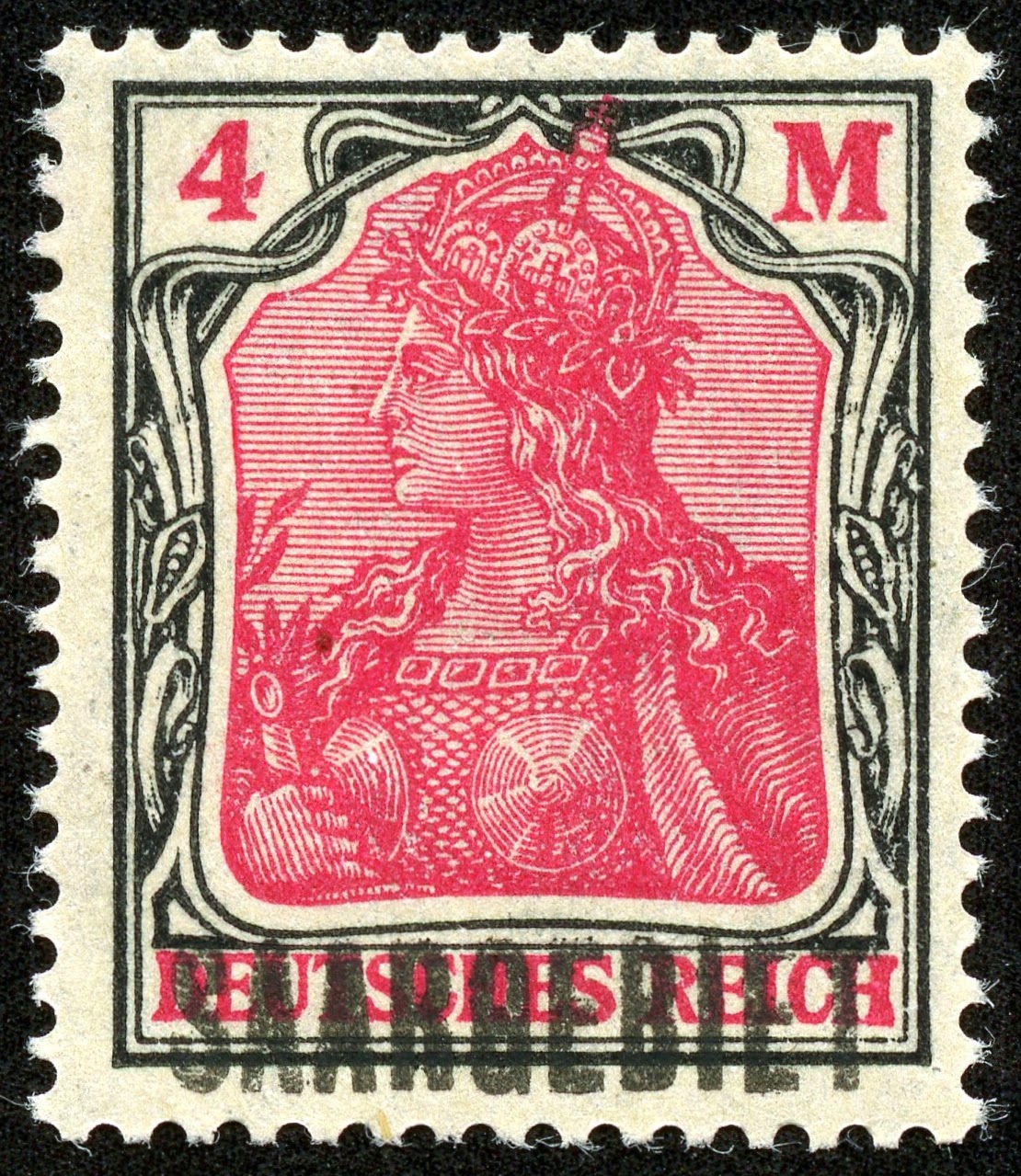 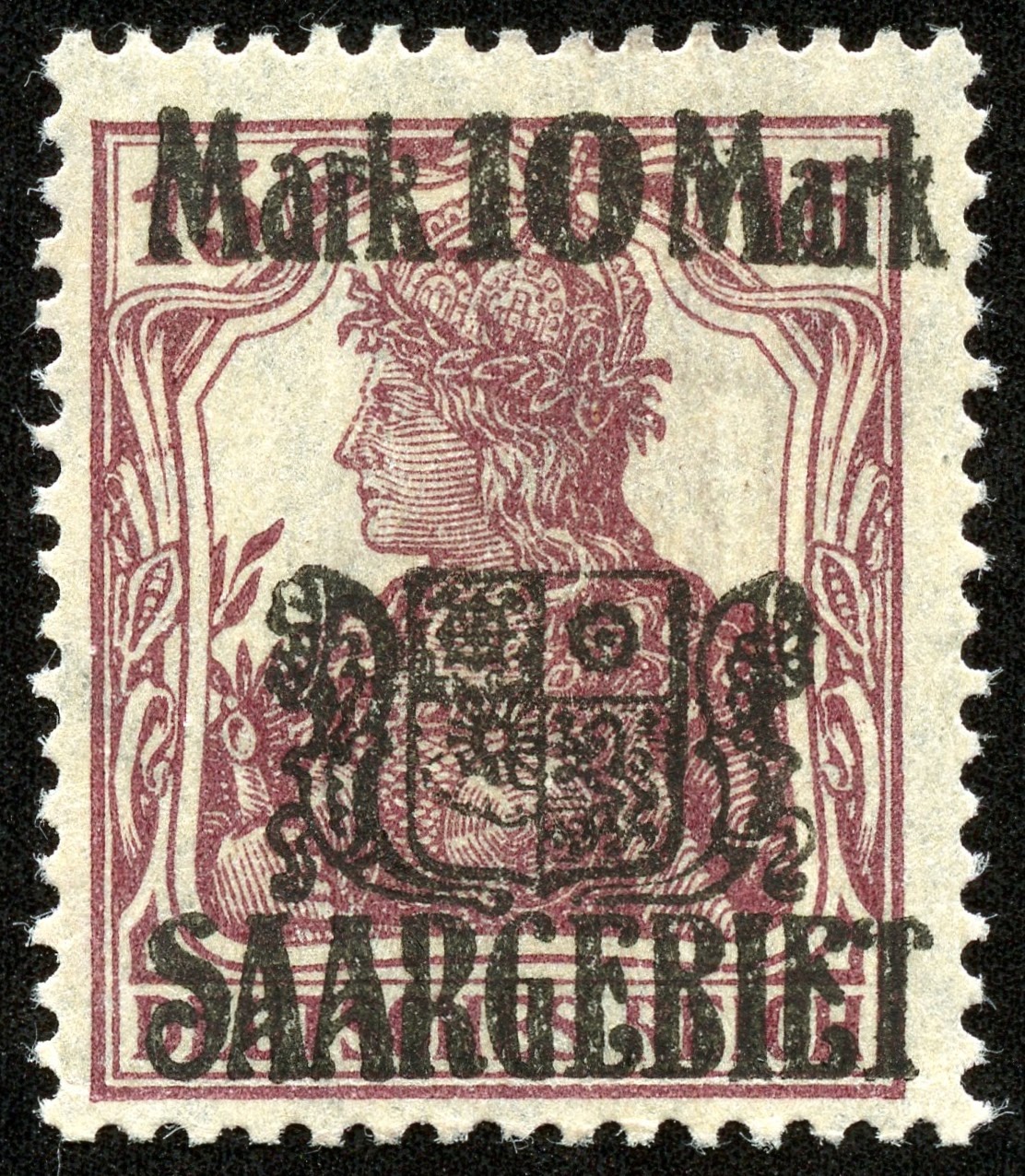 In fact, this might be a good time to mention that "overprint forgeries exist" for all of the earlier issues of Saar. 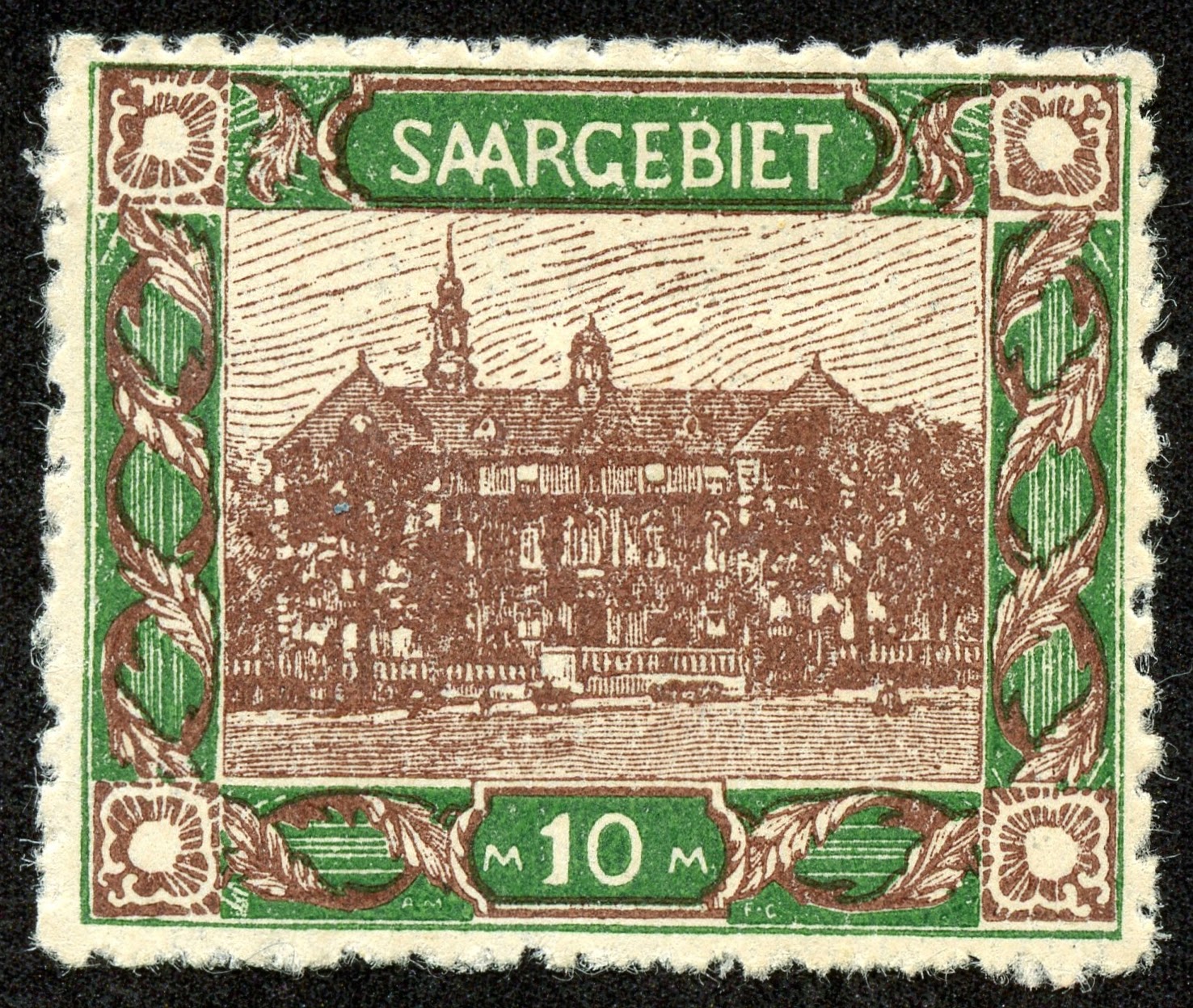 One of the all time great stamp images in my view ( "25m ultramarine, red & black  "Burbach Steelworks, Dillingen" ) from this issue heads the blog post 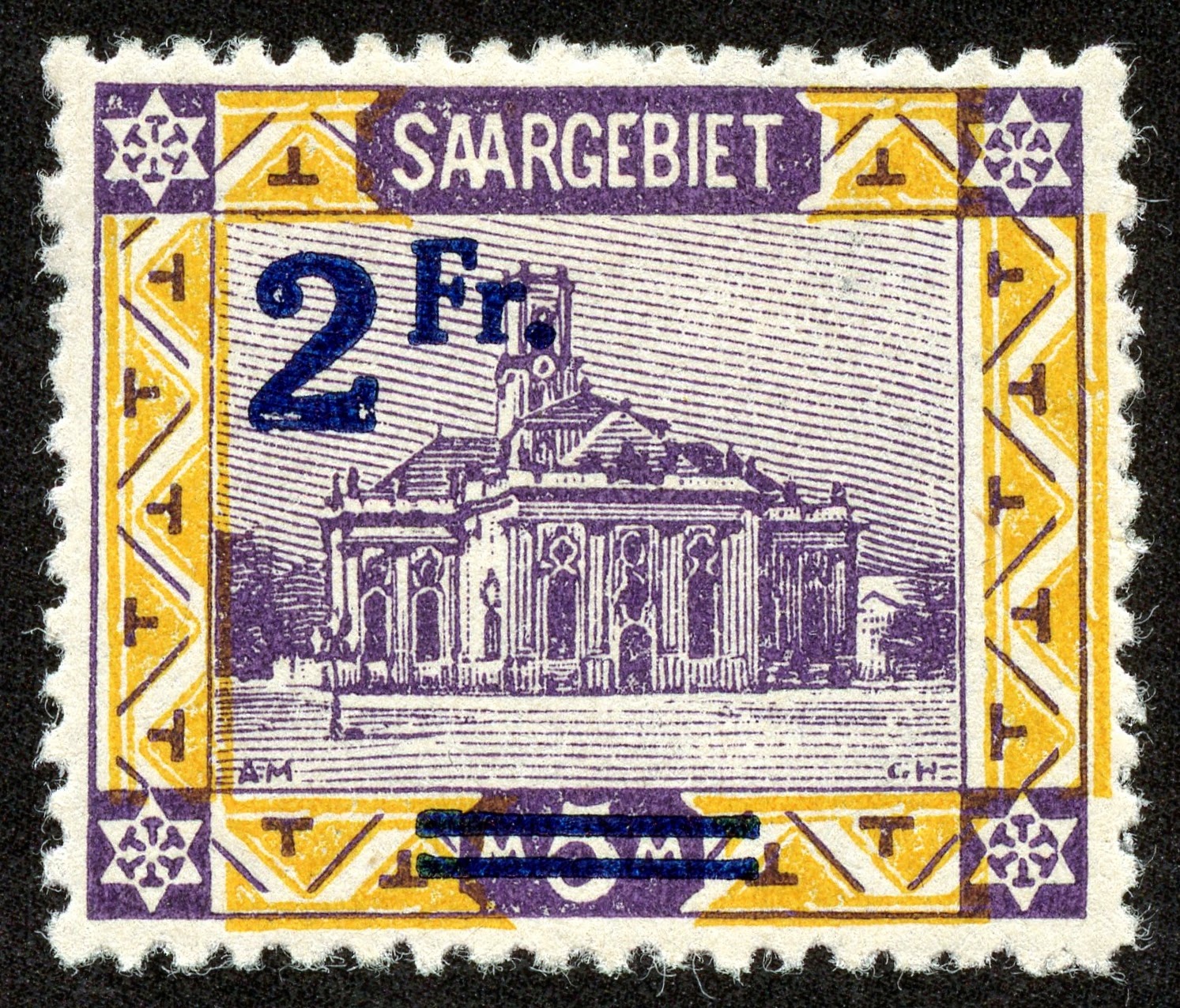 1921 Scott 96 2fr on 5m yellow & violet, blue surcharge
"St. Ludwig's Cathedral"
The preceding bi-color issue was surcharged on May 1, 1921, using three colors (red, blue, black), on 14 stamps. This was because of the changeover in currency ( Pfenning/Mark to Centimes/Franc). 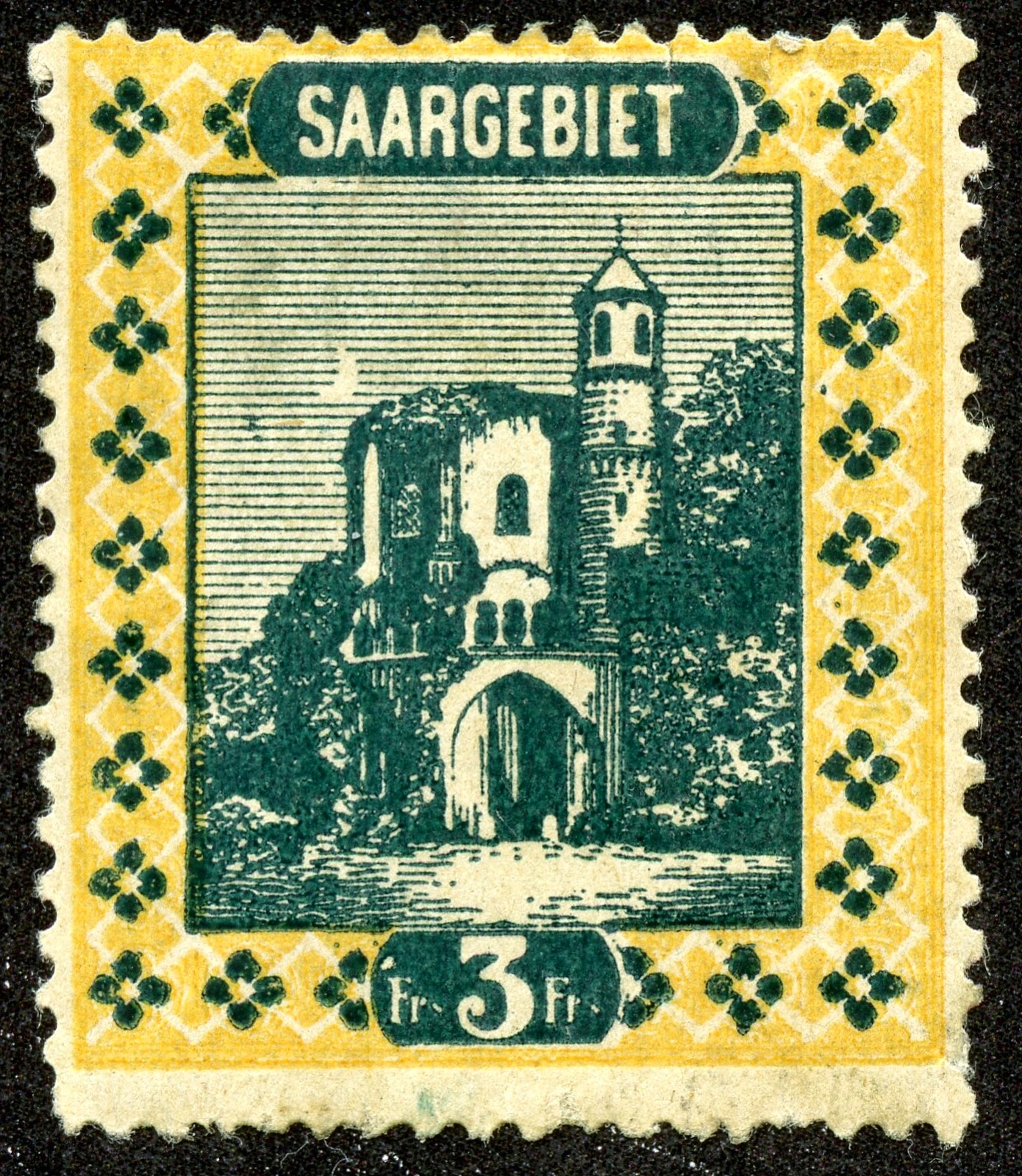 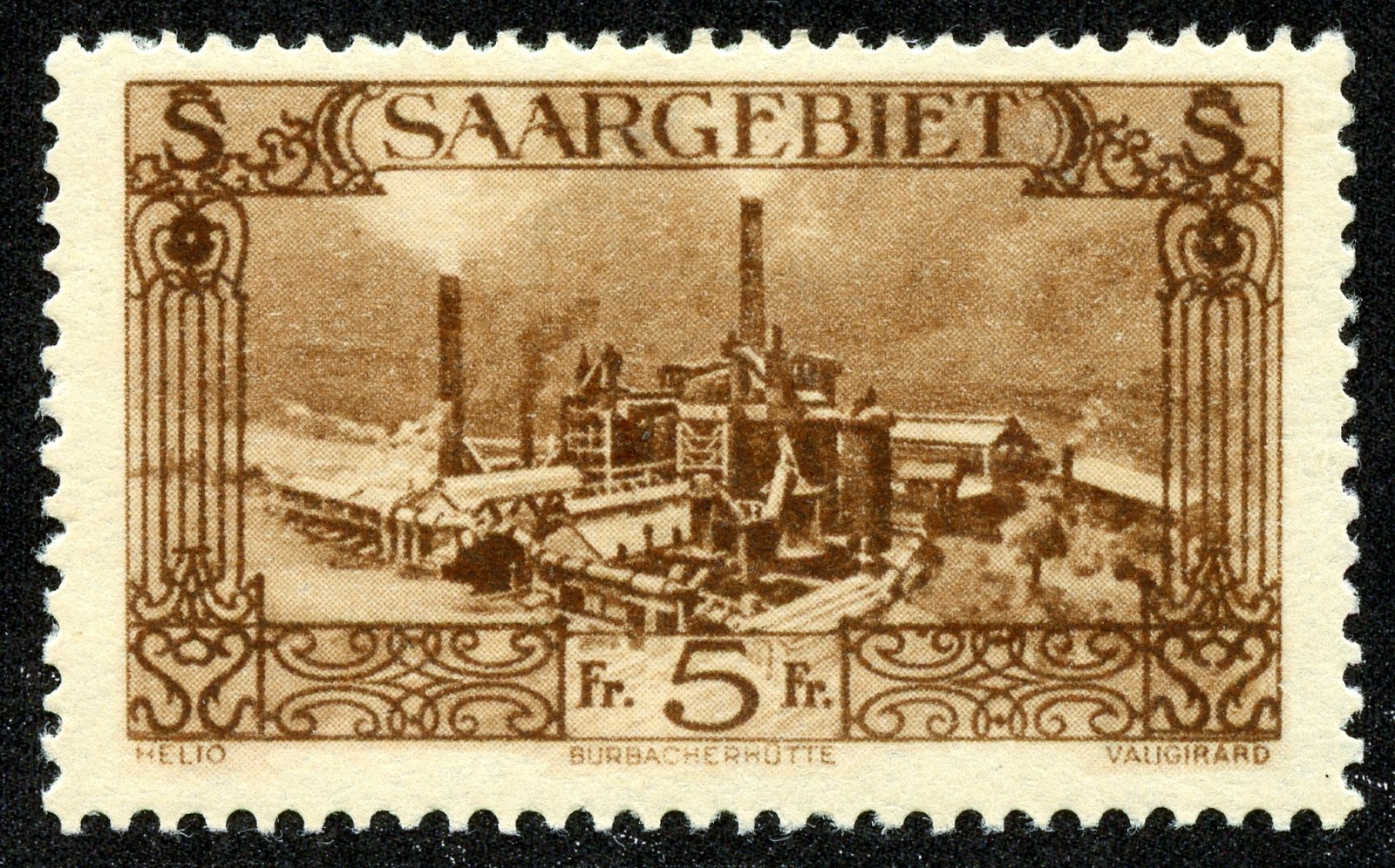 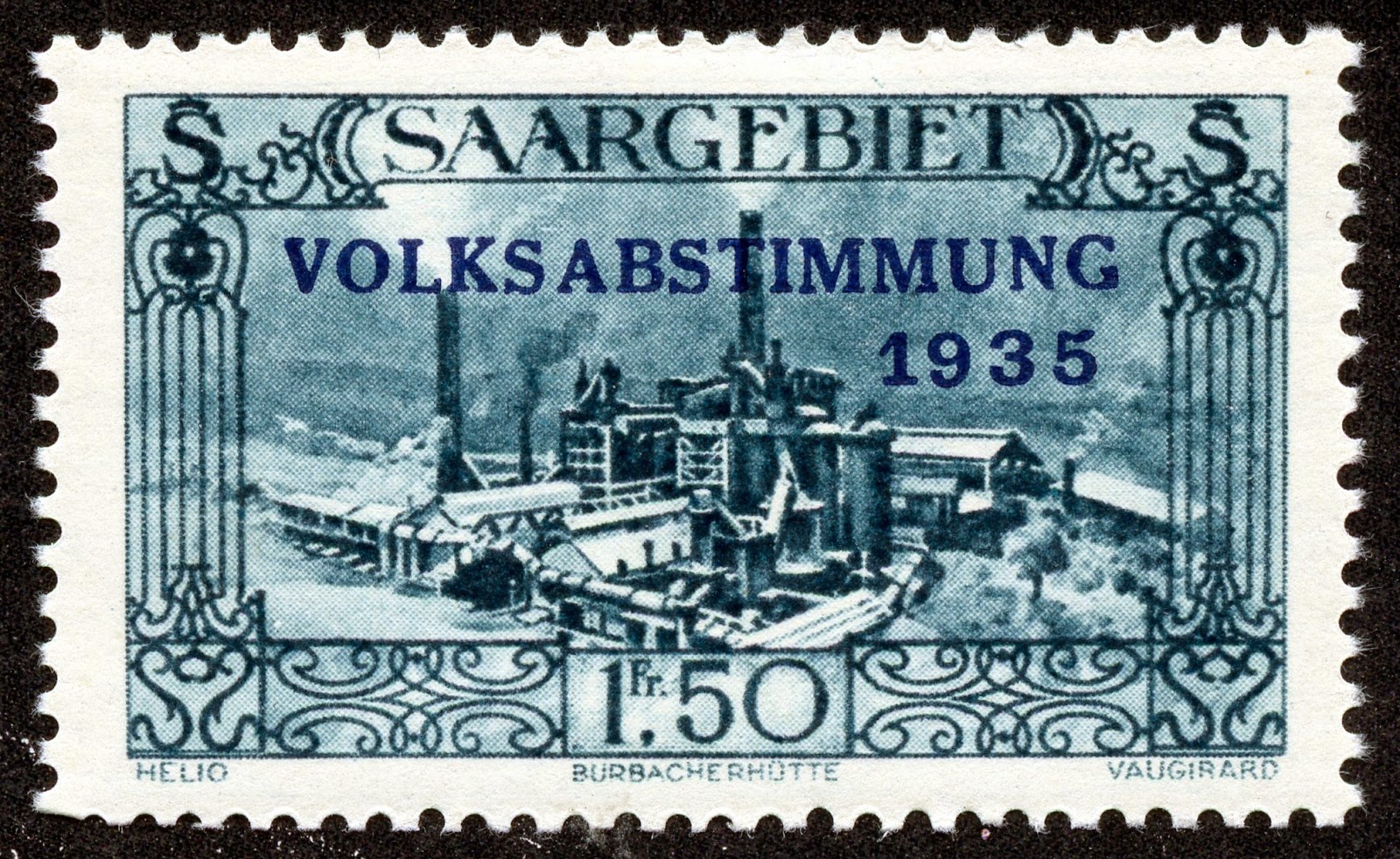 1934 Scott 150 1.50fr sapphire, blue overprint
Stamps of 1935-32 Overprinted in Various Colors
Plebiscite Issue
To publicize the plebiscite, sixteen regular issue stamps from 1925-32 were overprinted and released on November 1, 1934. The overprint is in various colors. 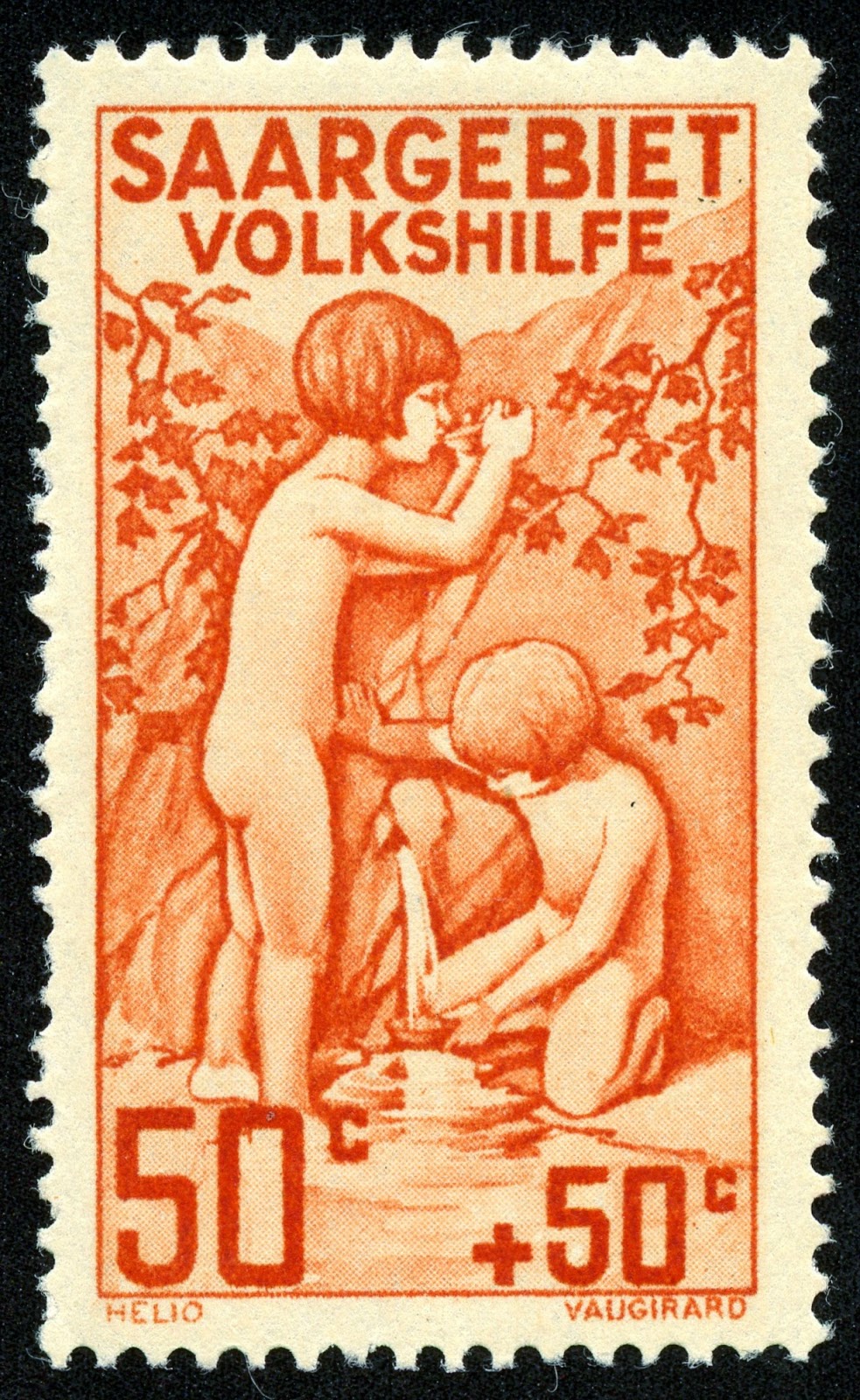 1926 Scott B3 50c + 50c red orange
"Children getting Drink at Spring"
Semi-postal stamps are more popular in Europe, and therefore it is not surprising to find semi-postals issued between 1926-1934. Generally, the 60 semi-postals found in the Scott catalogue have a higher CV than the regular issues. Most are in the $4+-$20+ range. Used condition has a higher CV.

An example from the  first semi-postals- a 1926 four stamp issue- is shown here. Nicely designed. 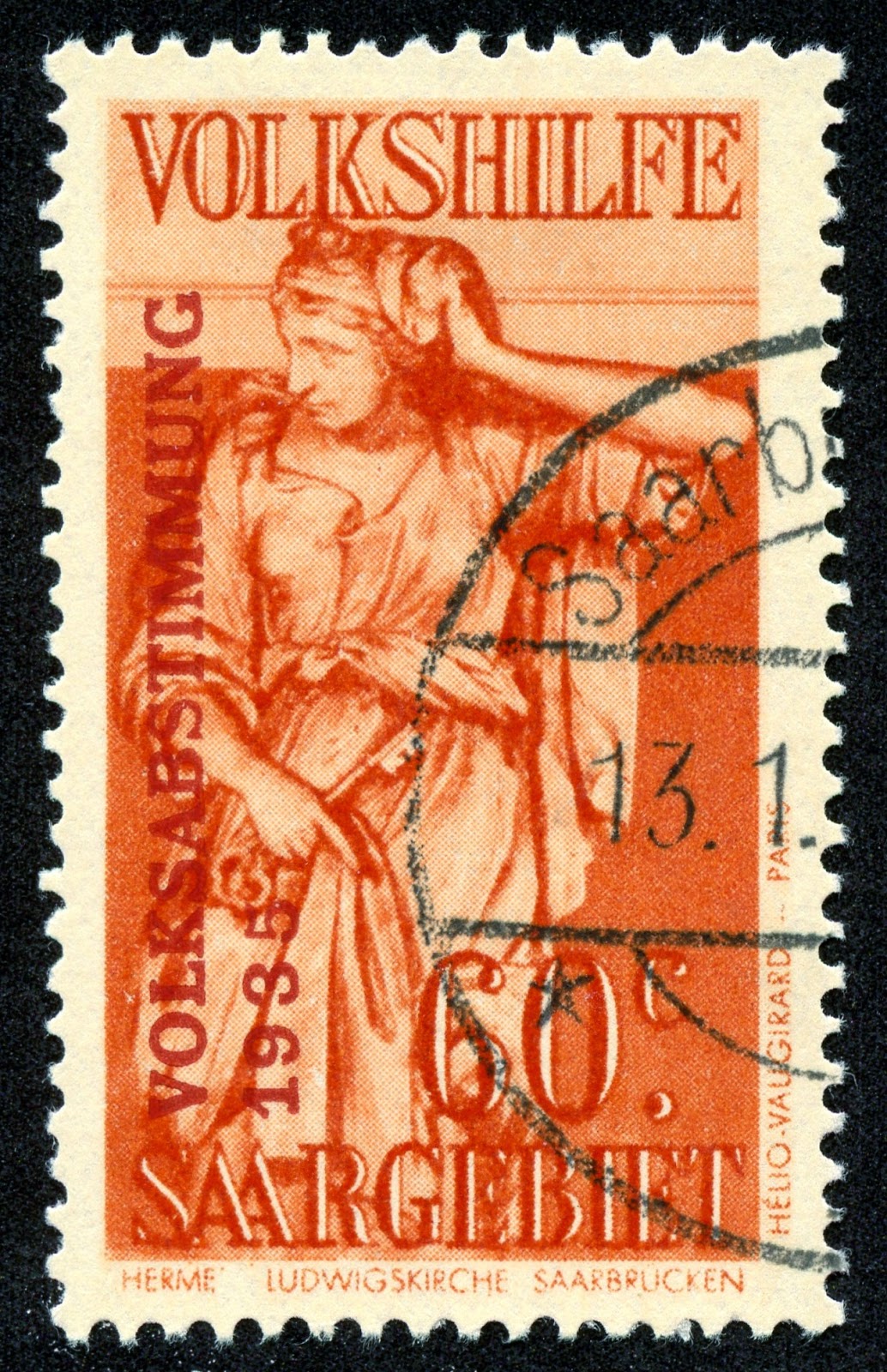 As far as I can tell, all of the Saar semi-postals were printed using photogravure. 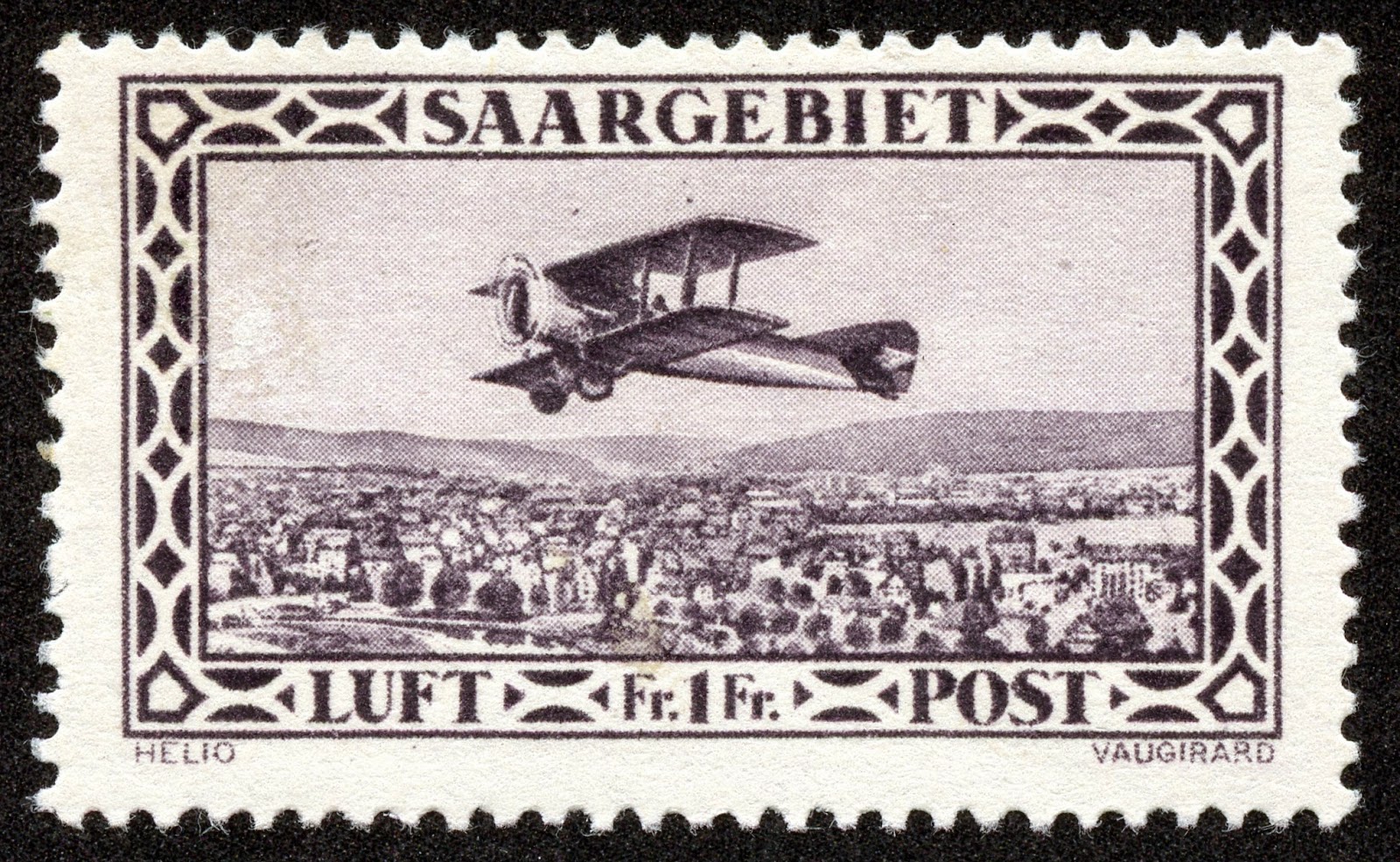 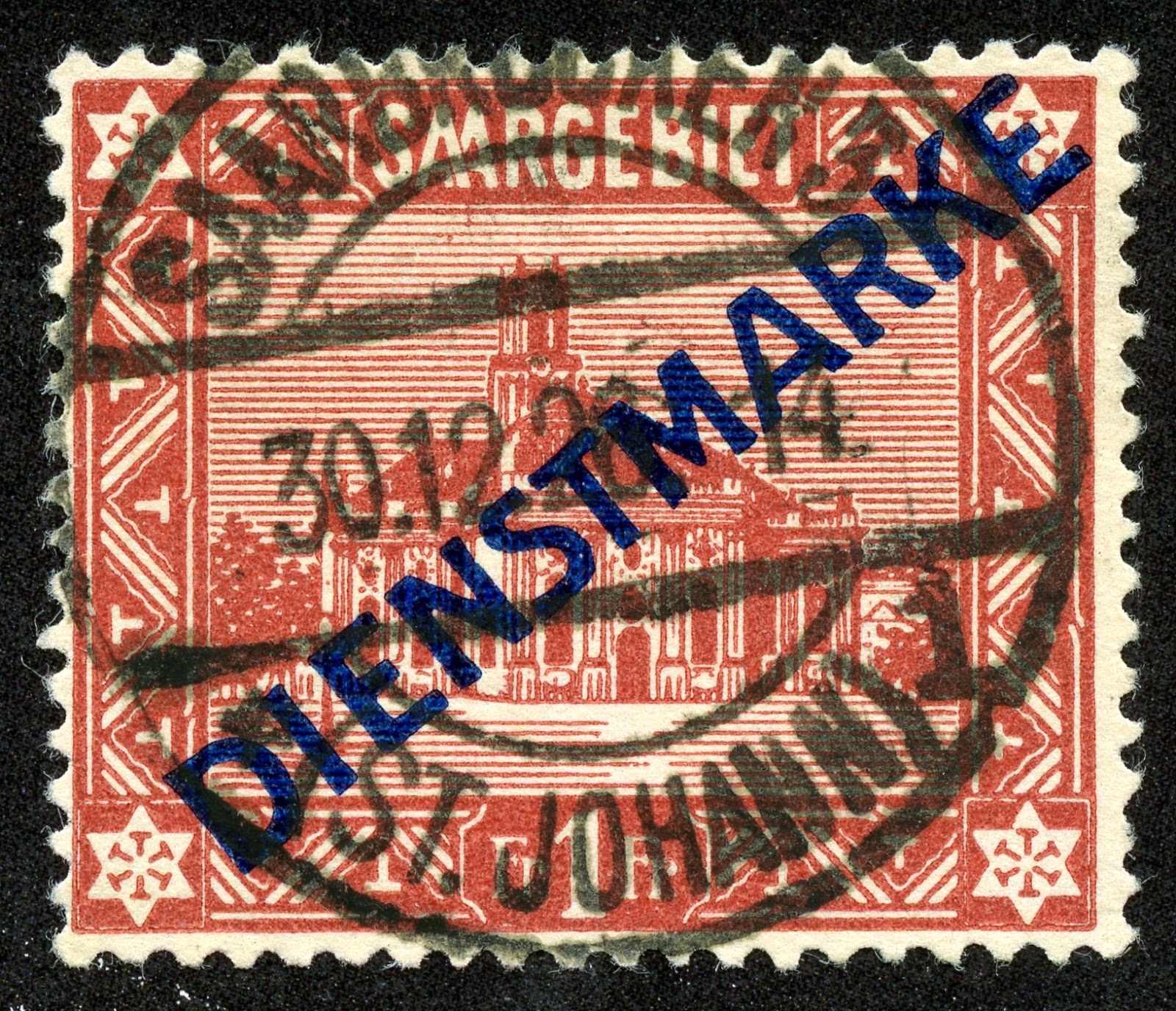 1922 Scott O15 1fr brown red, blue overprint
Fifteen Official stamps were produced between 1922-23 on the regular 1922-23 issue using a "Dienstmarke" overprint, either in red or blue.

Of interest, the overprint can be found with two overprint types.

Illustrated above is Type 2: Center bar of "E" centered, "S" has a flat bottom, "A" slightly inclined to right. 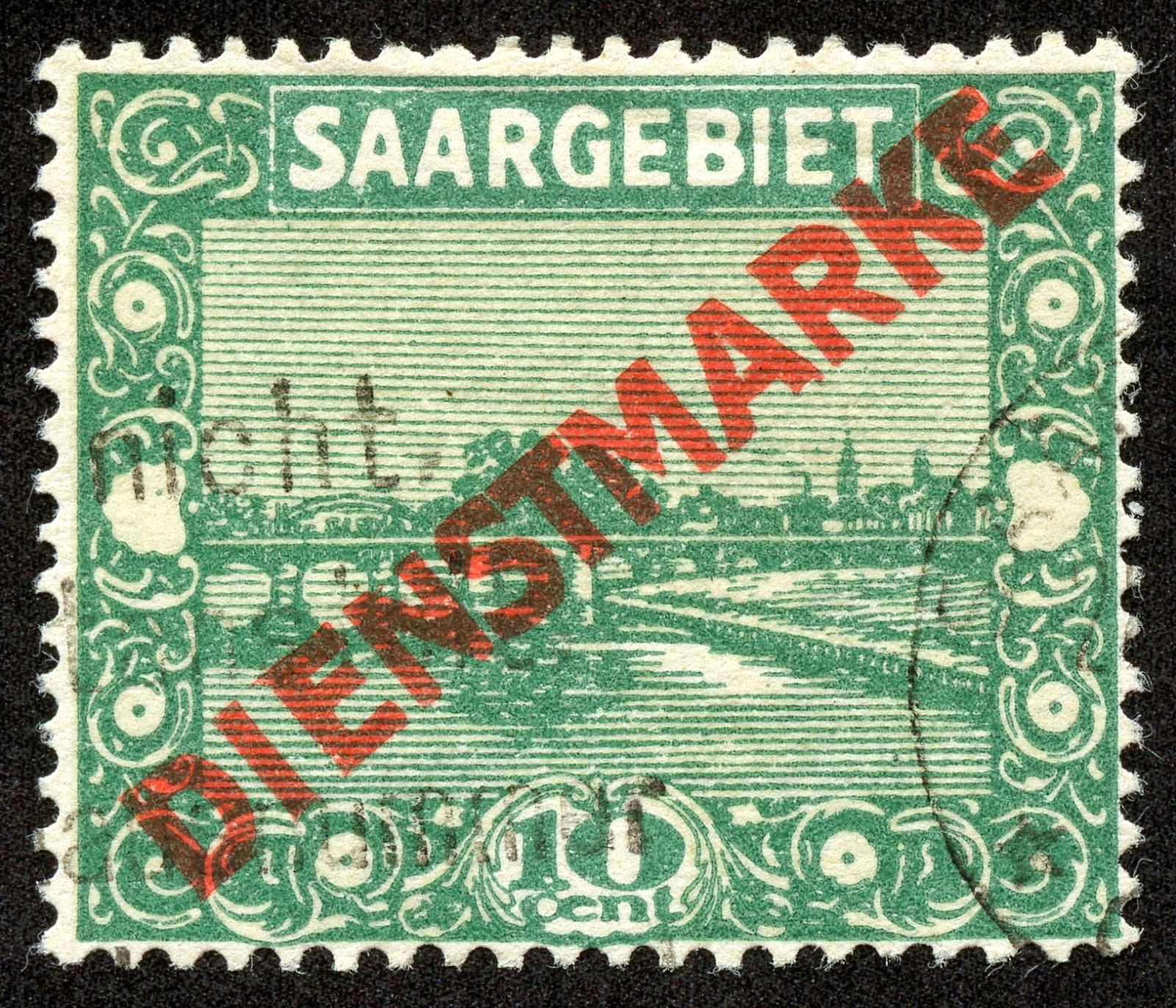 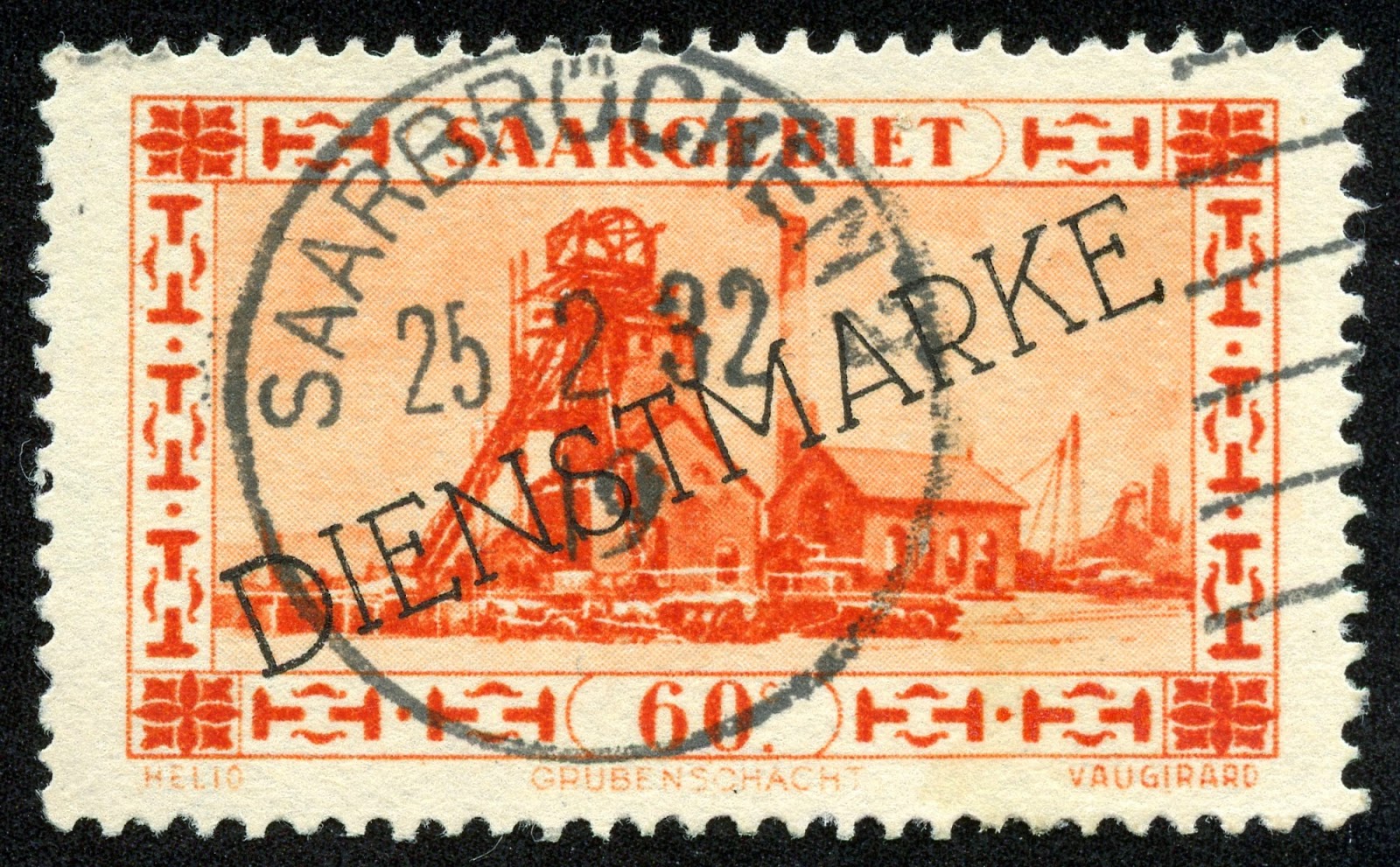 This issue also comes in two types of overprints. 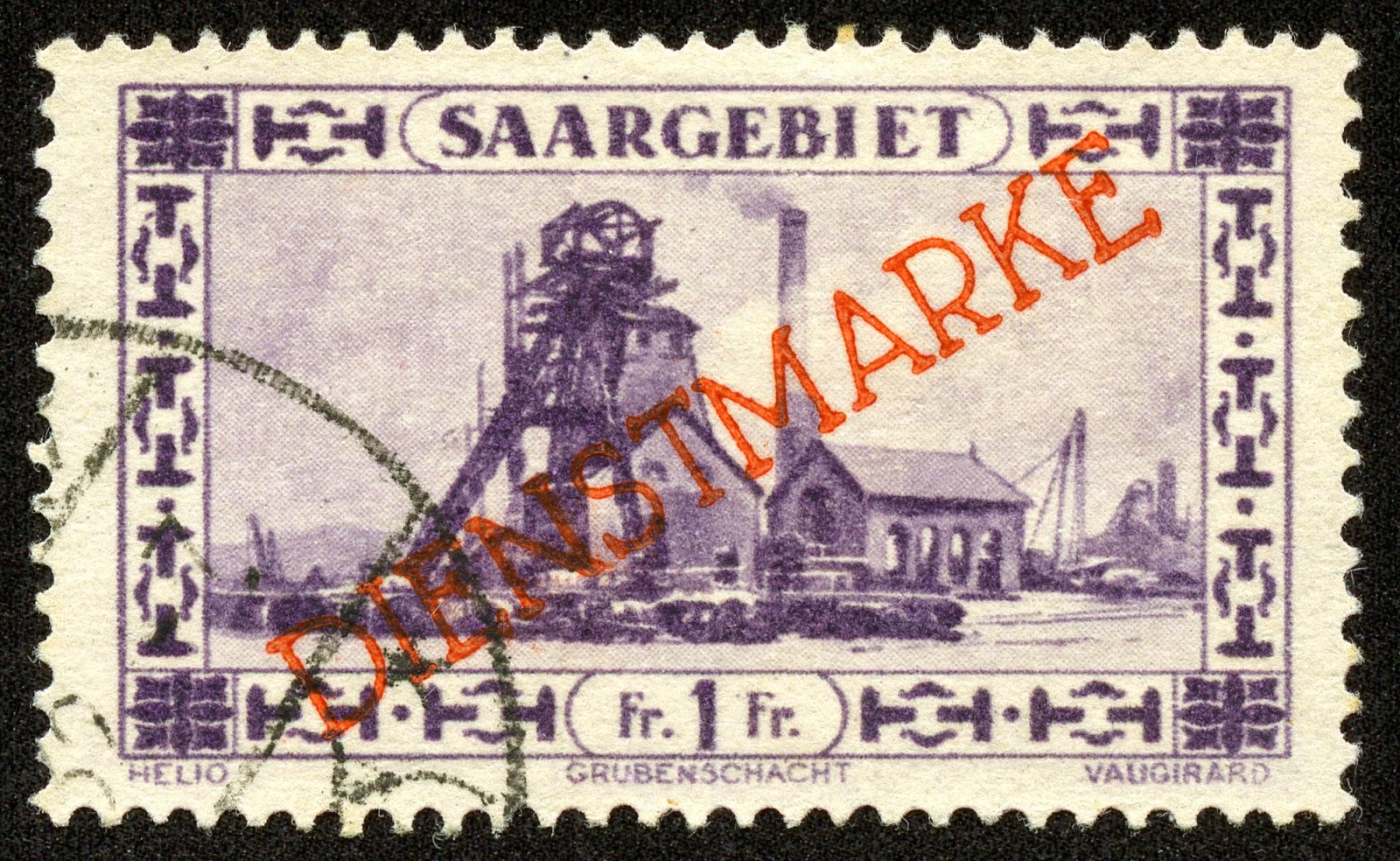 1927 Scott O25 1fr violet, red-orange overprint
This is an example of a Type I overprint, which is printed at a 32 degree angle. 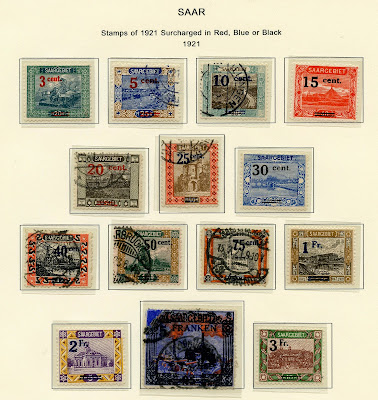 1921 Surcharged Issue in Deep Blue
Deep Blue (Steiner) has 16 pages for the major number spaces in the Scott catalogue.

For myself, I have many stamps in both unused and used condition, and I wanted to keep an example of both. So I have added several extra quadrilled pages . 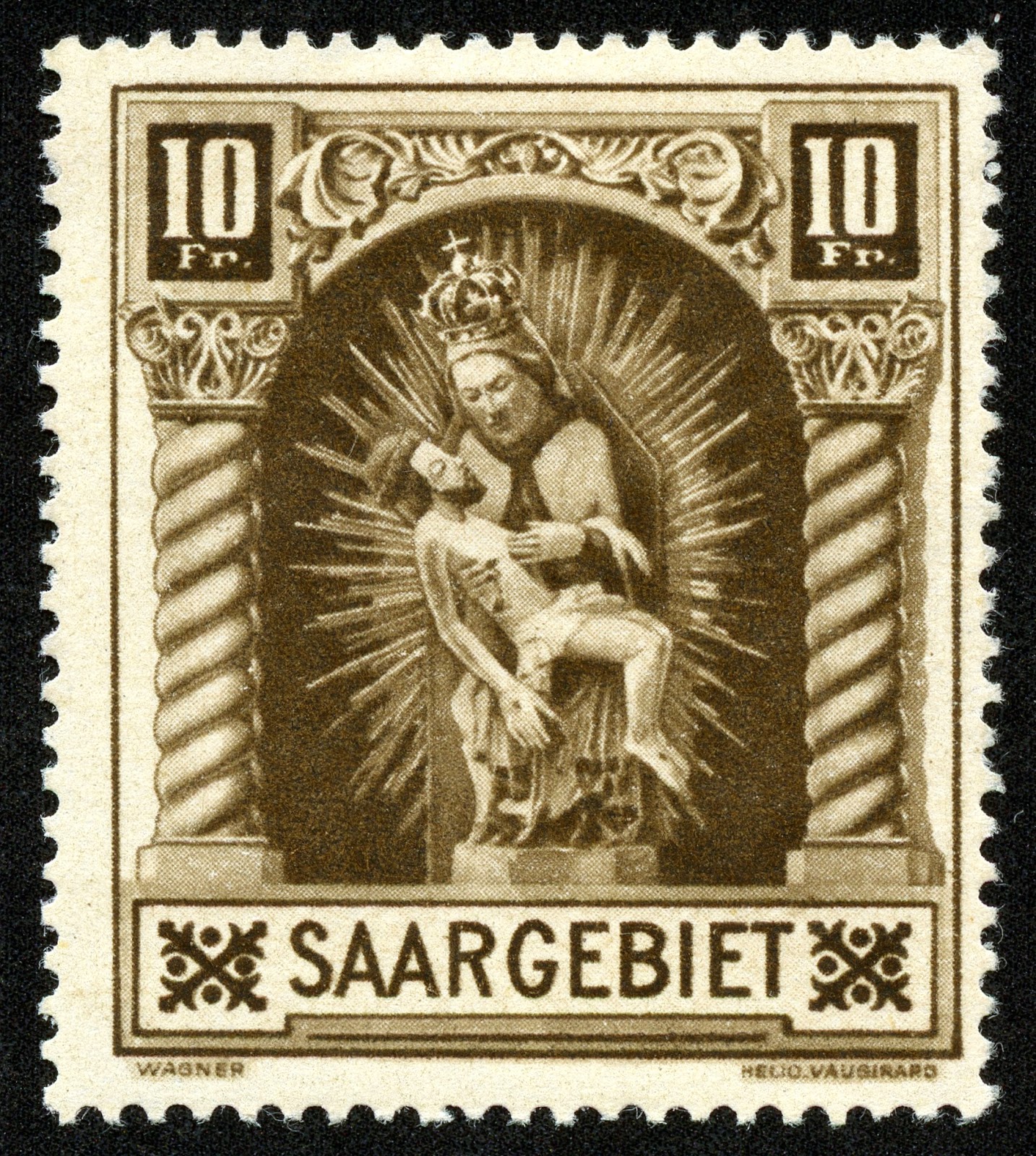 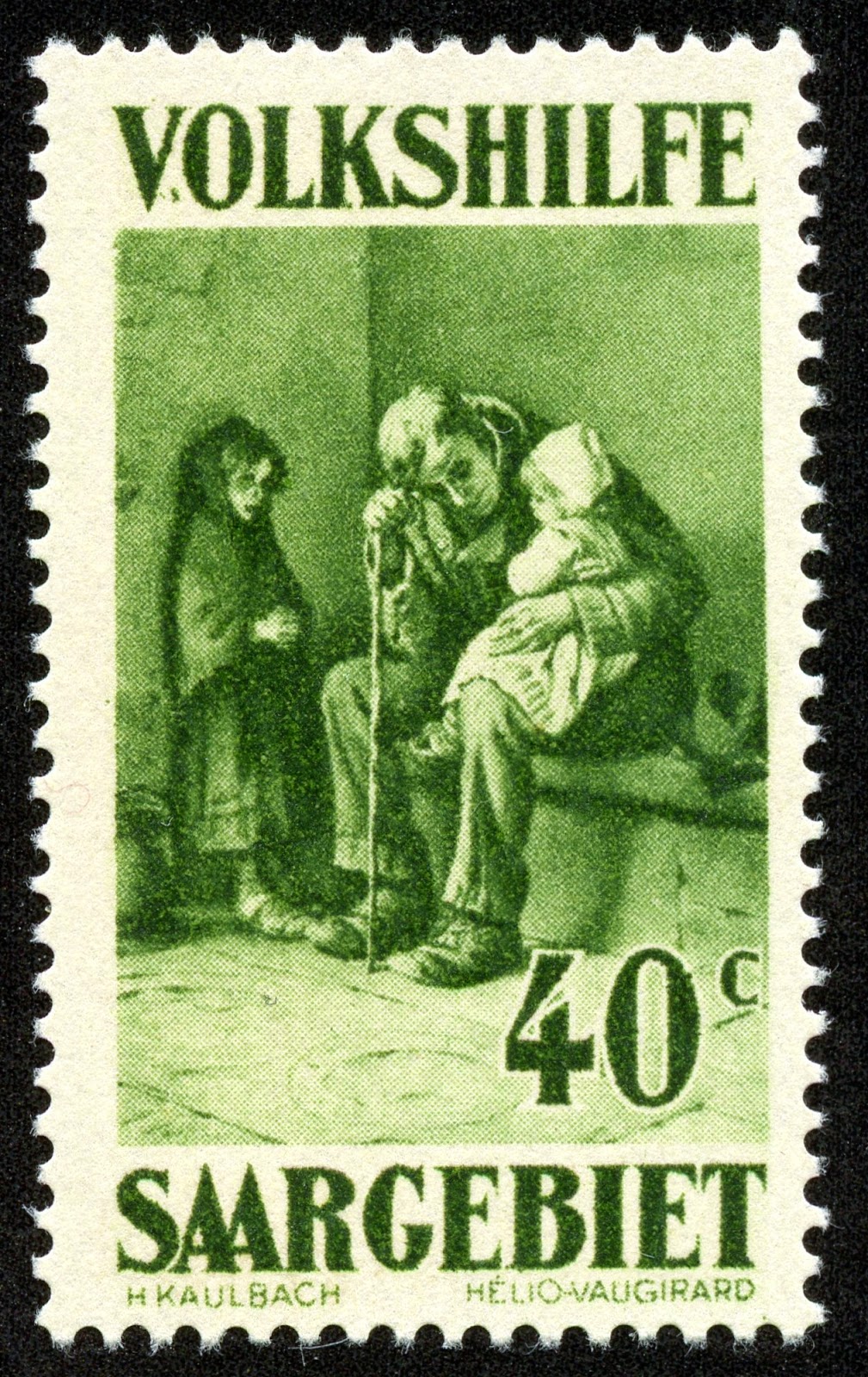 1929 Scott B16 40c (+15c) olive green
"Orphaned" by Kaulbach
Out of the Blue
Every time I visit a "German Sphere" country, I am amazed by the beauty, as well as the implicit history of the stamps.

Note: Map appears to be in the public domain. Type I-III overprint scan is from the internet, but originally from a Michel catalogue.  It is used here for educational purposes.