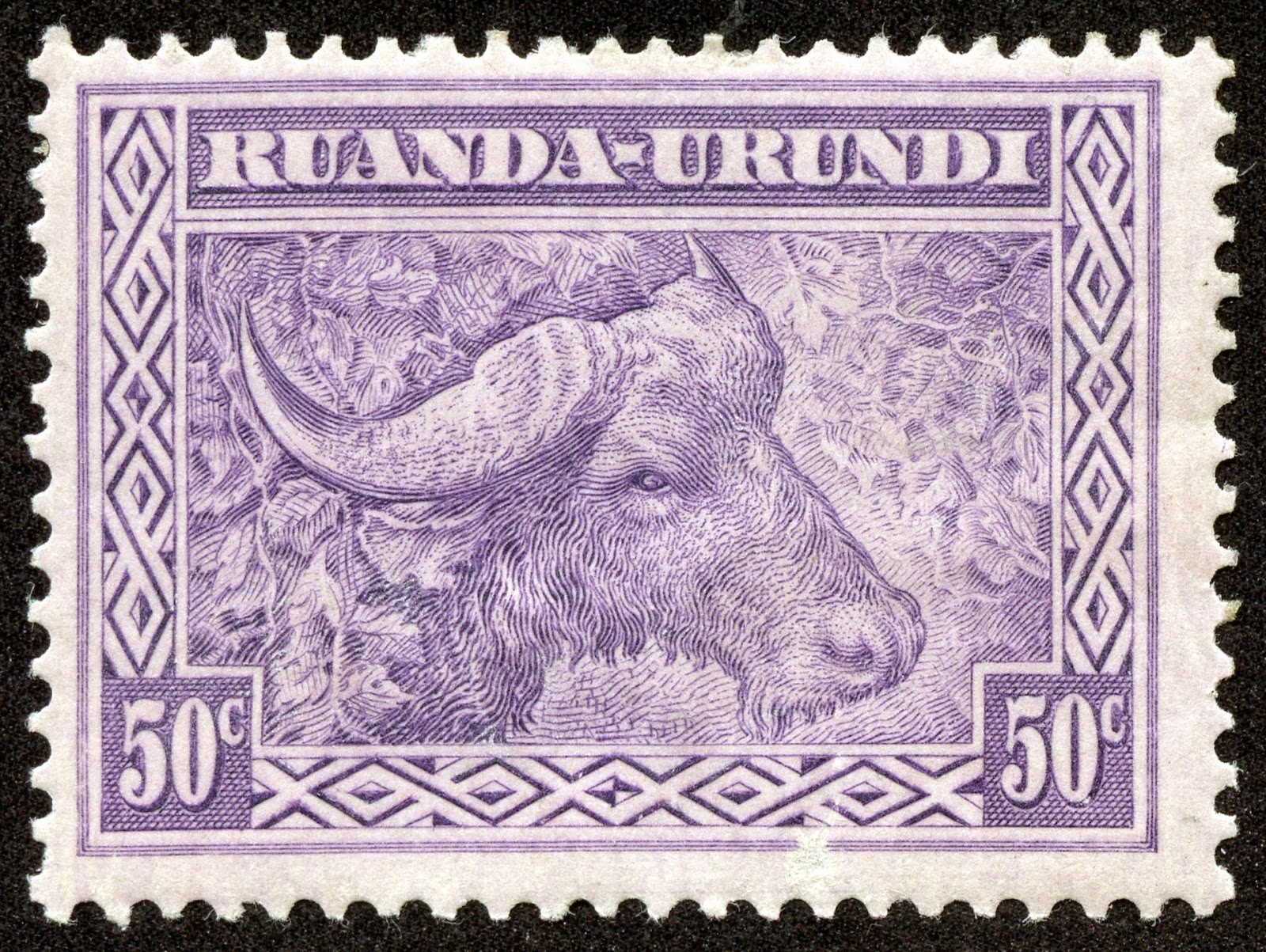 1931 Scott 42 50c gray lilac "Cape Buffalo"
Quick History
When German East Africa was occupied, and then dismantled after WW I, the lands were acquired by Belgium ( Ruanda-Urundi), Portugal ( Kionga triangle), with the largest share going to Great Britain (Tanganyika).

Ruanda-Urundi (dark green) and the Belgian Congo ( light green) 1935
Troops from the Belgian Congo had occupied this territory in 1916 during the East African Campaign. The military occupation lasted until 1924, when the territory was mandated to Belgium by the League of Nations. 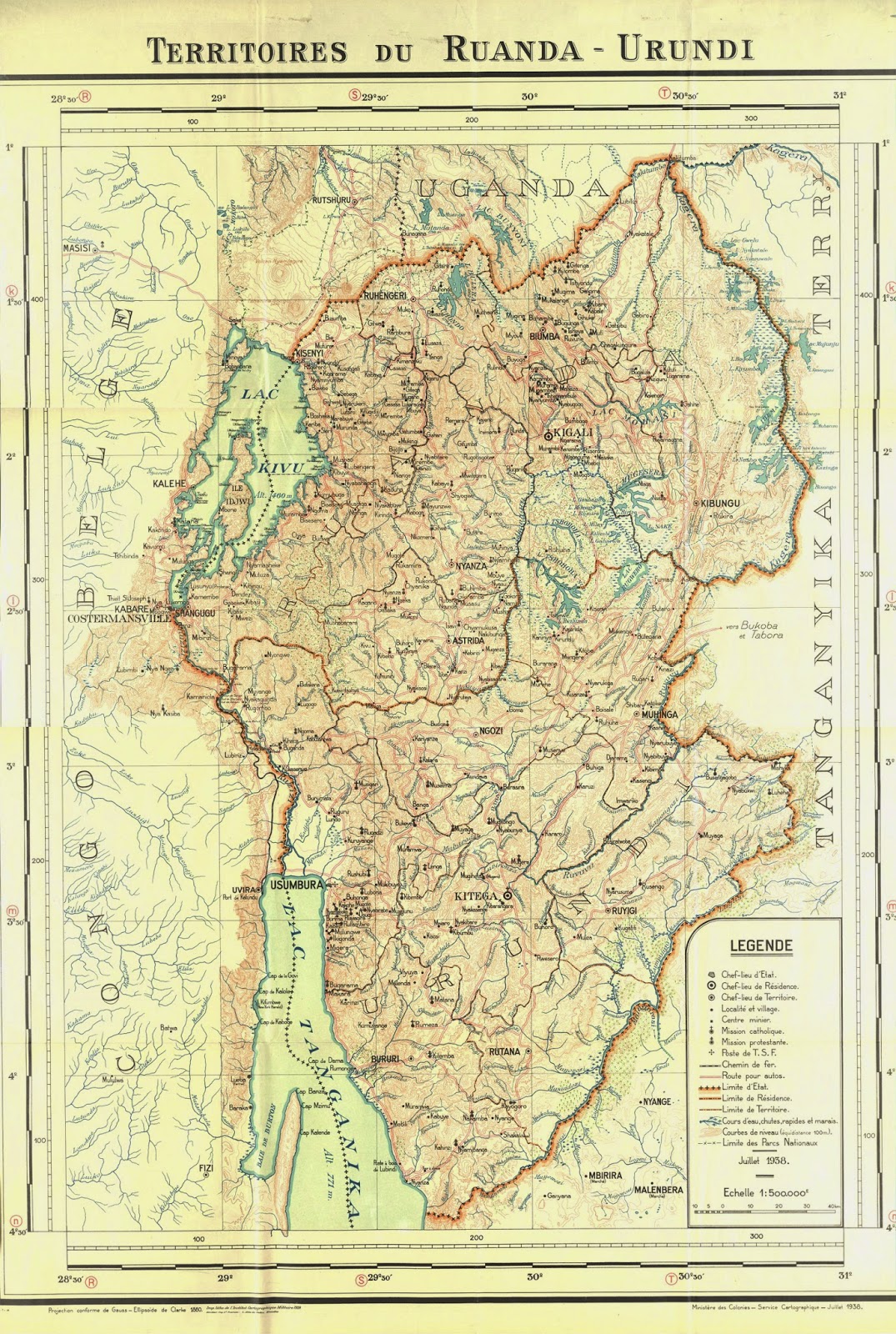 Ruanda-Urundi
Stamps were introduced in 1924 by overprinting those of the Belgium Congo. (Belgium occupation stamps of 1916-1922 are listed under German East Africa.)

Rwanda and Burundi
Ruanda-Urundi (Also known as Belgium East Africa) remained a Belgium mandate to 1945. It was administered as part of the Belgium Congo, but with separate financial funds. Coffee was the main exploitative economy.

It became a United Nations Trust Territory (administered by Belgium) between 1946-1962. Finally, the territory became the independent countries of Rwanda and Burundi. 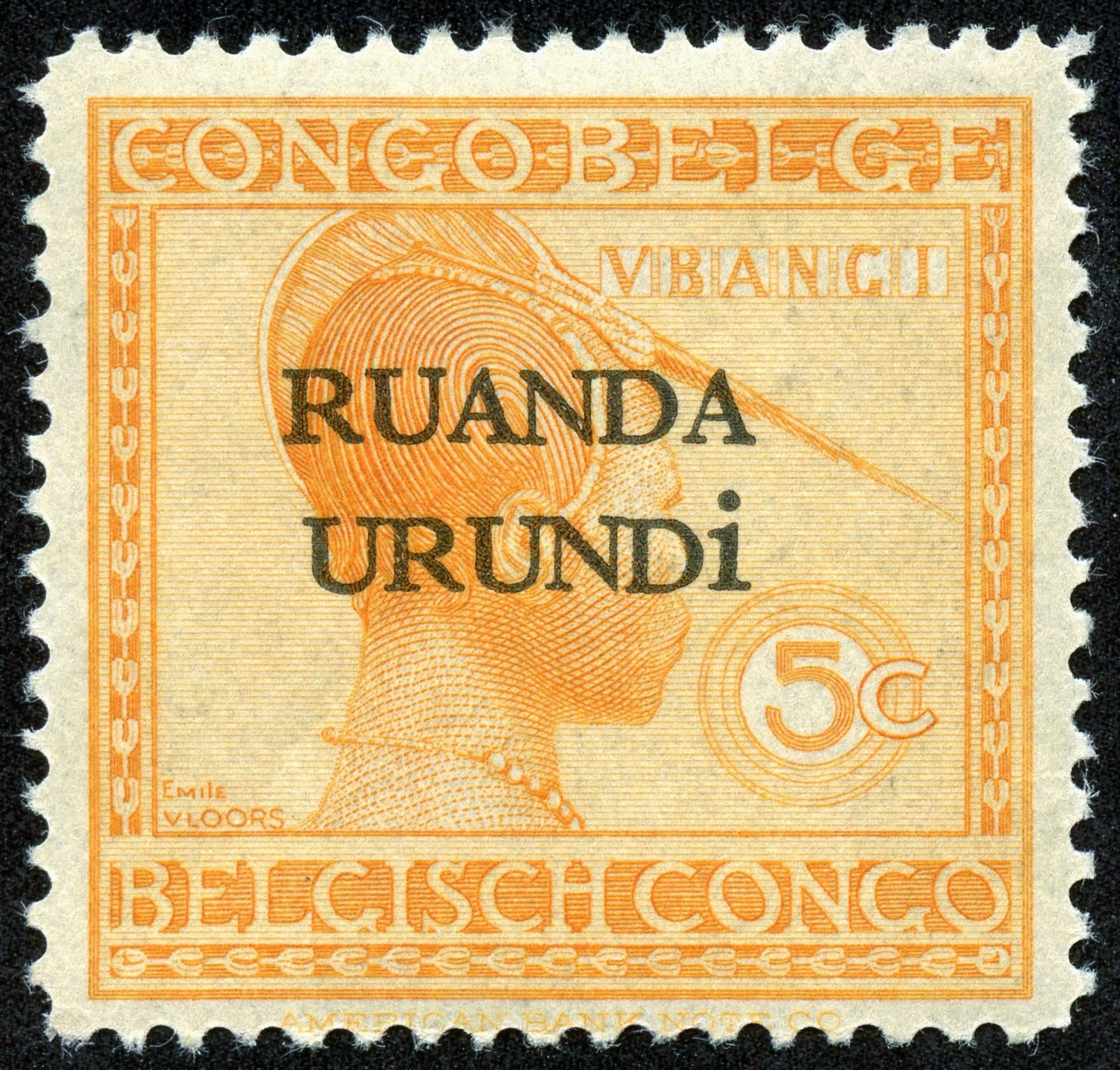 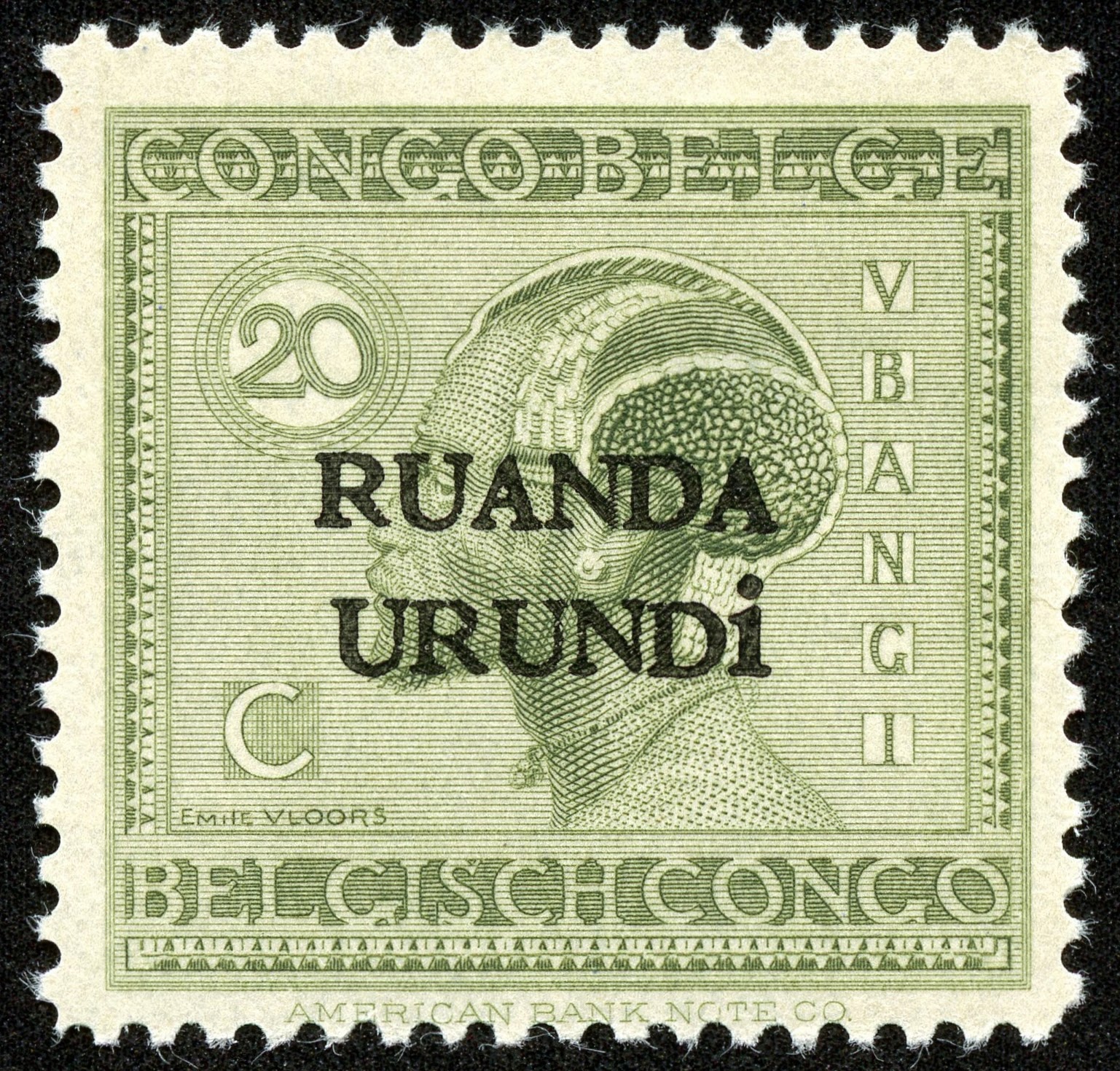 1924 20c olive green "Ubangi Man"
Stamps of the Belgium Congo 1923-26 were overprinted as shown between 1924-26 for Ruanda- Urundi. The eighteen stamp issue has 12 subjects which consists of native portraits and activities. The original Belgium Congo stamps were engraved by the American Bank Note Company of New York, and are lovely indeed. 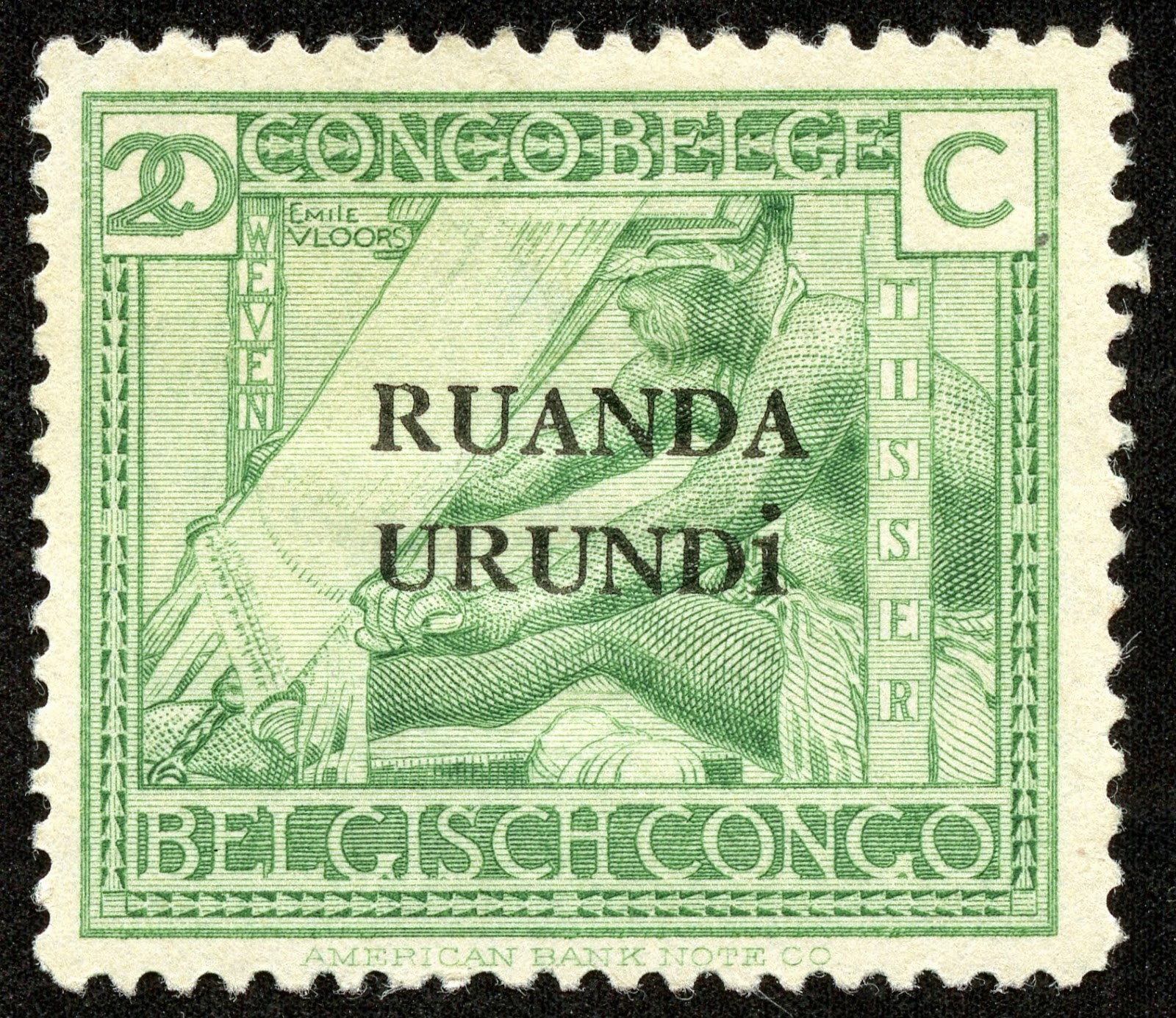 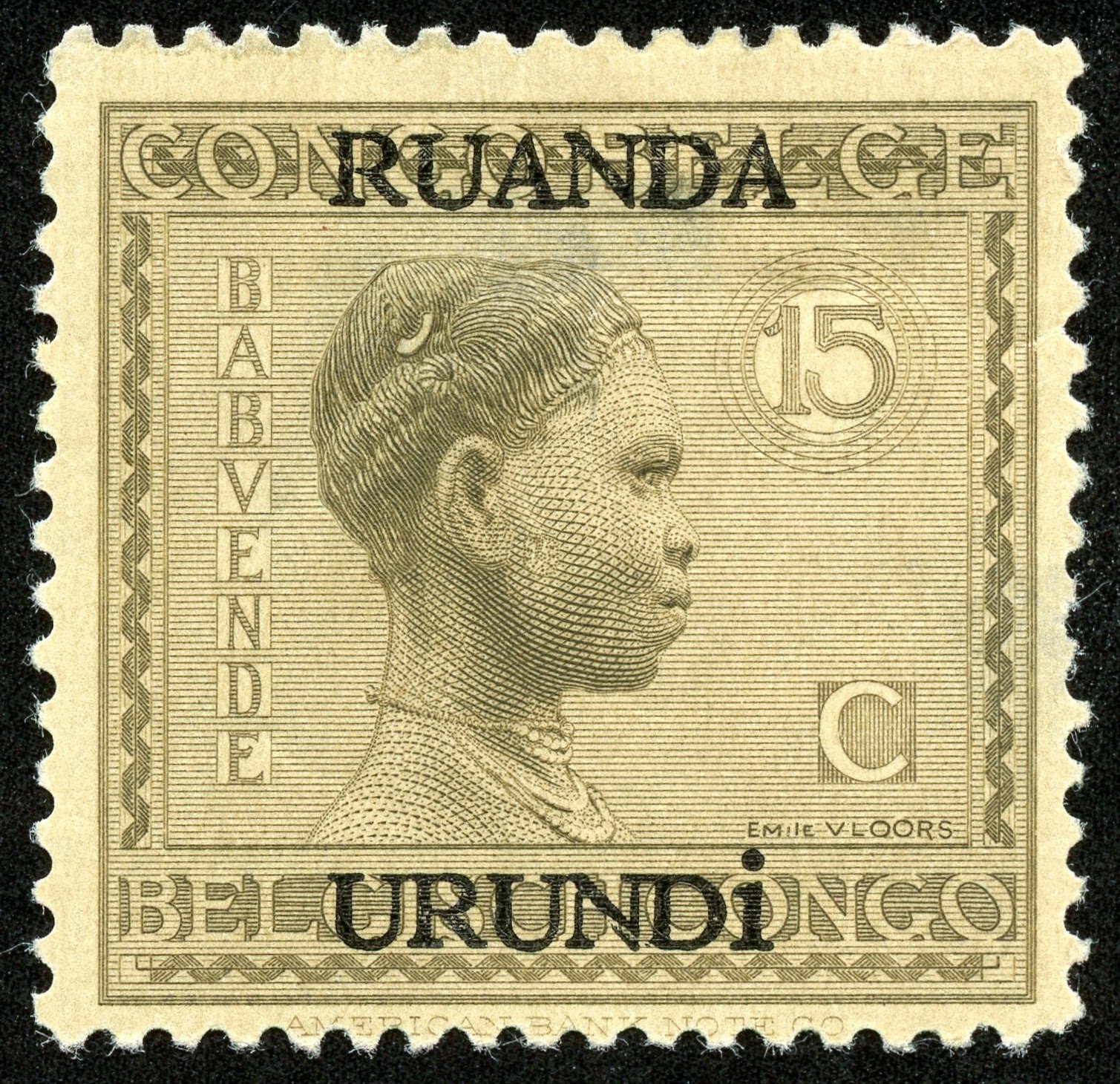 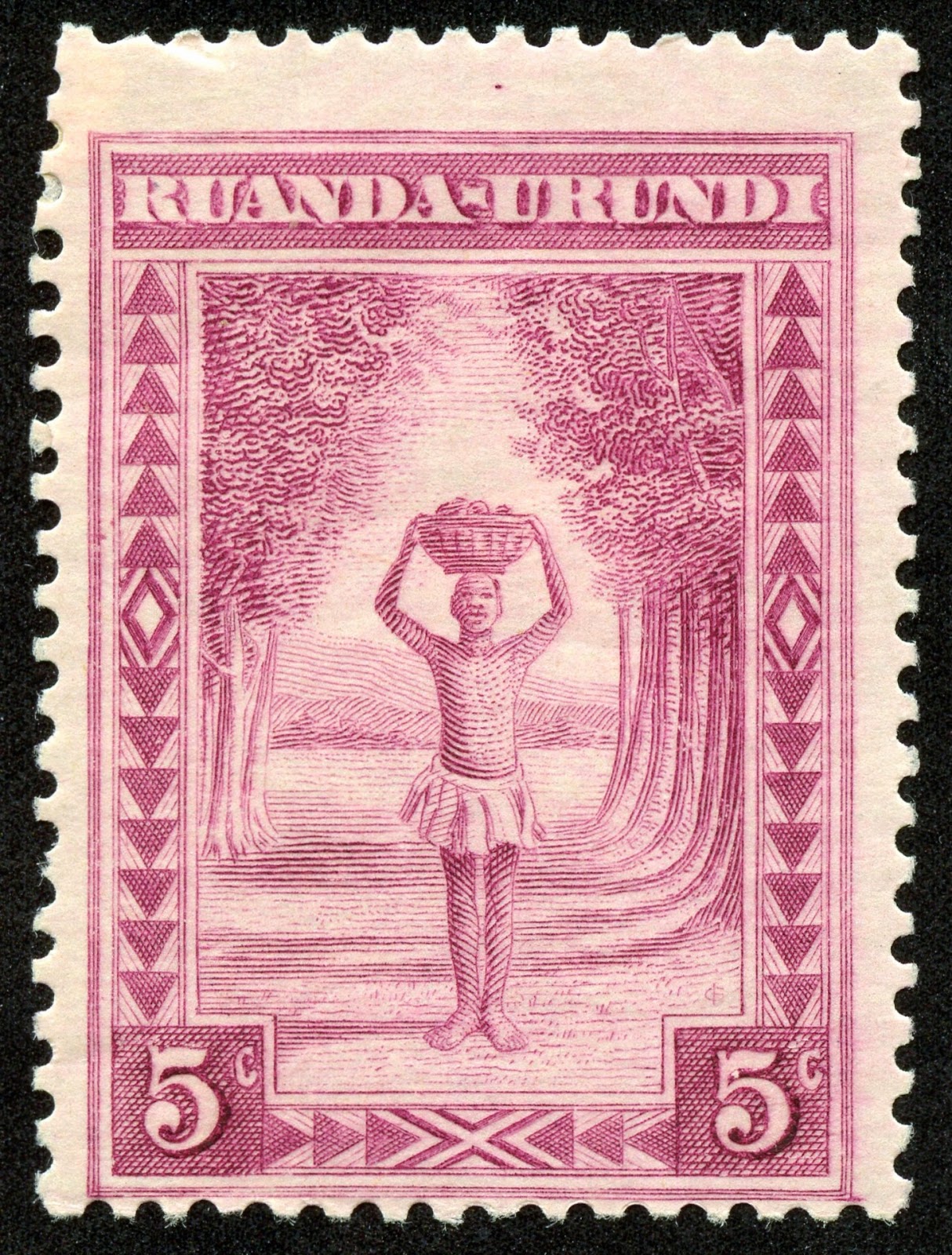 1938 Scott 37 5c deep lilac rose "Porter"
The signature issue ( for me) is the 1931-38 eighteen stamp production featuring native peoples and scenes. These stamps were engraved in Paris. 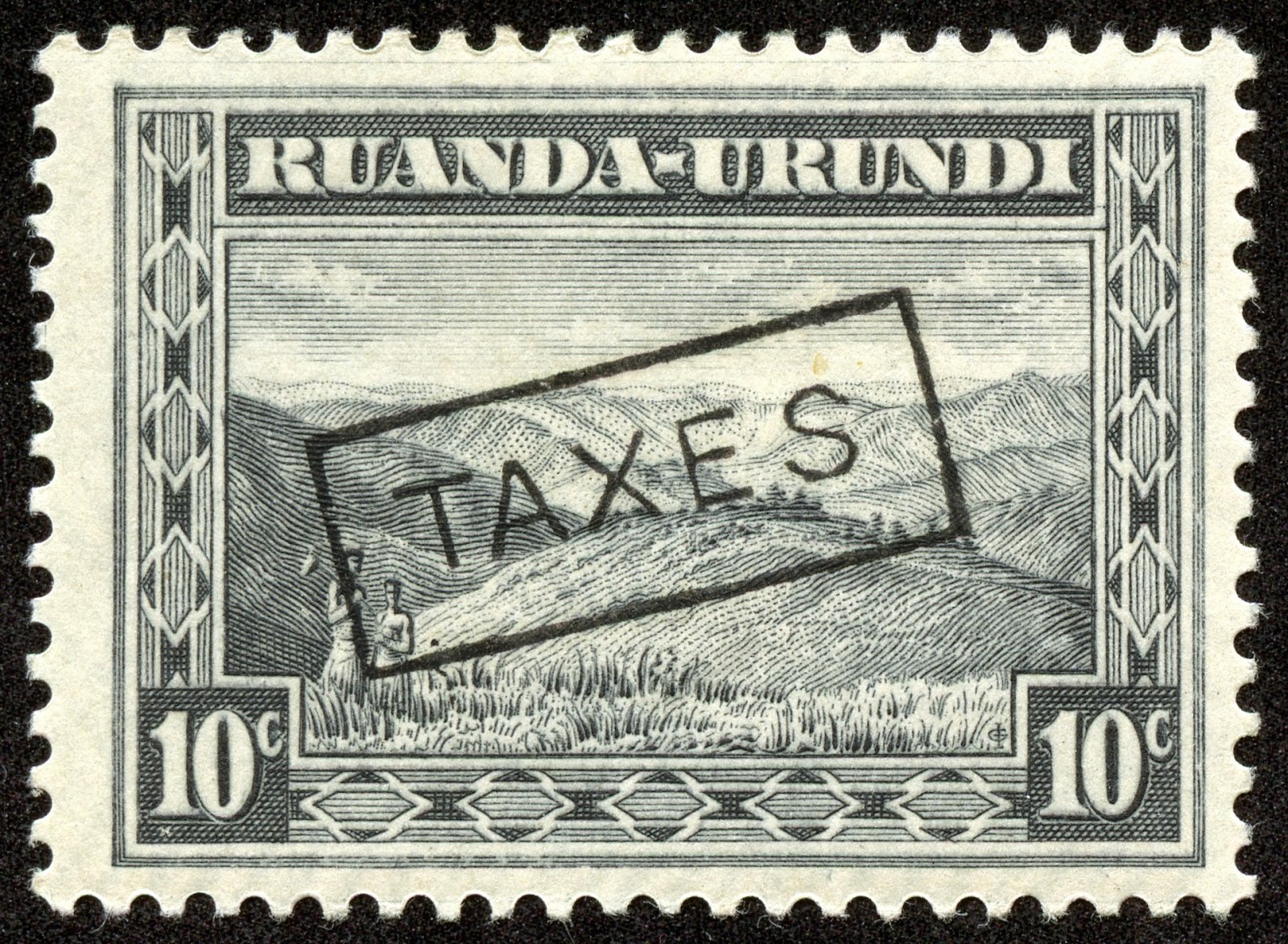 1931 Scott 38 10c gray "Mountain Scene"
I suspect this is a revenue cancellation. 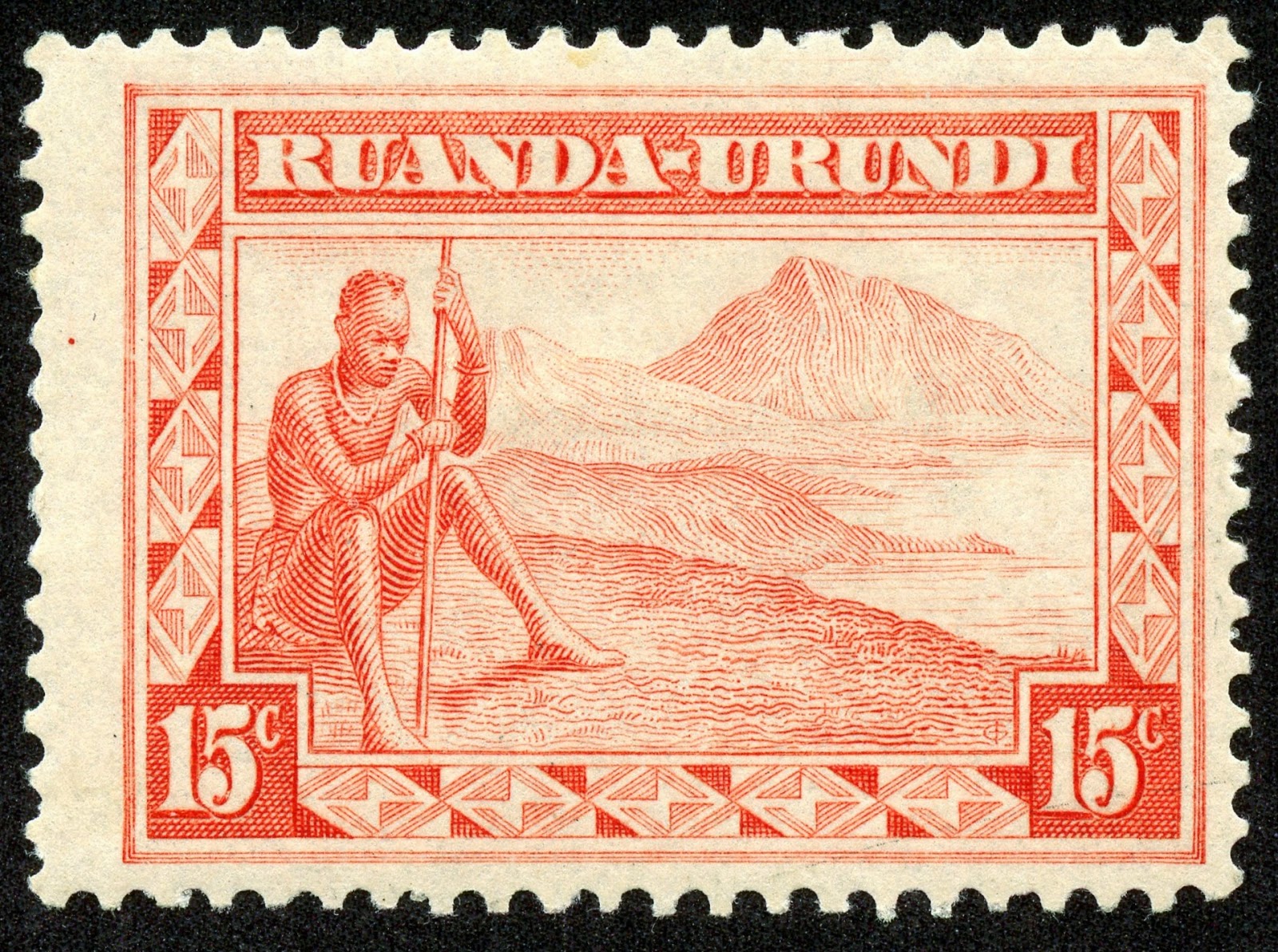 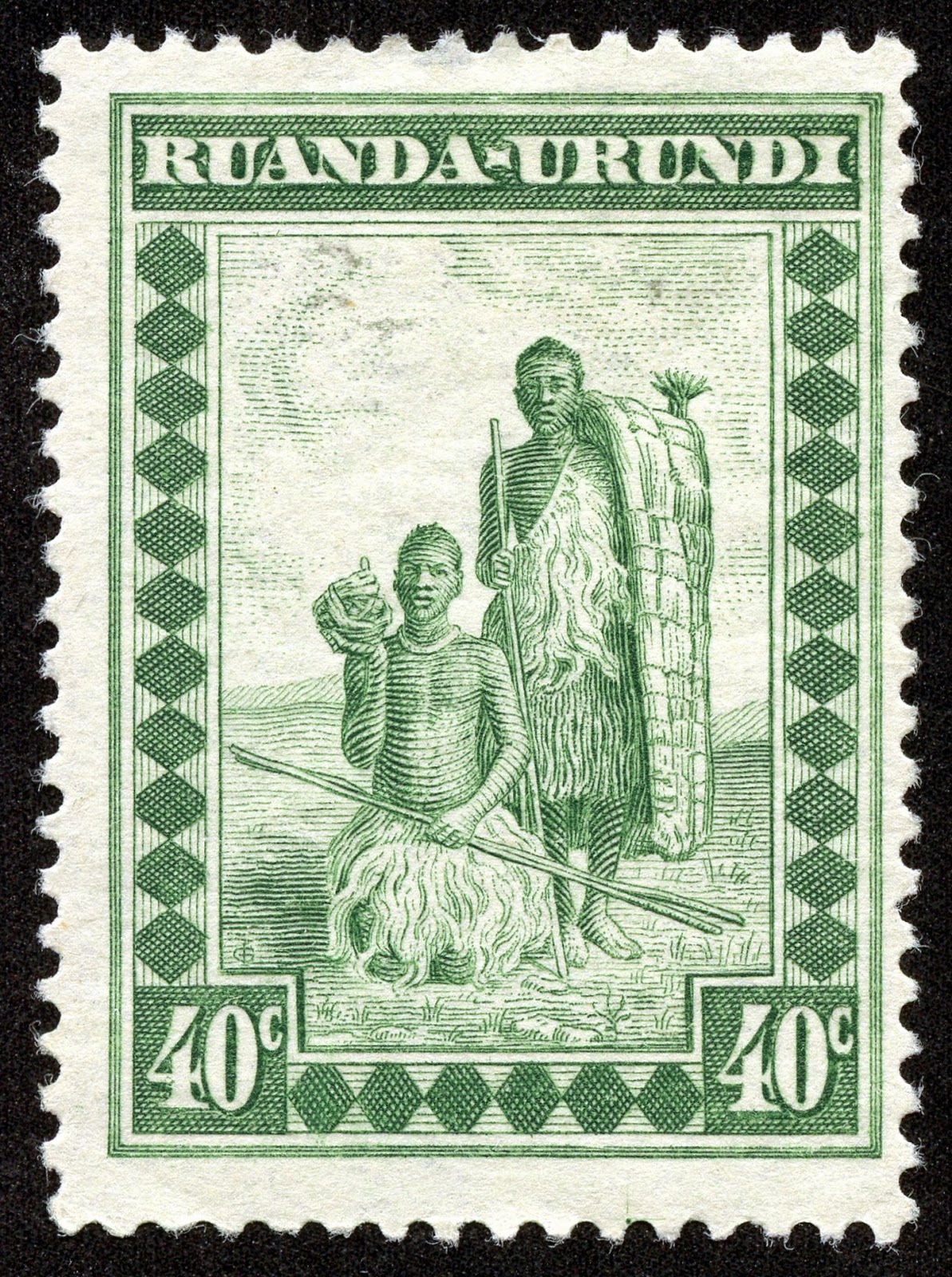 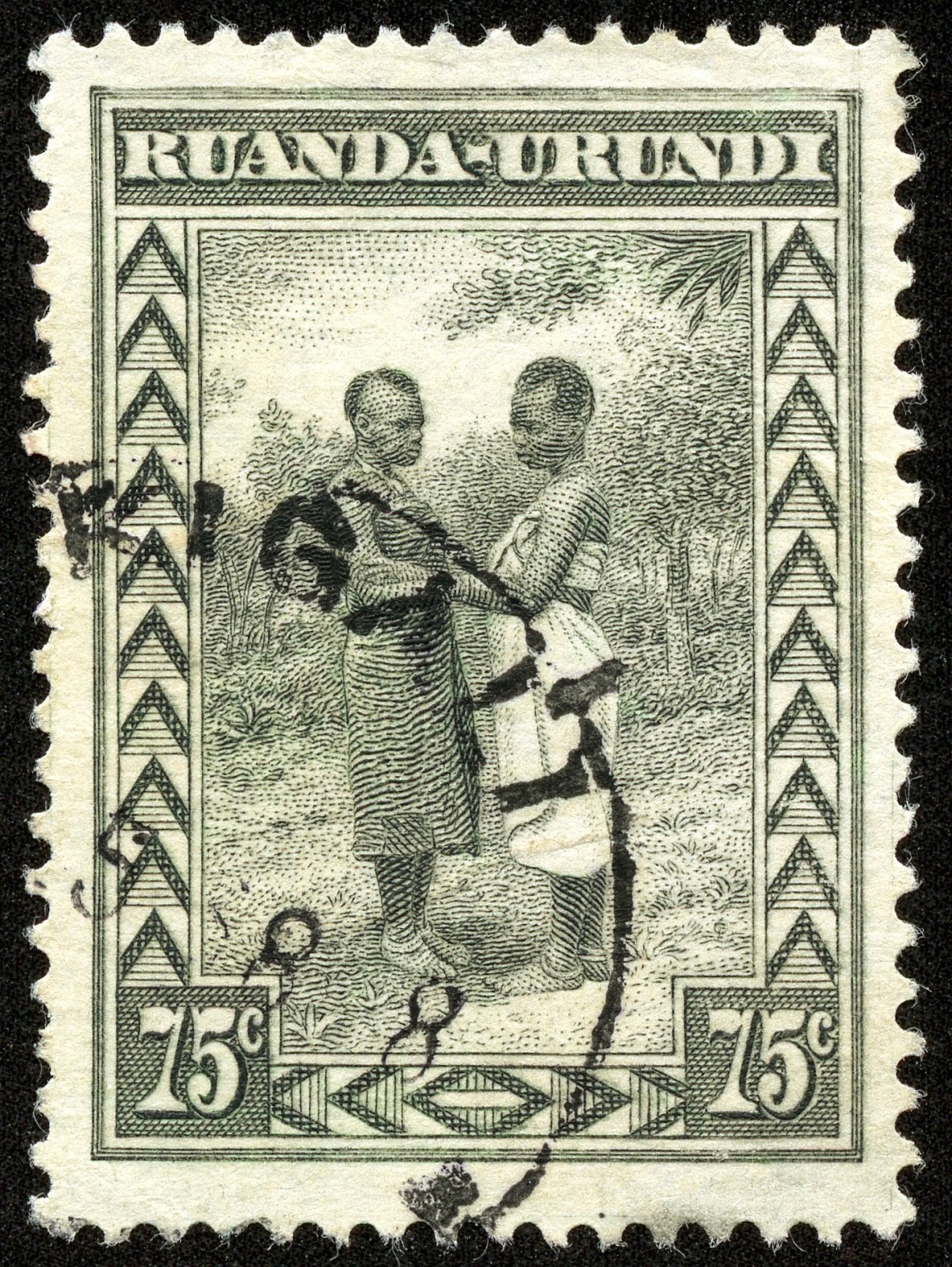 1931 Scott 44 75c gray black "Bahutu Greeting"
Names on stamps for native peoples is not always clear, but the general language spoken is part of the Bantu group. 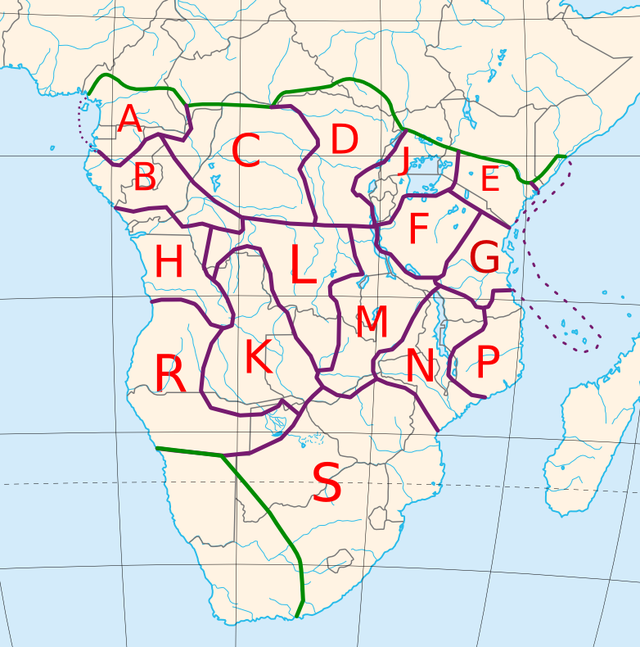 Bantu dialects
There are about 650 Bantu dialect languages. The larger language groups include the Luba (13.5 million), the Zulu (10 million), and the Kikuyu (6 million). The lingua franca today for 140 million people is Swahili. 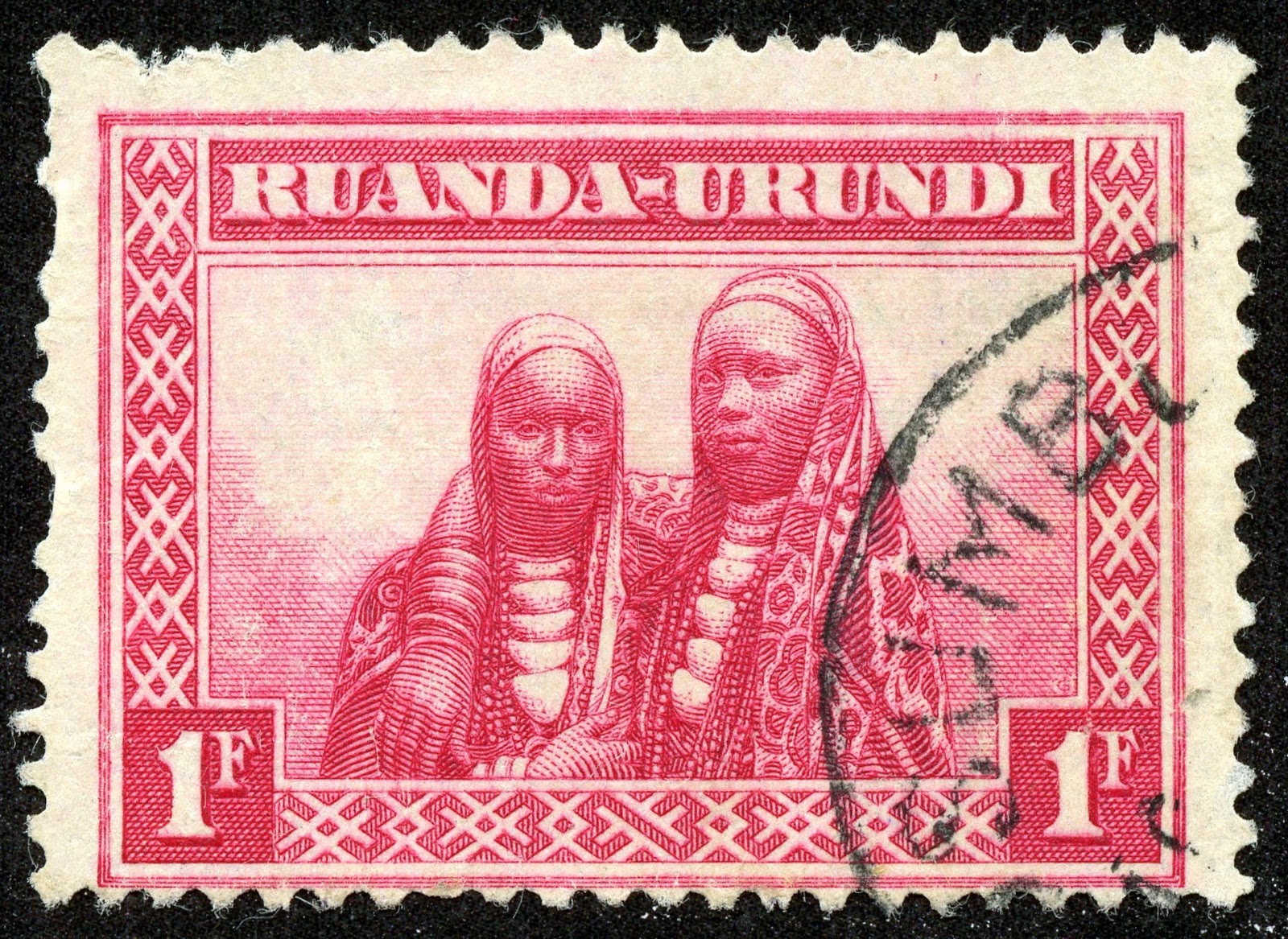 1931 Scott 45 1fr rose red "Barundi Women"
The Burundi area was an indigenous kingdom for 200 years prior to the arrival of the German colonists. It was inhabited by the Twa, Hutu, and Tutsi peoples. During the Belgium hegemony of Ruanda-Urundi, the Tutsi were favored over the Hutu, which contributed to later political turmoil. 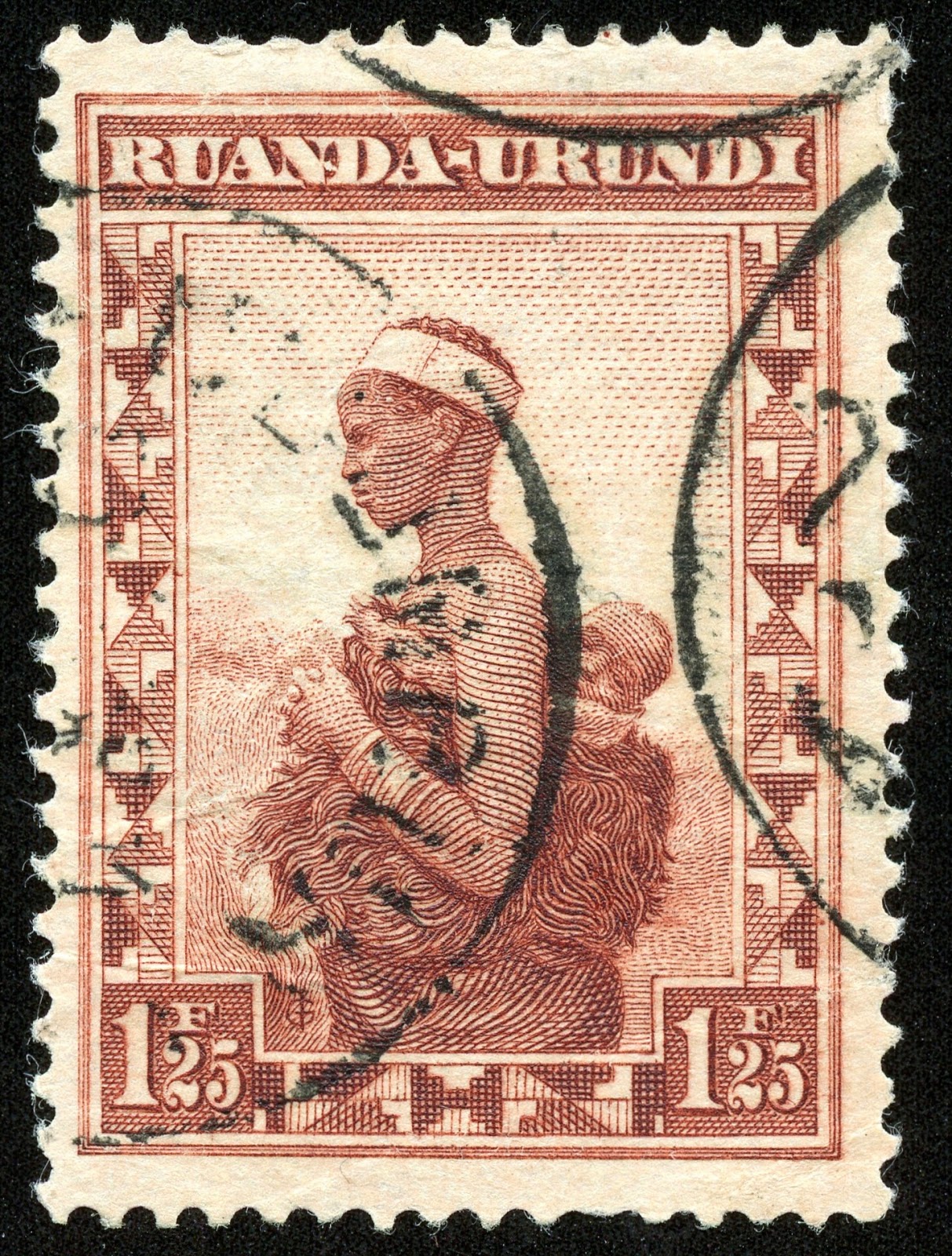 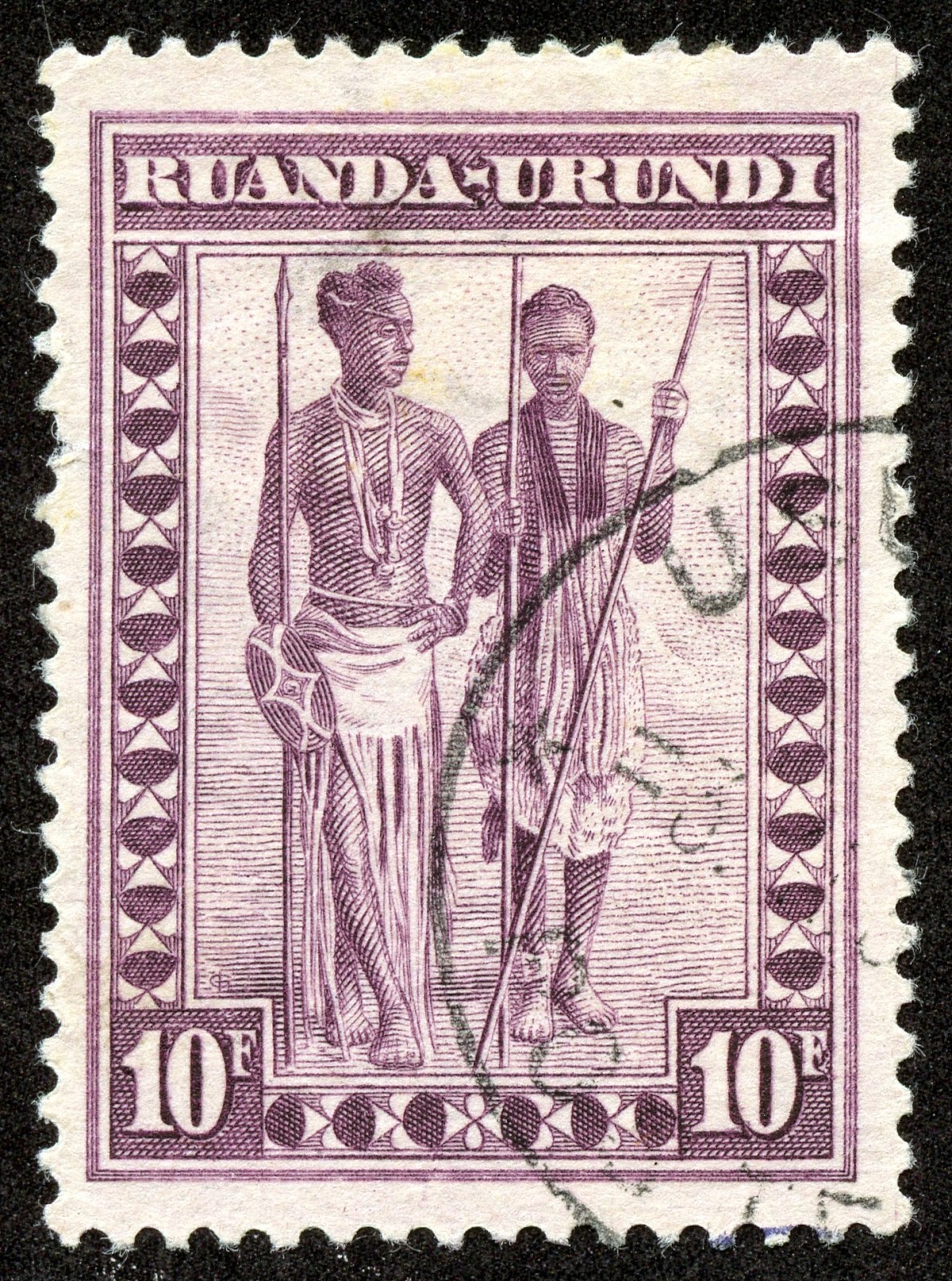 1831 Scott 53 10fr brown violet "Watusi Warriors"
The Tutsi or "Watusi" warriors were quite impressive to the Europeans. Glenn Kittler, who wrote popular books about Africa, opines....

" For the most colorful and exciting dancing, you must go to Ruanda-Urundi... east of the Congo. Here the ruling tribe is the Watusi, the tallest people in the world. It has been said that these giants are born six feet tall, and when you walk among them you can believe it. Men towering seven or eight feet are a common sight. Women gain height by having their heads bound into conical shape in infancy, then training their thick hair to grow straight up to add a few inches. Beholding these lean, dignified, soft-spoken giants is quite overwhelming--and they know it. " 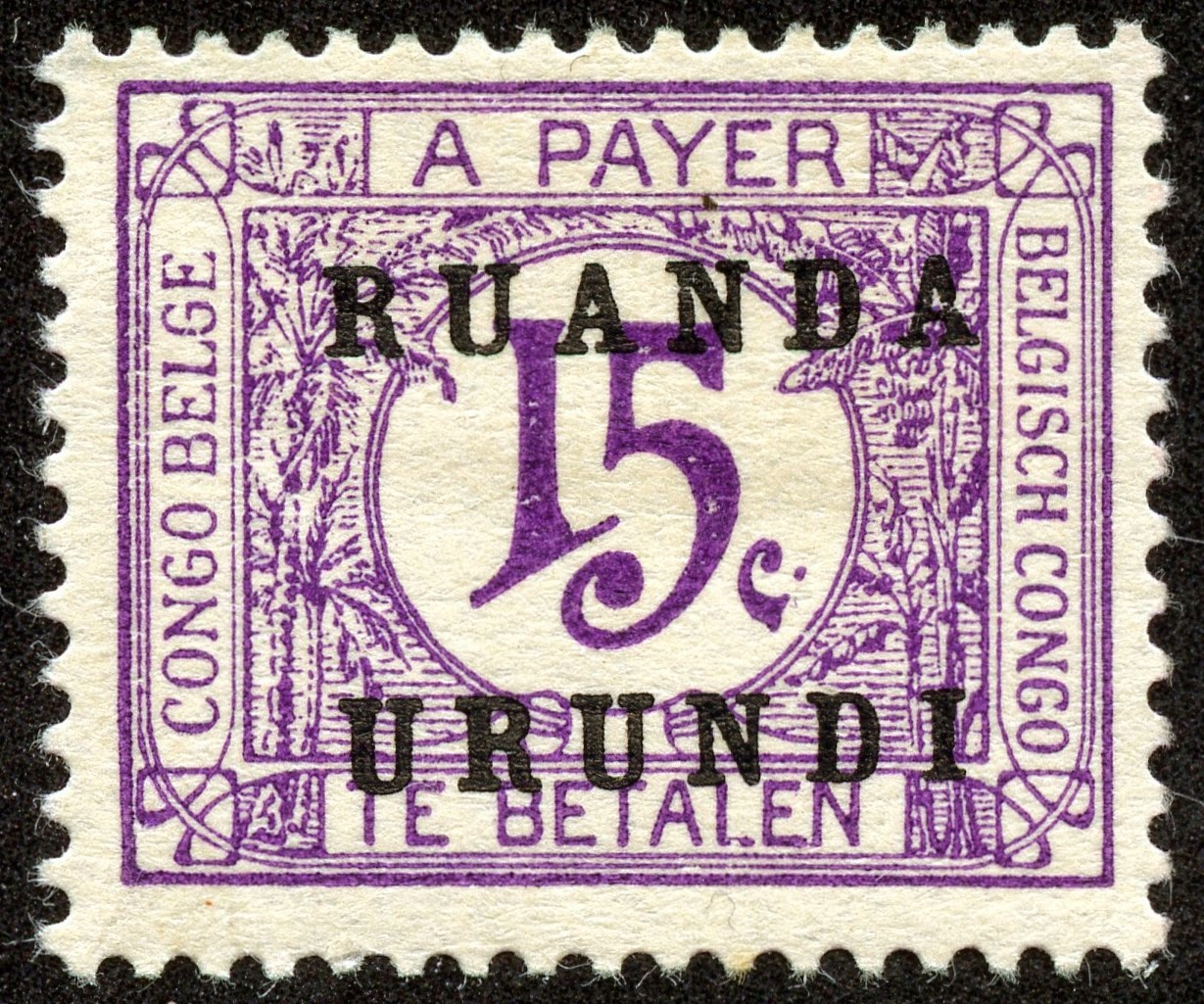 1924 Scott J3 15c violet
Belgian Congo Overprinted
Postage Due stamps, seven in the issue, were produced between 1924-27. They consisted of overprinted Belgian Congo stamps. CV is <$1. 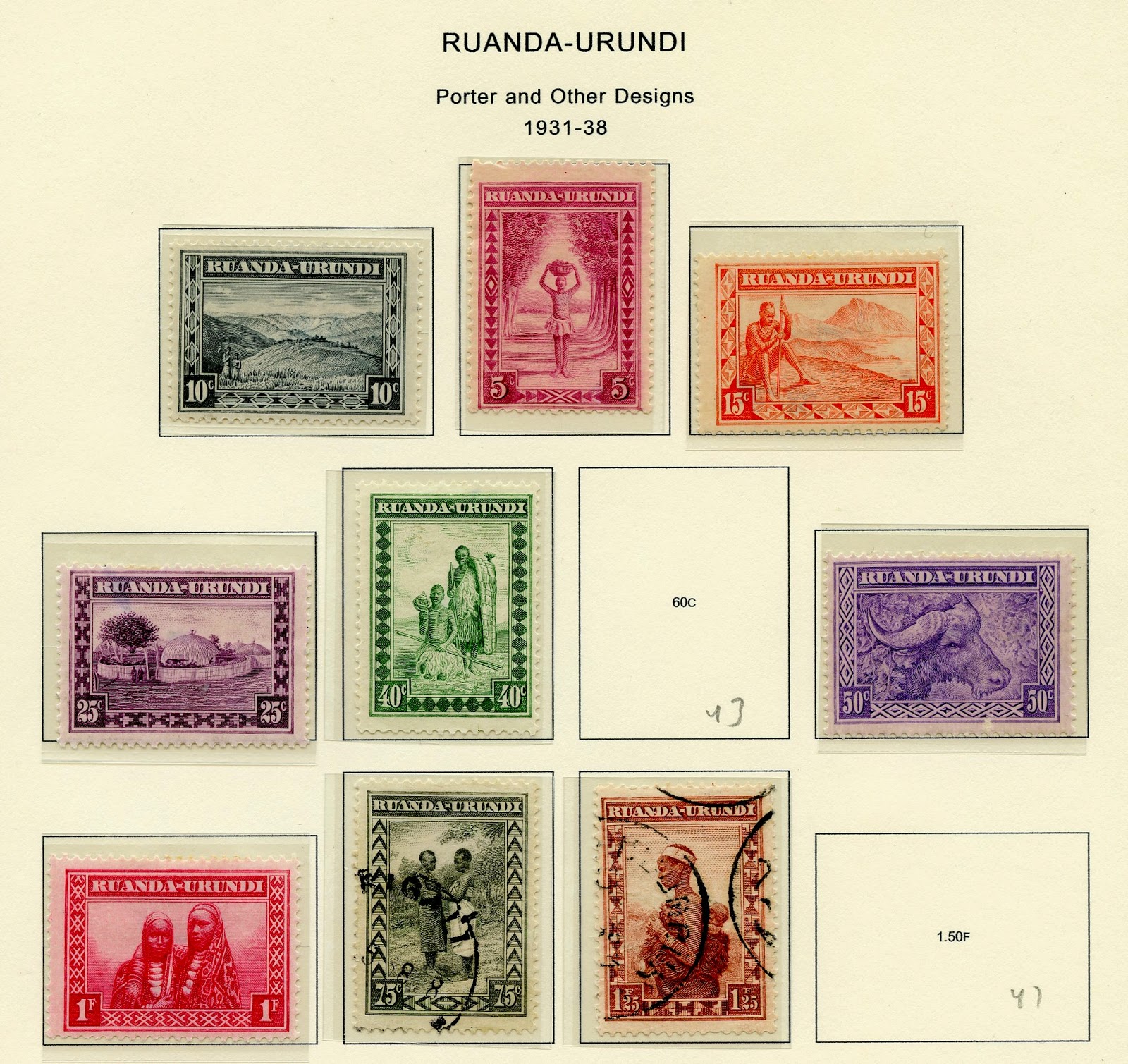 1931-38 Issue in Deep Blue
Deep Blue (Steiner) has seven pages for the stamps of Ruanda-Urundi, and all the  major Scott numbers have a space. 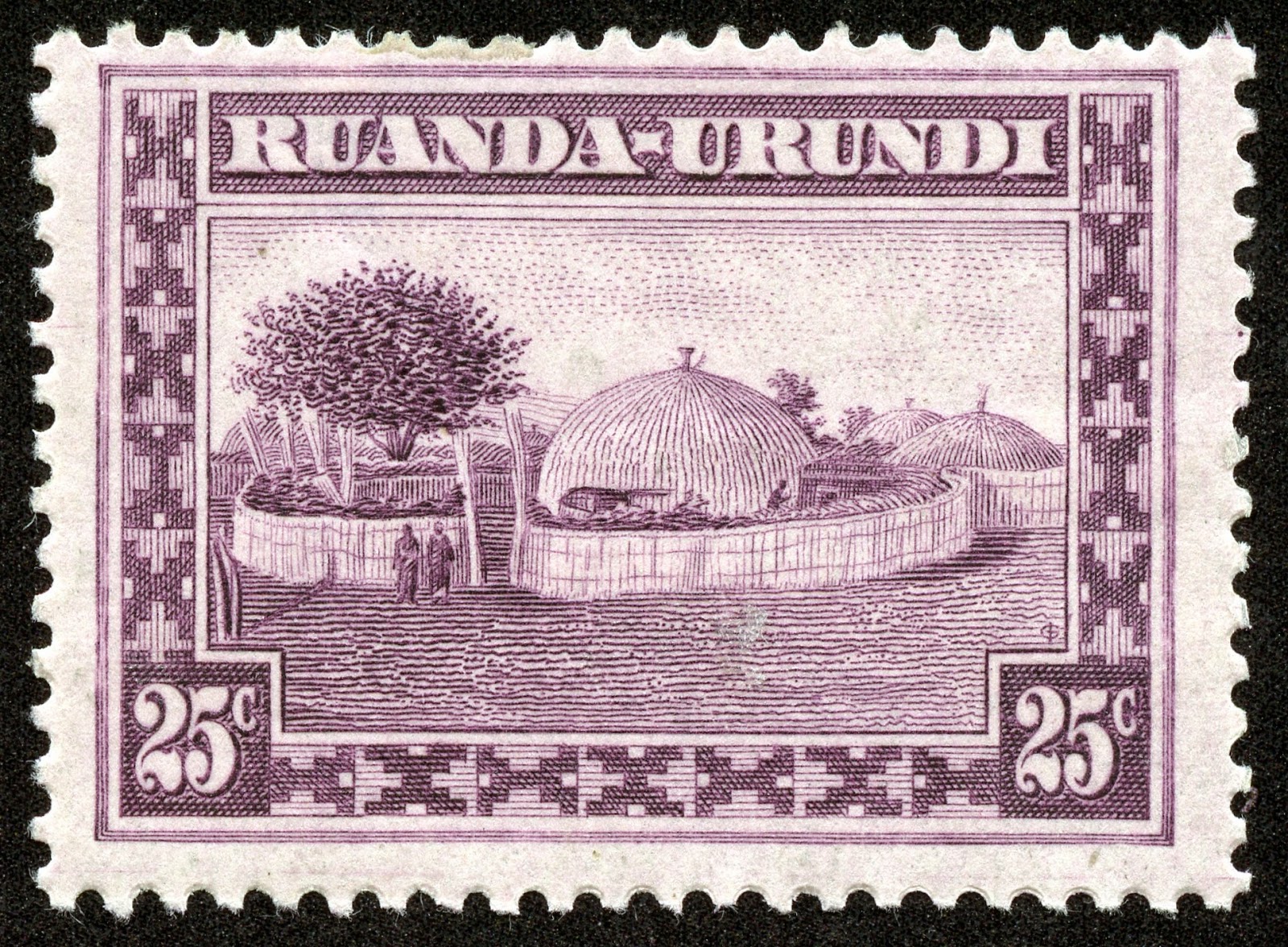 Of interest, the 1940s editions coverage- which is the same- is under "Belgium East Africa", and is located between Bechuanaland Protectorate and Belgium.

Because of the inexpensive nature of Ruanda-Urundi stamps, BB could have added more spaces. I count 26 stamps with CV <$1-$1+ that are not in BB. 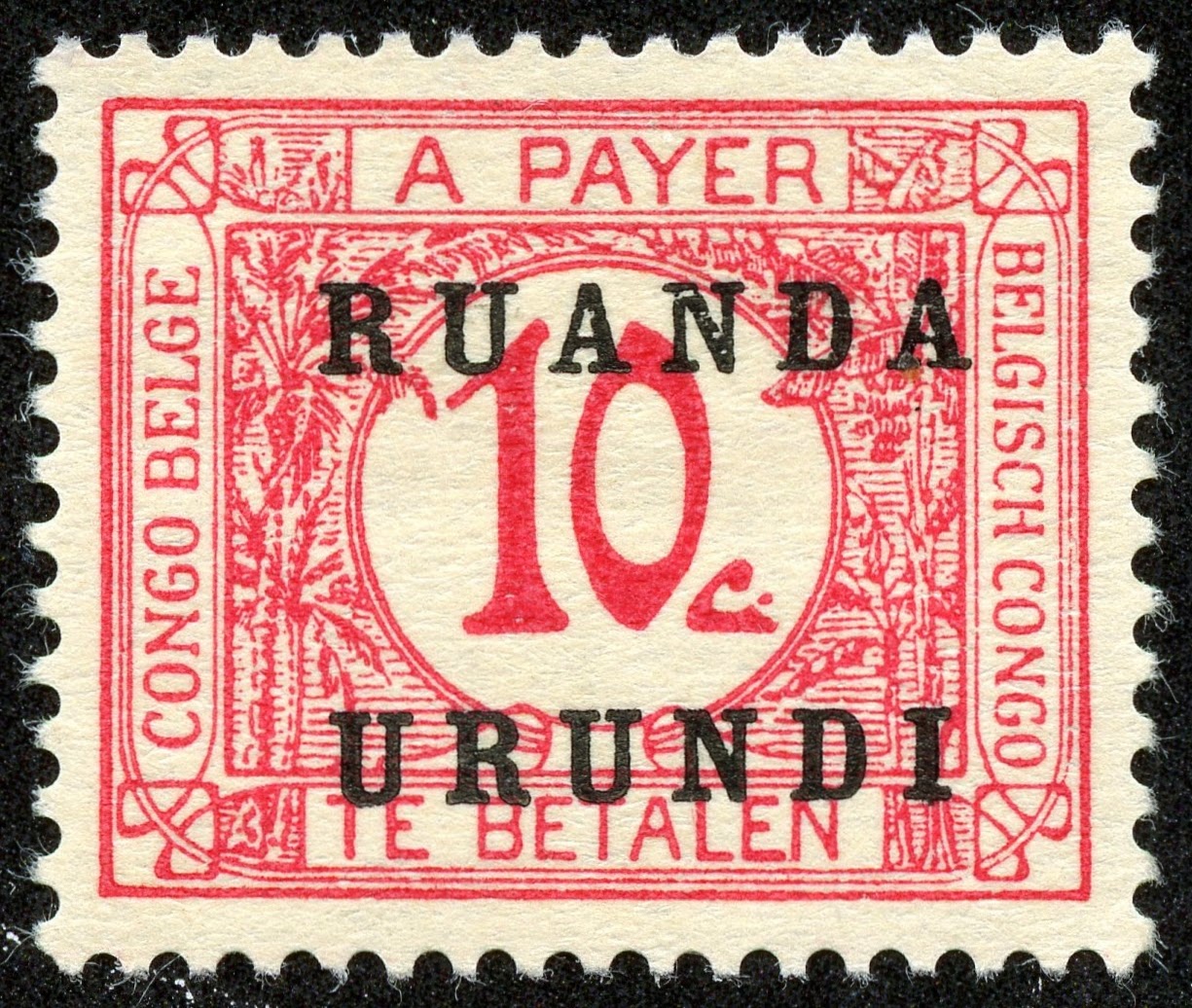 1924 Scott J2 10c deep rose
Out of the Blue
The 1931-38 native peoples and scenes engraved issue is, for me, one of the better issues among all of the WW colonial era output.

Comments appreciated!
Posted by Jim at 11:40 AM