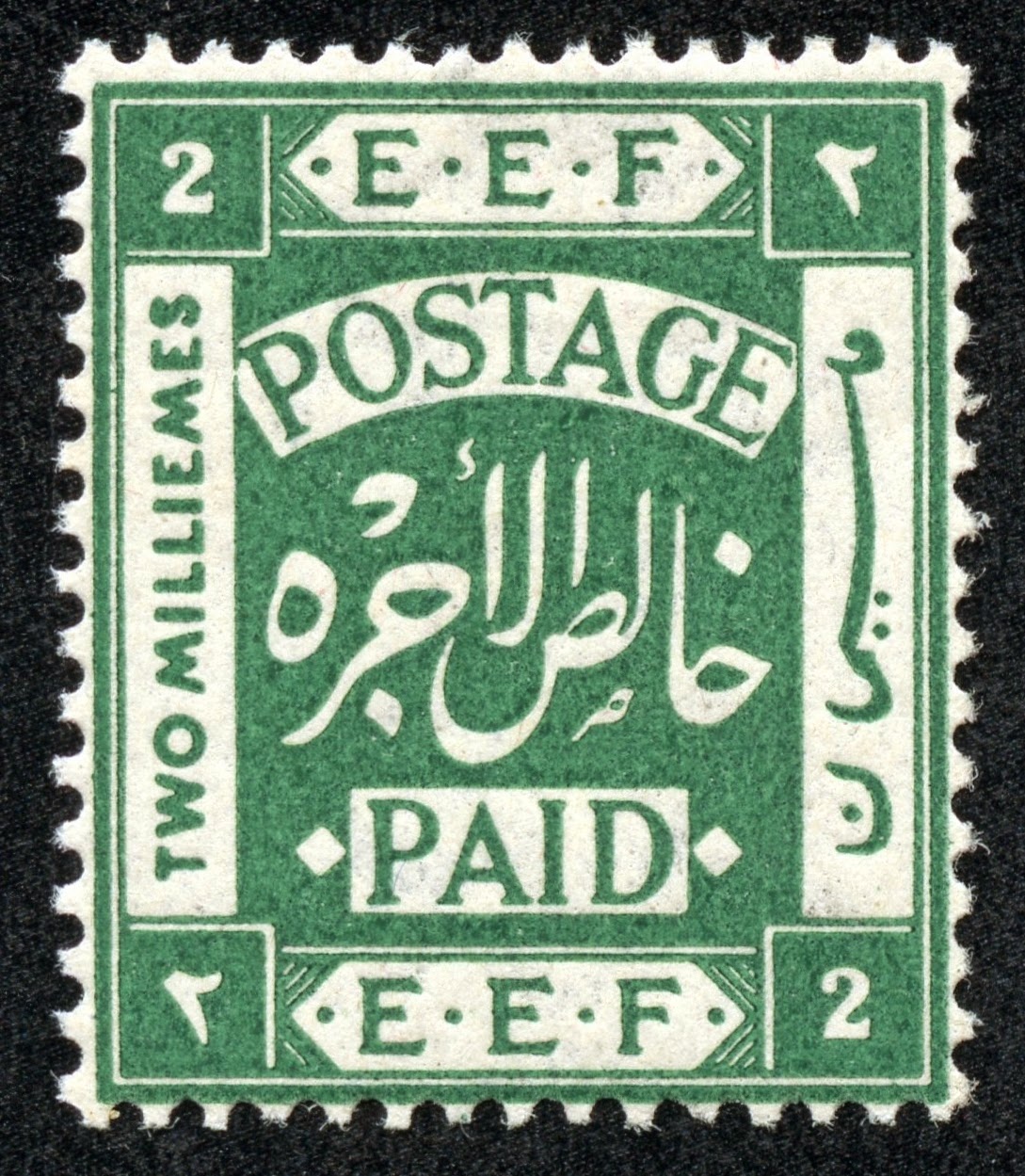 1918 Scott 5 2m blue green
Occupied by "Egyptian Expeditionary Forces" of the British Army
Quick History
Between 1918-20, Palestine ( named after the Palaestina province of the Roman and Byzantine Empire) was occupied by the British Army Egyptian Expeditionary Forces as part of the campaign against the Ottoman Empire, which had sided with Germany during WW I. Stamps were issued February 10, 1918.

Then, following the San Remo conference in April, 1920, Syria and Lebanon came under French Mandate, while Palestine became a British Mandate. This arrangement was approved by the League of Nations in 1922. The British civil Mandate administration continued until 1948.

The British Mandate period marked the significant rise of both Jewish and Arab nationalist movements. This culminated  in the Arab Revolt of 1936-39, the Civil War of 1947-48, and the Arab-Israeli War of 1948.

By 1949, Mandated Palestine was no more. Rather, the territory was split into the State of Israel with a Jewish majority, the West Bank (annexed by the Kingdom of Jordan), and the Gaza Strip ( Arab All-Palestine Government), under Egypt military occupation.

(For a more fleshed out history of Jordan and it's stamps, review my Jordan blog post.) 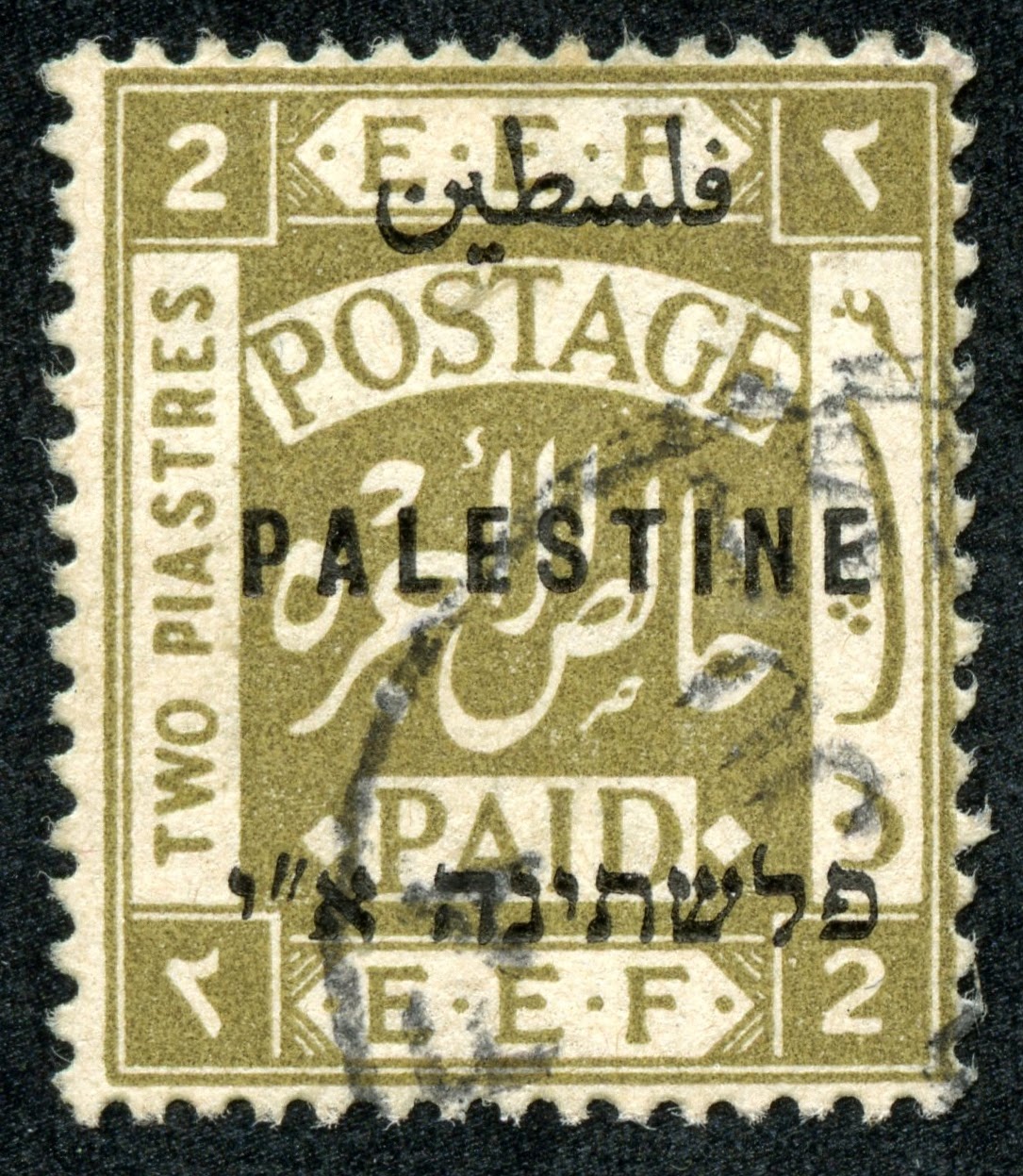 In addition, there are 22 minor number stamps with overprint variations. 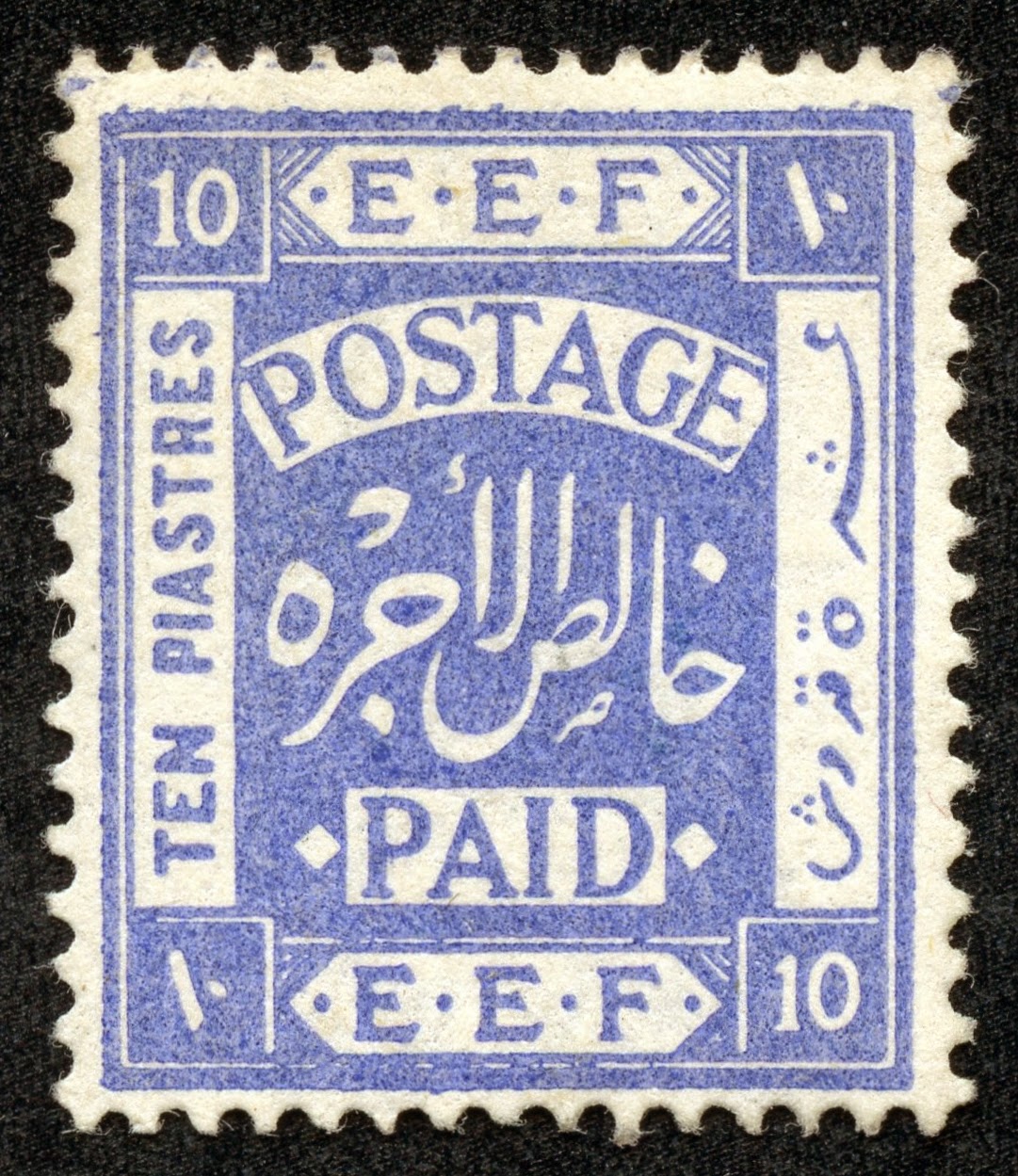 1918 Scott 13 10pi ultramarine
Issued under British Military Occupation
A rouletted two stamp issue and a perforated eleven stamp issue was produced in 1918 under British Military Occupation, as shown. The stamps were for the territories of Palestine, Transjordan, Lebanon, Syria, and in parts of Cilicia and northeastern Egypt. The stamp has English, Arabic, and Hebrew script.

"EEF" are the initials for "Egyptian Expeditionary Forces".

If you have overprints for these design stamps that are not shown on this blog post, check the Jordan post, as many overprints of these stamps were issued there. 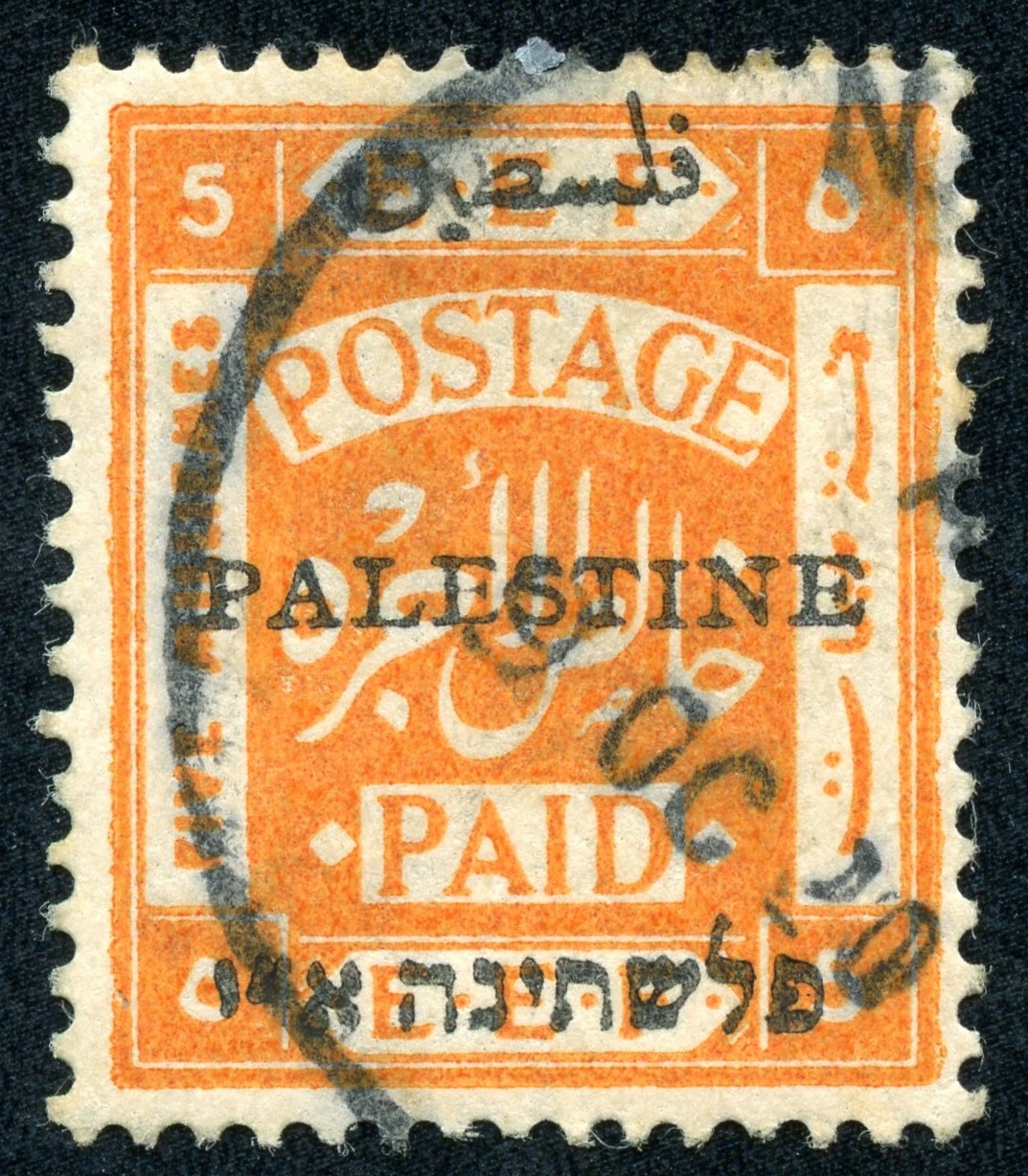 1920 Scott 19 5m orange
Stamps and Type of 1918 Overprinted in Black or Silver
Arabic Overprint 8mm long
An eleven stamp issue, overprinted in Jerusalem, was produced on September 1, 1920. This was at the beginning of the "British Mandate", although the affirmative vote by the League of Nations did not occur until 1922.

One has to pay careful attention to the overprint, as it has (subtle) changes in subsequent issues.

Here, the Arabic overprint script is 8mm long, and the "Palestine" English script is different than the 1921-22 (London printing) issues. 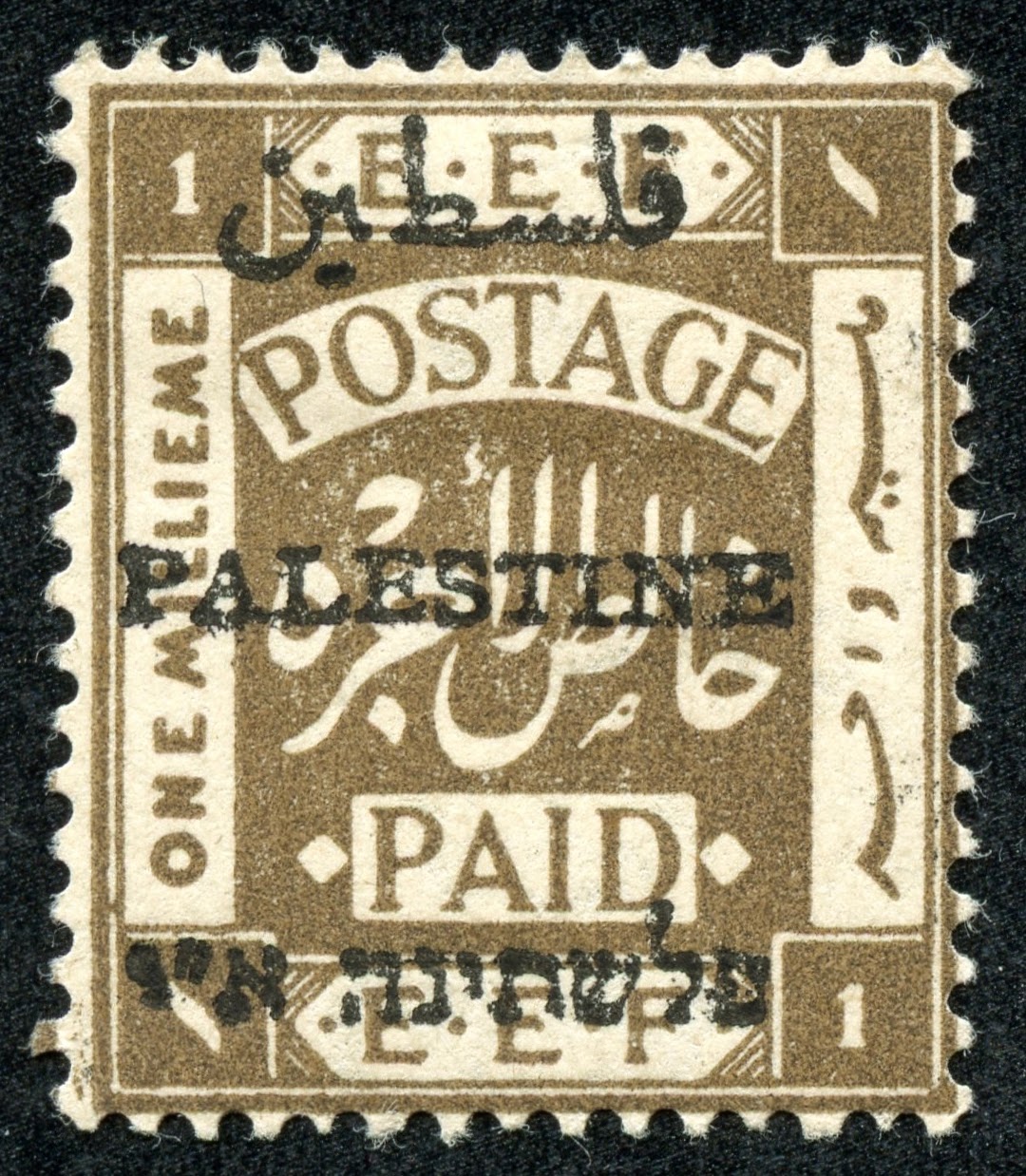 1920 Scott 15a 1m dark brown
Arabic Overprint 10 mm long
There is also a 1920-21 eight stamp issue where the Arabic overprint is 10 mm long. These are given minor numbers in Scott (although they have their own listing). Other catalogues treat these as major numbers, and you should too, ;-)

Other (minor number) variations have shorter spaces between the English and Hebrew lines. Consult Scott for details - or better, the Stanley Gibbons Commonwealth & British Empire Stamps 1840-1970 catalogue, which illustrates all the overprints. 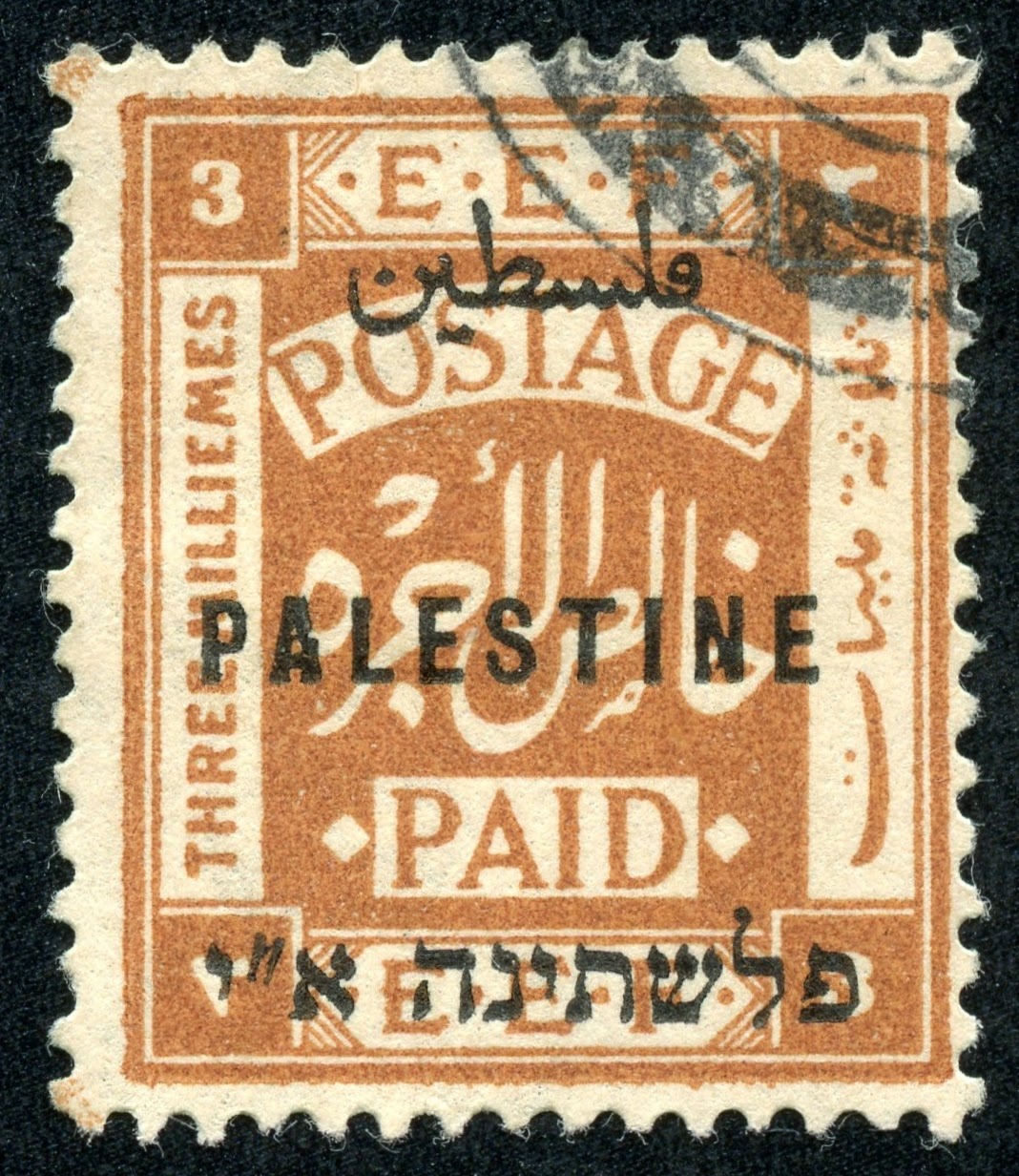 1921 Scott 39 3m light brown
Stamps of 1918 Overprinted
In 1921, an eleven  stamp issue, overprinted in London, was released. Note the different "Palestine" script from the previous Jerusalem overprinted issue. The perforation is 15 X 14, and the watermark is Wmk 33 " Crown & GvR". 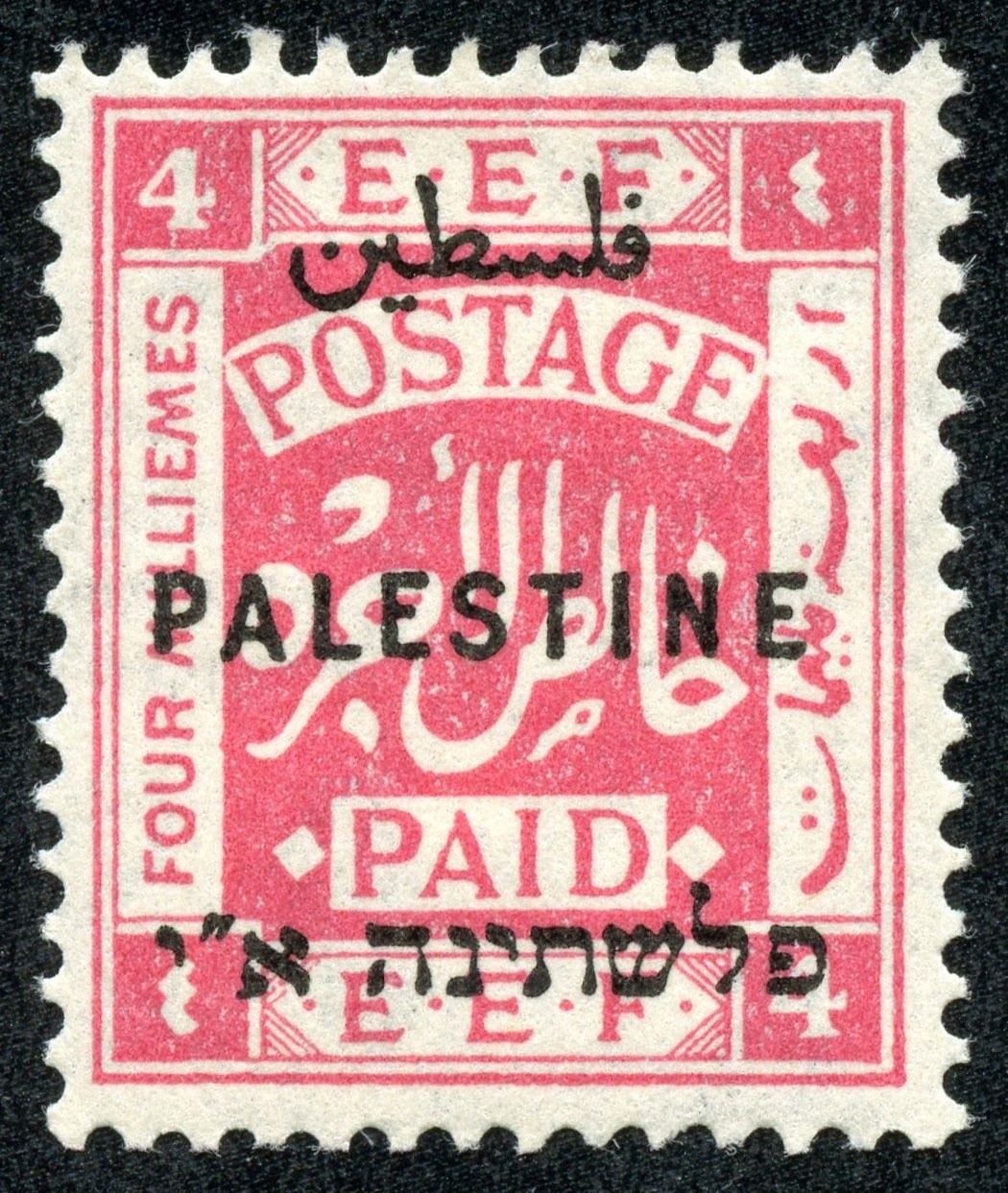 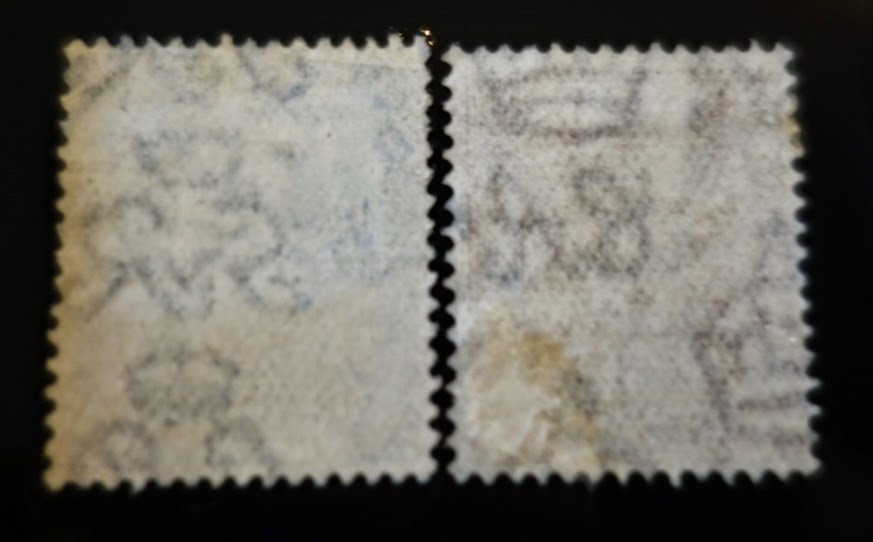 Left: "Crown and GvR"
Right: "Multiple Crown and Script C A"
If in doubt, check the watermark. 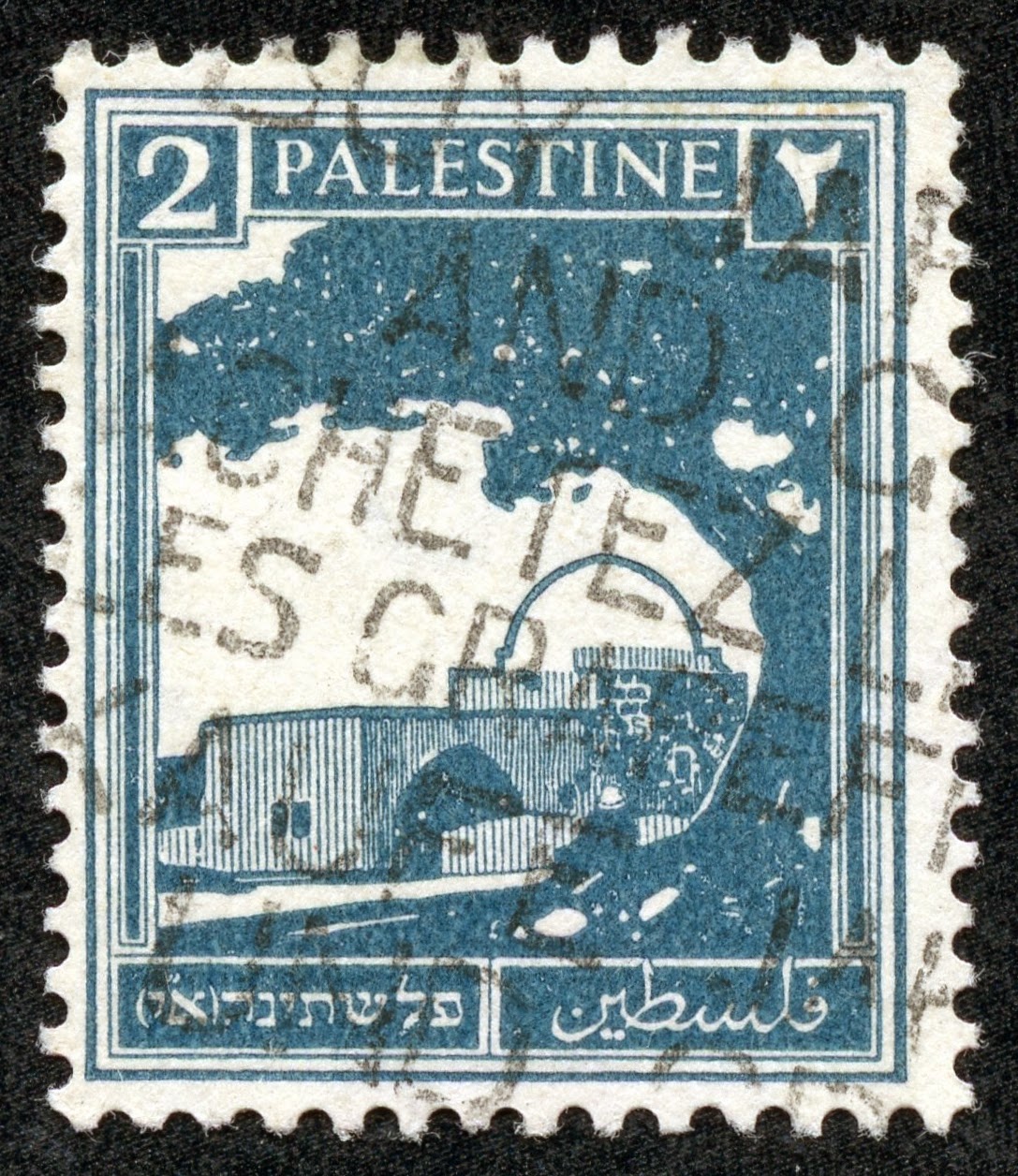 Rachel's tomb (reputed) is within a Muslim cemetery, and is located on the edge of Bethlehem in the West Bank. Rachel, wife of Jacob, and mother of Benjamin, is revered, especially in the Jewish tradition. Rachel's Tomb, Circa 1880
Rachel's tomb has been the site of Muslim/ Jewish cooperation and conflict, depending on the era. 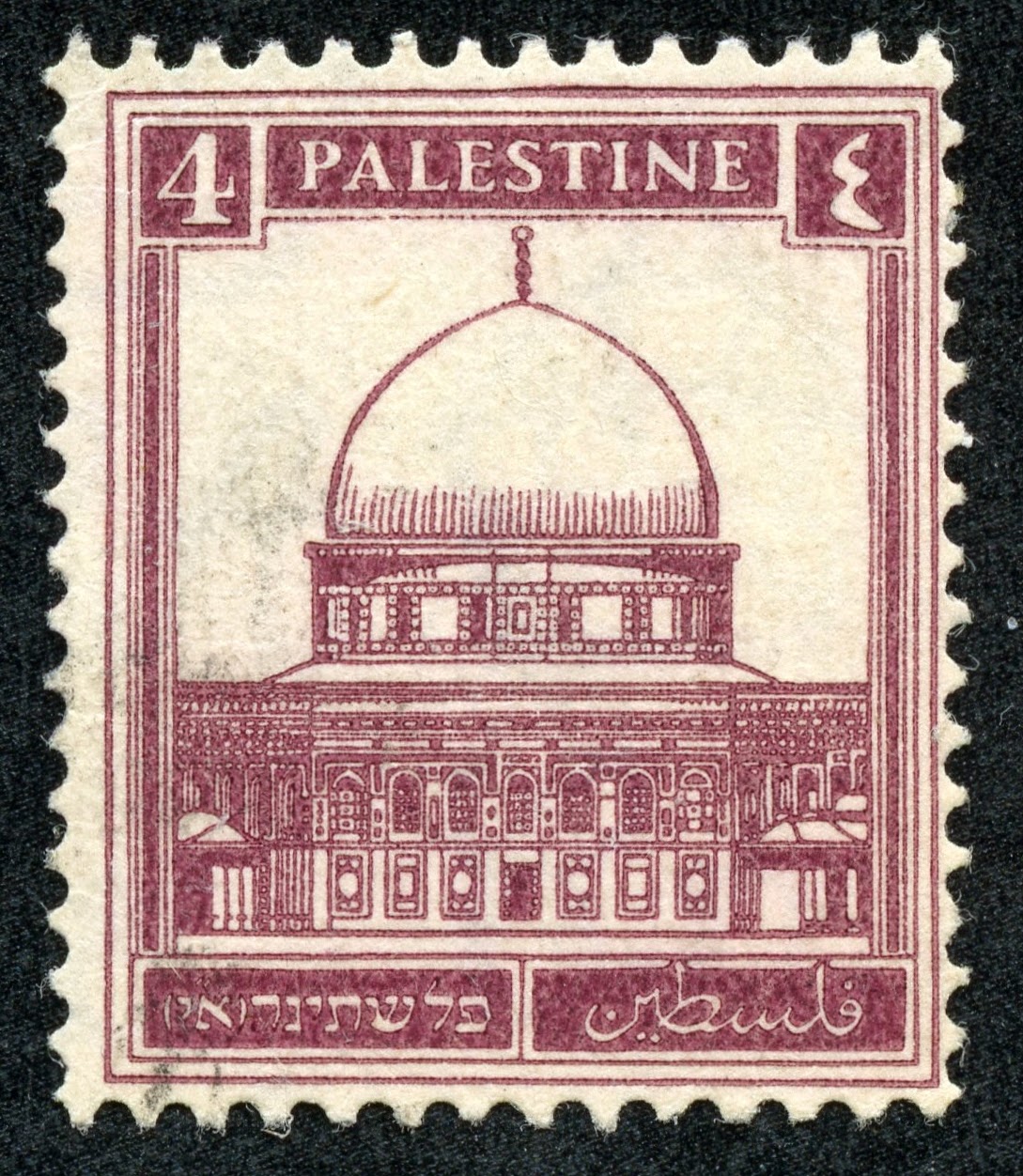 The Dome of the Rock is located on the Temple Mount in the Old City of Jerusalem. It was completed in 691. The Foundation Stone, on which it is built, holds great significance for Muslims, Jews, and Christians. It was constructed on the Second Jewish Temple site, which was destroyed by the Roman army in year 70.

Muslims believe this is the site of the Islamic miracle of the Isra and Miraj.

Non-Muslims are generally not allowed inside ( there are exceptions). When I visited Jerusalem in 2008, the outside Dome of the Rock was magnificent indeed. 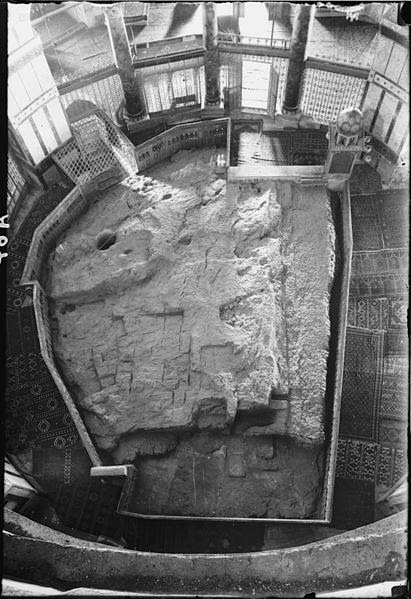 Foundation Stone in the floor of the Dome of the Rock
Jews believe the Foundation Stone was the location of the Holy of Holies in the Temple, and view it as the epicenter (junction) of Heaven and Earth. ( According to Jewish tradition, the stone is the site where Abraham was preparing to sacrifice his son, Isaac. Muslims believe it was Ishmael that was to be sacrificed.) As Jewish prayer is not allowed on the Temple Mount by Muslim authorities, the closest place to pray while facing the Foundation Stone is near the Western Wall.

The Western Wall and the Dome of the Rock
At the foot of the western side of the Temple Mount is the Western Wall or Wailing Wall.  It is composed of an ancient wall remnant  that surrounded  the old Jewish Temple's courtyard.  It is a continual site for Jewish prayer and pilgrimage. When I was there, it did indeed  feel like a profound place. 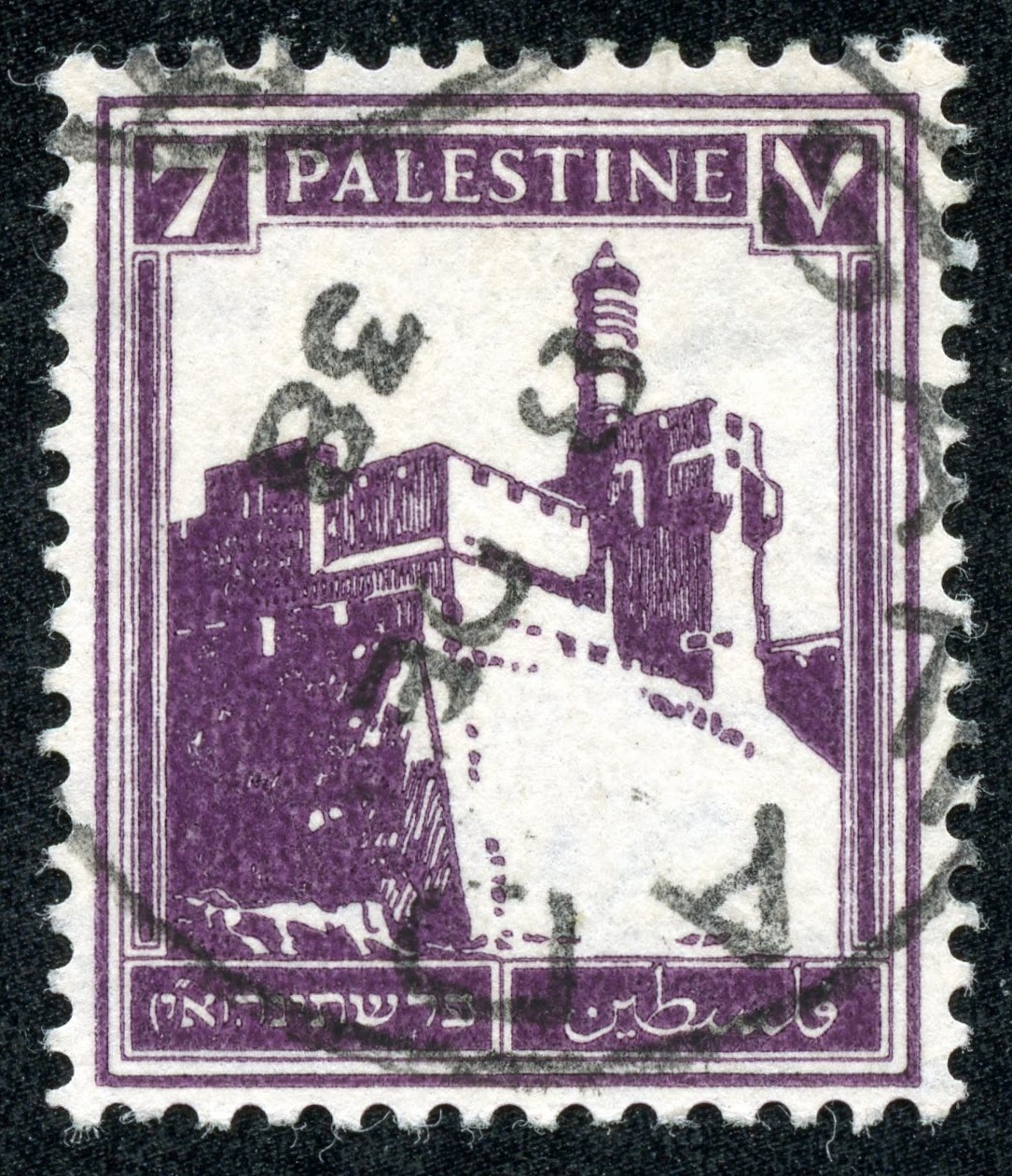 This ancient citadel ("Tower of David") is located near the Jaffa Gate entrance to the Old City of Jerusalem. It has origins back to the 2nd century BC. It now houses a Museum of the History of Jerusalem. 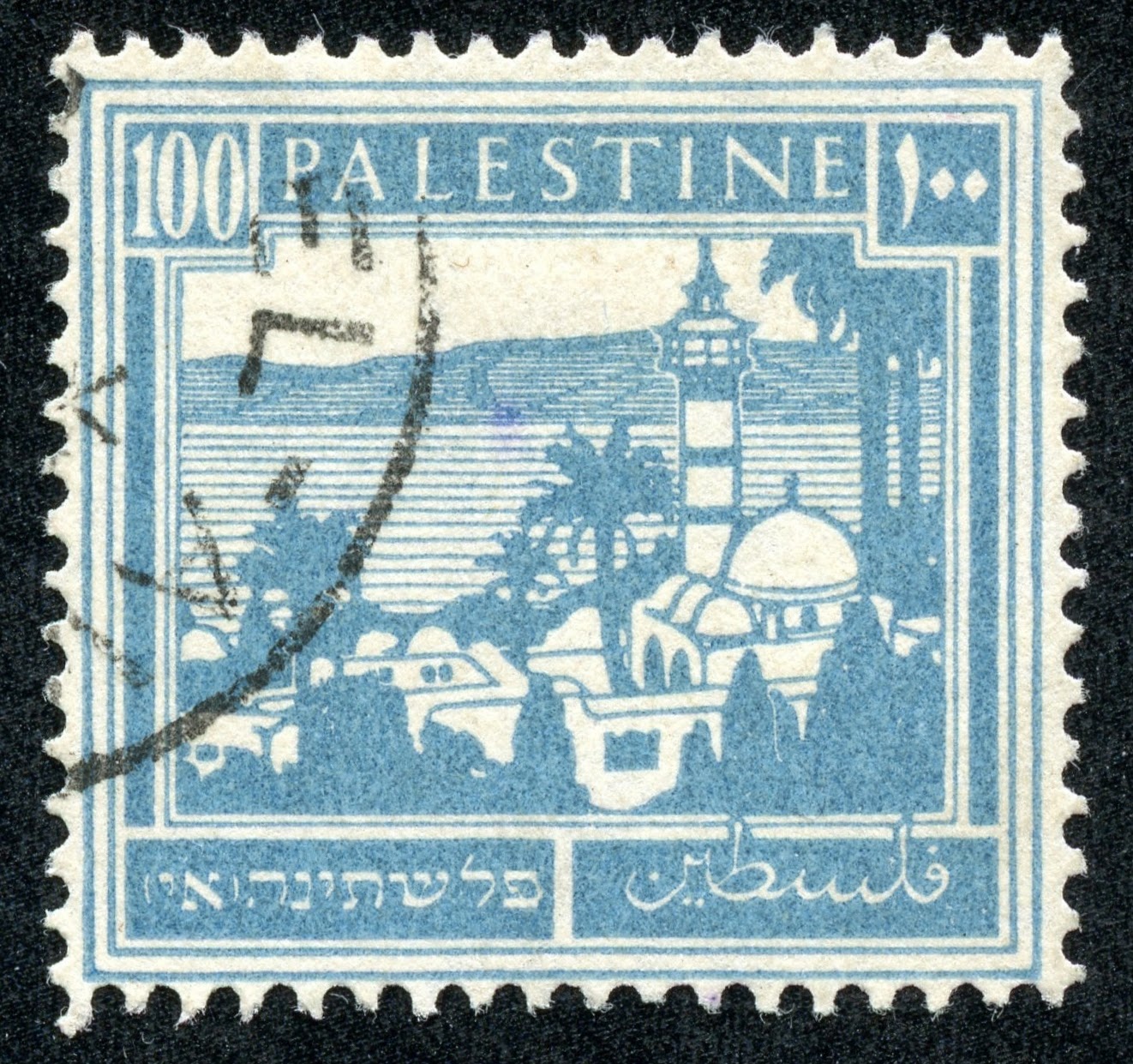 1927 Scott 80 100m bright blue
"Tiberias and Sea of Galilee"
Tiberias, on the shores of the Sea of Galilee, appears as magnificent as the stamp image portrays,- on my recollection. 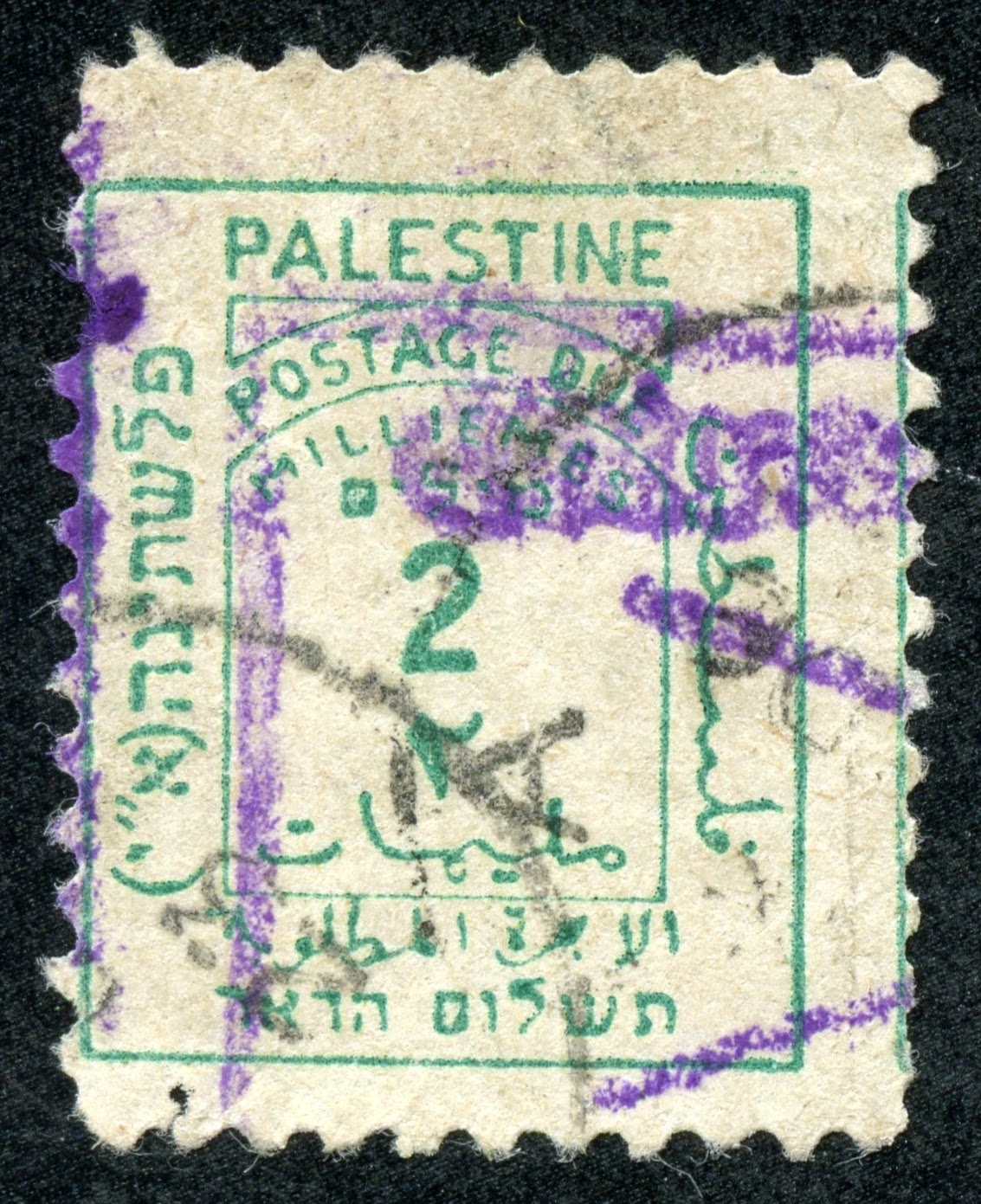 1923 Scott J2 2m green
Postage Due
The five stamp 1923 postage due issue is rather functional in appearance, as this somewhat overused specimen demonstrates. 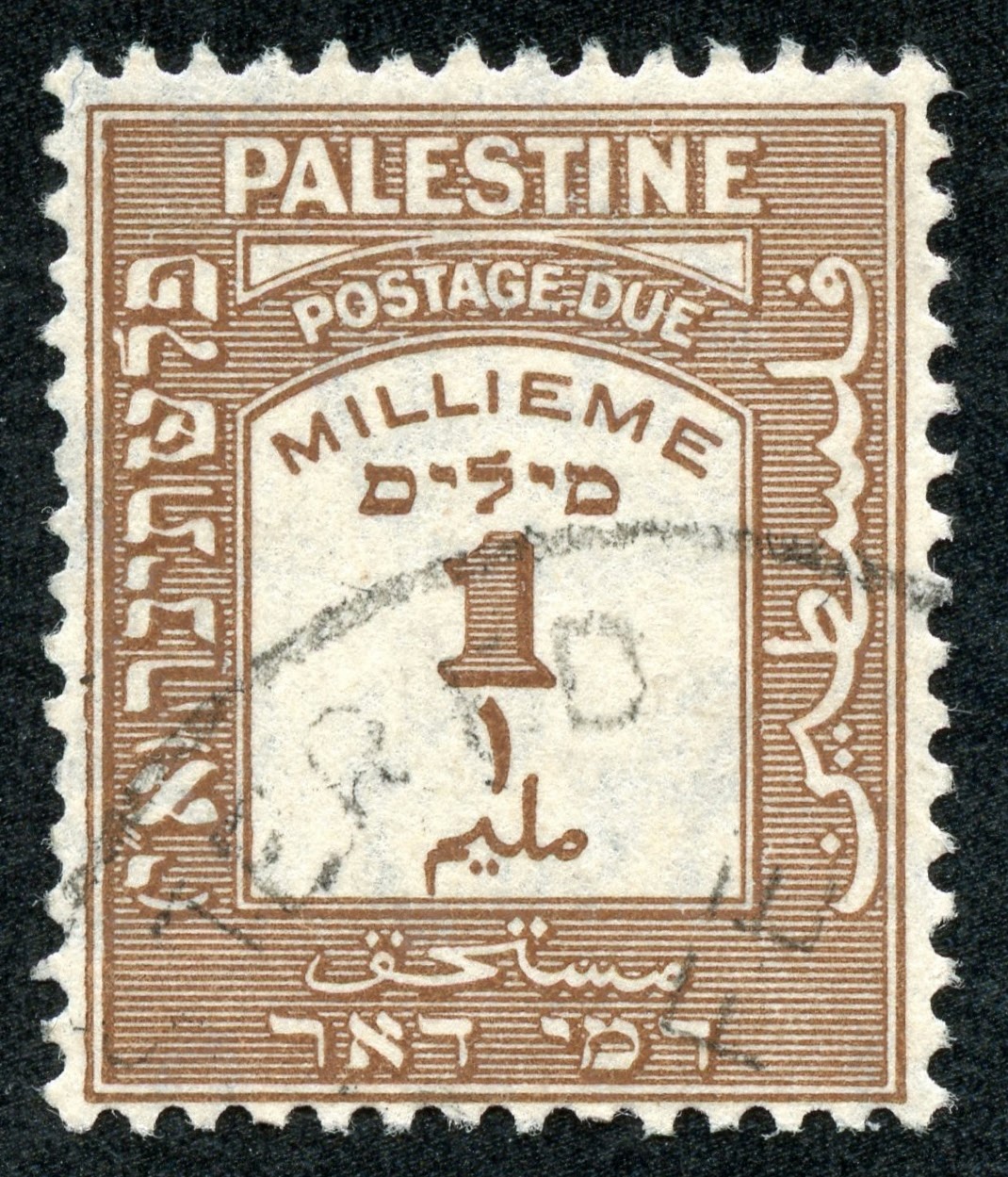 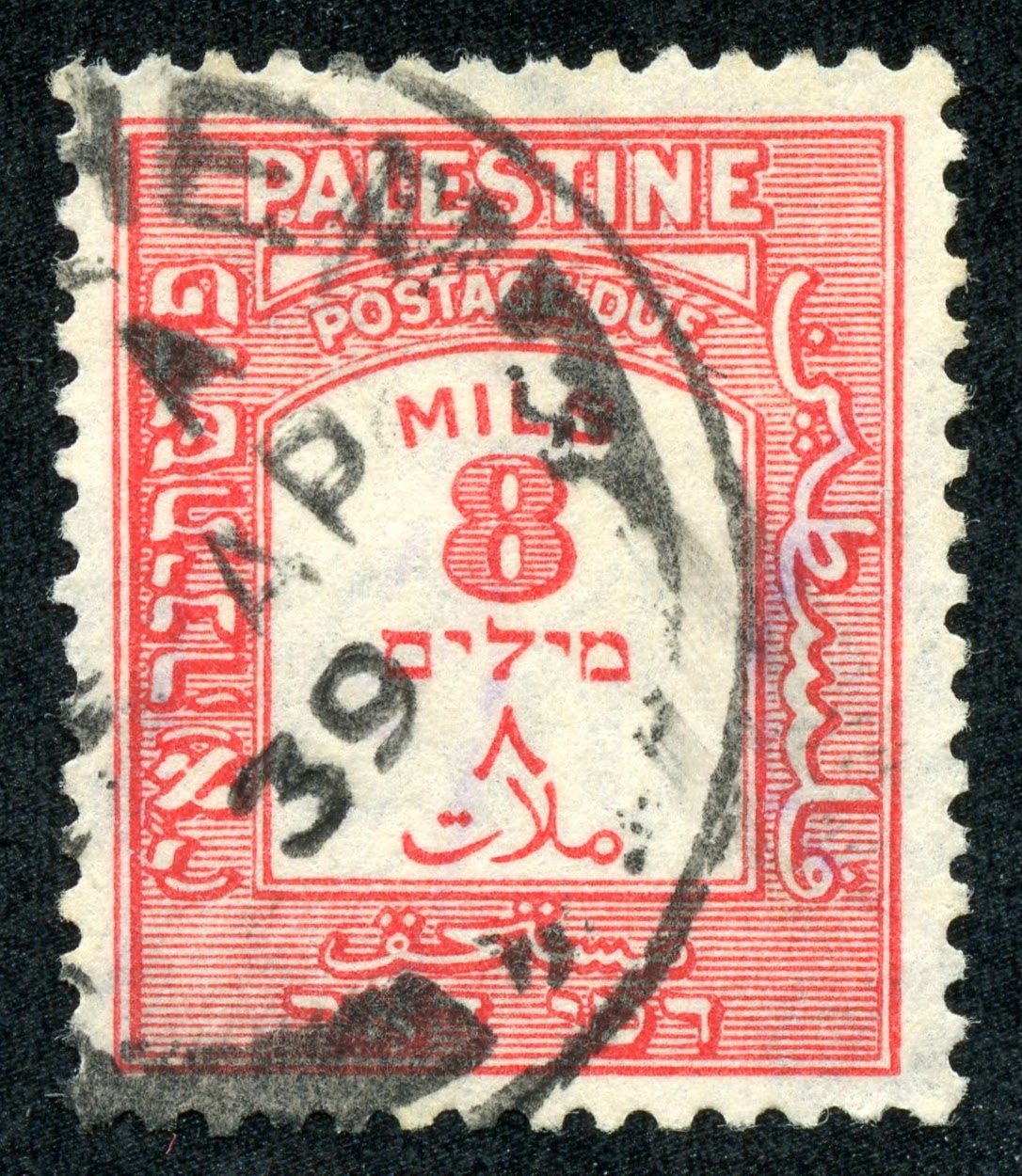 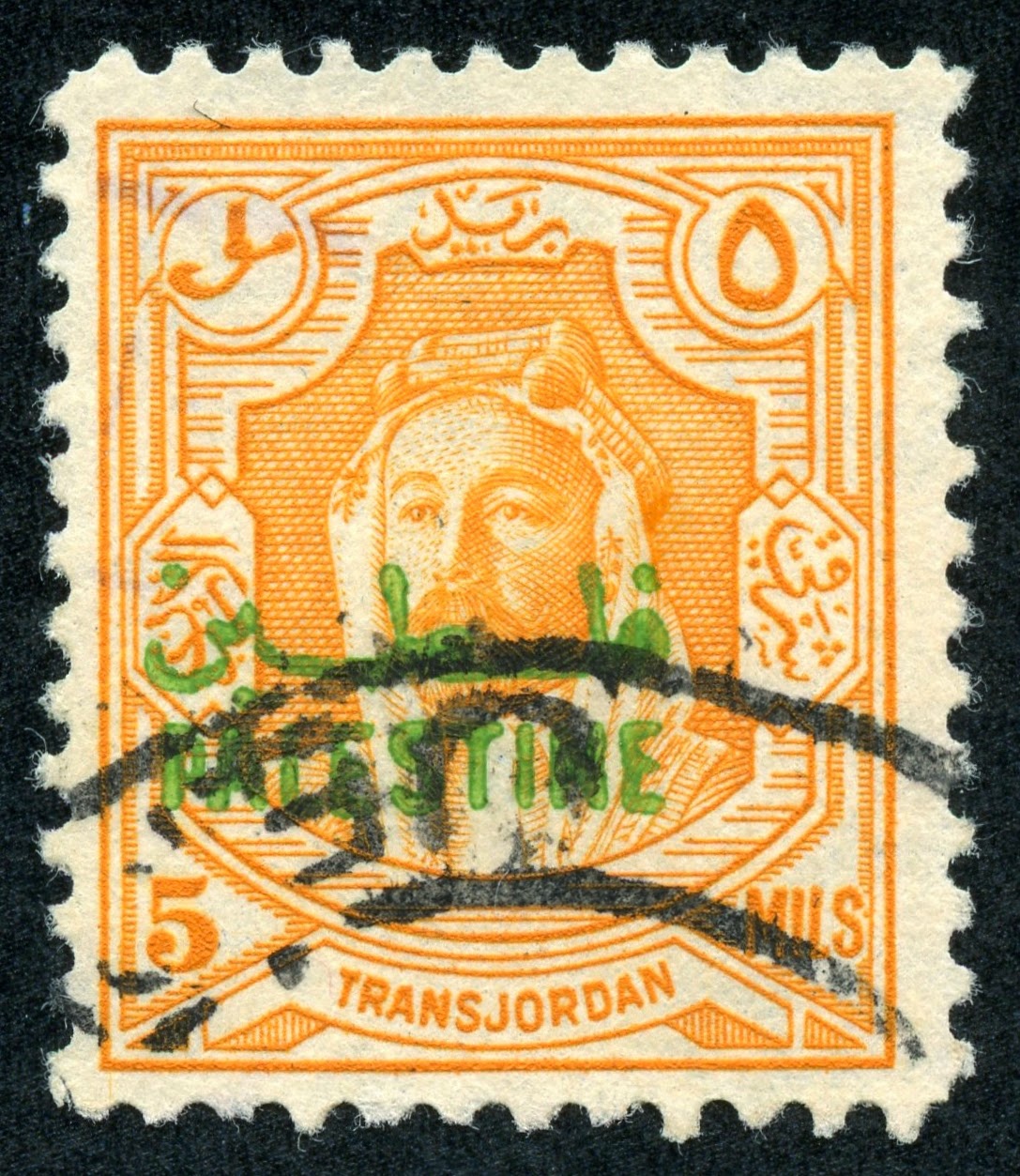 1948 Scott N7 5m orange
Occupation of Palestine by Jordan
Although not part of the stamp coverage in the Scott Classic 1840-1940 catalogue, here is an example of the occupation stamps of 1948.


1948-67
Jordanian occupied West Bank
Egyptian occupied Gaza Strip
After 1948 Arab- Israeli War
The West Bank was occupied, then was annexed (1950) by Jordan. But in June,1967, as a result of the Six-Day War, the West Bank and East Jerusalem were captured by Israel.

The West Bank has not been annexed by Israel, but remains under Israeli military control.

1922 Issue in Deep Blue
The Deep Blue (Steiner) has six pages for Palestine, and includes a space for the major numbers. In addition, Deep Blue provides 22 spaces for the minor number overprint variants. Nice! 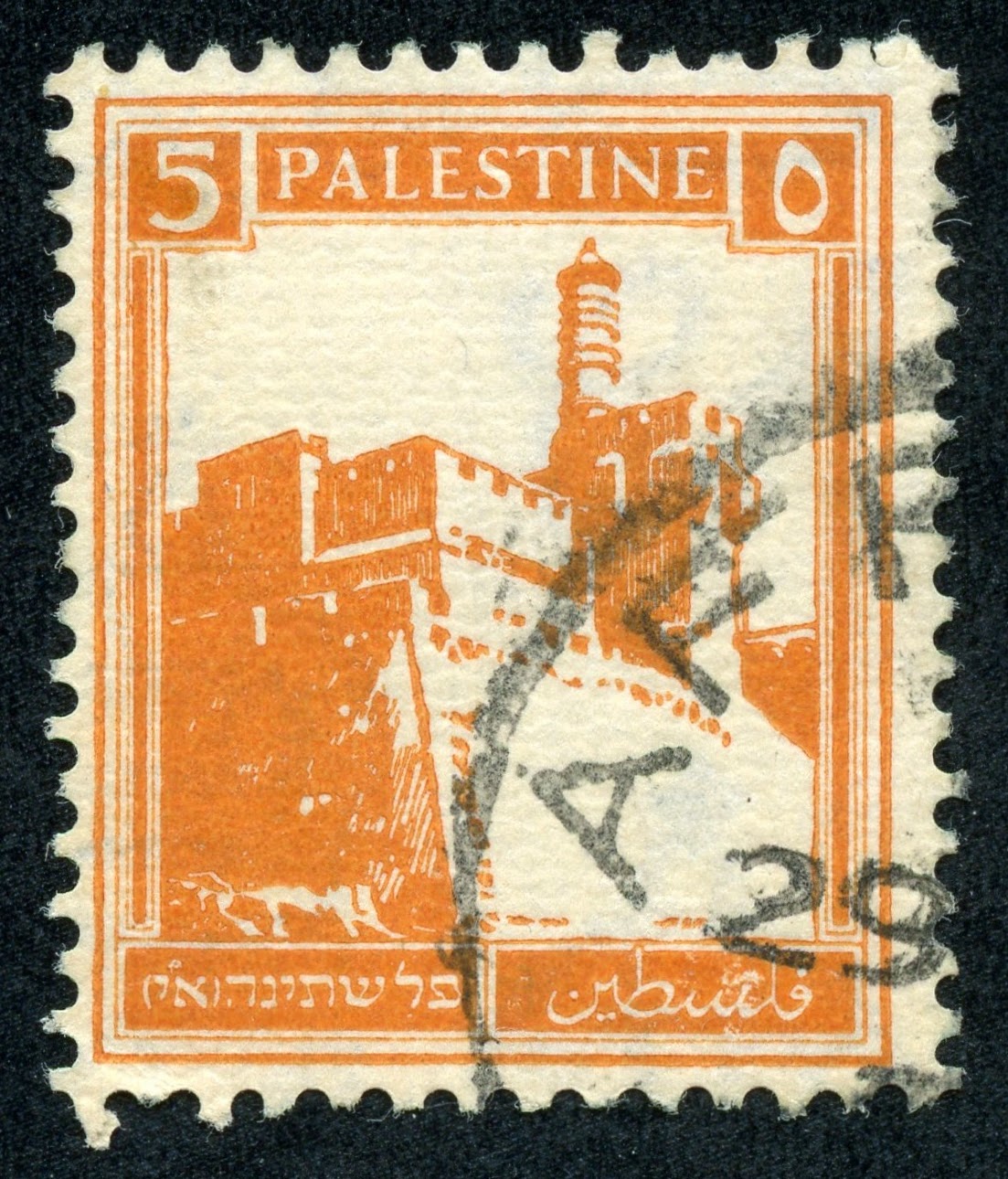 1927 Scott 67 5m brown orange
"Citadel at Jerusalem"
Big Blue
The "69 Big Blue, on two pages, has 61 spaces for the stamps of Palestine. The pages are located between "Orange River Colony" and "Panama". Coverage is 66%.

Of interest, the 1940s editions only have one page for Palestine and 50 spaces.

The '69 ( and later) editions include all the Palestine postage due issues (20 stamps!), including three postage dues with CV $10-$20. 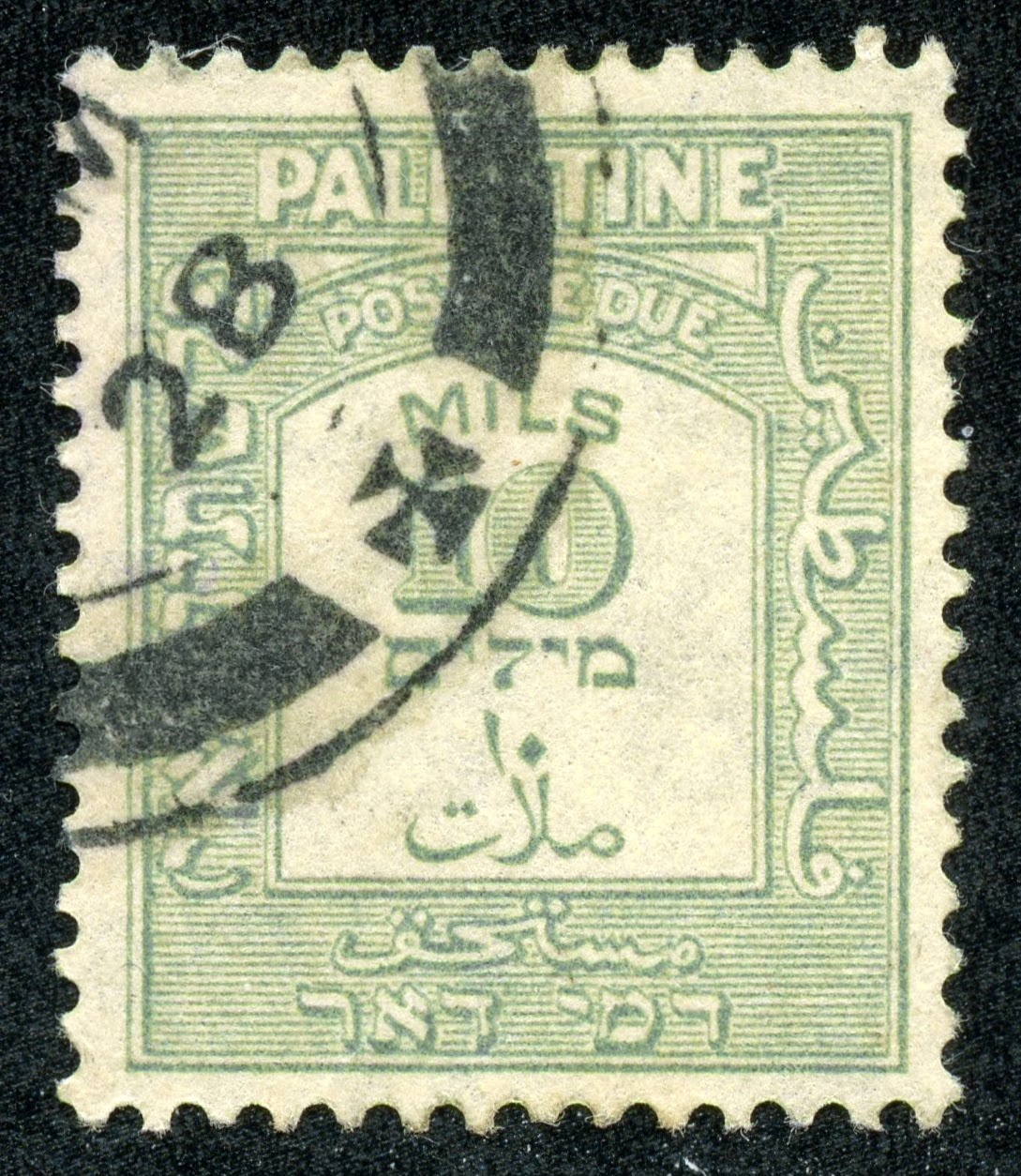 1928 Scott J17 10m light gray
Postage Due
Out of the Blue
The 1918-45 British Mandate stamps of Palestine, perhaps, do not capture all of the turbulent activities of the times.

But, incredible history (both ancient and modern), if there ever was one. The juxtaposition of Christian, Jew, and Muslim cultures makes this one of the most fascinating places on earth.


Note: Maps, pics appear to be in the public domain.

Comments are appreciated!
Posted by Jim at 7:25 PM