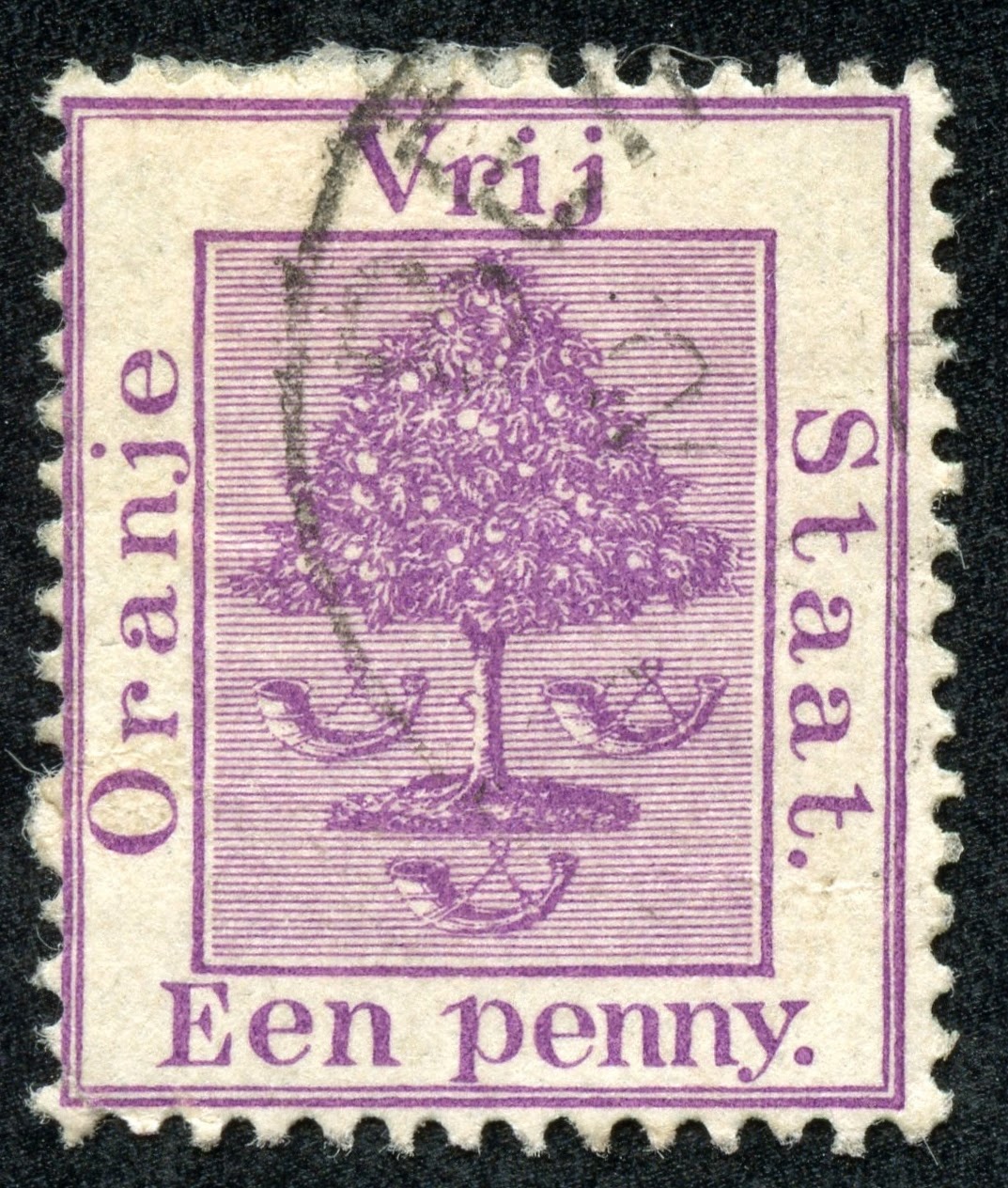 Orange Free State
1894 1p violet "Orange Tree"
Quick History
The Orange Free State (Oranje-Vrijstaat), founded by Dutch (Boer) settlers in 1854, was located between the Orange and Vall rivers in southern Africa. The Orange river, by the way, was named for the House of Orange, the ruling Dutch royal family. 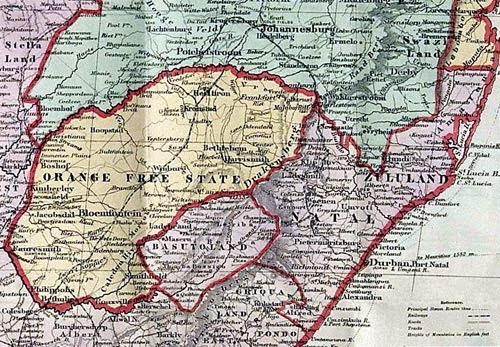 Orange Free State circa 1900
The Capital was Bloemfontein, the population was 100,000 in 1875, and the official language was Dutch.

The Boers, some 3000 strong, had initially left the Cape Colony area on "The Great Trek" to try to escape from British administration. They originally settled in Natal, but the British had then extended their reach there also. So they again moved in 1843 north to the lands that would become the Orange Free State. 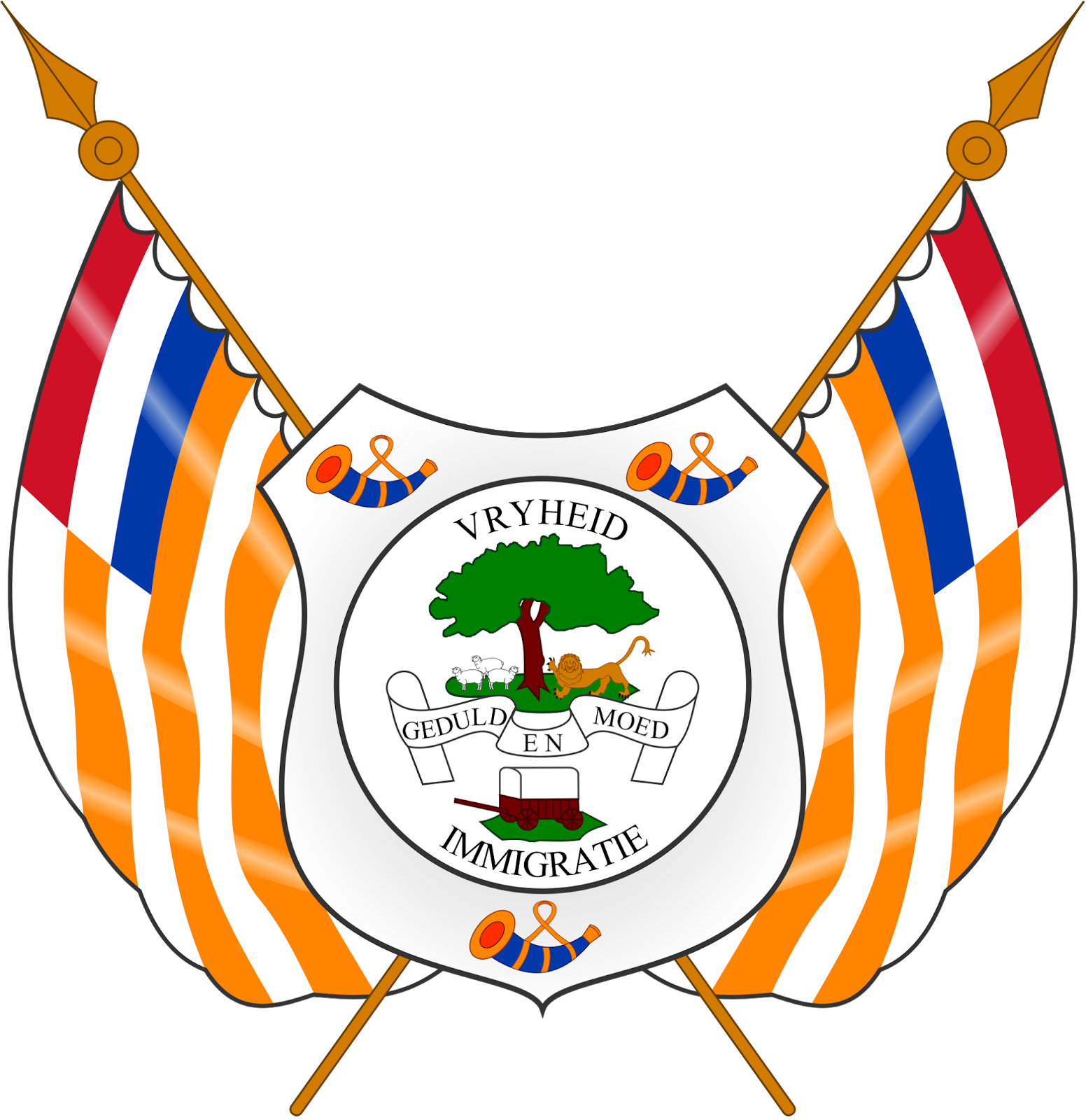 Orange Free State "Coat of Arms"
The Xhosa and Zulu tribes were not pleased with the newcomers, but the Boers had superior firepower. Eventually, the British recognized the sovereignty of the Orange Free State in 1854.

Stamps were introduced for the Republic in 1868.

Diamond and Gold discoveries would make Transvaal, and to a lesser extent the Orange Free State, much more wealthy and financially secure. The Cape Colony and Cecil Rhodes began a concerted effort to annex the Boer Republics.

The hard fought and bloody Second Boer War (1899-1902) lead to a British victory and the annexation of both independent Boer Republics. (This is fascinating history, but this is a stamp blog, so I will reluctantly stop here.) 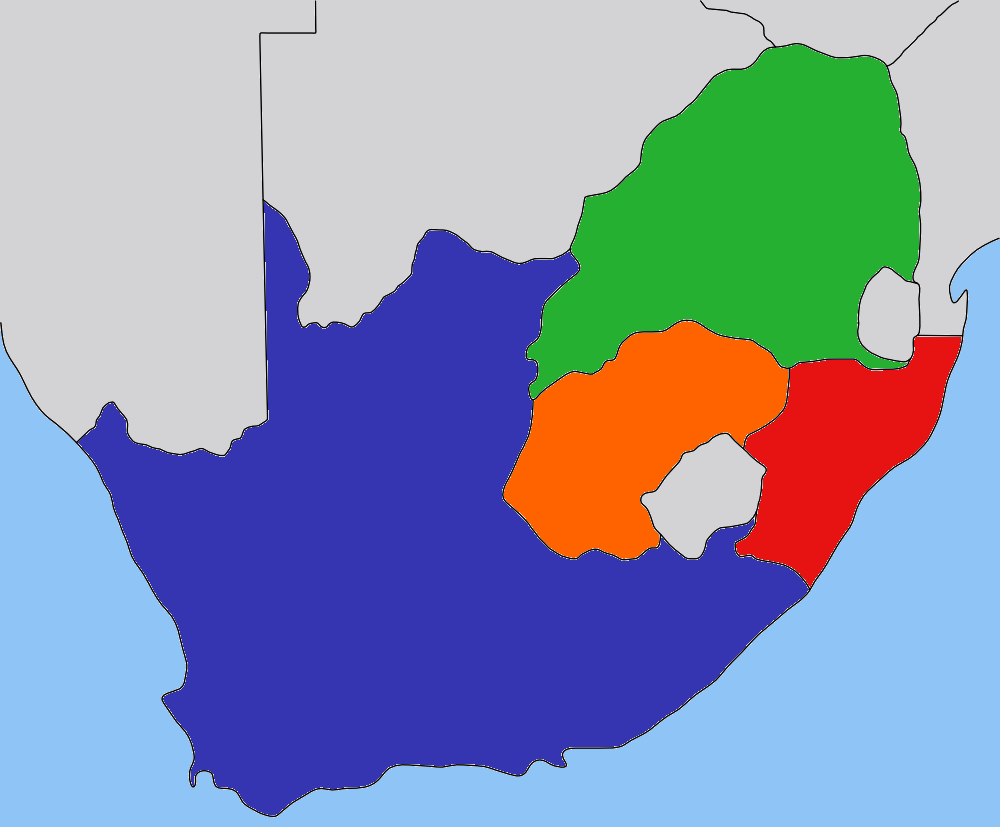 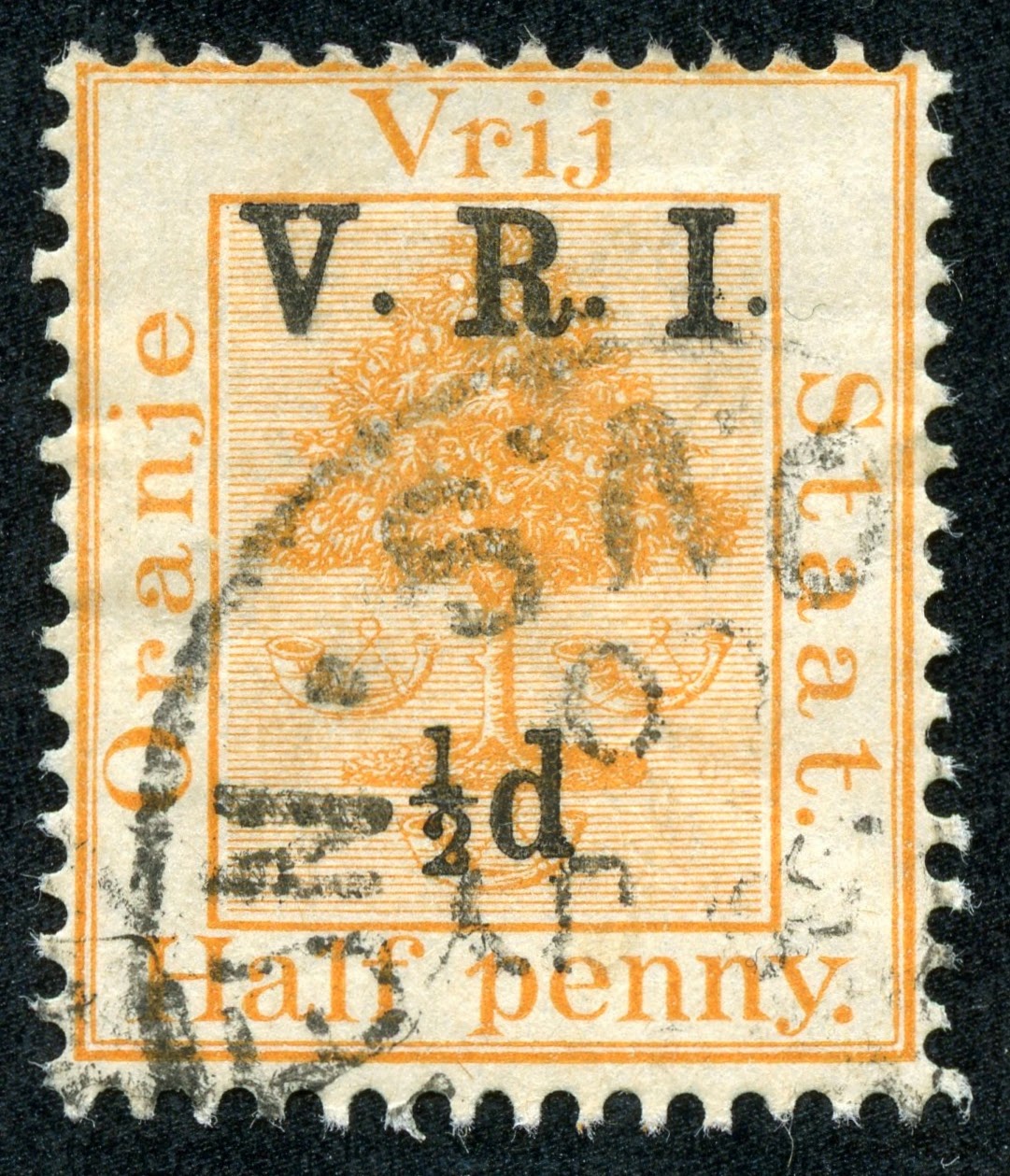 In addition, there are many Scott minor numbers listed, primarily for overprint errors. Although these errors are of interest to the specialist, the WW collector may find some in his/her own collection too. 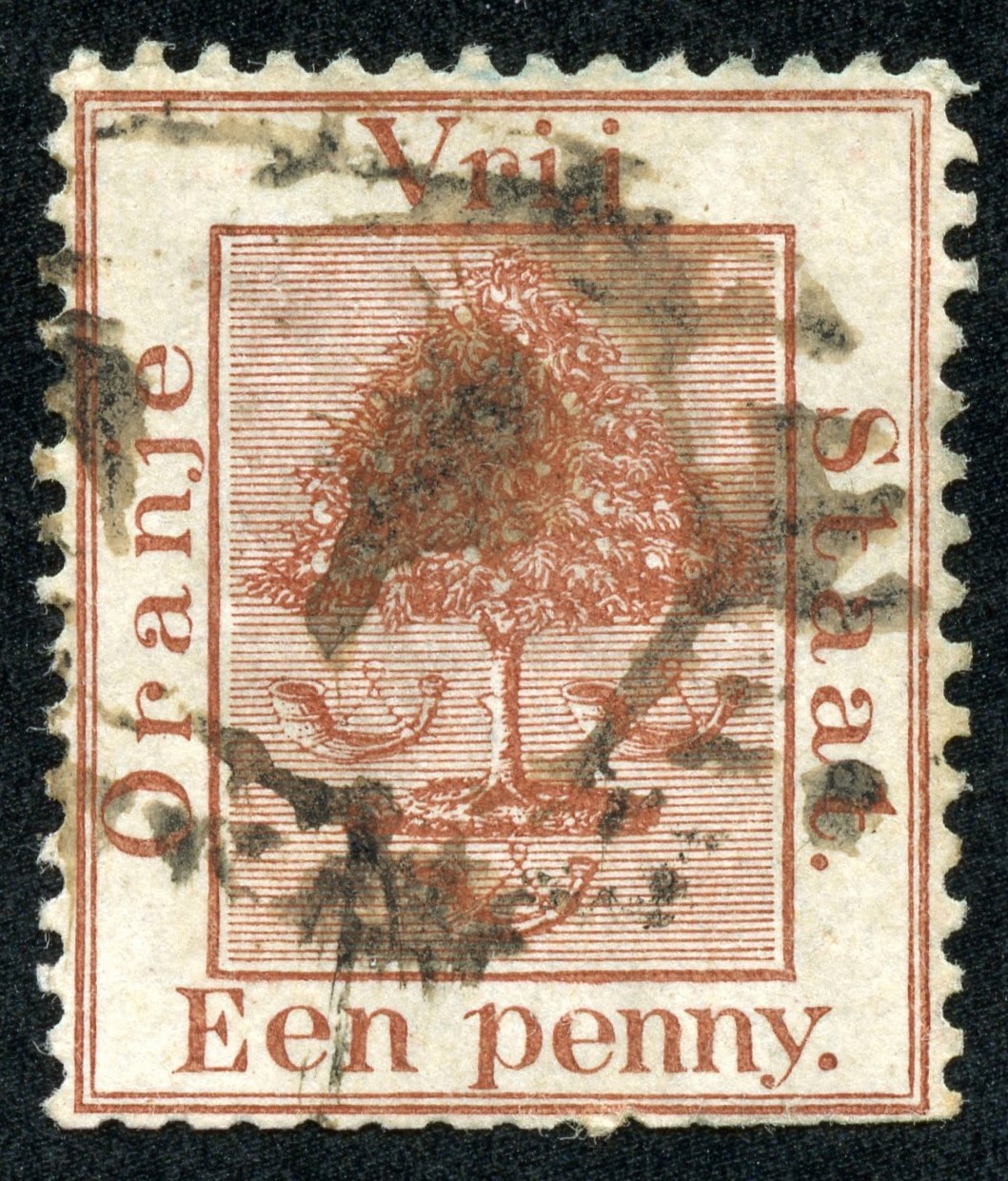 Orange Free State
1868 Scott 3 1p red brown "Orange Tree"
The first (and only) design for Orange Free State stamps was used between 1868-1900, and is found on twelve major issue stamps. Nine stamps are quite inexpensive  @ CV <$1-$2+. There are minor numbers for color variations. 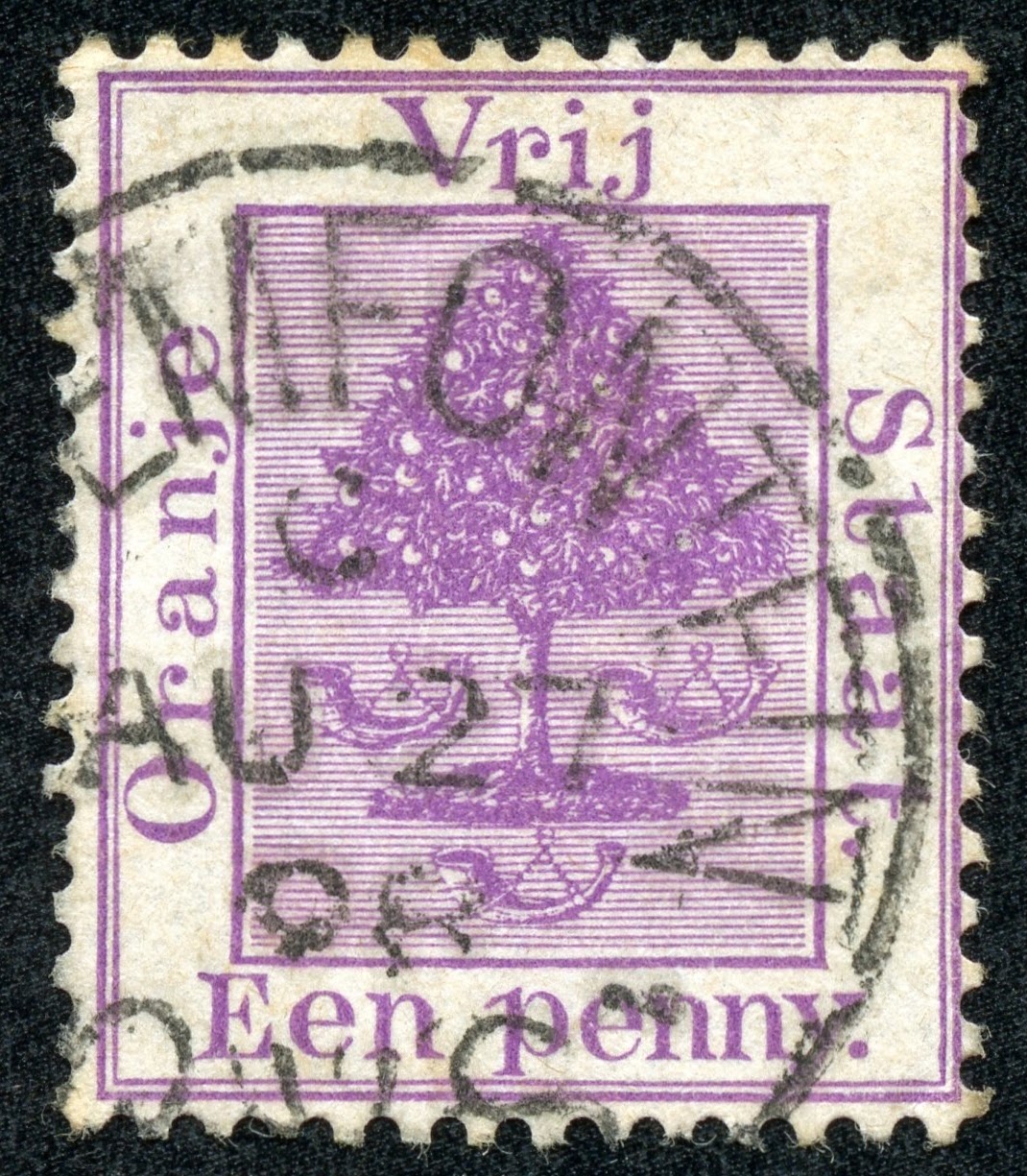 Orange Free State
1894 1p violet "Orange Tree"
This 1p violet has a nice postmark from the capital, "Bloemfontein". I can imagine this issue would be an interesting specialization. 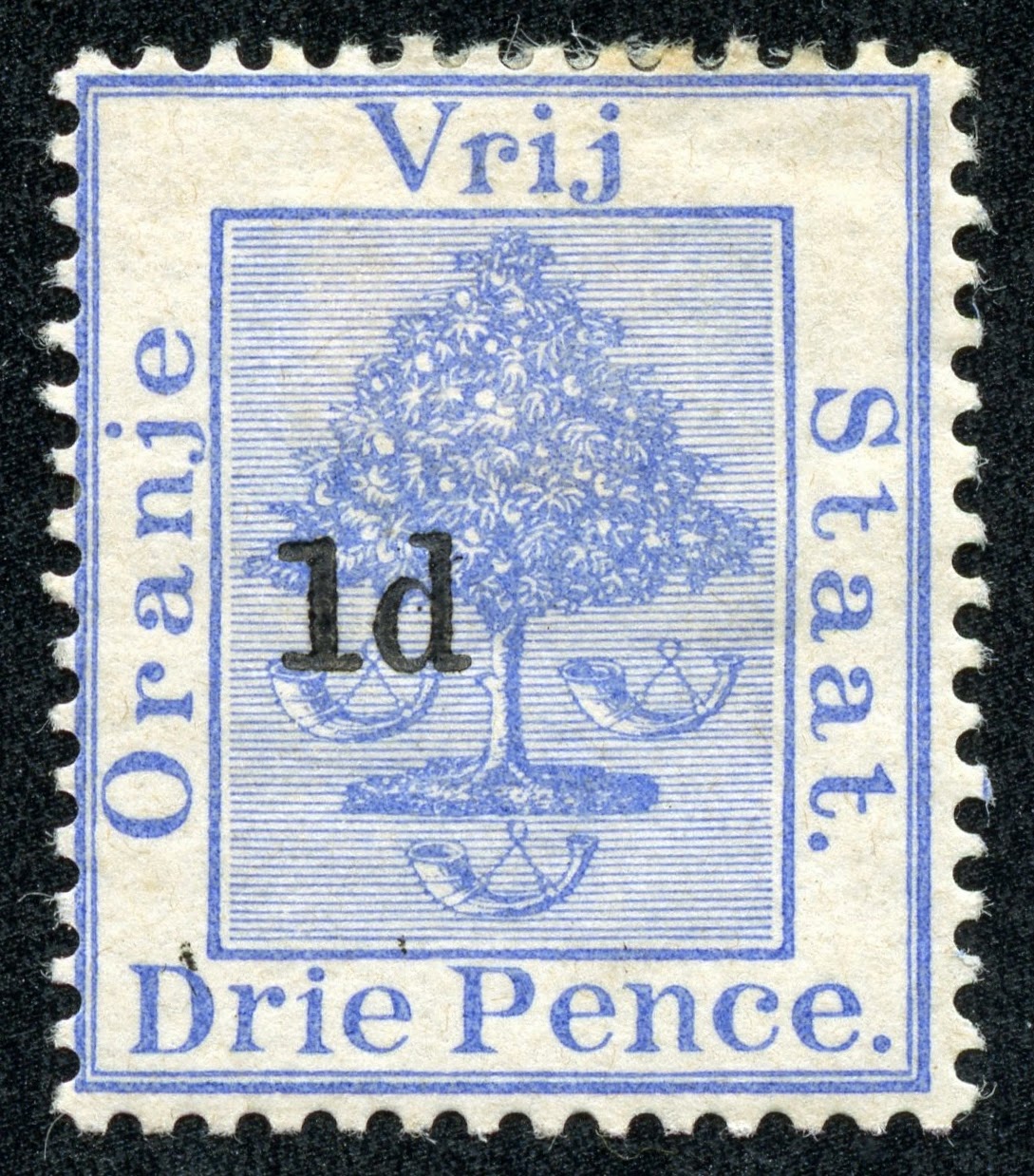 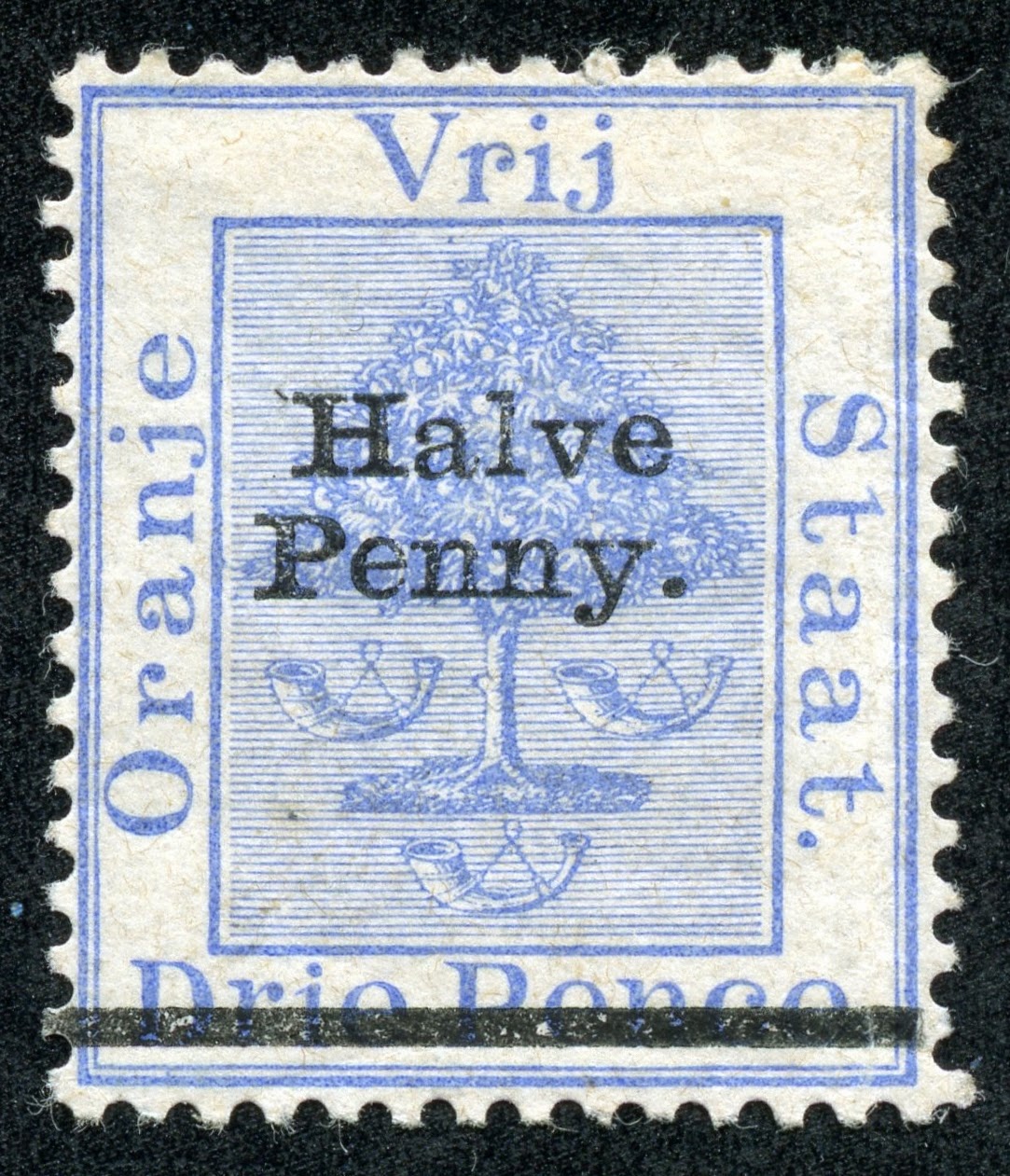 1896 Scott 42 1/2p on 3p ultramarine
Another inexpensive example from 1896. As one can imagine, there are also a tidy group of minor numbers with surcharge printing variants. 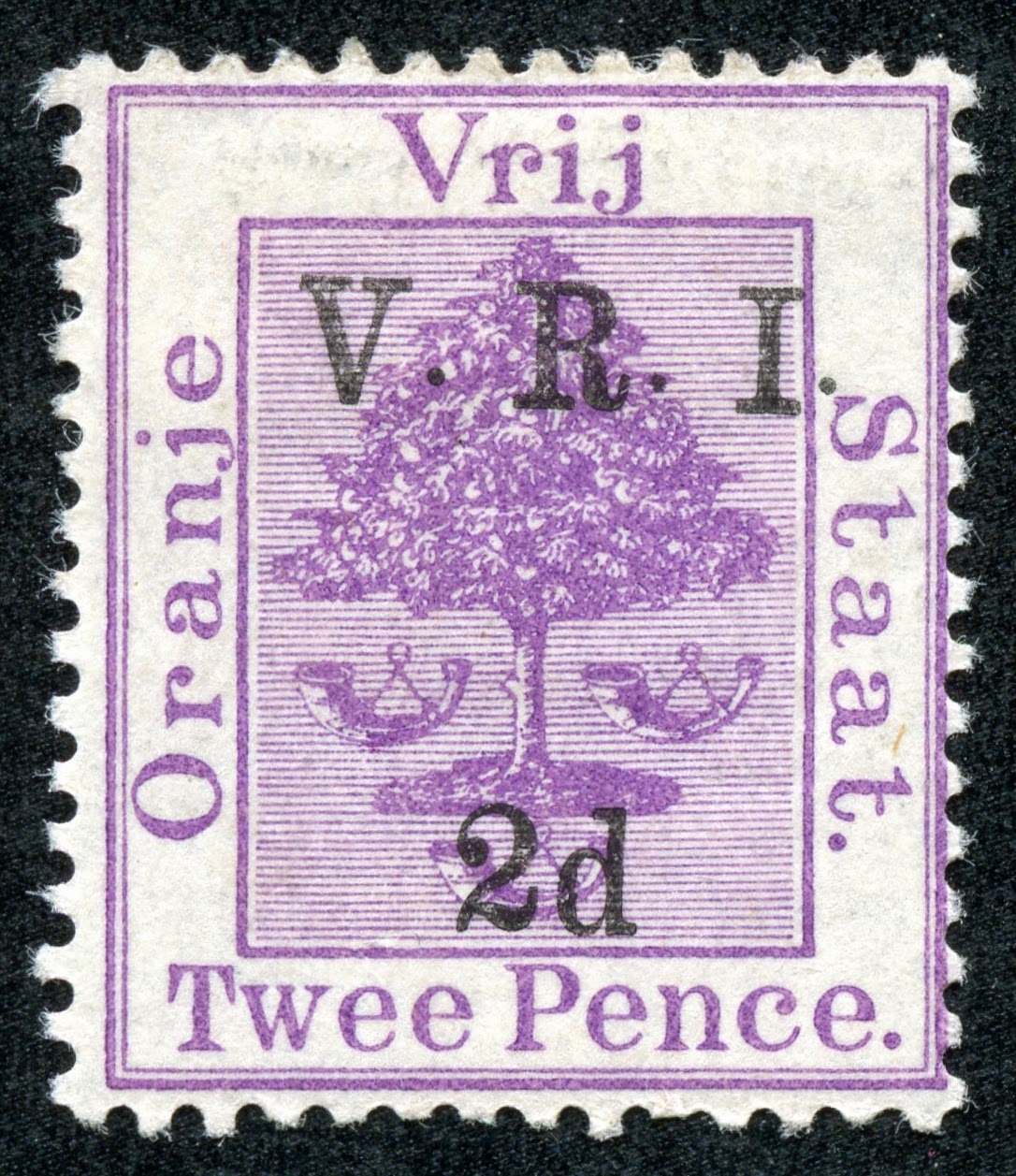 Orange River Colony
1900-01 Scott 46e 2p on 2p violet
Arriving at the beginning of the British occupation, the "V.R.I." overprint comes in two major types. The March-April 1900 issue ( 12 stamps- major numbers) has the periods in "V.R.I." level with the bottom of the letters. CV ranges from <$1- $4 for seven stamps.

The 1900-01 raised "V.R.I." overprints also have numerous ( minor number) printing variants. One is shown later in the blog post.

It might be advantageous to check one's collection for possibilities. 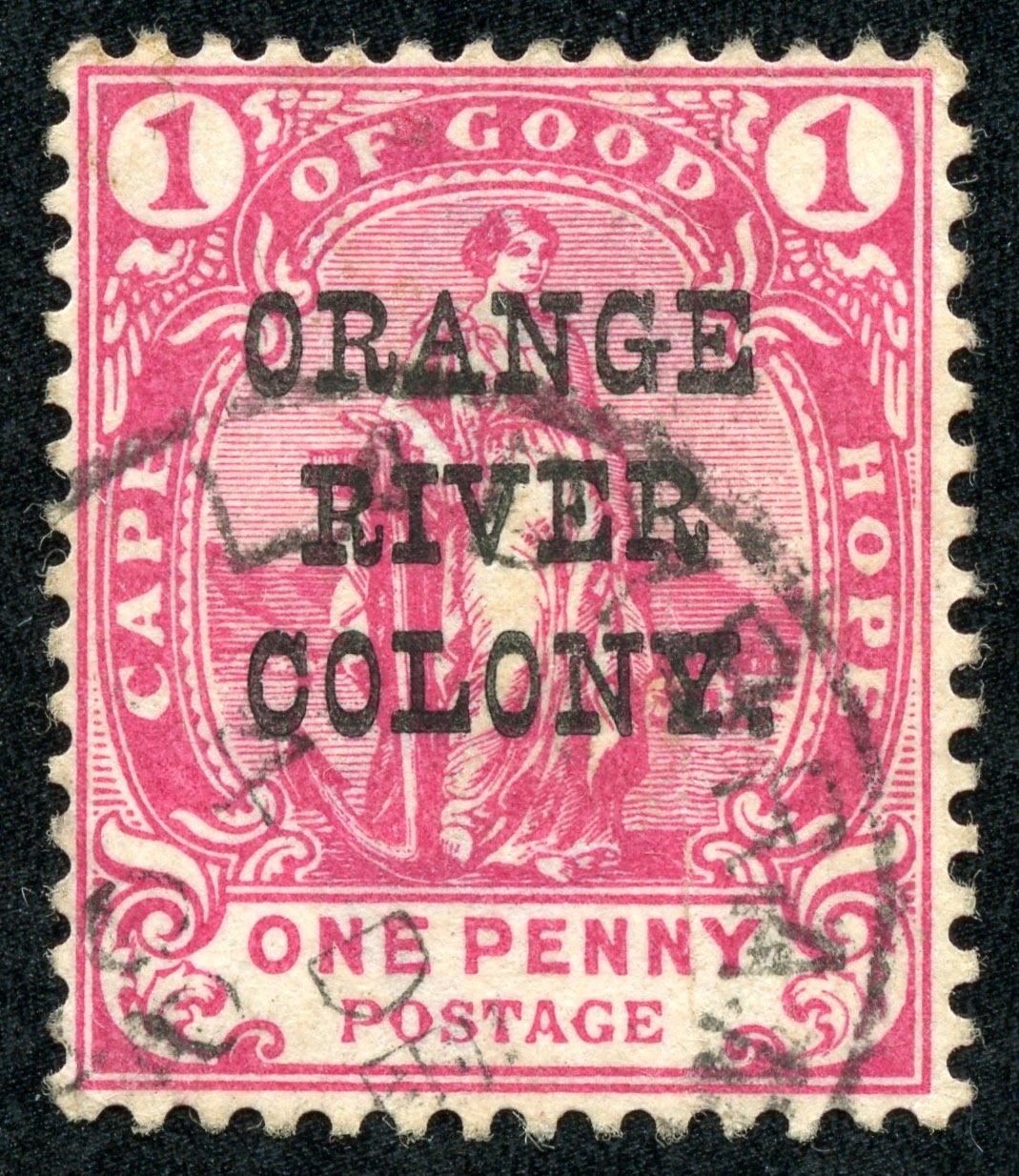 1902 Scott 56 1p carmine rose
Overprinted on Cape of Good Hope Stamp
The "Orange River Colony" was declared by the British on October 6, 1900, although guerrilla warfare continued until 1902. In 1900 ( two stamps), and in 1902 ( this stamp illustrated) were overprinted as shown on Cape of Good Hope stamps. The CV for the three stamps is <$1. 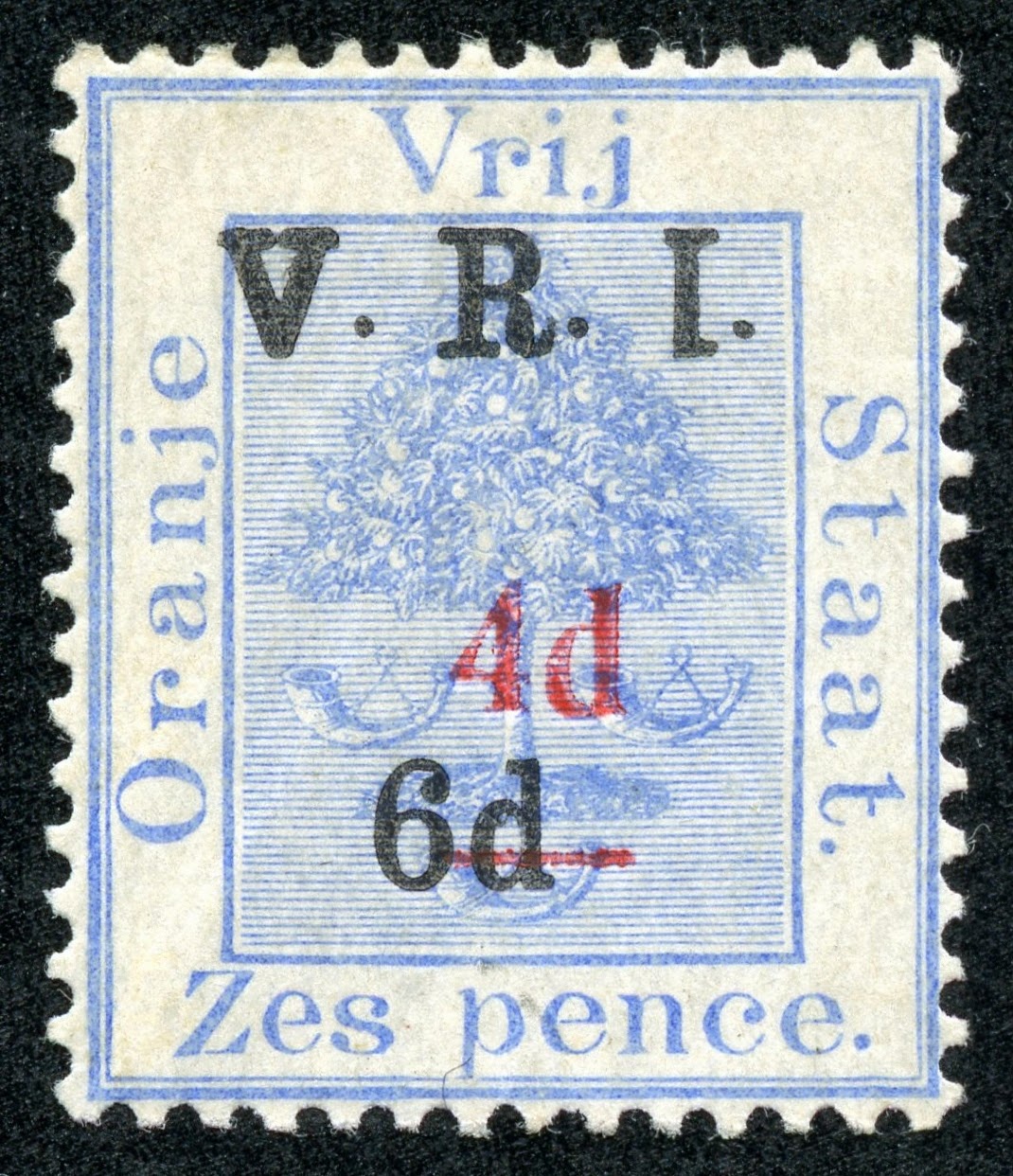 1902 Scott 57b 4p on 6p on 6p ultramarine
Note inverted "1" on this stamp
In 1902, three stamps were additionally surcharged. This example is interesting, because it shows an example of the numerous printing variants found for the Orange Free State/ Orange River Colony overprinted/surcharged types. 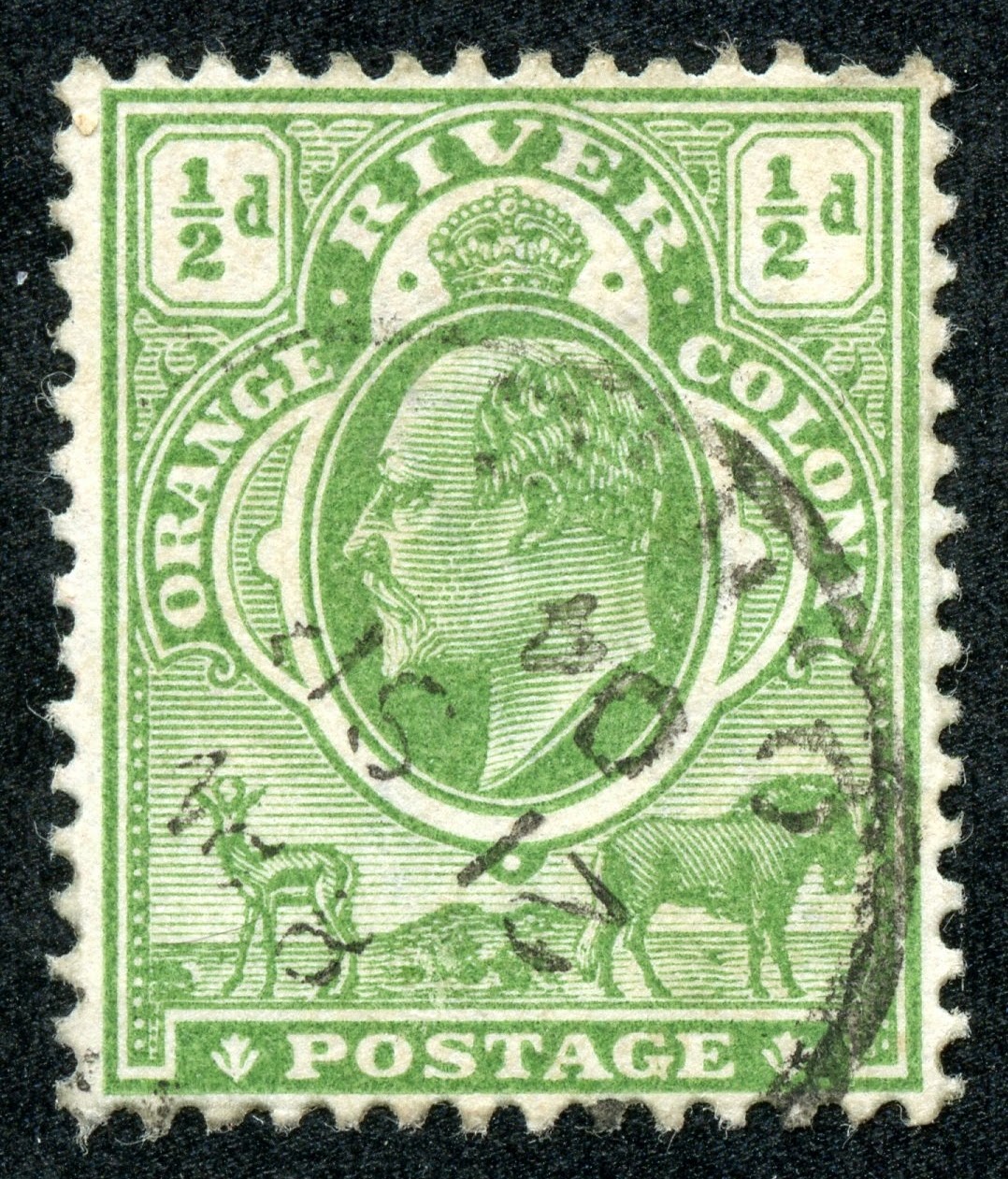 This issue is characterized by the Colonial Watermark 2, " C A and Crown". 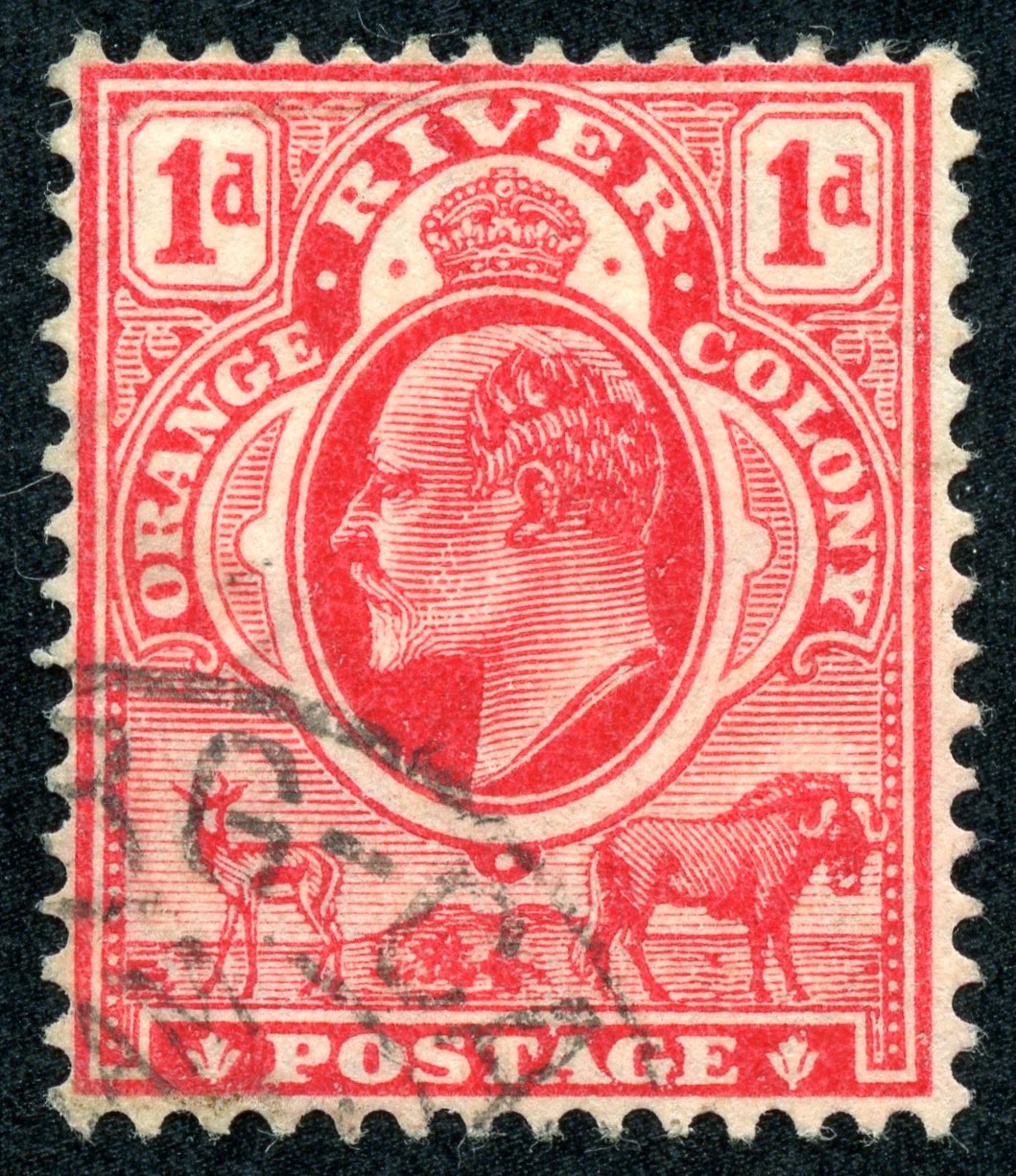 1907-08 Scott 71 1p carmine "Edward VII"
Watermark 3 Issue
A Watermark 3 "Multiple C A and Crown" issue of four stamps was produced in 1907-08. The 1/2p, 1p, 4p, and 1sh denominations can only be differentiated from the earlier 1903-04 issue by checking the watermarks Refer to the Gilbraltar post if a review of the British Colonial watermarks is needed.

In June, 1910, the Orange River Colony was joined with Cape of Good Hope, Natal, and Transvaal to form the Union of South Africa. However, the stamps of the provinces were still valid for postage up to January 1, 1938, when they were demonetized.

1900-01 surcharged issues under British occupation in Deep Blue
Deep Blue (Steiner) has five pages for the Orange Free State and the British occupation (Orange River Colony), and includes a space for all the major numbers. In addition, the Steiner has eleven spaces for the minor number 1900-01 Issue ( where the periods are raised above the bottom of the letters). Nice! 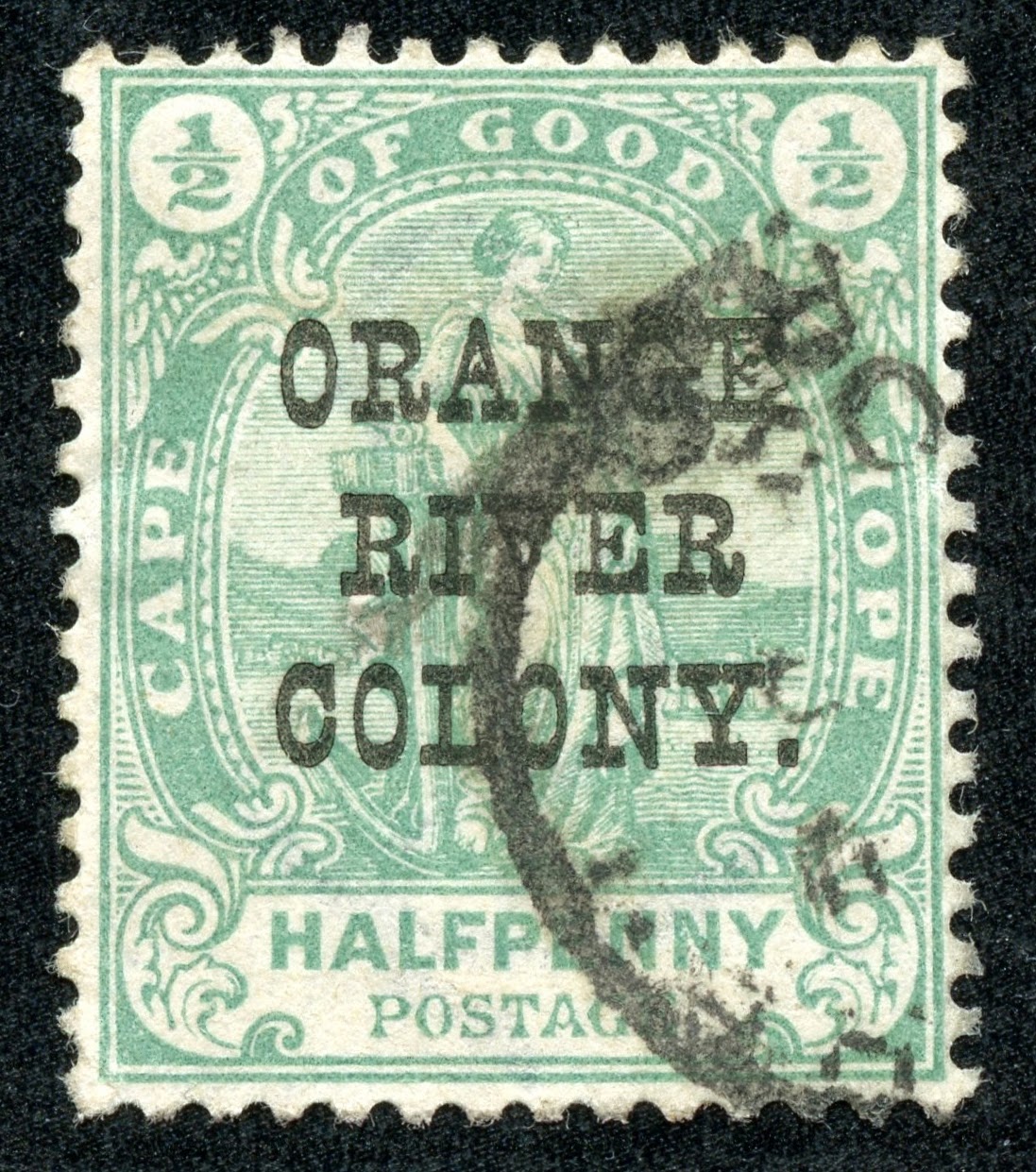 The 40s editions have Orange River Colony located between "Panama" and "Papua". There are only 22 spaces on 2/3 page in those editions.

True-  the '69 editors cut out a number of smaller countries and BOB issues. But, in other cases (such as here), there is better coverage. ;-) 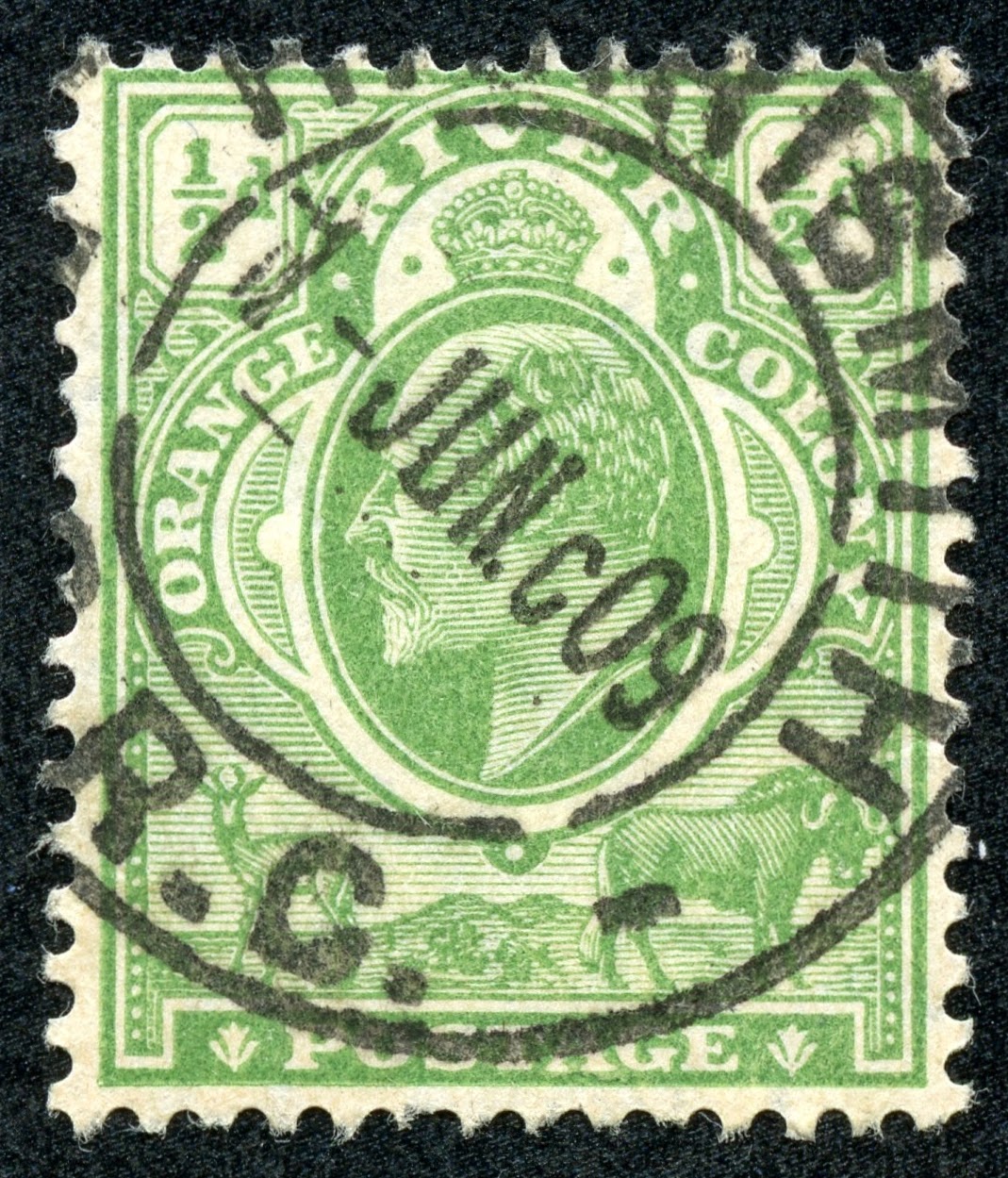 1907 Scott 70 1/2p yellow green "Edward VII"
Watermark 3 Issue
Out of the Blue
The stamps for Orange Free State and Orange River Colony are tangible small pieces of history for a time, era, and place when one of the more horrifying wars that mankind has waged took place. (Neither the Boers nor the British come out looking particularly good IMHO.)

Note: Maps, "Coat of Arms" image, and war image pic all appear to be in the public domain.