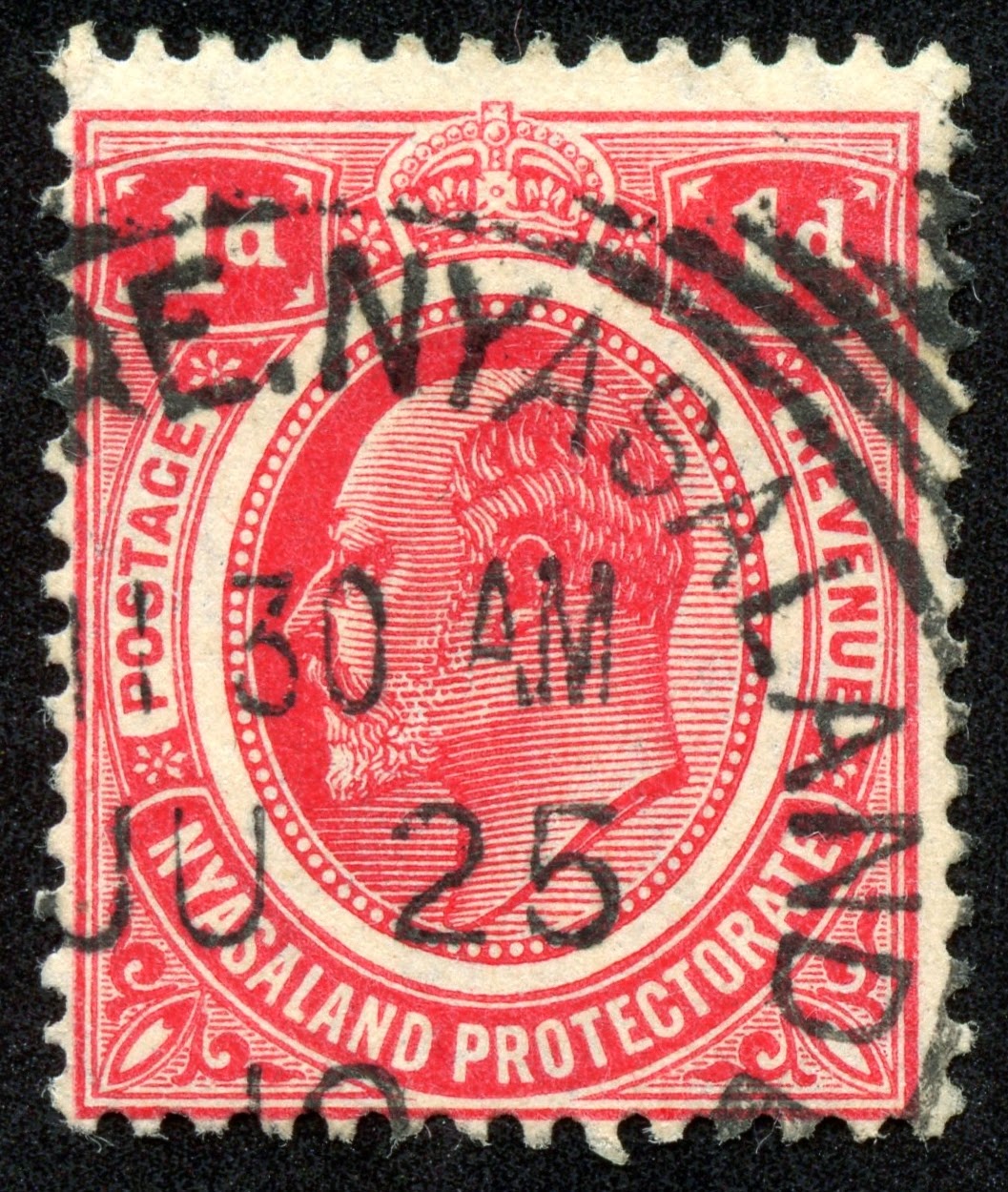 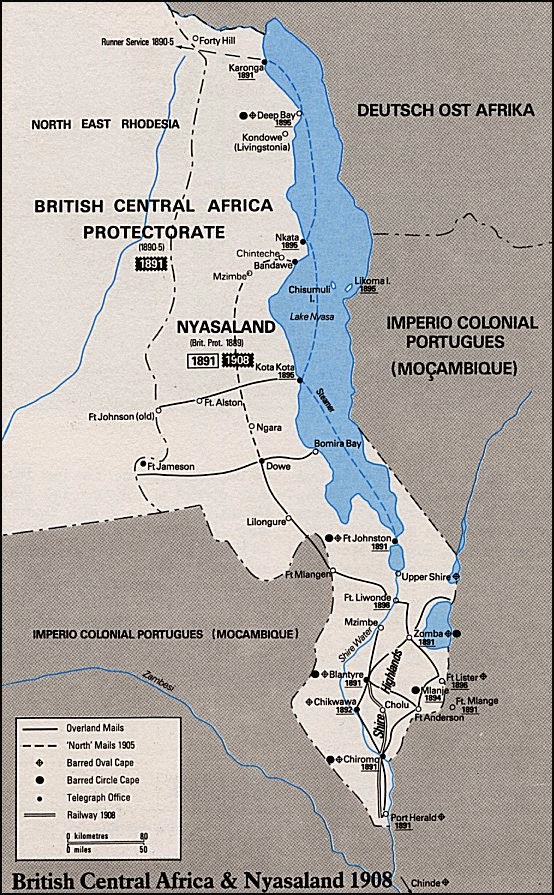 Nyasaland 1908
Cecil Rhodes's British South Africa Company (BSAC) was actually in charge of the protectorate when their authority was withdrawn in 1907, and direct British rule was instituted.

One of the legacies of the British South Africa Protectorate and the BSAC is white settlers were brought in who developed coffee plantations using African labor.

Nyasaland was part of the Federation of Rhodesia and Nyasaland between 1853-1963, but became independent as the nation of Malawi in 1964. 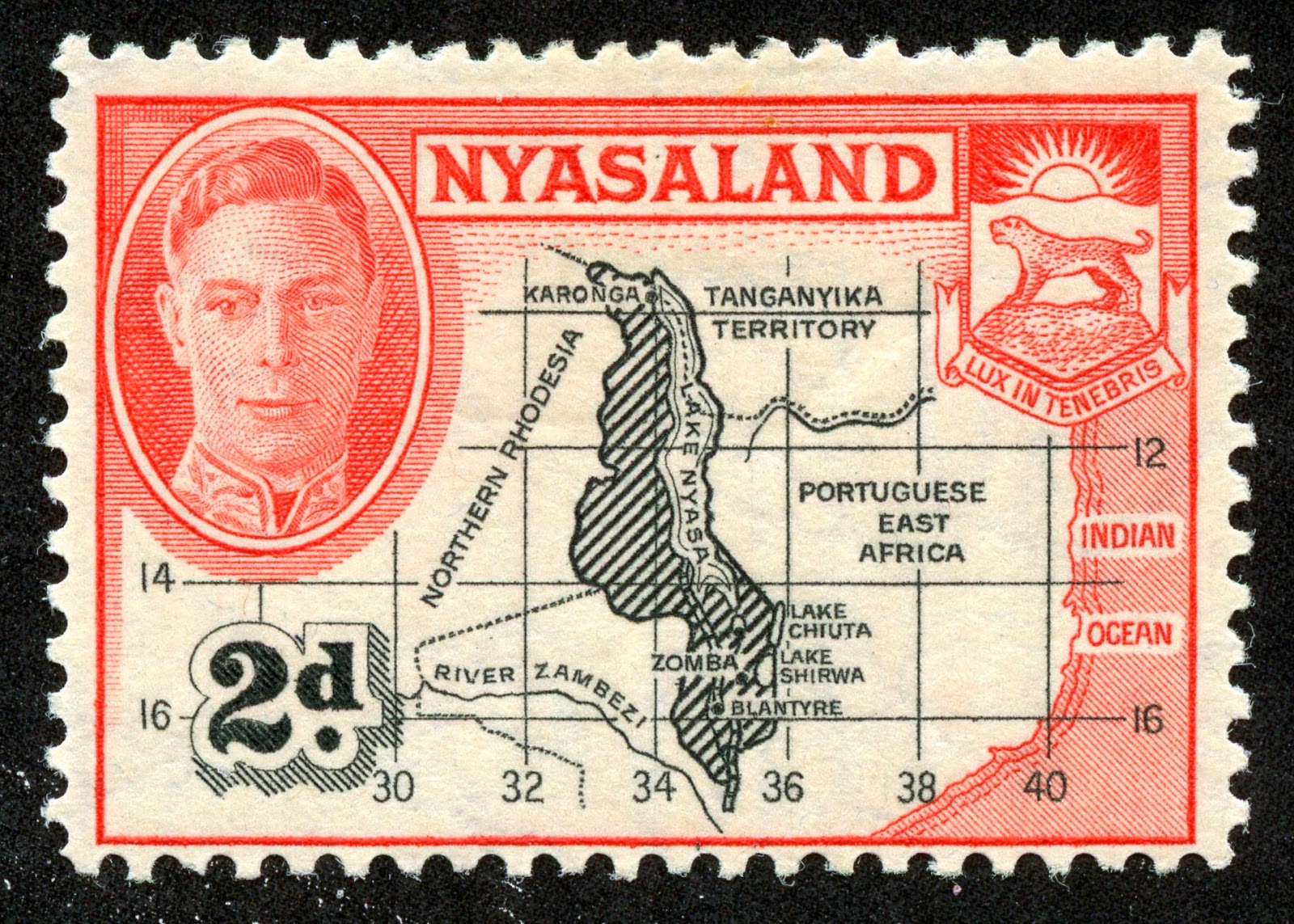 On July 22, 1908, "King Edward VII" stamps with "Nyasaland Protectorate" script were introduced. In 1934, the script was changed to "Nyasaland". 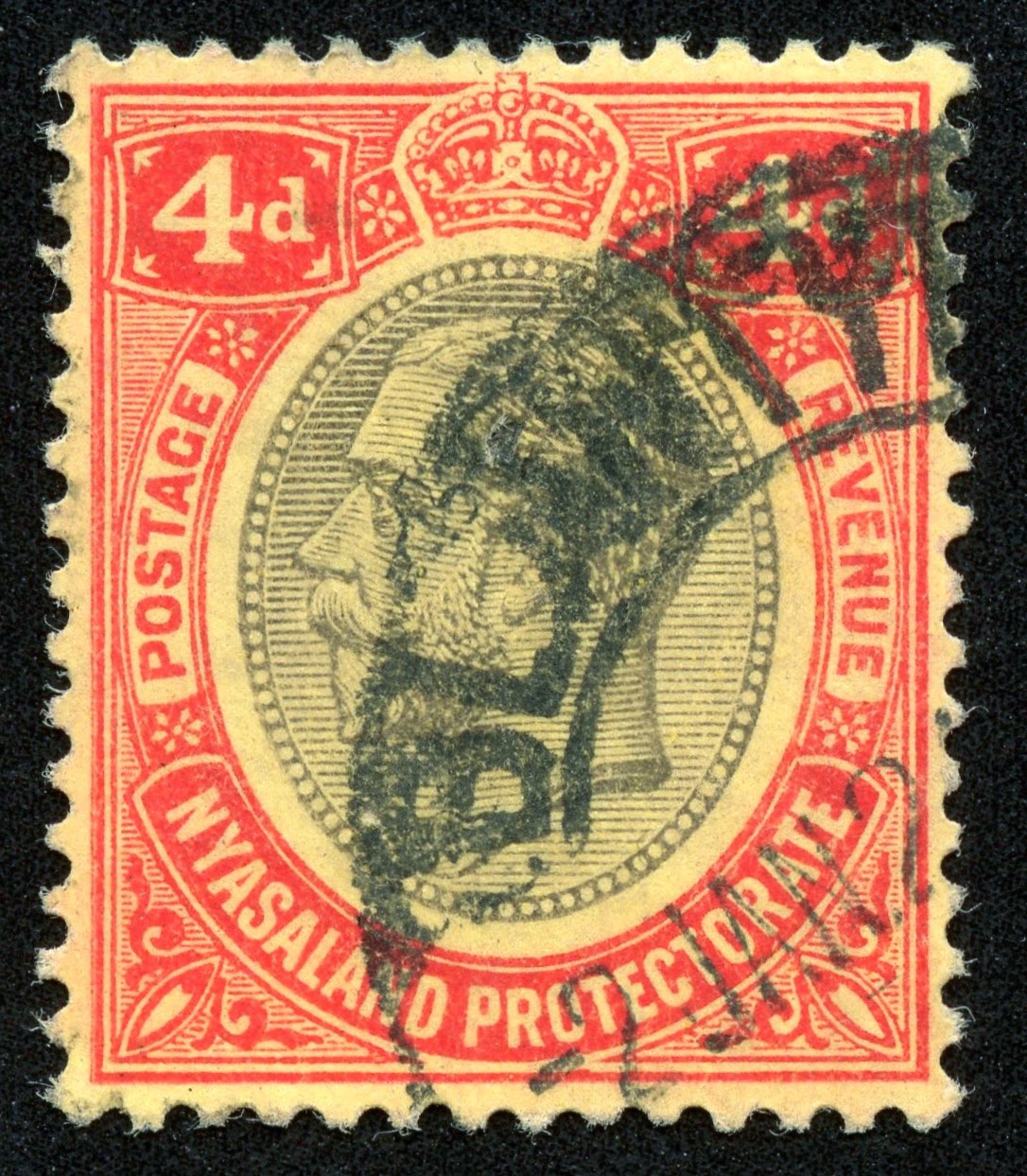 1913 Scott 17 4p scarlet & black/ yellow "George V"
Into the Deep Blue
The 2011 Scott Classic Specialized catalogue has, for the Nyasaland Protectorate 1908-1951, 103 major descriptive numbers. Of those, 44, or 43% are CV <$1-$1+. As a British Protectorate, the CV for their stamps are a bit higher than many countries, driven by the many British Commonwealth collectors. 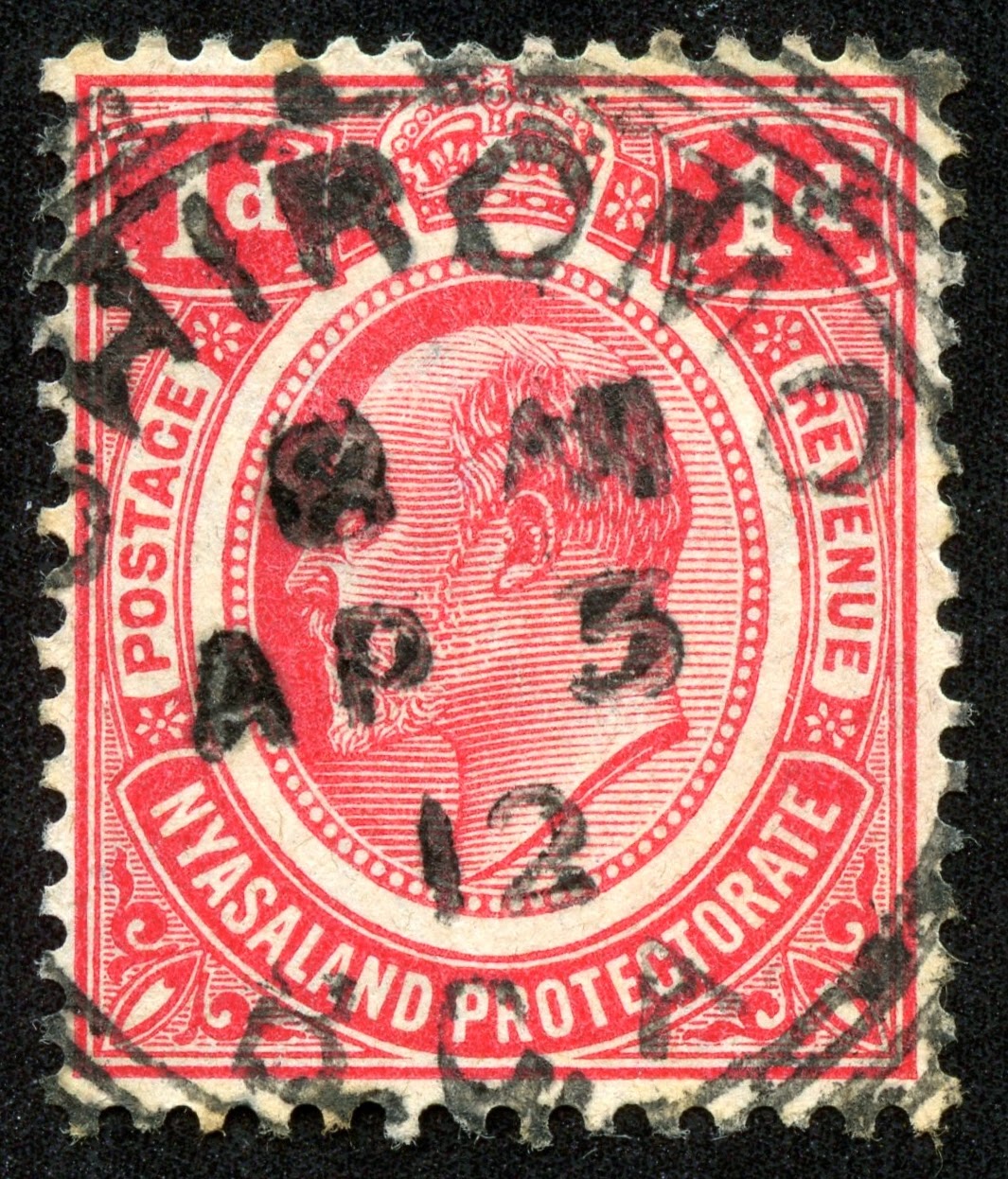 1908 Scott 3 1p carmine "Edward VII"
In 1908, an 11 stamp issue with an "Edward VII" vignette was produced for the newly named "Nyasaland Protectorate". Note the postmark here with "Chiromo", a settlement on the south-western edge next to Mozambique. Although apparently used in 1912, the postmark still bears "B.C.A", for "British Central Africa". 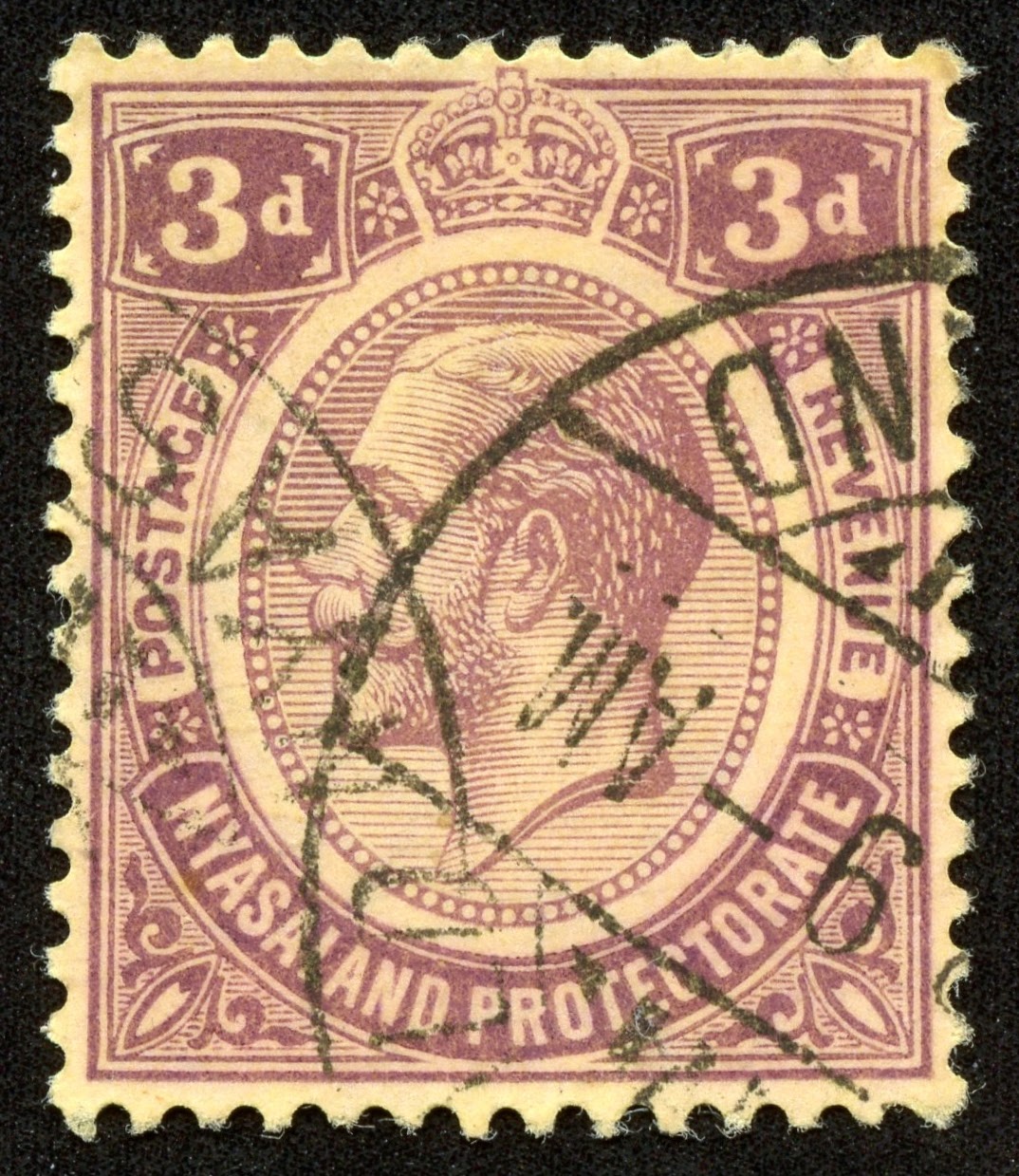 BTW, a "N. F." overprint on these stamps is for "Nyasaland Force", and are 1916 occupation stamps for German East Africa. 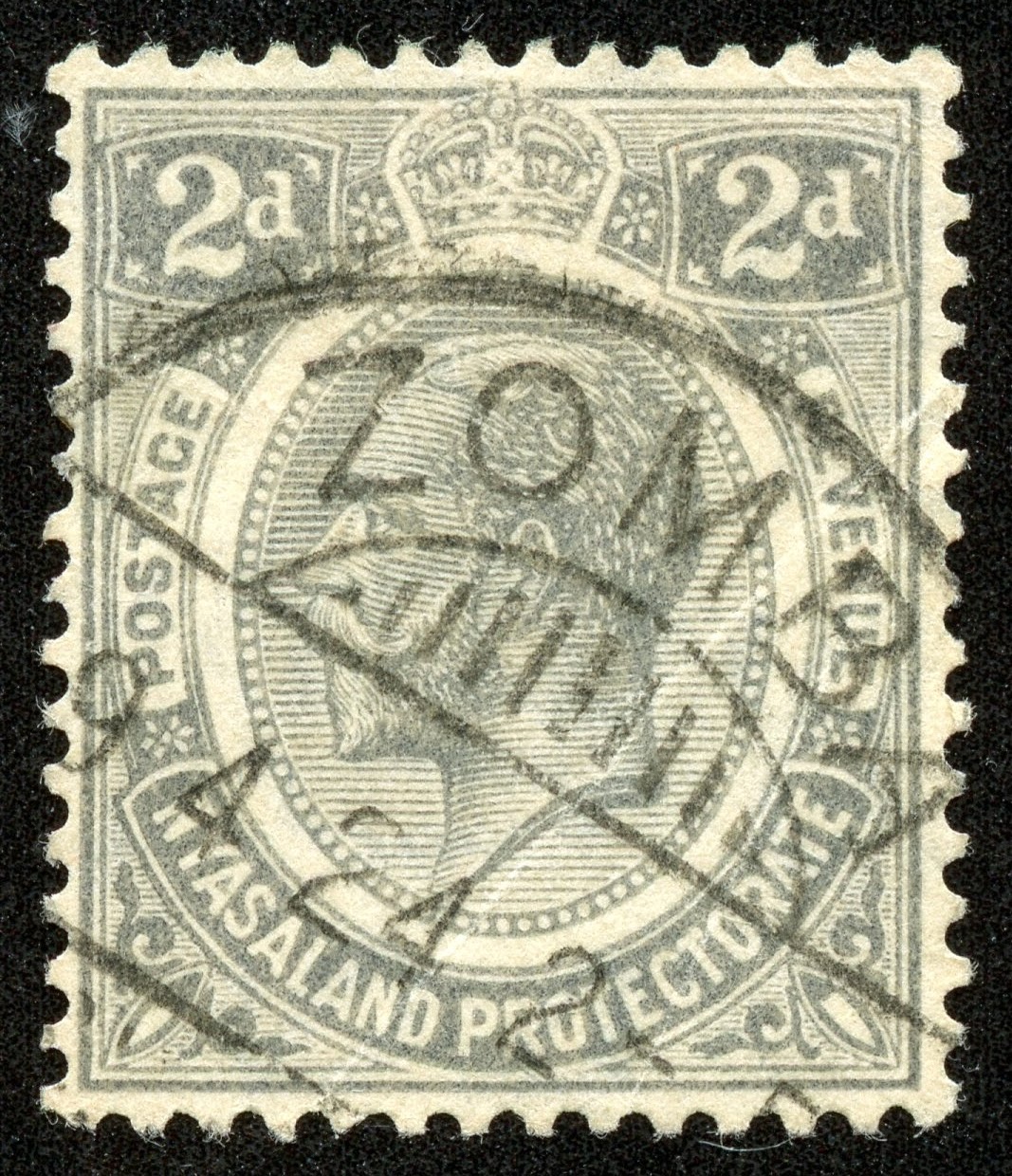 1921 Scott 28 2p gray "George V", Wmk 4
A second 13 stamp issue with "George V", but with wmk 4 "Multiple Crown and Script C A" was released between 1921-30. ( If the memory needs refreshing about British Colonial watermarks, check the blog post Malta, or one of the other British colonial posts.)

Note the postmark shows "Zomba", the capital at the time. There is apparently still some British colonial architecture extant in Zomba. 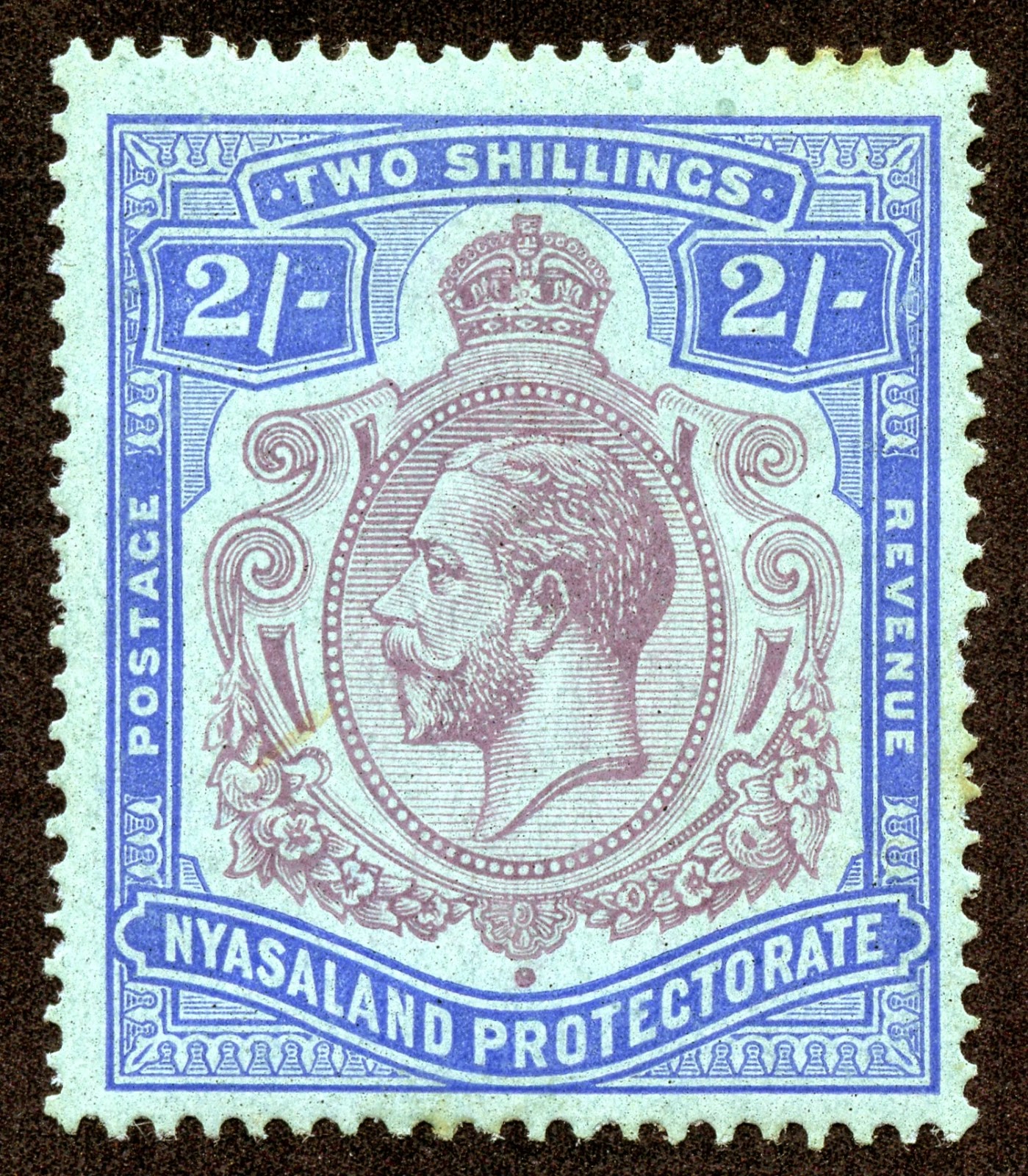 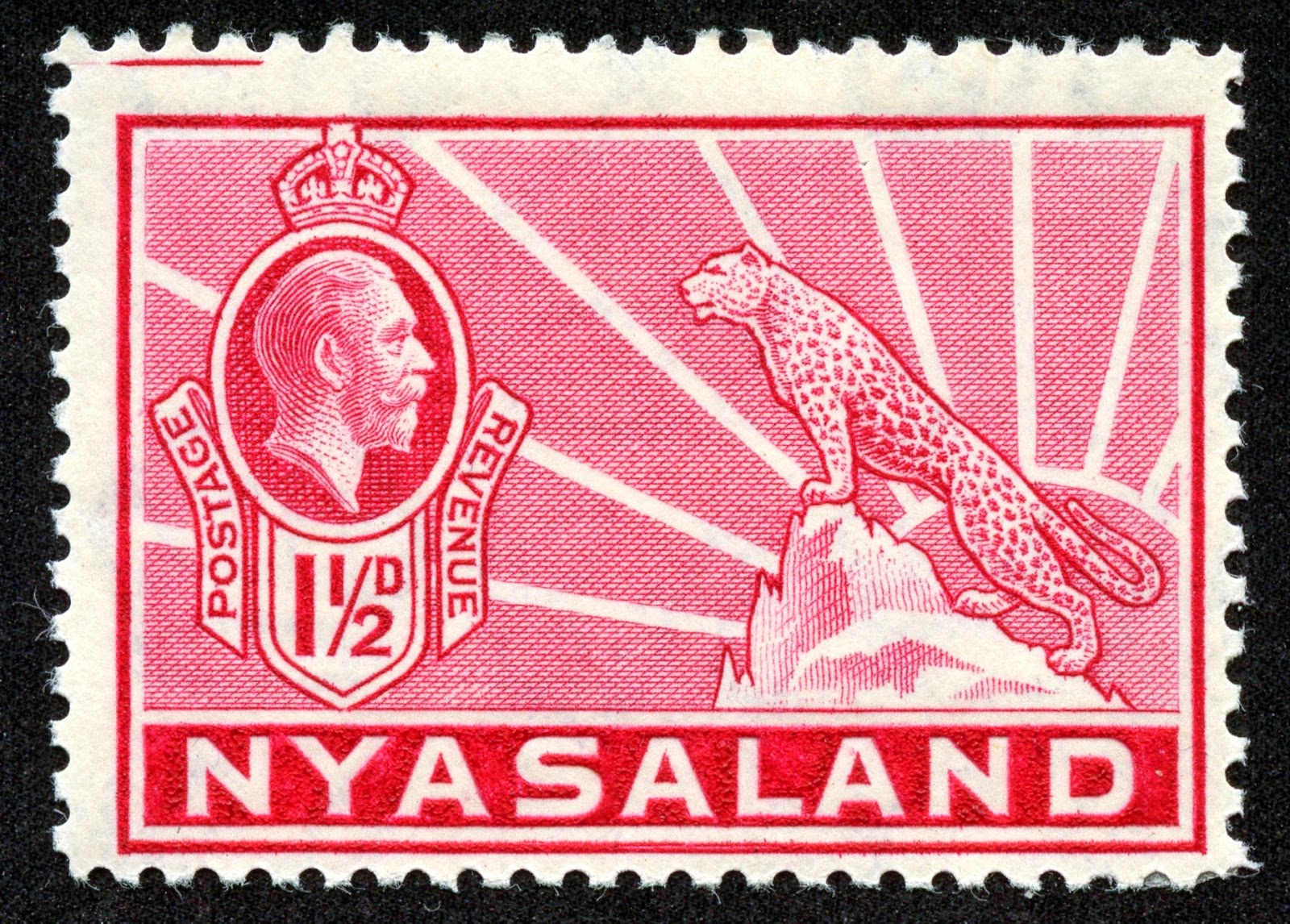 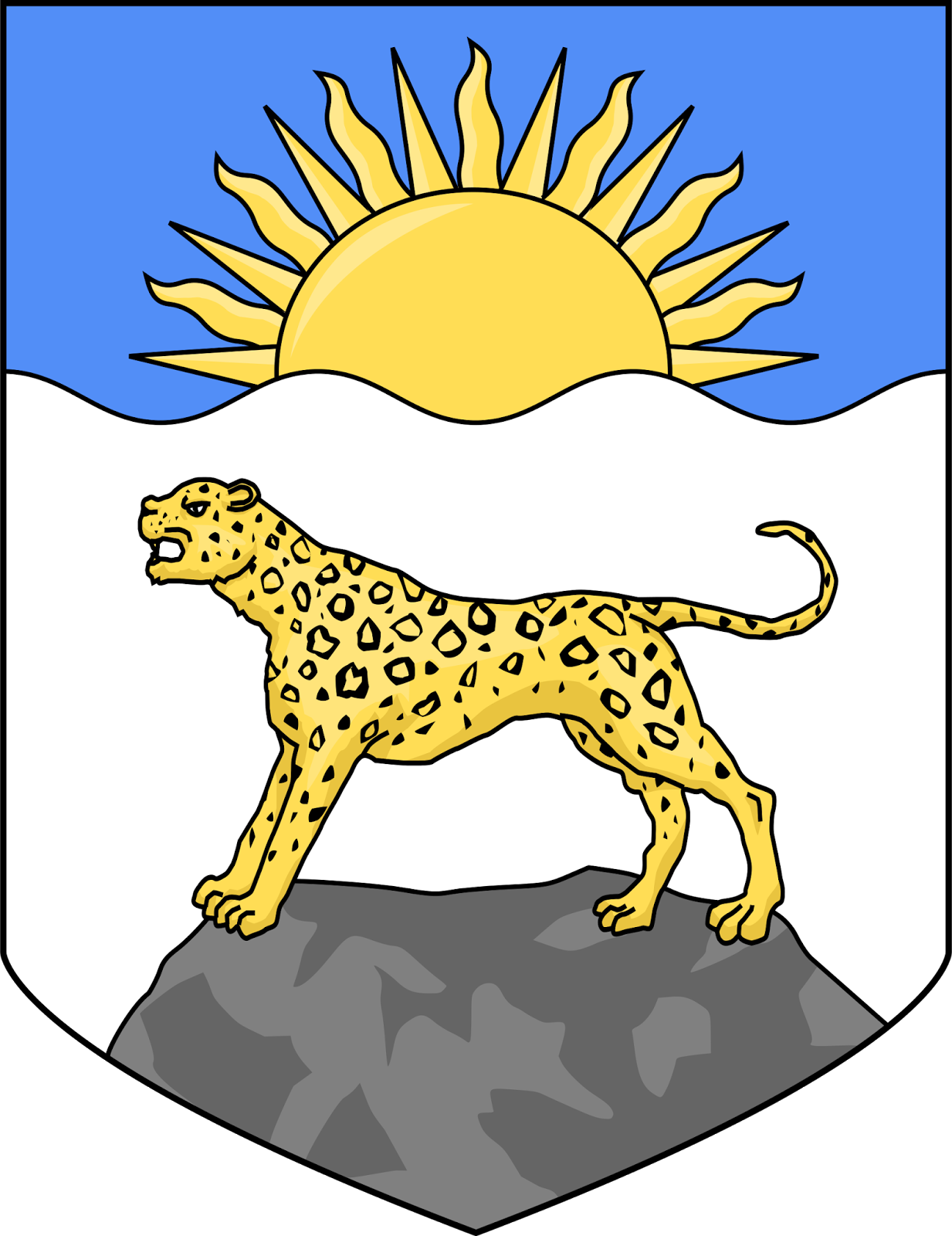 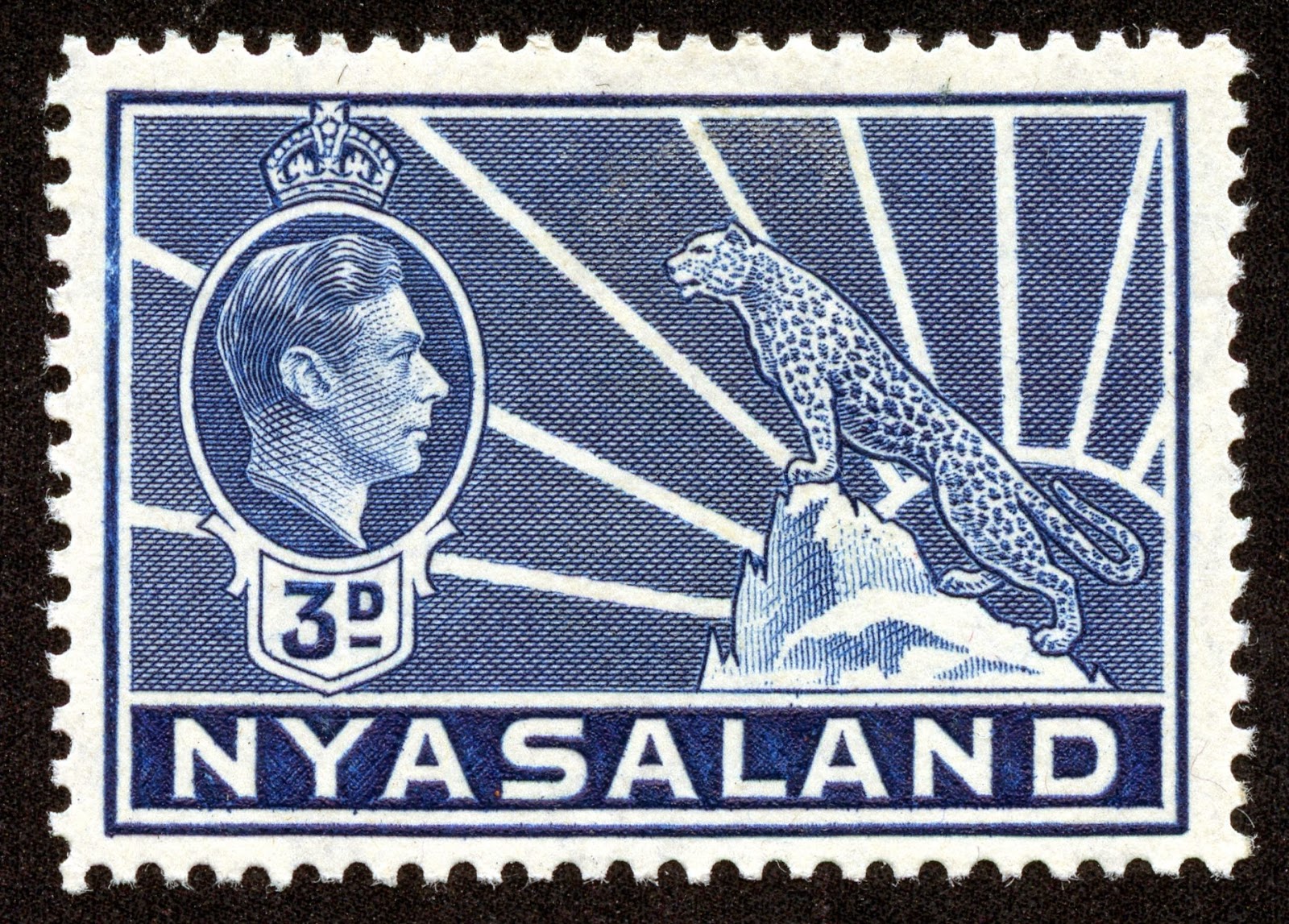 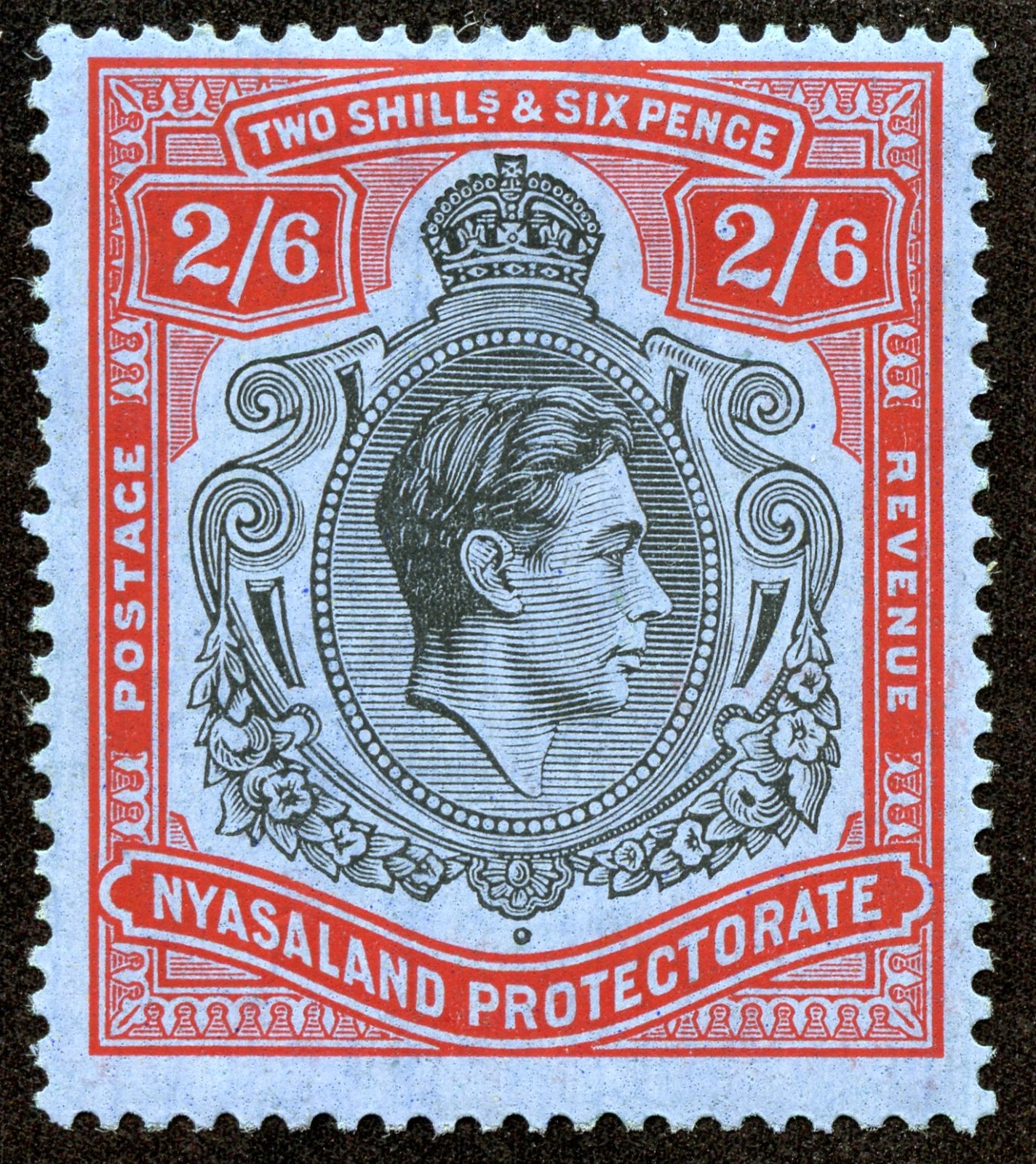 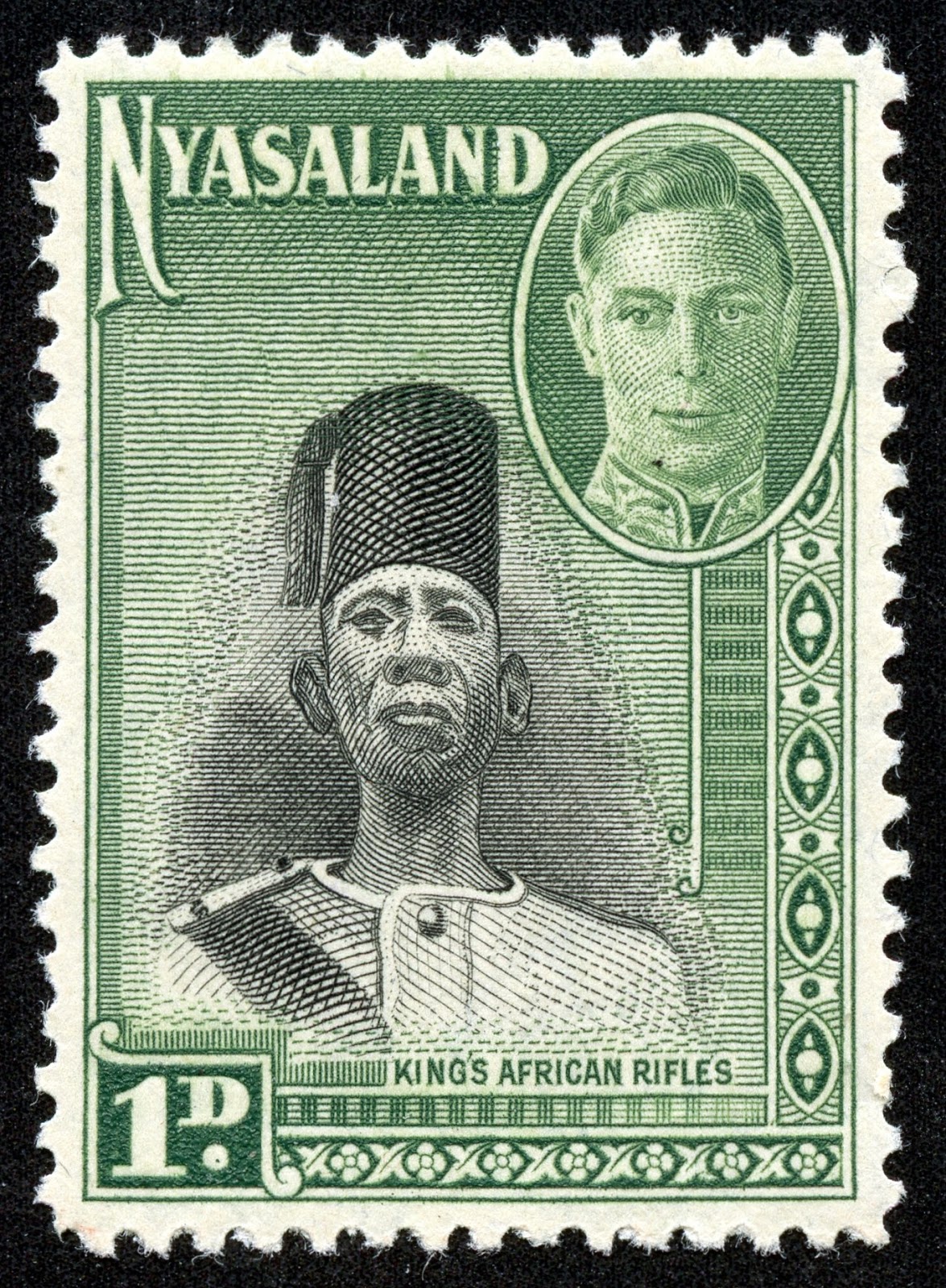 1945 Scott 69 1p deep green & black
"Soldier of King's African Rifles"
In 1945, a nice pictorial 14 stamp issue was produced. The 1p denomination shows a member of the King's African Rifles (KAR). These African battalions (with British officers) performed both military and internal security duties in east African colonial possessions. The 1st and 2nd Central African Battalions (1902-1963) were from Nyasaland, while other battalions were from Kenya, Uganda, and British Somaliland.


King's African Rifles War Memorial, Zomba, Nyasaland
The KAR battalions were active in WW I against the German forces in German East Africa (East Africa Campaign). At the end of WW I, there were 2,700 British officers and NCOs, and 31,000 Africans in the KAR. They suffered 5,100 casualties, with an additional 3,000 perishing from disease. 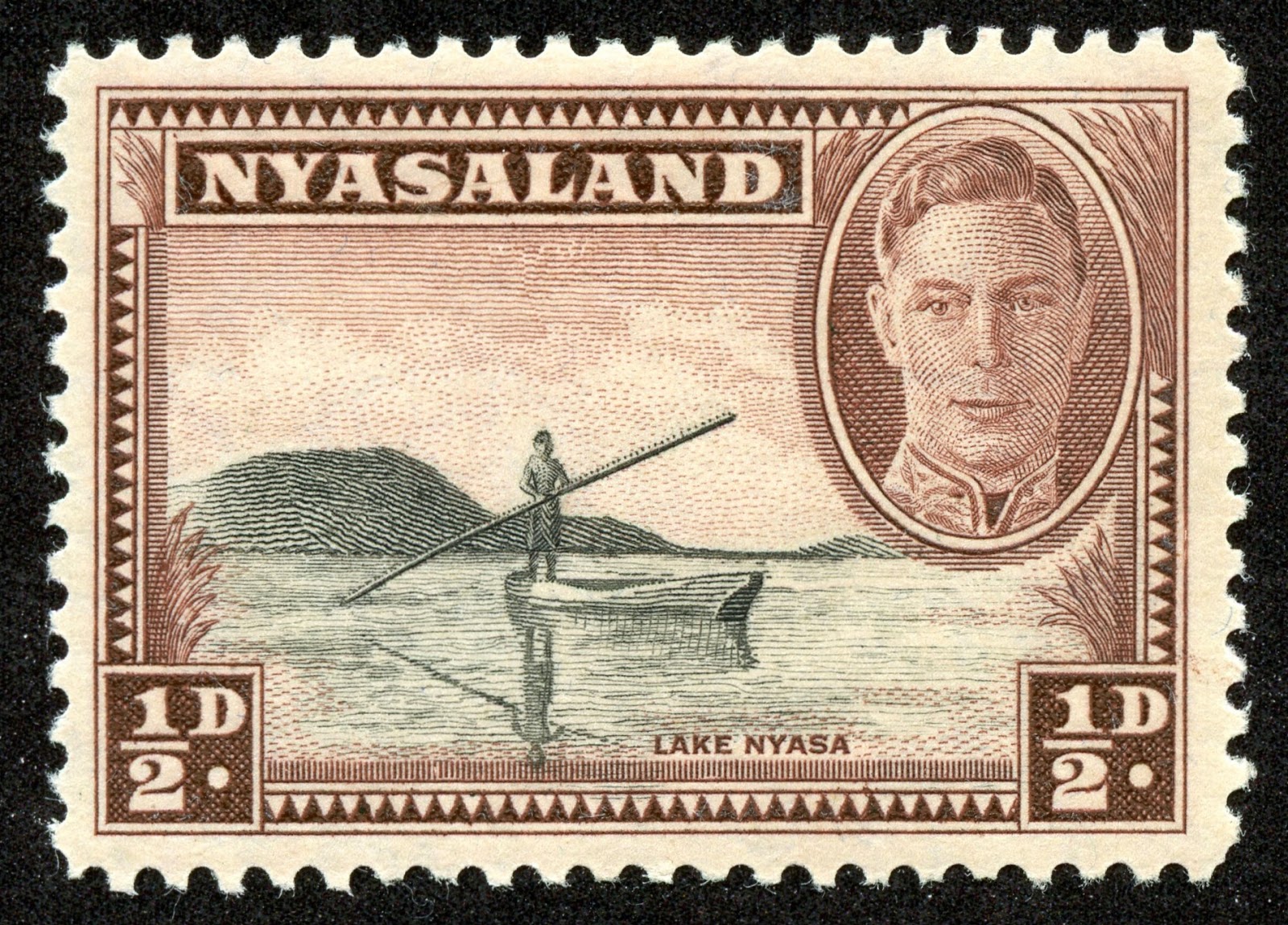 Lake Nyasa is 47 miles wide and 350 miles long, and is the ninth largest in the world. 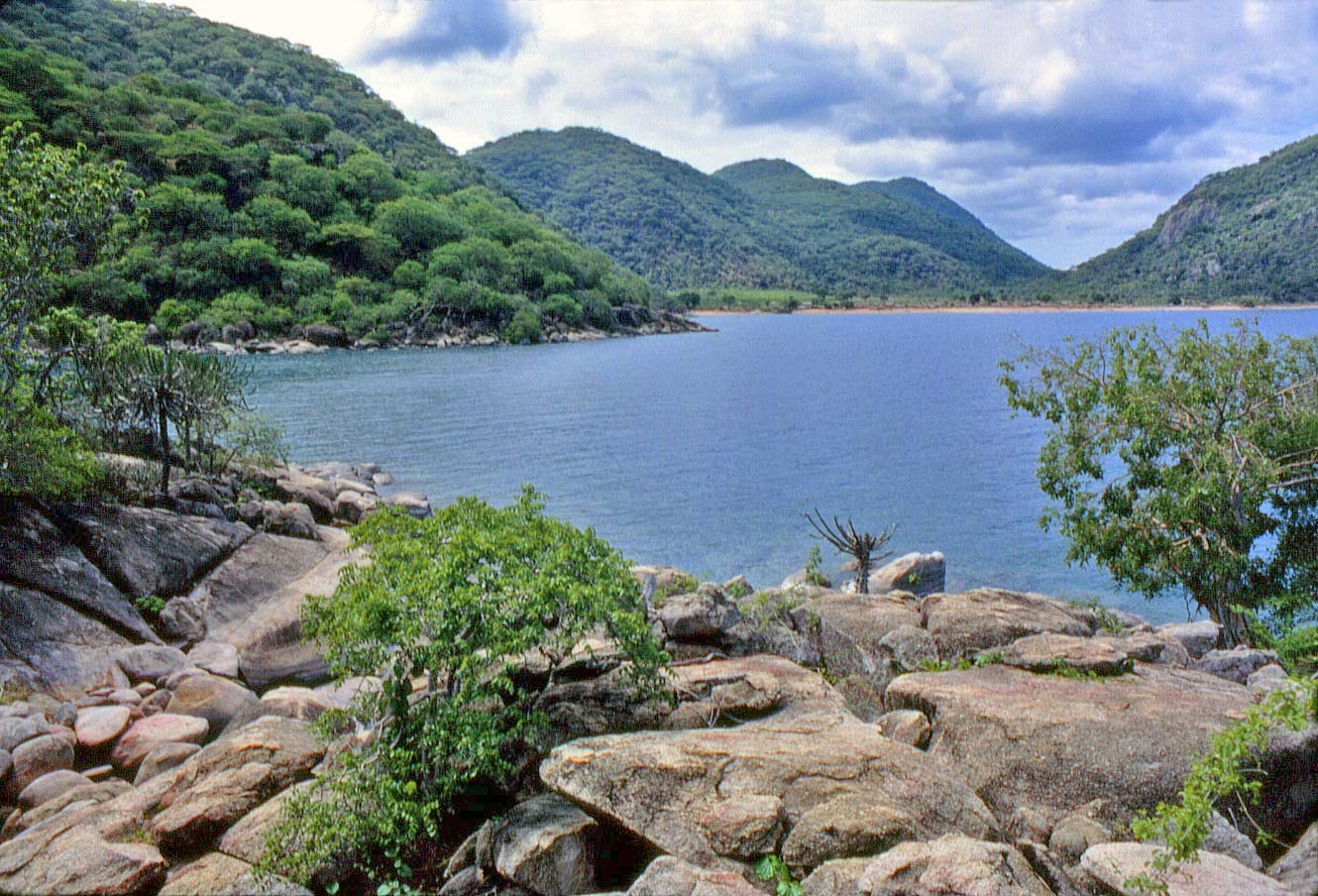 Lake Nyasa (Lake Malawi)
David Livingstone also called the lake, "Lake of Stars", as the lantern lights on the boats of the fishermen on the lake resembled such. 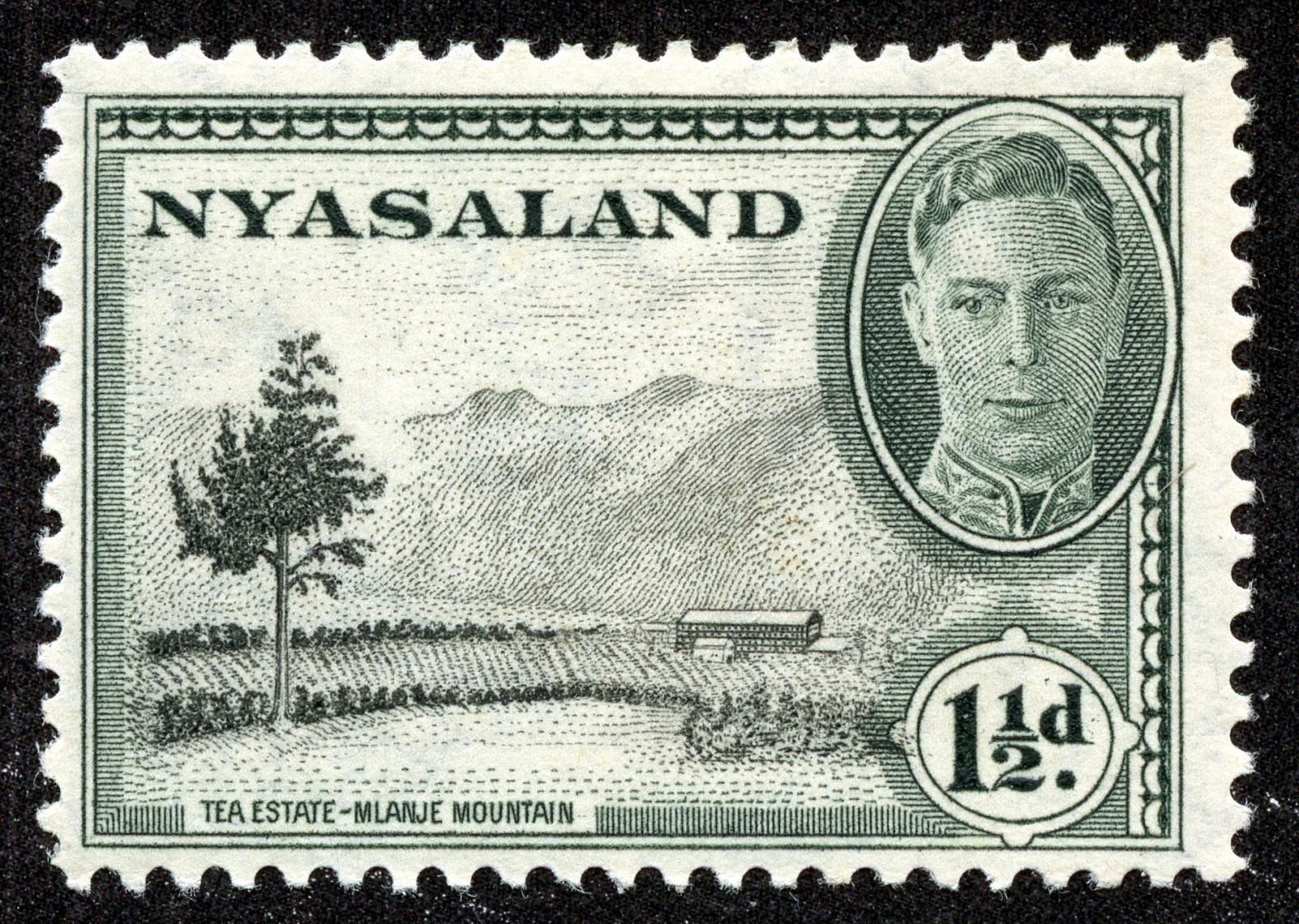 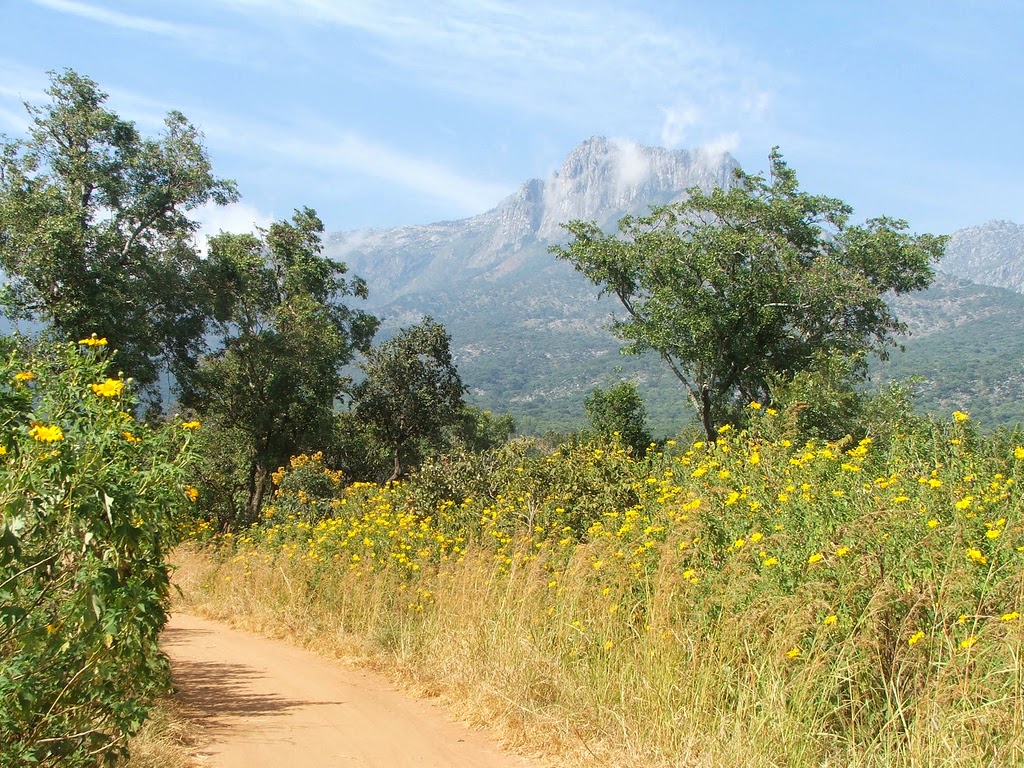 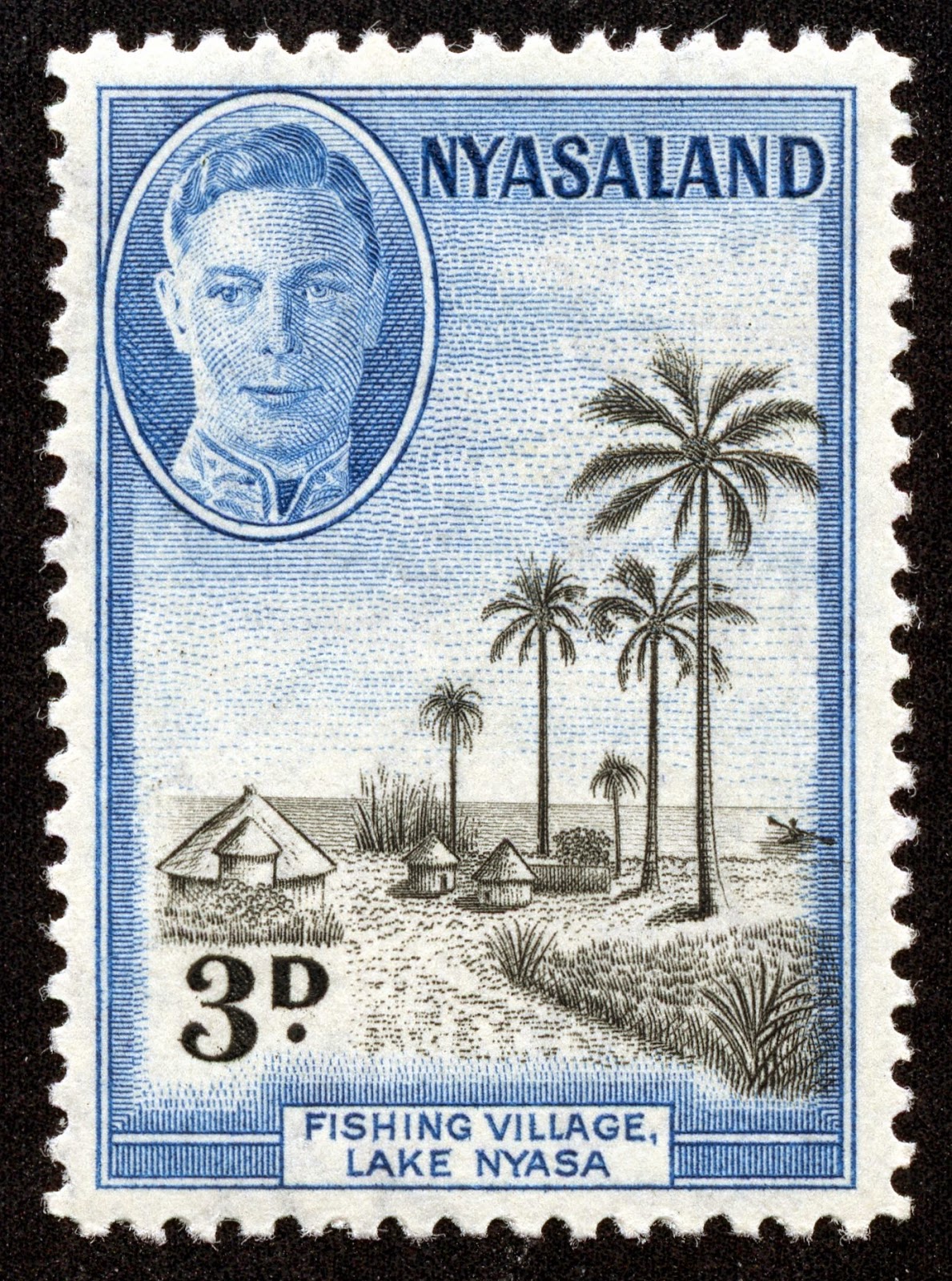 1945 Scott 72 3p blue & black
"Fishing Village, Lake Nyasa"
It is interesting that the Nyasaland  George VI  pictorial issue was produced in 1945. For virtually all the other colonial possessions, a George VI pictorial issue was released beginning in 1938. Perhaps it was scheduled, but had to wait until after the war? 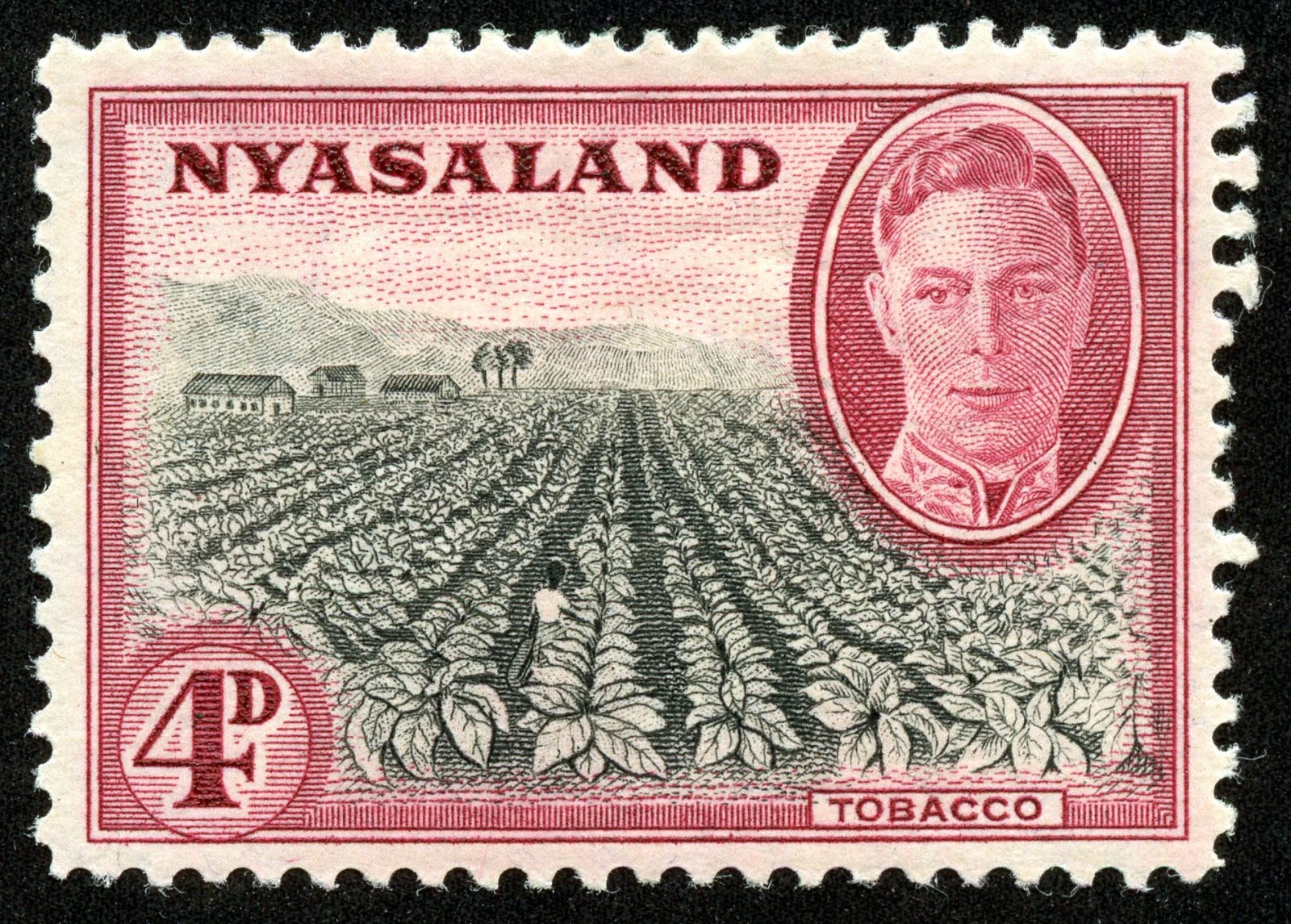 1945 Scott 73 4p rose violet & black
"Tobacco Estate"
Tobacco is still the main crop produced in today's Malawi. The country is the leading producer of the burley leaf tobacco, and the economy essentially depends on it's tobacco production. Lighting up a Camel or Marlboro? You are smoking blends of tobacco, including from Malawi. 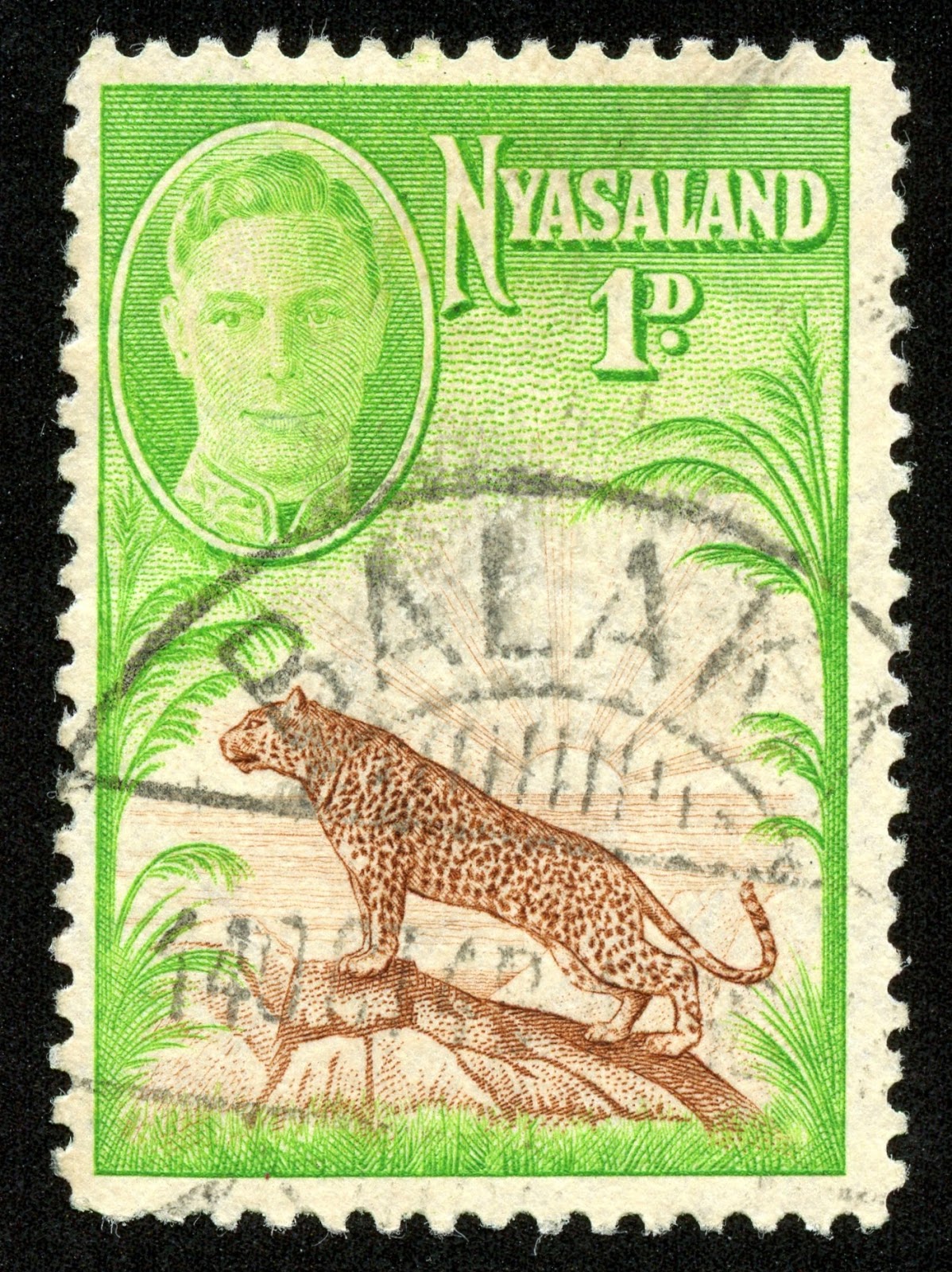 1947 Scott 84 1p emerald & orange brown
For reasons that are unclear, the 1p denomination was replaced in 1947 with this more nominal design. Still very lovely.

There are not many (any?) native leopards left in Nyasaland (Malawi). In fact, leopards have been recently reintroduced into the Majete Wildlife Reserve. 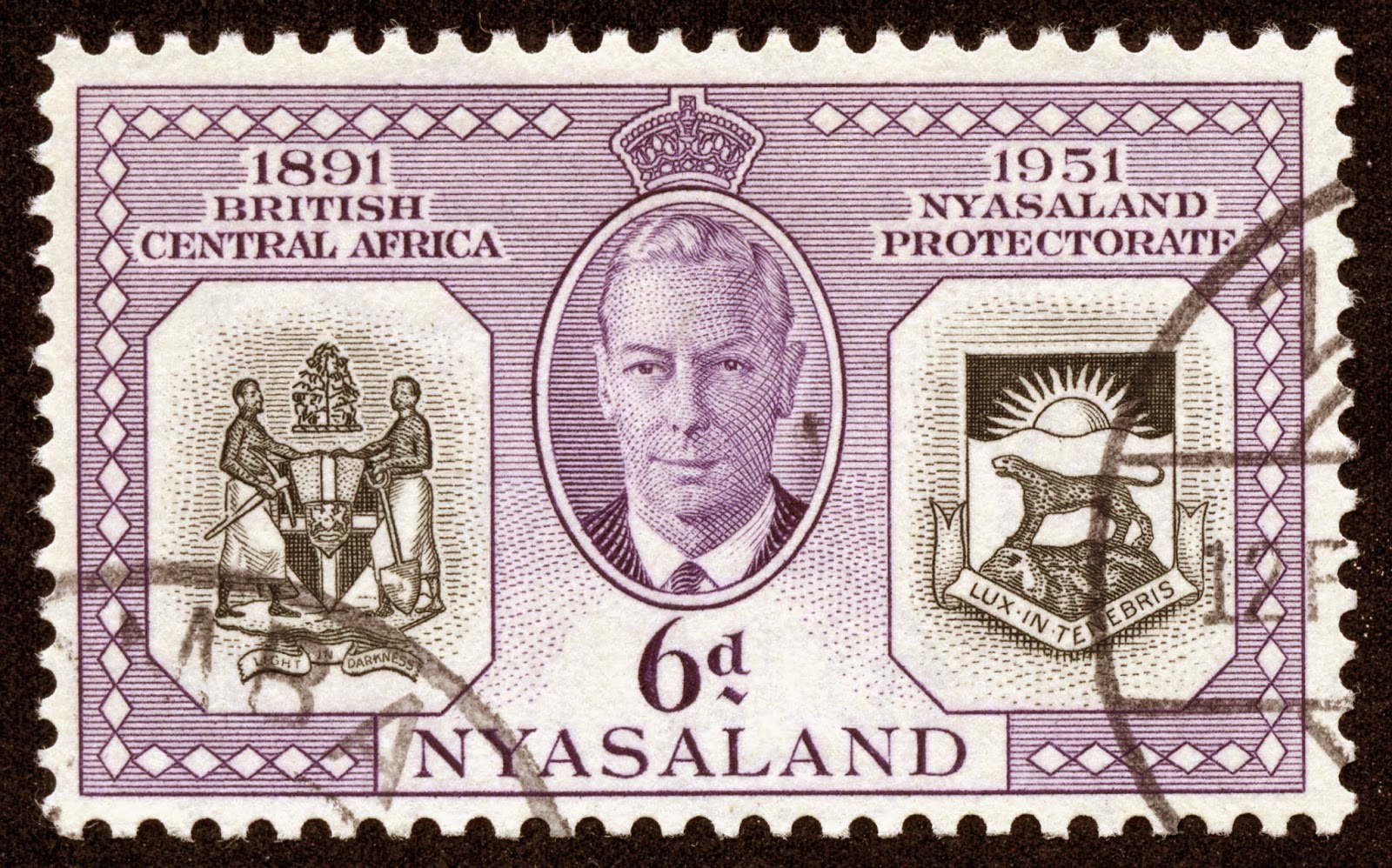 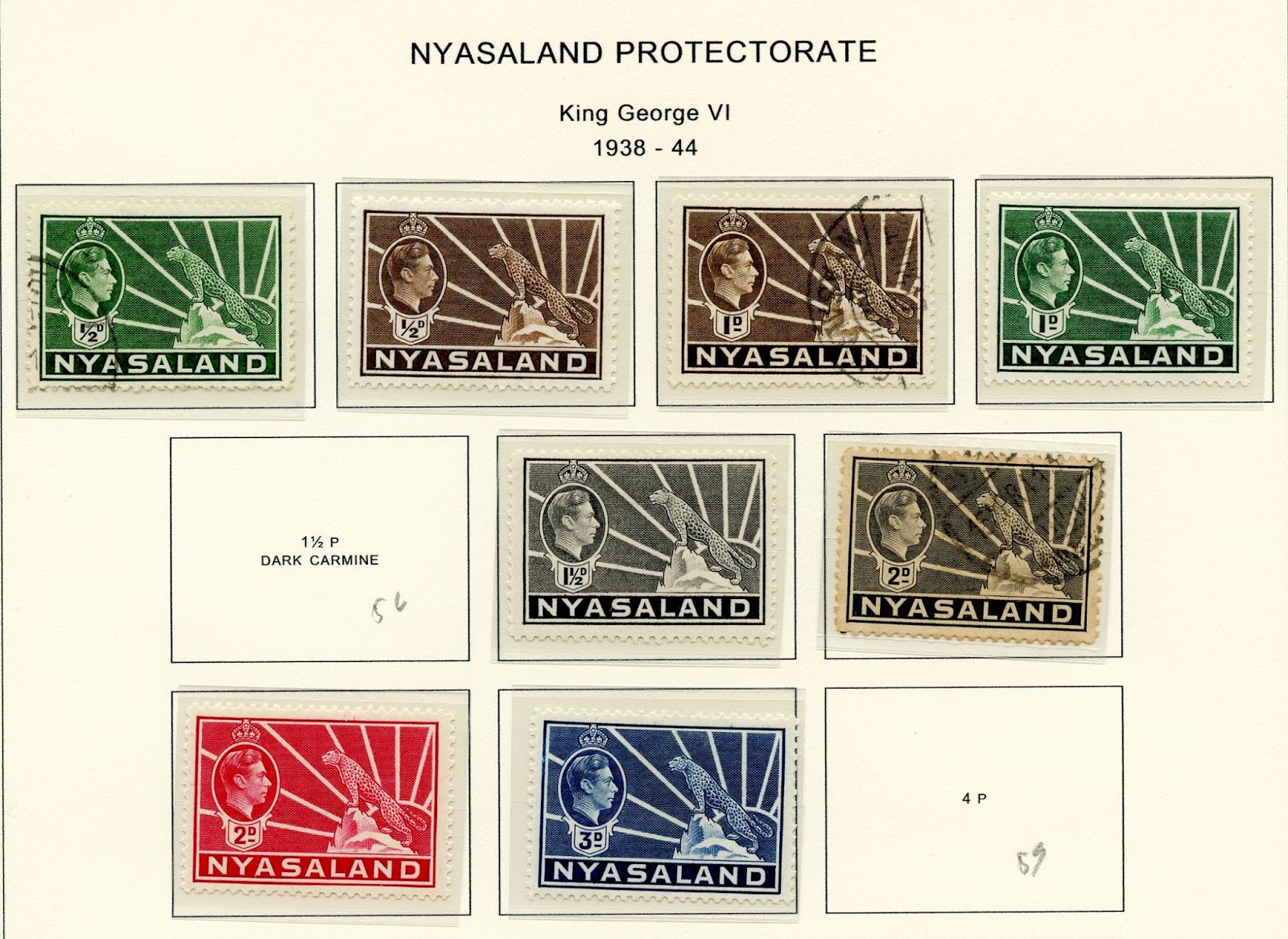 "1938-44 Issue in Deep Blue"
The Deep Blue album (Steiner) has 10 pages for the Nyasaland Protectorate, and covers through the George VI era (1951). All the major numbers have a space, and a couple of the 1913 1sh "George V" color variation minor numbers are also given a space.  Some 36 stamps were issued between 1940-51, which is more than usual for a British possession, and naturally there are spaces for them. 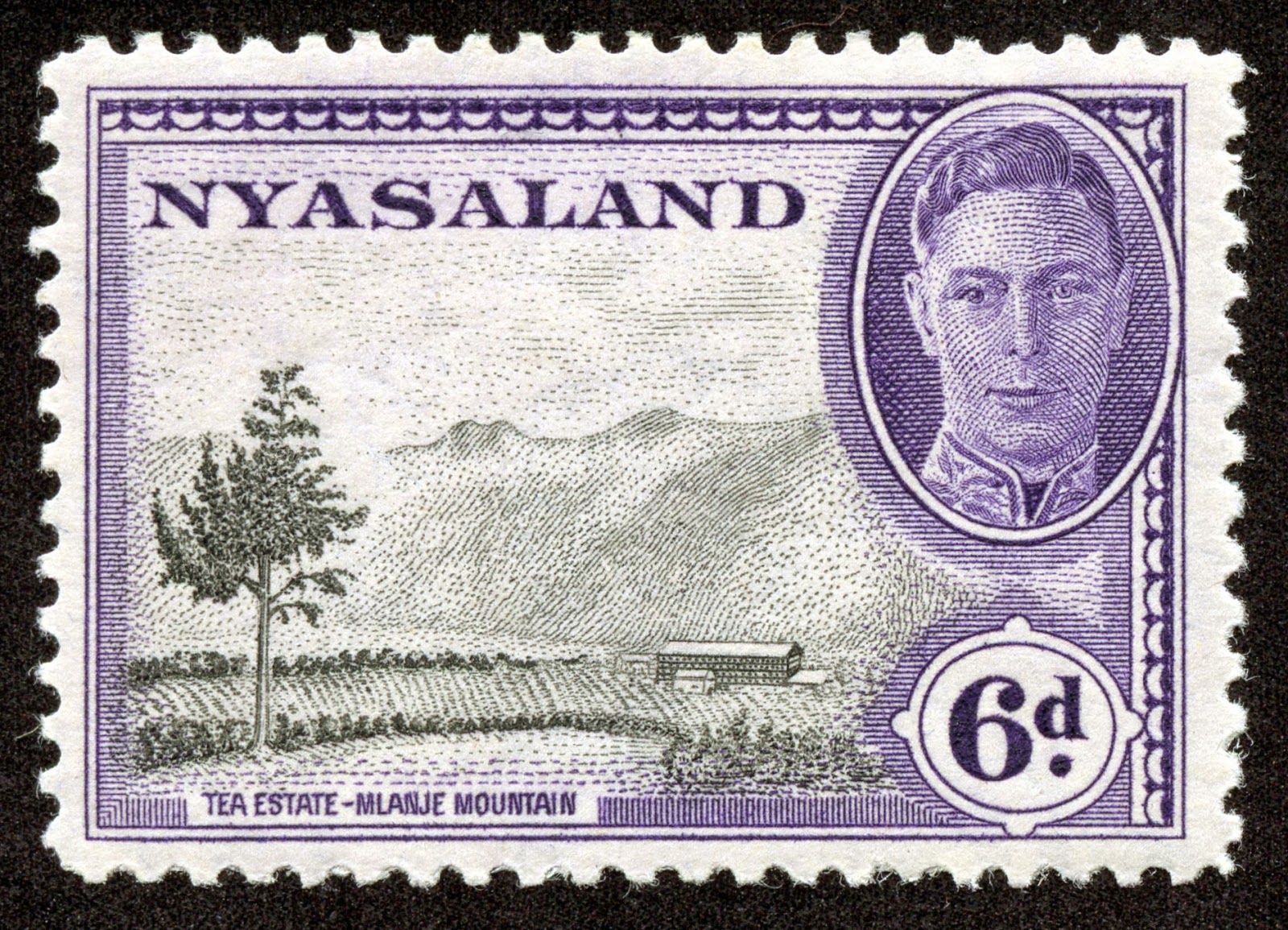 As usual, the George V definitive 1913-30 stamps, with two watermarks varieties ( wmk 3 and 4), are given only one space in BB. 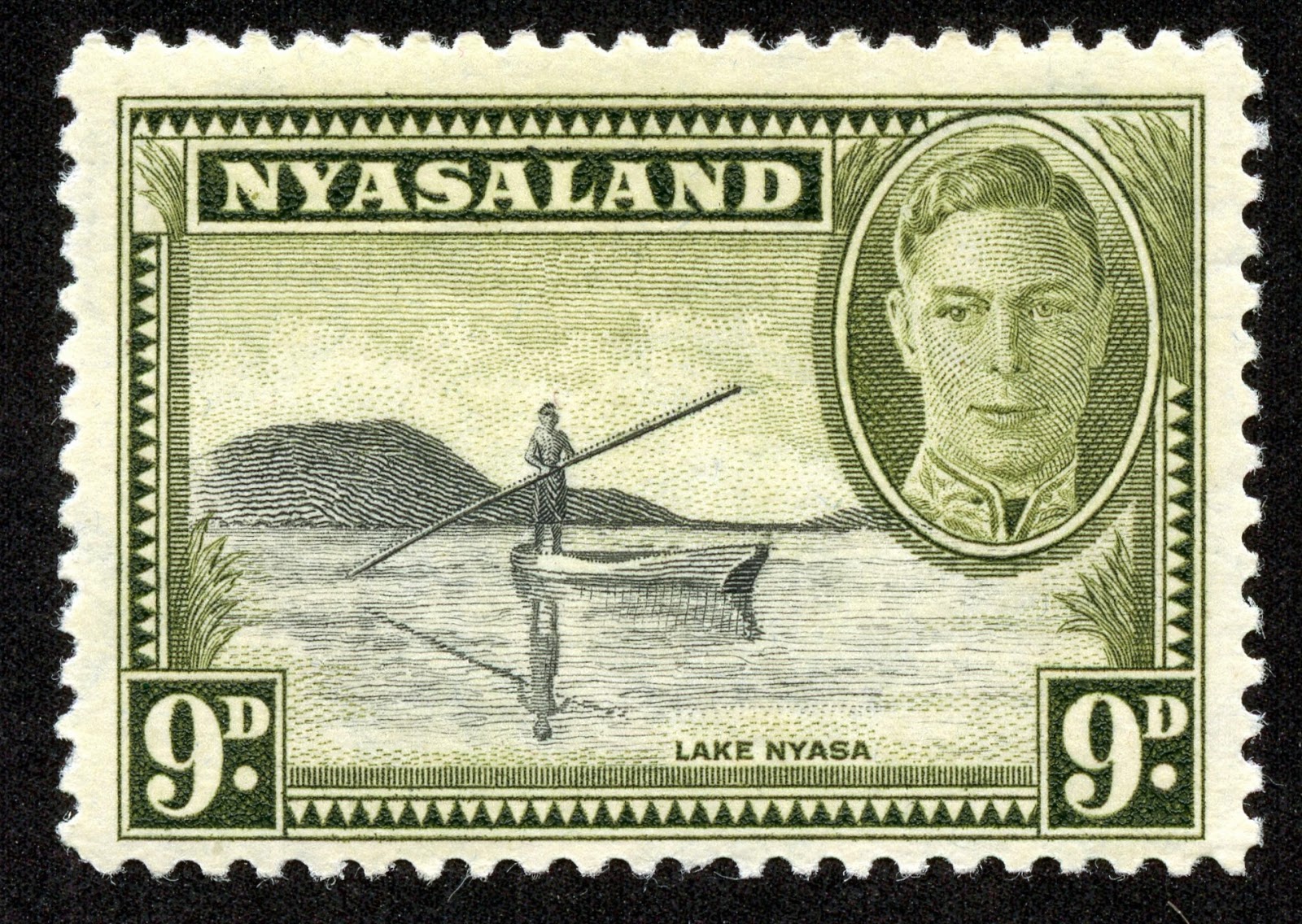 1945 Scott 75 9p olive green & black
"Canoe on Lake Nyasa"
Out of the Blue
The British were well aware of the Nyasaland area because of the published exploits of David Livingstone. Perhaps I too have become a bit more acquainted through the avenue and portal of stamps. ;-)

Note: Pics and map appear to be in the public domain.

Comments are appreciated!
Posted by Jim at 3:39 PM