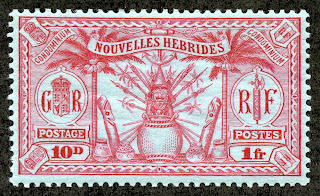 French 1925 Scott 52 1fr (10p) carmine/blue
"Native Idols"
Quick History
The New Hebrides islands (now the nation of Vanuatu) are located in the South Pacific 300 miles (500 kilometers) north of New Caledonia. The islands were colonized by both the British and French in the 18th century, and mirabile dictu, rather than fighting over the colonial spoils, an Anglo-French condominium was formed in 1906. 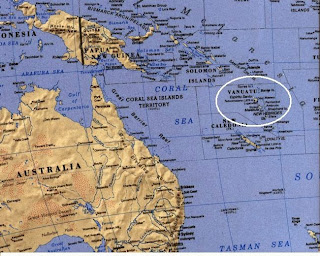 New Hebrides (Vanuatu) in the South Pacific
What the Condominium meant practically is that two separate communities- the British and the French- existed on the islands with their own language and schools.

New Hebrides (Vanuatu)
And the stamp issues have an interesting twist.

Initially, from 1908-1910, overprinted Fiji and New Caledonia stamps were used by the respective British and French communities. But, beginning in 1911, a joint issue was produced with the Coat of Arms design of both countries placed on either side of a "Native idols" central design. More joint issues were produced in 1925, 1938, and 1953.

The Condominium continued until 1980, when Vanuatu became independent ( although, even now, the French and the English communities maintain their own traditions and language). 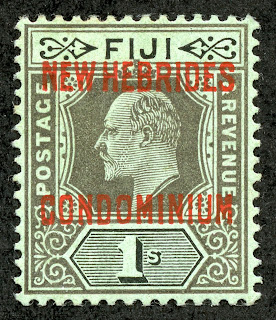 Of those, 25 of the British and 18 of the French stamps are CV <$1-$1+, or  26% total. Raising the bar to CV $3+, yields 33 more stamps. Overall, New Hebrides is somewhat more expensive befitting a  British or French colonial  territory.

We will review the British and French issues separately. 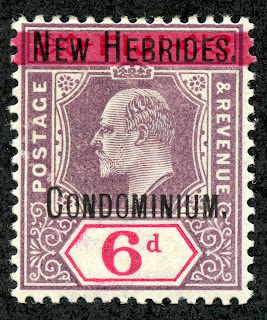 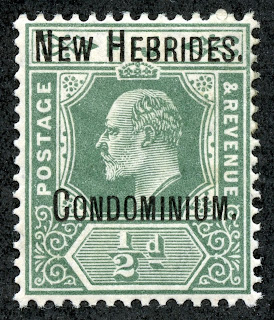 British 1908 Scott 7 1/2p gray green
Stamps of Fiji, 1903-06, Overprinted
Wmk Multiple Crown and C A ( wmk 3)
Three stamps of the 1908-09 issue are on British Colonial wmk 3 paper. (If you need to refresh the memory about Colonial watermarks, see the Gibraltar post.) 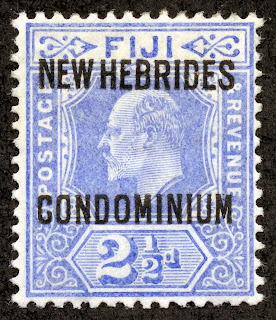 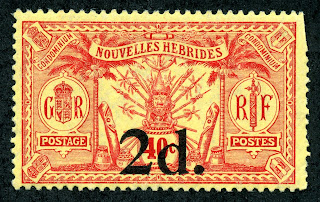 British 1921 Scott 30 2p on 40c red/yellow
On French 1911 Scott 16
In 1911, a joint issue was released. The British issue (10 stamps) naturally was scripted in English ("New Hebrides"), and had pence/shilling denominations. In addition, the "GR" for the UK was on the right side of the stamp, while the "RF" for France was on the left side. (I'm not showing an example of the issue here, but the differences between the joint issues should become clearer as the blog post is read.)

What I am illustrating here is what happened eventually- they ran out of certain stamp denominations after about 10 years of use, so had to surcharge remaining stamps.

In this case- in 1921- the British surcharged a French joint issue stamp for use in the English sector. Note the stamp has French script "Nouvelles Hebrides", the "GR" and "RF" are in reverse positions, and the denomination was originally in Centimes.

Of interest, the original French issue of 1911 can be found either with British Colonial wmk 3 " Crown and Multiple C A" (As the example above), or with a French watermark- "Wmk R F in Sheet". (Actually, only about 1/4 of the stamps in a sheet show the large double lined "R F" capitals: the rest show no watermark at all.) (I hope this will become clearer as the blog post progresses.) 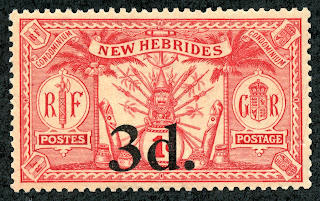 For comparison sake, here is an original 1911 British joint issue stamp that has been surcharged in 1924. Not all the characteristics of an English joint issue as outlined earlier.

BTW, this stamp is on colonial wmk 4 paper ( "Crown and multiple script C A"), while the other two 1924 surcharged stamps in this issue have watermark 3. ;-) 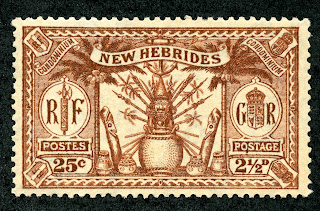 British 1925 Scott 44 2 1/2p (25c) brown "Native Idols"
In 1925, a new joint issue was produced: this time with both British and French denominations placed on the stamp. The British issue had nine stamps, while the French issue had eleven stamps.One could either buy a stamp with British or French funds. 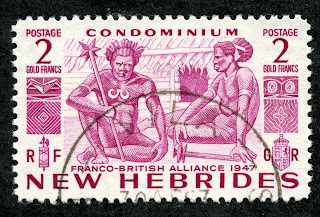 At any rate, the eleven stamp issue has three designs featuring local scenes: here, an "Island Couple". CV is <$1 for eight stamps. 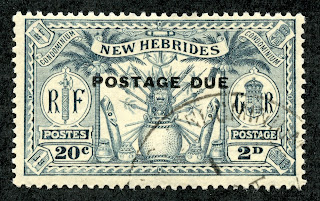 British Postage Due 1925 Scott J2 2p (20c) gray
Type of 1925 Overprinted
Besides regular issues, both the British and the French overprinted regular issues for use as postage due. 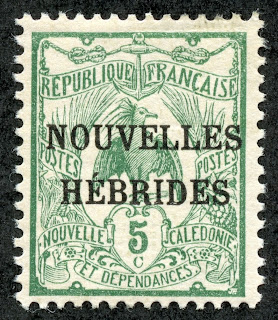 French 1908 Scott 1 5c green
Stamps of New Caledonia, 1905
Overprinted in Black or Red
In 1908, the French used their colony of New Caledonia as a source of stamps for New Hebrides. Five stamps were overprinted as illustrated. 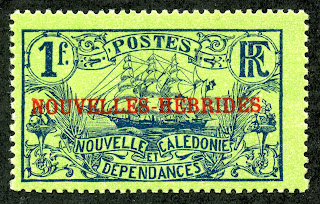 French 1908 Scott 5 1fr blue/yellow green
Stamps of New Caledonia, 1905,
Overprinted in Black or Red
Another example of the 1908 five stamp overprinted issue is shown above. CV ranges from $3+-$10+ for the issue. 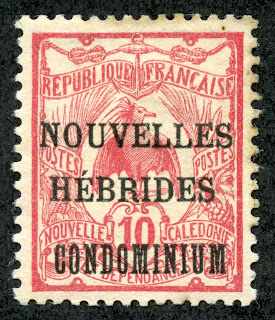 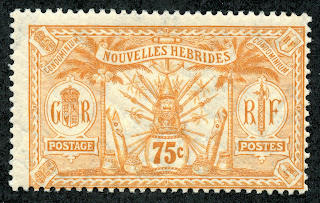 But the French issue is found with two watermarks; each a major catalogue number. Eleven stamps of French design can be found on British Colonial watermark 3 paper, as the example above. Yes, a "French" stamp with the "British Crown" watermarked on the paper. ;-) CV ranges from <$1-$4 for eight stamps. 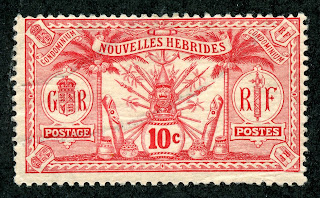 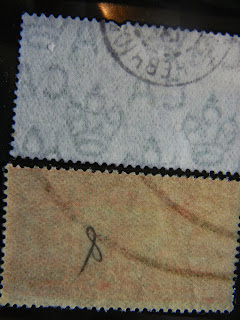 2011-12 French Joint Issue "Native idol"
Top: Wmk British Colonial 3 " Crown and Multiple C A"
Bottom: Wmk R F in Sheet
The watermarks for the French 1911-12 joint issue is shown here. Remember that the "Wmk R F in Sheet" will only appear on about 1/4 of the stamps in the sheet: the other stamps will have no watermark at all. 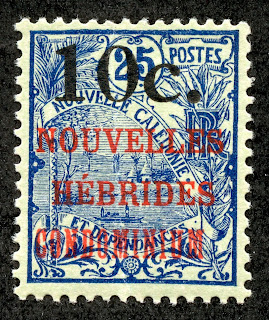 French 1920 Scott 34 10c on 25c blue/greenish
French New Hebrides 1910 Scott 8  surcharged
As mentioned earlier, by 1920 the Condominium was running out of the more popular stamp denominations, which required surcharging of previous issues. Here a 10c surcharge was applied to a 1910 stamp. 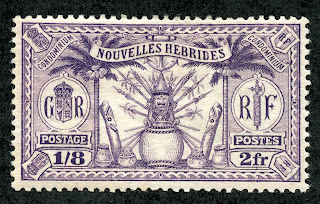 French 1925 Scott 53 2fr (1sh 8p) gray violet
Wmk R F in Sheet
In 1925, another issue was released in a joint format- this time with both British and French denominations listed on the stamp. Here is the French version. The eleven stamps have a CV ranging from <$1-$7. 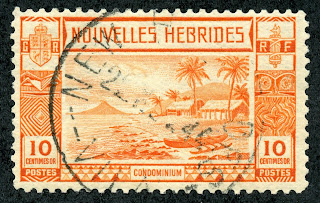 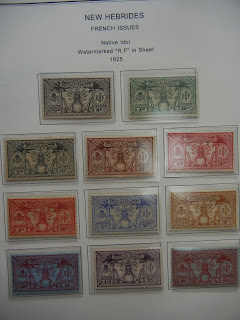 1925 French New Hebrides Issue in Deep Blue
Deep Blue (Steiner) has 16 pages for New Hebrides, and provides spaces for all the major numbers found in the Scott Classic Specialized catalogue. 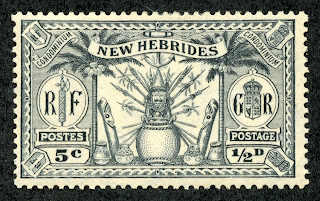 BB's layout provides spaces for the French variant, then the British type- back and forth. The French spaces number 29, while the British spaces are 18.

Unfortunately, BB provides no spaces for the earlier 1908-1910 British overprinted Fiji issues. I'm not sure of the reason, as they have approximately the same value as the French overprinted New Caledonia issues- which are given a space.

There are no stamps with CV $10 or higher. 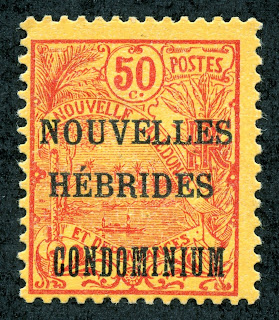 French 1910 Scott 9 50c carmine/orange
Stamps of 1908 with additional overprint
Out of the Blue
An interesting experiment in governing a country. It required three governments: one British, one French, and one joint administration. Fortunately, the joint administration was responsible for the postal service.