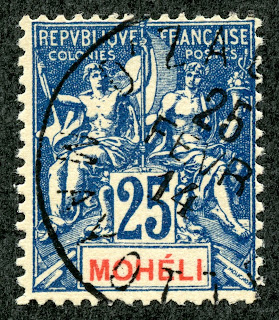 1906 Scott 7 25c blue "Navigation and Commerce"
Quick History
Moheli is one of the Comoro islands, and is situated between Madagascar and Mozambique off the coast of east Africa in the Mozambique Channel. A (tiny) French colony, Moheli issued stamps between 1906-1912. Moheli had a population of 4,000, and the Capital was Fomboni. 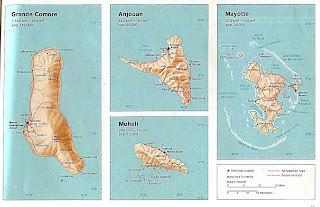 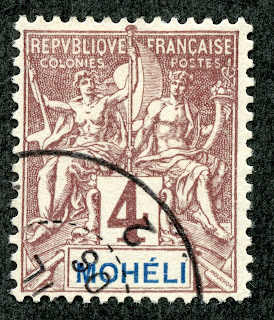 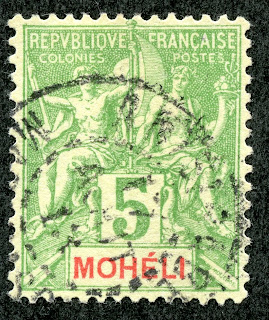 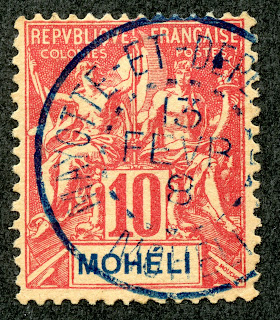 1906 Scott 10c carmine
The "Moheli" script can be found in carmine and blue. Note the "Mayotte et Dependances" cancellation? 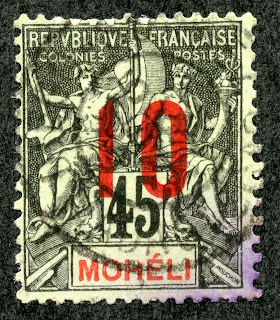 1912 Scott 21 10c on 45c black/gray-green
Carmine Surcharge
In 1912, stamps were surcharged (5c & 10c) in black and carmine as shown. These stamps could be used throughout the Comoros and Madagascar. The six stamp production has a CV of $2-$4+ for each stamp. There are minor numbers also with wider spacing between the surcharged numbers- be on the lookout for them, as their CV is higher. 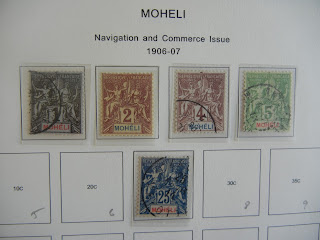 Moheli in Deep Blue
The Deep Blue album (Steiner) has Moheli on one page, and includes all the major Scott numbers. If one has any of the minor number 1912 issue with a wider space between the surcharge figures, one will need a quadrilled page. 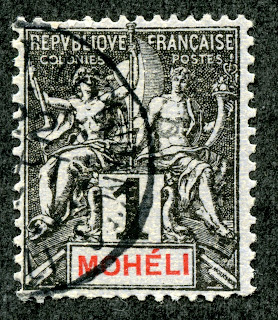 1906 Scott 1 1c black/lilac-blue
Big Blue
Update 1-2018: Moheli in the '69 BB is located on the bottom of the second page of Memel, across from the first page of Mexico. It is not listed in the '69 index, and therefore I missed it when I first published this blog post.
It is also located after Mexico and Modena in the 1940s editions. 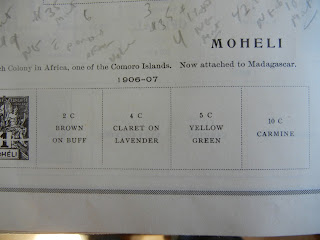 The coverage for Moheli is identical in the '69 BB, except the layout has two rows.

Coverage is fairly generous, and there are no expensive ($10 or higher) stamps. Since there is really no good reason why Moheli shouldn't be included, if one has a '69 or newer edition, perhaps an additional page might be in order. ;-)  I will add the Moheli checklist stamp numbers to the master Lebanon-Quelimane checklist. 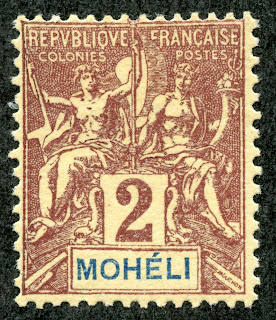 1906 Scott 2 2c brown/buff
Out of the Blue
Ask your non philatelic friends where Moheli (Mwali) is located. ;-)