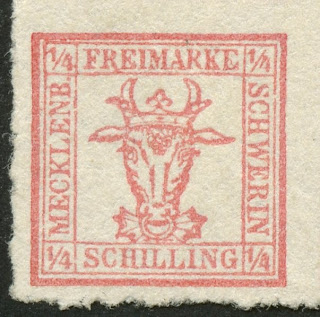 1864 Scott 5 1/4s red "Coat of Arms" , part of Block of Four
Close-up of 1/4s red
Quick History
The Grand Duchy of Mecklenburg-Schwerin was located by the Baltic Sea in Northern Germany, and bordered the Prussian Pomerania and Brandenburg provinces, and the Hanover province. It was held by the House of Mecklenburg residing at Schwerin. 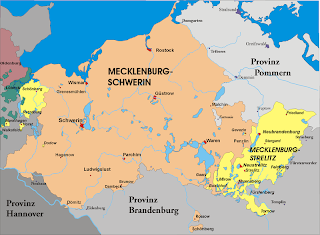 Mecklenburg-Schwerin
Other important cities in the territory include Wismar and Rostock. The lands became a Grand Duchy after the 1815 Congress of Vienna, when Grand Duke Frederick Francis I joined the just formed German Confederation.  ( His cousin Charles II from Strelitz did likewise. )

But the Duchy, surrounded by Prussia, was increasingly under Prussian influence, and joined the North German Confederation in 1867. The population was 670,000 at that time. 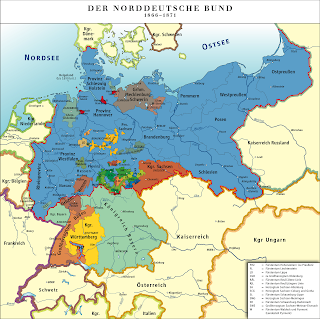 The Duchy had always operated as a feudal form of government (The Grand Duke was the executive branch!) until 1907, when Frederick Francis IV promised a constitution. In 1918, Frederick Francis IV also became regent of Mecklenburg-Strelitz. This was short lived, however, as the Grand Duke had to renounce the Mecklenburg throne during the upheaval after the German Empire defeat in WW I.

Subsequently, the Free State of Mecklenburg-Schwerin became a federated state within the Weimar republic. Clearly, the stamps are fairly expensive, but a small selection could be sought by the WW classical collector if interested.

A closer look at the stamps and issues
48 Schillings = 1 Thaler
The two imperforate designs introduced in 1856 show part of the Coat of Arms: More specifically a Bull with a Crown. This bull, however, looks nothing like the ferocious Brahma bulls I've seen at western rodeos: but rather a gentle, almost effeminate species. Most interesting! 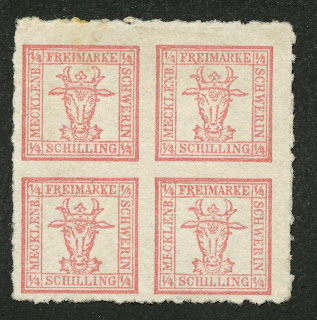 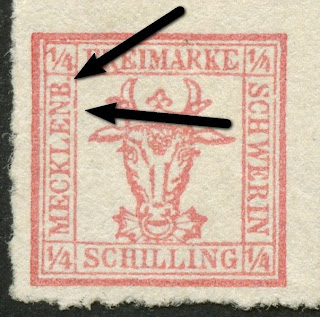 Genuine vs Forgery
Well, almost every early German State stamp can be found with forgeries -what about Mecklenburg-Schwerin?

Fortunately, I have a copy of the G erman Philatelic Society manual (in CD form) on German States forgeries. The Scott 1 (1856), Scott 4 (1864), and Scott 5 (1864-shown above)- all with similar designs- share five reported forgeries.

But the Genuine can be identified from the five listed forgeries- including a Fournier (Forgery I)- by these signs (see arrows).....
• The dot or period after the "B" in the upper left panel is always present in the genuine, and is clear of the horizontal line above.
• There is a break in the line under the "N" in the genuine- not seen with the forgeries.

Update Note: There is a superb review of genuine/forgeries by Falschung here. 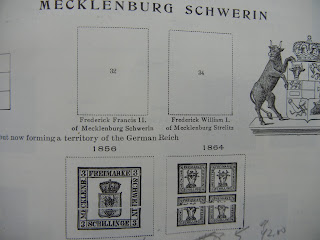 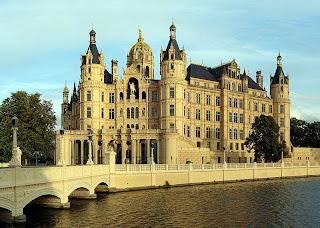 The Schwerin Castle
Out of the Blue
I really like these stamps. If I wasn't already committed to collecting the world, I would give serious consideration to just concentrating on the German sphere. ;-)

Note: Maps, Coat of Arms and Castle pics appear to be part of the public domain.