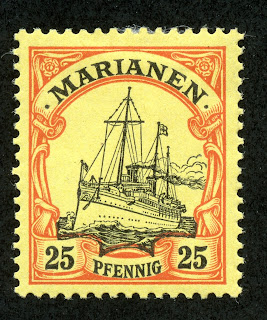 1901 Scott 21 25pf orange & black/yellow
Kaiser's Yacht "Hohenzollern"
Quick History
The Mariana Islands are an archipelago of 14 volcanic islands in the west Pacific Ocean north of Guam extending 1,500 miles (2,500 km) toward Japan. Saipon, Tinian, and Rota are inhabited currently, and the archipelago is now a Commonwealth of the United States.

Map of Mariana Islands
But Spain had the original claim in 1667, naming them after the Spanish Queen Mariana of Austria. The Marianas- including Guam- were a Spanish colony, under the administration of the Philippines, until the Spanish-American War, when Guam was ceded to the United States. Then, in 1899, Spain sold the remaining islands to Germany.

Germany administered these islands as part of the German Protectorate of New Guinea. The population of the islands was only 2,600 at the time.

As part of WW I, Japan occupied the islands in 1914. They then became mandated territories to Japan under the League of Nations after WW I.

Guam was attacked from the Japanese held Marianas on December 8, 1941, the same day as the attack on Pearl Harbor. Guam was recaptured by the Americans in 1944.  Saipan and Tinian were then occupied, and used extensively for round trip bomber missions to mainland Japan. The Enola Gay left Tinian's "North Field" for its atomic bomb mission to Hiroshima.

The classical era philatelic history, though, is of Spanish and German issues, beginning in 1899. Let's take a look... 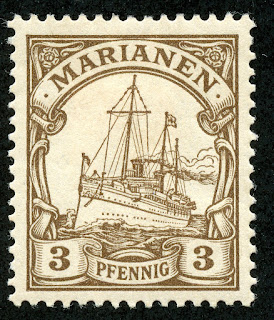 1901 Scott 17 3pf brown
Into the Deep Blue
The 2011 Scott Classic Specialized catalogue has 6 major descriptive numbers for the 1899 handstamped (Spanish Dominion) Philippine issue, and 21 major numbers for the 1900-1919 German issues.

• The 1899 six King Alfonso XIII stamps of the Philippines, handstamped vertically, are major league CV expensive. CV $300+-$5000. And there are overprint forgeries. ;-) I will say no more about them, except I became aware of a philatelist on one of the internet forum groups that specializes in these stamps and covers. Nice!

• The German issues (21 major numbers) have a CV of $1+-$10+ for 16 stamps. Consequently, a representative collection can be acquired by the WW classical collector for a moderate outlay. Naturally, the unused stamps are significantly less expensive than genuine used copies. 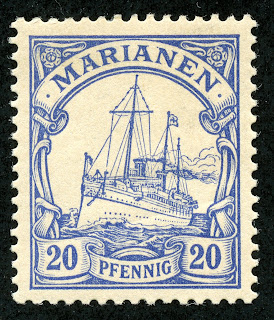 1901 Scott 20 20pf ultramarine
Kaiser's Yacht "Hohenzollern"
The issue I do have is the 1901 "Hohenzollern" design, which is essentially found for all German colonies. This 13 stamp issue comprises most of the affordable CV stamps for the Marianas, having a CV of $1+-$3+ for 10 stamps unused. 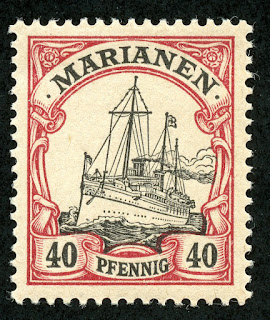 1901 Scott 23 40pf lake & black
The 25pf-80pf denominations are bi-colored printed, and certainly have visual appeal. The 1m-5m denominations are engraved, in larger horizontal format, and have a CV of $3+-$7+ for three stamps.

I should mention that there is also a 1916-19 3pf brown and a 5m slate & carmine with watermark "Lozenges" known, but these stamps were never placed in use. 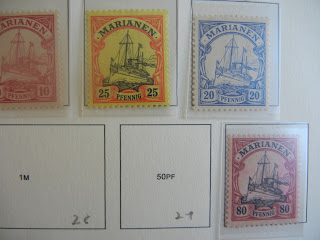 The 1901 set in Deep Blue
The Deep Blue album (Steiner) has two pages: One for the Spanish dominion 1899 issue, and one for the 1900-19 German issues. The uber-expensive minor number 1899 48 degree angle overprinted stamps are not given a formal space, thank goodness. ;-) 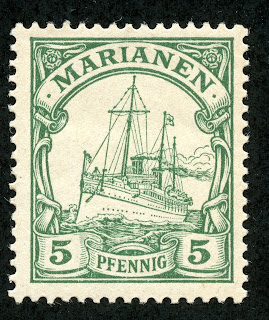 1901 Scott 18 5pf green
Big Blue
Big Blue '69, on two lines of one page, has a representative collection of 13 spaces, including three spaces for the overprinted 1900 issue. Nice! BTW, the page is found after "Macao", and before "Madagascar" in the '69. 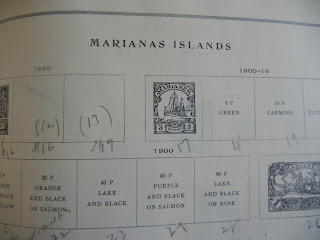 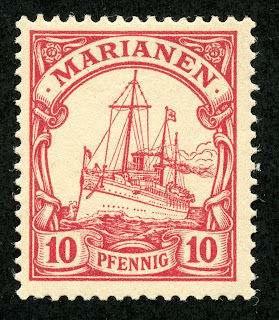 1901 Scott 19 10pf carmine
Out of the Blue
Here the history of the Marianas during WW II, even if the islands remain obscure for most, is of much more importance than the classical stamp issues of the Spanish Dominion and the German era.

And how many people realize that the present 50,000 inhabitants of the Northern Mariana Islands are U.S. citizens? ;-)

Note: Map, island pic appears to be in the public domain. 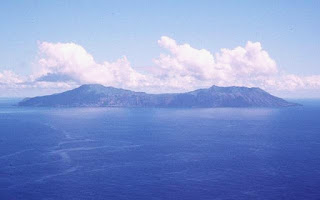