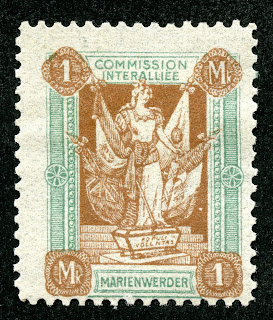 1920 Scott 11 1m brown & green
Allegorical Symbol of Allied Supervision of Plebiscite
Quick History
After the defeat of Germany in WW I, the Versailles Treaty specified that much of the Province of Posen and of West Prussia be ceded to Poland. Poland, then, would have a corridor to the Baltic Sea via access to the Free Port City of Danzig (Gdansk). 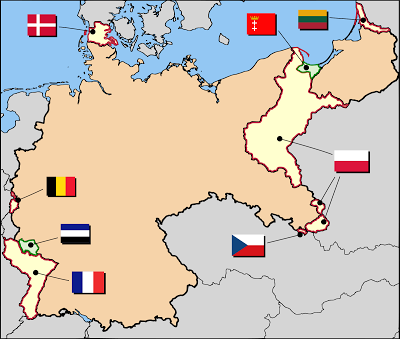 German Territorial Losses after WW I
Note Poland gained a large strip of land- and Baltic Sea access
This was decided without a plebiscite (vote). But some territories, namely Alleinstein in East Prussia, and Marienwerder in West Prussia, because of a vocal German population, and the sympathies of the British Prime Minister Lloyd George, were allowed  to vote whether to join Poland or East Prussia (Germany). 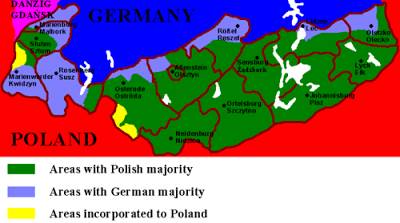 The Plebiscite Territories with German/Polish majorities indicated
West end of Map: Marienwerder (Kwidzyn) is located 50 miles south of Danzig
The Plebiscite was scheduled for July 11, 1920. It was sponsored by Inter-Allied Commissions for the League of Nations. British and Italian contingents were on the ground, but civil administration was handled by the Germans.

(Note: For a superb map of the German land losses 1919-21, and another view of the Allenstein/Marienwerder Plebiscite lands, see Michael's Dead Countries Stamps website for Allenstein. Thanks Michael!)

Naturally, the plebiscite was promoted and publicized through the use of stamp issues. 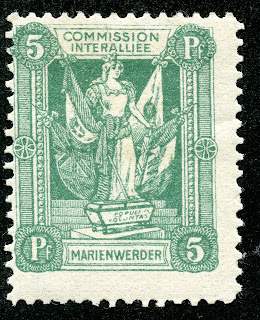 1920 Scott 1 5pf green
Into the Deep Blue
The 2011 Scott Classic Specialized catalogue has 42 major stamp descriptions for Marienwerder. Of those, 19 are CV <$1-$1+. Clearly, a modest collection can be accumulated. 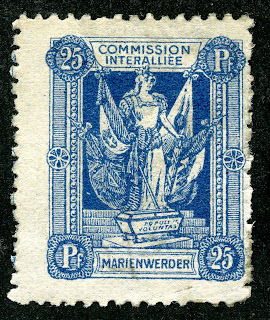 1920 Scott 5 25pf deep blue
Allegorical Symbol of Allied Supervision of Plebiscite
The first 14 stamp issue was produced beginning in March, 1920, and had this striking allegorical design with  "Commission Interallièe" and "Marienwerder" scripted on the top and bottom of the stamp respectively. The CV is <$1-$2+ for 12 stamps, all less expensive for unused. 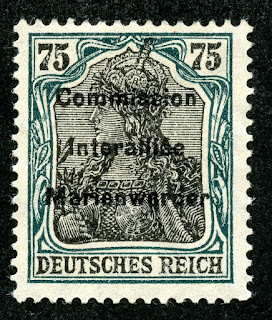 There are two more four stamp overprinted German issues produced in 1920: but, alas, I do not have them. 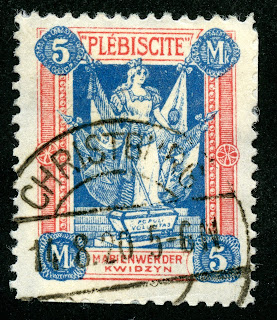 1920 Scott 53 5m blue & rose
Second Plebiscite Issue of 1920 with Allegorical Symbolism
In July, 1920, another 14 stamp issue was released; this time with "Plebiscite" and "Marienwerder/Kwidzyn" script. CV ranges from <$1-$1+ for 9 stamps. The 5m blue & rose above has a town cancel I cannot find for the Marienwerder region, and it appears to have been cancelled in August, 1920, after the plebiscite. ;-) 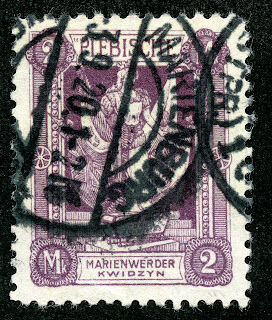 1920 Scott 51 2m dark violet
Almost all of my collection is unused, but here is another used specimen. Marienburg is a real town in the Marienwerder region, but this stamp appears to have been cancelled in September, 1920. ;-) 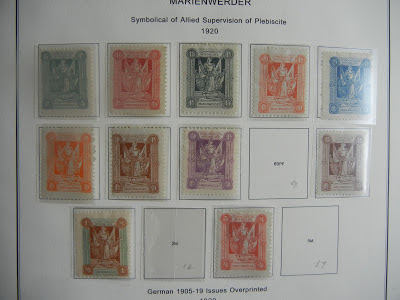 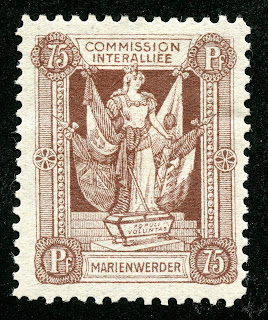 1920 Scott 10 75pf chocolate
Big Blue
Big Blue '69, on two lines of one page, has six spaces for the first allegorical plebiscite issue, and six spaces then for the second issue. 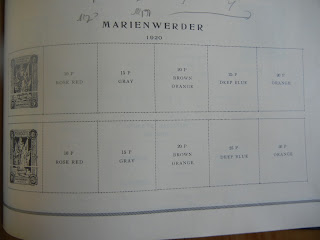 Observations...
• The second allegorical plebiscite issue yields two CV $10+ stamps in BB.
• I found some nine stamps CV <$1-$1+ that are not in BB.
• Still, I'm appreciative that Marienwerder has spaces allocated, and was not among the countries purged by the '69 editors. ;-) 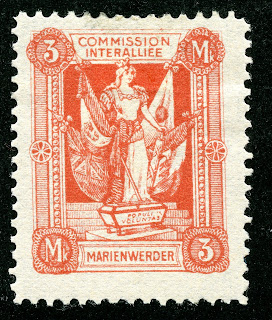 1920 Scott 13 3m red
Out of the Blue
Poland, of course, ultimately "won", as the lands became part of that country after WW II.

Note: Maps, "Kwidzyn" pic appear to be in the public domain. 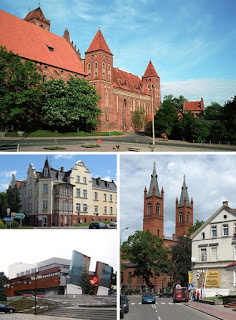