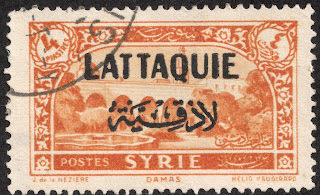 1931-33 Scott 14 4p orange , overprinted
On stamp of Syria , Design A14 "Square at Damascus"
Quick History
Latakia is the major port city now in Syria, but after WW I it was part of the Syrian Mandate to France. Latakia became the capital of the territory, and then the State (1923) of the Alaouites (Alawites). 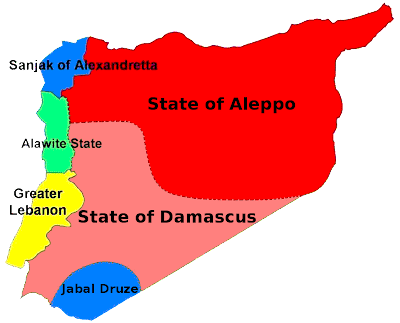 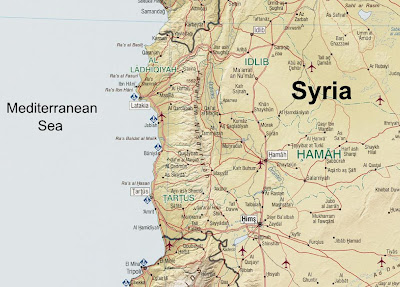 In 1937, the territory was absorbed fully into Syria, and stamps of Syria without overprint were subsequently used. 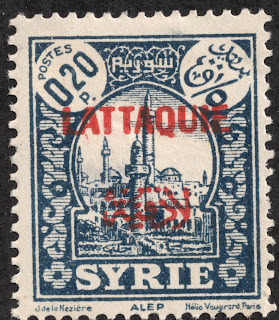 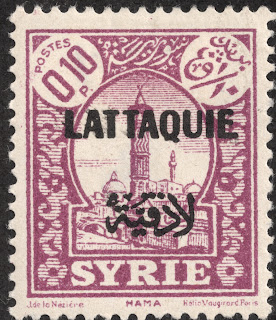 1931 Scott 1 10c red violet, overprinted
"View of Hama"
The 1931-33 issue has 22 stamps, and used Syrian stamps which are then overprinted as illustrated. The 10c red violet denomination (above) was also issued in a violet brown color in 1933. 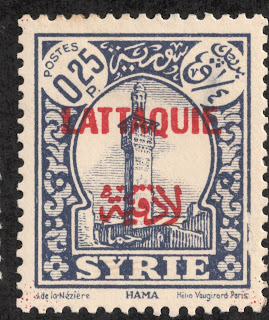 1931-33 Scott 6 25c dark blue gray, red overprint
On stamp of Syria, Design A8, "View of Hama"
Of interest, although the design above is clearly labeled "Syrie", and has an A8 designated design in Scott, I am unable to find a similar listed unoverprinted Stamp for Syria in the 2011 Scott Classic catalogue. The same situation is found for the Scott 14 4p orange (design A14) at the post header, and the Scott 3 (design A7) shown elsewhere on the post. And, to add to the mystery, the 2011 Scott Classic does not illustrate the A7, A8, and A14 designs for this Syria issue.

But the design and stamps actually do exist for Syria- I found them in my Syria collection. And my '47 Scott has the correct illustrated design for the stamps, and the correct design listing.

Conclusion: There is a mistake in several Syria design listings for this issue in the 2011 Scott Classic Specialized catalogue. (It is certainly possible that this mistake exists in other recent year Scott Classic catalogues as well.) Please correct as follows...

What it should say in Scott...

Note that the 2011 Scott Classic also does not illustrate the A7, A8, and A14 designs. I show them here, or consult an older correct Scott catalogue. 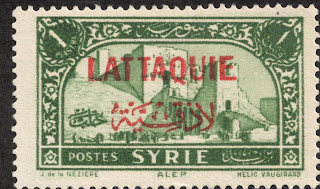 1931-33 Scott 9 1p green, red overprint
"Citadel at Aleppo"
As one can observe, the overprint was in either black or red. 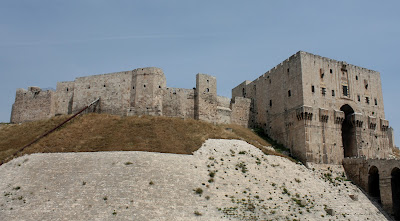 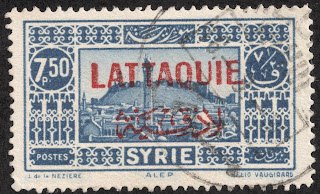 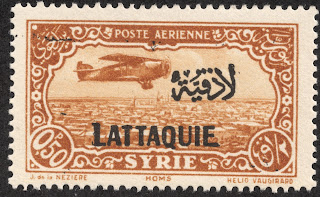 Air post 1931-33 Scott C1 50c ocher, overprinted
"Plane over Homs"
Eleven Air Post stamps were issued in 1931-33, and all have the same design with different colors. 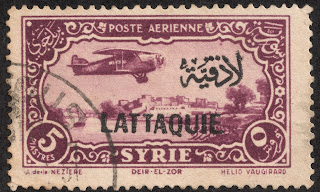 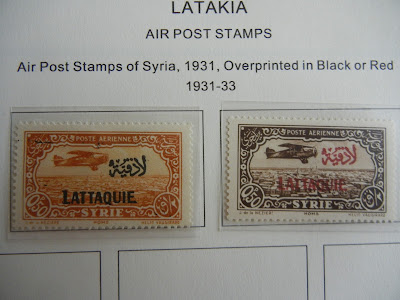 Latakia 1931-33 Air Post in Deep Blue
Deep Blue (Steiner) has Latakia on three pages with all the major Scott numbers having a space. 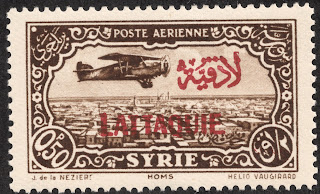 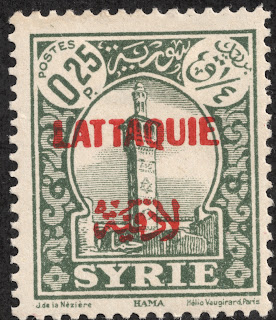 1931-33 Scott 5 25c gray green, red overprint
On stamps of Syria
Out of the Blue
The French mandate era in the Middle East following WW I resulted in some interesting overprinted issues. And obscure and short lived states- such as Latakia. Fascinating. 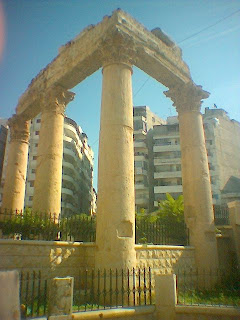 Temple of Bacchus in Latakia