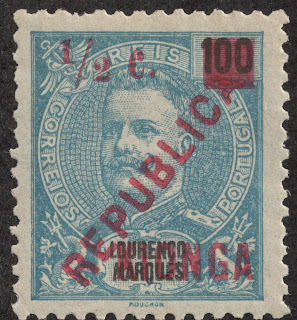 May 29, 1916 Scott 1 1/2c on 100r blue on blue
"Kionga" red overprint/surcharge  on Lourenco Marques Stamp
Quick History
The border of German East Africa and Portuguese East Africa followed the Rovuma river. The exception was at the Rovuma river outlet to the Indian Ocean, where the Germans had established an outpost on the south side of the river.

This outpost was called Kionga (now Quionga), and had a population of 4,000 in 1910. This small area of 200 square miles (550 square kilometers) became known as the "Kionga Triangle" because of subsequent events that occurred during  WW I. 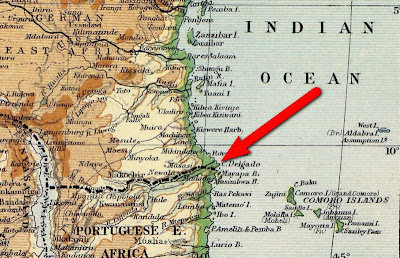 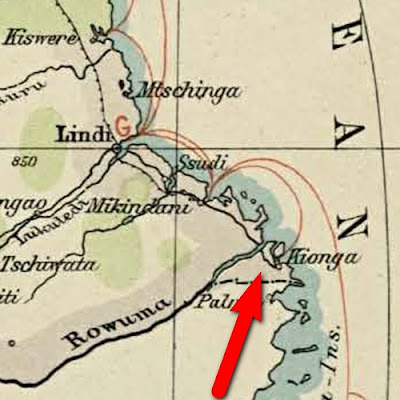 Closeup of "Kionga Triangle" (Red arrow)
Portugal entered the war on the Allied side on March 9, 1916. Portugal elected to attack the Kionga Triangle, which it had coveted since 1887.  Though the Germans were quite occupied with the British and Belgian advances into German East Africa, it still was not easy for the Portuguese troops. 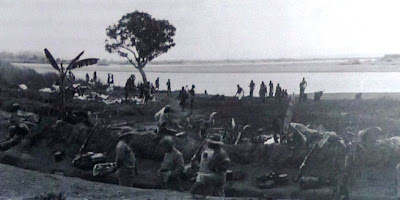 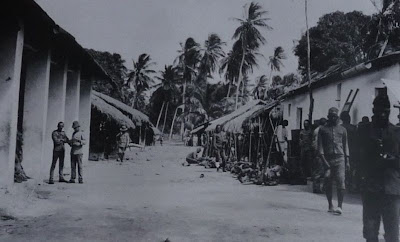 Portuguese troops occupying Kionga
In the meantime postage stamps from Lourenco Marques (Now the city of Maputo, and the Capital of Mozambique) were overprinted/surcharged for use in Kionga.

Subsequently, the Treaty of Versailles awarded the Kionga Triangle to the newly named Portuguese colony of Mozambique.

The larger portion of the rest of German East Africa was mandated to Britain (Tanganyika), while a smaller north-western portion was given to Belgium ( Ruandi-Urundi). 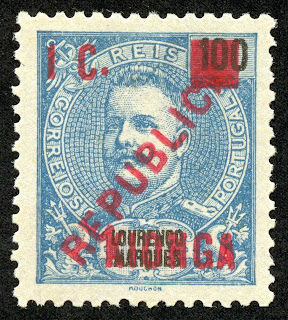 1916 Scott 2 1c on 100r blue on blue
Into the Deep Blue
The Scott Classic Specialized catalogue has, for Kionga, the 1916 four stamp set of overprinted/surcharged Lourenco Marques Scott 149 100r blue on blue stamps.

A closer look at the stamp issue
100 Centovos = 1 Escudo 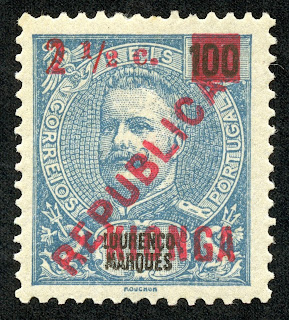 1916 Scott 3 2 1/2c on 100r blue on blue
The four stamp set all use the basic Lourenco Marques Scott 149, which was then overprinted "Kionga", and has a different surcharge for each stamp.

The Kionga set was released May 29, 1916 for presumptively the use of occupying Portuguese troops- and in no small measure- to add international credibility for the land spoils of war. 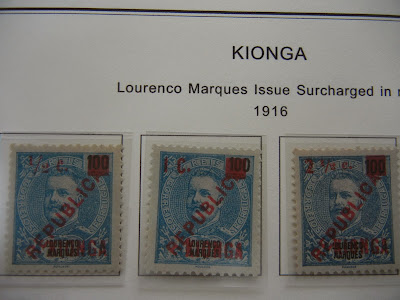 Deep Blue's one page layout for Kionga
Deep Blue (Steiner) has one page for Kionga, and, as one would expect, provides four spaces for the entire philatelic output for Kionga. The territory became part of Mozambique after WW I. 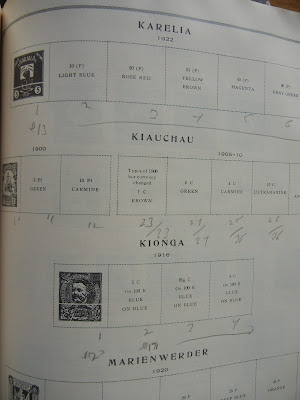 The '69 page is located after the Kenya, Uganda, Tanganyika section.

The '41/'43/'47 editions likewise have Kionga after Kenya, Uganda, Tanganyika. 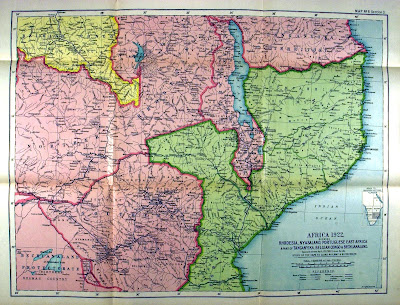 1922 map of east Africa
Note the "Kionga Triangle" here is mislabled as part of Tanganyika
Out of the Blue
What is more fun than learning about the detailed history of WW I?

When stamp issues are involved. ;-)

Note: Maps, pics, appear to be in the public domain. (Red arrows on maps are my addition.)