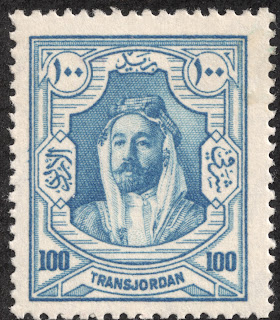 1927-29 Scott 154 100 (m) light blue
"Emir Abdullah ibn Hussein"
Quick History
Trans-Jordan, the land east of the Jordan River, was part of the territory mandated as a British protectorate following the Arab revolt and the collapse of Ottoman rule during WW I. 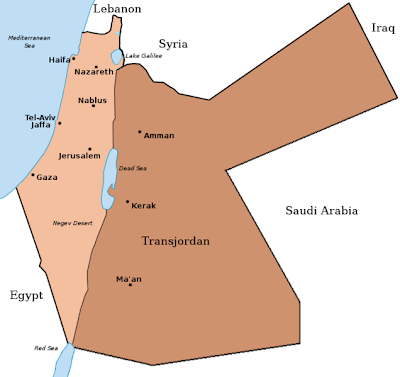 The British Mandate for Palestine
Trans-Jordan in brown
Under the general Palestinian Mandate, the British carved out a separate administration east of the Jordan River, and had the House of Hashemite, Emir Abdullah, the eldest son of British ally Sharif Hussein of Mecca and the Kingdom of Hejaz, become the titular head. Abdullah's government was established in April, 1921.

On the other side of the Jordan River-Palestine-, the British were tasked with creating a home for the Jewish people, while keeping the Arabs happy too. For another time, another post. ;-) 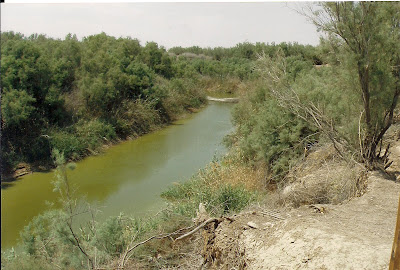 Trans-Jordan was under British control until 1928, although the Brits afterwards continued to maintain oversight on military, foreign policy, and some financial  issues. Full independence and formal elevation to the Hashemite Kingdom of Jordan occurred in 1946. Jordan was admitted into the United Nations in 1955. 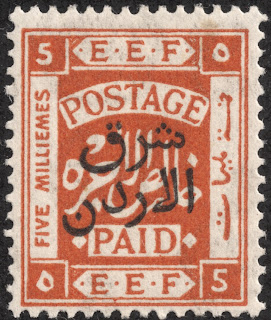 Before having their own stamp design issues beginning in 1927. there were overprints and handstamps using the stamps of Palestine and the Kingdom of Hejaz. A number of these overprinted or handstamped issues from 1922-23 (88 stamps) have a high CV ($10+-$2000). These fall more into the realm of the specialist collector, so I will say no more about them here. 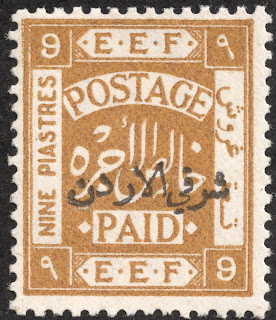 1920 Scott 9 9pi bister "Stamps and Type of Palestine, 1918"
Overprint reads "East of Jordan"
Fortunately, the first issue of eleven stamps produced in 1920 for Trans-Jordan has seven stamps with CV <$1-$3+.

The Palestinian overprinted stamp simply says "East of Jordan". Remember, this is before the Hashemite government had been established. 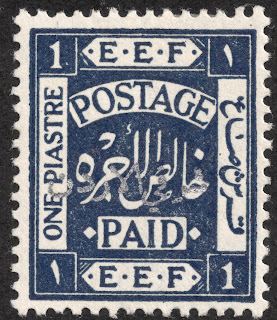 1920 Scott 6 1pi dark blue
Silver overprint
The overprints during the early days of Trans-Jordan can be found in red, violet and gold. I believe the 1 Piaster dark blue shown above has the only silver overprint. 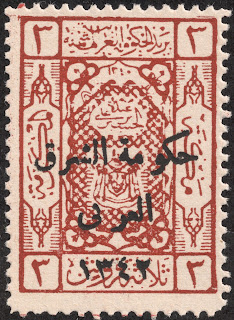 1924 Scott 119 3pi red brown "Coat of Arms"
Overprinted on stamps of Hejaz, 1922-24
Overprint reads "Arab Government of the East, 1924"
As mentioned, the Kingdom of Hejaz stamps were also overprinted during the 1923-24 era ( 28 stamps). Recall that Emir Abdullah"s father was the Grand Sherif of Mecca and the King of Hejaz. 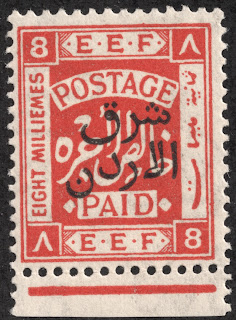 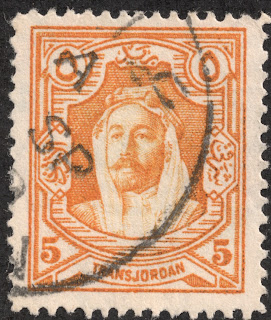 1927 Scott 148 5 (m) orange
"Emir Abdullah ibn Hussein"
In 1927, and on the eve of greater autonomy from the Great Britain, a 13 stamp issue was produced with Emir Abdullah's portrait. 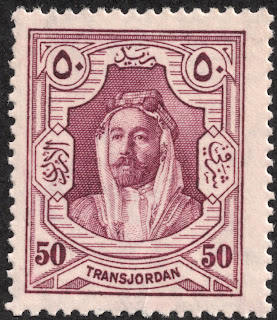 1927 Scott 152 50 (m) claret
The 6 higher denomination stamps were issued in larger format as shown above.

Abdullah had played a major role along with T.E. Lawrence during the Great Arab Revolt against Ottoman rule.

He was Emir and ruler of Trans-Jordan from 1921 to 1946, and then King of Jordan from 1946. He was assassinated in 1951 by a Palestinian gunman, who thought Abdullah was planning to make a separate peace with Israel. 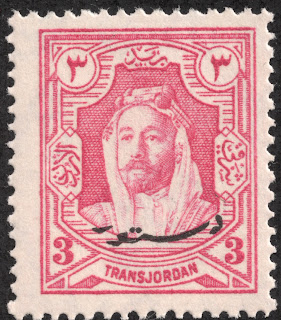 1928 Scott 159 2 (m) rose, Perf 14
Overprint reads "Constitution"
In 1928, a Constitution was enacted for the country as Britain permitted a greater independence. 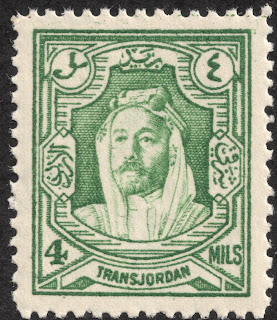 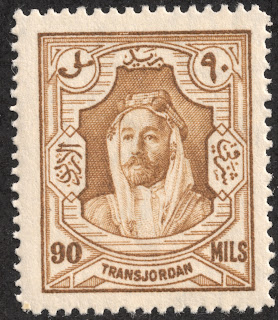 With these stamps, one might need the watermarking tray, the perforation gauge and a mm ruler, as one will see presently.

The above set is British Colonial watermark 4 - "Multiple Crown and Script CA". The perforations are 14. 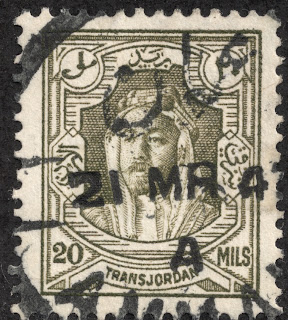 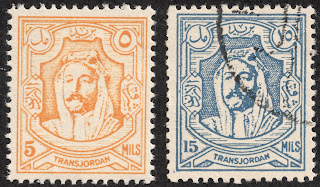 1942 Scott 203 5m orange yellow; Scott 205 15m deep blue
Lithography; Unwatermarked, Perf 13 X 13 1/2
For the classical collector that ends their collection at 1940, there are some confusing issues for this design that one should be aware.

In 1942, an issue using lithography (rather than engraved) was produced. These 8 stamps clearly have a cruder appearance, almost as if they are forgeries*. ;-) In addition, the inscription above the head is redrawn, as well as the Arabic "millieme" character  on the upper left.

Keijo, in his excellent post http://www.stampcollectingblog.com/transjordan-1942-stamp-forgery.php
suspects these are indeed forgeries of this issue, especially the "Scott 205 15m deep blue" illustrated above. The "Scott 203 5m orange yellow" also looks washed out, but I will concentrate on the 15m deep blue. 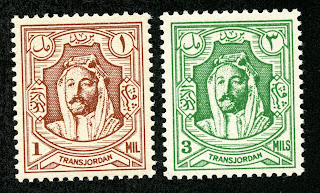 1942 Scott 199 1m dull red brown; Scott 201 3m deep yellow green
Lithographed, unwmk, Perf. 13 X 13 1/2
The genuine lithographic copies certainly do not have the fine detail of the previous engraved specimens, but are not horribly crude either. 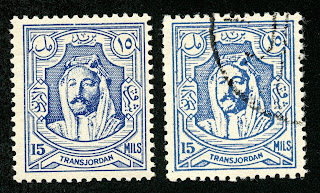 Left: Genuine 1942 Scott 205 15m deep blue
Right: Probable Forgery 15m deep blue
What can we say? (One might want to enlarge the image for close inspection)
• Stanley Gibbons characterizes the forgeries as on "whiter paper with rough perforations". That might be helpful in some cases, but here I really do not see an obvious difference.
• What is clear is the lack of fine detail on the face, the "blobby" appearance of his lower  left side of his face, as well as blotch running down to his left eyebrow and eye.
• Then note the fine short horizontal lines surrounding the inner "MILS" tablet on the genuine, and compare to the crudeness, and the running together of these lines with the probable forgery. Note the paint blotch next to the inner frame line of "MILS".
• Note other small paint blotches along the inner and outer frame lines. Notice the outer frame line is wider and not as cleanly linear as the genuine lithographed stamp. Keijo suspects these irregular blotchy markings are the characteristics of a typographed, rather than a lithographed stamp. It is certainly compatible. 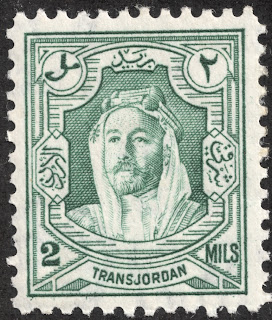 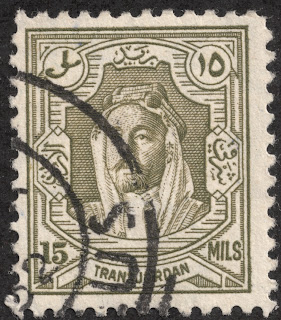 So, to summarize, one will need to pay attention to:
Printing method
Design
Paper
Perforation
Size
Watermark
Color
Forgeries of the 1942 lithographic set 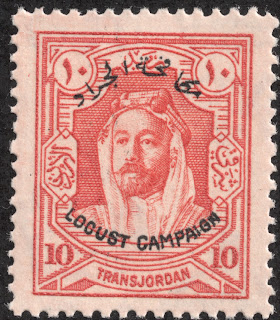 This was not the last time Jordan has had problems with swarms of locusts..

A meeting was held at the armed forces headquarters in the presence of the country's agricultural officials to discuss preparation and coordination between concerned parties to face the locust plague, the report said.

About 60 different kinds of vehicles and planes from Jordanian Air Force are mobilized in the campaign against locusts before the swarms devour crops, Sarayreh said.

He noted that according to received information from all operation sites, swarms of locusts have arrived at the south of Jordan.

For the first time in almost 50 years, millions of pink locusts originated in West Africa and were blown by strong wind across the Sahara Desert through Libya and Egypt to the eastern Mediterranean. 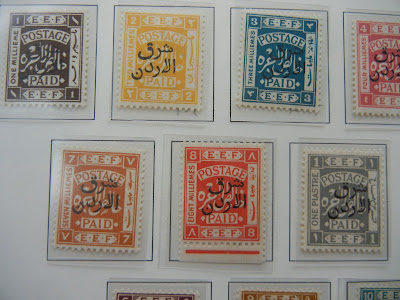 1925 overprinted Palestinian issue in Deep Blue
Deep Blue (Steiner) has 18 pages for Jordan and follows the Scott catalogue nicely. As a bonus, the Steiner also provides spaces for the minor number 1939 Abdullah issue.

Because I don't have many of the expensive overprinted earlier issues, as well as no postage due examples, I have 9 empty pages in these categories. The Steiner definitely keeps one humble. ;-) 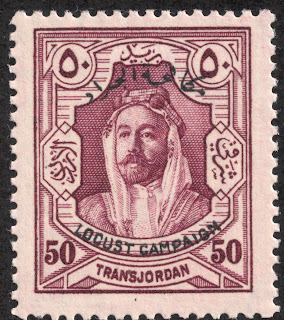 Observations....
• The country is found in the 1940s editions of BB under "Trans-Jordan"
• BB does not include any of the expensive early overprinted issues, and no examples of overprinted Kingdom of Hejaz stamps. Probably a good thing. ;-)
• There are no stamps that reach the CV $10 threshold.
• The 1920 and 1925 issues are represented-which is good- but BB could have extended the stamp spaces somewhat for little increase in CV.
• BB includes the 1934 redesigned "Abdullah" stamps, but none of the other stamps issued between 1930-39 : seven stamps which are CV <$1-$1+. Although the issues are "tricky" (See discussion), one may want to provide some spaces for them.
• BB includes eight spaces for the nice 1933 pictorial issue. I just wish I had some. ;-)

Comments
A) Expensive stamps ($10 threshold): None
B) (  ) around a number indicates a blank space choice.
C) *1934- There are plenty of other stamps of the redesigned "Abdullah" issue that are plentiful and inexpensive- and tricky (See discussion). One may want to provide some spaces for them. 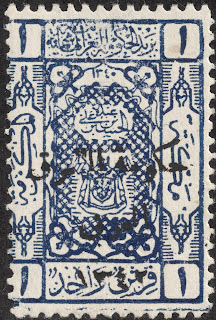 1924 Scott 116 1pi dark blue "Coat of Arms"
"On Stamps of Hejaz, 1922-24"
Overprint reads "Arab Government of the East, 1924"
Out of the Blue
Having visited Jordan in 2008, I have more than a passing interest in the country and its history. I now have a better understanding of its early philatelic history too.

Note: Map appears to be in the public domain 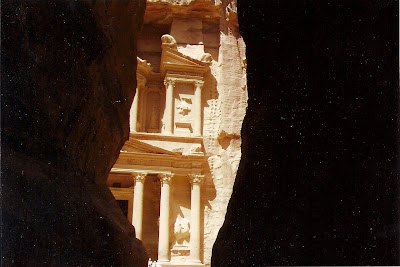