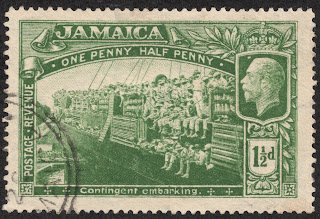 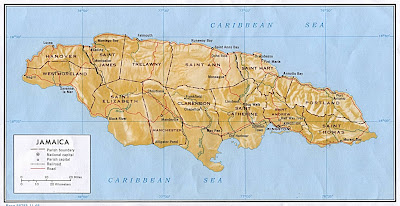 Jamaica
Jamaica has been under British influence since 1655, with independence achieved in 1962. Jamaica is still part of the Commonwealth.

At the beginning of the 19th century, Jamaica was heavily dependent on slaves to work in the sugar cane fields, with about a 20:1 population ratio of blacks to whites.

Full emancipation from slavery was declared in 1838.

Although British stamps with a Jamaican recognizable numeral town cancel can be found beginning in 1858, Jamaica's first Victorian issue- with a pineapple watermark-was issued in 1860. 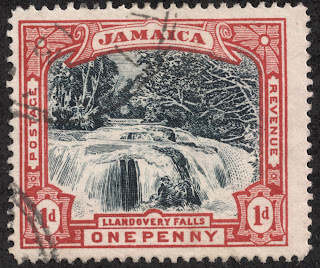 Of those, 86 are CV <$1-$1+, or 51%. Not surprisingly, the catalogue values are higher with the island's close proximity to the United States, and the fact it is a British Commonwealth country.

But it has no extensive rarities, so it can be completed to a high degree by the assiduous classical collector.

A closer look at the stamps and issues
12 pence = 1 Shilling
20 Shillings = 1 Pound
I'm not going to do a general survey here, but rather focus on interesting aspects of the Jamaican stamps and issues. 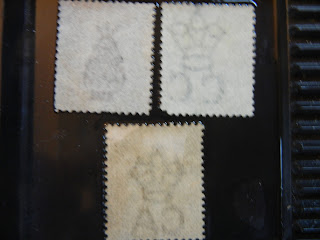 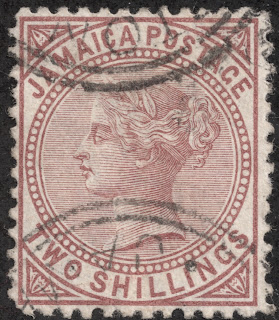 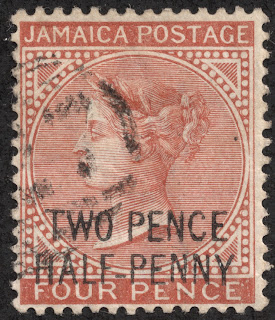 1890 Scott 27 2 1/2p on 49 red brown
In contrast to a crown colony such as Ceylon, Jamaica only had one surcharged Victorian stamp. The "Two Pence Half Penny" is shown above. 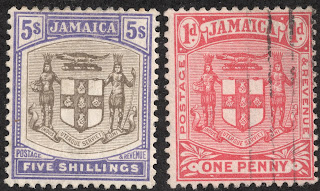 In addition, there are two designs as illustrated above. 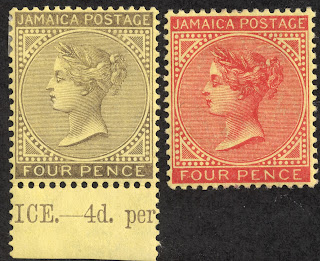 1910 Scott 40 4p black on yellow, chalky paper
1911 Scott 50 4p red on yellow, ordinary paper
Of interest, besides the "Arms of Jamaica" stamps, the 1905-11 issue also had Victorians, ten years after her death! ;-) The eleven different Victorian stamps can be found with either chalky or ordinary paper. This should not pose a problem for the collector, though, as the stamps differ in color. Here I show a nice example of a four pence stamp in two colors. 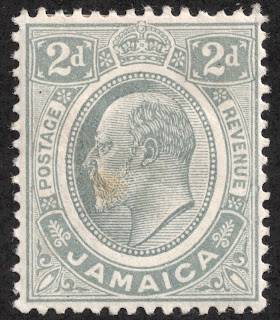 1911 Scott 2p gray "Edward VII"
The only Edward VII stamp issued - and posthumously at that- is illustrated above. He had no stamps issued during his reign (1901-1910) by Jamaica. 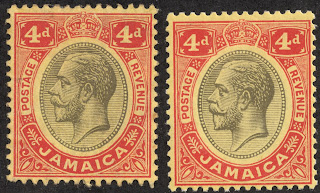 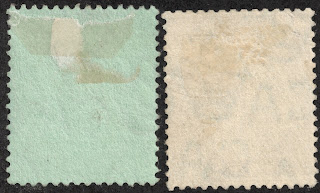 The 1sh black on green turned over
1912 Scott 68 ( chalky paper); 1915 Scott 73 (surface colored paper)
A picture is worth a thousand words. Here is an example of what one would see. Too bad i'm not showing the front of these nice stamps. ;-) 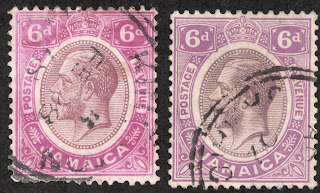 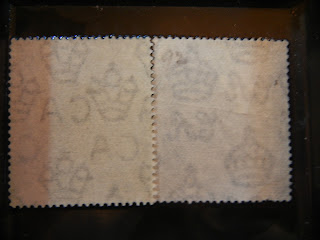 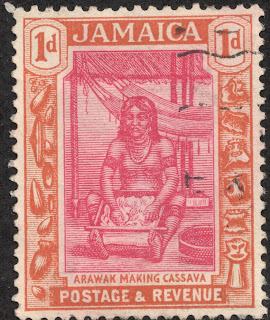 The pictorial design I elected to show, though, shows a native Arawak making cassava. The Arawaks were the indigenous peoples of the West Indies. British colony classical stamps tend not to show many natives, at least not up close, so this pictorial is a real treat. 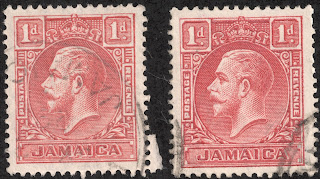 1929-32 Scott 103 1p red "George V", Type I
1932 Scott 103a 1p red, Type II
Jamaica has a second design for George V, and they (three stamps) were issued between 1929-32. The 1p red, though, is found as two types. Type II has cross shading below JAMAICA, while Type I does not- enlarge the image and compare. Since both types are at minimum catalogue value, there is a good chance one will find both types in a collection. ;-) 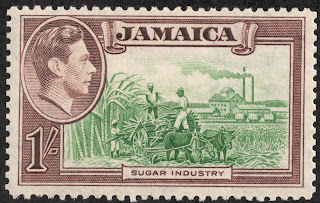 1938-51 Scott 125 1sh dark brown & bright green
"Sugar Industry"
As is usual for many British colonies, a George VI pictorial issue was released in 1938. Eight of the 13 stamps are in bi-color, and are nicely done. 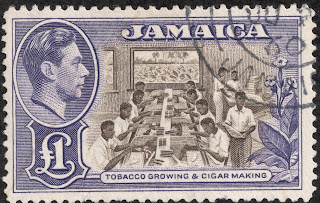 1949 Scott 141 £1 purple & brown
"Tobacco Growing and Cigar Making"
Certainly a nice feature of the Scott Classic Specialized catalogue, as well as the classic Steiner PDF album pages, is they have all the stamps of the George VI era through 1952.

Here is a pictorial about cigar making. I think today one wouldn't find this subject on stamps very much.

1916-19 War Tax stamps: four overprints
Jamaica has eleven major number war tax stamps with four different overprints on them. What a bonanza! All are inexpensive, save for the MR3 3p violet on yellow (surface colored paper) @ CV $10+. 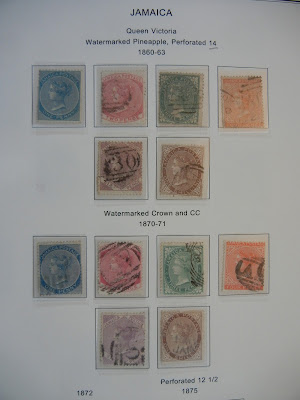 The early Victorians in Deep Blue
Deep Blue (Steiner) has 14 pages for Jamaica 1860-1952, and follows the modern Scott catalogue format exactly. I appreciate having spaces for all the watermark different stamps. 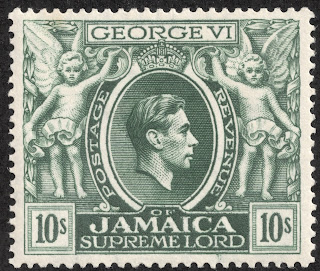 Observations...
• Jamaica has only one stamp space that crosses the $10- threshold.

• BB excludes a number of the later Victorians by date criteria. I followed BB's criteria here, but one can always expand the dates and include them.

• As is usual for BB, watermark varieties will only have one space. But, it is wise to watermark what you have, as values can be quite different.

• BB does miss some stamps: specifically, the 1919 war tax stamps with red overprint are not given spaces.

• In two instances, BB asks for the (now) minor number. Per protocol, I include the major number as a choice in the checklist.

B) (  ) around a number(s) indicates a blank space choice.

C) *1860-72 dates in BB for the Victorians here will exclude some later stamps.

D) *1883-90 dates in BB for the Victorians here will exclude some later stamps.

E) *1889-97 dates in BB for the Victorians here will exclude some later stamps.

G) *48a or 48-BB calls for the (now) minor number. Therefore, per protocol, I include the major number.

H) *64a or 64-BB calls for the (now) minor number. Therefore, per protocol, I include the major number.

I) *65 or 71- the surface colored paper stamps are included as choices here. 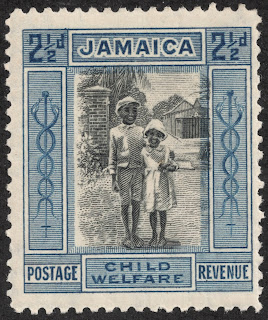 Semi-postal 1923 Scott B3 2 1/2p blue & black
"Native Boy and Girl": Sold 1/2p over face value
Benefited the Child Saving League of Jamaica
Out of the Blue
Jamaica has just the right amount of differentiation between issues to keep an obsessive-compulsive such as myself interested and happy. ;-)