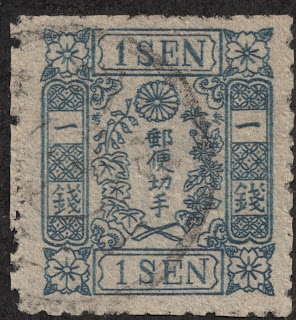 1872-73 Scott 10 1s blue, wove
"Imperial Crest and Branches of Kiri Tree"
Probable Wada Forgery
Quick History
Lying east of China in the North Pacific Ocean, the Empire of Great Japan existed from the Meiji Restoration in 1868 to 1947, when a new constitution was created..

Imperial Japan elected to industrialize, and became a world military power, culminating in the Second Sino-Japanese War (1937-1945), and the Pacific War (WW II). 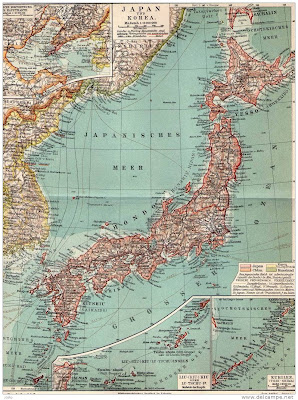 Japan 1904
The Meiji period lasted from 1868-1912. During this era, the process of westernization began with the adoption of a judicial system and a constitution. The abolishment of feudal laws and customs brought the Meiji government in conflict with the Samurai. 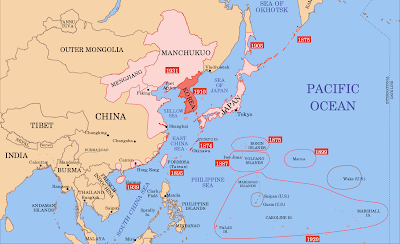 Imperial Japan Expansion 1910-1939
Japan expanded its Empire to include Taiwan, Korea, Manchuria, and part of northern China. Japan was victorious in both the First Sino-Japanense War (1894-95), and the Russo-Japanese War (1904-05). Korea was annexed in 1910. Japan gained the German territory of Tsingtau and Kiautschou in 1914.

Eight stamps were introduced in 1871 with native laid paper. They showed a pair of dragons facing characters of value. They are CV $100-$500+, and forgeries outnumber genuine by 10:1.
I will say no more about them here.

The second Japanese issue, called the "Cherry Blossoms" was issued between 1872-75. An example is shown for the post header. There are also some forgeries for these stamps. But, unfortunately, I have no knowledge in this area.

The "Kobans" were produced between 1876-92, and, along with the 1899-1907 "Chrysanthemum Flower Seal" issue, parallel the period of rapid industrial development. They are fairly easy to find, generally inexpensive, and fortunately, almost always genuine.

The next definitive issue, from 1913-1937, is just complicated enough with unwatermarked versus two watermarked varieties, ordinary versus granite paper, and different Die sizes, that I will devote a separate post just for them, after covering all the other stamp issues.

This post will otherwise cover the remaining stamp issues through WW I, and then until 1923.

The next post will cover the remaining classical years of 1924-1940. 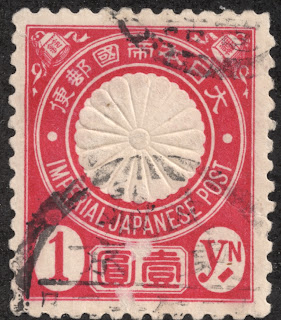 Japan's CV is reasonable for about half the stamp output during the classical era. 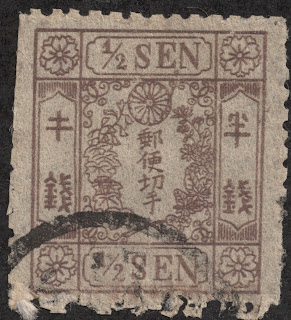 1883 Scott 73 2s carmine rose
1888-92 Scott 81 20s orange "Sun, Kikumon and Kiri Branches"
1888-92 Scott 82 25s blue green "Imperial Crest and Kiri Branches"
The so called 1876-92 "Koban" issues had the Imperial Crest in various designs.  "Imperial Japanese Post" was inscribed in English. Of interest, the "Koban" stamps were designed by an Italian, Edoardo Chiossone. As it was taboo to use the emperor's portrait, he used other images, such as the imperial Chrysanthemum Flower Seal. The 30 stamp issue has a CV of <$1-$4+ for 20 stamps.

The Kobans are a specialist's delight, with paper varieties, color varieties, various perforations and cancellation types. 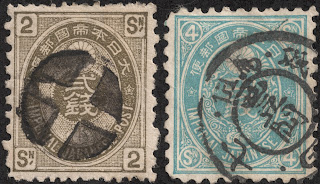 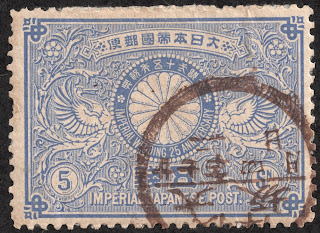 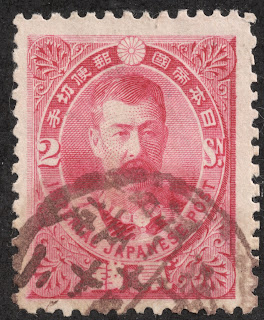 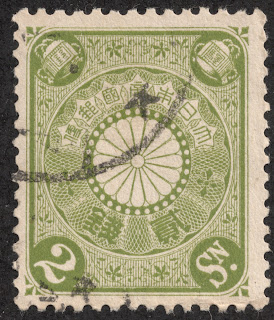 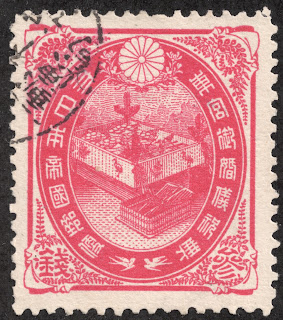 1900 Scott 109 3s carmine
"Boxes for Rice Cakes and Marriage Certificates"
For the wedding of Crown Prince Yoshihito and Princess Sadako, this lovely stamp was issued in 1900. 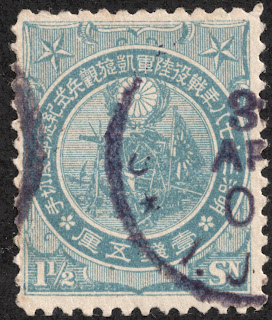 The fact that the Japanese had triumphed over the Russians was quite shocking, and announced that Imperial Japan had arrived on the world stage. 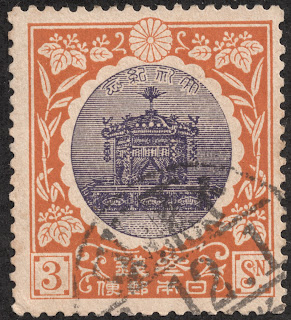 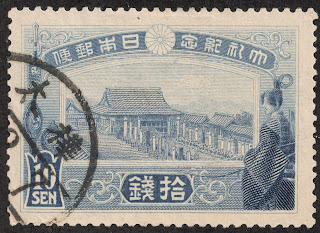 1915 Scott 151 10s ultramarine
The higher values of the enthronement set featured an image of the Enthronement Hall in Kyoto. 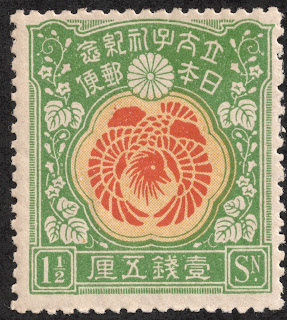 1916 Scott 152 1 1/2s green,red, & yellow
"Mandarin Duck"
The Prince Heir Apparent was recognized with a three stamp issue in 1916. This was the future Emperor Hirohito. Although the two lower values have a modest CV, the highest 10s value is CV $200+! 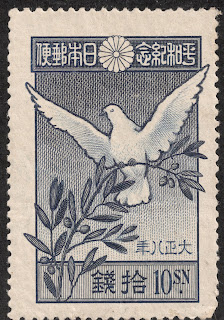 1919 Scott 158 10s dark blue
"Dove and Olive Branch"
For the return of peace after WW I, Japan issued a four stamp set. The higher values have this striking design.

And this stamp provokes in me a remembrance.

My Father, as most in his generation, participated in WW II. When he was in Japan during the occupation, he picked up some mint stamps, including this example. I clearly remember admiring this stamp in my Father's "Modern Postage Stamp Album", the red album. 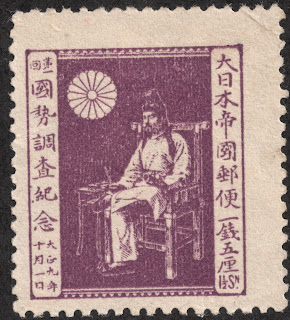 1920 Scott 162 3s rose
A two stamp set was also released in 1920 for the dedication of the Meiji Shrine. The image on the stamp shows the shrine, which is located in Tokyo. 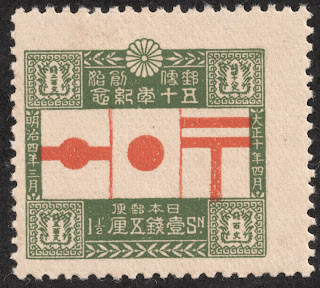 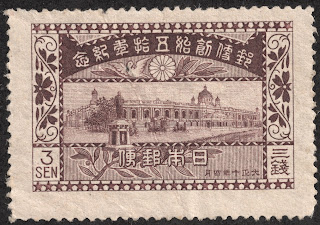 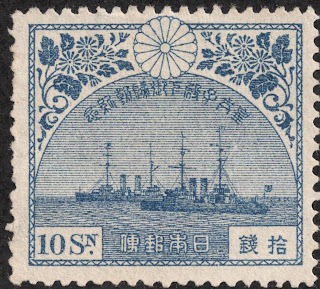 1921 Scott 170 10s deep blue
"Battleships Katon and Kashima"
When Crown Prince Hirohito returned from a European visit, the occasion was celebrated with a four stamp set: not incidentally showing off the Navy might of Japan. 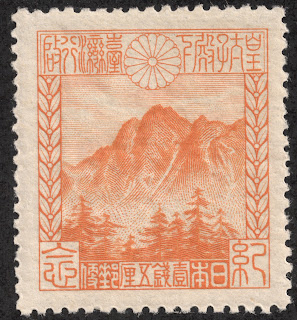 1923 Scott 177 1 1/2s orange
"Mt. Nitaka, Taiwan"
Graphically illustrating the expanding Imperial Japanese Empire, a two stamp set was released when Crown Prince Hirohito visited Taiwan. The set was only sold in Taiwan, but was valid throughout the empire. A lovely engraved specimen. 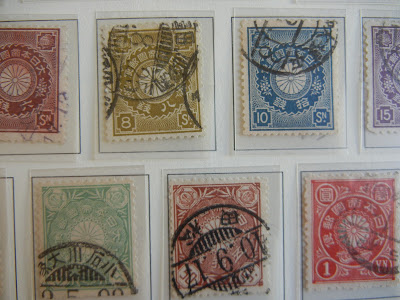 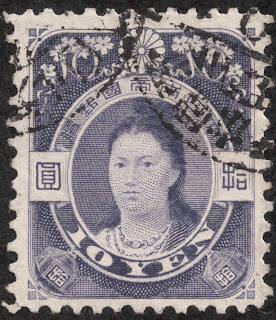 •  The 1913-38 definitive issues- Be aware that 1-3 stamps are eligible for a space- based on color and watermark. Also some stamps are not eligible because of BB's color specifications. There are additionally minor numbers eligible based on Old Die/New Die size differences. I will create a  separate post about these issues.

D) *1913-38- Be aware that 1-3 stamps are eligible for a space- based on color and watermark. Also some stamps are not eligible because of BB's color specifications. There are additionally minor numbers eligible based on Old Die/New Die size differences. See my separate post about these issues. 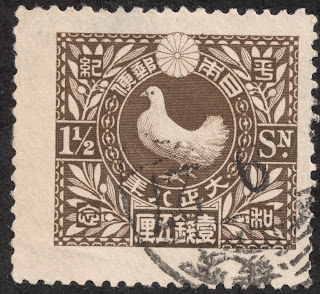 1919 Scott 155 1 1/2s dark brown "Dove"
Restoration of Peace after WW I
Out of the Blue
Japan is an interesting country for the WW classical generalist. The early issues are difficult, and forgeries are reported. Later definitive issues can be parsed to a point where one is heading into specialist territory. But the designs are attractive indeed.