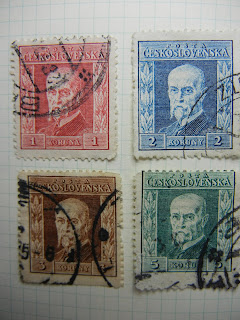 1925 Scott 98-101 "President Masaryk" First Engraving
The Masaryk's come in multiple perforations, multiple stamp sizes, unwmk/wmk horizontal/wmk vertical, short and long mustaches, and four engravings
As I was preparing the Czechoslovakian Big Blue checklist, it became apparent there was enough engraved varieties in the 1918-30 stamp era to merit a separate blog for a closer examination. Now I am not a philatelic "Czech" expert; far from it. :-)  But I had to review basic engraving differences in the Czech stamps in order to adequately finish the Big Blue checklist.

A couple of comments before getting on with this interesting task..

A) The analysis will be based on the information in the Scott Classic Specialized catalogue. Other catalogues (Michel?) might parse the differences more finely, but most collectors with Big Blue, a Scott inspired album, will also be using the Scott catalogue.

B) What I can add to the Scott information is a stamp image highlighting the engraving difference(s). A picture is worth a thousand words.

C) This analysis is clearly not the last word in engraving differences. You might want to consult other informational sources. In particular, Keijo and his Stamp Collecting Blog has wonderful information, using the Michel catalogue as a source I believe, on the Masaryk stamps of 1925-27.
http://www.stampcollectingblog.com/czechoslovakian-masaryk-stamps-of-1925-1927.php

So on with the interesting part.... 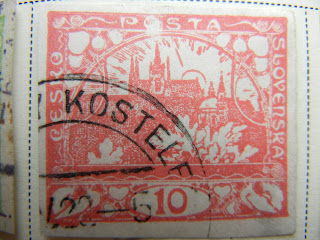 10h rose
The denominations up to 40h all have the "Posta Ceskoslovenska" as a white inscription on a colored background. 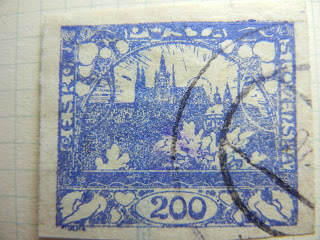 200h ultramarine
The values above 40h have a colored inscription on a white background
1919 "Harcany at Prague" with "cesko-slovenska" inscription issue
The issue has three engraving types ( Type II,III,IV). There is actually little confusion, as only one engraving type is used on a particular denomination. Note: I assume "Type I" are the 1918-19 issues? 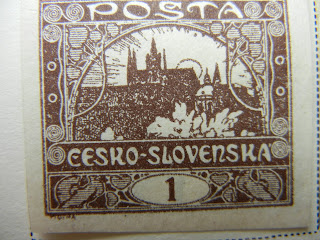 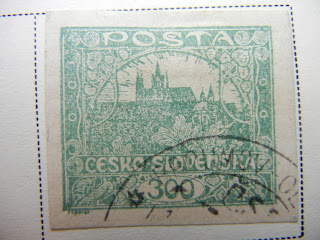 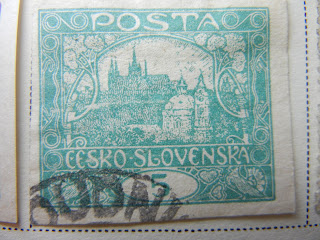 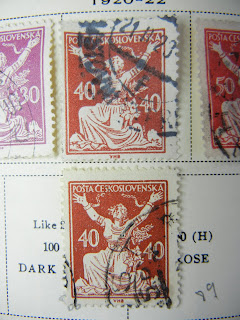 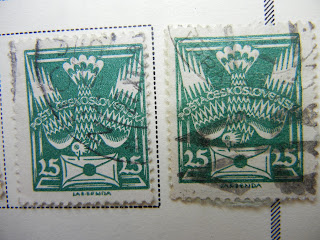 The left stamp has the top of the "2" curving up (Type I), while the right stamp has the top of the "2" curving down (Type II)
1923 "Agriculture & Science" issue
Type of 1920 issue redrawn
Very interesting issue. Consists of the 100h red/yellow, the 200h blue/yellow, and the 300h violet/yellow. Each stamp has different multiple perforations varieties, all with their own minor Scott number. But the challenge is identifying the three engraving varieties (Type I,II,III) for the 100 red/yellow, and the two engraving varieties (Type I,II)  for the 200h blue/yellow and 300h violet/yellow. I would recommend clicking on the image to enlarge it to study the stamp differences. 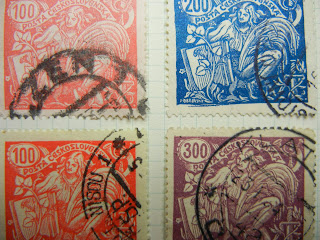 Type I: The upper row 100h stamp has the Leaf below the "O" in "POSTA" with a straight rib to the end of the leaf; and a white triangle above the book is completely to the left of the branch. The "P" has a little stub.
Type II: The bottom row stamps have the Leaf rib crooked; and the triangle extends to the right of the branch. The "P" has the stub like Type I.
Type III: The upper row 200h  shows a broken rib in the top middle Leaf; the Leaf below the "O" is short; the triangle same as Type II; "P" has no stub.
1925-27 Masaryk issues
I will focus on the four denominations of the Masaryk issues consisting of the 1k carmine, the 2k deep blue, the 4k brown, and the 5k blue green. They can be found with the watermark (107-Linden Leaves) either horizontal (more usual) or vertical. One variety ( Scott 130), the 1927 1k carmine rose, is unwatermarked. They can come in different perforations. They can come in different stamp image sizes, usually linked to a specific engraving type. And most interesting, there are FOUR known engravings. (Note: I will refer to the first engraving as type I, second engraving as Type 2 etc.) The 1k carmine has the most (Type I,II,III,IV), followed by the 3k brown (Type I,II,IV), and then the 2k deep blue and the 5k green (Type I,II).
As mentioned, most (except Scott 130) are watermarked-usually horizontally. Scott, though, gives major numbers (101A-101D) to the Type 1 stamps that happened to be watermarked vertically. So pay "watermark" attention to Type 1 stamps.
There are also Masaryk stamps that come in long mustache/short mustache varieties (1926 Scott 106 1k carmine rose, 1926-27 Scott 116 50h deep green, 1927 Scott 130 1k carmine rose). I will say no more about them here as I have no good examples.
We usually don't pay that much attention to the size of a stamp. But, for the most part, one can actually separate out the four different engravings simply by measuring the size. The sizes Scott gives are 19 3/4 X 22 1/2 mm for Type 1-wmk horizontal; 19 1/4 X 23 mm for Type 1-wmk vertical; 19 X 21 1/2mm for Type II; 19-19 1/2 X 21 1/2-22mm for Type III; 19 X 22mm for Type IV. I measured my stamps after determining  the engraving type, and it was spot on! So, if one doesn't want to look at the stamps, then measure them. ;-)
Here, for the engraving differences, we will look at the stamp images. For a closer look, click on the images and enlarge them. 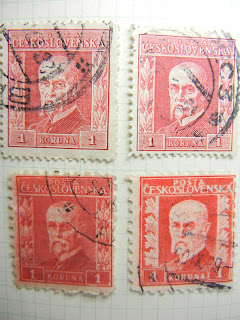 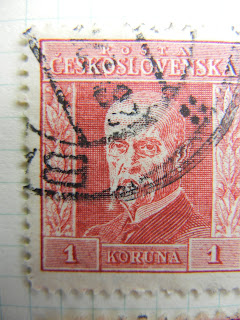 First (Type I) engraving
"T" over ctr of "V"
Crossed shaded diagonal lines on right shoulder
Horizontal lines in top and bottom tablets
If Type I, confirm by measuring the stamp, and look at watermark 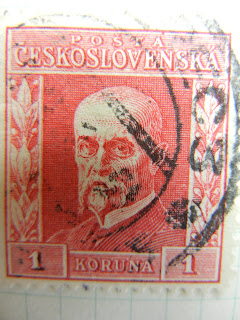 "T" over right of "V": either Type II or III
One short line in "A"(Type II), or blank space in lower part of "A" (Type III)
Crossed shaded diagonal lines on right shoulder (Type II) or shading of single lines only (Type III)
Measures 19 X 22mm; 13 3/4 perf; watermarked
What do you think? 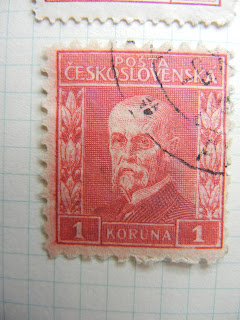 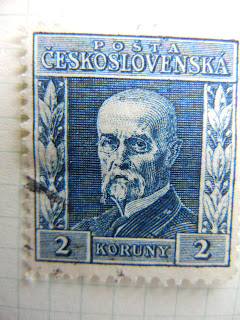 Getting tired of 1k carmine? Here's a 2k deep blue
Only comes in either Type I or Type II
"T" over right of  "V": Type II
One short line in "A":Type II
Crossed shaded diagonal lines on right shoulder: compatible with Type II
To confirm: measure the size
1930 50h myrtle green "President Masayrk"
The 1930 50h comes in two types. Click on the image below to enlarge it  and examine the space between the bottom of vignette and the "HALERU" frame panel. 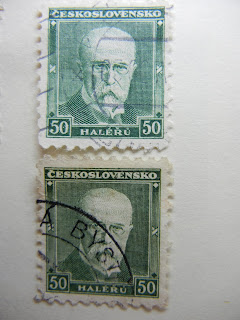 1930 50h myrtle green: Top: Type 1; Bottom: Type II
Top stamp : white space between the coat shirt and tie, and the top of the "HALERU" frame panel.
Bottom Stamp: white space not so much:
That was fun!  :-) With Big Blue, the collector can get as detailed -or not -as she or he wants. Big Blue makes very little demands in regards to measuring perforations, checking watermarks, differentiating between engravings etc. But if one wants to do that for certain issues or countries, the option is there.
If you enjoyed this post, or have some information to share, or have some constructive criticism, please share your thoughts and reactions in the "comment" section. I've recently changed the settings, so any reader should be able to post. Thanks!
Jim Jackson
Posted by Jim at 11:41 AM