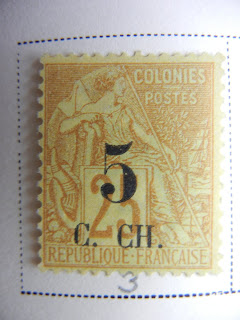 1886-87 Scott 3 5c on 25c yellow/straw
Quick History
A former French Colony from 1862 to 1954, and an administrative unit of French Indochina, the population was 4 million in 1940, and the Capital was Saigon. The territory of Cochin China is now the southern third of Vietnam. South Vietnam was created in 1954 by adding part of southern Annam to Cochin China.

Big Blue Picture
From 1886-88, Five stamps of French Colonies were surcharged in black and issued for Cochin China. Indochina stamps were used after 1892.

Big Blue '97, on one line of one page, has 4 stamp spaces. The 2011 Scott Classic Specialized catalogue has 5 major stamp descriptions. Coverage by Big Blue is 80% for this small group. 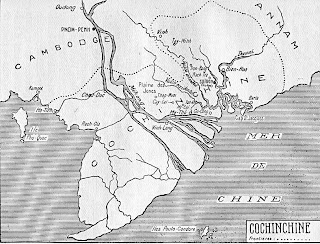