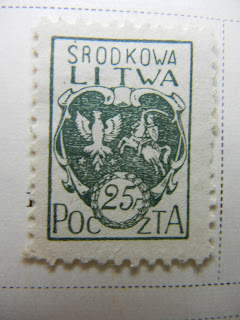 1921 Scott 2  25f dark green"Coat of Arms"
Quick History
Central Lithuania, with the Capital Vilnius, was located east of Lithuania and north of Poland. Originally a Grand Duchy of Lithuania, the territory came under Russian rule by the end of the 18th Century. After WWI, Lithuania claimed the territory, but the Polish army under General Zeligowski occupied the land from 1920-22. During this time, the stamp issues were produced, and the General appears on Scott 26, 57, & 58. Subsequently, the territory became part of Poland.

Big Blue Picture
Big Blue '97, on three pages, has 43 spaces for regular, semi-postal, and postage due stamps. The 2011 Scott Classic Specialized catalogue has 53 major descriptions. Coverage by Big Blue is 81%.

Coverage by Big Blue, based on the 2011 catalogue, is magnificent; only missing the Scott 13-22 1920 surcharged Lithuanian 1919 stamp issue. This stamp issue is expensive (cheapest $20+), so a good decision by BB.

But there is a curve ball.

ALL of the issues in BB also exist as Imperforate- so DOUBLE the possibilities. In fact, the '41 and '47 editions DO provide room for the Imperforates too. The '69 and '97 editions have cut out these extra spaces. So a bad choice by BB?

Still, that leaves the '69 and '97 BB collector with a dilemma. Does one mix and match the perforated and imperforated varieties together? After all, they share the same Scott number. Or does one find separate room for the two varieties?  With the spacious '97, I plan to have a Perf group and an Imperf group for each series. 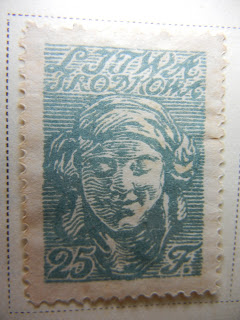 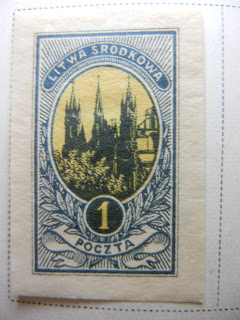 The Imperforated variety: 1921 Scott 35 1m dark gray & yellow "St. Anne's Church,Vilnius"
Kinds of Blue
The '69 and '97 editions are identical.
The '47 and '41 editions have twice the spaces (86 rather than 43), as they provide room for both the Perf and Imperf varieties of each stamp. But the "modern" Scott catalogue (2011 and earlier?) has collapsed the two separate Scott numbers for each variety into one Scott number. So each stamp design only "deserves" one space  in BB. The reality, of course is this: One will choose to only put perforated (or imperforated) stamps in the Album; or mix and match the two varieties with the spaces provided; or find extra space in the Album or elsewhere to separate them out.  Your choice.

Big Blue Bottom Line
I've mentioned nothing about the designs and pictorials: They are quite attractive. I will enjoy filling these spaces. Now where will I put the Imperfs?  :-)