Delegates to the Lugano and Madrid sessions accomplished little in the way of ensuring world peace; they sidestepped raging problems and postponed lesser matters for further study. But they did make philatelic history.

The League allowed their overprinted Swiss stamps to be cancelled in Lugano, the first authorized debut outside the League’s official post office in Geneva. So, the Lugano cancels are considered rare. As I write this post, none are offered on the auction networks. 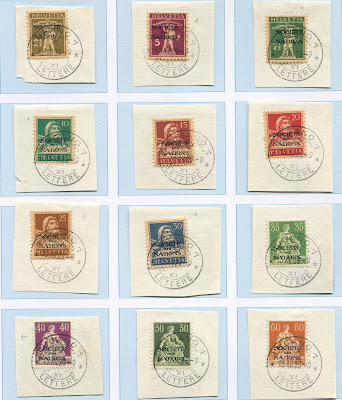 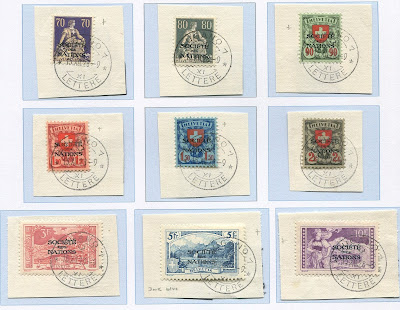 Lugano cancellations
Originally, these 21 cancelled stamps were on a single sheet of paper, then cut apart by a previous owner.


Three Lugano cancellations exist: 1 - like those above, 2 - with three stars instead of “lettere” at the bottom, and 3 - with the inscription “53A Sess. d. Cons” at the top. 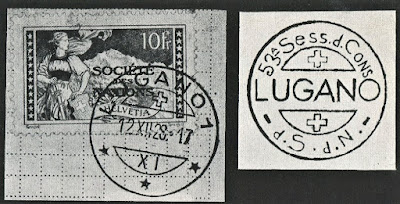 Additional Lugano cancellation types (1)
The Lugano scans illustrate official SdN stamps in circulation during 1928, including Scott #s 2o31a-34a, the Swiss coat of arms over the Matterhorn issue. Post #9 in this series (not yet on-line) elaborates on the coat of arms stamps and their variations.
The League moved the 53rd Session from Geneva to Lugano because doctors told Gustav Stresemann not to go to Geneva in wintertime. Stresemann, the highly regarded German representative, was Germany’s Foreign Minister (1923-29) and a Peace Prize co-laureate. Lugano’s palm trees and balmy breezes were presumed to be healthful.
An unexpected threat of war on the Bolivia-Paraguay frontier became a pressing agenda item for the Lugano Session and an ominous challenge to the League’s peace-promoting ambitions.
Madrid
For the 55th Session, Spain produced stamps with the likeness of King Alfonso XIII overprinted “Sociedad de las Naciones” -- the first non-Swiss League-promoting postage stamps. The 14 stamps were valid for postal use only on 10-16 June 1929. They range from one céntimo to ten pesetas in face value, plus a 20c special delivery stamp. Control numbers appear on the back side of all but the two lowest values. Poor centering is common. The overprint reads “Sociedad de las Naciones LV reunión del Consejo Madrid” (League of Nations, LV Council meeting, Madrid).
These are curious creatures, but not so rare as the Luganos. Most auction networks have a few for sale, but complete sets tend to be pricey. 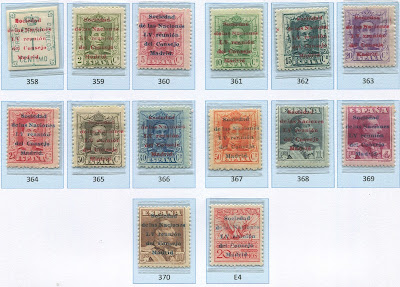 Spain, Scott #s 358-70, E4
The Session decamped to Madrid mainly because Spain wanted it there. It, like Lugano, accomplished little, although they did take up the question of ethnic populations that were disadvantaged by redrawn national borders following WWI. General Primo de Rivera's government stage-managed the event, in combination with the Seville and Barcelona International Expositions, to produce a Spanish extravaganza. Delegates resorted to secret meetings and private conversations in order to do their work, according to reporters for TIME magazine (June 24, 1929).
In addition to the stamps, Spain authorized special cancellations, two of which are shown below. Used examples are rarer than the mint, especially for the high values. 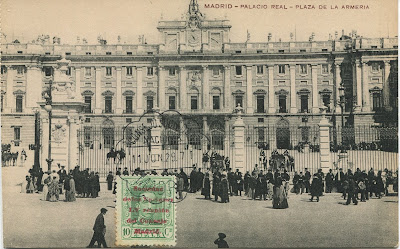 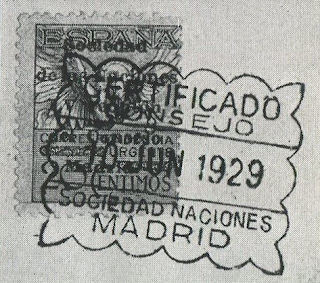 Registered mail cancel on Scott # E4 (1)
The Table of Contents for the League of Nations series is here.
(1)  Charles Misteli provides lists and pictures of SdN and BIT cancels in Les Timbres S.D.N et B.I.T (Geneve, 1943), pp 37-46, K-N. The Lugano and Madrid cancellation illustrations are from page K.