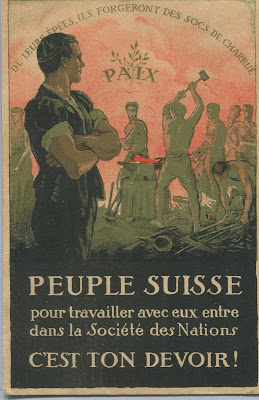 This post displays propaganda stamps and postcards issued during the time the League of Nation was being organized, 1919-20. All items shown stem from the decisions made by the Paris Peace Conference and all relate to the League, but none are directly League-authorized.

During WWI, President Wilson called for "peace without victory" at the conclusion of hostilities, as elaborated in his "Fourteen Points" speech to the US Congress in 1918. Points V through XIII of the speech dealt with "national self-determination." Wilson wanted the people of each nation to determine, by popular vote (plebiscite or referendum), how and by whom they would be governed. Some nations had plebiscites immediately following the War, before the League was up and running; after then, the League administered plebiscites directly. The philatelic upshot was many new and overprinted stamps, along with postal stationary and Cinderellas, promoting desired plebiscite outcomes – a specialization for some stamp collectors. 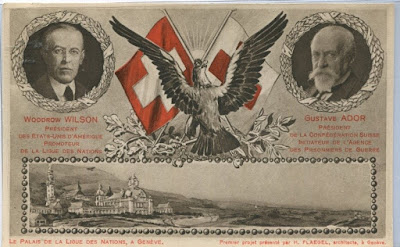 An architect’s fantasy for the future League offices in Geneva:
the Capital of the World.

The propaganda stamps issued for two early post-war plebiscites - Carinthia and Allenstein - are shown below. The 1919 Treaty of Saint-Germain (with Austria) was meant to settle the border question for Carinthia where many Slovenians lived, but it failed. So, hoping to avoid more hostilities, the Allied victors opted for a plebiscite. Both Austria and newly formed Kingdom of Serbs, Croats and Slovenes (Yugoslavia) issued semi-postal overprints aimed to influence the outcome in their direction. These sets continue to be plentiful and inexpensive today, largely because far more stamps were issued than were actually used during the time when they might have had propaganda value.

The Austrian semi-postals sold at three times face value and were intended not only for use in Carinthia, as is sometimes supposed, but for general use throughout Austria. The vote went in favor of Austria and against Yugoslavia.  Since the plebiscite, Carinthia, with a significant minority Slovene population, has continued as a federal state of the Austrian Republic.

Yugoslavia issued fewer semi-postal stamps but, as in Austrian, they sold at three times face value. Six stamps were issued -- all remarkable art nouveau overprints on the newspaper stamp of 1919. The plebiscite was to be held first in south Carinthia where most Slovenians lived, then in the north three weeks later, but only if the south had voted to join Yugoslavia. A 95 percent turnout voted: 59 percent for Austria and 41percent for Yugoslavia. So, the second vote never took place.

The non-postal propaganda produced on both sides, funded in part by the sale of the semi-postal stamps, grew increasingly hostile and, in Yugoslavia, became bitterly anti-Semitic. 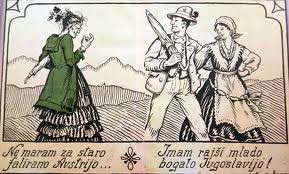 I don't care about old failed Austria ...
I rather have a young, rich Yugoslavia! 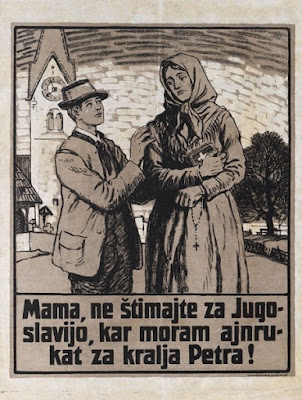 Mother, don't vote for Yugoslavia,
because I have to go to war for King Peter 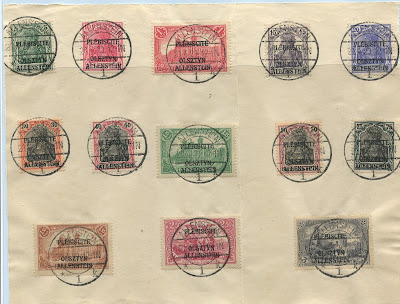 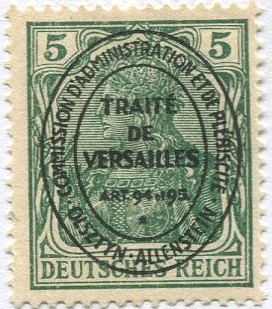 In addition to Carinthia and to East Germany (Allenstein), territorial plebiscites were held in Schleswig, Upper Silesia, Marienwerder, Memel, and Saar.

Of all nations, Switzerland, the future home of the League, was most prolific and enthusiastic in their early pro-League propaganda, as the following examples show: 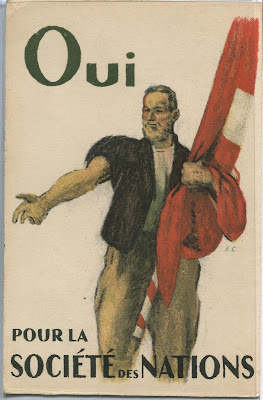 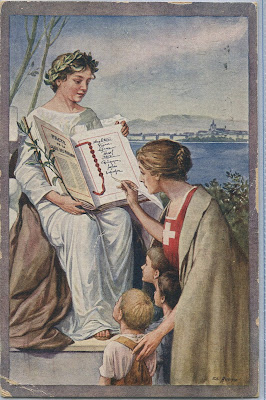 Examples of Swiss pro-league enthusiasm
The United States, caught in a wave of post-war nativism, was less enthusiastic. President Wilson was unable to stop the Repubican Congress’s blocking League membership for the US, a decision that provoked immediate derisive criticism in  Europe and may have eventually led to WW II. 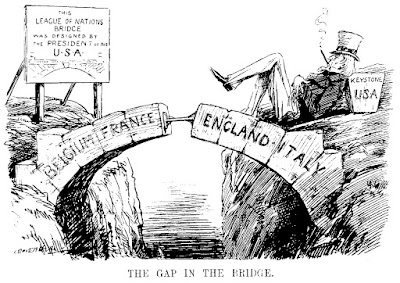 The bridge did eventually collapse.