Jamaica swashbuckled its way through its first 150 years of postal service. Truly exciting.  King Charles II authorized post offices for Jamaica and Barbados in 1663 making them the first British colonies to have such. Captains of Caribbean trading vessels were entrusted with the letters’ safe transport. In the preceding century, however, the English and Dutch had licensed privateers to bollix Spanish shipping. Such “letters of marque,” as they were called, dried up about 1660. High drama ensued: privateers went rogue and initiated the “Golden Age of Piracy.” Many letters never made it to safe harbor. Piracy continued strong until 1730, then dwindled along for another 100 years. Early Jamaican stampless covers are, unsurprisingly, scarce.

Fortunately for BB collectors Jamaican stamps are plentiful, inexpensive, and quite interesting. I’ll comment only on the Jamaican seal showing in the 1903-6 series (see below). A Taino woman and man support a shield with a red cross surmounted by five golden pineapples. At the top, a crocodile poses on a royal mantle (in the stamps, it’s on a log). William Sancroft, Archbishop of Canterbury, designed the original in 1661. The motto, barely visible on BB’s selection, reads Indus uterque serviet uni which translates “Both Indies will serve one” -- definitely colonial in sentiment, possibly racist. Upon independence in 1962, Jamaica change its motto to “Out of many, one people.” Compare e pluribus unum.

The barefoot Caribbean postman (above) is in my collection. Carved mahogany, 19 in. tall. 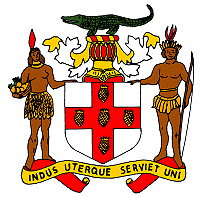 Jamaican Seal
Jim's Observations
The Scott Classic Specialized catalogue has, from 1860-1952, 152 regular, 3 semi-postal, 11 war tax, and 4 official major descriptive stamp categories: Total 170.
Of those, 86 are CV <$1-$1+, or 51%. Not surprisingly, the catalogue values are higher with the island's close proximity to the United States, and the fact it is a British Commonwealth country.
But it has no extensive rarities, so it can be completed to a high degree by the assiduous classical collector. 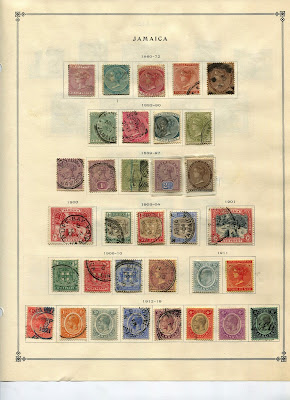 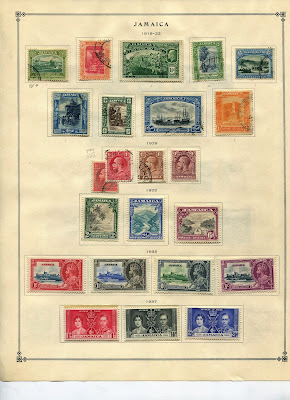 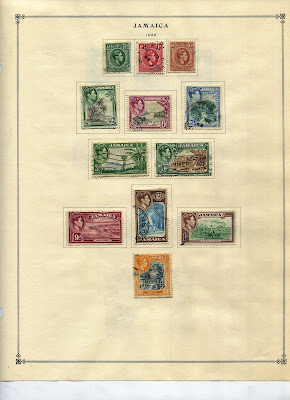 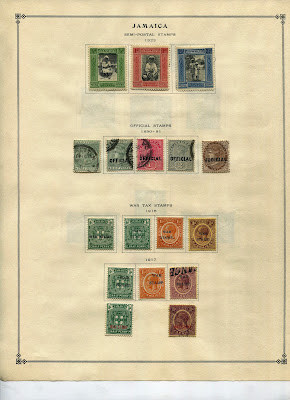 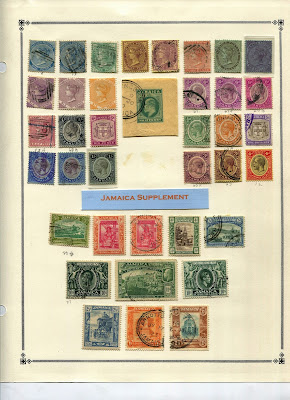