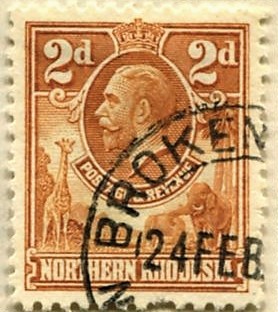 Northern Rhodesia #4, brown orange, Broken Hill cancel
Bud's Big Blue
Bud's Observations
A while back a friend of a friend asked if I’d give her an opinion about a stamp collection she had inherited from her great aunt Joan. We fell into a conversation about Scott #4 (see above) cancelled in Broken Hill, Northern Rhodesia, now called Kabwe, Zambia. It’s one of several stamps I bought from her. 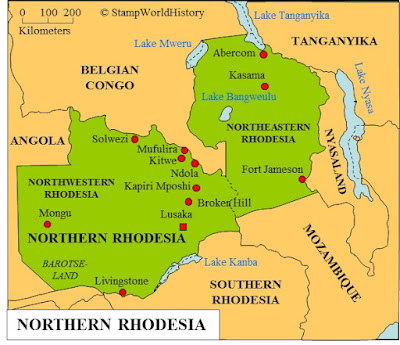 Our discussion about great aunt’s stamp collection and the cancelled Northern Rhodesia #4 inevitably led to the history and significance of Broken Hill – its metal mines, its role in Cecil Rhodes’ unfulfilled dream of a Cape to Cairo railway, and its archaeological treasures.

Great aunt Joan may have interested to know that Broken Hill had plentiful silver, lead, and zinc ore, but getting it transported and refined was a challenge. A railroad reached Broken Hill in 1906, four years after Rhodes died. While his dream may have inspired it, visions of big mining profits built it. A short way beyond Broken Hill, “the Cape to Cairo railway came to an end in the middle of a burnt out vlei [dried up swamp] without even a buffer-stop at the rail terminus” (1). 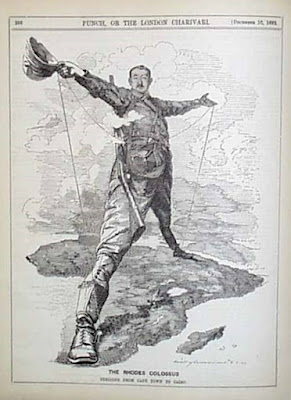 The Rhodes Colossus”, Punch Magazine, December 1892,
not to be confused with the ancient Colossus of Rhodes
(from my collection)

Worse, profits from mining failed to cover transportation costs (2). Rhodes’ vision nevertheless continued to warm colonists’ hearts until the 1930s depression ended all hope for it.

The Punch cartoon (shown above) is apt. Rhodes, a British mining magnate and politician in southern Africa, famously said “If there be a God, I think that what he would like me to do is paint as much of the map of Africa British Red as possible…” (3). He intended the telegraph lines, he holds them up in the cartoon, and the railway to bind African colonies securely to Britain. Post-colonial Africa, of course, scorns Rhodes’ views.

Our conversation moved along. Three years before Northern Rhodesia became an official British protectorate and it’s first stamps were issued (1924-25), a major archaeological discover was made in Broken Hill’s mining territory -- homo rhodesiensis, aka the Broken Hill skull. Much has been made of this fossilized skull of an extinct human species and how it fits into the genetic heritage of homo sapiens. Zambia currently is lobbying for the skull’s return.

Great aunt Joan, her grandniece said, was well read in anthropology. So, she may well have known about the Broken Hill skull. We speculated further; her Northern Rhodesia #4 may have traveled on Rhodes’ dream railway carrying a message about archaeological discoveries in Broken Hill’s mining territory. But probably not. 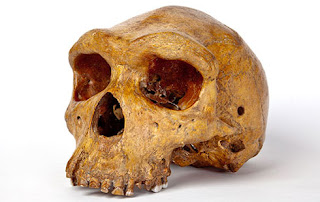 Our conversation meandered through several other parts of great aunt’s albums. At the end, the grandniece commented, “I didn’t know stamps provided such interesting windows into history.’ I suspect great aunt Joan knew that very well.

Census: 33 in BB space, eight on the supplement page.

Jim's Observations
Northern Rhodesia, the lands north of the Zambezi river, became a British protectorate in 1924 when the British South Africa Company (A Cecil Rhodes founded commercial endeavor) gave up administration, in exchange for cash. At the same time, Southern Rhodesia ( or "Rhodesia"), south of the Zambezi, was turned over to the white settlers, who established highly discriminatory laws against the black African majority.I look at the changing history of Northern Rhodesia through a series of maps. If interested, click on the blog link.
Northern Rhodesia Blog Post & BB Checklist
Page 1 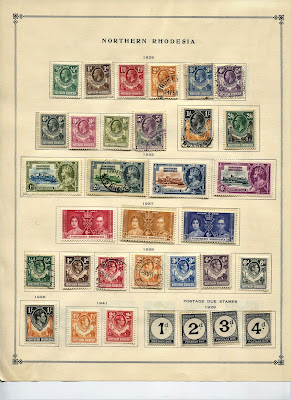 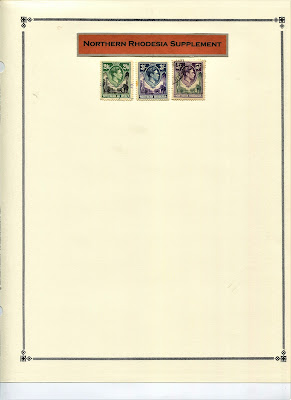