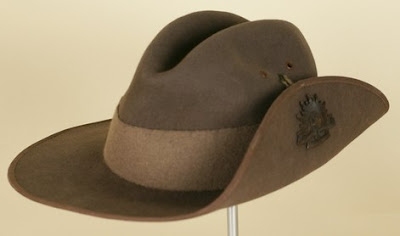 Australian World War I soldier’s khaki felt slouch hat
Bud's Big Blue
Bud's Observations
Australia’s first skirmish in World War I involved capturing a wireless installation in German New Guinea. They did this with dispatch and, ten days later, the German governor surrendered everything (September 21, 1914). Then, together with New Zealand forces, they went on to eliminate other German South Pacific holdings. Germany’s Pacific forces were unexpectedly weak and easily thwarted.

By the end of 1914, Australia controlled the area. Early in 1915 they set up a military occupational force that remained in place for the duration of the War. New Zealand’s part of the story will be picked up in the forthcoming Bud’s Big Blue post for Samoa. 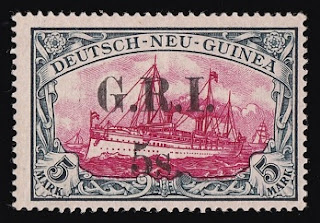 New Britain #15 (not in my collection)

They came up with two stopgap solutions. In October 1914 existing German New Guinea and Marshall Island stamps were overprinted "G.R.I." (Georgius Rex Imperator, referring to the incumbent British King) and surcharged in Australian currency. Befouling the Kaiser’s imperial yacht, Hohenzollern II, must have been gratifying for the triumphant Aussies. Probably unbeknownst to them, the Germans had already decommissioned Hohenzollern II (July 1914).

New Britain #3 (not in my collection)

Scott’s catalog lists 42 varieties of these sullied Hohenzollerns under the heading of New Britain, but Big Blue (BB) provides no spaces for them. Stanley Gibbons counts 79, plus many minor variations. Supplies were limited and the stamps quicky became too expensive for representative collections.  They still are.

In March 1915, the GRIs were replaced by Australian stamps with "N. W. Pacific Islands" overprinted.  BB provides room for seven of these. The NWPIs continued in use until 1924, three years after the League of Nations mandated the territory to Australia, thereby ending the military government and replacing it with a civilian administration. Scott lists 49 NWPIs while Stanley Gibbons SG has 59 plus a host of variations.

Germany lost all its colonies after the war and, for several years, ceased having influence in the South Pacific.

Most of the world, except for Australia, New Zealand and the South Pacific islands, has forgotten the history behind these stamps. BB’s seven NWPIs help us remember.

They are unremarkable from a design point of view – roos and royalty with black overprints. Yet a lively group of specialists and “fly-speck” lovers emerged because the overprints are not always neat. Some NWPI devotees detect a purple color variation in the overprints, but Stanley Gibbons says it probably isn’t the case, at least not anymore even if it might have been many years ago. The overprints now all look black. The Australian stamps, moreover, had their own anomalies before being overprinted – die variations, slight design flaws, color shades and inverted watermarks.

So, specialist have a NWPI playground. If you’re interested in fly speck mania, check out “The Overprints of NW Pacific Islands - New Guinea 1914-25” at https://www.stampboards.com/viewtopic.php?f=33&t=60313.

If, on the other hand, you’re more interested in the role of philately in the complexity of New Guinea’s history, I recommend as a starting point:

By scattering New Guinea and Pacific island stamps throughout the album, BB does a poor job of presenting a coherent picture of the region’s philately. One needs to traipse through separated sections for German New Guinea, Marshall Islands, NWPI, New Guinea, Nauru, Samoa and….

My NWPI collection has two cancelled stamps, both from Nauru. One is marked Pleasant Island, that being the name given to Nauru by early European voyagers. Although the Pleasant Island label persists as an unofficial name, today Nauru is not so pleasant. See why in Bud’s Big Blue post for Nauru (click here). 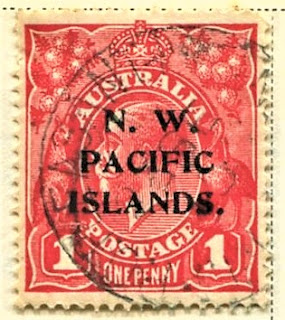 Jim's Observations
Per Bud's discussion on cancels, these are my comments for my collection shown in link below..
"Note the "Rabaul" and "New Britain" postmark? The "N.W, Pacific Islands" overprinted stamps were mostly used on New Britain and Nauru during the 1915-22 period of use.
North West Pacific Islands Blog Post & BB Checklist
Page 1