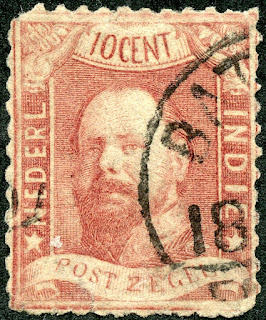 1868 Scott 2 10c lake "King William III"
Engraved; Perf; "Batavia" postmark
Into the Deep Blue
The Dutch Indies (the name in Big Blue), or Netherlands Indies (the more accepted name) was a Dutch colony on a series of islands in the East Indies. Stamps for the colony were issued throughout the classical era (1864-1940).

Netherlands Indies
Map courtesy of Stamp World History
For more on the background and history see:
Dutch Indies Blog Post & BB Checklist
This blog post will look at some of the stamps and issues from 1864-1908. 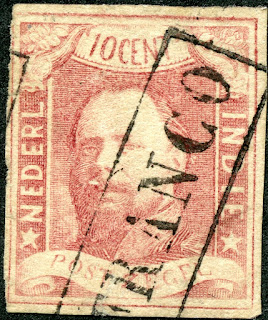 1864 Scott 1 10c lake "King William III"
Engraved; Imperf
The first stamp issue for the Dutch Indies was an unwatermarked engraved close-up portrait "King William III" imperforated 10c lake stamp that was released April 1, 1864. The half-facing portrait was one that is not found on Netherlands stamps proper, so increases the interest. I wonder how much he enjoyed being king? He looks reluctant here, doesn't he?
A perforated version (Perf 12.5 X 12) was released in 1868, and is shown here as the "header" stamp above.
CV is $100 for the 1864 unperforated stamp, and $150 for the 1868 perforated variety.
I checked Stamp Forgeries of the World website, and these Scott 1 & 2 appear genuine. 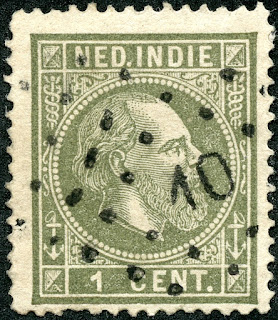 1870 Scott 3 1c slate green "William III"
Type I
Between 1870-88, a typographed fourteen stamp set featuring William III in side portrait was issued.
There are multiple different perfs known (see catalogue for specifics).
The "1 cent" has two types. Type I (above) has "CENT" 6mm long. 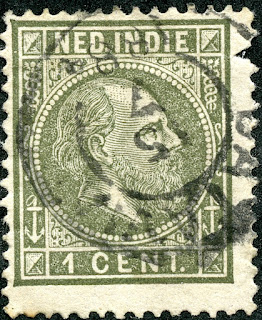 1876 Scott 4 1c slate green "William III"
Type II; Batavia postmark
Type II has "CENT" 7.5mm long.
Scott also breaks out perfs that are "small holes" (minor numbers) for the issue. "small holes" are defined as "spaces between the holes wider than the diameter of the holes". See the 2.50g stamp below as an example. (The Michel catalogue not only breaks out the small holes, but also includes the perf for the stamp.) 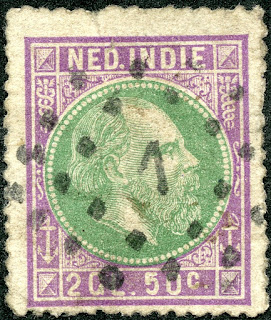 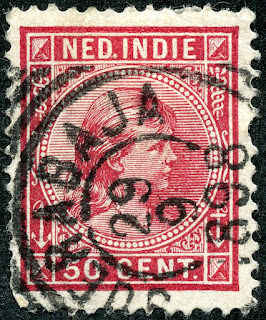 1893 Scott 29 50c carmine
"Princess Wilhelmina"
"Soerabaja" postmark
Between 1892-97 an eight stamp set showing Princess Wilhelmina was issued. The portrait appears to be the same as the Netherlands 1891-96 issue. She actually ascended the throne at age 10 in 1890, but under her mother's regency (Queen Emma), until age 18 (1898), when her mother's regency ended.
I picked out this stamp to illustrate the issue because of the postmark. Surabaja is now a port city on the island of Java. 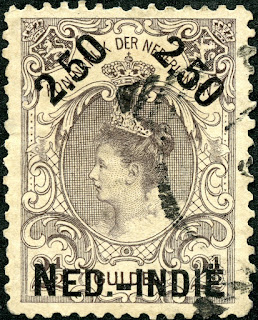 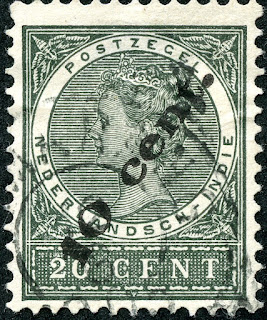 1905 Scott 58 10c on 20c greenish slate "Wilhelmina"
Surcharged in Black
Between 1903-08, a ten stamp set with the circular portrait of Queen Wilhelmina was issued. An example is shown heading the "Out of the Blue" section below. CV ranges from <$1 to $2.
In 1905, the 20c greenish slate from the issue was surcharged in black, as shown above. CV is $2. 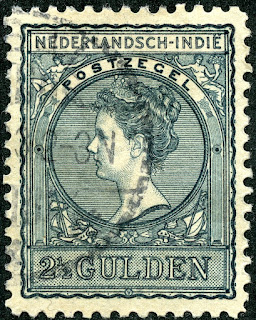 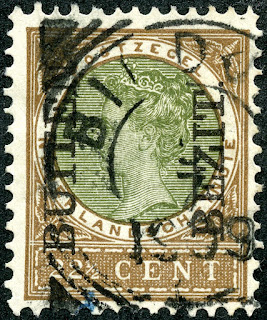 1908 Scott 75 22 1/2c brown & olive green "Wilhelmina"
Previous Issues Overprinted "Buiten...Bezit."
For the territory outside of Java and Madura, in 1908, eighteen previously issued stamps were overprinted as shown (above). 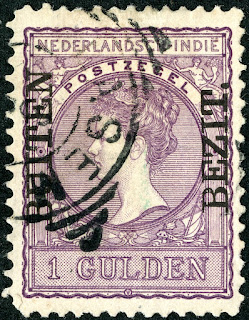 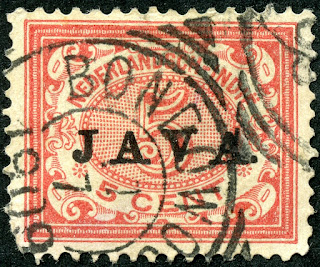 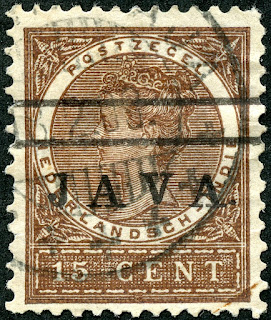 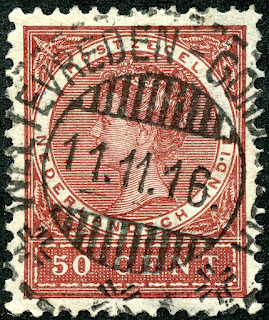 1904 Scott 57 50c red brown "Wilhelmina"
Out of the Blue
Well, that was fun! I suspect a postal history collection of early Dutch Indies stamps on cover would be interesting indeed.
Comments appreciated!
Posted by Jim at 7:00 AM