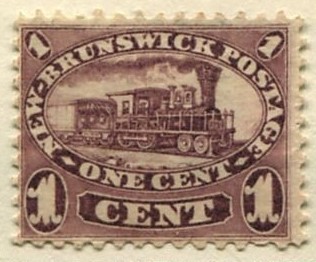 New Brunswick issued only a few stamps (eleven, in Scott’s listing), but four of them are philatelic firsts -- first train on a stamp, first steam and sail ship, first commemorative and, audaciously, first stamp with the image of a postmaster on it.

Each of these four has generated no end of commentary by collectors and specialists. Exactly what locomotive is it? What boat? Why was Prince Albert Edward (Bertie, the future King Edward VII) commemorated? Why on earth did postmaster Charles Connell commission his own picture on a stamp?

The wood-burning locomotive on Scott #6 is supposed by traditionalists to be the Ossekeag, an engine owned by the newly opened and extravagantly named European and North American Railway line. Train buffs say it more closely resembles the Coos 4-4-0. Probably, though, it was meant to be the Ossekeag because one of the railway directors was postmaster Connell. But artists at the American Bank Note Company, where he had commissioned the stamps to be made, didn’t know what the Ossekeag looked like. 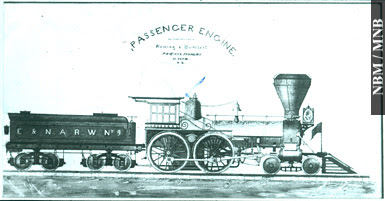 European and North American Railway Engine #9, Ossekeag
Similarly, the ship on 12½-cent stamp (Scott # 10) is unclassifiable except in generic terms. It might be the “Royal William”, the first steamship to cross the North Atlantic 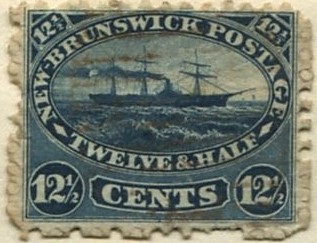 Scott #10, blue
Or it might be the “City of Washington”, a mail boat steaming/sailing between New York and Southampton in the 1850s. 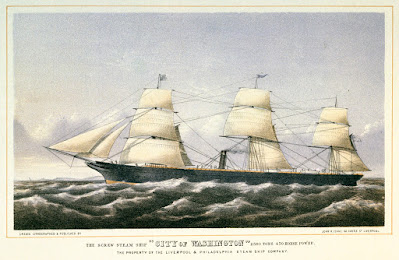 There is, of course, no mistaking the image of the Prince of Wales (Edward VII) outfitted as a teen-aged highlander. Postmaster Connell intended the stamp to commemorate the Prince’s 1860 royal tour of Canada. He was the first royal to appear on a colonial stamp other than his mother, the Queen. A 17 cent stamp would carry a letter from New Brunswick to England by way of New York. 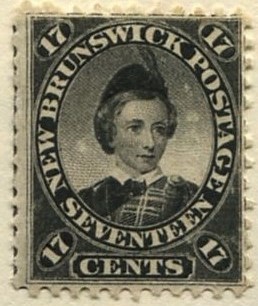 The photograph used by the engravers is available online. 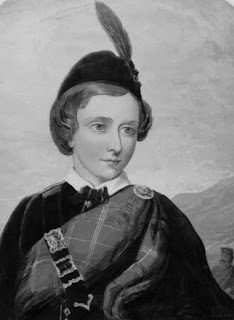 https://www.gettyimages.com/detail/news-photo/albert-edward-prince-of-wales-and-the-future-king-edward-news-photo/150713057 (Shown here for educational purposes)
Postmaster Connell authorized a photo of himself for the 5 cent stamp (Scott #5). It was a cocky step too far, resulting in immediate scorn. It should have been the Queens’ image, not his. He then quit (was fired?) as postmaster even though he offered to buy all the stamps and burn them in his front yard. A few escaped the blazes, though, and have become extreme rarities. Unsurprisingly, counterfeits exist, as they do for all New Brunswick stamps. 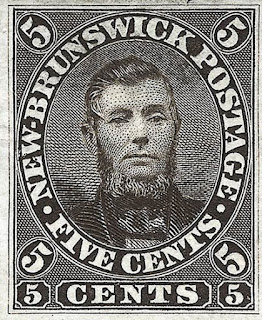 Scott #5, plate proof
(Obviously, not in my collection)

Postmaster Connell’s 1860 series used cents (dollars) rather than pence and shillings as the value denomination. This currency was on a par with the Canadian dollar, by which it was replaced in 1867 when New Brunswick joined the Canadian Confederation.

Census: six in BB spaces, two on supplement page, both duplicates of those in BB spaces
Jim's Observations
For Big Blue, the entire six stamp 1860-63 issue is given a space- the good news for this gorgeous issue.The bad news, for the price aware collector, is the entire selection crosses the threshold for "expensive" stamps. And four stamps meet the $35 criteria for "Most Expensive" stamps, with a CV ranging from $37+-$77+. !But, since I have a particular like for these stamps, I, for one, am pleased
New Brunswick Blog Post & BB Checklist
Page 1 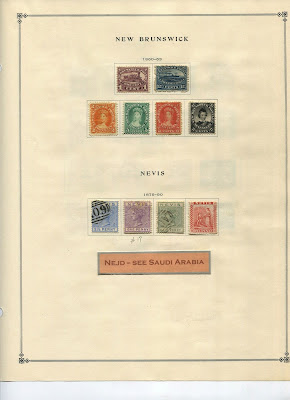 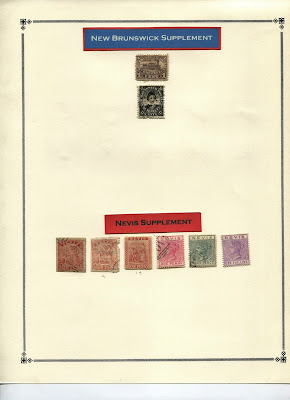