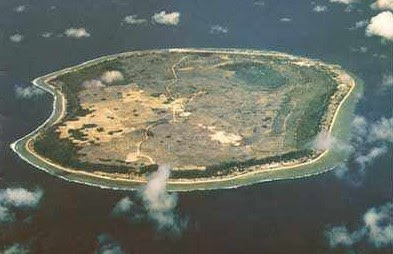 A riddle: what is one of the smallest, most isolated countries in the world but, at the same time, is one of the largest and very near-by countries? In fact, it spreads out almost everywhere.

Another clue: It’s small because it’s an eight square mile dot in the Pacific Ocean. It’s isolated because it’s not close to anything except the equator.

Another clue: It’s large because the phosphate rock mined there has been shipped all over the world as fertilizers, animal feed supplements, food preservatives, baking flour, pharmaceuticals, anticorrosion agents, cosmetics, fungicides, insecticides, detergents, ceramics, water treatments and metallurgy additives. There’s a chance that we walk on part of this country every day.

Another riddle: What country was one of the wealthiest per capita a few years ago, but now is among the poorest? They had, then lost, it all.

A Clue
A final riddle: What country used to be called Pleasant Island and was lush with flora and fauna, but now is largely a polluted, strip-mined wasteland? Notice the shore line palms at the left of the clue

A Final Clue
The above philatelic clues, of course, foretell the boom/bust history of Nauru. Freighters were carrying away Nauru back in 1924 when this stamp series was issued, and they continued to do so until the phosphate mines were completely plundered (about 2002). Then, Nauru collapsed. Even Air Nauru’s one jetliner was repossessed.

Judging from the feeder albums I’ve plundered to build my stamp collection, Nauru’s stamps have been spread out almost as widely as their phosphate rock. Mint examples, as most of mine are, cost me less than a comparable amount of phosphate; good used Nauru stamps would likely cost considerably more than phosphate, but I don’t have many of those.

Census: 22 in BB spaces, one tip-in, eleven on the supplement page.

Jim's Observations
What can we say about tiny isolated Nauru?This little oval shaped phosphate rock encrusted coral atoll is only 8 square miles in area, and is located in the South Pacific Ocean on the equator south of the Marshall Islands. It is surrounded by a coral reef, so only small boats may access the island.
The original settlers were Micronesian and Polynesian. The island was annexed by Germany in 1888, and attached to the Marshall Islands.
As luck would have it- or curse-, Phosphate (From seabird guano) was discovered on Nauru in 1900, and eventually, 80% of the island was strip-mined.
For more on Nauru (If you can stand the depressing narrative), check the original post below...
Nauru Blog Post & BB Checklist
Page 1 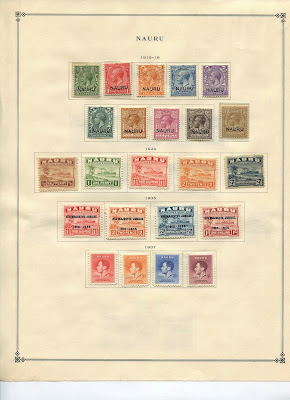 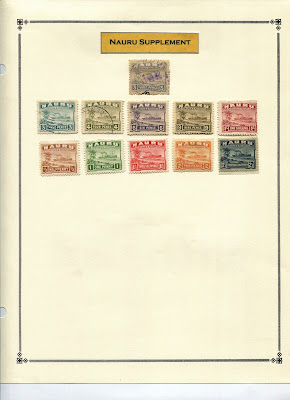