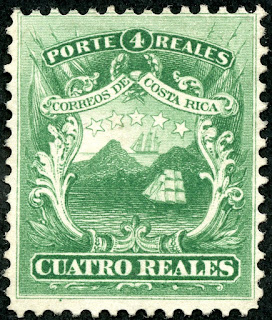 1863 Scott 3 4r green "Coat of Arms"
Into the Deep Blue
I published a blog post back in 2011 about Costa Rica that was long on information, but short on stamp illustration.
Costa Rica Blog Post & BB Checklist
Well, this post will rectify that. ;-)
Costa Rica is somewhat more straightforward for WW collectors than some other Central/South American countries. For one, the majority of stamps issued between 1863-1910 were engraved (not by Costa Rica - obviously it was contracted out). That cuts down on the "shenanigans" (Forgeries) that can occur with local printing methods such as lithography. However, any surcharges/overprints on issues (1881-82, 1911, 1903 Officials) are ripe for counterfeits.
The other occurrence is, in 1914, the government sold a large portion of formerly issued stamps (1901-1911 regular issues, 1903 postage due, 1901-03 Officials) as discount Remainders, marked by a thin parallel bar cancellations. These sell for much less than normal CV.
OK, let's take a look at issues of Costa Rica between 1863-1921.....
A Closer Look
8 Reales = 100 Centavos = 1 Peso
100 Centimos = 1 Colon (1900) 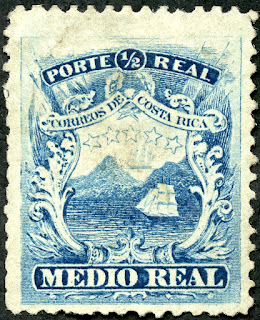 1863 Scott 1a 1/2r light blue "Coat of Arms"
The first release, in 1863,  for Costa Rica, was a four denomination engraved issue.
The 1/2r denomination was printed with two plates. The second plate was printed in light blue, and shows little or no sky over the mountains (above- Scott 1a). The first plate (not shown) for the 1/2r denomination was printed in blue. The sky markings (horizontal lines) can be seen with the 4r green stamp illustrated above for the blog post header.
CV ranges from <$1 to $40+.
Although I don't have any examples, I should mention that, in 1881-82, three denominations (1/2r, 2r, 4r) from the above "Coat of Arms" issue were surcharged in red or black, creating seven major Scott numbers (Scott 7-15). These are valued in Scott only as "unused" - CV $3-$300). Counterfeits exist. 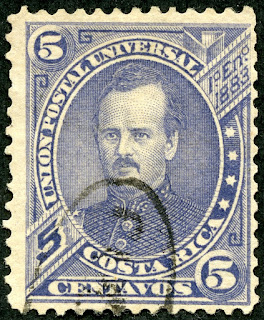 1883 Scott 18 5c blue violet
"Gen. Prospero Fernandez"
In 1883, a five stamp issue picturing General Fernandez, the President of Costa Rica between 1882-85, was released. Note that this issue was engraved. Rather handsome stamp. Scott has a note that the 1863-1887 era have stamps that are classified as VF, even if they have perforations just clear of the design on one or more sides. Since most of the stamps of Costa Rica were engraved from 1863-1910, I'm not going to mention the printing method again (assume engraved), unless it is different. 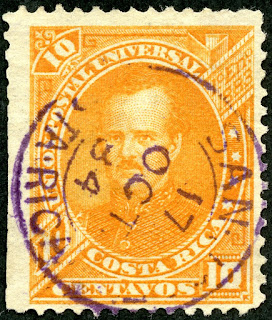 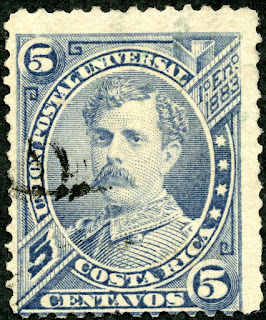 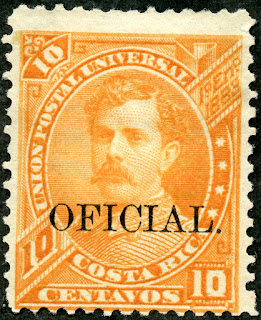 Official 1887 Scott O23 10c orange
"President Bernardo Soto Alfaro"
Overprinted
The 1887 10c orange was also used as part of a six stamp 1887 Official issue. I should mention, as is common for many Central/South American countries, Official stamps were issued frequently. Costa Rica has, in Scott, 94 stamps released between 1883-1937. 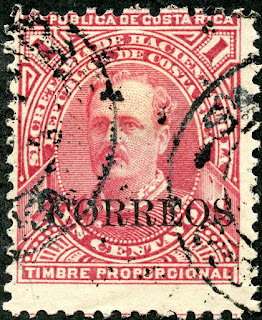 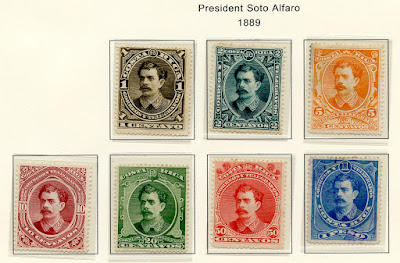 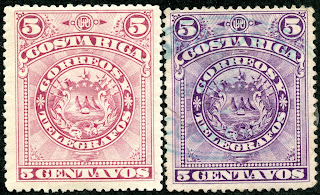 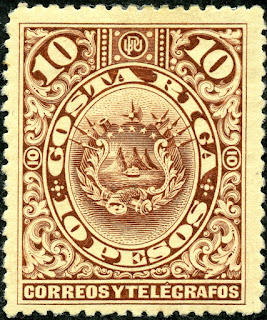 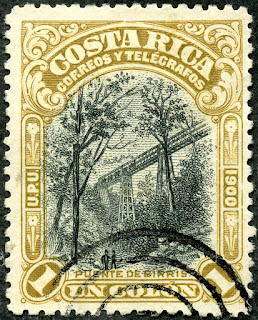 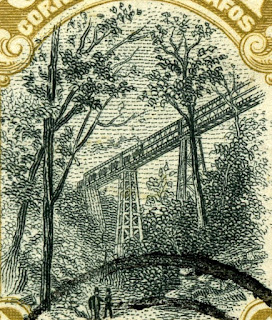 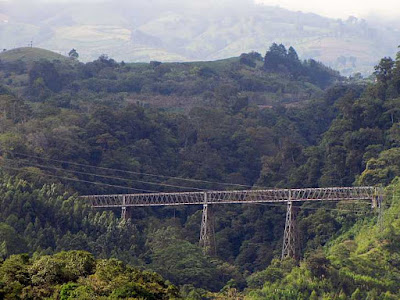 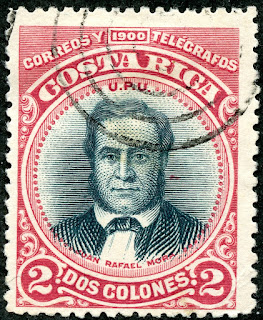 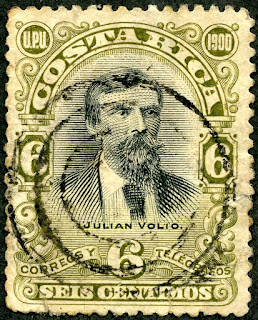 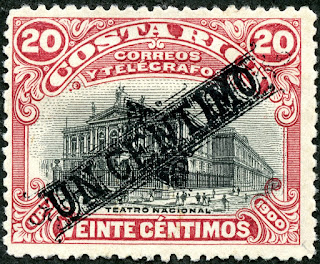 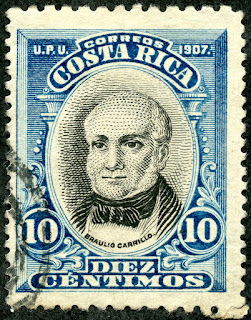 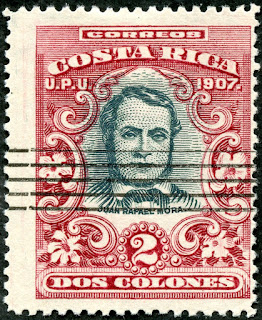 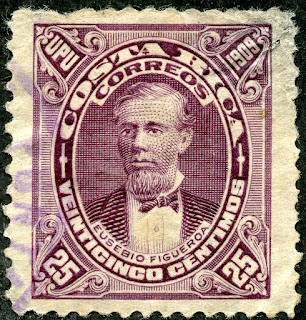 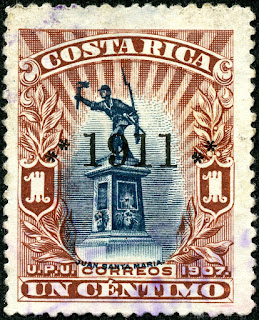 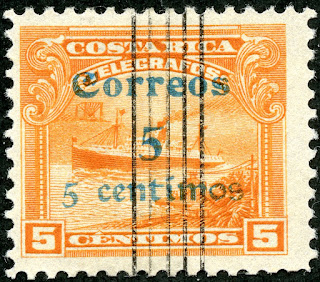 1911 Scott 100 5c on 5c orange, Blue Surcharge
Telegraph Stamps Surcharged
Remainder Cancel of 1914
Also in 1911, Telegraph stamps were surcharged for postal use in rose, blue, or black. CV for the 15 stamps is <$1 to $80+. Of course, remainder cancels (as above) would generally reduce value. But in this case, the stamp already has a low CV of <$1. !!
Scott does have a complicated note about this issue, as there are counterfeits and special concerns. 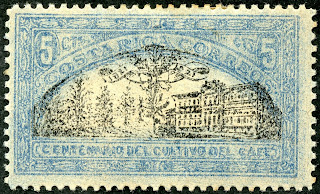 1921 Scott 103 5c blue & black
"Coffee Plantation'
Lithographed
Out of the Blue
The only stamp that is not engraved with this post is the one above: a lithographed large format 1921 "Coffee Plantation" stamp. Note the relatively crude look. Actually, it looks like, for regular issues, there were none after 1912 until this June 17, 1921 stamp, which celebrates a century of coffee raising in Costa Rica.
Comments appreciated!
Posted by Jim at 7:00 AM