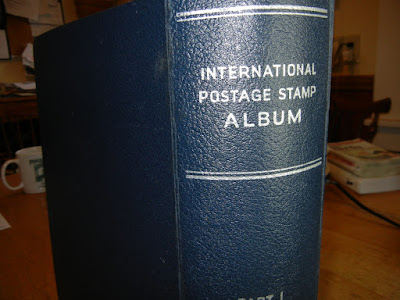 Big Blue 1840-1940
Scott International Album: Part I
Well, something needs to be said after successfully publishing the Big Blue blog for ten years!
It began on February 12th, 2011, the first blog entry... Overview.......
After 30 years of being away, I have delightfully resumed my 1840-1940 worldwide collection. After some deliberation, I settled on Scott International Volume 1 (Scott calls it Part 1) to house the accumulation. But what is this? No information on what is in this album? Rumor has it that Scott does not even have the information.Perhaps I can help. So I propose with this blog, using Scott catalogues, to systematically comb through all the stamp illustrations/descriptions for a country and make a "checklist". And to put the results here.
The Big Blue checklist took six years - 2017-  to complete.
/2017/04/the-big-blue-checklist-is-completed.html
In the meantime, my colleague Bud began commenting and showing his completed Big Blue, commencing on September 10, 2016.
Bud's Big Blue - An Introduction and Index
That work is on-going, and Aden through Mozambique is now posted. 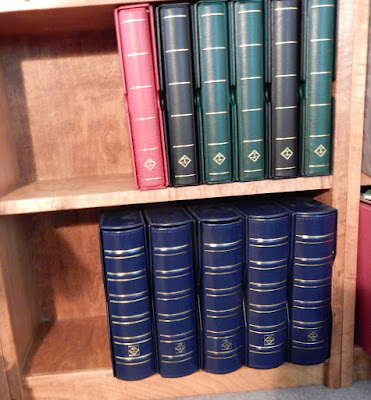 Deep Blue (Steiner) Pages housed in Vario F and Vario G Binders
Shown here is part of the Collection
For myself, I decided relatively early on that I would rather house my WW 1840-1940 (1840-1952 British Commonwealth) collection in Steiner pages ("Deep Blue"), which had a space for every Scott major number for the era. Of course, that expanded the housing needed to some 6,500 pages...and the footprint!  I initially used heavy duty Avery Binders, but then switched to the more attractive Vario F and G Binders.
Am I happy with that choice after ten years experience with Deep Blue? Absolutely! At the present, I have some 51,000 spaces filled out of a 83,000 space capacity.
Still, Bud's approach of using supplementary pages for those stamps without a space in Big Blue is also a viable choice. 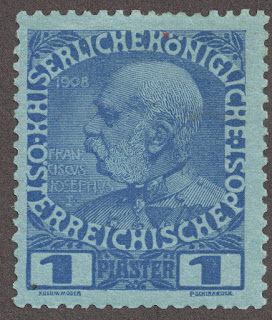 Big Blue's "Mascot" stamp: Austria Offices in Turkey
1908 1 Piaster Deep Blue on Blue
On reflection, I'm also pleased with my early decision to feature 1200dpi scan images of individual stamps, little pieces of visual art, in all their glory.
Out of the Blue
If the reader would scroll along the left column, there is much information and stamp images that have been published - in fact, ten years worth!
Enjoy all the thoughts and comments on classical era WW collecting that is here!
Jim Jackson
Posted by Jim at 7:00 AM