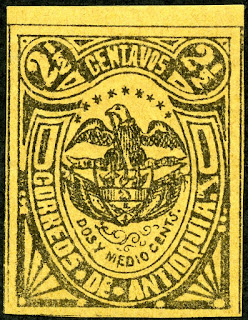 1886 Scott 56 2 1/2c black/orange
"Coat of Arms"
Into the Deep Blue
How can one tell that one is in the (exciting to me!) philatelic backwaters of the hobby? Perhaps an unconventional way is comparing the Scott 1840-1940 classic catalogue over the years. I believe Scott began replacing black & white stamp illustrations around 2004. By 2011, it was rare to find a black & white stamp illustration, because they had been replaced with colored ones. Yet, with the Colombian States, the 2011 catalogue still had 51 B&W illustrations - Wow! My 2020 Classic catalogue now has none - finally. !! 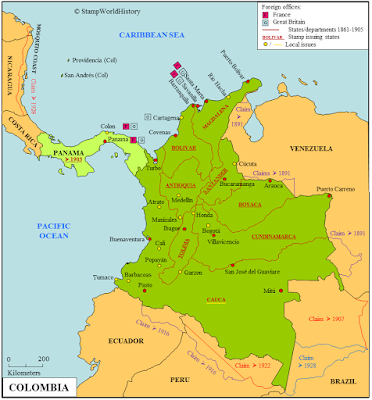 If you enjoy exploring the backwaters of an interesting era, then the Colombian States offer much!

"The United States of Colombia (1862-85) consisted of nine original States: Antioquia, Bolivar, Boyaca, Cundinamarca, Panama, Santander, Cauca*, Magdalena*, and Tolima. Naturally, all of them  issued stamps as early as 1863. After a new constitution was adopted in 1886, the States became Departments, losing their sovereignty. But the Departments retained some rights, including issuing stamps as late as 1904. It should be noted that Panama left the Republic in 1903.
* Cauca and Magdalena did issue "stamps", but they are not presently listed in Scott."

I thought we would revisit these Colombian States.

This is actually a big topic. I will illustrate some (what I have) of the stamp issues from each State/Department. To make it manageable, I will publish several posts. 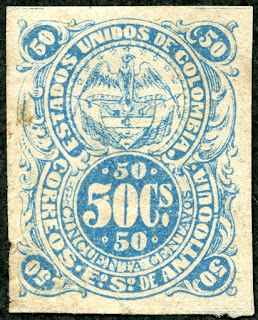 1873 Scott 16 50c blue
Imperforate, Lithographed
Most issues of Antioquia (Medellin the most prominent town) and other Colombian States stamps were lithographic printed, which give them a flat, somewhat primitive quality. Of course, Colombia itself had mostly lithographic issues during this era.

I actually wish I had more Colombian States stamps, as I find the issues fascinating, and frankly not that well known, and somewhat hard to obtain. And yet the CV prices tend to be in the $1's and $10's (There are exceptions of course). 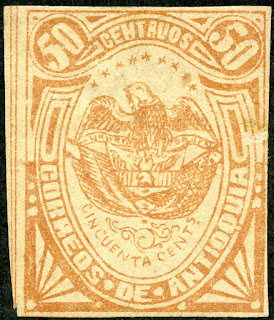 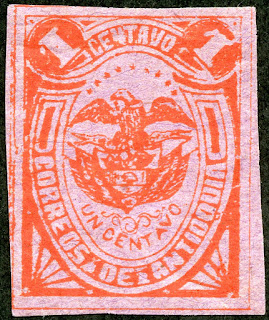 Just like Colombian stamps, there are forgeries extant for the primitive lithographic Colombian States issues also. (I can't guarantee that all of these illustrated stamps are genuine.) 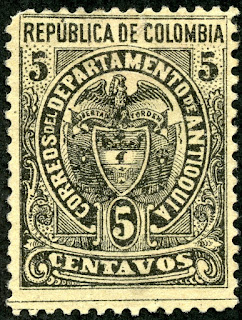 The "errors" of color found for the issue are essays or possibly reprints. 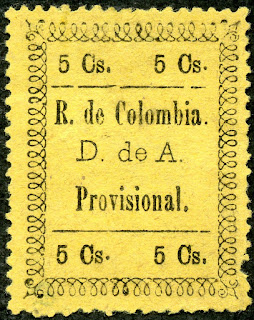 Printed by the 'IMPRENTA DEL DEPARTAMENTO' in Medellín, as a shortage of stamps existed. 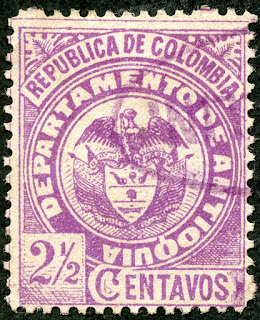 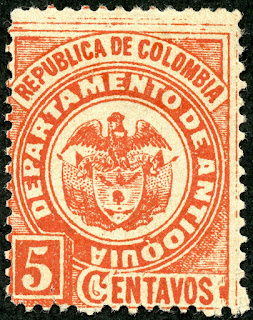 1893 Scott 95 5c vermilion
Lithographed
And in 1893, four more stamps in the same design, but different colors, were published. 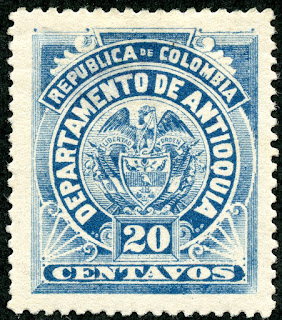 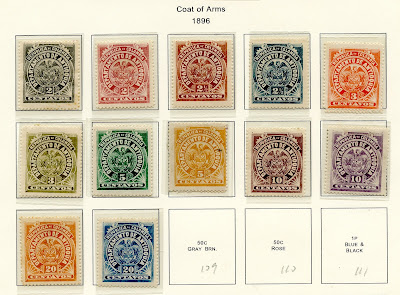 1896 Issue Scott 97-108
Although lithographed, the stamps have an almost engraved appearance. 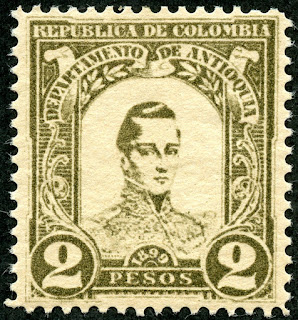 1899 Scott 127 2p olive gray
"General Jose Maria Cordoba"
In 1899, an eleven stamp lithographic issue with one design (as above) was released. They are still extremely ubiquitous in general stamp mixtures, and for many collectors, would represent their first introduction to Antioquia. I noticed when I had many Big Blue albums as feeder albums, invariably there would be some of these Antioquia stamps in them. 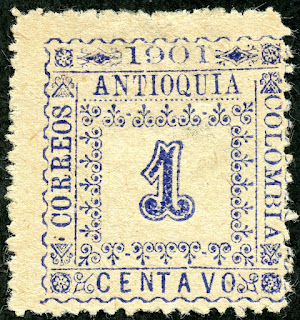 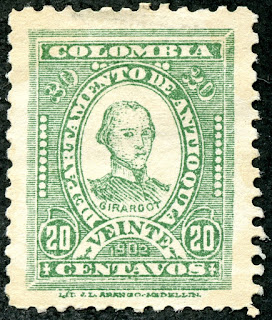 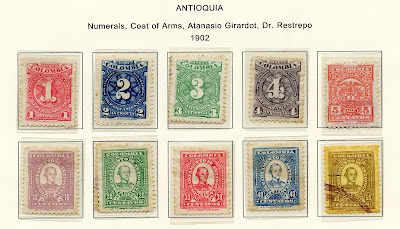 1902 Issue Scott 131-140
But what is truly more attractive - a set produced by a well know printing house in New York or London for a country, or a set that is produced "in house"? I vote for the latter. ;-) 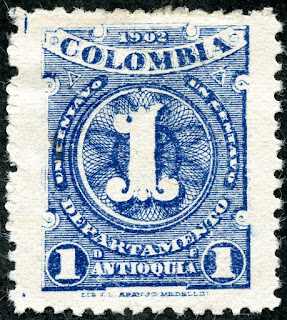 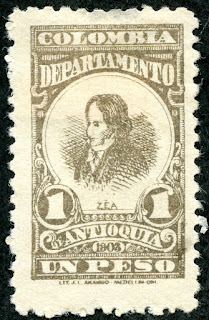 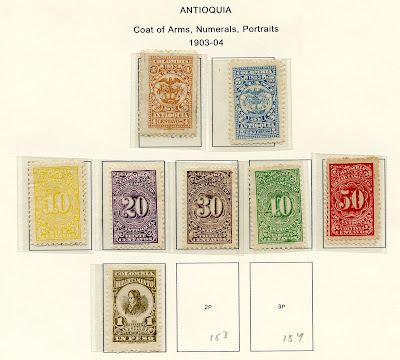 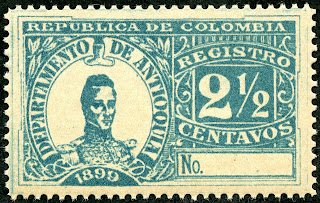 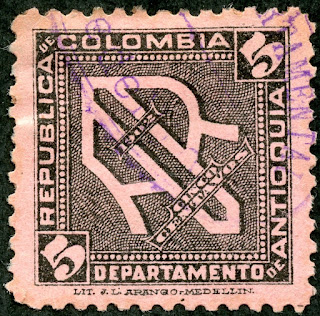 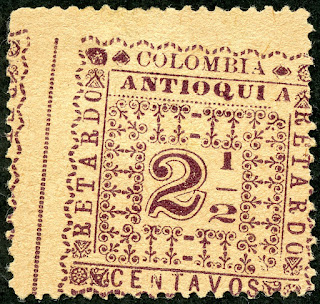 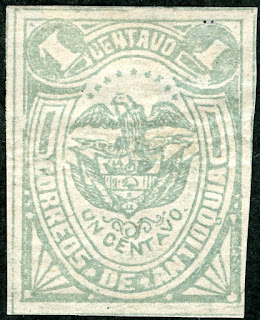 1896 Scott 55 1c green/pink
"Coat of Arms', Lithographed
Out of the Blue
Hopefully, this review of the primitive, but fascinating issues of Antioquia was found interesting!

Comments  Appreciated!
Posted by Jim at 7:00 AM