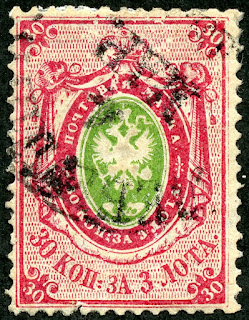 1866 Scott 25 30k carmine & green
"Coat of Arms"
Into the Deep Blue
If you are like me with my Russia collection, you have many of the stamps, but still have holes. Another Russia feeder album will not do as I already have most of the stamps - the cost of the feeder album may not pencil out and may not provide the stamps I need anyway.. What to do? So I turned to the APS stamp store, and started to fill some of the spaces! I like the APS stamp store, as the sellers (all APS members) tend to be more knowledgeable ( and dare I say ethical?) compared to the 'Bay, and one can return the stamps if misdescribed.

So what have I added to my Russia Deep Blue (Steiner pages) collection?

This post will show the newly acquired  1866-1934 stamps, and the next post will continue with 1934+ and into the back-of-the-book categories.

I should mention that Russian stamps can be tricky identification-wise, but my original post on Russia (with the BB checklist) shows many of the differences. If not, I will highlight the differences among stamp issues here. 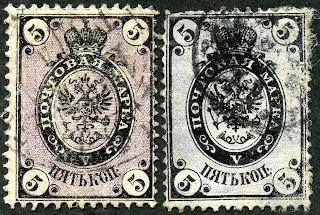 Be aware that the 1866-70 issue has horizontally laid paper, and Wmk 168 (Wavy Lines). Check my original post for examples. 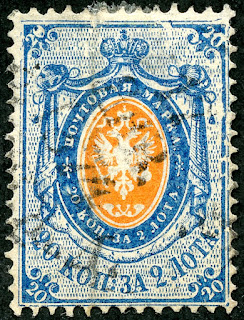 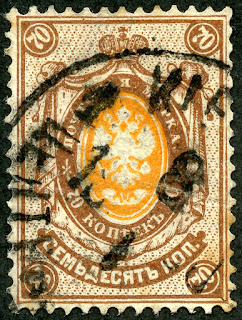 Be aware that this issue shows the post horns without the thunderbolts. 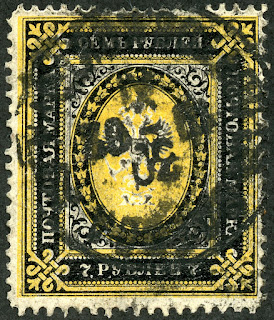 1889 Scott 54 7r black & yellow
"With Thunderbolts Across Post Horns"
For 1889 and later the Russian Empire stamps add a thunderbolt to the post horns. (See the original post for a close-up example.)

This rather heavily cancelled 7r black & yellow (CV $10+) was added. 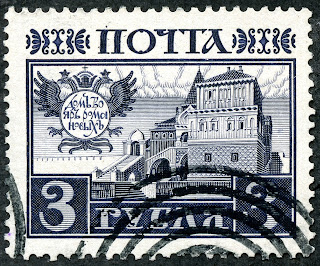 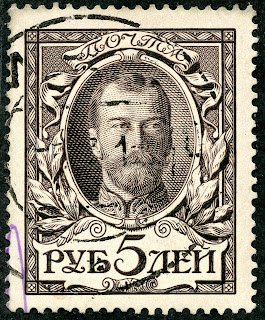 1913 Scott 104 5r black brown "Nicholas II"
Nicholas II was featured on the highest denomination for the 1913 issue (CV $10+). This Romanov Tsar cousin of the British George V would not go gently into that good night as we all know from history. 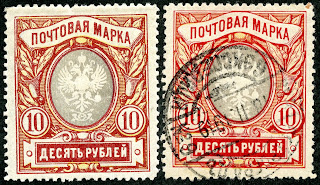 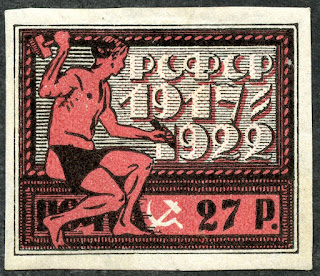 I should mention that Scott has a note that the currency of 1922 was valued at 10,000 times that of the preceding years. 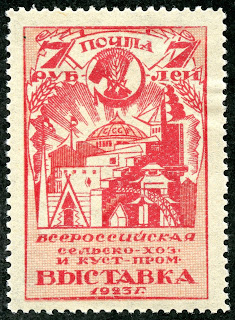 1923 Scott 249 7r rose & pink
"Symbolical of the Exhibition"
For the 1st Agriculture and Craftsmanship Exhibition, Moscow in 1923, an eight stamp lithographic issue was released. I picked up this stamp (CV $5) to complete the set. 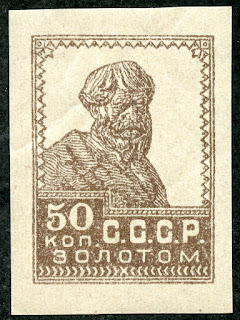 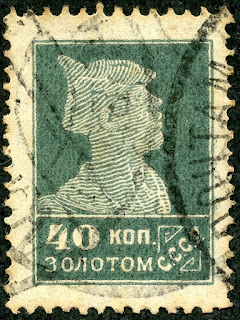 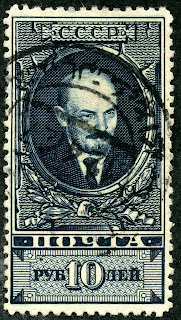 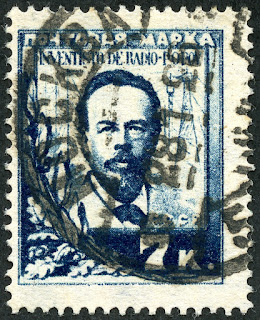 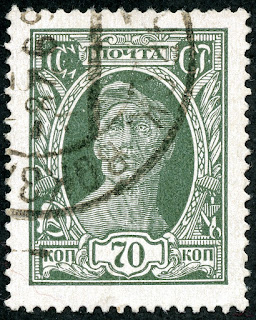 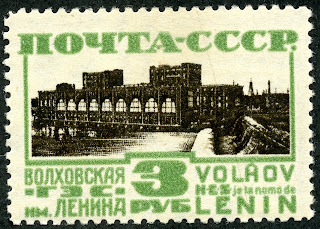 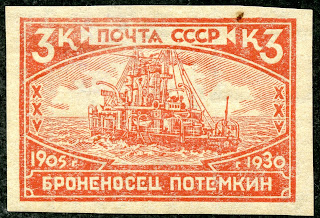 1931 Scott 452 3k red "Battleship Potemkin"
Imperf.
For the 25th anniversary of the Revolution of 1905, a three stamp issue was produced, both perforated and imperforate. The imperforate examples have a much higher CV ($10+-$20+ unused) then their perforate brethren (CV <$1-$1+). 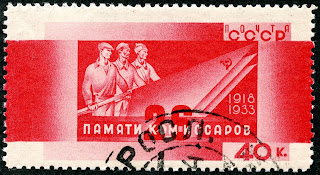 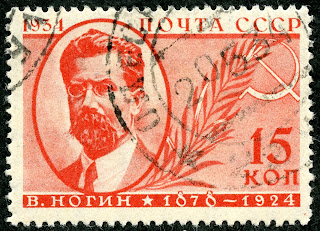 1923 Issue - Scott 246-49
Deep Blue (Steiner) provides a space for all the major Scott numbers. That is good news and bad news. Good news- one has a space available for new acquisitions. Bad news- the empty spaces one has are obvious. ;-) 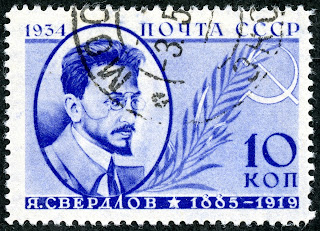