Antigua - A closer look at the stamps and issues 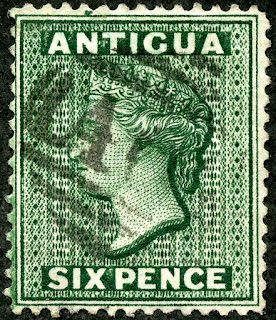 As the reader knows, I've finished a once over with all the countries from Aden-Zululand. But the earlier country blog posts got short shrift with a review of the stamps themselves. I plan to now go back and take a closer look at the stamps and issues. Hence, here is an auxiliary post for Antigua. 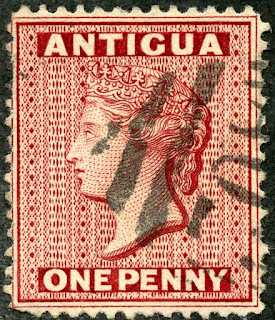 The first stamp, a 6p blue green,  for the Antigua Crown Colony was issued in August, 1862. It had an engraved portrait of Queen Victoria (after a drawing by Edward Corbould) by the London printer, Perkins, Bacon. Three more stamps were issued between 1863-67 on Wmk 5 "Star" paper.

In 1872, De La Rue took over the printing, using the Perkins, Bacon plates. 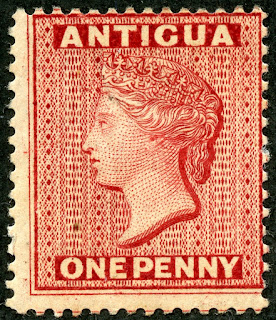 Clearly, watermarking, as well as checking perforations, is important for these Victorias. 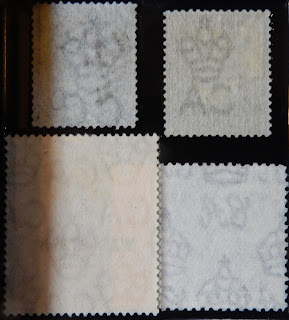 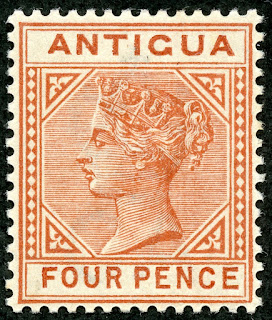 As noted, use of Antigua stamps proper ceased in 1890, and only "Leeward Islands" stamps were issued.

But production for Antigua resumed in 1903 with a ten stamp "Seal of the Colony" issue. The "Seal of the Colony" design continued with an eight stamp 1908-20 issue. I won't show an example here, but the "War Tax" stamps of 1916-18 - illustrated later in this section- show the design. 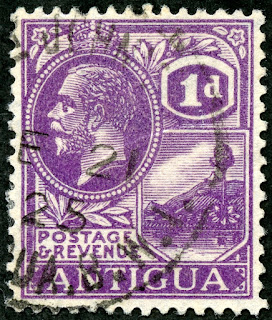 This example shows a Wmk 4 stamp on ordinary paper. 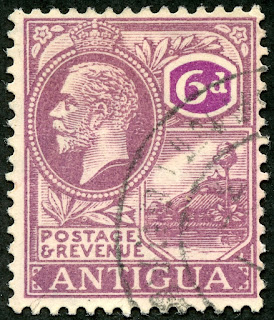 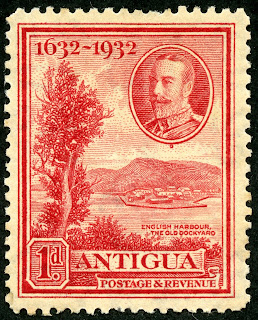 1932 Scott 68 1p scarlet
"Old Dockyard, English Harbour"
For the Tercentenary of the colony, a ten stamp engraved pictorial was released with four scenes.

The 1p scarlet shows the Old Dockyard at English Harbour. English Harbour was in use by the British since 1704 as a garrisoned station. Horatio Nelson served as a captain there between 1784-1787 for the Leeward Island Station. The Dockyard was significantly improved during Nelson's tenure, and is referred to today as "Nelson's Dockyard".

The Royal Navy abandoned the Dockyard, and it  fell into a state of decay after 1889, hence the stamp image refers to the "Old Dockyard".

But, the Dockyard was restored in 1951, and is now a major tourist attraction. 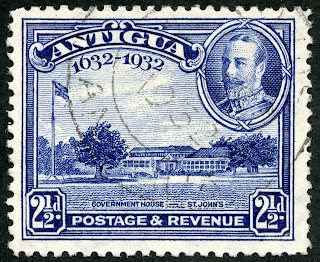 1932 Scott 71 2 1/2p ultramarine
"Government House, St. John's"
This Government house - pictured on the 2 1/2p ultramarine- is naturally where the governor of the Leeward Islands resided. The current building, which still exists, was selected in 1800, and then improved.  The first building burned in 1710, and the unpopular governor, Colonel Daniel Parke, was beaten and killed by an angry mob. 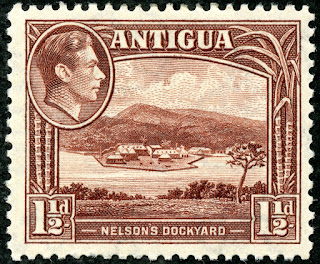 Of interest, Scott lists a number of minor number color shades defined by year of issue for the various denominations.

Nelson's Dockyard was named, as already mentioned, for Admiral Horatio Nelson who lived there between 1784-87.

It is now a cultural heritage site, and it is part of Nelson's Dockyard National Park. 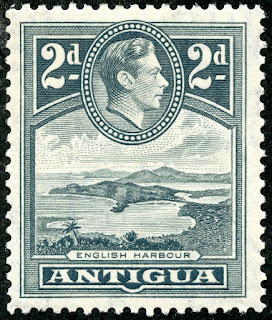 1938 Scott 87 2p gray "English Harbour"
Located on the south of Antigua Island, English Harbour was the base of operations for the Royal Navy, not least because they had a direct view of Guadeloupe Island and the rival French. 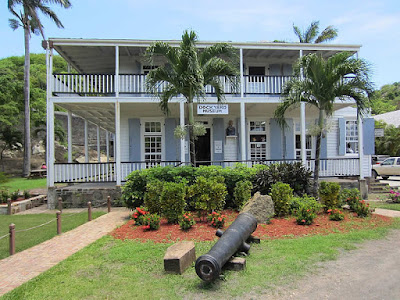 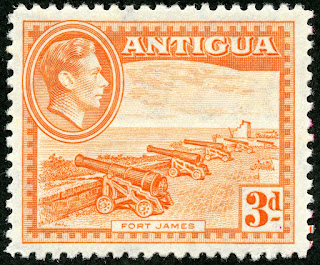 1944 Scott 89 3p pale orange "Fort James"
Fort James (named after King James II of England) is at the entrance to the harbor of St. John's on Antigua. 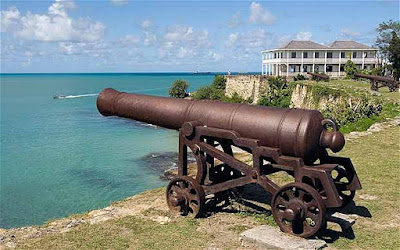 Ft. James
The fort was built from 1706-1739  to forestall a French invasion (which never occurred). Today, only one cannon is left. 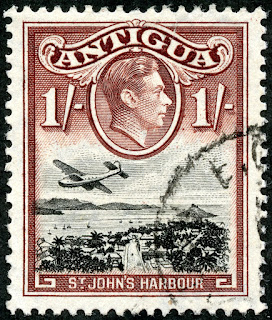 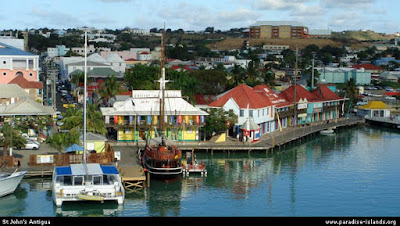 St. John's Today
Yes, the tourist trade is now ascendant with colorful houses and scenes. Antigua is now promoted  as luxury Caribbean destination. In fact, my niece had a destination island wedding there last year. 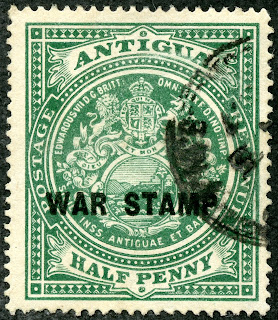 The "War Tax" stamps were overprinted in London. 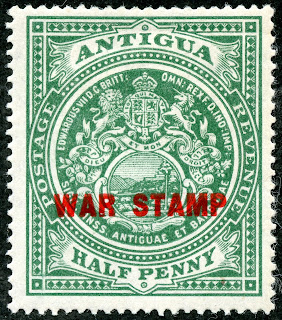 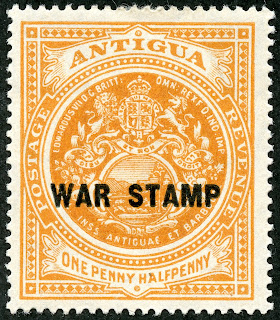 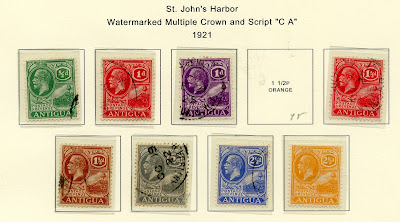 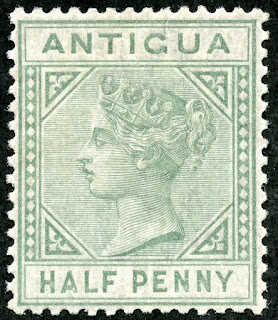 1882 Scott 12 1/2p green "Victoria"
Wmk 2
Out of the Blue
Reviewing the stamps and scenes on stamps for Antigua was worthwhile. I learned more about the history behind the images. !!

Note: Ft. James pic and St. John's pic appear to be in the public domain.
Pic of the Dockyard Museum is courtesy of the author-
By David Stanley - Flickr: Dockyard Museum, CC BY 2.0, https://commons.wikimedia.org/w/index.php?curid=24985402