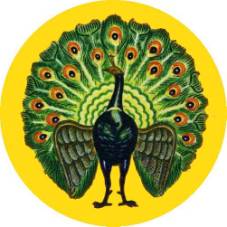 Green Peafowl
Bud's Big Blue
Bud's Observations
For most of BB’s timespan, Burma used the stamps of India; the British preferred administering Burma through Indian agency. Because of anger and protests about this arrangement, the British granted Burma a constitution and free elections in 1937. The British may have been looking for an easy exit from a problem situation, but World War II intervened with far greater problems.

Even though George V had died, India stamps with his likeness were overprinted “Burma” for the first issue. Shortly afterward (1938) these were replaced by George VI stamps. The latter have greater appeal. On the three through nine pies stamps, the king is guarded by two Chinthes -- lion-like creatures commonly seen at entrances to Burmese pagodas and temples. On the one through four annas, he is flanked by even more powerful Nāgas (Nayars or Toenayars) --snake-like creatures with dragon heads and four legs. They are said to fly and swim on dry land.

Pictorials in this series show both great wealth (royal barge, sail boat on the Irrawaddy) and hard labor (rice plowing, teak exploitation). The green peafowl is prominent, although shown neither in green nor obviously dancing, as it is in royal Burmese iconography. In three of four appearances, however, it’s tail is spread in dancing position.

If the number of Burma stamps overprinted “service” found in feeder albums is a reliable indicator, official correspondence accounted for a large percentage of postal volume (see supplement page).

Jim's Observations
Most of Burma's Big Blue stamps are inexpensive; although there is a $10+ and a $20+ stamp.
An easy way to expand one's collection of Burma is to collect the eleven Official stamps , each for <$1. 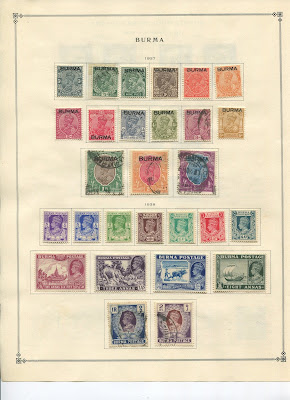 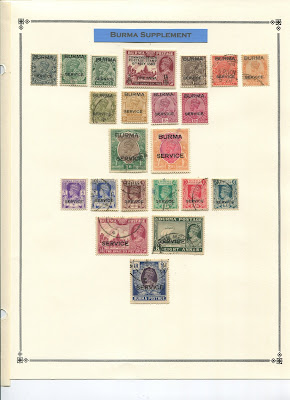