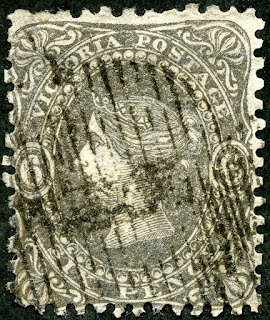 The colony was named, of course, for the Queen, and naturally all of stamps depict the monarch with images attractive and unattractive (but realistic!). 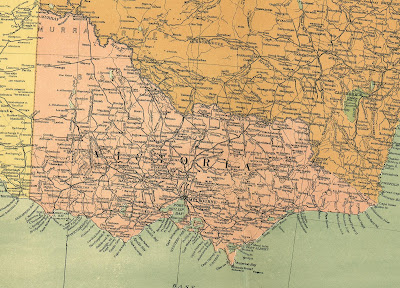 1916 map of Victoria
Because of gold, Melbourne became the financial center of Australia.

Between 1901-1927, while Canberra was under construction, Melbourne was the capital of Australia. It was, in fact, the second largest city (445,000 in 1889) during this period in the British Empire next to London. (Melbourne is absolutely my favorite city in Australia. The sidewalk cafe scene is so civilized. The Royal Botanical Gardens are astonishing.)

Stamps were introduced on January 3, 1850, with the production of the "Half Length" Queen Victoria by Thomas Ham of Melbourne. In fact, local printers were used for most of the stamps produced up to 1859. Naturally, these stamps are rather expensive today, and a fertile field for the specialist.

Although Victoria joined the Commonwealth of Australia in 1901, stamp production continued for Victoria through 1912. The Australian 'roos were issued in 1913. 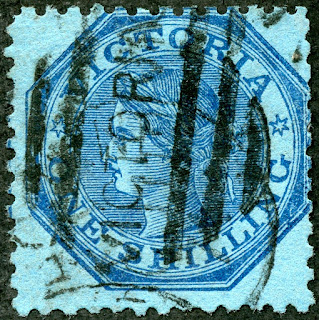 It is a great complex "dead country" to collect for specialists, with all the shades, watermarks, perforations, die states, and printings. One will also need deep pockets.

For a knowledgeable approach, one should have, at least, a good comprehensive Stanley Gibbons catalogue. ( The Commonwealth & British Empire Stamps 1840-1970 catalogue is what I have.)

But the WW collector can have fun with the stamps too. Be aware that many of the stamps are very heavily cancelled, and the perforations often cut into the stamp. A picky condition collector might be frustrated with Victoria. 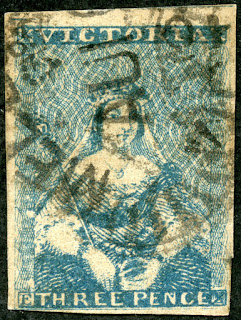 Because the central horizontal band of the orb protrudes at left, this is considered a Type II by Scott. As frame lines have been added, SG labels this a "third state" die. 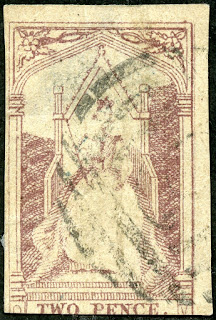 1854 Scott 16 2p brown lilac
"Victoria on the Throne"
Lithographed
The "Victoria on Throne" 2p stamp was initially engraved by Ham in 1852, but then lithographed by J.S. Campbell of Melbourne in 1854, using transfers taken from Ham's engraved plate.

Note that 50 varieties exist (plate of 50) because of the individual corner letters.

SG lists clear, poor, weak, and blurred impression states, and they are given SG numbers 19-22, respectively. Obviously, the stamp shown here is not a good impression. 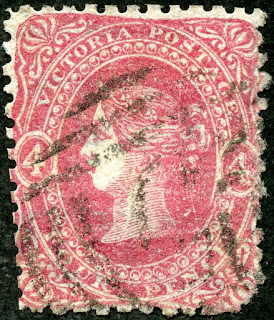 By 1860, the Victoria Post Office Stamp Printing Branch was operational under F.W. Robinson, and this typographic 4p rose was issued August 1,1860. The paper for the 3d, 4d, and 6d denominations was supplied by T.H. Saunders of London, and watermarked with the appropriate value in words.

One will notice that the perforations touch the design, and that is typical for stamps through 1870.

This unfortunate specimen looks like it may have been cut (scissored?) on the left side, and left to roll around in an envelope for years, rounding off the lower right side. 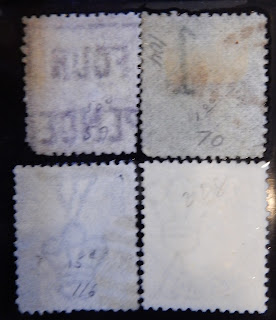 Upper left: Wmk 80 - "Value in Words" (Here "Four pence")
Upper right: Wmk 50 - "Single Lined Numeral Watermark" (Here "1")
Lower Left: Wmk 70 - "V and Crown"
Lower Right: Wmk 13 - "Crown and Double-lined A"
Evaluating and identifying  a Victoria collection requires liberal use of watermarking fluid. There are some ten illustrations of watermarks in the Scott catalogue for Victorian stamps. Here are some we will encounter. 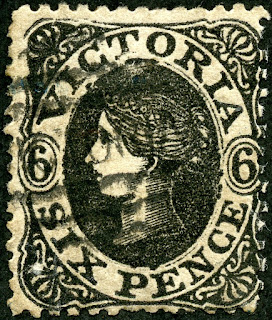 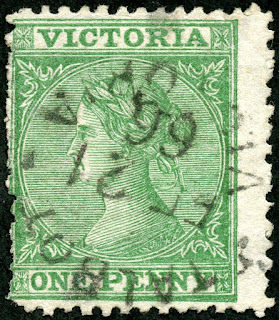 1863 Scott 74 1p green Wmk 50
One could do a whole write-up and study just on the complexities of the 1p green. As  far as I can tell, there are 15 possible watermark variations, 7 colored papers, and two suppliers in the mix. You can add numerous shades and various perforations to the equation.

And if you are a condition freak, you will have your work cut out for you. ;-) 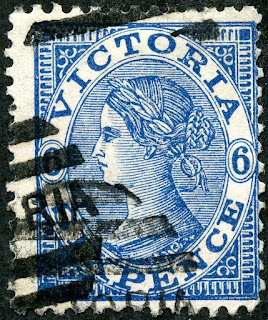 1867 Scott 116 6p blue
Wmk 70 "V and Crown"
Here is the "young" Victoria, although perhaps the bloom is off the rose.  Did she actually wear her hair like that? 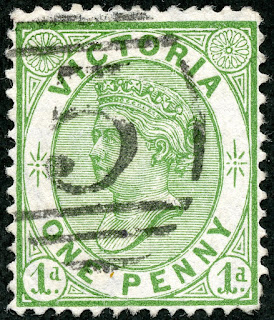 The CV is $3+. However, be on the lookout for the stamp on gray or yellow paper, which raises the CV to $110 and $30 respectively. 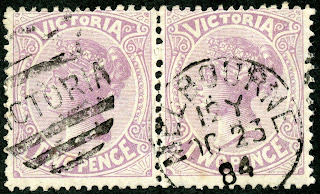 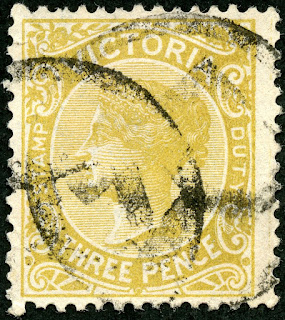 Note the condition of the stamps is getting better? Still, many examples are heavily cancelled.

(I'm not really complaining about the cancels - just noting the facts. I would rather have stamps that have really been used, albeit roughly, than "wall paper". ;-) 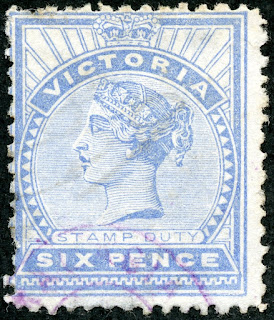 Scott places the "stamp duty" issues that primarily were used for postage during this period in the "regular" category. (We will meet the "Postal-Fiscal" stamps and category later.) 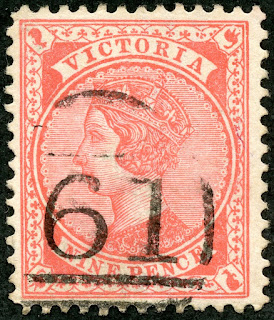 (Virtually every Victoria stamp in SG comes with a multitude of minor number shades. If one really wanted to specialize in Victoria, there are so many catalogue collectables that have been parsed, that a lifetime of effort would not be enough. !!) 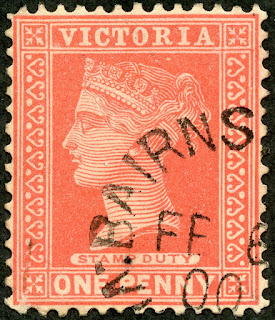 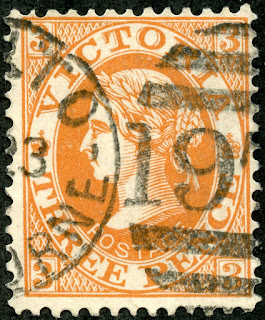 1901 Scott 198 3p brown orange
Note for this thirteen denomination 1901 issue, "stamp duty" is no longer there, having been replaced with "postage"? Fiscal stamps became invalid for postage after June 30, 1901. 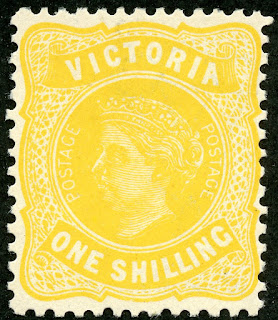 This proved to be the last general issue for Victoria, before stamps of Australia began to be used. 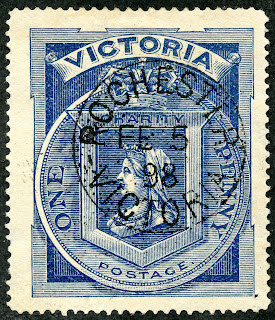 1897 Scott B1 1p deep blue
"Queen Victoria and Figure of Charity"
The British Empire is not known for their semi-postals. This stamp was sold @ 1 shilling, but only had postal validity for 1p. The profits were used for the Hospital Charity Fund. Also, the two stamp issue, produced in 1897, was intended to celebrate the Queen's Diamond Jubilee. 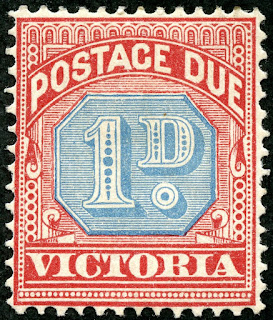 1870-83 Scott AR9 10sh brown/rose
Stamps inscribed "Stamps Statute"
(Others are inscribed "Stamp Duty")
Postal-Fiscal Stamps
The stamps that met fiscal rates, and in the larger fiscal stamp size, are separated out into the "Postal-Fiscal" section of the Scott catalogue. (Thank God!) But, the SG integrates these stamps into their main section. They all have a quite high CV.

These large size fiscal stamps were used for fiscal purposes overwhelmingly, and not for postal purposes.

So why are they in the "postal" section of the catalogue?

Yes, I know the reason, because technically they could have been for postal purposes, but the reality is otherwise.

I choose not to actively collect them, and do not count the catalogue numbers in my tally sheets. 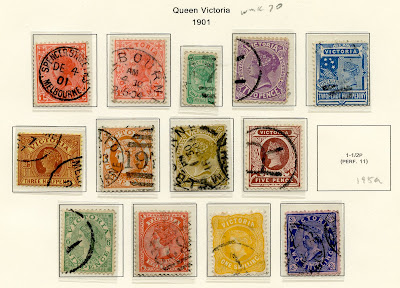 1901 Issue in Deep Blue
Deep Blue (Steiner) has 18 pages for the stamps of Victoria, and 6 more pages for the "Postal-Fiscal" stamps. All major Scott numbers have a space. The Scott oriented presentation is simplified, compared to Stanley Gibbons, but would work for those not diving deep into Victoria. 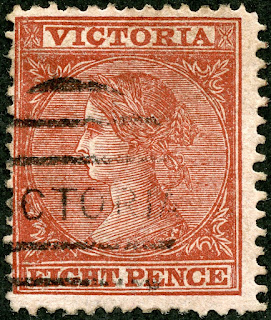 BB begins with 1856 Scott 29, and therefore ignores the very expensive 28 catalogue numbers back to 1850.

BB, as usual, telescopes the spaces, so multiple stamps (up to eight!) are often eligible. There are, not infrequently, many choices for color and watermarks for a space. It makes for a quite complex checklist, but keeps costs down, as an inexpensive stamp is eligible then for the space.

I give more detailed comments after the checklist 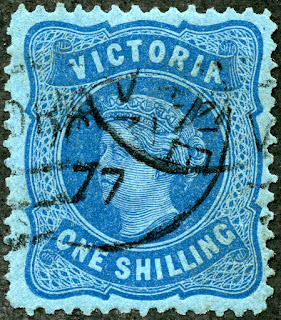 1876 Scott 138 1sh blue/blue
Out of the Blue
Well. if I had to choose ONE country that deserves specialization, and would be great fun, Victoria would be it!