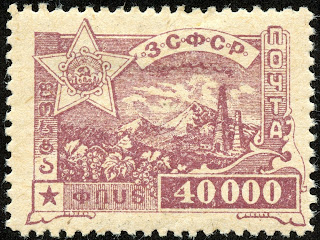 1923 Scott 14 40,000r red violet "Oil Fields"
Quick History
The Transcaucasian Socialist Federative Soviet Republic (Transcaucasian SFSR) was a constituent republic of the Soviet Union from 1922 to 1936, and consisted of Armenia, Azerbaijan, and Georgia.

The Transcaucasian SFSR became a founding member of the Soviet Union on December 30, 1922, along with the Russian SFSR, the Ukrainian SSR, and the Byelorussian SSR.

On the orders of Stalin, the Armenian/Azerbaijan/Georgia republics were joined as the Transcaucasian SFSR.

(Not all the constituent republics were happy with the change. The Georgian Bolsheviks felt it was an attempt to limit their sovereignty, and resigned in protest in October, 1922.)

Then, the Transcaucasion Federated Republics began issuing stamps on September 15, 1923, and the separate republics ceased their own issues on October 1, 1923.

It should be noted that the constituent republics (Armenia, Azerbaijan, Georgia) kept their own autonomy, even though they were joined into a Federative Union. 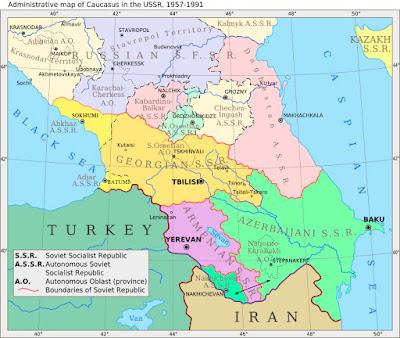 Soviet Caucasus area with Georgia, Armenia, and Azerbaijan
The Transcaucasian Federated Republics stamp issues were short-lived, as the Federation used stamps of the Soviet Union beginning in 1924. 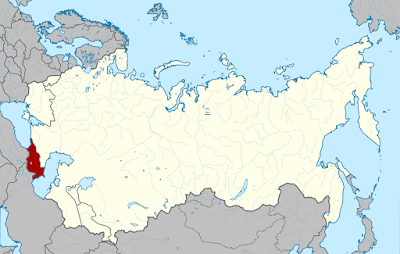 On December 3, 1936, the Transcaucasian SFSR was dissolved, and the area again reverted solely to the Georgian, Armenian, and Azerbaijani SSRs. 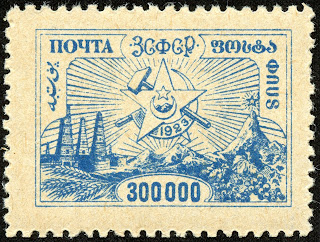 I note that "used" generally is valued a bit higher than "unused" for the modestly priced group.

The good news about the Transcaucasian SFSR 1923 pictorial stamps and issues is that there are no forgeries of the basic stamps, and no favor cancelled CTO material, according to the Russian area expert and dealer, Trevor Pateman. 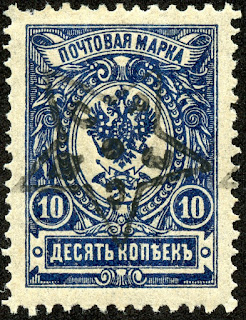 The first issue of the Transcaucasian Federated Republics consisted of eight 1909-17 Russian stamps overprinted with a five point star. They were released September 15, 1923. Inside the points of the star is a five letter acronym for the federation. CV ranges from $3-$5 for six stamps in the issue.

There was also an overprint applied to a previously handstamped issue of Armenia on five stamps. (See Scott for illustration of overprint.) These stamps are expensive (CV $35-$250), and counterfeit overprints exist according to Scott. This is really more specialty territory. 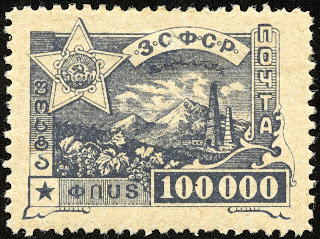 1923 Scott 16 100,000r black violet "Oil Fields"
The first issue for the Transcaucasian SFSR proper was the 1923 eight stamp perf 11 1/2 pictorial with two designs. The lower denominations had an image of an oil field and oil derricks. 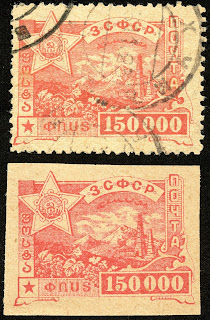 1923 Scott 17 150,000r red "Oil Fields"
Perf and Imperf Specimens
Although not issued for postal use, imperforate specimens can be found in collections. Scott puts a valuation of $14 on the imperf specimens. 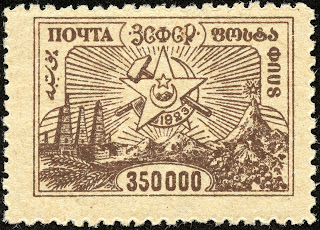 1923 Scott 20 350,000r dark brown "Soviet Symbols"
The higher denominations have an image of the hammer and sickle, symbols of the industrial worker and peasant, among other Soviet symbols. Mountains and oil derricks are in the landscape.

CV for the eight stamp issue is $3 per stamp. 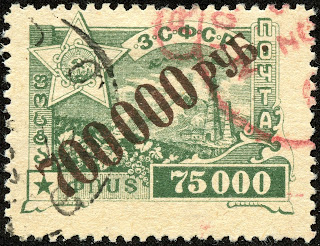 Trevor Pateman states that most of the postmarks found on these issues are from Tilfis or Baku. He suggests an interesting collection can be formed by searching for other postmark towns. Because of the outrageous inflation, a similar pictorial set of seven stamps was issued on October 24 in 1 to 18 gold kopecks.

Of interest, the images were flipped with the "Soviet Symbols" design now representing the lower denominations. 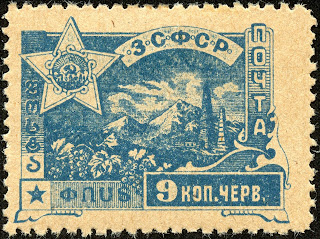 1923 Scott 30 9k deep blue "Oil Fields"
Value in Gold Kopecks
The three higher denominations have the "Oil Fields" design. CV for the stamps in the issue range from $2+-$3+. 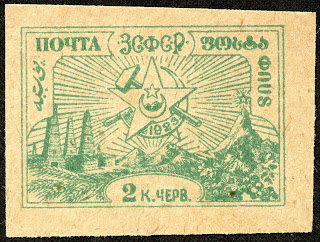 1923 Scott 26 2k blue green
Imperforate
Likewise, imperforate specimens can be found for the gold kopeck stamps, even though they were never formally issued.

So ends our brief review of the short lived Transcaucasian Federated Republics issues.

Stamps of the Soviet Union were used beginning in 1924. 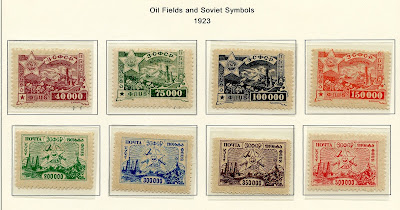 1923 "Oil Fields and Soviet Symbols" Ruble Issue
Deep Blue (Steiner) has three pages for the stamps of Transcaucasian F. R., and all the major Scott numbers have a space. 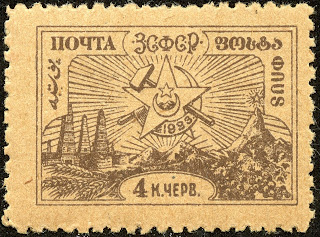 1923 Scott 28 4k gray brown "Soviet Symbols"
Value in Gold Kopecks
Big Blue
Big Blue '69, on one line of one page with Thrace, has four spaces for the Transcaucasian F. R..

Transcaucasian F. R. in Big Blue
Coverage is a low 13%. Only the first "Ruble" issue of 1923 is covered, and then just half of the issue have spaces in BB. The second "Gold Kopeck" issue is not given any spaces. I suppose we should be grateful for any coverage at all. ;-)

The 40s editions of BB have the same coverage. 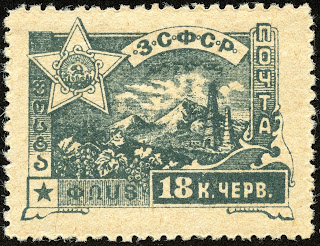 1923 Scott 31 18k slate "Oil Fields"
Value in Gold Kopecks
Out of the Blue
The more one learns about the philatelic and real history of a "country"- here, a short lived philatelic one- the more interesting these little tangible pieces of paper become.

Note: Maps appear to be in the common domain. 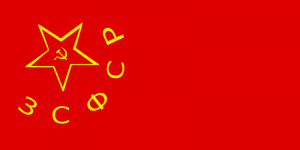 Flag of the Transcaucasian SFSR
Posted by Jim at 2:28 AM