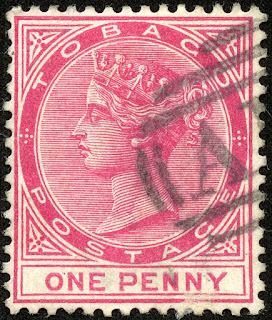 1889 Scott 17 1p rose "Victoria"
Quick History
Tobago is a small island (40 km long and 10 km wide) in the tropical West Indies just off the coast of Venezuela, and close to the sister island of Trinidad. And, yes, the name comes from the same Spanish and Arawakan root word- "tabaco"-as Tobacco. Originally, the Island Caribs inhabited the island. 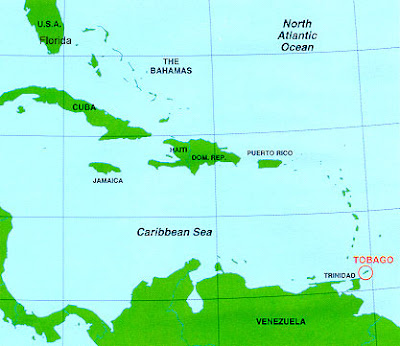 Location of Tobago
Christopher Columbus sighted the island in 1498, and subsequently the Dutch, English, Spanish, Swedish, and French fought over/occupied Tobago until the British received possession through the treaty of Paris in 1814.

When the British were there earlier (1672-74), a plantation culture was developed.  African slaves were brought in for labor, and, by 1777,  rum, cotton, indigo, and sugar were being exported.

After 1814, the sugar trade was in ascendancy.

Slavery was abolished in 1838. 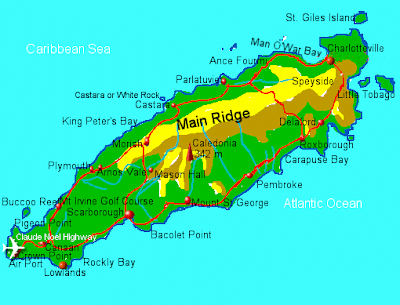 Tobago
In 1841, the British established a branch post office in Scarborough, the capital, for overseas mail.

In 1879, Fiscal stamps were introduced, and were also used provisionally for postal use.

But the sugar trade collapsed, partially because of hurricanes, but mostly because of the financial ruin of the agriculture and shipping industries. The independent colony of Tobago became subordinate to Trinidad in 1889 (Colony of Trinidad and Tobago). By 1898, the island was fiscally broke and in debt, and it became a ward of Trinidad on January 1, 1899.

By 1908, limes, cocoa and coconut were being successfully grown.

The new Trinidad and Tobago constitution of 1925 established Tobago as one of the seven constituencies.

Tobago was the location of the 1960 Walt Disney film Swiss Family Robinson.

Trinidad and Tobago became independent in 1962. In 1976, the country became a republic within the commonwealth.

These days, Trinidad and Tobago are quite wealthy (third richest country by GDP in the Americas) because of large reserves of oil and natural gas. 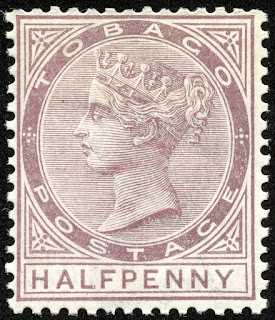 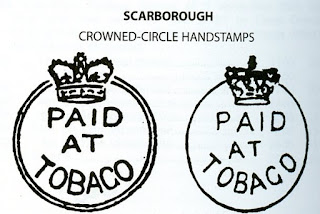 Crowned-Circle Handstamps
Prior to the introduction of stamps in 1879 for Tobago, the postal authorities in Scarborough used the illustrated handstamps for overseas mail. The Crowned-Circle handstamps were in use from 1851 (left handstamp) and 1875 (right handstamp).

True, this part of Tobago postal history is beyond the scope of most WW collectors, but it should be on interest anyway. 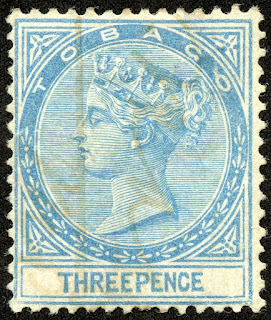 The stamps were issued for fiscal uses beginning on July 1, 1879, and then were used provisionally for postal mail beginning on August 1, 1879. In other words, this is a fiscal stamp issue that was used for both fiscal and postal purposes. There is no "POSTAGE" inscription on the stamp.

Stamps with fiscal, rather than postal markings, sell for a small fraction of the CV.

The issue that was used for postage has a Wmk 1 "Crown and C C'.- Important! Stamps of this design that have a Wmk 2 "Crown and C A" were only used for fiscal purposes, and never for postal use. 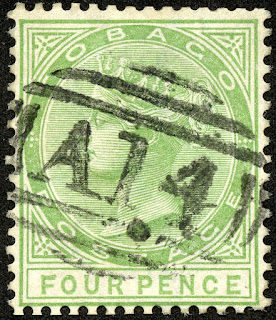 This design was used for the remainder of Tobago issues. 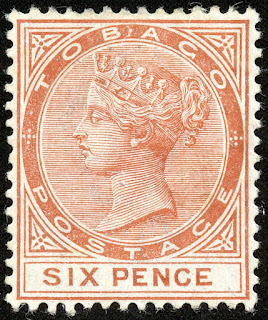 If one needs a refresher on the Wmk 1/Wmk 2 differences, see the Straits Settlements post. 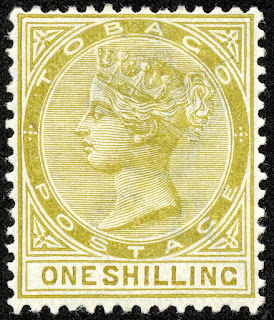 For production years 1892-1896, a "slash flaw" -a large white cut or slash visible after (to the right and above) the  "E" of "POSTAGE" in the circular value tablet, can be found. I don't have an example with my stamps, but look for it, as it increases the CV significantly. 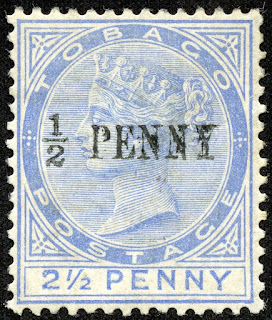 As mentioned, Tobago became a ward of Trinidad on January 1, 1899. Tobago stamps were replaced by those of Trinidad, and later (1913) Trinidad and Tobago. 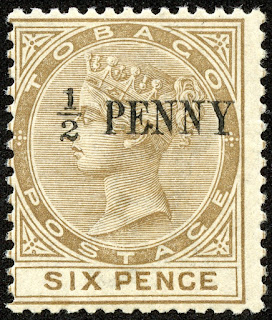 One can be forgiven if one thinks that Tobago is not represented in BB. Not only is Tobago wildly our of place alphabetically in BB, the Table of Contents in the '69 BB does not even list the country!

My 1992 four-part BB also does not list Tobago in the TOC, not surprising as the '92 edition is essentially the same as the '69 BB.

The 40s editions of BB have the same coverage, shared also on the same page as Seychelles.  But, at least, Tobago is listed under the TOC. ;-)

Tobago in Big Blue
The coverage in BB is from the relatively inexpensive 1882-96 issue. Consequently, there are no expensive ( CV $10+) stamps. 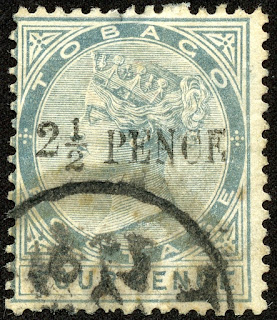 1886-92 Scott 30 2 1/2p on 4p gray
Out of the Blue
Tobago has always been a poor cousin to much more populous and comparatively wealthy Trinidad. But if slow paced and idyllic small island life is the attraction (Swiss Family Robinson), then Tobago is the one.

Note: Maps and Tobago beach scene pic appear to be in the public domain. The "Crowned-Circle handstamps" scan image was taken from the 2012 SG Commonwealth & British Empire Stamps 1840-1970 catalogue, and shown here for educational purposes. 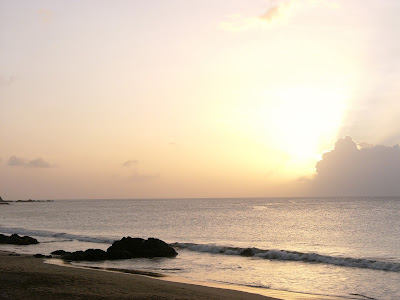