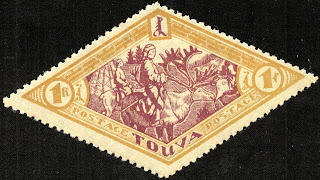 1927 Scott 28 1r yellow brown & violet
"Tuvan Riding Reindeer"
Quick History
Exotic doesn't describe the stamps of Tannu Tuva. The 1926-1936 issues are found multi-colored, with scenes such as a Tuvan impaling a bear, all on diamond, triangle, and rectangle shapes.

What schoolboy would not want these stamps? 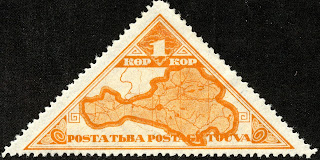 Map of Tannu Tuva
1935 Scott 54 1k yellow orange
The Bolshevik supported Tuvan People's Republic, located in southern Siberia in the Tannu-ola Mountains, forests, and steppes, on the northwestern border of Mongolia, existed between 1921-1944, when it was formally annexed into the Soviet Union. It's 1926 affirmation of independence was recognized solely by the Soviet Union and the Mongolian People's Republic. 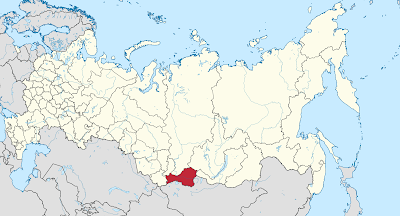 Tuvan Republic's location in Russia currently
The capital was Kyzyl, and the population in 1931 was 65,000 Tuvans and 17,000 Russians. 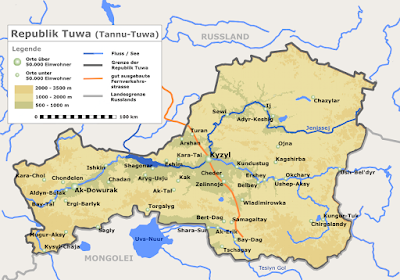 Tannu-Tuva
The issues of Tannu-Tuva were considered of dubious legitimacy by some, but there are enough (mostly philatelic) covers from Tannu-Tuva to Moscow to establish that the stamps were postally used in the mail, and all the major catalogues now list the stamps.

The reality, of course, is that almost all of the stamps were produced in Moscow, and sold directly through the philatelic trade to collectors for hard currency.

Remember, I mentioned that the issues were naturally popular with schoolboys in the 1930?

One of them was the Nobel prize winning physicist Richard Feynman, who, during the 1970s, recalling the exotic images on those stamps, took up a 10 year quest to visit Tannu Tuva (youtube video). 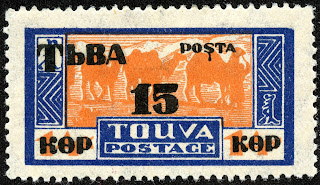 1932 Scott 34 15k on 14k, Black Surcharge
"Bactrian Camel Caravan"
Into the Deep Blue
The 2014 Scott Classic Specialized 1840-1940 catalogue has, for Tannu Tuva 1926-1943, 141 major descriptive numbers that are in the regular or air post categories. There are, in addition, some 24 bolded minor numbers that are varieties (imperforate, different perforation).

Of the major numbers, 55 are CV <$1-$1+, or 39%. The WW collector should want to have a nice representative selection from this interesting part of the world. For a few dollars more, there is even more selection available.

Most Tuvan stamps, except for the 1942 Scott 117-123 & overprints, were printed by the State Security Printers in Moscow.

There are also a group of 31 stamps- the 1938-1943 handstamped surcharged with new values stamps and locally hand printed stamps- that are quite expensive (CV $ hundreds). This is specialty territory. 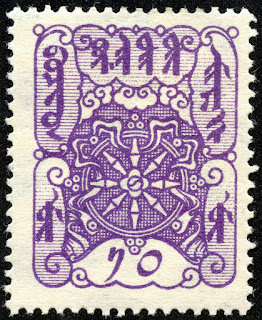 1926 Scott 5 10k violet "Wheel of Truth"
The first 1926 ten stamp issue for Tannu Tuva was lithographed, and depicts the wheel of cyclic existence, as found on the outside walls of Buddhist temples in the Indo-Tibetian geographical region.

The script is Mongolian. 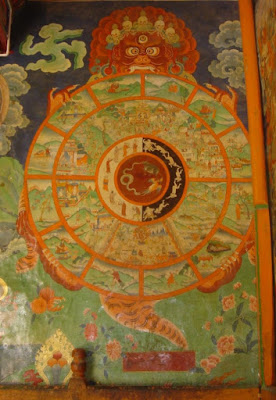 The Bhavacakra,
Sera Monastery, Tibet
The paintings of the bhavacakra, or cyclic existence, or wheel of life, represent, in part, the God realm, the Demi-god realm, the Human realm, the Animal realm, the Hungry ghost realm, and the Hell realm. 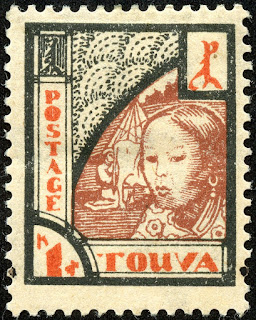 In 1927, an interesting bi-color fourteen stamp issue with multiple shapes was released. CV ranges from <$1- $6+.

Clearly, the Tuvan woman appears to be Mongolian, and indeed the Tuvan people (or Tyvans) were Mongolian. 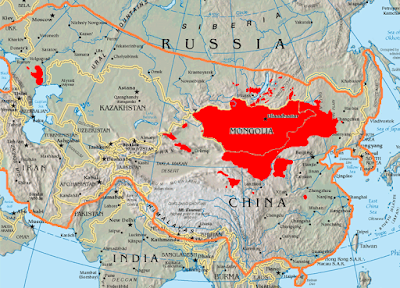 Geographic Map of Mongolic Peoples
The map shows the present extent of Mongolic peoples (red), with the outline (orange) showing the reach of the Mongol Empire. 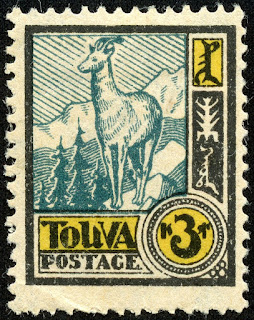 1927 Scott 17 3k black, blue green & yellow
"Mountain Goat"
Tannu Tuva has over 8,000 rivers, and the Yenisei River, the fifth longest river in the world. The eastern part has forests, and has mountains (highest: Mount Mongun-Tayga- 13,020 ft- 3,940 meters). The west is the dryer lowland steppe region. Ubsunur Hollow is a UNESCO World Heritage Site. 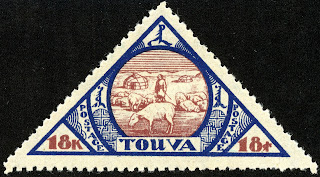 In point of fact, in 1931, 80% of Tuvans were involved in nomadic cattle breeding. The Stalin loyal Peoples Revolutionary Party and government, meanwhile, was pushing collectivisation, and trying to destroy Buddhism in Tuva. 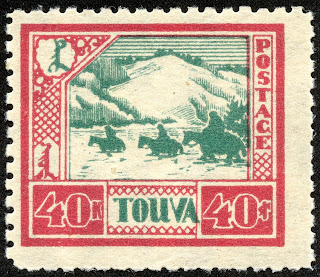 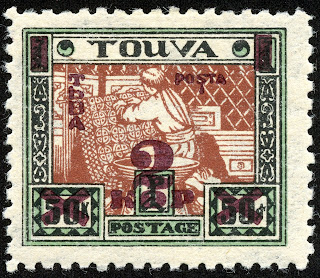 1932 Scott 30 2k on 50k black, green & red brown
Brown Surcharge; "Weaving"
In 1932, six stamps from the 1927 issue were surcharged in various colors. This surcharged issue was, apparently, to promote the Romanization of the alphabet. The surcharges were applied in Moscow. 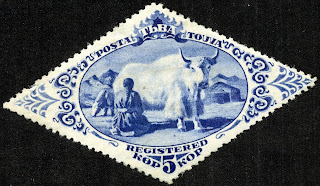 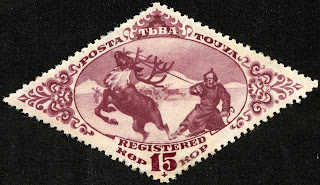 The 1934 issue is also found imperforate, with minor Scott numbers. 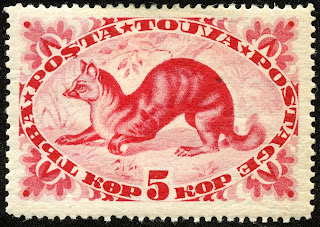 The 1935 issue, knowing a good thing, had seventeen more stamps in various shapes featuring local wildlife and scenes of the Yenisei River. CV is $1-$2+. Clearly, considering the modest cost today, the issue was well distributed to the philatelic trade.

Who is to deny, though, that the designs are attractive. ;-) 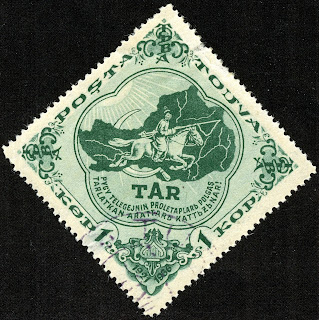 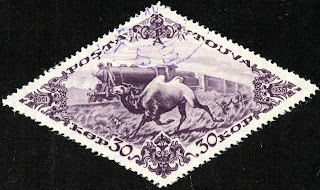 1936 Scott 83 30k plum  "Bactrian Camel & Train"
The designs, although exotic, were not entirely true to real life in Tannu Tuva. This Moscow-designed stamp shows a train: There is no railway in Tannu Tuva. 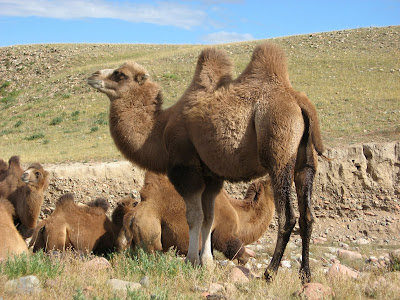 Bactrian Camels
BTW, the camels are Bactrian camels with two humps on the back, and are native to the central Asian steppes. 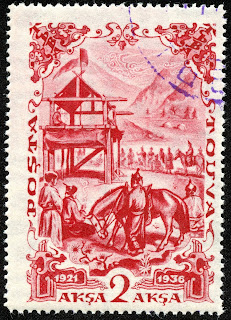 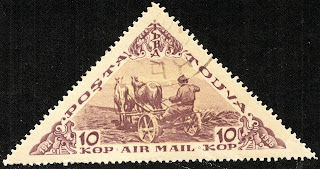 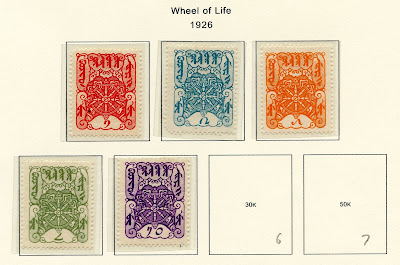 The expensive 1938-1943 handstamped numeral surcharged stamps also have spaces. These will remain empty, unless one wished to specialize in this country.;-) 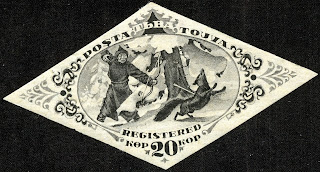 The 40s BB editions have the same coverage. 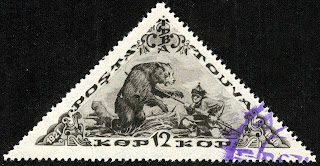 1936 Scott 79 12k black brown "Tuvan Impaling Bear"
Out of the Blue
I must have a lot of schoolboy in me.  True, as an adult, I am fully aware that Tannu Tuva issues bordered on being exploitative,  Yet I like them. ;-)

Note: Map scans and image pics appear to be in the public domain.