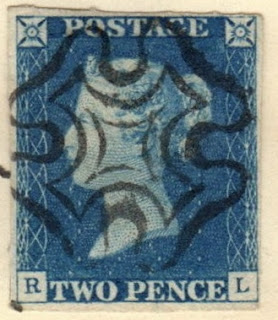 Great Britain 1840 Two Penny Blue
From Bud's Big Blue Sale
Into the Deep Blue
The reader is in for a special treat!

Bud was an earlier encourager of my fledgling stamp blog about Big Blue, and we have exchanged stamps with each other the past five years. Frankly, he has provided more for me than I have provided for him, as his collection is the more advanced. But I feel we have become good friends.

When he decided to sell an almost full Big Blue on eBay in late 2015, I asked and he graciously accepted to write a report about his experiences here.

Bud's Report  follows immediately in this section. The "Big Blue" section will list prices realized for all the country lots. In the "Out of the Blue" section, I will give some comments and opinions. 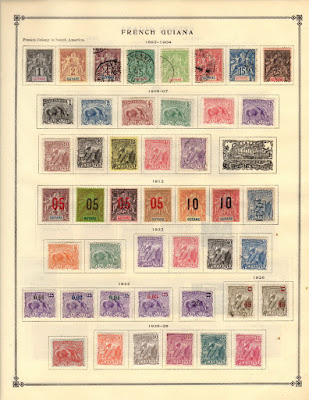 Jim's blog provides detailed and useful information for collectors trying to fill the 34,500+ spaces in Scott’s International Album, Volume 1 (aka Big Blue or simply BB). Plunging into BB is a daunting venture, but one made much more enjoyable by having at hand Jim’s insights and data.

Suppose the project succeeds, or nearly so, and BB gets filled up. What then? Give it to a grandchild? Sell it? Let it mold in the basement?
When I acquired an almost complete BB that closely matched my own, the question about what to do with a great many unwanted stamps quickly became less hypothetical. 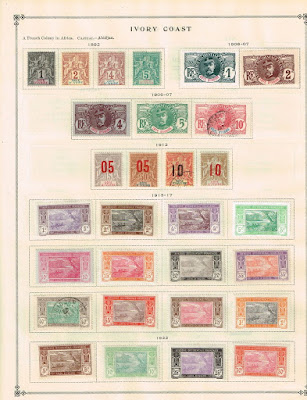 Ivory Coast
Here’s the story, a case study of how I disposed of a very big 1940s edition of BB (no USA pages, title page and publishing date missing). Stamps, some mint and some used, were neatly and accurately placed with easily peeled hinges. Almost no tuck-ins – stamps for which BB provides no spaces – were included. The album, I was told, had been assembled by several generations of collectors in a single family.

After a few stamps were transferred to my collection, the recently acquired volume remained 94 percent filled (about 32,900 stamps) with many countries complete. My grandkids are either too young or disinterested, and I’m allergic to mold. So, selling seemed the best option and, in addition, a way to recoup some of the purchase price. 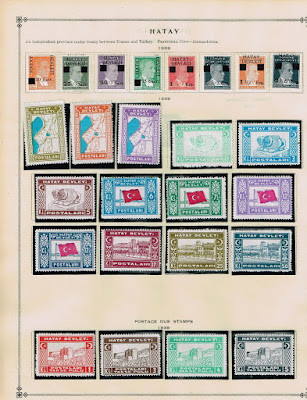 Hatay
But the decision to sell such a horde presents its own set of puzzlements. Market it on-line or at a local auction? Find a knowledgeable (and affluent) dealer? Pack it off to a stamp specialty auction house? On-line sales, being noticeably robust in the spring and summer of 2015, seemed the best option from the financial point of view. I’m too lazy, though, to hassle through selling it myself, handling the shipping and building my own nest of followers. And I want someone else to deal with cranks.

So I did a quick survey of eBay consignment sellers to learn their marketing strategies and fees. I chose eBay over other platforms (BidStart, Delcampe, Stamps2Go) because the latter serve principally collector/sellers who offer individual stamps. Craig’s List, another option, is at once too local and too generalized. EBay moves items faster and has greater access to customers than the others do. 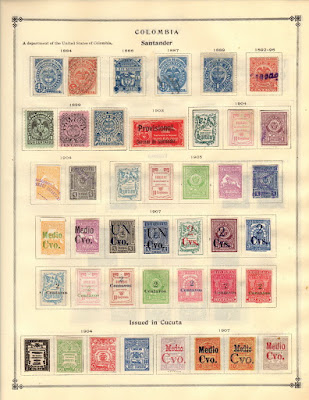 Colombian States
Three consignment sellers, all well-established on eBay with 100 percent positive feedback ratings, offered three different marketing strategies and commission rates. Their percentage includes eBay fees as well as handling and shipping costs. All three provide excellent pics, too, a highly important consideration. Given the extensive service such sellers provide, their rates seem reasonable. The three options I chose from are:

1) Sell the whole collection at one time, one listing, at 18.5 percent commission. This option would quickly return proceeds, but wouldn’t allow extended promotion of sales. Moreover, most collectors might be less interested in buying so many stamps at one time.

2) Break the collection into country groups, as nearly as possible given that BB sometimes overlaps countries on the same pages, to be sold over several months, at 25 percent commission. Proceeds would come more slowly, but the total would likely be greater than Option 1. Promotion on various web sites and blogs would be possible.

3) Break the collection into sets and better individual stamps, the remaining less valuable stamps being marketed by pages, sold over the better part of a year, at 40 percent commission. Proceeds would come more slowly, but possibly in greater amounts than for Options 1 and 2. Collectors would be better able to pick and choose, making their bidding more aggressive. Internet promotion beyond eBay could be maximized. 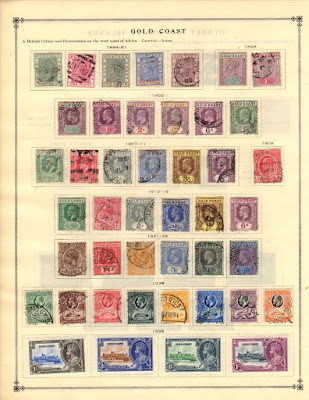 Gold Coast
I chose Option 2, offered by a seller (ebay id: kenr2) with a great deal of experience and a sizeable bevy of followers. He broke the BB into 269 lots and, from September to December 2015, sold 15 or 20 lots each week. Payments came to me every week, two weeks after the sales closed.

From the outset, the large number of “watchers” on eBay portended a good result. The final total was $34,744.73, a little over $1.07 per stamp. Half of the total was paid by a single enthusiastic bidder. (I hope he, or the one he served as purchasing agent, enjoys his new collection.) 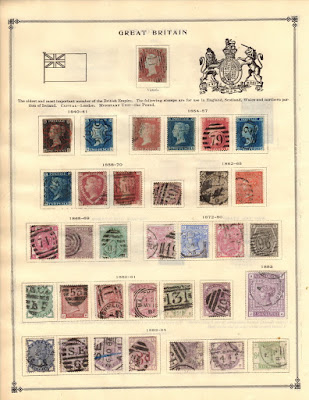 Great Britain
The most expensive lot ($1213.73) was Great Britain. It included a fine Scott #2 and had missing only a few of the British offices. 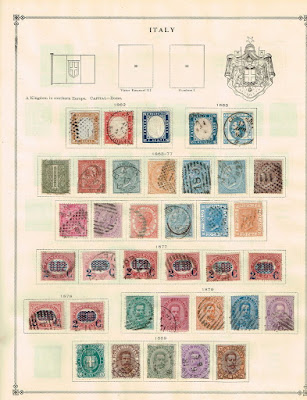 Italy
Italy was strong at $1177.68, including BOB, Italian offices, and Aegean Islands. 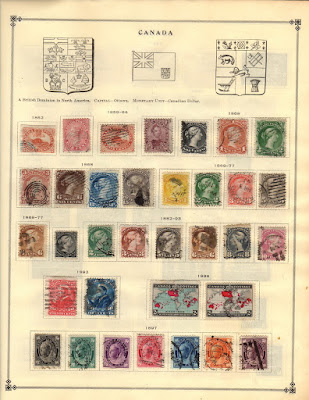 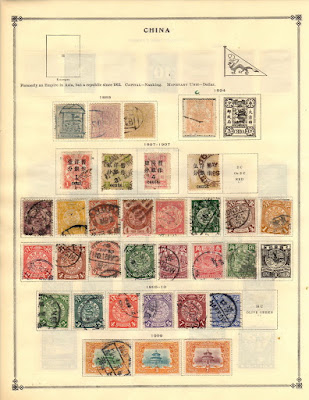 China
Competition was strong for all Asian countries, with China (significant gaps) realizing $649.33 and the Philippines (nearly complete) at $714.00. 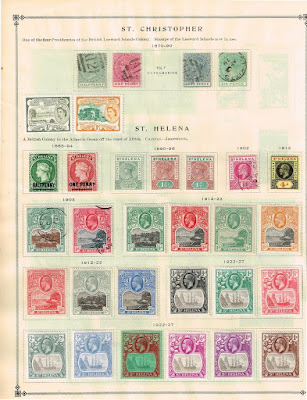 Countries with all spaces filled sold at a premium.  (See full listing below in the “Big Blue section). 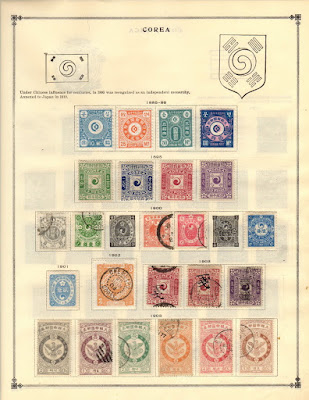 Korea
Korea provided an illustration of why it’s wise to retain an experienced seller. Initially the lot, a single page with some stamps missing, sold for a startling $1100. The high bidder then reported that it was all a mistake, a prank played on him by co-workers, he thought, when he left his computer unattended. When the seller relisted, it sold for $355.00, more in line with expectations.

Another kerfuffle arose when a bidder claimed he had accidentally bid too much on a lot and asked (demanded, even) the seller to reduce his cost by half. The seller relisted, blocked the malcontent from all further bidding, and laughed as the second sale price zoomed past the first.

The seller declined to offer Cuba, given eBay and PayPal prohibitions. PayPal recently was fined stiffly for Cuban transactions (not stamps).

The only other hiccup was eBay’s fault entirely. A few minutes before one week’s lots were ending, eBay’s system crashed, which means that those lots did not benefit from the final kick of snipe bidding. EBay apologized, but probably something over $1000 was lost.

Will this result be duplicated when the next nearly full BB sells? Possibly, but mine definitely benefited from the enthusiasms of one very aggressive bidder. May his tribe increase!* 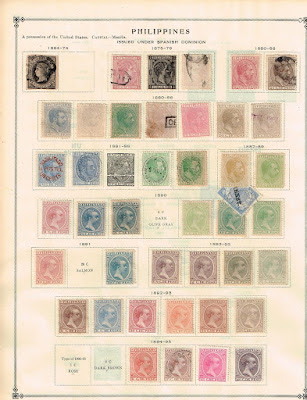 Results for the 269 BB lots

(Apologies to those who are bothered by wavy columns ;-) 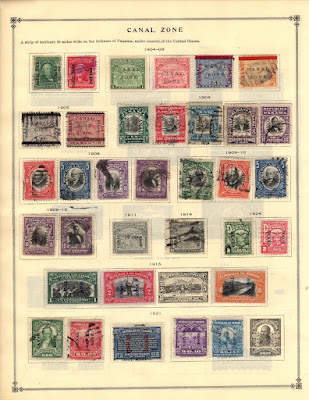 Canal Zone
Out of the Blue
Thanks Bud- absolutely wonderful report!

Bud had the good fortune to purchase an almost completely filled Big Blue.  He removed some stamps for his own collection, and then sold the 94% Big Blue (~32,900 stamps) on eBay through a hosting dealer.

As noted, he achieved a $34,000 gross yield by selling the album by country.

That $34,000 figure puts his BB virtually at the top of recent sales.

Bud’s collection is more comprehensive than mine, so I was quite interested in bidding on these BB country lots. Consequently, I followed every lot, and bid on some of them.

Here are my observations and opinions about the sale.....

* Bud’s  BB country lots on eBay were wildly popular, and he received many bids. This certainly is good news, as it appears that WW classical era collecting is alive and well.

* The lots attracted a few bidders that bid on many of the lots- and seemed to be not afraid to bid high. In fact, my impression is some of the bids exhibited “irrational exuberance” with little regard for actual CV.  As I had put together a BB checklist- which is available here-, I generally was aware which/how many stamps in a lot had a CV over $10. And, I was aware that BB tends to provide spaces for inexpensive stamps, while not providing many spaces for more expensive stamps. But, it appears, that some bidders were unaware of this, or perhaps, that didn’t matter to them.

* One should not underestimate the psychological power on a stamp collector when viewing a full page of stamps in a BB album!
I suspect a more comprehensive album, but with more empty spaces might not have done as well.  This is a clear argument to house a WW collection in a "filled" BB album, as the financial yield, I believe, will be higher. (I may need to rethink my Steiner album approach. ;-)

* Selling by country lots is a good strategy. It permits many more bidders to get in on the action at an acceptable price for them. Selling a full BB in total would allow only the well- financed (dealers?) to purchase, and the overall price yield, in my view, would have been less. Selling individual stamps or small issue lots would have been more labor intensive, and, as BB tends to not have many stamps (1%?) above CV $35, not all that useful.

* As I have some 28,000+ stamps in my virtual BB. I couldn't bid on country lots with the same level of  vigor as someone who could use more of the stamps for their own collection.

* Because of the generally high prices the country lots were yielding, I found I bid on fewer lots than I would have preferred. But bid I did…and aggressively! With that strategy, I was successful about 1/3 of the time. 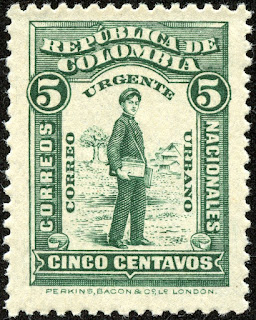 Colombia 1917 Scott E1
What about the lots I did receive?  I was very pleased with the stamps, as they were as they appeared, with very few faults.

I did pick up the 1917 Colombia Scott E1 Special Delivery stamp. It has a reputation of being difficult to acquire. There is a space for it in the BB 40s editions, but it was dropped in the '69 edition.

The "Filling Spaces" blog from (2009 post) discusses this stamp.

Congratulations to Bud on this outstanding sale!

Note: All the scan images of BB country pages were originally posted on eBay, and were part of Bud's collection that he was marketing. 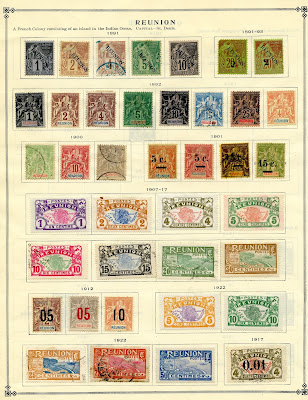