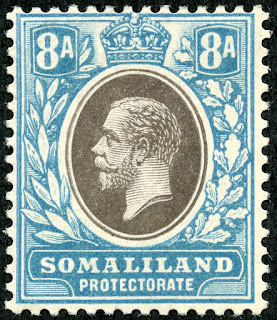 1912 Scott 58 8a light blue & black "George V"
Quick History
The Somaliland Protectorate (British Somaliland) bordered on the Gulf of Aden in eastern Africa, and for much of its existence, was surrounded by Italian Somaliland, French Somaliland, and Ethiopia.

British Somaliland
The British established a protectorate in the region after signing treaties with the local Somali Sultans, including the powerful Warsangali Sultanate, in 1884. The protectorate was administered from British India until 1898, and then the British Foreign office until 1905, when the administration was assumed by the Colonial Office.

Stamps of British India, overprinted "British Somaliland" were introduced in 1903. 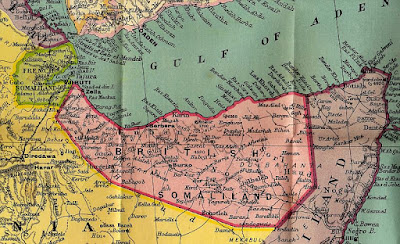 British Somaliland
Note "Taleh" (right lower quadrant), center of  the Dervish state
The British really did not have much interest in the territory, other than, by occupying the barren land, the other "Scramble for Africa" colonial powers could not. ;-) Administration did not reach beyond the coast in the early 20th century. 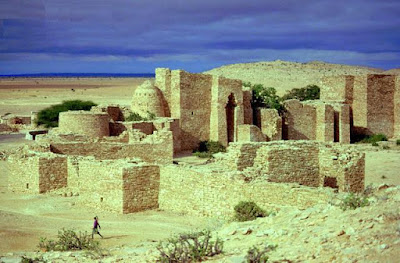 Castle Ruins at Taleh
But between 1899-1920, the British had to contend with the Somali Sunni Islamic Dervish state, centered in Taleh, who was lead by the "Mad Mullah", Muhammad Abdullah Hassan. 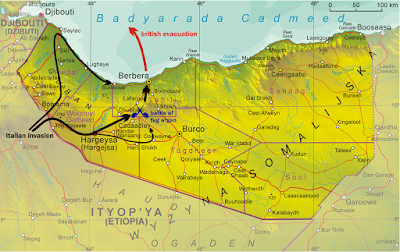 In 1960, the protectorate gained independence from Britain, and quickly united with the Italian administered Trust Territory of Somaliland (the former Italian Somaliland) to form the Somali Republic. 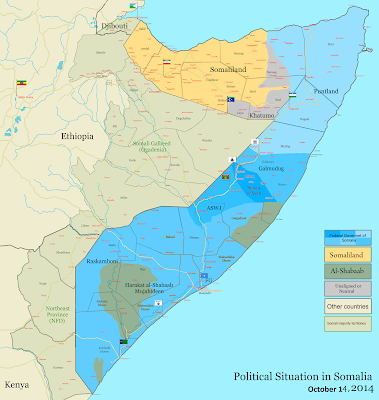 Political Situation Map of Somalia, 2014
In 1991, the Somali civil war destroyed the infrastructure, and postal services were suspended, There was no effective central government, and Somalia became a "failed state".

In 2013, International postal services began to resume with the help of the Universal Postal Union. 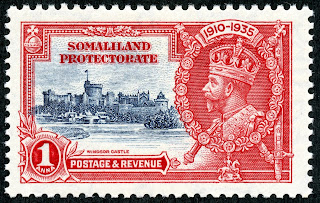 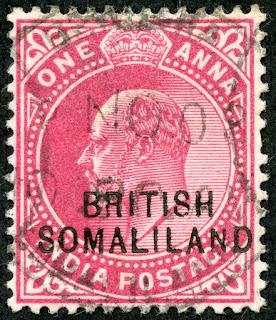 The next 1903 issue of six stamps are found on the 1902-03 British India "Edward VII" issue, and are likewise overprinted "British Somaliland". An example is illustrated above. CV ranges from <$1-$2+.

All of the 1903 issue stamps are a specialist's delight, as there were many mistakes produced on the spelling of the overprint. These misspelled overprints (minor numbers) are generally in the CV $ hundreds valuation. 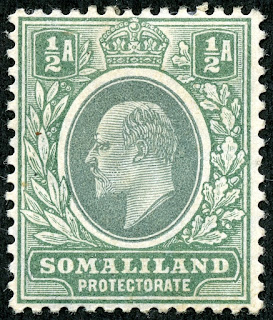 The 1905 issue is further divided into ordinary paper (major numbers) and chalky paper (minor numbers). I sometimes find it somewhat difficult to tell the difference. Chalky paper has a glazed shiny look. The problem is, if one soaks these stamps in water, they tend to lose the chalky appearance. ;-)

I should mention that, in 1909, there was a color change for the 1/2a (from dull green & green to bluish green) and the 1a (from carmine & black to carmine). 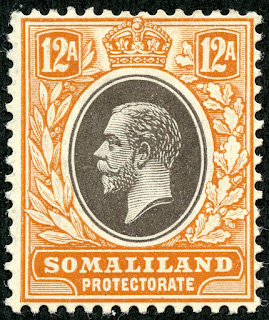 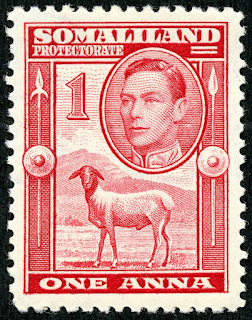 1938 Scott 85 1a carmine "Blackhead Sheep"
The British Commonwealth 1938 "George VI" issues usually offer some pictorials, and the Somaliland Protectorate is no exception.

Somali sheep (Berbera Blackhead) are native to Somalia. They are white with a black head, and are a fat-tail type. They are a hair sheep (not wool- so tolerates heat better), and they are raised for meat.

A domestic descendant of the Somali Sheep breed was developed in South Africa, and is called a Blackhead Persian. 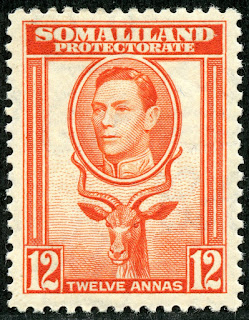 1938 Scott 91 12a orange "Greater Kudu"
The Greater Kudu is a woodland antelope found in eastern and southern Africa. 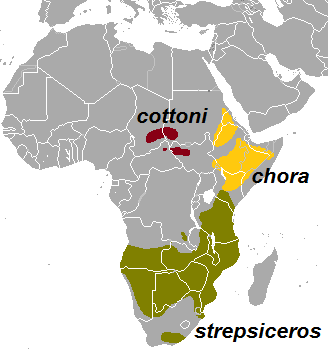 Greater Kudu Subspecies Range
The chora subspecies can be found in the western section of Somalia. 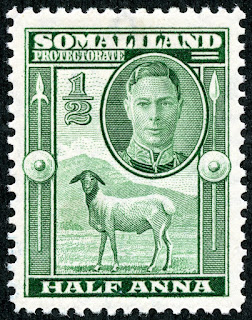 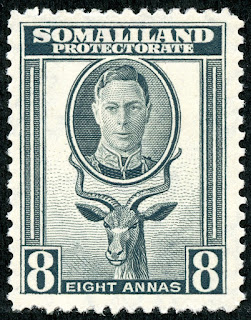 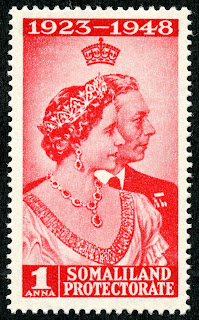 1949 Scott 110 1a scarlet
Silver Wedding Issue
I usually don't show the "Common Design Type" stamps for a British possession, as, what is the point? ;-)  But I don't believe I have scanned the 1949 "Silver Wedding Issue" stamp before, so here it is. 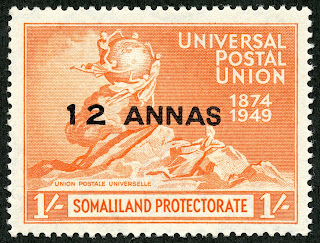 1949 Scott 115 12a on 1sh red orange
UPU Issue
Likewise, the 1949 four stamp UPU issue is a "Common Design Type". Of interest, the Somaliland Protectorate changed their currency to Cents/Shilling in 1951. However, the Cents/Shilling denomination shown for the 1949 UPU issue was too early- and therefore the stamps had to be surcharged to the then current Annas/Rupee. ;-) 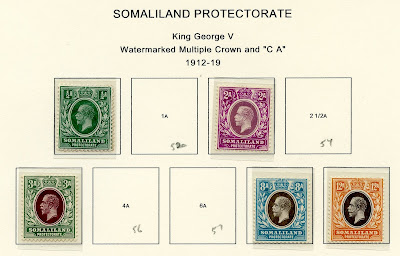 1912-19 Issue in Deep Blue
Deep Blue (Steiner) has nine pages for Somaliland Protectorate 1903-1951, and includes a space for all the major Scott numbers with one exception. The 1909 Scott 49 1/2a bluish green "Edward VII" stamp, for some reason, is not given a space. Perhaps it is a "recent" addition to the Scott catalogue, because I note that my 1947 Scott has no number "49", and has the 1/2a blue green color listed as minor number 40a. 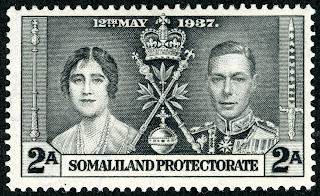 1937 Scott 82 2a black
Coronation Issue
Big Blue
Big Blue '69, on one page, has 30 spaces for the stamps of Somaliland Protectorate. The coverage is located between Shanghai and Siam (Thailand).

The coverage is the same for the 1940s BB editions, except the page is located between Siam and Sierra Leone.

There are only two spaces that require a stamp with CV $10+. 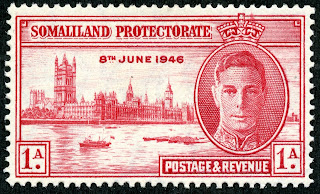 1946 Scott 108 1a carmine
Peace Issue
Out of the Blue
Somalia is a bit of a mess right now. Not all former colonial colonies or protectorates have had happy endings.

Note: Maps, and Taleh and Camel Constabulary pics appear to be in the public domain.