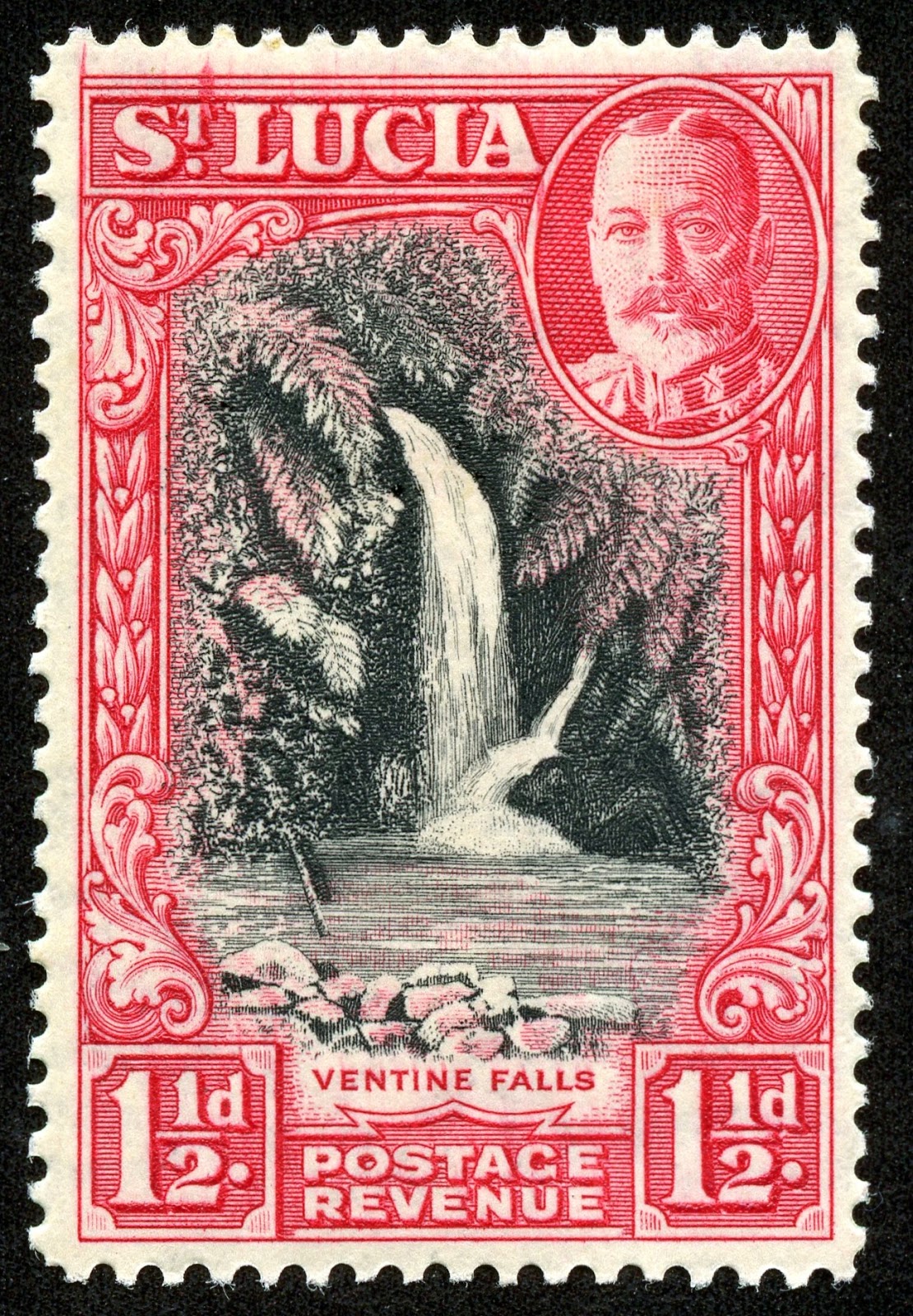 1936 Scott 97 1 1/2p carmine "Ventine Falls"
Quick History
Named after Saint Lucy of Syracuse by the French who settled there first in 1660, the 240 square mile island is one of the Windward Islands, and is northeast of Saint Vincent. 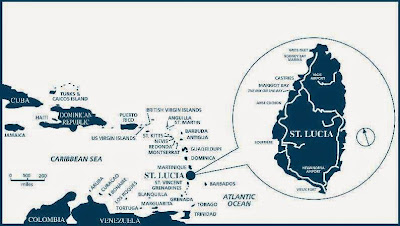 St. Lucia in the Lesser Antilles
In 1814, the British assumed control for good from the French (after much back and forth). In 1836, slavery was abolished throughout the British Empire, but left a legacy of African descent majority on the island. The original Carib Amerindian natives now comprise less than 1% of the population. 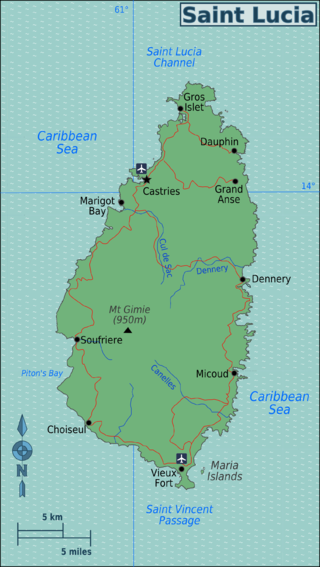 English is the official language, but Creole French (Patois) is understood by 95% of the population.

St. Lucia was a member of the West Indies Federation (1958-1962), but the Federation dissolved due to political bickering.

St. Lucia gained internal self government in 1967, and full independence in 1979.

St. Lucia remains a member of the British Commonwealth. 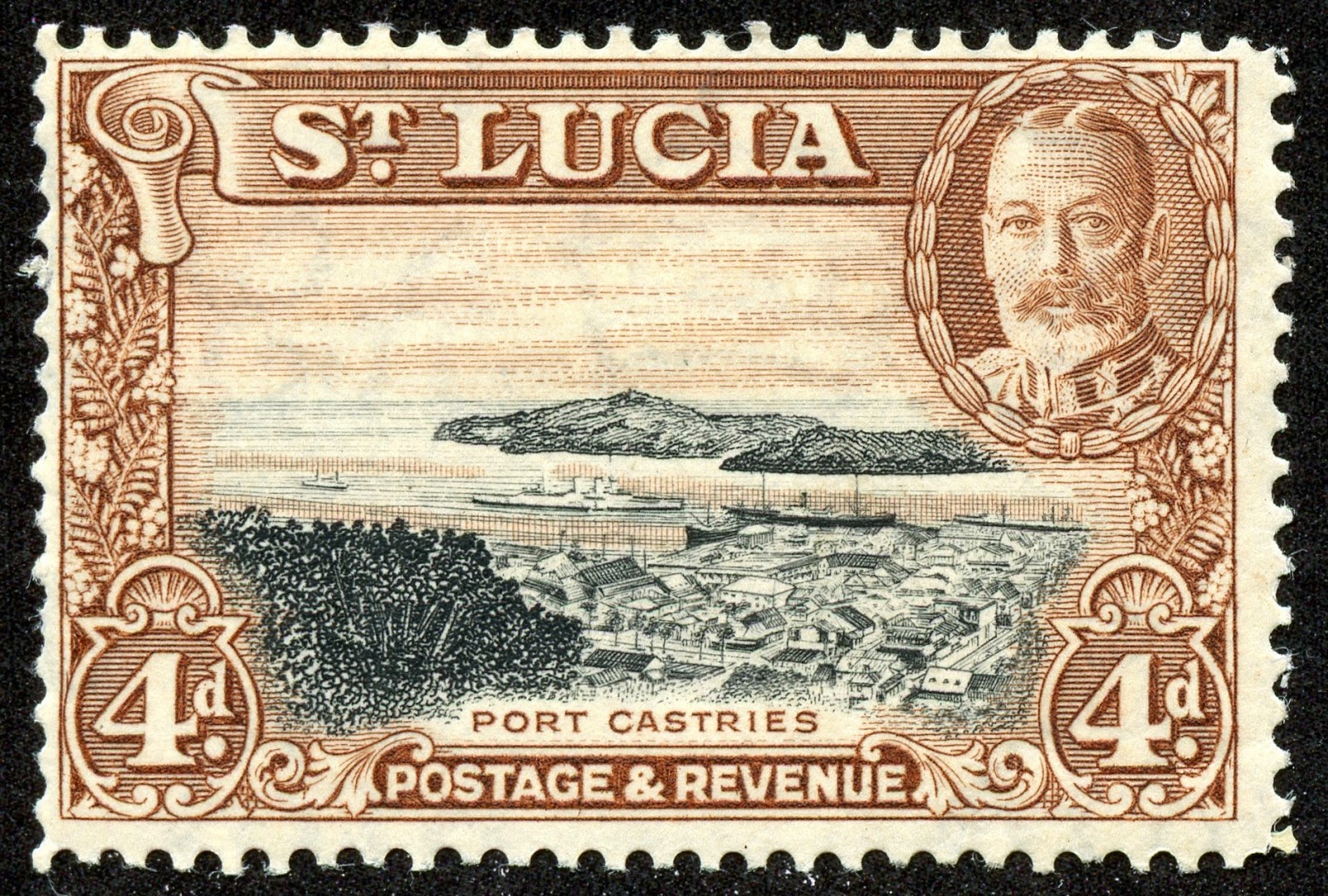 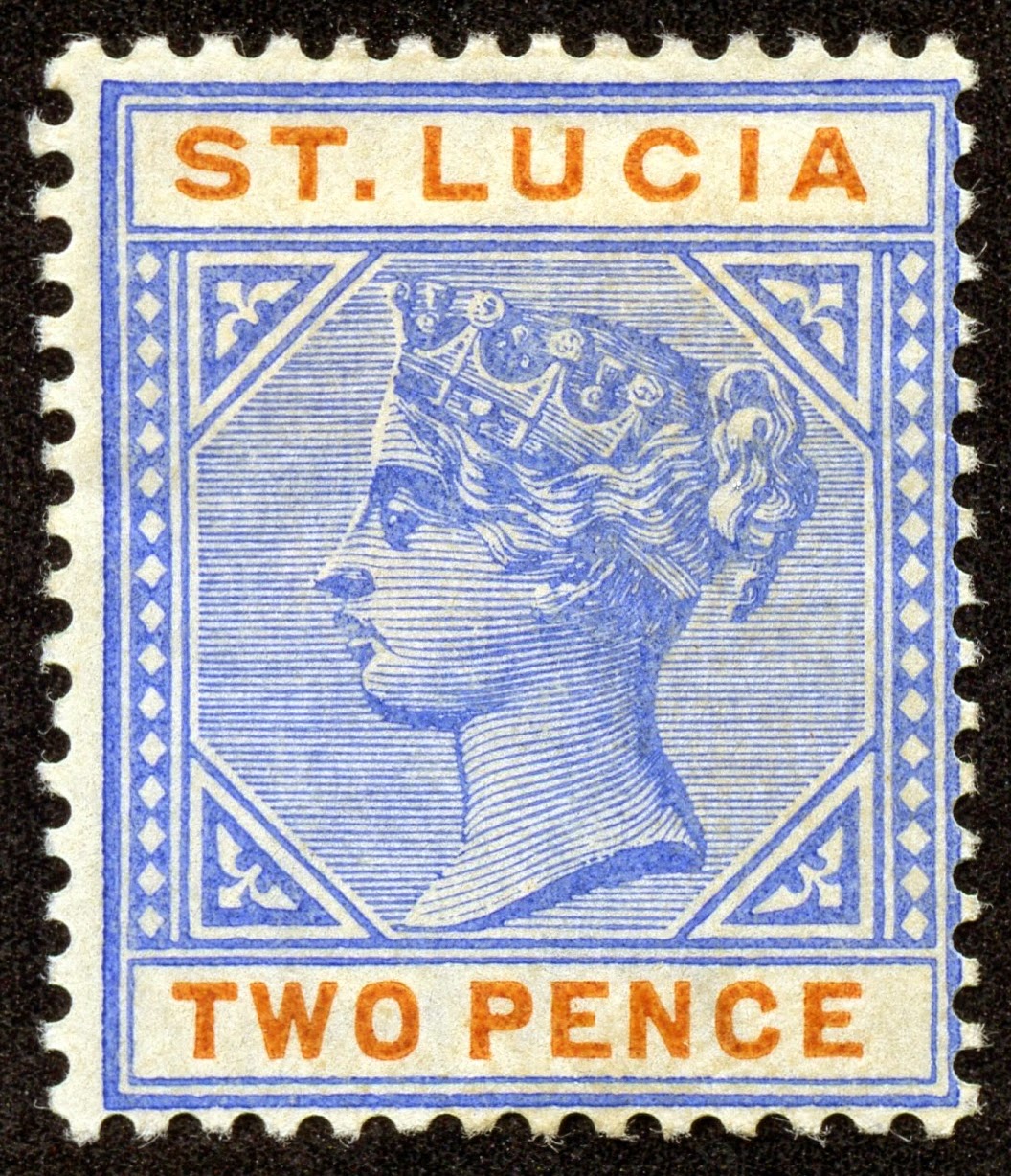 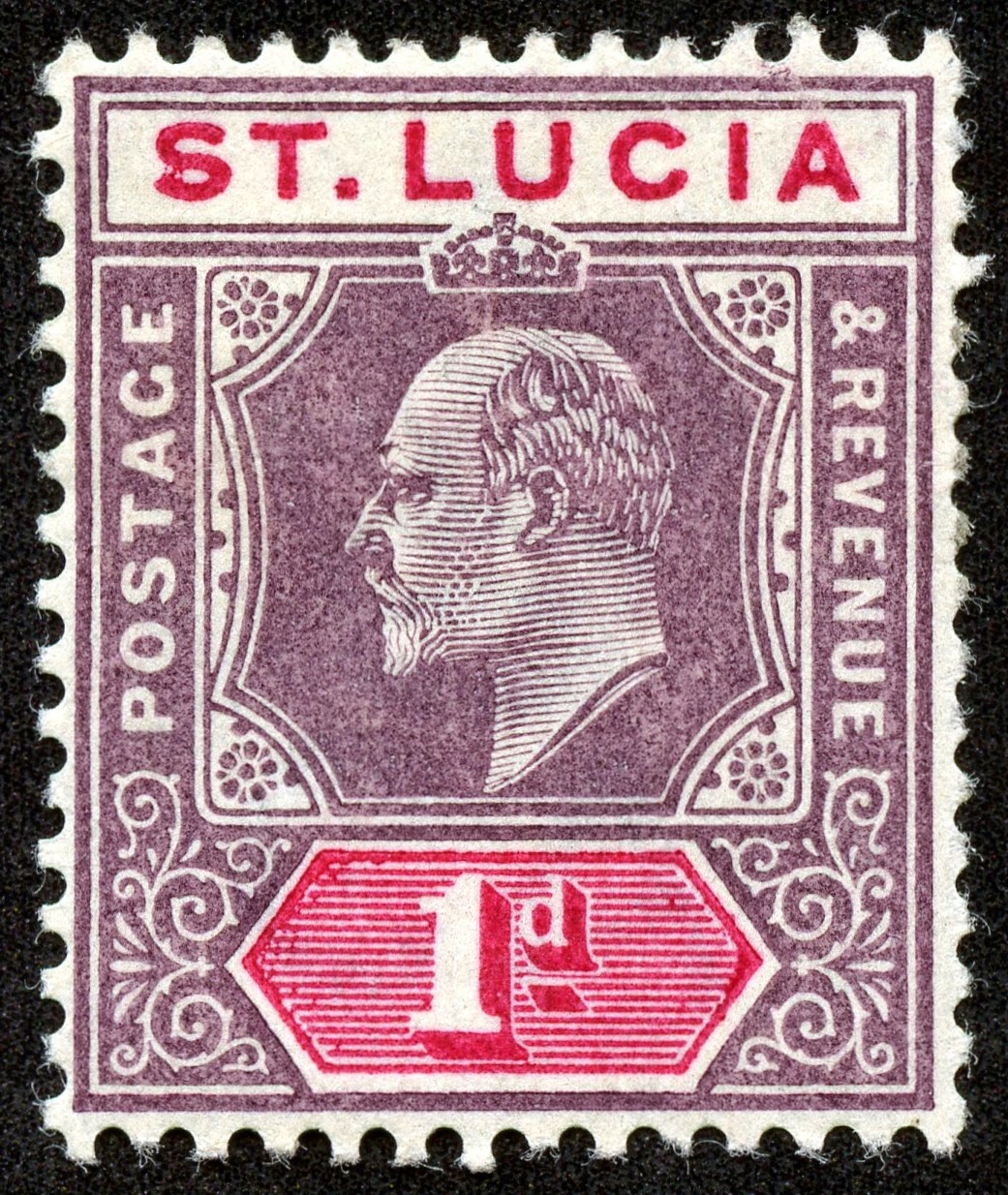 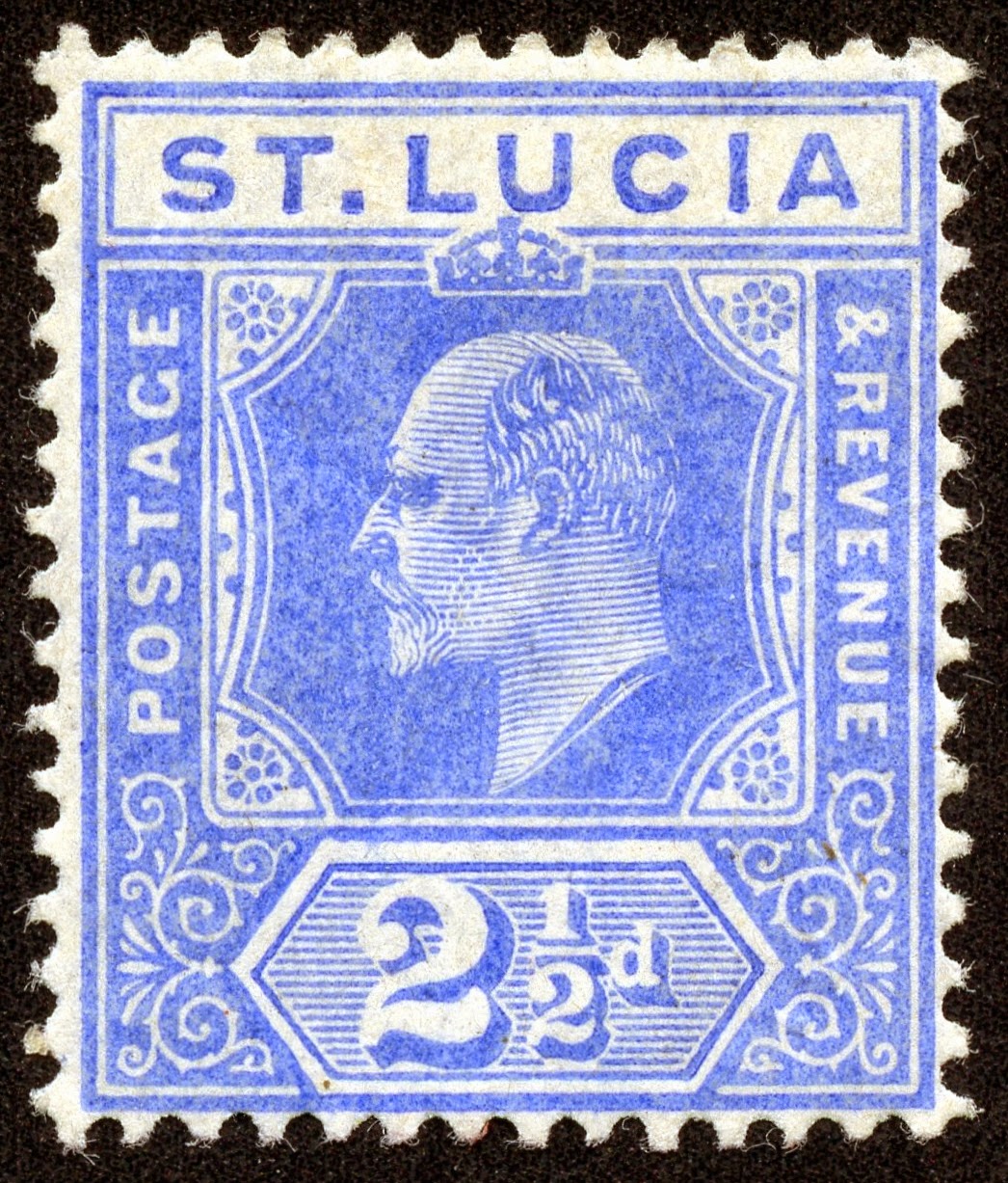 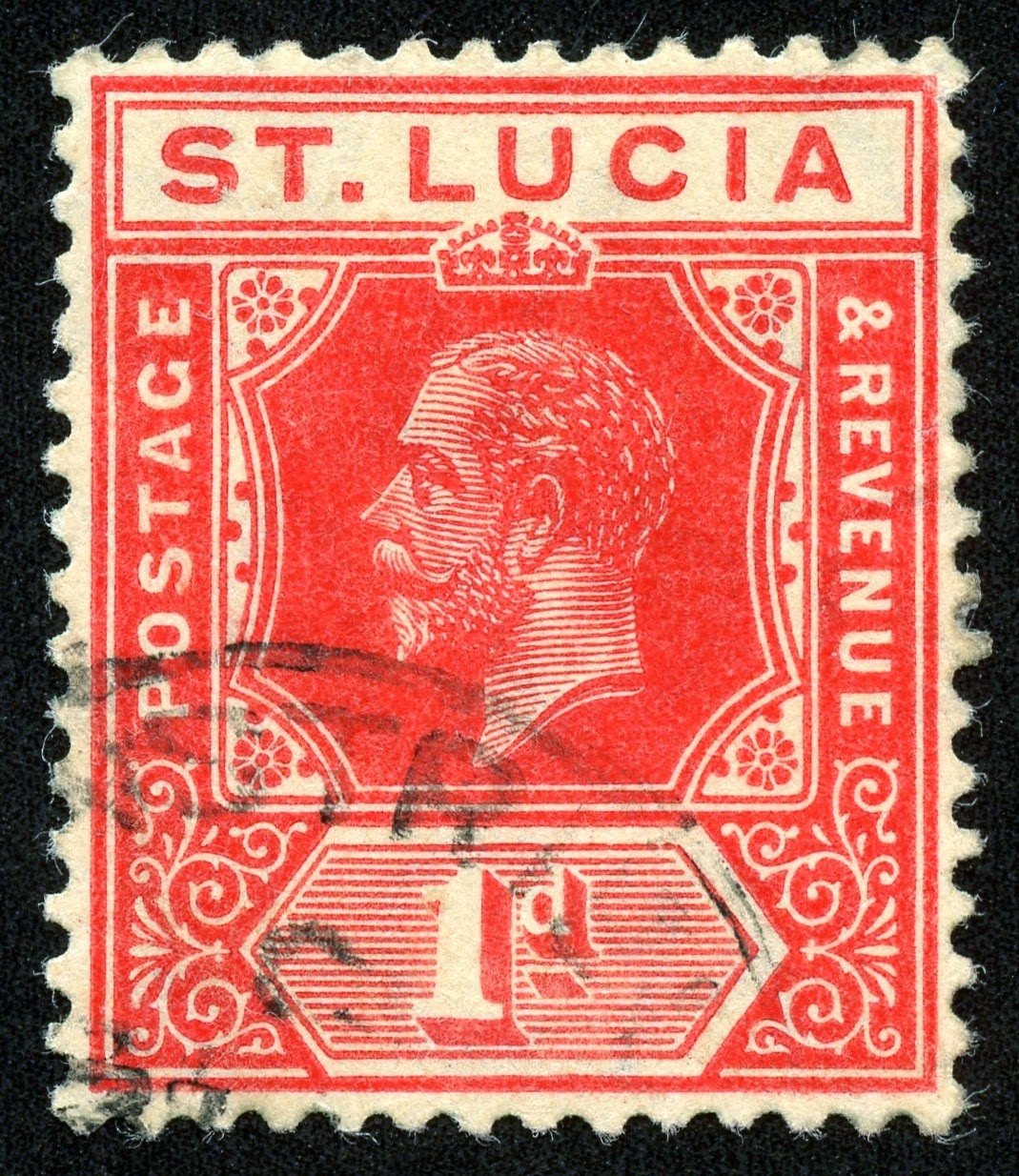 1912 Scott 65 1p scarlet "George VI": Wmk 2, Die I
A new "George V" nine stamp issue was released between 1912-19 with wmk 2. As is usual for the "Edward VII" and "George V" keyplate issues, the lower denominations are on ordinary paper, while the higher denominations are on chalky paper. This issue is Die I, where the crown sinks below the upper horizontal vignette border. (Die I/Die II differences are further explained in the Gold Coast post.) 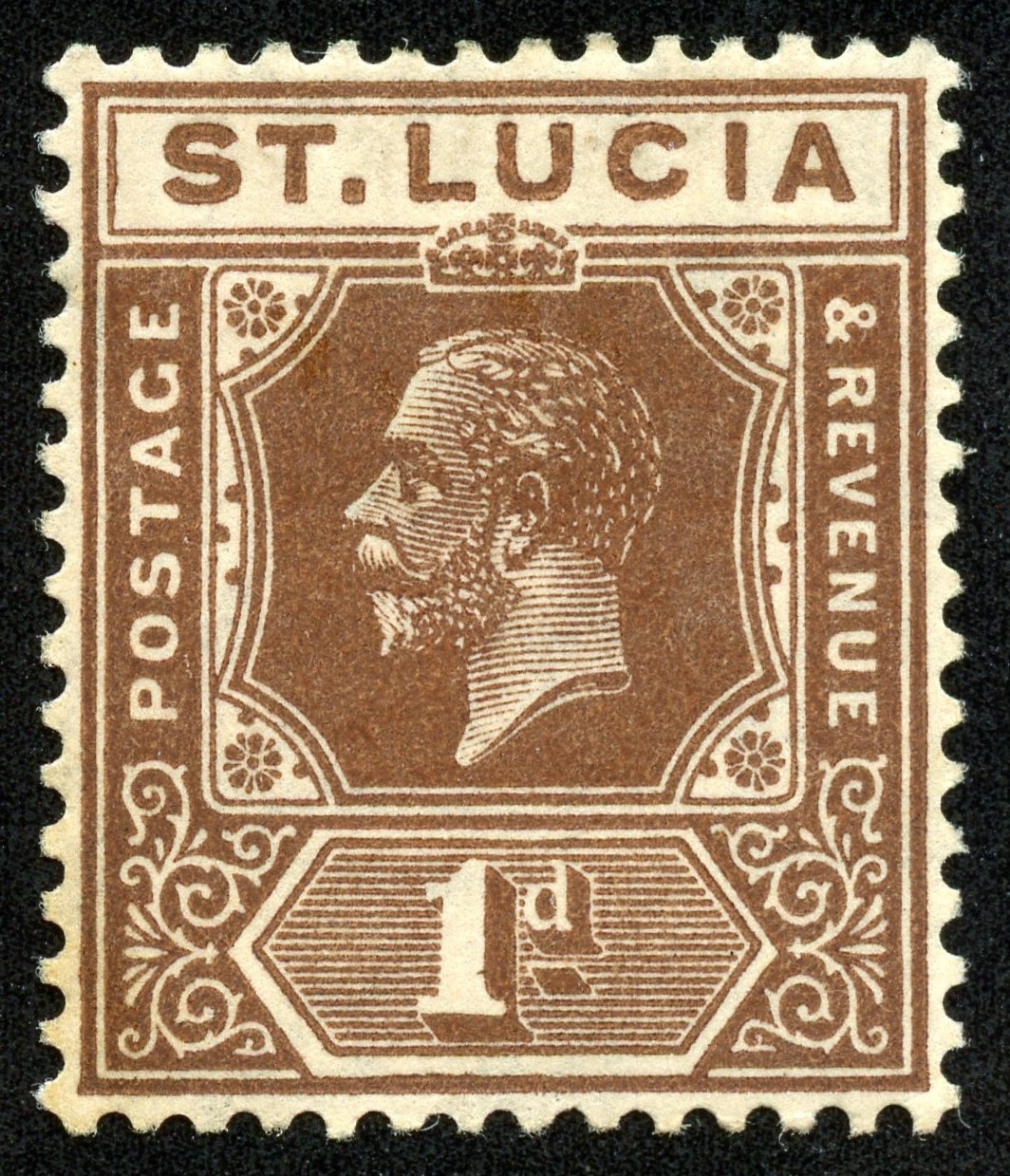 Similarly, a 14 stamp issue of "George V" was released between 1921-24 with wmk 3. Ten of the stamps have this design- Die II, where the crown does not sink into the upper horizontal vignette border. 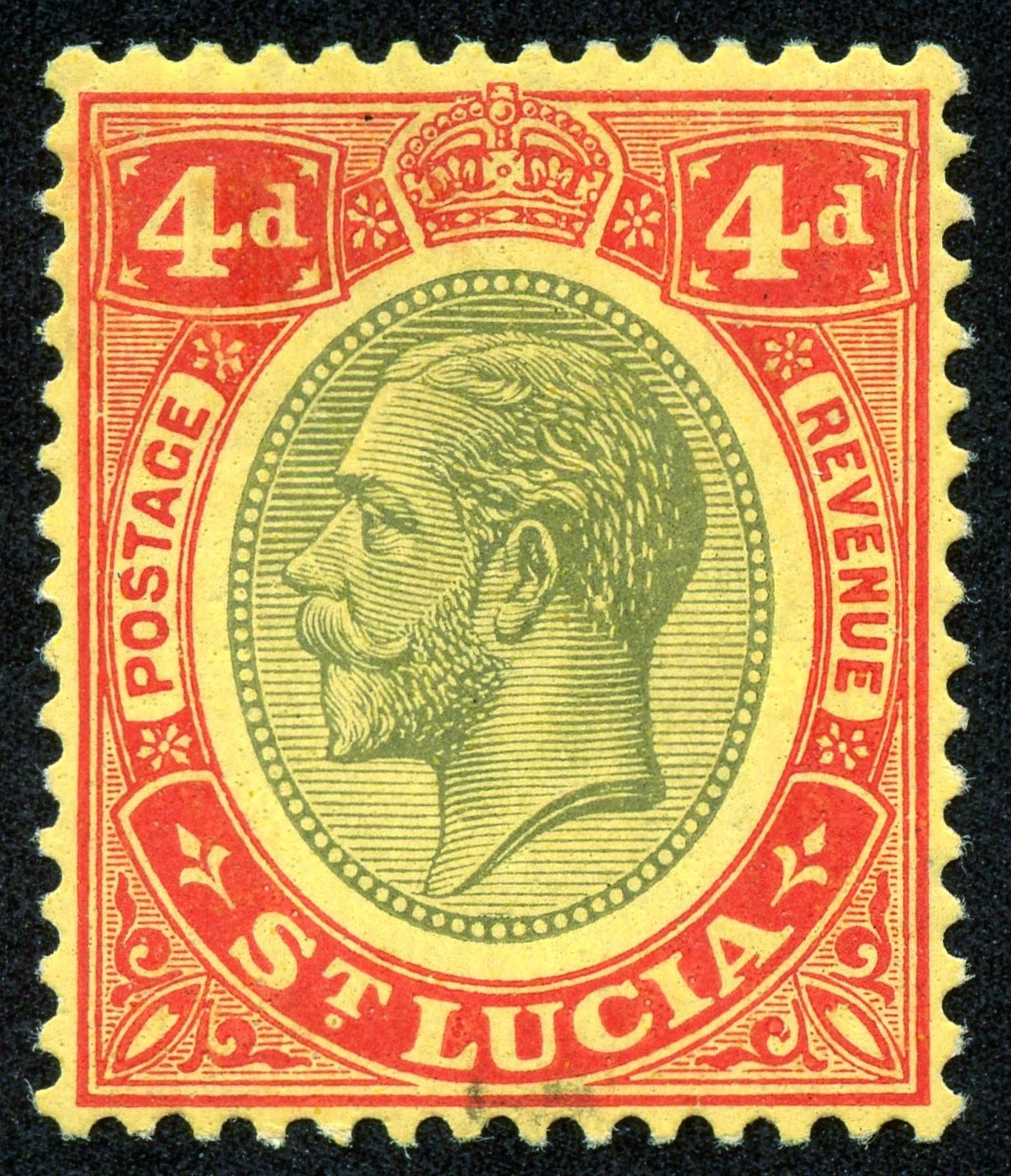 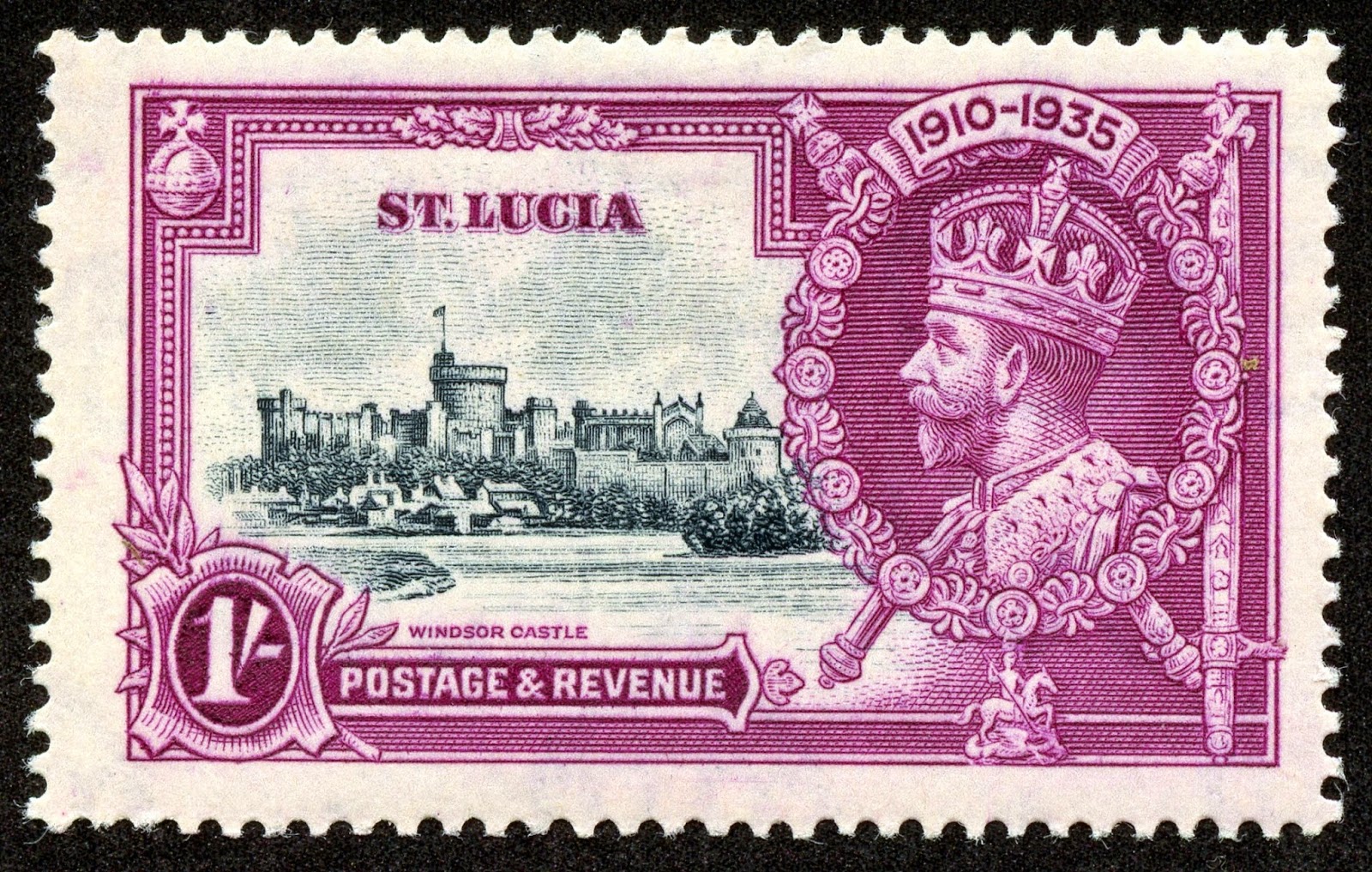 1935 Scott 94 1sh bright violet & indigo
Silver Jubilee Issue
I usually don't show common design issues for the British colonies- as I've said before, what's the point?  But the 1sh bright violet shown here is one of two stamp spaces in Big Blue that require a CV $10+ valuation, and it is a pretty stamp, so why not? ;-) 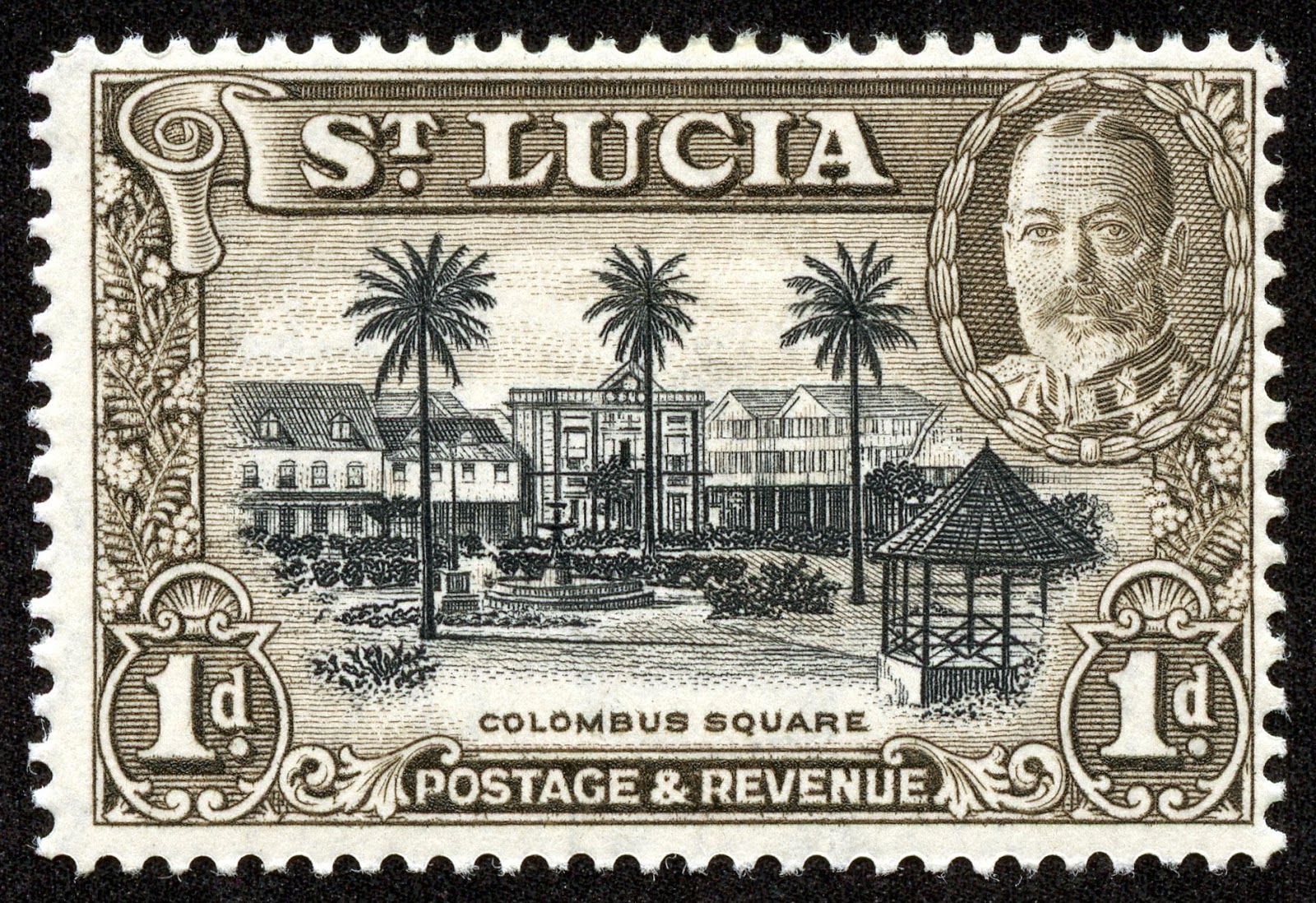 1936 Scott 96 1p dark brown
"Columbus Square, Castries"
The best issue for St. Lucia in the classical era, in my opinion, is the 1936 engraved "George V" twelve stamp pictorial definitive issue. They are nicely bi-colored, and show scenes around St. Lucia. And they are quite inexpensive: CV <$1-$1+ for nine stamps.

I've managed to scatter four examples of this issue throughout the blog post. Enjoy! 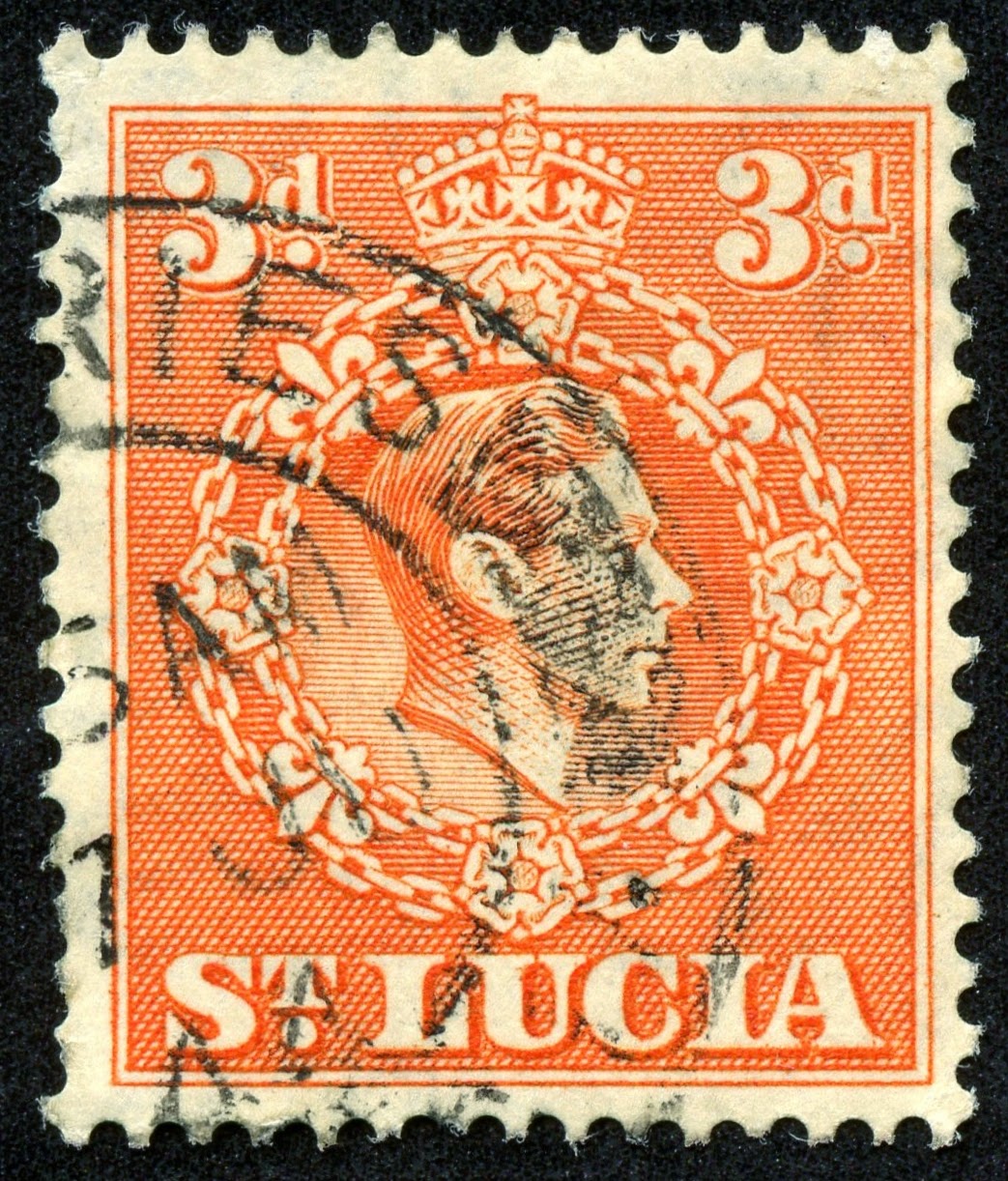 1943 Scott 117 3p red orange "George VI"
Between 1938-48, there was a seventeen stamp definitive issue, twelve of which have this design featuring "George VI". 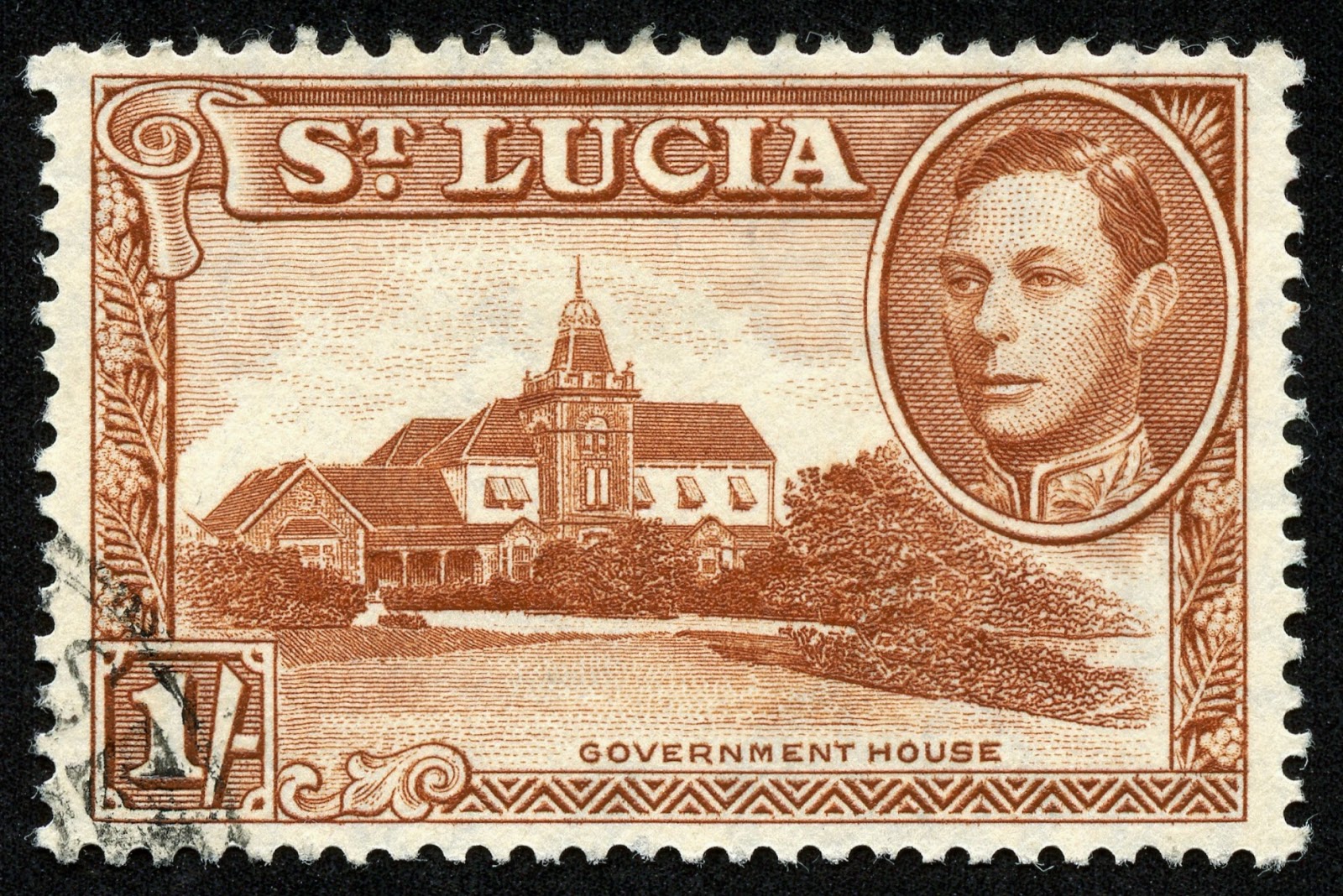 1948 Scott 121 1sh light brown
"Government House"
Four stamps of the 1938-48 issue are pictorials, two pictorials of which are "new" ("The Pitons", "Loading Bananas"). The other two pictorials repeat scenes found for the George V 1936 issue. 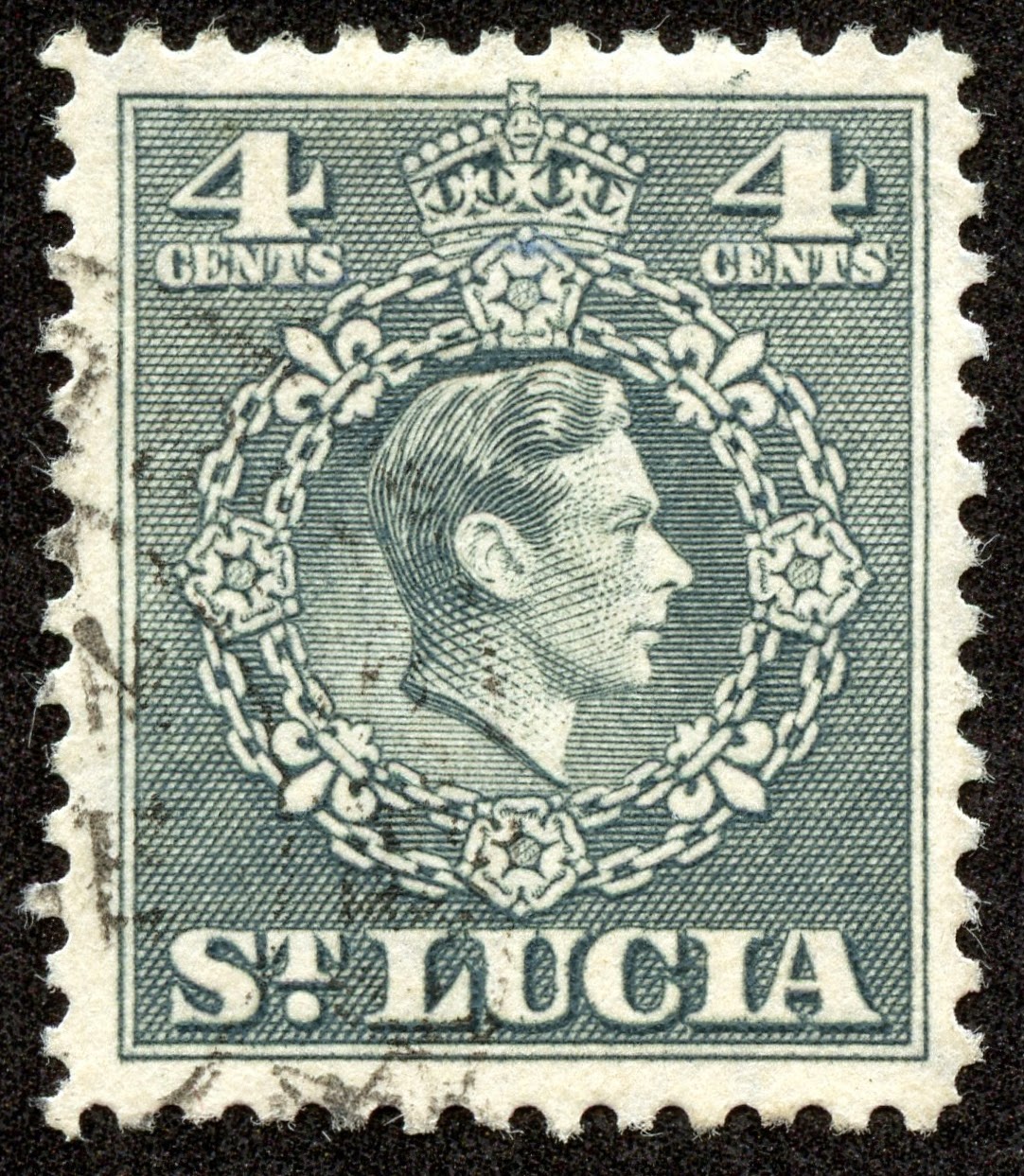 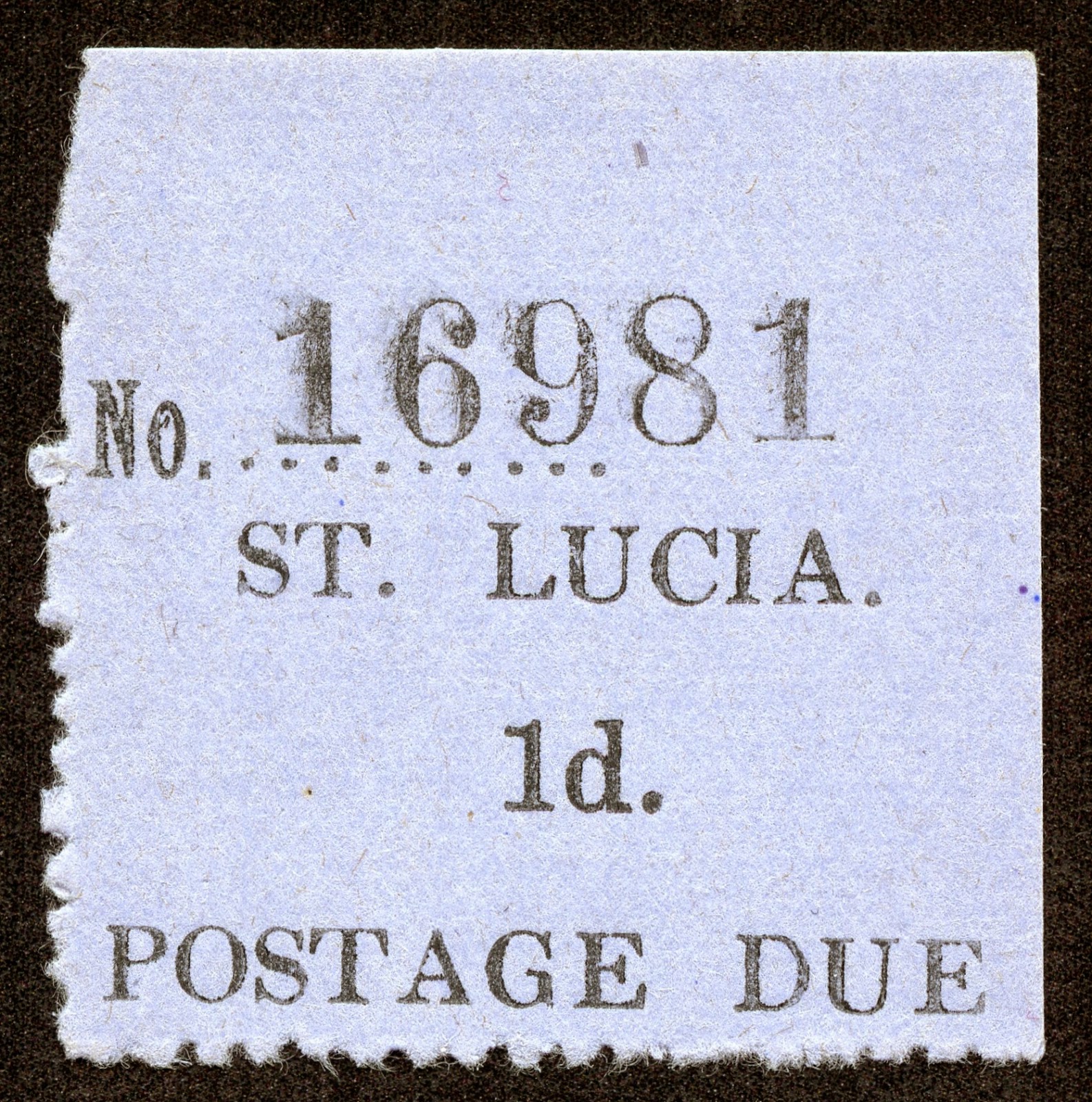 1931 Scott J1 1p black/grey blue; Typeset
One of the most primitive stamps I've seen in the classical era is the first two postage due stamps produced for St. Lucia in 1931. In fact, when I saw this specimen in one of my feeder albums, I thought it was a label or a cinderella. ;-)

The stamp is typeset, and the serial number is handstamped. The "No." script is found normal  and wide font. There are plenty of other variations as well- consult the SG 1840-1970 catalogue. 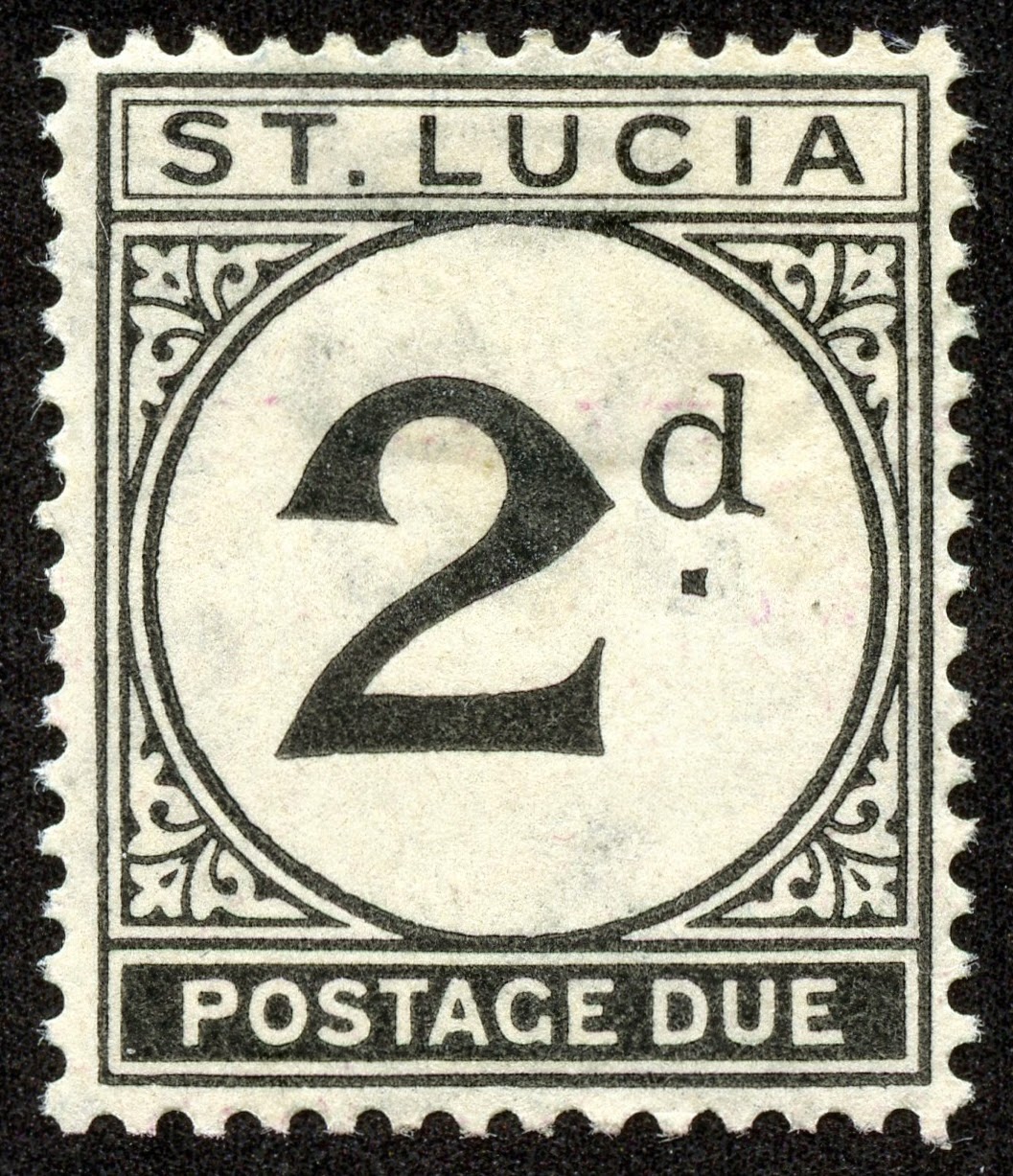 1933 Scott J4 2p black
A four stamp postage due set was produced between 1933-47 in "pence" denomination, and another four stamp set was released in 1949 in "cents" denomination. 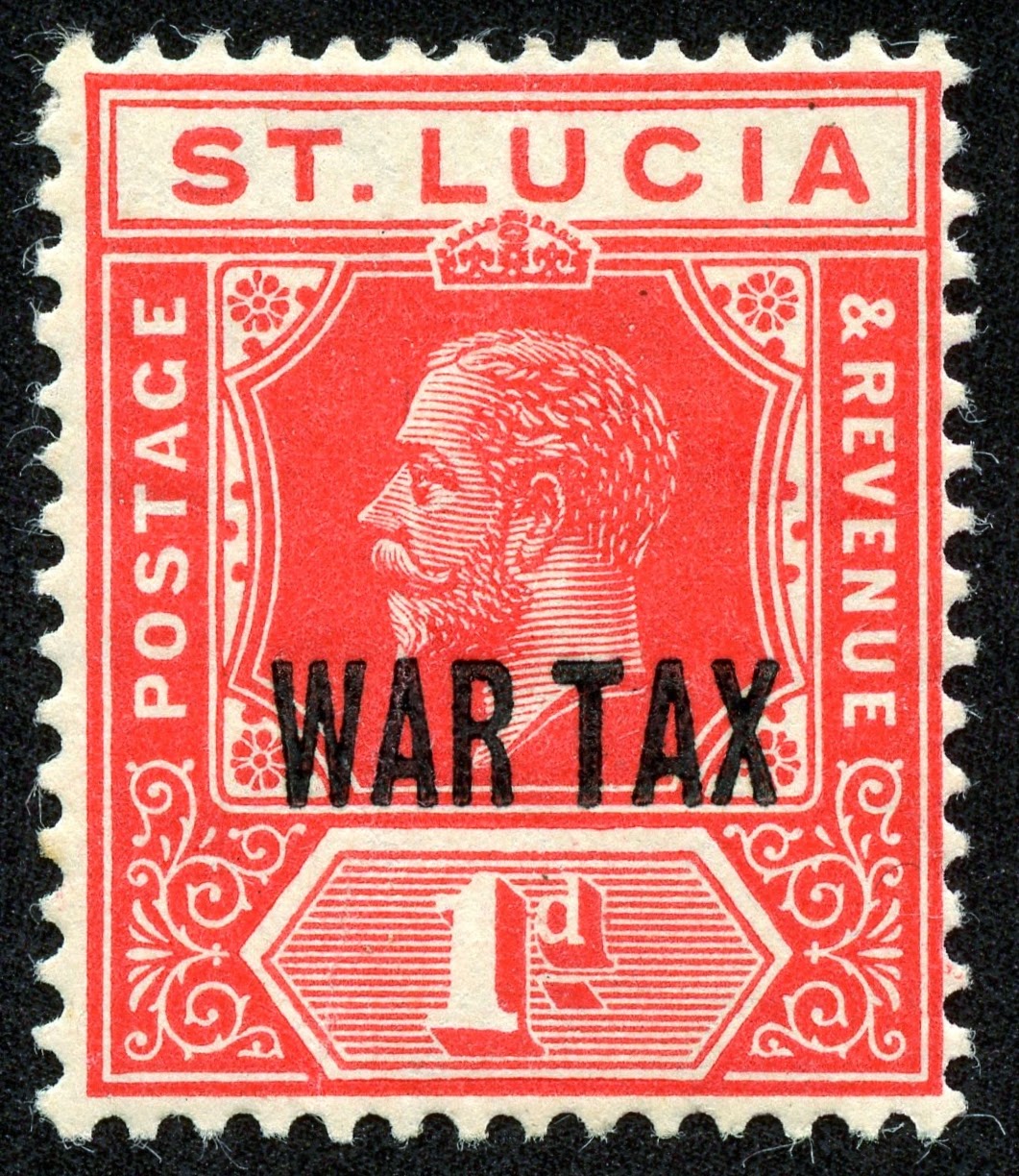 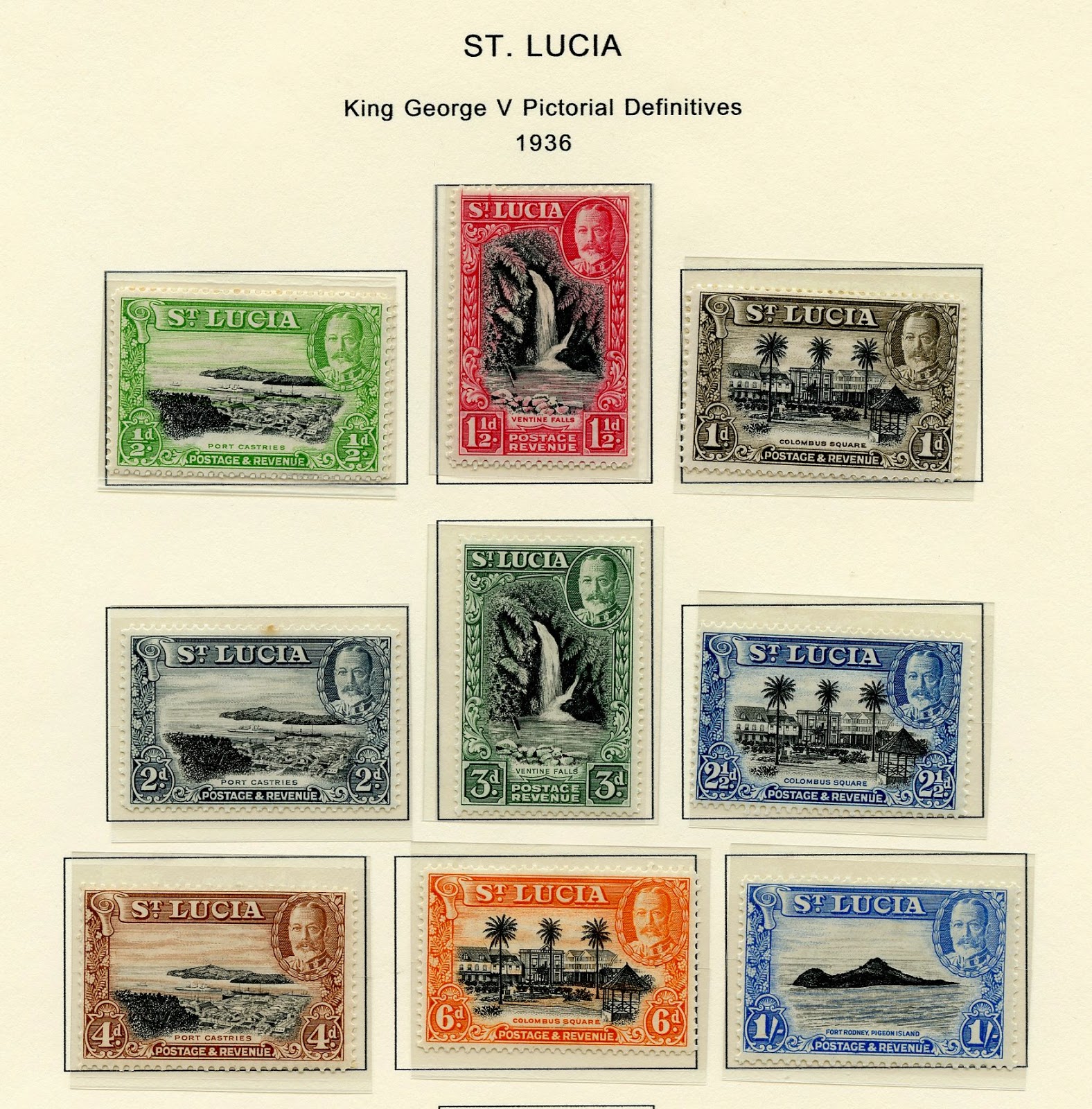 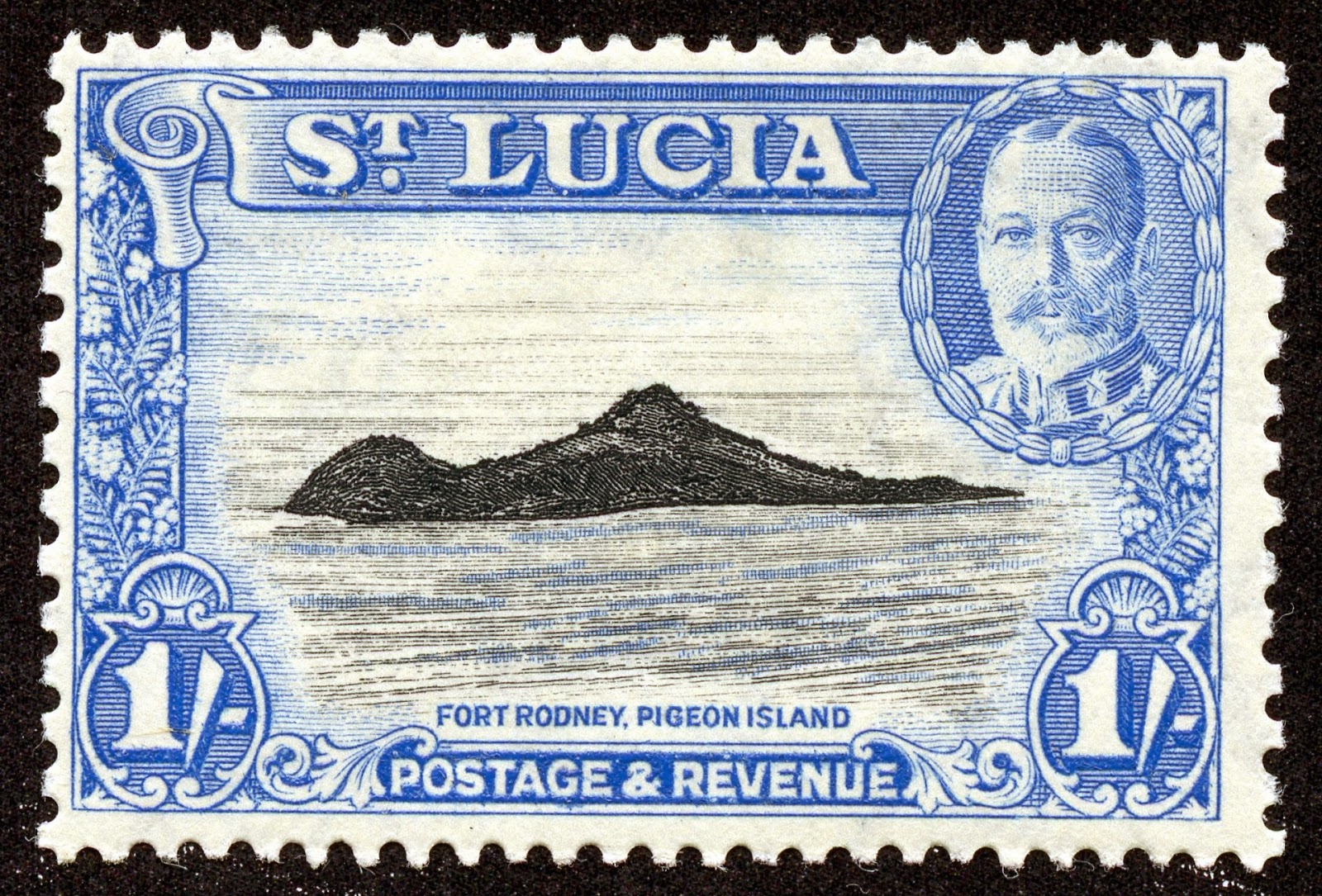 Observations
* BB avoids the more expensive issues by beginning coverage in 1883.
* There are only two stamps with CV $10+ needed to fill the spaces.
* As is usual for BB, the Edward VII and George VI keyplate issues are offered just one space, if there are two watermark choices.
* The "1938" issue was re-issued in different perfs ( and occasionally different color shades- see SG) between 1943-48. The minor numbers listed in Scott for the 1938-48 issue are the stamps issued in 1938. (Your choice if you want to be obsessive about this.) 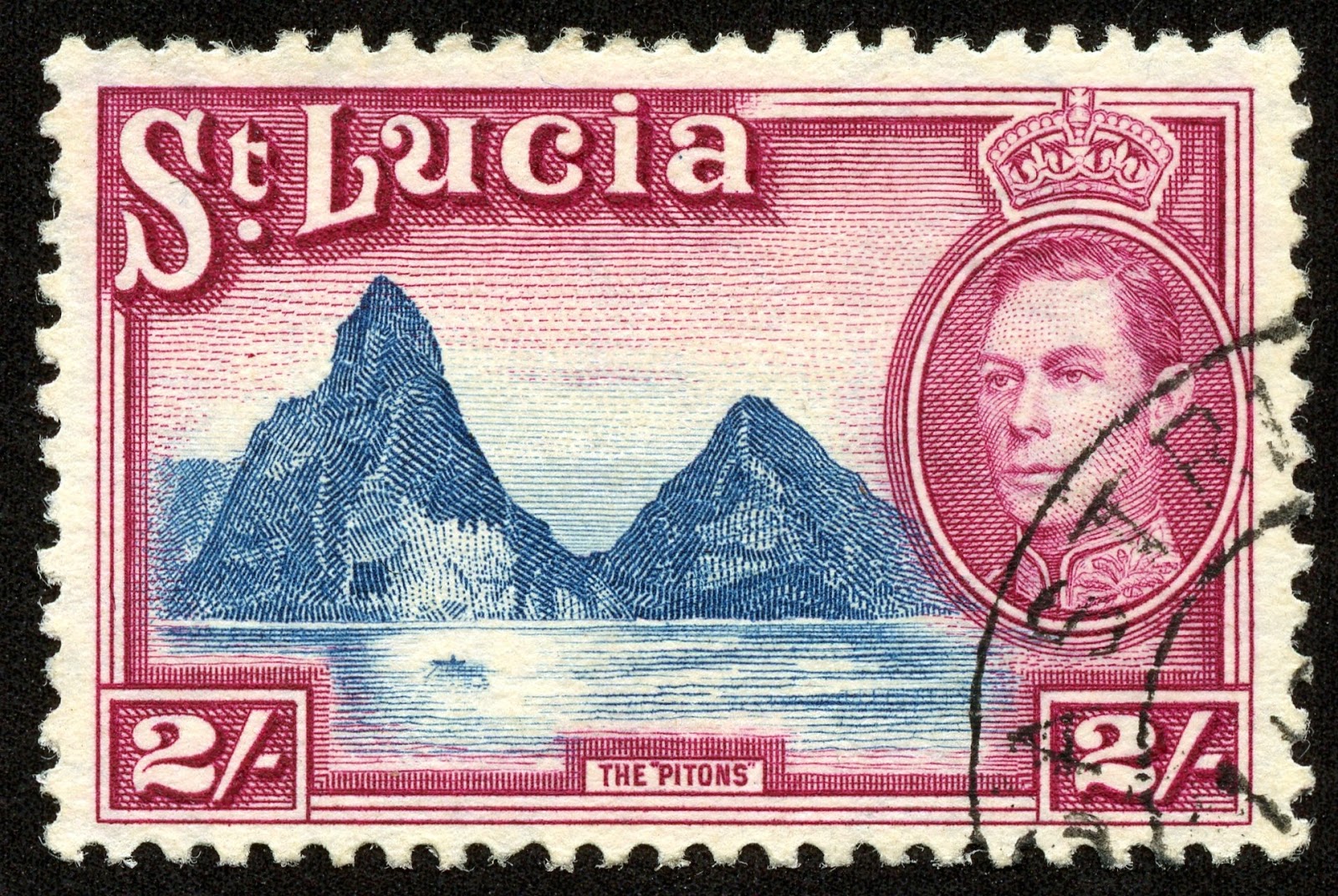 1938 Scott 122 2sh red violet & slate blue "The Pitons"
Out of the Blue
I don't know about you, but reviewing the stamps of the Caribbean island countries makes me want to take a trip to those languid shores. ;-)

Note: Maps appear to be in the public domain. Pic of St. Lucia is by Jim G. 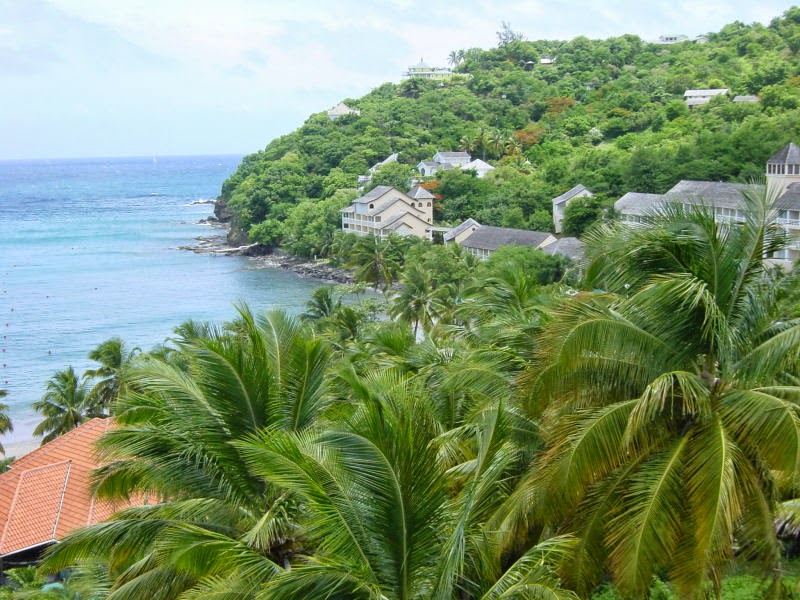 Feel the windward breeze?
Posted by Jim at 12:44 PM