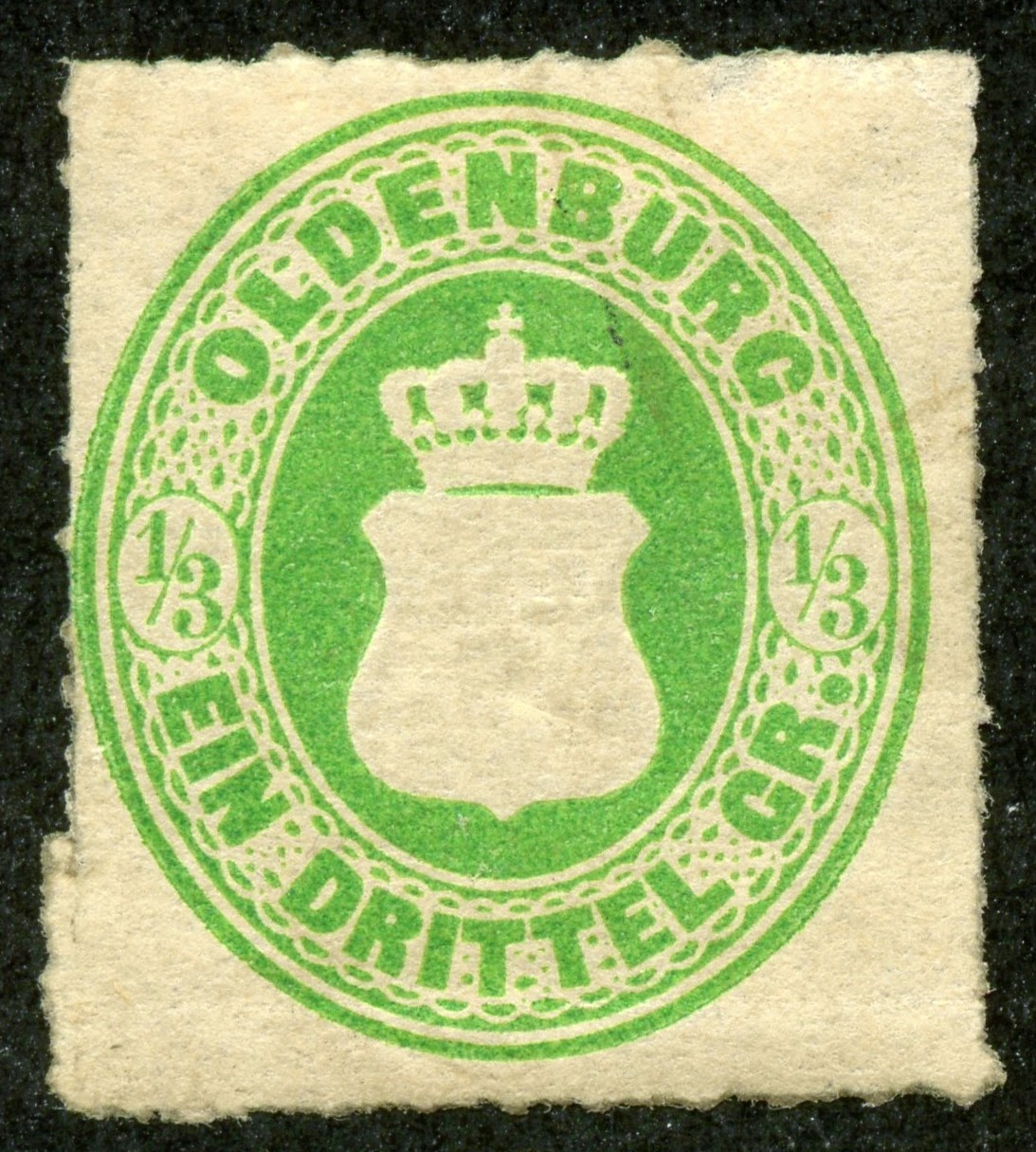 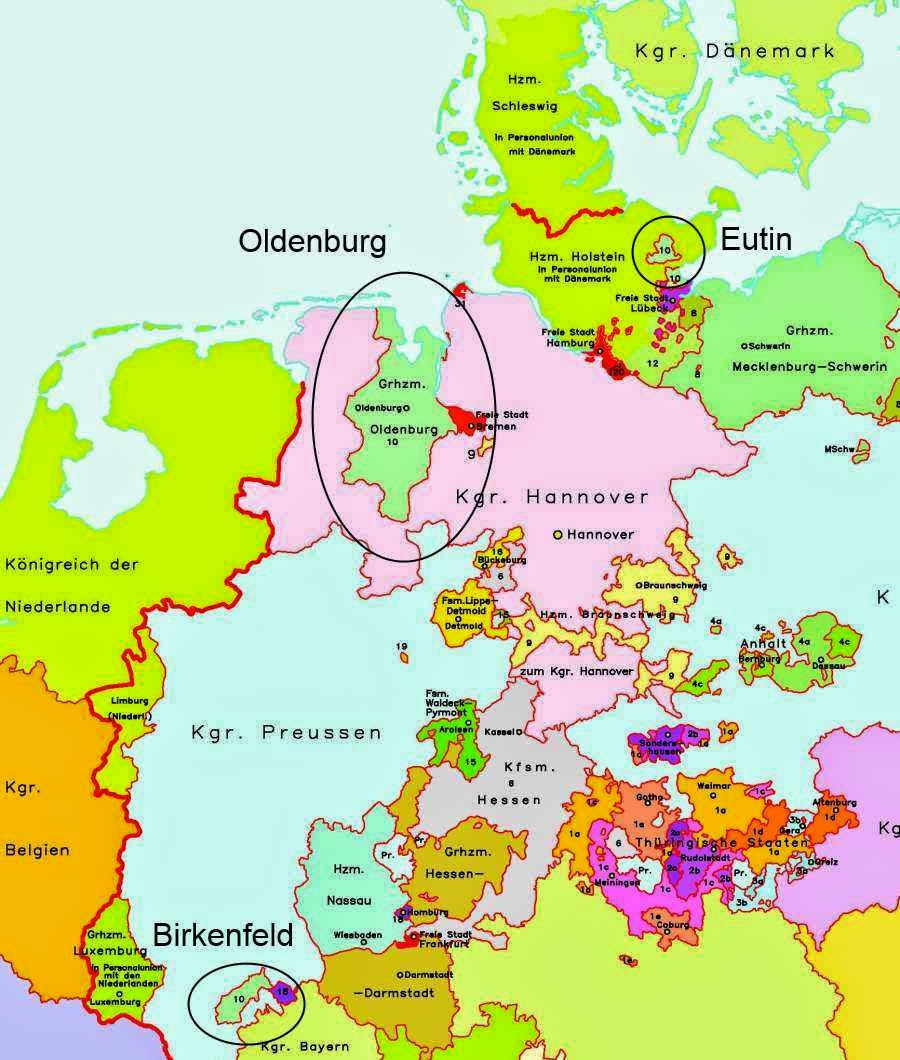 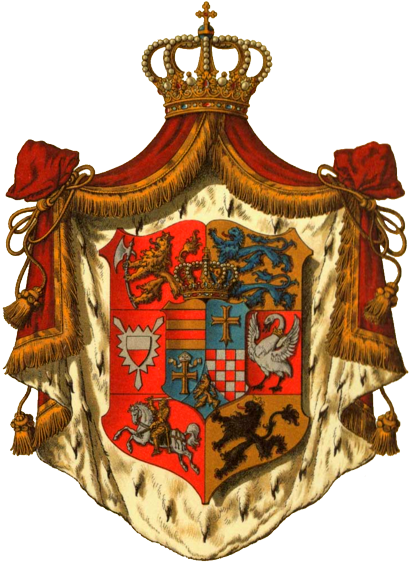 Oldenburg Coat of Arms
The Grand Duke Augustus ruled from 1829-1853. He granted an enlightened constitution for his subjects in 1849.

Peter II was Grand Duke from 1853-1900. In 1867, he joined in a military compact with Prussia during the Franco-Prussian War.

Into the Deep Blue
The 2011 Scott Classic Specialized 1840-1940 catalogue has, for Oldenburg 1852-1867, 24 major descriptive numbers. Of those, 10 are CV $8-$40, or 42%. Other values can range from the hundreds to the thousands. Although certainly not cheap, a collection can be formed  by the assiduous and frugal classical era enthusiast. 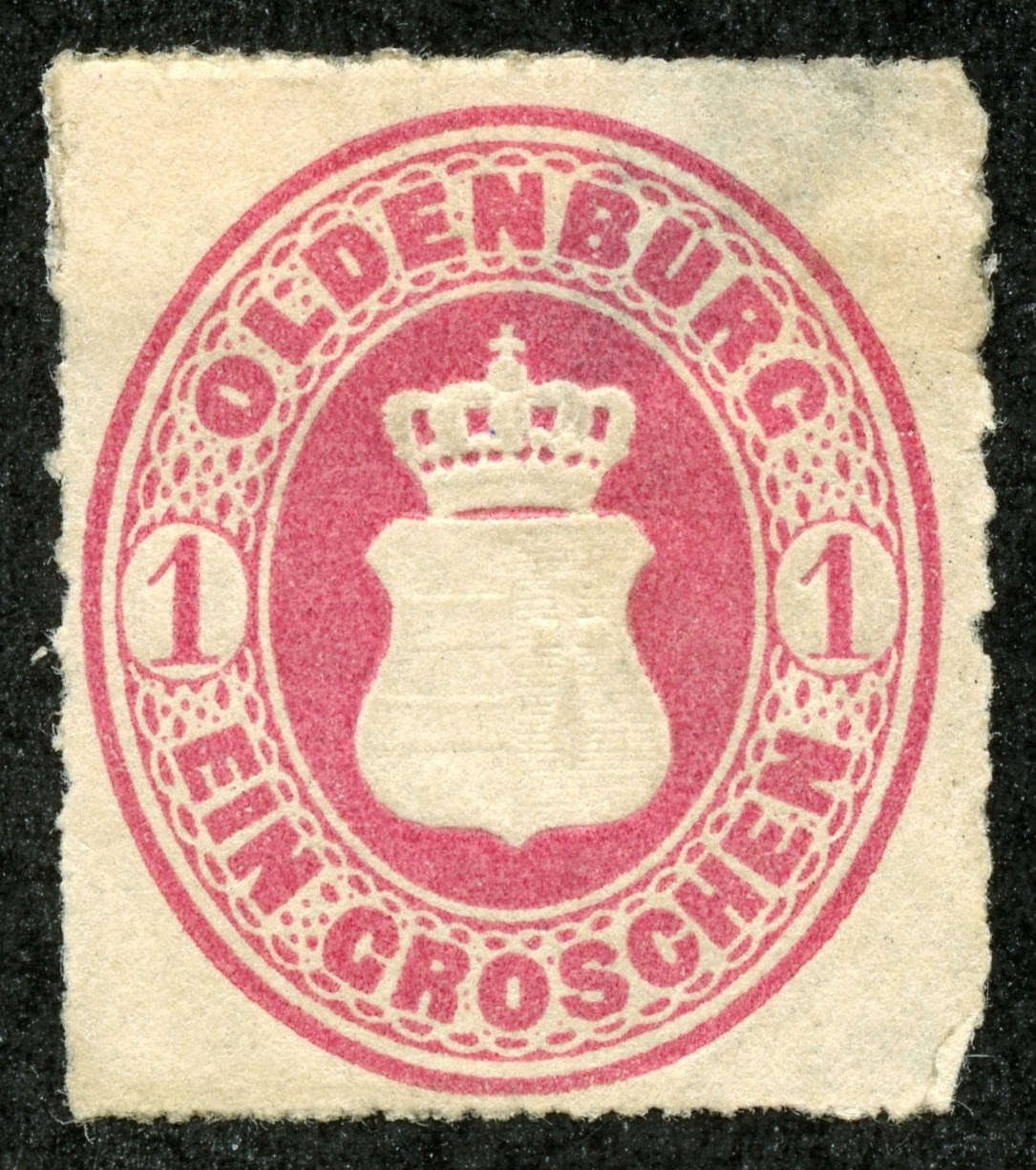 1867 Scott 23 1g rose "Coat of Arms"
Rouletted 10
There are five major stamp designs for Oldenburg during the 15 years of issues, but I have only one- the relatively inexpensive "Coat of Arms" design from the 1862-1867 issues.

An example of the 1867 embossed/ rouletted 10 five stamp issue is shown here. The other examples shown on this blog post are also from this issue. Unused (CV $8-$20) is much less expensive than used. The 1862 five stamp issue is essentially the same, except the stamps are rouletted 11 1/2, and have a higher CV.

North German Confederation stamps replaced those of Oldenburg on January 1, 1868. 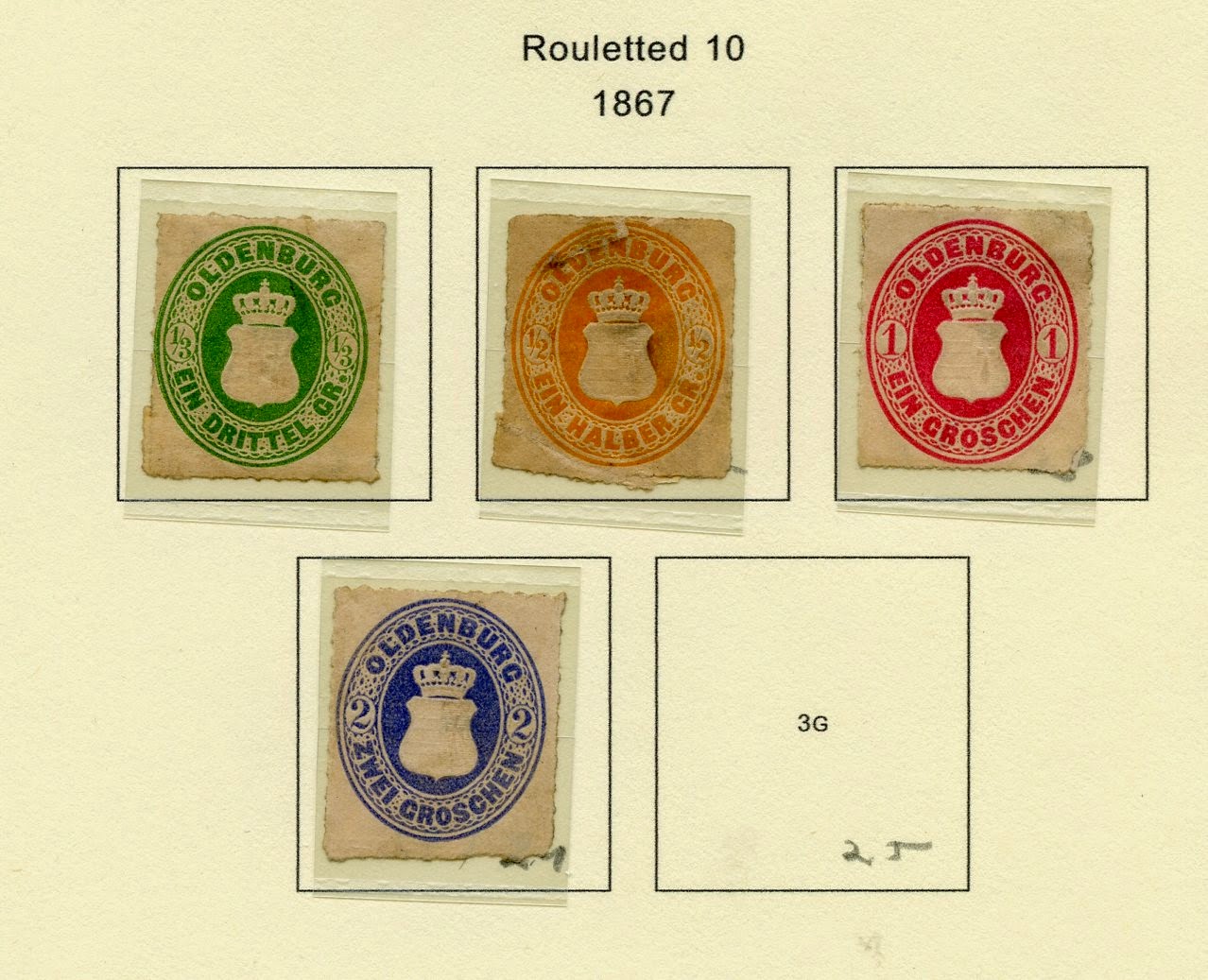 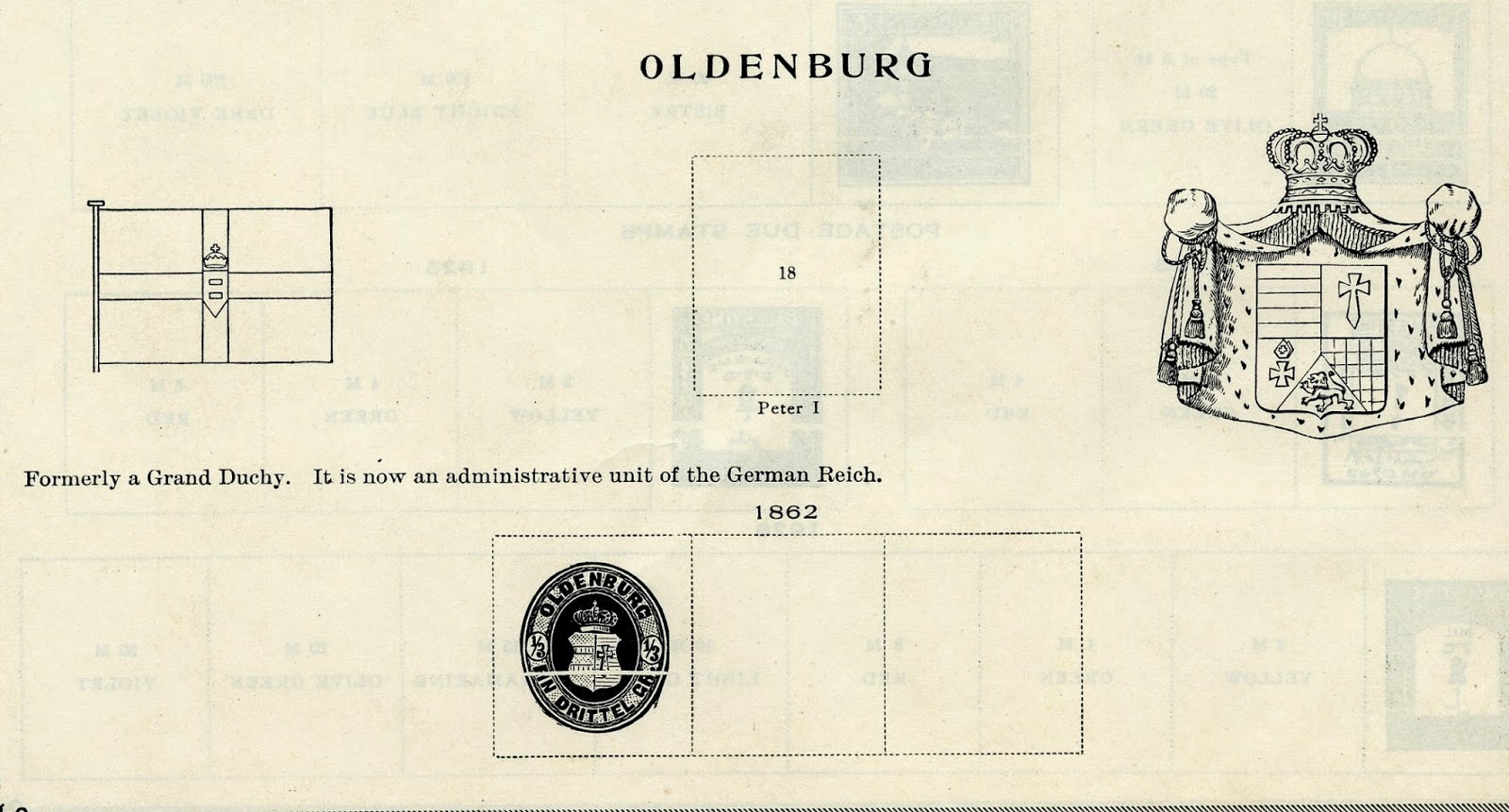 Oldenburg spaces in the '47 Big Blue
Big Blue
Oldenburg  was one of the German States that was removed by the '69 BB editors, but remains in the 1940s editions.

It is located on the same page as "Oltre Giuba", and just before "Palestine".

Fortunately, the three spaces are not too expensive to fill with CV $10+, $8, $8, and I am including the spaces in my virtual BB album. 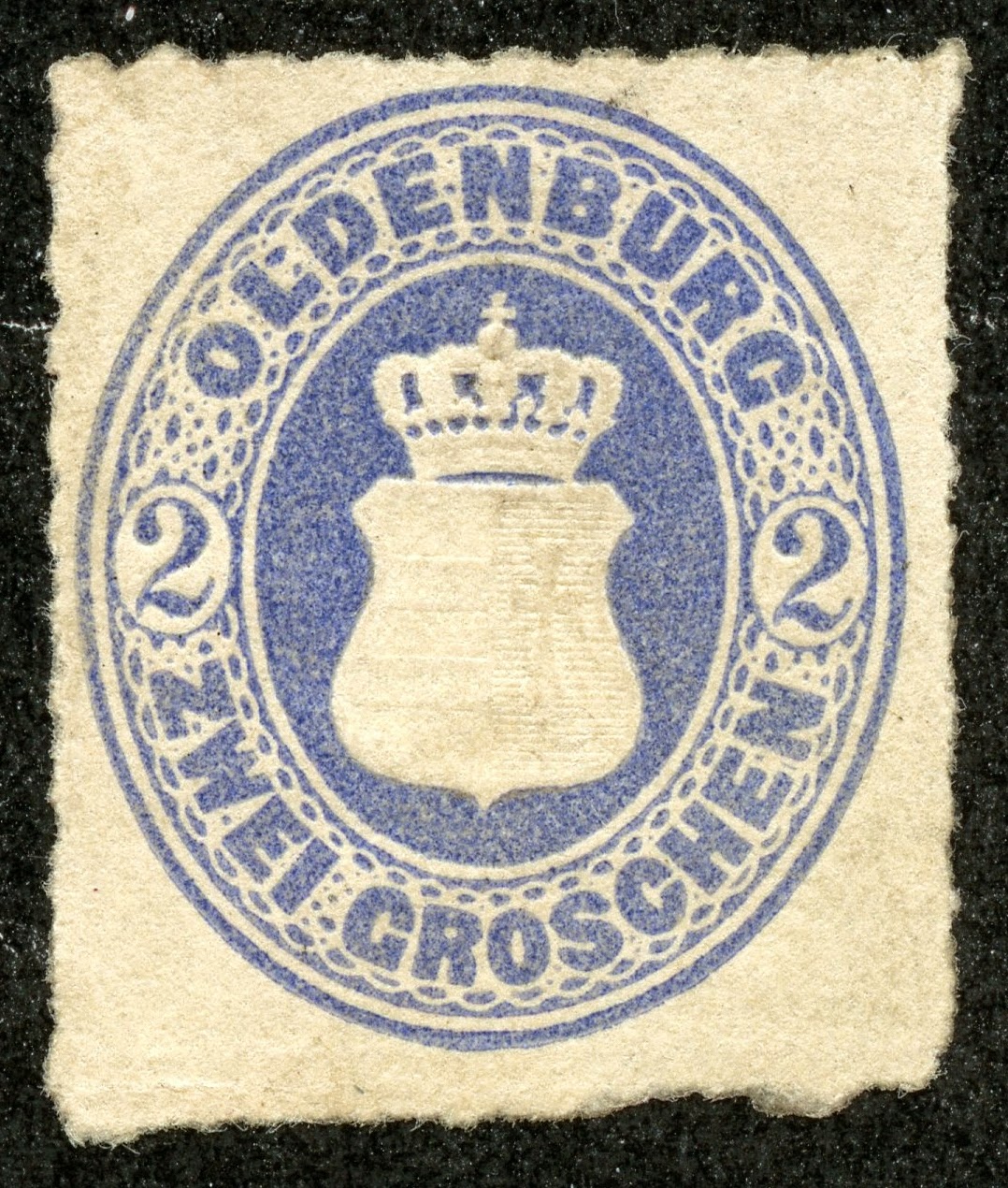 1867 Scott 24 2g ultramarine "Coat of Arms:
Out of the Blue
Mostly Saxon and Lutheran, the Grand Duchy of Oldenburg  became a very integral part of the North German Confederation, and then the German Empire.

Note: The Oldenburg Grand Duchy map is used by permission of Bee See from a post at Stamp Community Family Forum. Thanks Bee See! The "Coat of Arms" image appears to be in the public domain.

Note: The careful reader might wonder why the "Oldenburg" post is so late to be published? I confess I overlooked "Oldenburg" when originally preparing the "O" classical countries. Mea culpa.