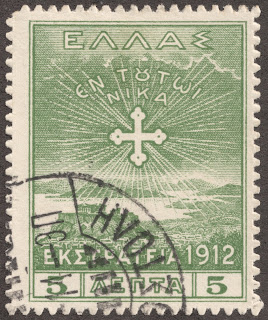 1912 Scott N154 5 l green "Cross of Constantine"
1912 Campaign
Quick History
This post will review the "back of the book" issues of Greece: namely  Air Post, the Postage Dues, the frequently used Postal Tax category, and the many stamps issued for "New Greece", the territory acquired during the Balkan Wars.

In 1912, the Balkan League (Greece, Montenegro, Bulgaria and Serbia) attacked Turkey as much of their respective ethnic populations remained under Ottoman dominance. 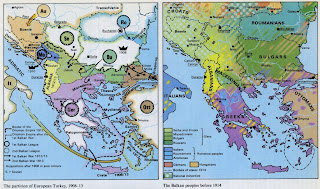 The source of the Balkan wars conflict
Different ethnic groups  wanting their own autonomy
Seven months later, Turkey had lost all of its holdings in the Balkans with the signing of the Treaty of London. But Bulgaria was not happy with their apportionment, and the second Balkan war ensued. With Macedonia, Serbia, Greece, Romania, and Turkey all aligned against it, Bulgaria lost most of the territories gained during the first Balkan war. 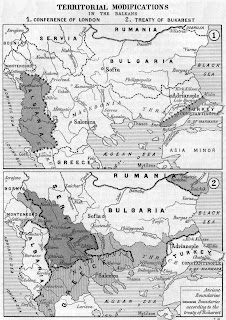 Territorial acquisitions after the first and second Balkan war
A highly successful result from the Greek perspective added territory from the Aegean islands, Thessaly, Epirus, Macedonia and Thrace. Consequently, overprinted/surcharged  Greek stamps were used in the territory, called 'New Greece", until the lands could be fully absorbed into Greece. 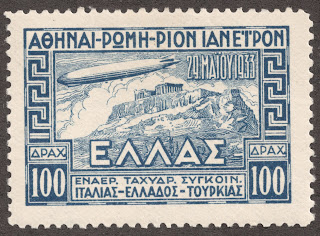 What is interesting about the Greek "back-of-the-book" categories is the frequent use of Postal tax stamps, and the large number of occupation/annexation stamps because of the Balkan wars. 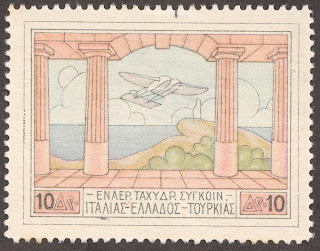 1926 Scott C4 10d multicolored
"Flying Boat seen through Colonnade"
Air Post initially was provided by the "Italy-Greece-Turkey-Rhodes" route, a service provided by "Aerospresso Italiana", as a contract with the Greek government. There were four "Patakonia" stamps issued  with CV between $1+-$20+. Quite a striking "Mediterranean" design. ;-) 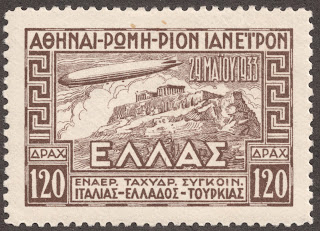 1933 Scott C7 120d dark brown "Zeppelin over Acropolis"
A three stamp "Graf Zeppelin" issue was produced in 1933. The stamps were issued by the firm "Aeroespresso Italia" on the occasion of the Graf Zeppelin LZ-127 flying from Germany to Rome to Rio de Janeiro. There was a flight from Athens that brought the mail to the airship via Rome. Of interest, the firm had the rights to put the unsold quantities after the flight onto the philatelic market. They must have done all right, because today the stamps have a CV of $10+-$50+. 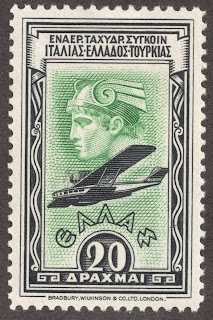 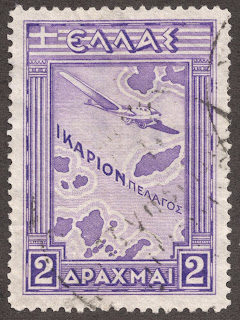 1933 Scott C17 2d violet
"Airplane over Map of Icarian Sea"
The Greek government General Air Post Service then became operational, and the above example is from the seven stamp issue. CV ranged from<$1-$5+ for five stamps. 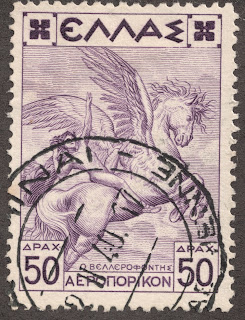 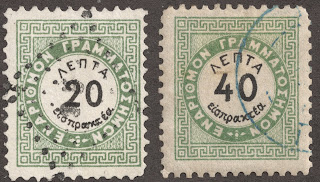 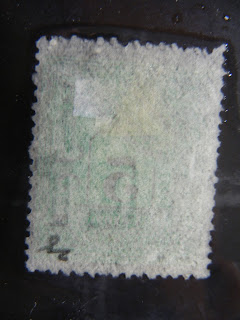 Wmk 129- "Crown and E T"
Found with the 1902 issue postage due
The "Crown and E T" watermark is quite striking, and should not be a problem to identify.

The second production, the 1913-26 Serrate Roulette 13 1/2 stamps, are engraved, and have sixteen stamps in the issue. CV ranges from <$1-$1+ for fourteen stamps. Colors are somewhat different for this issue. Since these stamps are engraved, the "aluminum foil-pencil eraser" test can be done to confirm. 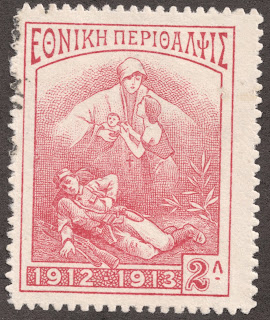 1914 Scott RA1 2 l red
"The Tragedy of War"
The first "Charity stamp", found in the catalogue under Postal Tax stamps, was intended for helping families of the Balkan war victims. Although  inexpensive (<$1), what a striking- and sobering- design.

What is the difference between Semi-Postals (often used in other countries to raise charity funds), and Postal Tax stamps?   Postal Tax stamps are mandatory for a fixed time period on all postal correspondence. 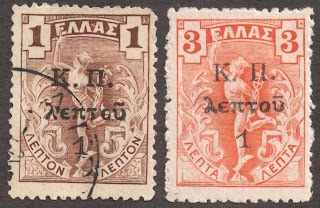 1917 Scott RA3 1 l on 1 l; RA6 1 l on 3 l: note thinner letters on 3 l
Surcharges on the "Flying Hermes" set
Imposed by the Athens government during the "National Schism"
During the "National Schism" the Athens Royalist government required that all postal correspondence have  surcharged "Flying Hermes" stamps applied. This eleven stamp set has a very modest CV of <$1-$2+ for all save one. Note that some of the surcharge overprints are in thinner script. 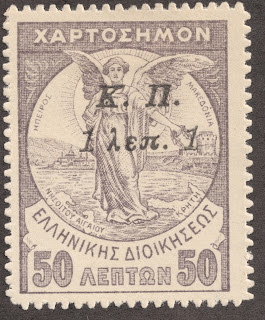 1917 Scott RA31 5l on 50 l violet "Victory"
Surcharged on Revenue stamps
Other stamp issues were likewise surcharged during the National Schism. The example above has the surcharge on a Revenue stamp.

1934 Scott RA49 10 l blue green, orange & buff "Health"
1935 Scott RA53 20 l ultra, orange & buff
1939 Scott RA64 50 l brown & buff
The use of these stamps was obligatory in the mail  four weeks each year, including Christmas, New Year, and Easter. These stamps, which were for the benefit of postal workers who had tuberculosis, were also required on Parcel Post at all times.

The first stamp (left) was printed in 1937. There then was the discovery that some of the OPs were inverted (Center). To prevent a philatelic bonanza, many more of the inverted OPs were issued. Today the regular OP is worth slightly more (25c) than the inverted OP (20c).

But the International Red Cross organization protested that their symbol was inappropriately used on these stamps, as these are not "Red Cross" charity stamps. Hence the "green" red cross stamp (right) was issued.

Now Scott does have a cautionary note about plentiful counterfeits. I noticed the 3 l vermilion (illustrated) is only known engraved. Yet my stamp is lithographed. ;-(   !  Quite suspicious. 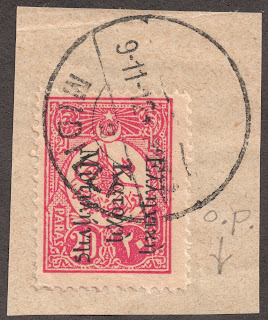 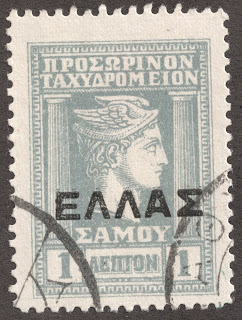 Samos 1912 Scott N81 1 l gray "Hermes"
The island of Samos were issued both regular and overprinted stamps (14 stamps) during the Balkan wars, and setting up the provisional government. CV ranges from $1-$7 for eleven stamps. 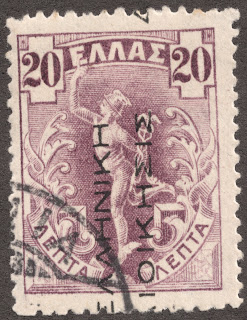 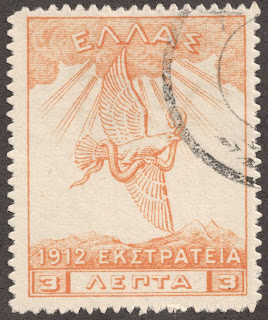 1912 Scott N153 3l orange "Eagle of Zeus"
"Campaign of 1912"
These stamps were only intended for use in New Greece, and included Macedonia, Epirus, and some of the Aegean Islands. The other design is the "Cross of Constantine" which is found at the post header. CV for these 16 stamps ranges from <$1-$4 for 10 stamps. 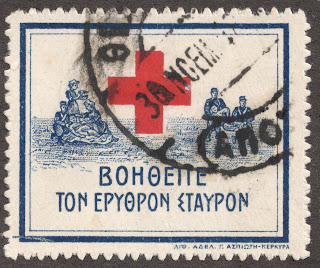 If one checks the "affordability" index for these categories....

It appears BB is generous with coverage of Air Post. The other categories? Not so much. ;-)

The 120d dark brown was CV $1.50 in my '47 Scott catalogue. According to the U.S. Inflation calculator, http://www.usinflationcalculator.com/ , the cost is equivalent today to $15.43. So indeed the price of the stamp(s) are higher than the inflation rate price.

C) Besides the above listed stamps, BB also includes six more stamps ($10+-$30) that are rather expensive. All are Air post, save for one postage due. The group is detailed after the checklist.

D) BB is up to its old tricks:  including the 1902-13 postage due issues, but excluding the cheap 1913-26 and 1930 issues. Since there is a very good chance the collector will have some of these stamps, either put them on a separate page, or change Big Blue's dates. ;-)

B) A (  ) around a number is a suggested blank space choice. 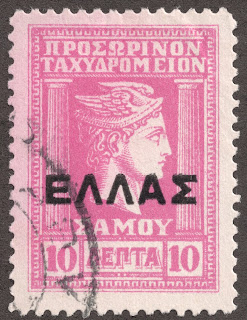 
Note: Maps appear to be in the public domain.