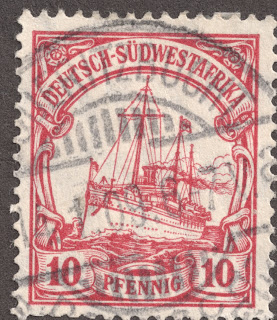 1906-19 Scott 28 10pf light rose "Kaiser's Yacht"
Postmark from Luderitzbucht
Quick History
German South West Africa was formed in 1884, all part of the "Scramble for Africa". But the Colony was disestablished in 1915 as it was invaded by the Union of South Africa ( part of the British Empire), and administered as South-West Africa. The Treaty of Versailles in 1919 made the mandate official. The territory became independent from South Africa as Namibia in 1990.

German South West Africa was the only German colony where German immigrants in large numbers settled. The economic lure was farming, and diamond and copper mining. There were 2,600 Germans in 1902, and 12,000 Germans by 1914. The Capital was Windhoek (established 1891), and the overall population was 94,000 in 1913.

The inevitable conflict happened, and German settlers were killed by the Herero natives. The Schutztruppe arrived, colonial protection troops, and guarded every water source. Many Herero and Namaqua (called collectively "Hottentots") died of thirst. The systemic genocide of 1904-07 killed 10,000 Namaqua (50%  of the population), and 65,000 Hereros (80% of the population). 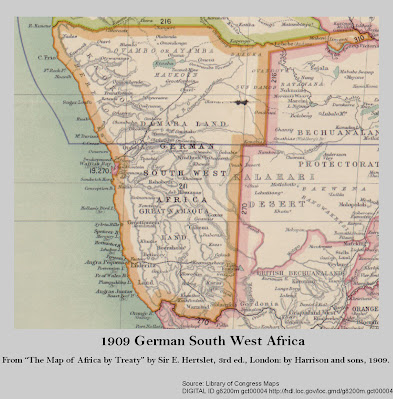 1910 Map German South West Africa
The Capital "Windhoek" can be found below the "GERMAN" label
Into the Deep Blue
The 2011 Scott Classic specialized catalogue has from 1897-1919, 34 major stamp descriptions for regular postage. All are of German colonial origin. Eighteen are valued @ <$6. Twelve for $1+ or less. "Affordability" is 53%. 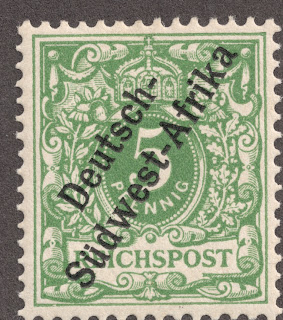 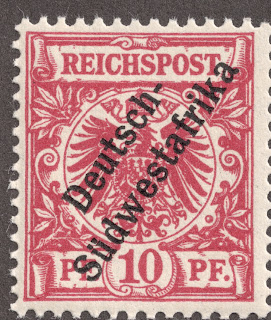 In 1900, the familiar "Hohenzollern" colonial design was produced. Of the thirteen stamps, Nine are $2+ or less. 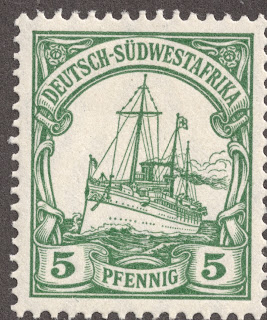 1906-19 Scott 27 5pf green "Hohenzollern"
This issue has the "Lozenges" watermark
Between 1906-19, the watermark "Lozenges" "Hohenzollern" stamps were issued. Four of the nine stamps are $1+ or less. The 3m and 5m denominations were never placed in use.

Deep Blue
The Steiner has two pages, and provides a space for all the major numbers.

Similarly, the 1900 and 1906-19 "Hohenzollern" issues, but differing in watermarking, are telescoped into one space.

Details are noted in the "comment" section below the checklist.

Comments
A) (  ) around number(s) indicate a blank space choice.

B) 1897-99 dates are for both 1897 and 1899 issues with different overprints. The "illustrated" spaces show the 1897 overprint. The "descriptive" spaces can be filled with either overprint. 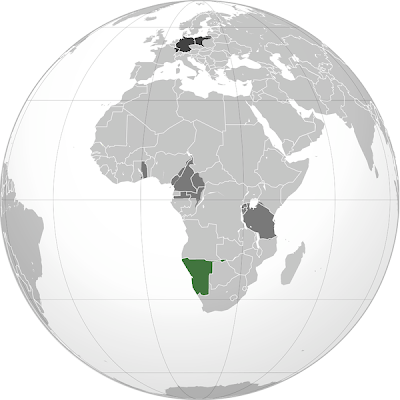 German South West Africa (green) on African Map
Other German possessions are in gray
Out of the Blue
Investigating the "Scramble for Africa" and the subsequent colonization can uncover historical facts that are stark and uncomfortable: the genocide of  1904-07.


Note: Maps, photo appear to be in the public domain.